The HA-69 is a world-class professional valve microphone; it’s a shame it’s only available as a knackered-looking relic. 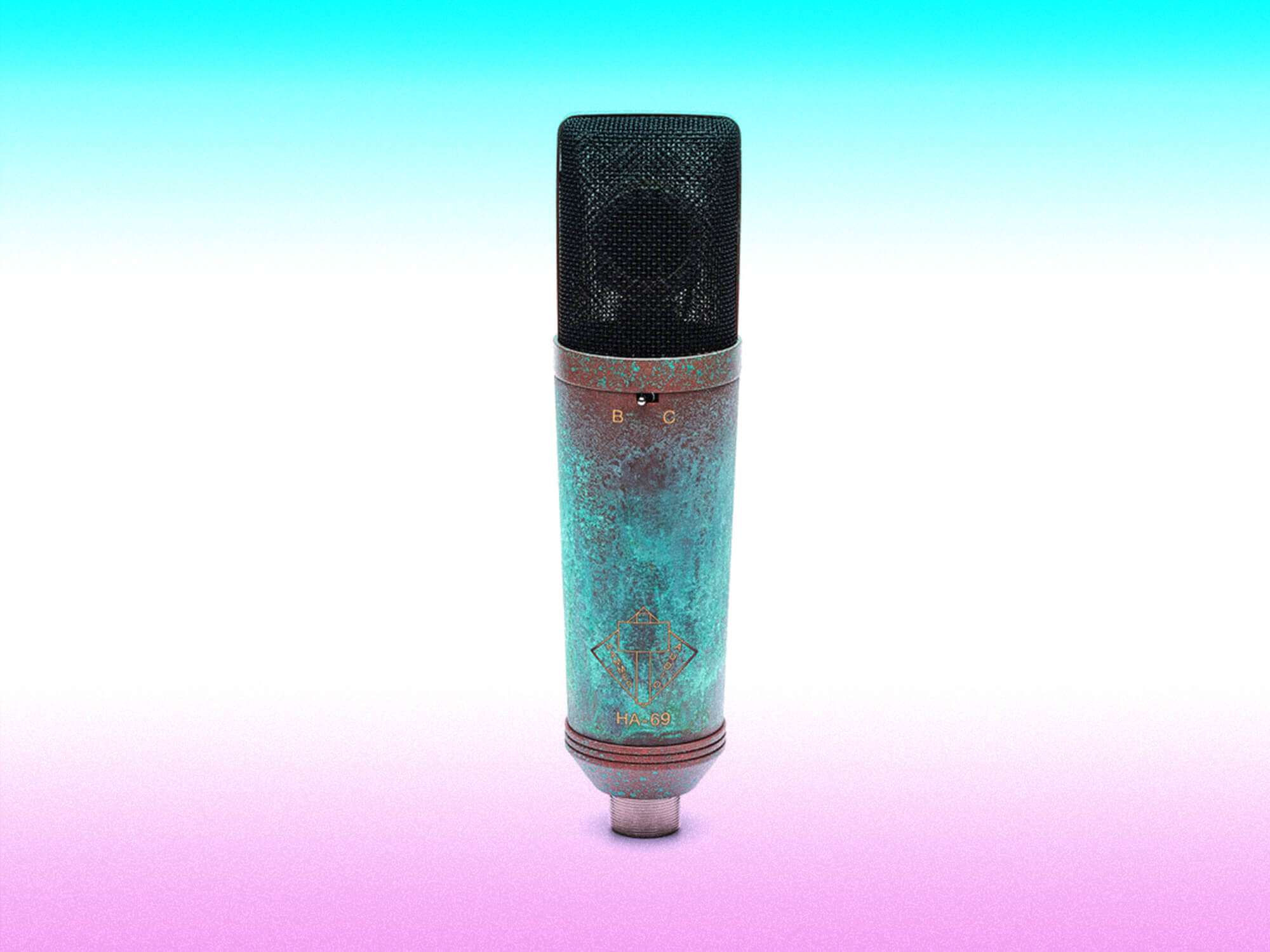 
[Editor’s note: This article previously reviewed the HA-69 at its original price of £3,500. Hammer Audio has since reduced the price to £2,999, which this article now reflects.]

In a world awash with both hardware and software either cloned from or inspired by classic gear, Hammer Audio takes the concept a stage further with the HA-69; it looks like a relic from a bygone age. Inside the tarnished-looking housing is a fully equipped, tube-powered large-diaphragm condenser microphone.

Unlike much copied or re-imagined gear that includes telltale numbers such as 76 or 87 to reveal their heritage, the 69 in HA-69 doesn’t appear to refer to a historic piece of kit; it’s certainly nothing to do with the old Helios Type-69 consoles. You’d have to reduce the number by 2 to get to the microphone some might believe provides the inspiration. However, the HA-69 is no clone of the legendary Neumann U 67. Hammer Audio does state, though, that the microphone “seeks to bring back the clear but warm and classic sound of the 1962-1973 German broadcast radio from the period when tube development was near its peak.” Make of that what you will.

It’s a feature-packed mic – or rather, it’s two feature-packed mics as the switchable B and C modes employ independent internal analogue circuitry. Hammer’s own Voicing Circuit acts as a broad mid-band lift and can be switched into either mode, so that’s four distinct tonal flavours available via switches on the mic. And that’s before you get to the 80Hz/180Hz low-cut options and numerous available polar patterns.

Built by hand in the UK, the circuits are point-to-point wrapped and soldered traditionally, while the internal valve (tube) is a new-old-stock CV4507, the military-grade version of the Mullard EC70. These are far more robust than standard tubes, with thicker glass to reduce microphony and withstand shocks, should the mic take a knock. You might be thinking, “it’s all very well having a premium, genuine 1960s NOS tube, but what about when it fails?” Well, Hammer Audio has secured enough of these to provide replacements if necessary. Along with the microphone, you also get its power supply – also sporting a distressed look – shockmount and proprietary cable, all housed in a sturdy carrying case. 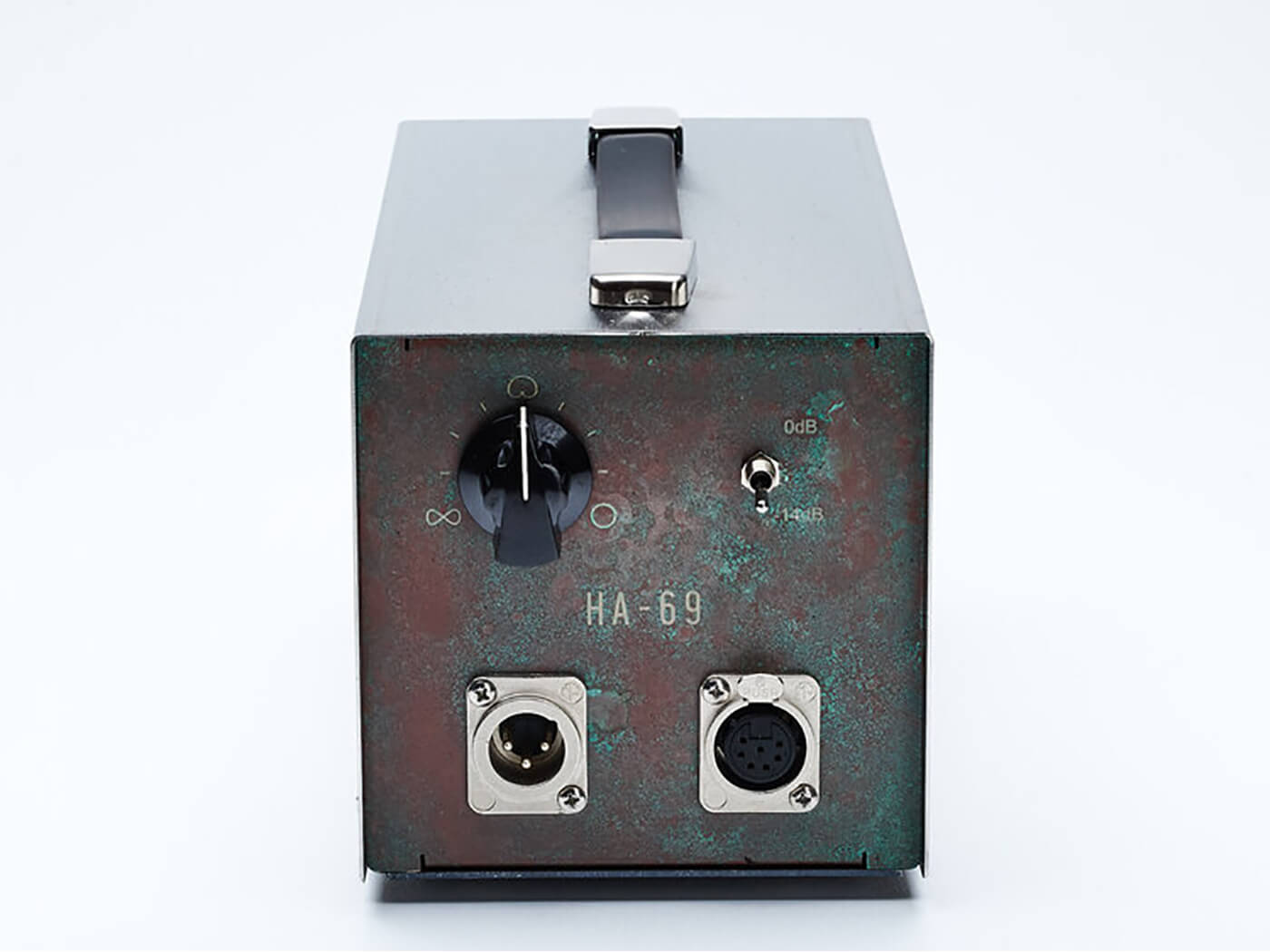 Before putting the microphone to use, we are slightly concerned that the two-mics-in-one configuration of the HA-69 could prove tricky when trying to nail the mic’s true character. The company’s blurb suggests the B mode has “a nice warm tube sound to it with warm lows and detailed high end’ while the C mode feels more neutral.” A vintage versus modern sound, if you will.

As it is, there’s not a night and day difference between the two modes, both expressing an unmistakable valve character. C mode is a tad more open through the treble region, with a sense of greater extension in the uppermost frequencies. By contrast, the B mode is more rounded, focusing attention on the broad midrange, while the true high-end is slightly more muted.

In both cases, the midrange is superb, with a hear-through quality that’s the preserve of only the best microphones. Vocals take on a creamy smoothness you only really get from thermionic devices. This, for us, translates as the warmth Hammer Audio mentions, rather than any hint of bloat or thickening of the lower mids. For that reason, we wouldn’t describe the HA-69 as particularly warm sounding, however, it’s a useful descriptive to indicate that the mic is in no way bright sounding. There is no hype in the upper frequencies at all and, as you would hope with a mic of this calibre, there are no audible resonances and honks, nor the scratchy and brittle treble that plagues lower-quality mics. 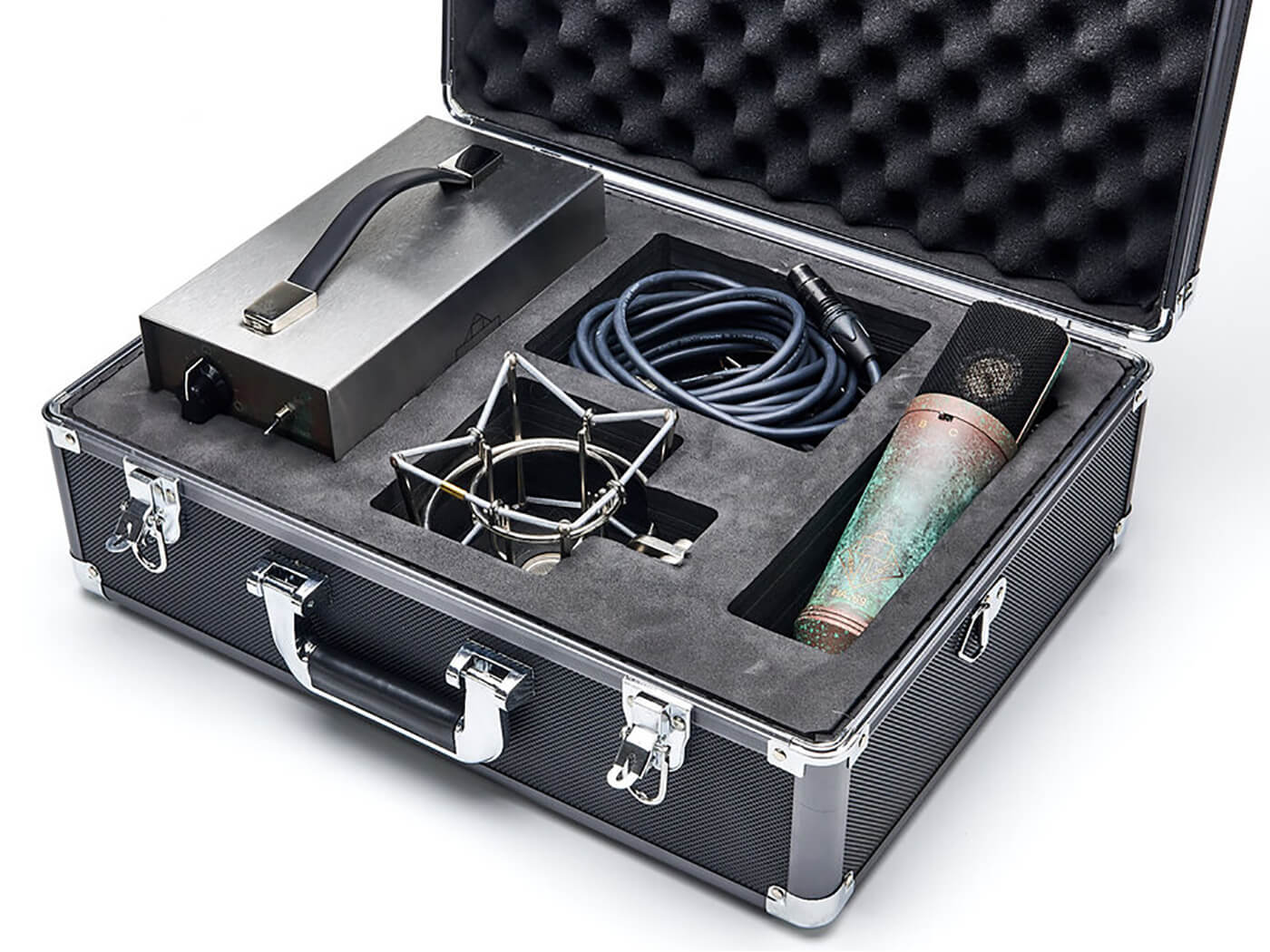 Should you actually want to hype your source signal, switch to the mic’s voicing circuit. It acts as a kind of presence boost that helps lead instruments and voices pop out of a mix. This circuit alters the character of the mic more so than switching between B and C modes, injecting a little midrange punch into the mix for a more explicit representation of audio.

Switching between modes and voicing circuits for quick comparisons is made easy with Hammer Audio’s soft-mute system, which prevents electrical pops and bangs that could potentially damage equipment further down the signal path. We would still recommend muting the output from your mic-pre though, just to be on the safe side and because it’s good practice to do so.

With all the tonal shaping available on the microphone, there is a suggestion from Hammer Audio that no external EQ is necessary. However, while that may be true up to a point, the HA-69 – especially in B mode – has just the right character that responds well to some super-top sweetening. A boost at 16kHz from a Pultec EQP-1A on a voice track has a wonderful effect; it really opens out the sound by building upon the mic’s glorious midrange.

It would be natural to assume that the classic microphone the HA-69 most closely resembles is the Neumann U 67. But a side-by-side comparison with our own U 67 reveals the two mics to be worlds apart. While the HA-69 has a smooth and sweet nature, the U 67 is darker in tone with a firmer low-end and fuller low-mids. In some respects, the soft, richly textured character of the HA-69 reminds us more of an AKG ELA M 251 style microphone, such as the Golden Age Premiere GA251. 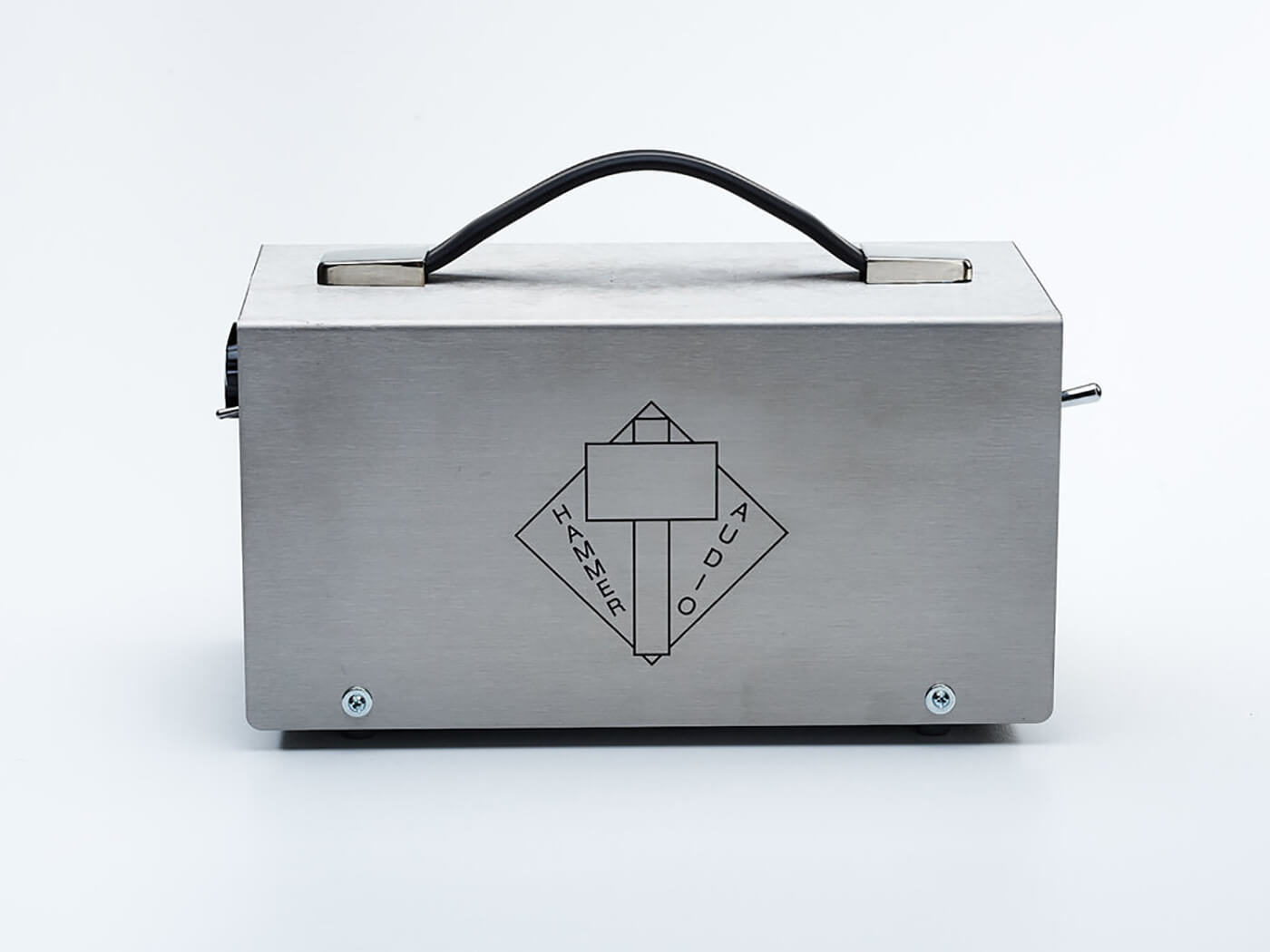 While the Steampunk-inspired copper finish is obviously a distinctive selling point, we have some serious reservations about it. We can fully appreciate why someone might want an artificially aged Fender Strat, made to look like it has had a busy working life since 1957. But the HA-69 looks as though it has suffered from neglect; you’d imagine the internal components to be completely wrecked.

This isn’t – or shouldn’t be – how a vintage microphone looks. Our vintage U 67 still looks pristine after decades of service.

On a professional level, we would hesitate to put the HA-69 in front of a world-class vocalist because its tarnished appearance invites comment. And when an artist is about to perform, the last thing they need to be thinking about is the provenance of the mic they will be using. Hammer Audio should consider making the HA-69 available without the ‘aged by the elements’ finish, as an alternative option.

Looks aside, we are impressed with the HA-69’s performance and versatility. Its creamy smooth sonic signature is sublime and the onboard tonal shaping options give it an edge over more standard one-trick-pony mics. At £2,999 It’s a fraction of the price of Neumann’s currently available U 67, yet you could buy two Golden Age Premiere GA251s for the money and still have change for a cool, vintage-style mic-pre or a trio of SM57s.