This red 8-input audio interface gives the green light to no-fuss recording with its quality converters and preamps. 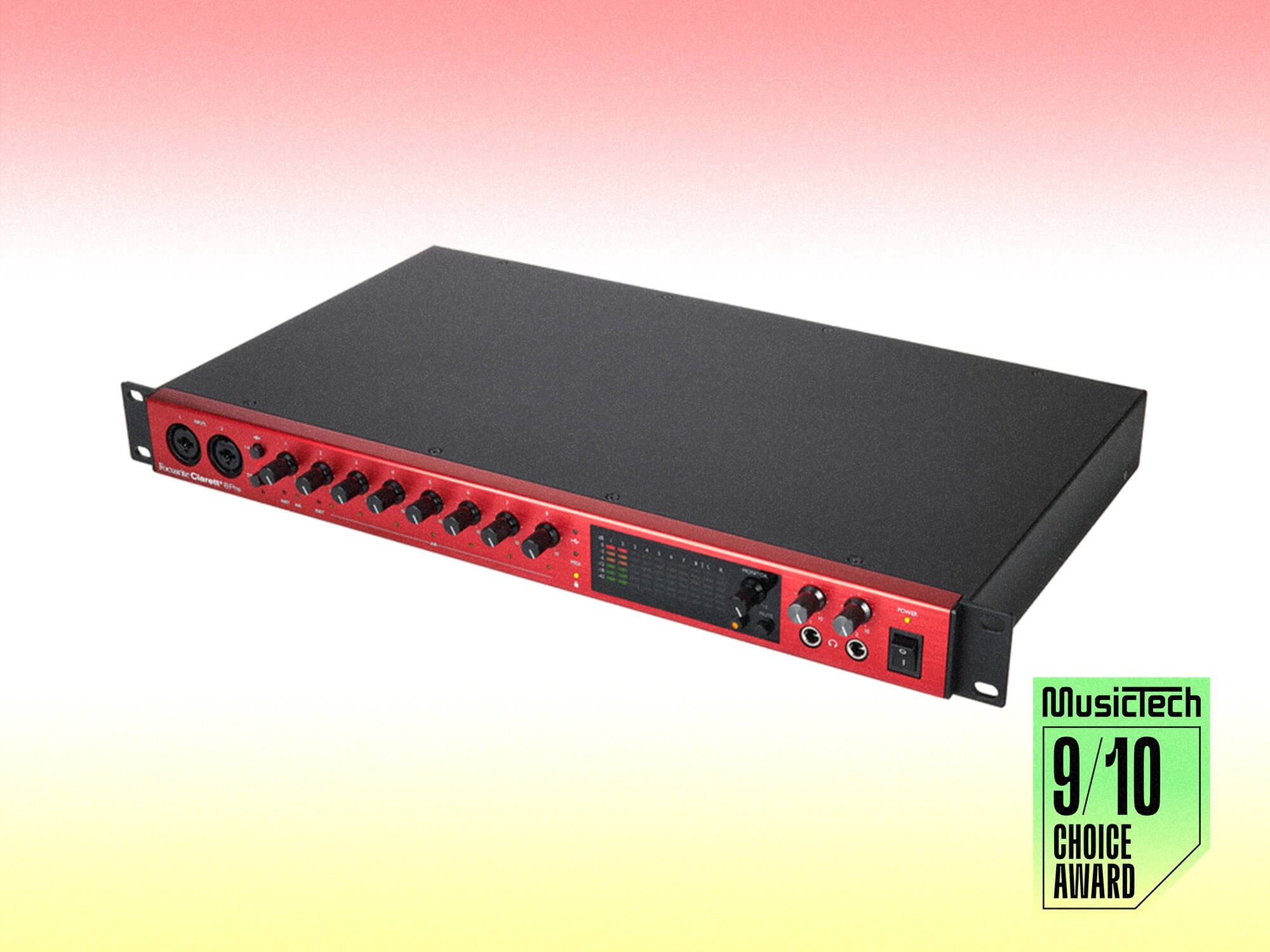 – Pre-amp gain a little limited
– Monitoring controls are too basic

The Clarett+ 8Pre offers eight glorious preamps and top-quality conversion. It’s simple to understand and operate but lacks the complex routing options, on-board DSP and monitor controller functions of some competing devices. Those wanting a no-nonsense way to get multiple mics and instruments recorded with studio level clarity will love this interface, while the useful bundled plug-ins sweeten the deal even further.


Focusrite’s popular Clarett series sits at the premium end of home recording gear, offering a step up from the ubiquitous Scarlett interfaces and veering comfortably into project studio territory. Recently updated with new converters, the new Clarett+ interfaces all build upon an established formula by offering additional dynamic range and less noise in almost every metric.

We had earlier reviewed the 2-input version upon its release, and are now putting the 8Pre through its paces as the 8-input format is an attractive prospect to those wanting to move beyond recording one or two channels at a time.

Sticking with tried-and-tested USB-2 for maximum compatibility, the new 8Pre comes boxed with not one, but two different USB cables. There’s also support for all the latest operating systems including Apple’s M-series chips.

Out of the box, first impressions are very reassuring. The smart brushed aluminium front panel and all-metal case is complemented by a series of really sturdy controls, apart from a couple of slightly wobbly switches in the monitor section. The build quality is superb and is a definite improvement upon the early incarnations of Scarlett interfaces that had rough, sharp edges. Panel layout is extremely intuitive, with simple preamp controls, clear LED metering, and monitor and headphone controls on the right.

As the name suggests, the 8Pre features eight combination mic/line pre-amps, each offering up to +57dB of gain and with phantom power arranged in two blocks of four input channels. Combi sockets for the first two inputs are located around the front since these are assignable as either mic, line or instrument level.

Each input includes a proprietary analogue Air circuit that emulates the sound of Focusrite’s ISA 110 mic preamp, changing the impedance and adding a boost of 4dB at the high end of the frequency range. This function is turned on in software rather than pressing a button on the preamp section; however, a corresponding LED below each gain knob plus a satisfying relay click both indicate that Air is engaged. Aside from this, pre-amp controls are very basic – just a gain control for each, with no high-pass filter or polarity switch. Simplicity is key here, and it works for almost all situations.

Moving to the other side of the meters, we have a main monitor level knob that can be assigned to an individual output pair, or all outputs simultaneously – very handy for surround mixing, for example. Dim and Mute switches are also included (again assignable to all outputs if required), but there’s no talkback or a quick way to A-B between different sets of monitors. Helpfully, two headphone pre-amps are included, each of which can have a different foldback mix; however, they are hard-linked only to output pairs 7-8 and 9-10 respectively. We don’t suppose many users would be buying this interface for complex digital mixing/routing applications, so this shouldn’t pose too much of a problem.

Around the back are the remaining combi input connectors, plus ten line outputs with the first two assigned as the main monitor pair. For users wanting to add external, boutique mic preamps into the equation, there’s unfortunately no way to bypass the variable gain stage of the internal preamp; you’ll need an interface with dedicated line-ins or insert returns to achieve this. On the digital side of things, there is single bank of ADAT in/outs for expanding the number of inputs/outputs, word clock out for synchronising devices, a stereo SPDIF in/out plus MIDI in/out (a handy LED on the front panel shows MIDI activity).

The Focusrite Control app takes care of settings, including an intuitive digital mixer for setting up levels and various foldback mixes. Oddly though, some pre-amp controls (like the Air button and line/instrument toggling) are on a separate tab in the app, making the experience less immediate. An iOS variant of the app is also available, offering Wi-Fi control when connected to the same network as the host computer. Once again, simplicity is key here. There are just level and pan controls for each directly monitored input signal, devoid of on-board effects in the foldback path or indeed any new-fangled loopback options. The plug-in bundle that comes with every Clarett interface is worthy of mention. Most notable is the Brainworx bx_console Focusrite SC – a premium emulation of an ISA 110 channel strip that can be used to add dynamics processing (including a de-esser), smooth analogue flavour EQ, plus flattering saturation. The plug-in (which usually costs $349 alone) is a great starting point for isolating and shaping sounds with almost everything they need, save for a spot of reverb.

Speaking of reverb, the bundle keeps on giving with its Essentials version of the Relab LX480 Lexicon emulation. Other highlights include the Red 2 and Red 3 compressor/EQ bundle and the choice of one instrument from the Addictive Keys sampled piano collection; we selected and really enjoyed the Modern Upright for adding organic chordal sounds to our mixes.

In session, the Clarett+’s quality really shone through. Converter clarity was immediate and headphone amps offered plenty of volume. With mics plugged in, the Air circuit gave a unique sense of analogue character and colour to our flat-response small diaphragm condensers when capturing stringed instruments. Air also brought our bog-standard SM58 to life, improving vocal clarity no end and sounding much closer to a condenser than a dull dynamic. The high frequency lift made the signal easier to hear and more flattering in foldback mixes, introducing the kind of processing you’d invariably reach for later when mixing anyway, but instead in the analogue domain. Sounds can be shaped to be closer to the finished product on the way in. This is also useful for intelligibility when using the mic inputs for live streams and online meetings.

We enjoyed the refreshing simplicity of the control software, despite the tab switching to get to the Air buttons. It was easy to get up and running in seconds, avoiding the complexity of mixing and routing introduced by many other manufacturers. Having an iPad control the foldback mix while the DAW was on the computer screen worked perfectly – this saved us the trouble of constantly switching screens when working on a single-screen setup. It’s also particularly invaluable in online meetings to quickly mute the mic. Meanwhile, bare-bones monitor controls work well for the most part, but it’s strange that there’s no button to check the mix in summed mono or A-B monitoring between different speaker sets.

One final quibble is that the pre-amp gain doesn’t really extend upwards enough to comfortably handle the likes of the gain-hungry Shure SM7B without becoming a little noisy or running out of headroom when maxed out. By way of comparison, our own Audient preamps with a few more dB of gain available to them perform more quietly. Users might need to invest in a suitable in-line booster for this type of mic to be on the safe side when using one with the Clarett+.