Multitap delays have been around since the 1960s, but UltraTap takes the idea much further with limitless taps and a wide range of modulation and tone-shaping controls. 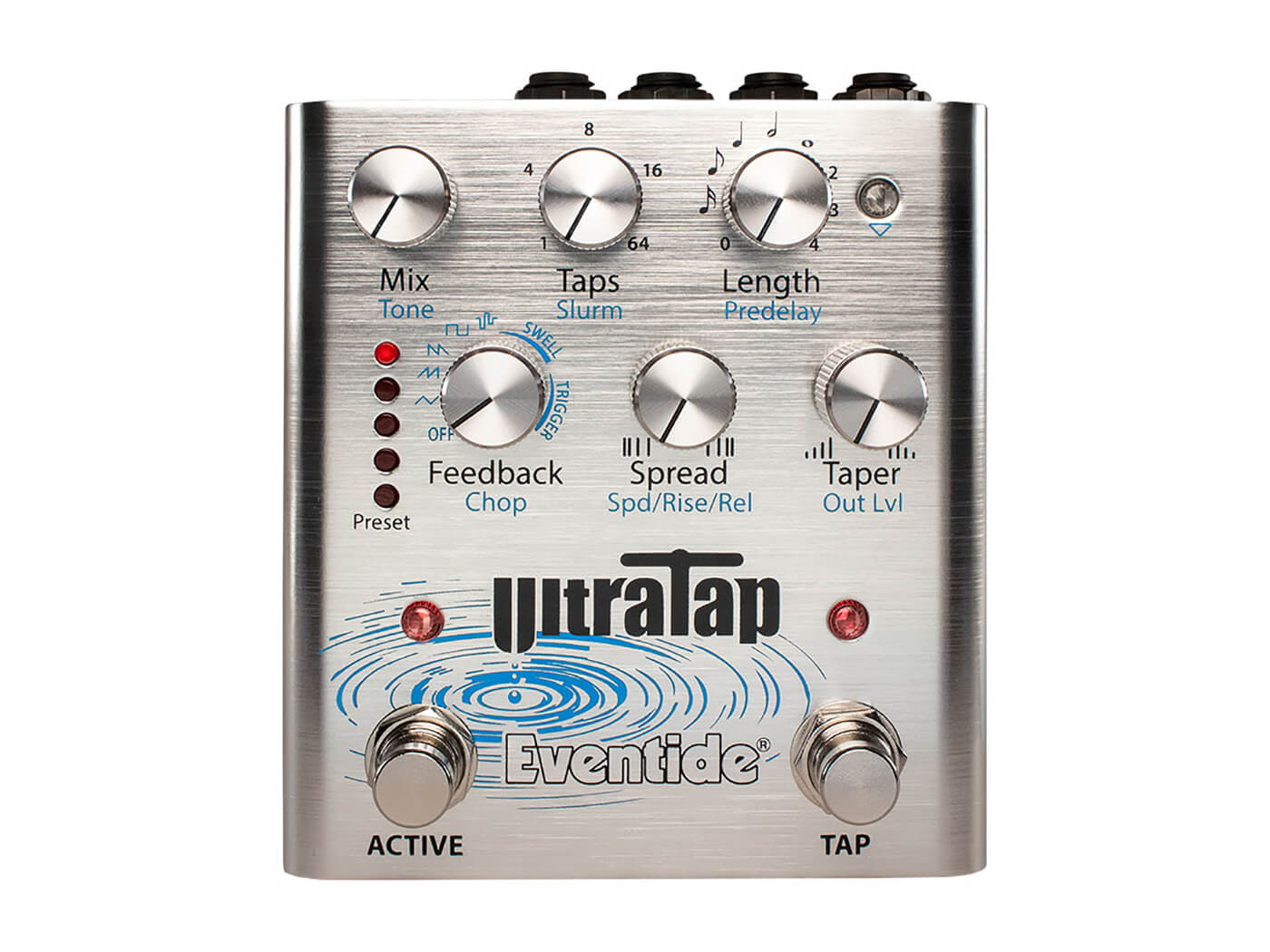 The UltraTap is an excellent delay pedal that covers a wide range of sounds. Although capable of super clean delay effects, it excels at ambient sounds that blur between delay and reverb.

The UltraTap delay pedal has an impressive lineage. Its roots trace back to 1981 – when digital effects were in their infancy – and a box made by the pioneering Eventide called the SP2016 Effects Processor. The SP2016 included two multitap algorithms, the Digiplex and the simply named Multitap Delay.

However, the UltraTap name first appeared in the H3000 rackmount effects processor. The UltraTap algorithm was developed and expanded in the H9000 and the H9 multi-effects stompbox. Eventide has now launched the effect as a standalone stompbox: the UltraTap pedal.

The UtltraTap is a dual footswitch pedal in a brushed metal case. The pedal is solidly built and should withstand repeated stamps from even the most heavily booted musician. It comes with a PSU with a range of international connectors, a quick-start guide and a range of preset cards that slip over the controls to allow newcomers to find some useful sounds immediately.

The rear of the pedal features a mono input, stereo output and expression pedal jack sockets. There are also switches for selecting mono/stereo and line or instrument level, a nod to its applications as a hardware insert or synth effect.

The preset cards get us up and running, and the first preset includes an extraordinary 64 separate taps. To put that into context, a tape delay can sometimes have up to four separate heads) and begins to blur the lines between delay and reverb.

Many of the controls are familiar to delay pedal users: time, feedback and mix (wet/dry). The UltraTap has a staggering delay length of up to four seconds but can also be subdivided into musical notes if that’s easier to understand. The pedal has a tap tempo function for synchronisation with a recording project or live act. The feedback control is a simple knob from 0% on the left and 100% on the right. With it fully turned clockwise, it’s possible to get the pedal to create endless feedback when combined with the Taper control. Still, no matter what we turned, we couldn’t get the UltraTap to fully self-oscillate in the way that other delays will when forced to feedback on themselves.

The Taper control, mentioned above, is one of the two controls that shape the taps. With the Taper control mid-way, each tap is a constant volume and loses no quality (it’s a digital delay, after all). But, by turning it clockwise, each tap gets progressively quieter as the feedback signal bleeds away, a feature on most delays. The most exciting part of this control is that turning counterclockwise causes the delays to fade in and get progressively louder. This function is particularly handy for creative sound design.

The other unusual sound-shaping control is the Spread knob which adjusts the duration between taps over time. Gaps between taps can get progressively shorter or longer, depending on the knob’s position. Combining the different number of taps with the feedback, taper, and spread controls makes it possible to get the delays to do almost anything. 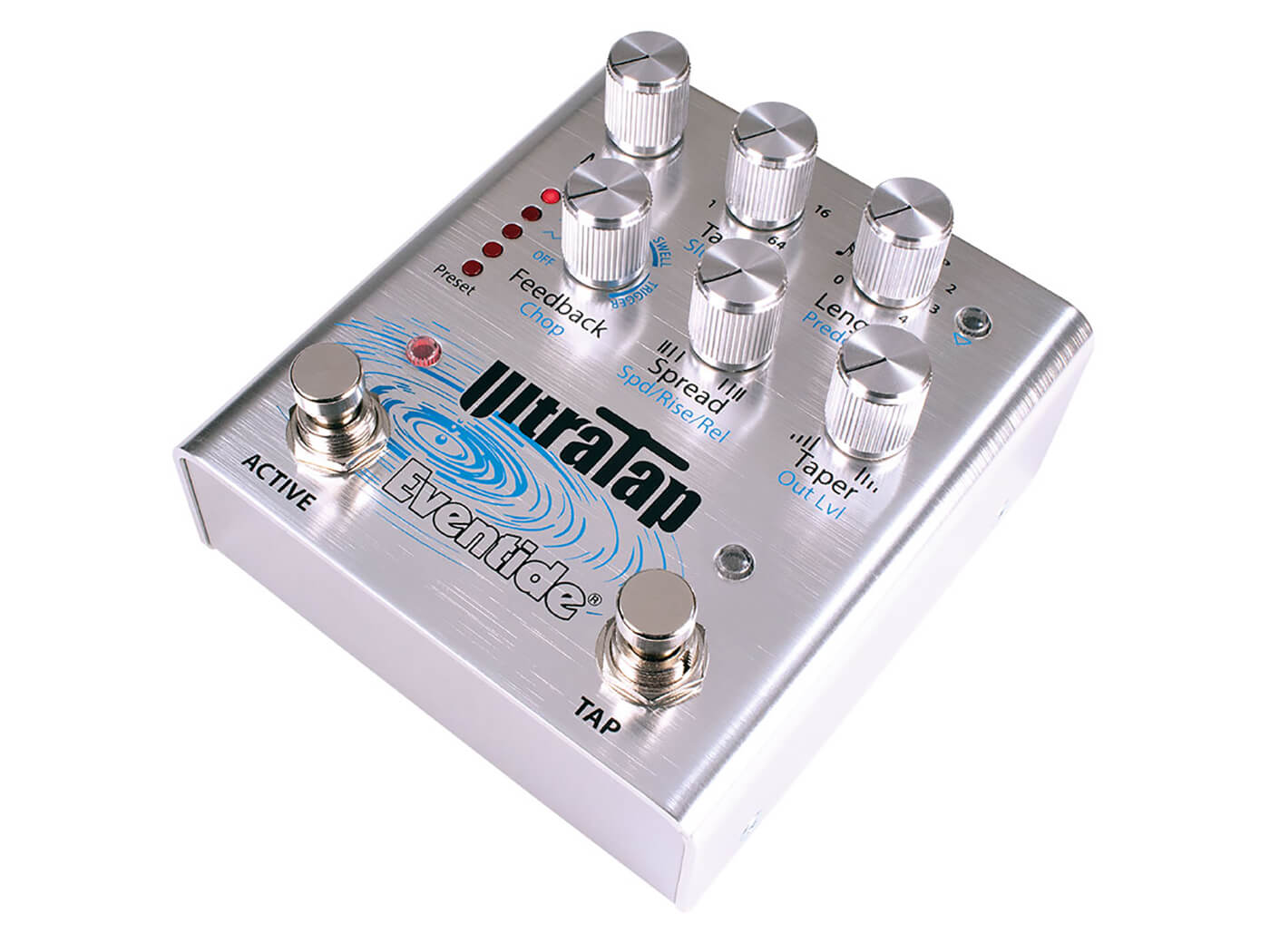 As with Eventide’s other stompbox pedals, the UltraTap features a second layer of controls, accessed by pressing the backlit button in the top right. These secondary controls, denoted in blue writing, are more artistic and turn the UltraTap from ‘just another delay pedal’ into a textural monster.

The gloriously named Slurm control blurs the delay taps together to create something more akin to reverb. This is one of Ultratap’s stand-out features, inviting much experimentation. It’s an ideal tool for creating washy pads to fill out space in a mix or turning a piano into an ambient dreamscape.

The other vital sound-shaping tool is the Chop function that modulates the delayed signal’s volume. Essentially this is a very well-equipped tremolo function. As you might expect for a tremolo, there are the standard LFO waveshapes, including triangle, ramps and the welcome addition of a Random Sample & Hold. Eventide has also included a Volume Swell function and a Trigger function for extreme gating. We were particularly pleased to see the swell control because this is a sound that we frequently use. The ability to lose the attack of a sound and create a pad from note tails, delay and ambience dramatically expands your sonic repertoire.

The Spd/Rise/Rel control is linked to the Chop control and what this knob does depends on which Chop setting Is selected. Essentially, it’s a speed control – it affects the rate of the LFO, the ramp speed of the Swell and the Release length of the Trigger option. Longer times were preferable to our ears, creating longer, washier sounds.

The UltraTap is a very powerful delay machine – this thing can create perfect repetitions of a signal and act as a ‘traditional’ multitap delay. However, there are more tricks up UltraTap’s sleeve. The formidable controls over taps and shape mean this pedal can double as both delay and reverb. In addition, its 127 preset slots mean that the UltraTap could be the only delay pedal you need for a wide variety of situations. The functions on the UltraTap take a little while to get your head around – but once mastered, it doesn’t take long to dial in the ambient sound you want. 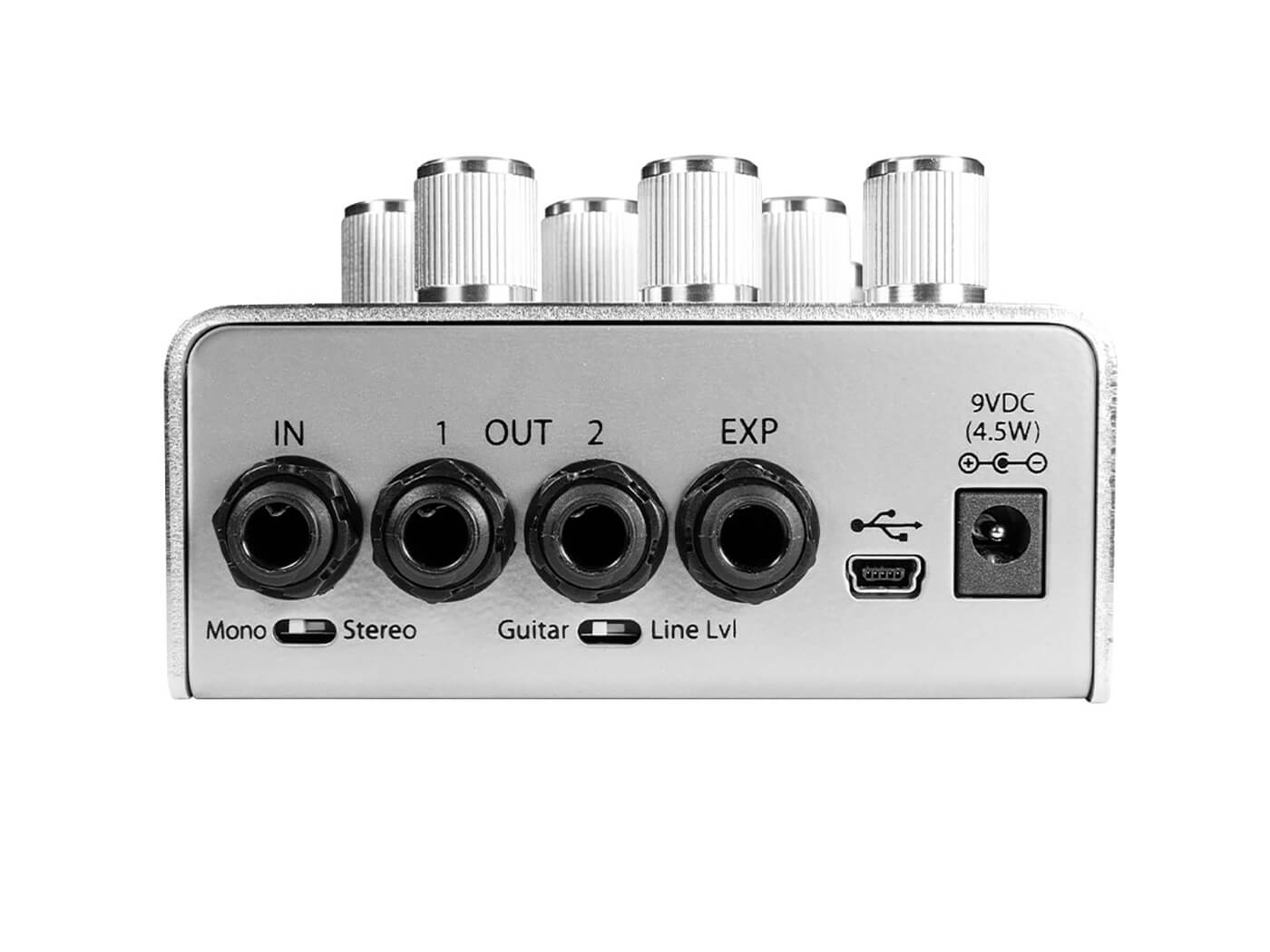