This portable time machine wears its nostalgia with pride and will leave you anything but sleep. Does Dreadbox’s latest have us under its spell? 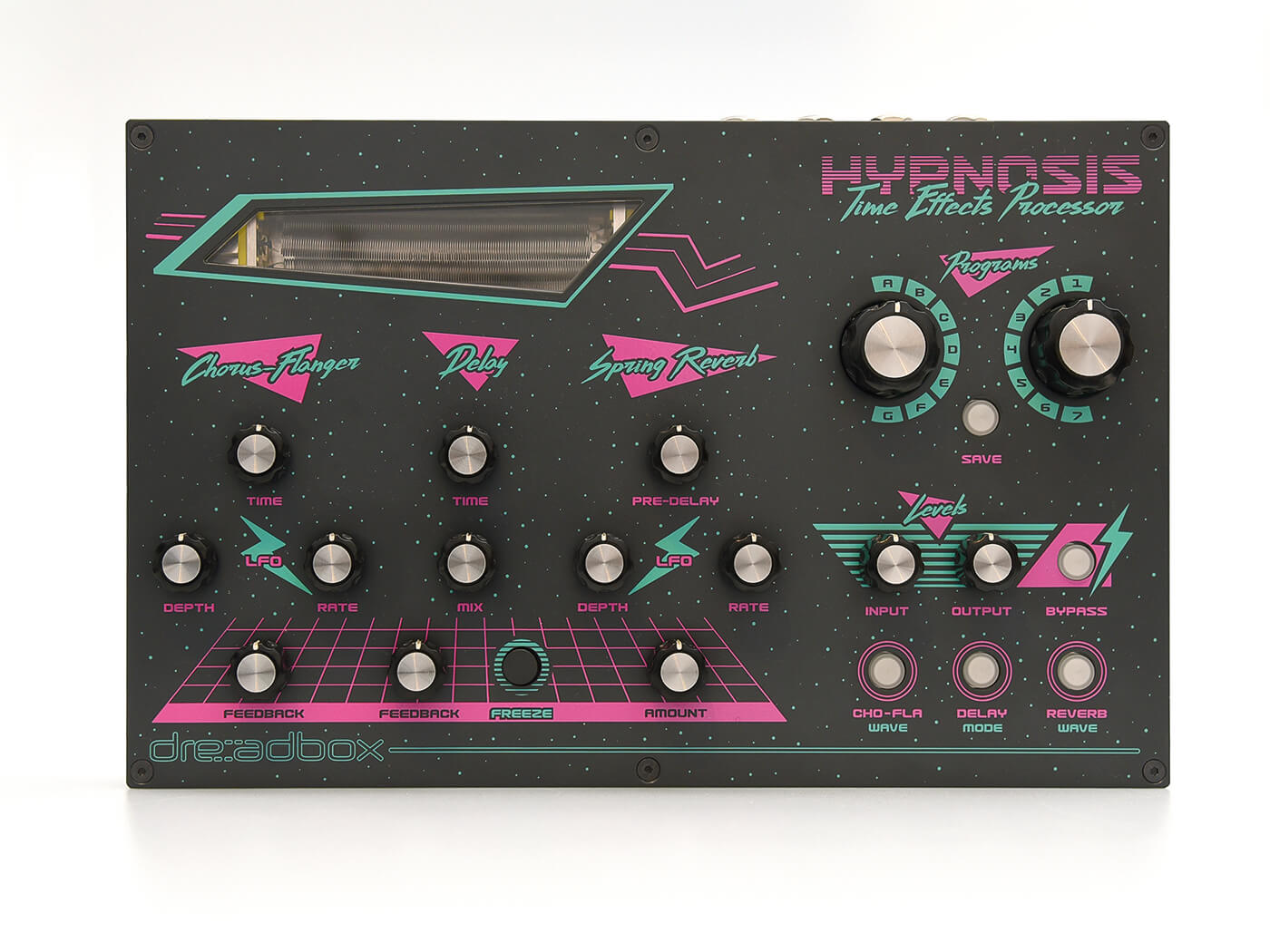 The 1980s revival is underway – and has been for some years now. Whether you turn to hyper-stylised TV shows such as Netflix’s Stranger Things or the pop music and accompanying videos of Dua Lipa and her contemporaries, references both subtle and explicit to the decade are everywhere. The pro-audio industry prides itself on responding to trends and the subject of this review is the embodiment of 1980s-style retrofuturism.

Dreadbox is a Greek hardware developer whose products include the excellent Erebus synthesizer and a range of modular synth components. Hypnosis, however, is a new three-in-one ‘time-effects processor’. It features chorus/flanger, delay, and true spring reverb effects packed into a single desktop module. Its retrowave Memphis-style pink and blue-green aesthetics recall everything from 1980s workout videos to the era’s arcade games. Aerobics and Space Invaders aside, to complete the look, every Hypnosis unit comes accompanied with a black sweatband embroidered with the words “synth addict”, stitched in a stylish turquoise hue.

The inevitable question, then, is whether there’s a worthwhile effects unit coiled beneath the retro-cool hood, or whether Hypnosis is just another pretty face primed to take advantage of a popular fad.

Connections are made on Hypnosis’s rear panel with 1/4-inch stereo inputs and outputs, a power connector and a rocker switch to turn the unit on and off – and that’s your lot. There’s no MIDI provision and, perhaps more surprising for a company whose product line caters so well to all things modular, no CV/gate connectors either.

Its chorus/flanger and delay modules are true stereo, while the spring reverb is mono. Above the three effects knobs on the left of the module, there’s a plexiglass-fronted cutaway section, nestled inside of which is the pink back-lit spring reverb. As you’d hope, this is every inch the real thing. Tap the unit gently and you’ll see and hear its springs vibrate. In another fantastic touch, the pink LED that illuminates the spring reverb also acts as an input-level meter, glowing more fiercely as the input level increases. It’s especially wild when you’re working at night.

Hypnosis boasts 49 presets, organised into seven banks (A-G) of seven programs (1-7), which can be overwritten if you dial in a treatment you want to save. Presets store individual parameter values for each of the effects modules but don’t include input or output dials, nor the bypass-state button that activates and deactivates all three effects with a single push. Our instincts are that the bypass button is illuminated the wrong way around. When it’s lit (when the bypass is on), the effects processors are activated, and when its light is off, the unit is silent. It might make more sense were it labelled ‘on/bypass’ instead.

To awaken the Hypnosis unit, Dreadbox suggests turning the input level all the way down before slowly increasing it until the backlight inside the spring reverb begins to illuminate. Time to wake up. 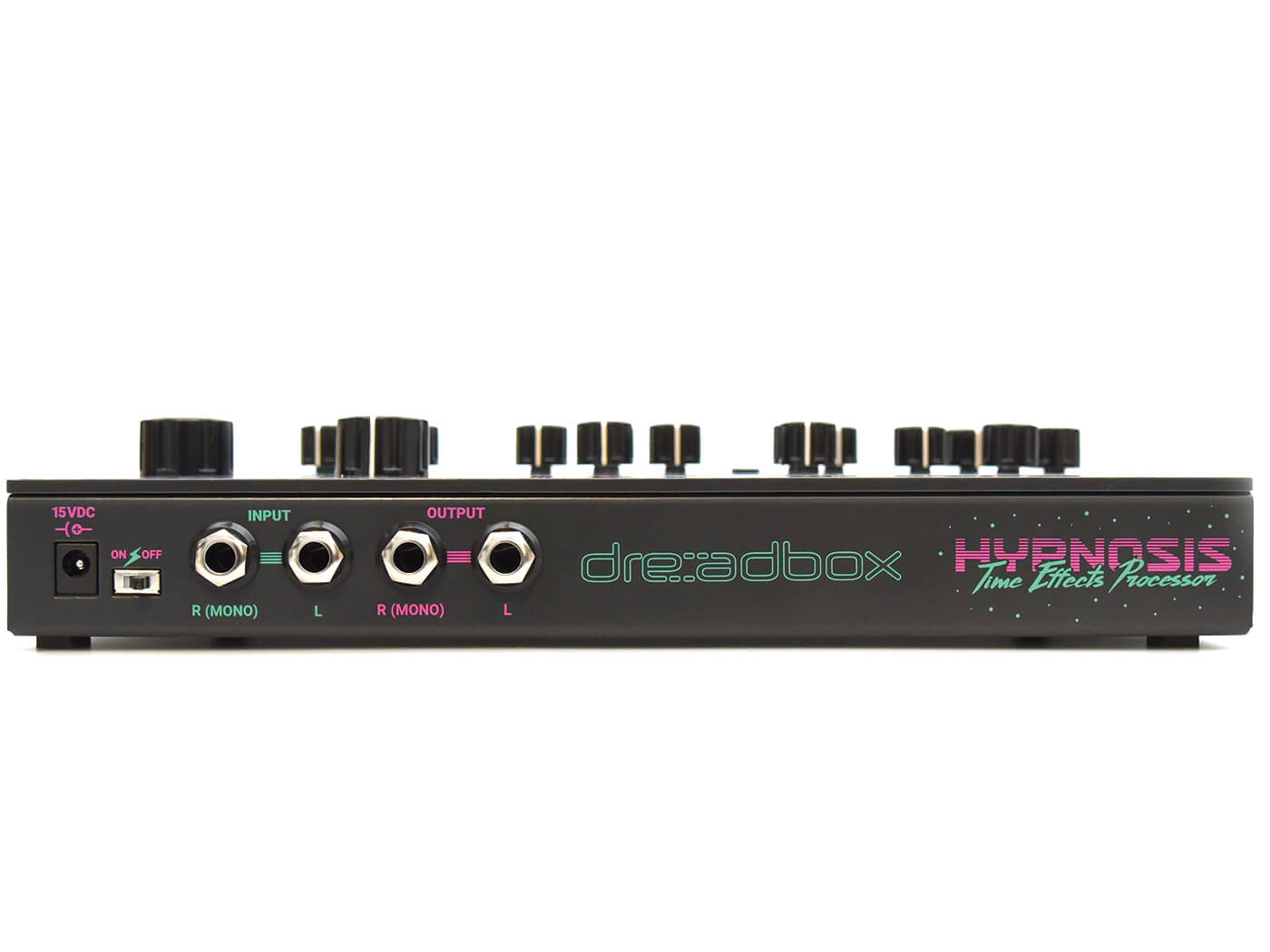 The chorus/flanger module on the unit’s far left features time, LFO depth, LFO rate, and feedback dials. With these, and depending on your settings, you can create a range of doubling effects. All three effects modules offer three variations, relevant to the effect type you’re working on. Holding down the Cho-Fla button in the lower right-hand corner will cause the three effects module lights to flash.

By pressing any of them, you can change the waveform at the heart of the chorus/flanger module’s LFO. The last of these is a sample-and-hold waveform, which steps randomly from one setting to the next and is capable of unexpected and almost sequenced results. Warning: it’s at this point that you’ll likely yearn for some kind of sync control over Hypnosis’s parameters – you won’t find it. Any and all sync’ing must be done by ear.

In addition to the delay module’s time, feedback and mix dials, it too offers three modes: a regular delay, which sounds to us like a resonant delay; a band-pass filtered delay; and a tape-like option. All three have their own character. Freeze-style controls are more readily associated with reverb but Dreadbox has brilliantly added one to Hypnosis’s delay.

Pressing and holding the freeze button sees it effectively loop a section of the delay until you lift your finger from it. Though, if you want it to continue indefinitely, you can engage freeze and then deselect the delay module altogether in the lower right-hand corner. Here, you can continue to operate its other parameters, and create pitch/tempo variations via the delay’s time dial, for instance.

For many, though, Hypnosis’s most rousing feature will be its spring reverb. It sports pre-delay and amount dials, as well as depth and rate dials for LFO modulation. Again, its waveform can be manipulated via three options that allow you to change its shape, meaning the module has masses of sonic potential.

Despite being limited to just three effects types, Hypnosis can produce a wide range of sounds. Its aesthetics suggest it should be used to enhance and embellish the kind of pads, melody lines, bubbling sequences and introspective leads that characterise mid-1980s synths and, without question, this is a wonderful option if those are the sounds you crave. But it’s capable of much more. Its delay module in particular is ready and willing to offer treatments that transcend genre, place and time.

All that said, Hypnosis is expensive for what it provides – its price probably driven up by its stereo components – though its price has dropped since launch. The choice for consumers is whether this three-in-one unit justifies its cost, given that it features no synchronisation options, no MIDI control, no footswitch activation and no way of communicating with modular systems beyond audio in/out.

Shortcomings aside, though, there’s no doubt that this is far from an anonymous effects processor that lacks individuality. This is a characterful, on-trend and sensational-sounding processor whose effects will stand the test of time. If money were no object, we’d wholeheartedly recommend Hypnosis. As it is, however, we suggest that anybody interested in this Dreadbox box scopes out some audio demos before making a decision. Be sure you’re in love with this unit before making a commitment. 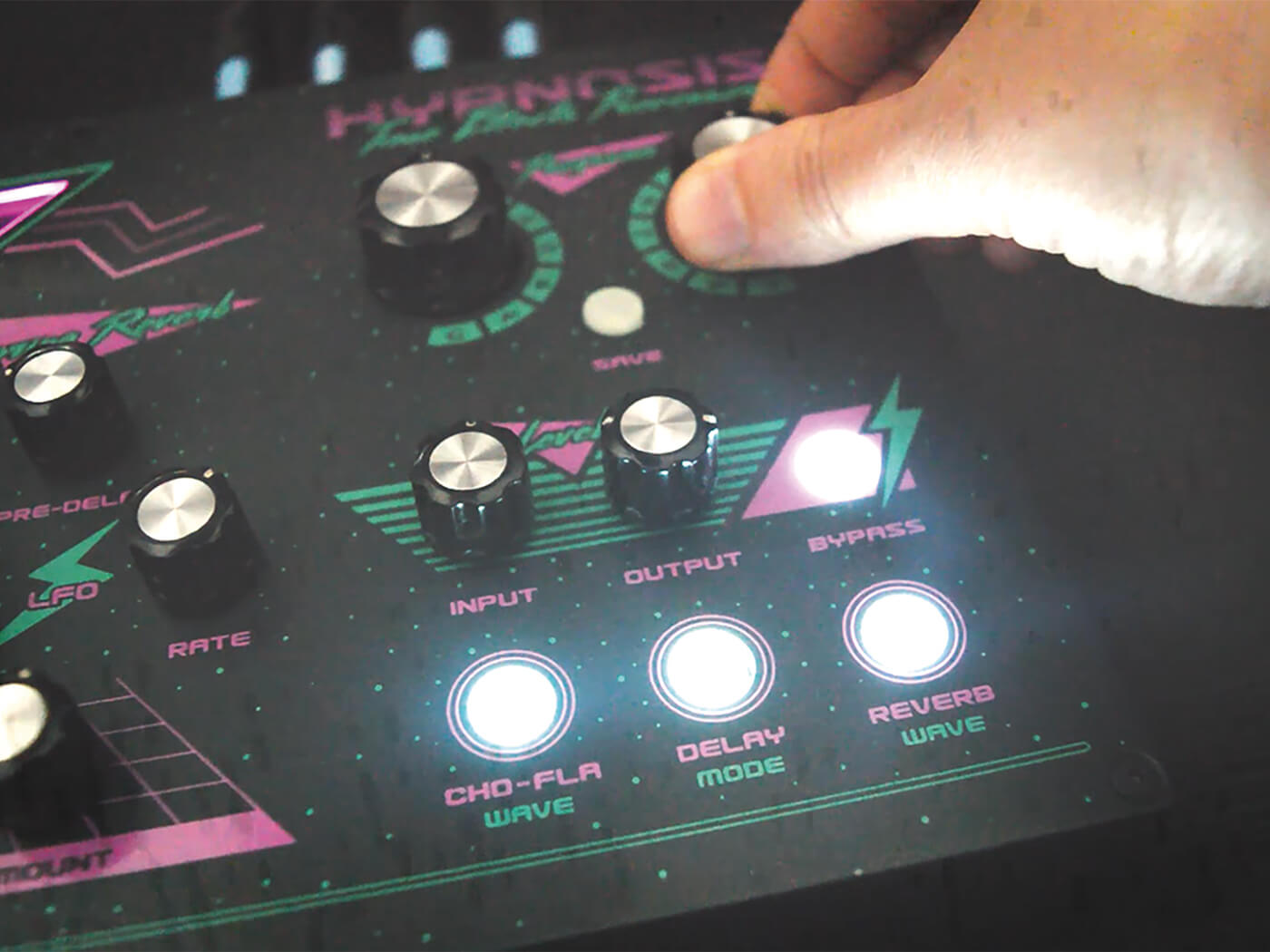 We can’t argue with Hypnosis’s sound, and the 1980s-inspired unit has some fashionable tricks up its batwing sleeves: the delay module’s freeze function is superb, and the spring reverb sounds exactly as you’d hope it would, in the best possible way. It’s a capable three-in-one effects unit but, for all its rich and glamorous character, it doesn’t offer much in the way of connectivity.

Beyond audio I/O, Hypnosis isn’t able to link up with outside units in the ways you’ll wish it could. That means no external control, MIDI or synchronisation options. It’s not cheap either, especially given the shortcomings outlined above. However, for 1980s sounds, it’s a real winner. 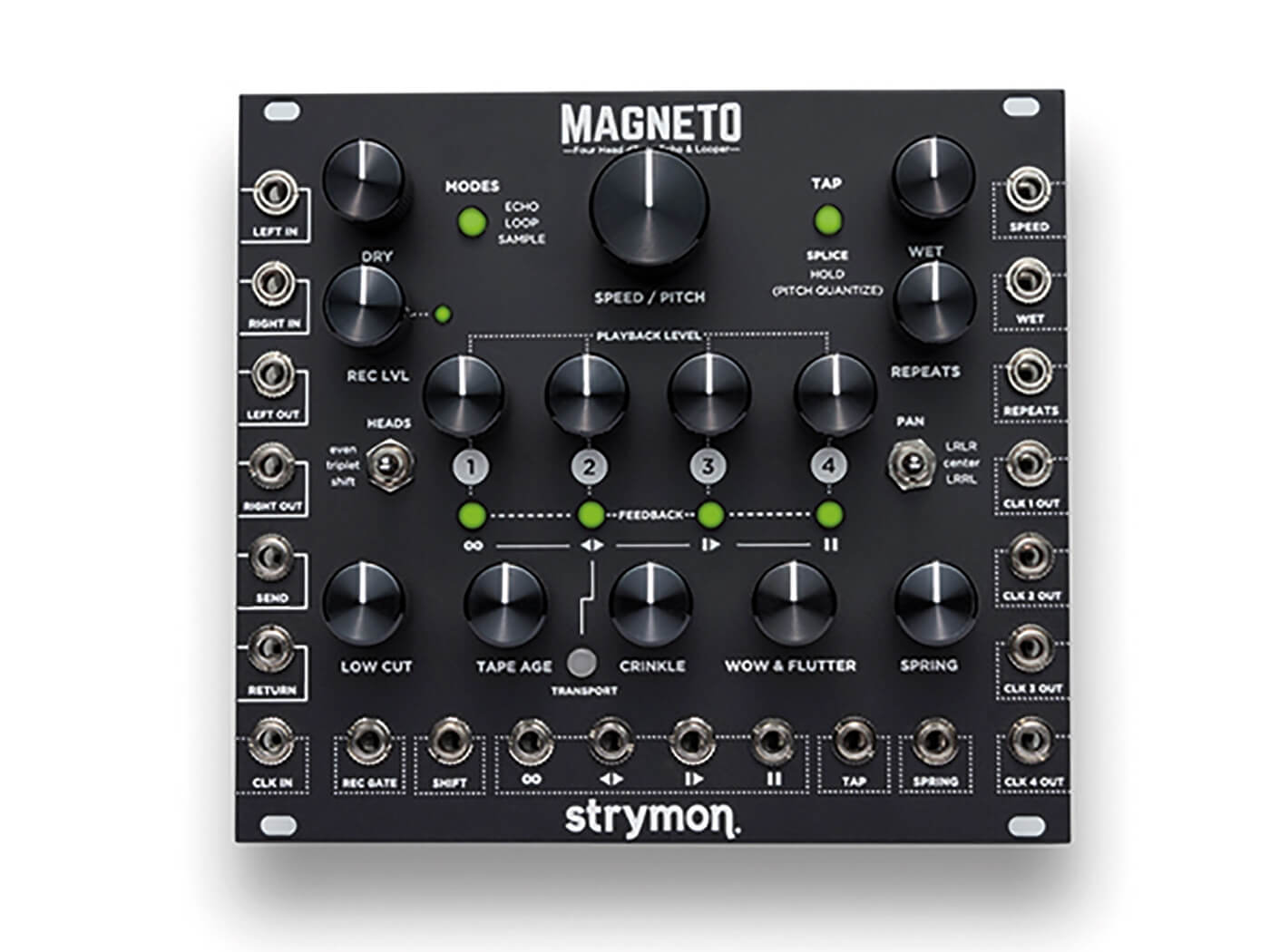 If you like the look of Hypnosis but crave more modular compatibility, reach for Magneto, a multi-effect unit that packs in a stereo multi-head tape delay, looper, phrase sampler, vintage spring reverb and more. 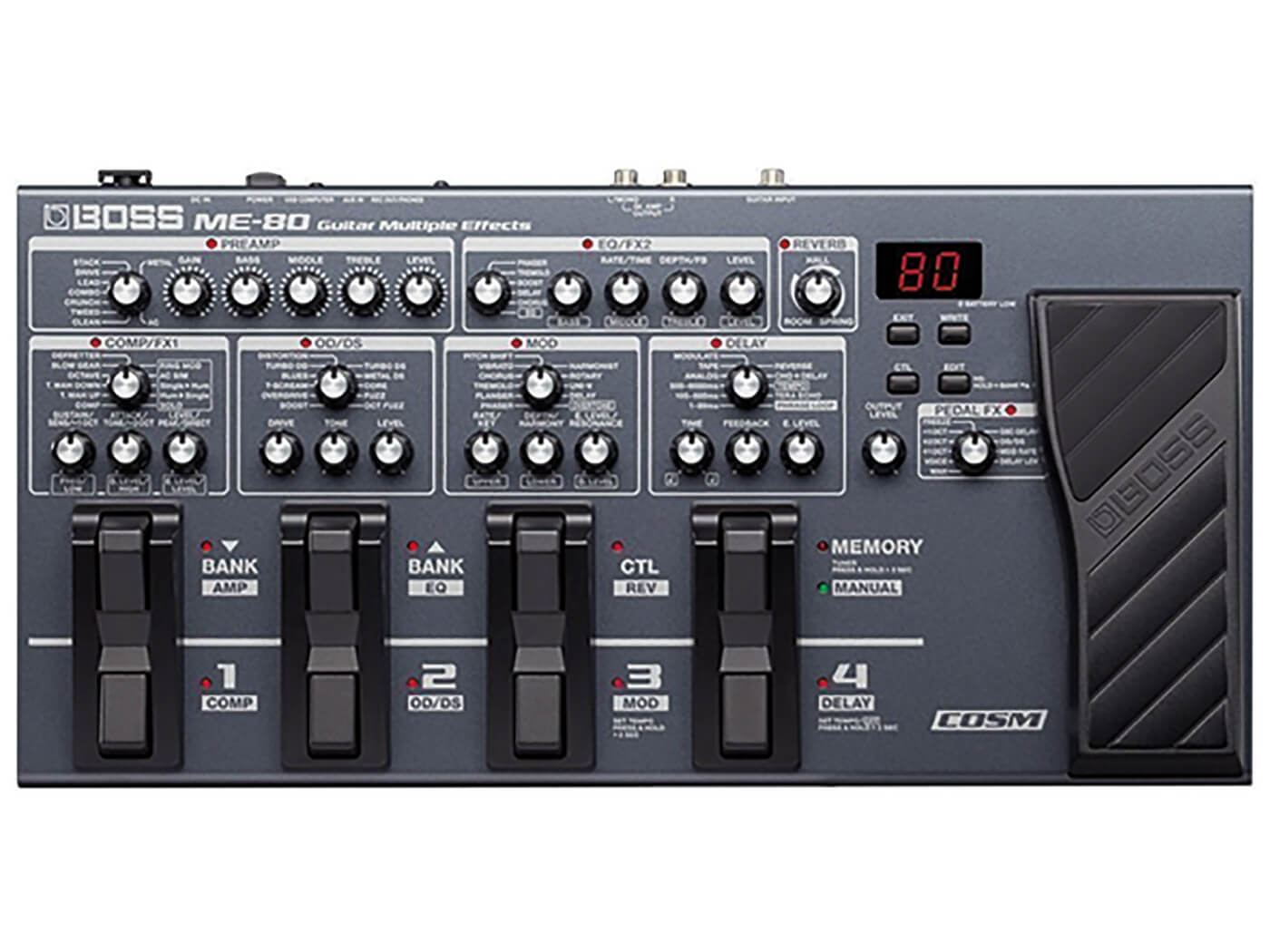 This may seem like an unfair comparison, as the Boss ME-80 is designed to be an all-purpose effects pedal for guitarists and Hypnosis is a boutique synthesizer. But it just goes to show what kind of kit you can get for substantially less cash.