The 500 Preamp from Brit maker Cranborne Audio is more than just a mic preamp that offers ultra-clean gain at a relatively affordable price – containing not one but two types of Mojo. 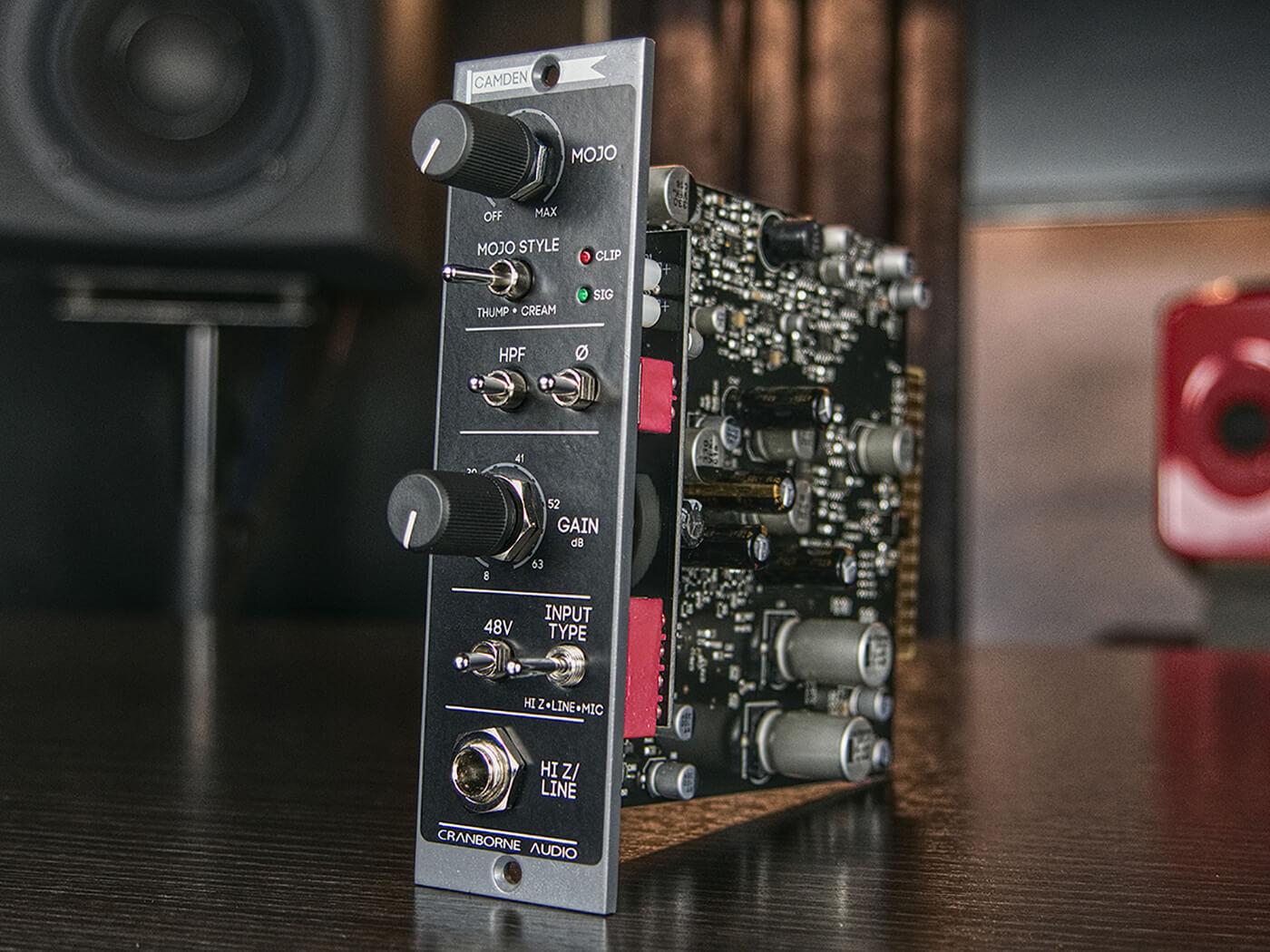 A relatively new name to the pro-audio world, British company Cranborne Audio is committed to producing excellent gear at affordable prices. The Camden 500 on test here is a transformerless microphone preamplifier offering both ultra-clean, transparent mic gain and two flavours of ‘Mojo’. However, the 500 is not just a microphone preamp, but also a line-level preamp and DI. This means it has added creative functionality by potentially adding saturation to synths, drum machines, and mixes.

The Mojo Analogue Saturation function will be a strong selling point, as it aims to emulate the colourful sound of vintage consoles by making use of a variety of filters and discrete harmonic generators.

Before I explore the Camden’s Mojo controls, let’s take a look at the basics. The preamp is suitable for all types of microphone (XLR input on the rear of the unit), with +48V phantom power available for condenser mics. And with 68.5dB of gain on tap, it has more than enough level to amplify insensitive mics, such as many ribbon designs. Line-level input sources are also catered for and a ¼-inch jack input on the front panel is provided to accept a high-impedance instrument source.

Now for the Camden’s unique Mojo control. This is essentially a saturation circuit, making use of a variety of analogue filters to add second and third harmonics to audio signals. This Mojo comes in two distinct flavours, named Thump and Cream, which can be dialled in to produce results ranging from a subtle thickening of sounds to full-on harmonic overdrive.

Thump produces harmonic content below 100Hz, which, as you can imagine, works particularly well with bass instruments. It’s worth experimenting with mid-dominant audio, too, though, as the Mojo function can be used in conjunction with the HPF to create some interesting and useful tones.

The low-end boost on offer is quite different to the effect of boosting low-end EQ, so while the bottom end becomes fatter, rounder and more expansive, it avoids the muddiness that can clog up mixes. For example, kick drums take on an extra degree of weight without sacrificing punch and definition. And as the effect isn’t EQ-based, it’s controlled by the strike of the drum, rather than colouring the audio picked up between hits as an equaliser would. 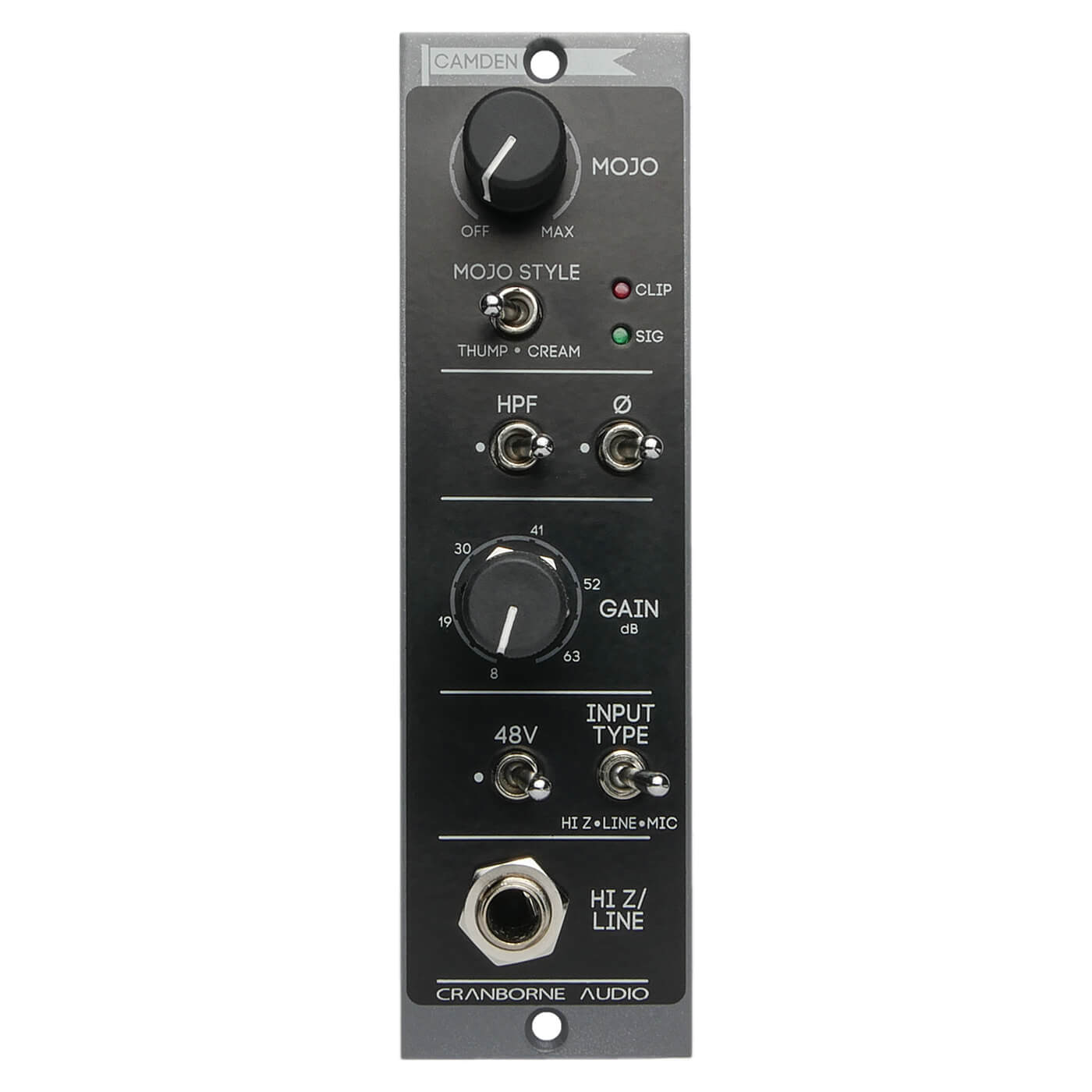 The Cream setting produces its effect by combining two saturation stages and adding harmonics to the incoming audio signal. In practice, this mimics the sound of many vintage (or vintage style) transformer-based mic preamps when used sparingly, while at higher levels, it achieves the effect of recording ‘hot’ to analogue tape. Cream also alters the signal’s dynamic shape, smoothing transients while increasing presence. Again, the amount of Cream applied is signal-dependent – so a wildly dynamic vocal for example will provoke greater total harmonic distortion (THD) on the loudest parts, just like burning to tape.

It’s worth pointing out at this stage that the Mojo control isn’t limited to its function when processing an untreated incoming signal; it can also be used to treat previously recorded audio that may have been compressed and/or equalised. So if that wildly dynamic vocal provokes too much grit on certain notes, the Cream can be added later, after a compressor or limiter has tamed the dynamics. While the Camden’s Mojo control successfully replicates the warm, full-bodied tone of many transformer-coupled preamps, Cranborne Audio opts for a transformerless design for the main, no-added-Mojo preamplifier.

Transformerless designs excel at delivering clean, linear amplification that is true to the original source signal. This is ideal for capturing the pure, unadulterated tone of acoustic instruments; however, for many sources – guitars, synths, drums and vocals, for example – the colourful, larger-than-life sound of transformers can be flattering. Transformers impart their own unique flavour and tend to roll off frequency extremes, which is what creates that mid-forward vintage vibe so beloved of Neve 1073 aficionados.

That particular sonic signature can’t be altered in its intensity (or switched off) however, which accounts for the Camden’s transparent transformerless design coupled with variable vibe control; you get the best of both worlds.

My first test is to connect an AKG C414 to the Camden and record some acoustic guitar with all Mojo filters bypassed. I’ve recorded this guitar (a Seagull) using my favoured C414 through many preamps, including the current Neve 1073 SPX and our reference Thermionic Culture Earlybird valve preamp. Bearing in mind both those units cost several times the price of the Camden, I’m pleasantly surprised to hear a clear, open sound with a clean, extended top end crisply rendered transients.

Midrange body is good: however, detail was improved by engaging the HPF, which reduces some low-end boom. At this setting, the Camden sounds quite devoid of obvious character, which shouldn’t be taken as a criticism. Rather, it reveals its uncoloured nature. In terms of character, I am more aware of the woody midrange tone of the AKG mic, which makes it so good for recording acoustic guitar.

The way the Camden allows microphones to express their own character is remarkable, particularly considering the low cost of the unit. This is confirmed later when I plug in a Neumann U 67 and immediately hear its velvety smooth yet dark midrange tone, with no audible added hype or artefacts from the Camden.

Returning to the Seagull/AKG C414 setup, I flick the Mojo switch to Cream and turn the dial. At modest settings, the Mojo moniker proves to be apt, as the sound became fuller and rounder with a glossy top end. As the Cream is increased, though, the sound becomes more aggressive and dynamically sat upon.

While a heavy helping of Cream doesn’t flatter the acoustic guitar as much as the lighter coating, I later achieve excellent results recording a Fender Stratocaster through a Bassman amp and cab. Dialling up the control to the 2 o’clock mark produces a wonderfully throaty sound with punch, crunch and presence.

Come back to Camden

For all the terrific results I achieved from the Camden, though, the process that filled my heart with joy most of all was using it with a Neumann U 47 FET on a kick drum. The drum itself is a large (24-inch) Ludwig, not overly damped and sounding big and banging. Dialling in a healthy dose of Thump adds character unavailable from any equaliser I’ve ever used. The low end becomes not only weightier, but also more expansive – think John Bonham playing Led Zeppelin’s classic Kashmir.

For comparison, I used the Camden in super-clean mode along with a Pultec EQP-1A equaliser, a combination I regularly use. However, in this instance, the Mojo provided by the Camden renders the EQ redundant. Cranborne Audio’s Camden is a fabulous microphone preamplifier. I would be raving about it at twice the price, but as it is, it’s practically a gift. I would have no hesitation using the clean signal path to make highly critical, natural-sounding recordings and, as you may have gathered, the Mojo controls offer a whole world of sonic enhancement.

The Cranborne crew has hit the ground running with its first product to market. I eagerly anticipate getting my hands on the rest of its recently released product line. Bring it on guys – I’m all ears.

If I didn’t have a word count to adhere to, I’d answer the above question with one word – Yes! Unless you make electronic music entirely in the box, everyone needs at least one great microphone preamplifier. And if it performs other functions apart from supplying gain for your microphones, so much the better. There are plenty of preamps out there with a great vibe, often the result of employing transformers with a vintage character – CineMag and Carnhill spring to mind. Trouble is, the character is ever-present and can’t be altered, which is why many studios and producers often have a preamp arsenal as large as their microphone collections. 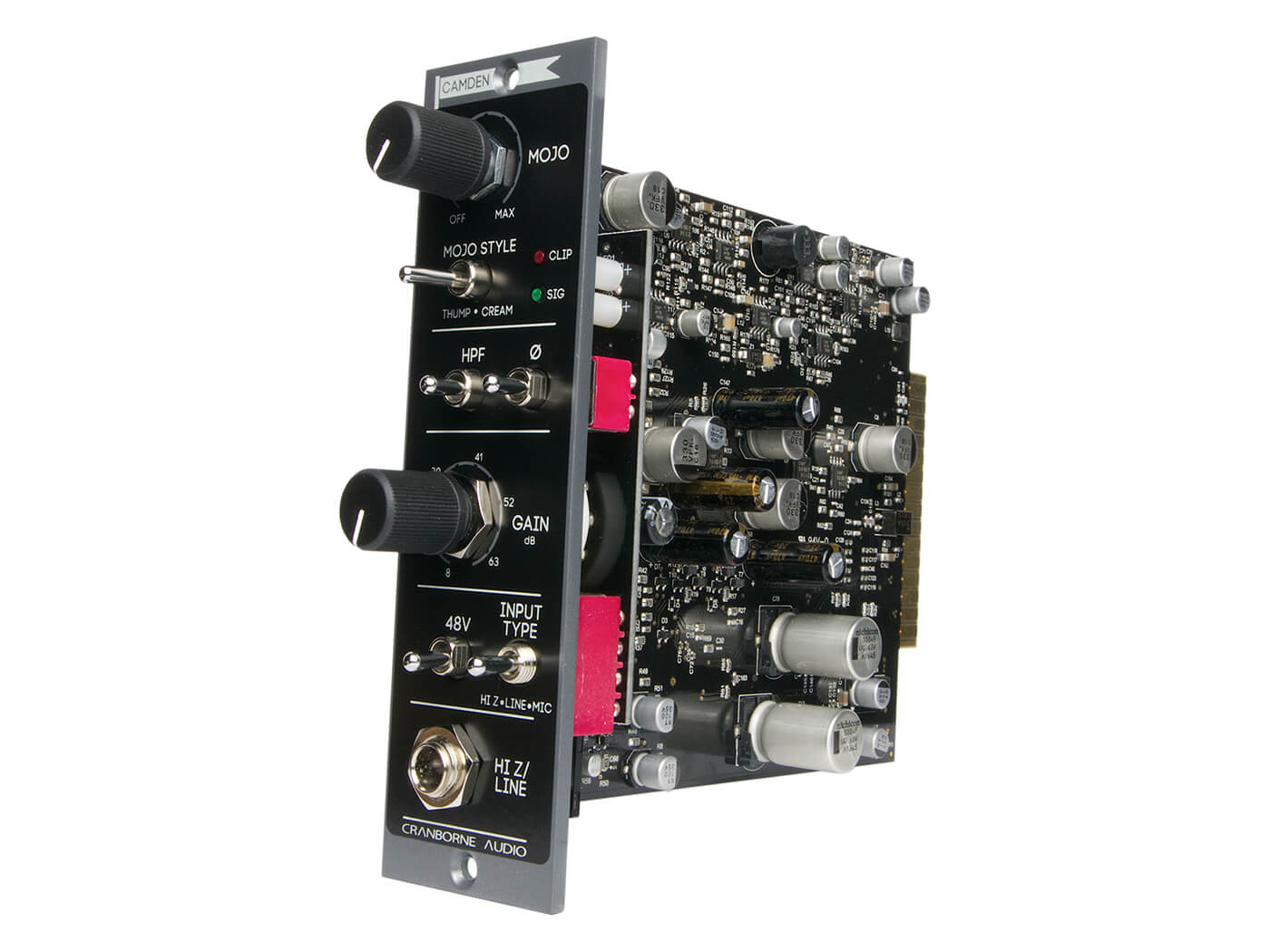 For a superb clean, open and unhyped sound that captures the natural sound of voices and instruments, look no further. Add to that the wide palette of sound textures on offer via the Mojo controls and you have a versatile recording tool that performs way better than its modest retail price would suggest. 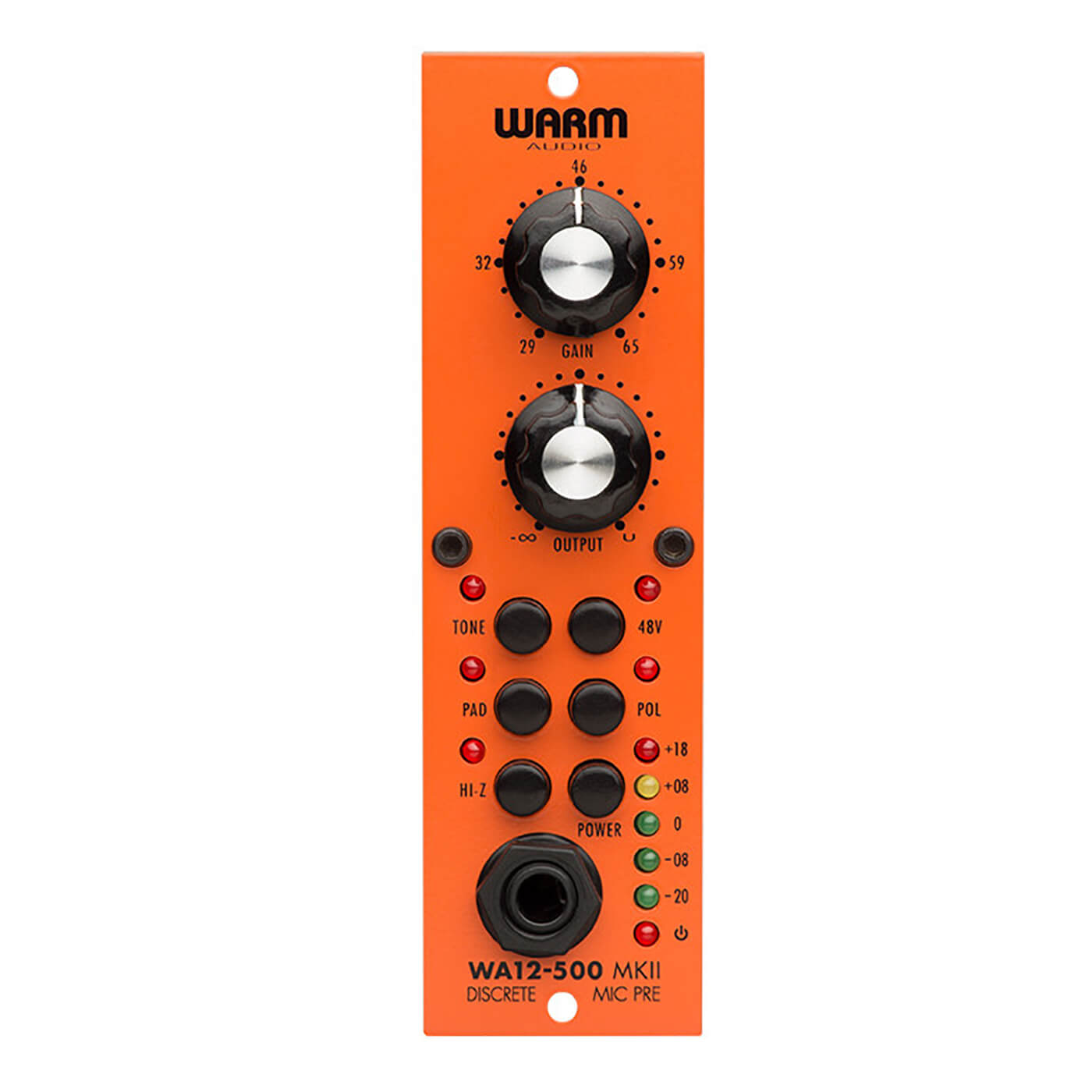 The WA12 uses CineMag transformers and switchable impedance to produce a vintage tone based upon classic American API consoles. It features an output control to allow cranking the input gain to achieve a saturated tone. 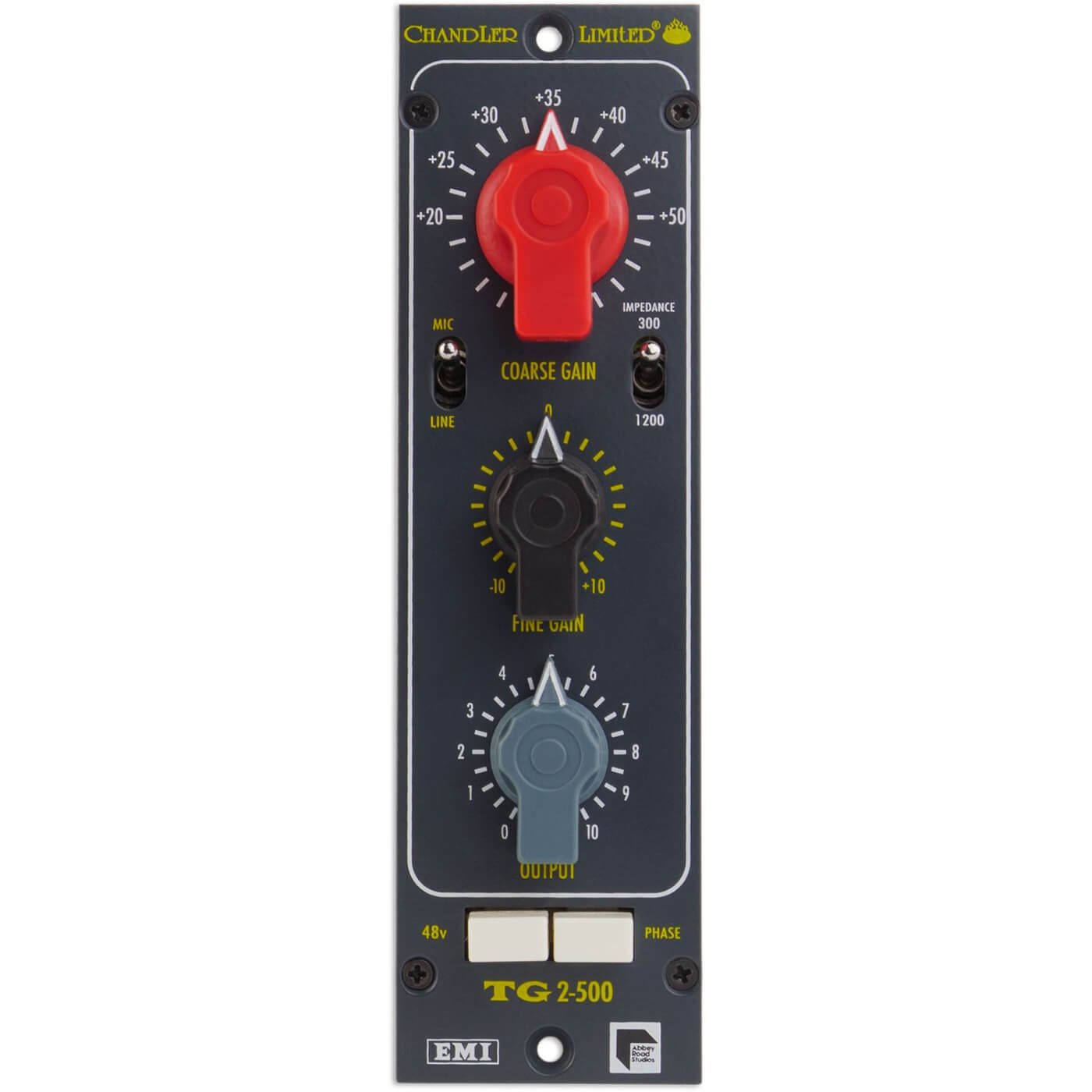 Based upon the first solid-state TG consoles designed by EMI in the late 1960s, the TG2-500 is a discrete, transformer-balanced design offering 60dB of mic amplification via course and fine gain controls. It also features an output control and switchable impedance to create a variety of tones.