Integrating the classic analogue warmth of vintage studio desks into its products is nothing new for Chandler Limited, but with its new microphone, the company brings the internal components of a legendary Abbey Road mastering console to the masses… 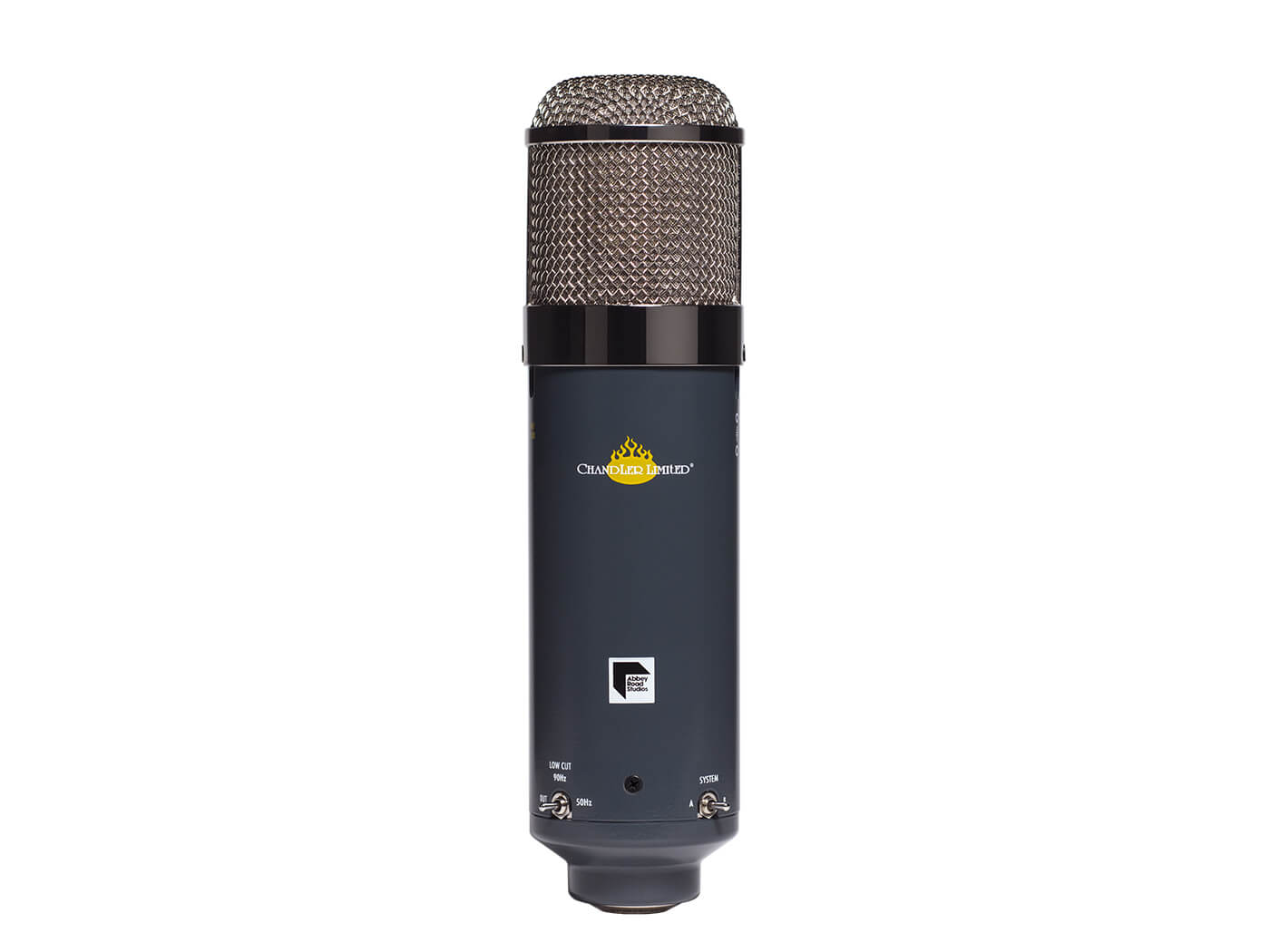 Chandler Limited’s new TG Microphone is the latest in a long line of products based upon historic equipment from EMI’s Abbey Road Studios. This large-diaphragm condenser mic isn’t a replica of a well-known classic, though; rather, it incorporates features from the EMI TG12410 Transfer Consoles (mastering consoles), specifically its tape-equalisation systems.

Visually, the TG mic resembles the Neumann U 47/48, as did Chandler’s previous microphone, the valve-powered REDD; this new TG Microphone is solid state, just like the TG range of consoles. Unlike the REDD Microphone, the TG has no built-in preamplifier, though it does have its own power supply, negating the need for +48V phantom power.

In place of the REDD mic’s internal preamp is the aforementioned tape-equalisation systems, specifically emulating the American NAB and European IEC formats at both 7.5ips and 15ips (inches per second). These settings are available via a five-position rotary switch; with the Flat setting located centrally and flanked by each of the tape-EQ simulations at their respective speeds.

As if five tonal flavours weren’t enough, the mic performs in two distinct systems (A and B), selectable with a toggle switch. System A is voiced to express a more obvious TG character – mid forward, slightly compressed and with enriched harmonic content. System B is more open (or “pristine”, in Chandler’s own words) and able to handle higher SPLs. This is the setting to use when using the TG anywhere you might otherwise employ a FET 47 – electric guitar and kick drum for example. The mic’s 10dB pad can be usefully engaged in these scenarios.

The TG also features a Low Cut filter, selectable at 90Hz or 50Hz and can be used with either cardioid or omni-directional polar patterns. With all these parameters on offer, the variety of tones available from this mic is vast. Before we expand on these tonal options, let’s take a look at the microphone’s construction.

The TG’s body is aluminium, measuring nine inches in length with a diameter of 2.2” inches. This makes it almost two inches shorter than the REDD mic, though the diameter is the same; the chrome-plated brass head-basket is identical to the REDD’s. Faithful to the TG range, the body is the correct shade of dark grey with yellow lettering, though in use, the head basket illuminates with a red glow; this visual feature will be a matter of taste. There is a knack to getting the mic through the shockmount – you have to push the mic up through the bottom of it, capsule-end first, as the protruding tape EQ switch prevents conventional location.

Chandler Limited’s chief designer Wade Goeke developed a brand-new capsule for the TG mic, though an enquiry to a company representative about its specifications were initially met with a “…trade secrets and what we’d learned from our experience with the REDD, we keep it all proprietary” response. A gentle nudge however, revealed that it is a dual-diaphragm, gold-sputtered, edge-terminated design.

As the TG mic offers so many tonal settings, I start the critical listening tests by recording a brief passage of acoustic guitar (a few bars of strumming an E major chord, looped for easy comparison) with each of the Tape EQ settings in both systems A and B. For this test, I select the cardioid polar pattern and don’t engage the low-cut filters. I also record a pass with our Neumann FET 47.

Before I opine about the various tonal characteristics produced, this is how Chandler Limited explains the emphasis of the EQ curves:

As mentioned, these EQ curves interact with the Low Cut filter and will sound drastically different depending on whether System A or System B is selected. Unsurprisingly, System A set flat proves to be the closest in nature to the FET 47, with a rich midrange and ample body further down the frequency spectrum. I follow this by switching in the NAB 15ips tape EQ. The treble boost seems to affect the upper midrange more than the highest frequencies, lending the mic a cupped-hands quality with a less generous low-end response. I’d use this setting for a bluesy harmonica sound, for example.

Switching to NAB 7.5ips and the TG mic sounded thicker and warmer with a robust bottom end; this is a great setting for a dry, close mic’d intimate vocal performance. Staying with 7.5ips but with the IEC EQ curve, the sound is overly warm, with a pronounced low-mid woof; the mic also produces a rather boxy sound at this setting. The IEC 15ips setting, by contrast, removes both the low-mid thump and boxiness evident at 7.5ips, sounding creamy and glossy. 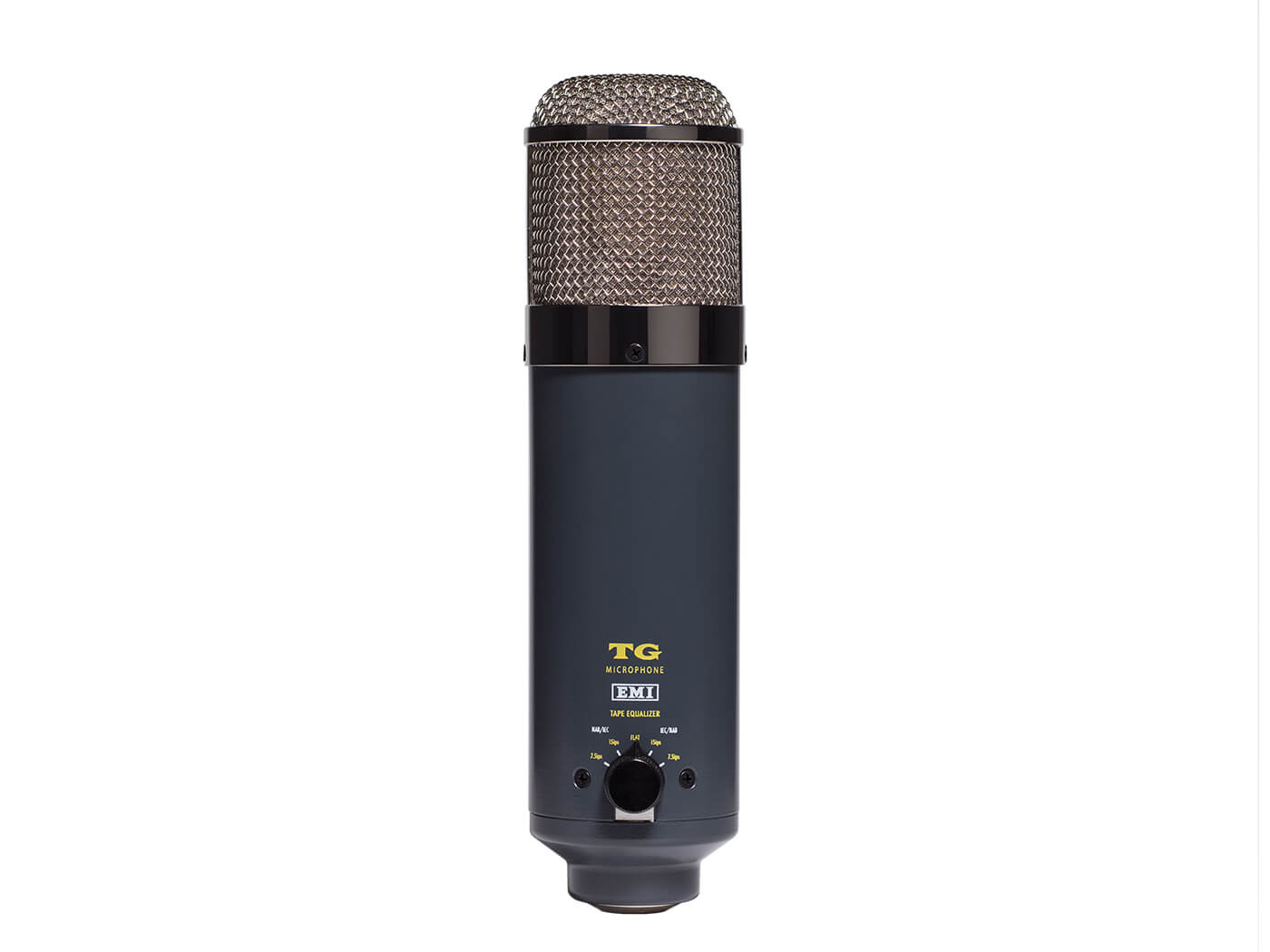 Your own Abbey Road

While all the System A settings are variations on a basically mid-forward character, System B proves to be less obviously voiced and more modern sounding. Set flat, the TG sounds smooth with a sparkling, sweet treble and warm lower frequencies. The tonal balance is less rounded than the flat System A tone and more hi-fi.

At NAB 15ips, the effect is much like the same setting in System A. However, the shelf-like lift from the midrange sounds smoother and svelte. Acoustic guitar had excellent definition here, sounding crisp and clear. The sound becomes noticeably fatter with NAB 7.5ips, which introduces a rich, almost sugary quality to the tone.

Switching to the IEC curve at 15ips brought out the inherent hi-fi sound of System B, rather like using the Loudness button sometimes found on domestic stereo systems, while IEC 7.5ips has a noticeably soft and muted midrange response, which would work well to tame hard or aggressive tones. The real eye opener, comparing the various settings, is how the character of the TG Microphone could be fundamentally altered, yet the underlying high quality of the sound on offer remains constant.

The flat settings of each operating system are excellent starting points, offering distinctly different tonal flavours without any hype throughout the frequency range. I find System A (flat) great for rock and pop vocals, having a rich midrange and nicely rounded tone, while the flat System B brings out more detail and nuance. If, for example, I were recording John Lennon singing Come Together, I would go with System A. On the other hand, if it were Kate Bush singing Wuthering Heights, I would opt for the cleaner System B. Both tracks incidentally, were recorded through a TG console at Abbey Road Studios.

The TG Microphone is another superb product from Chandler Limited. Within one shell, it contains some of the best microphones I’ve ever heard.

Not everyone can own a vast arsenal of microphones, however, every serious sound engineer needs at least one decent large-diaphragm condenser microphone, especially for recording vocals. While there are plenty of versatile mics out there, few, if any, can match the variety of tones on available through the TG Microphone. Even if the TG mic offered only one of its two tone systems, it would earn a place in the upper echelon of large-diaphragm condenser mics.

As it is, the wide variety of tonal characteristics that can be dialled in makes the TG mic a great choice to record just about anything. It can be configured to capture the most delicate audio signals precisely, or be placed up close to the loudest, filthiest-sounding electric-guitar amp without overloading. It could be the only expensive microphone you ever need to buy. 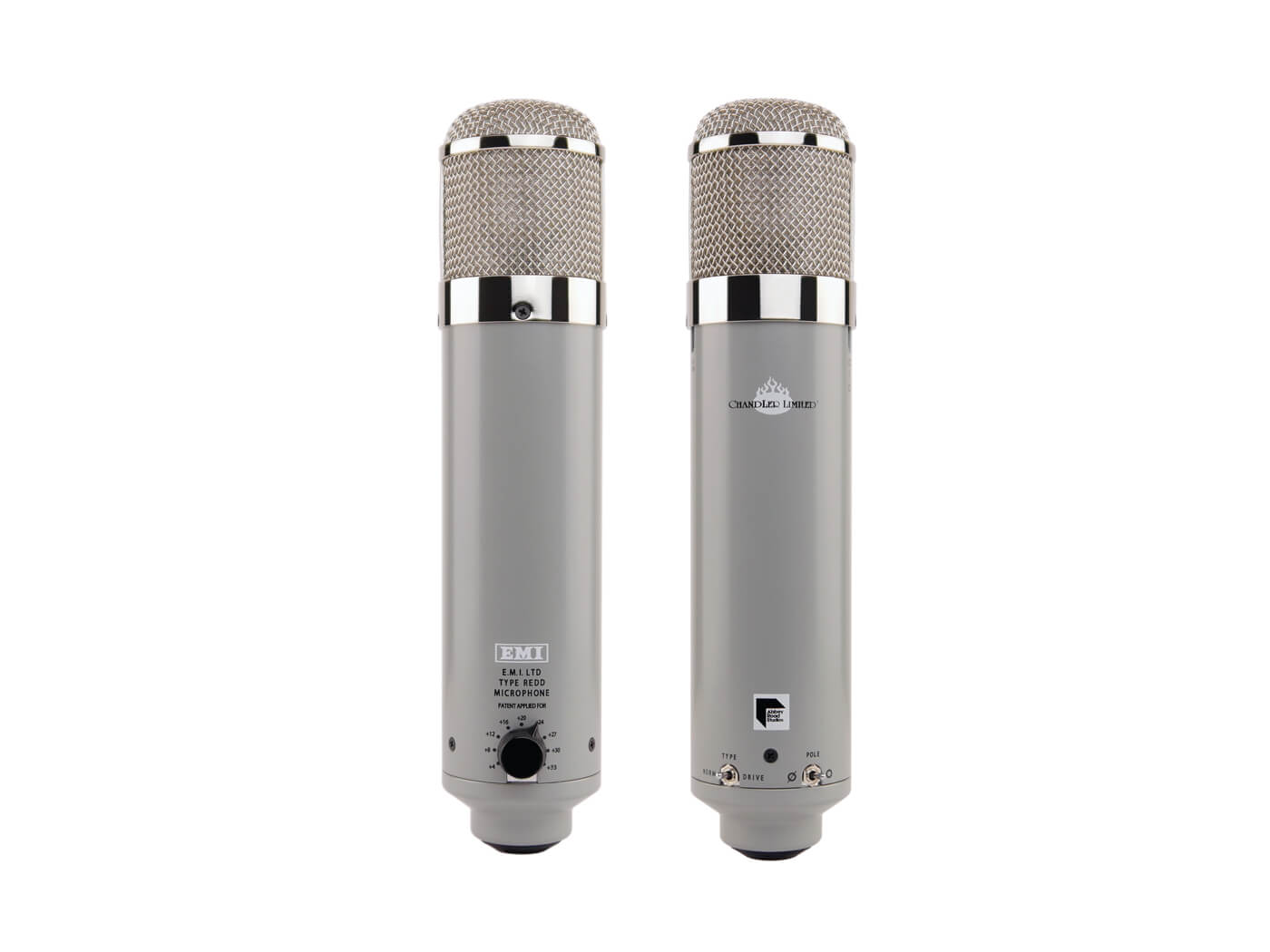 Chandler Limited’s REDD microphone captures the sound of EMI’s valve REDD consoles, which were used at Abbey Road Studios prior to the TG consoles. It features an onboard REDD.47 preamplifier, so it can be plugged directly into an audio interface without the need for an external characterful preamp. It sounds superb. 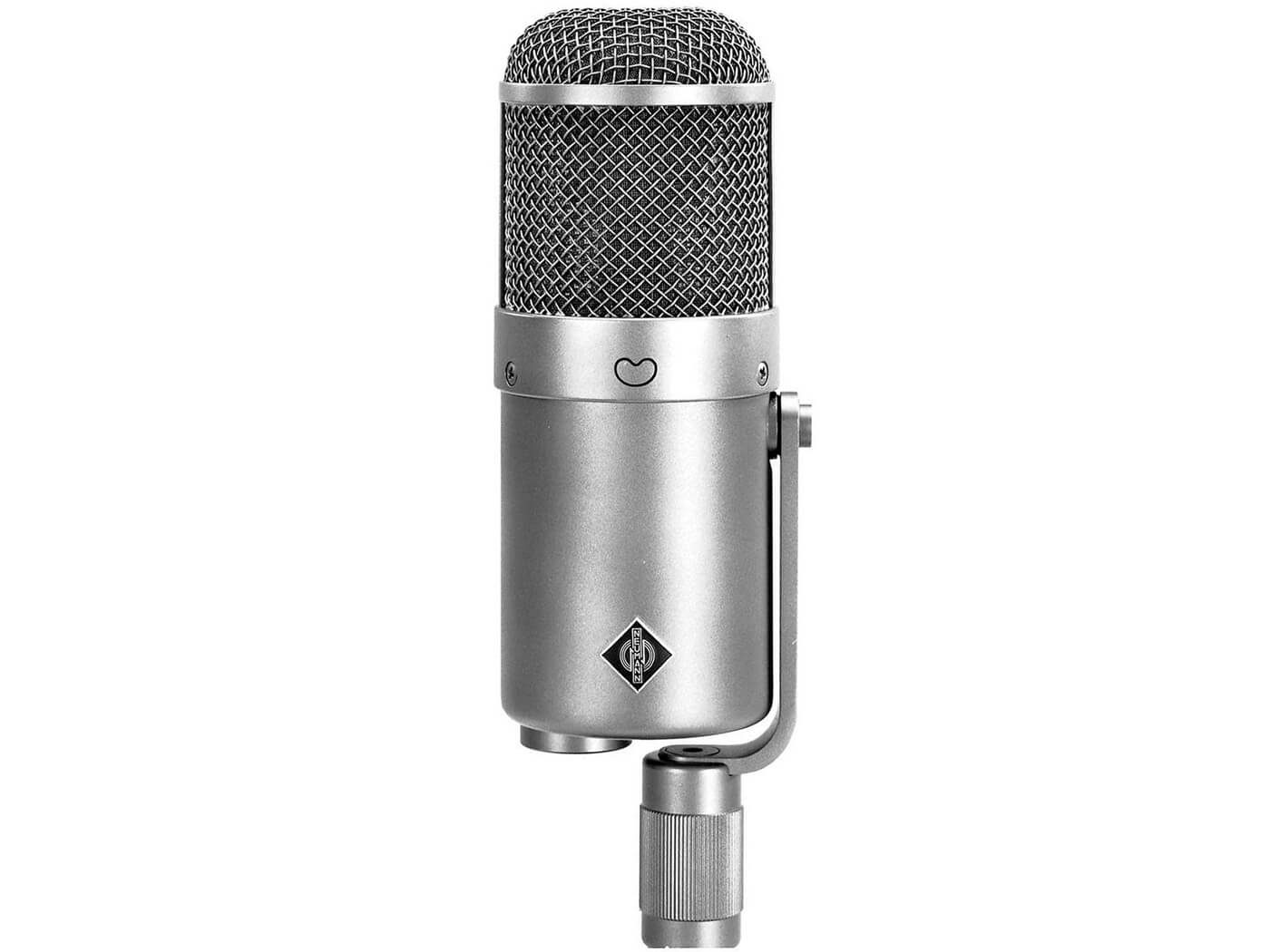 The classic Neumann U47 FET was reissued in 2015. The original 1969 model superseded the valve U 47 and is the primary influence on the basic character of the TG Microphone. It’s an excellent vocal mic and is many an engineer’s go-to mic for recording electric-bass guitar and kick drums.