Fast becoming one of the heavyweights of the outboard world, Black Lion continues to impress with a roaring new offering that’s all grown up… 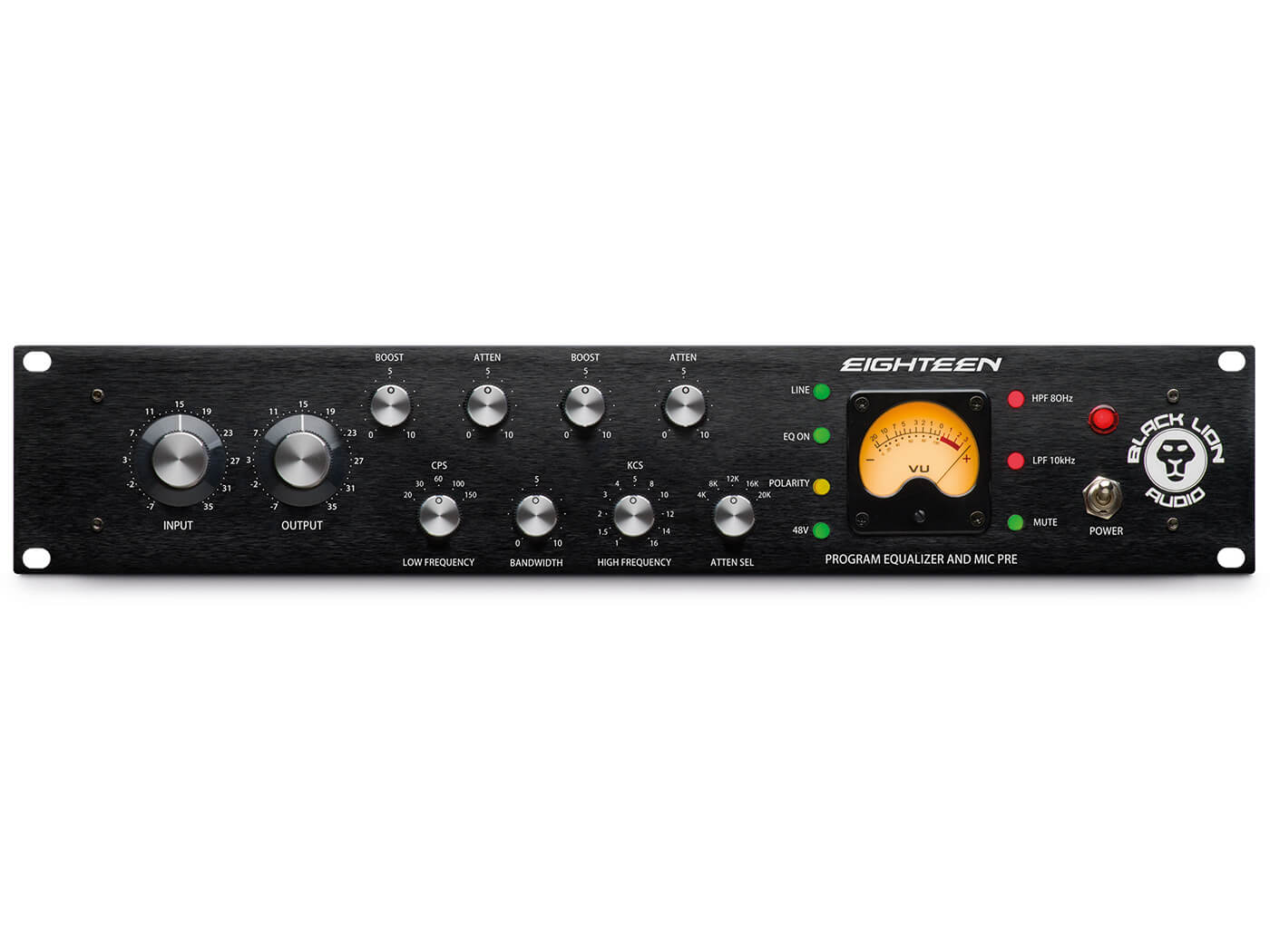 Chicago’s Black Lion Audio has built a pretty enviable reputation by modding gear to release its full potential. These days though, the company also produces high-performance kit from scratch. Like the brand’s excellent Seventeen, a supercharged take on the legendary Urei 1176 compressor/limiter – the new Eighteen takes inspiration from classic audio design without being a clone.

The Eighteen is a single-channel, vintage-styled mic/line preamp with an equaliser. Unlike Black Lion’s earlier preamps, based on those in 1970s Neve and API consoles, the Eighteen makes use of the company’s own Black Lion 1831 op-amps to lend it a vintage flavour. The 1831 is Black Lion’s souped-up version of the historic Melcor 1731 from the 1960s, which could be seen as a predecessor to the 2025 found in API consoles. The vintage vibe also comes from the CineMag transformers.

A custom CineMag inductor is used for the passive program EQ, based on the legendary Pultec EQP-1A, and offers interesting EQ curves that standard equalisers simply can’t. 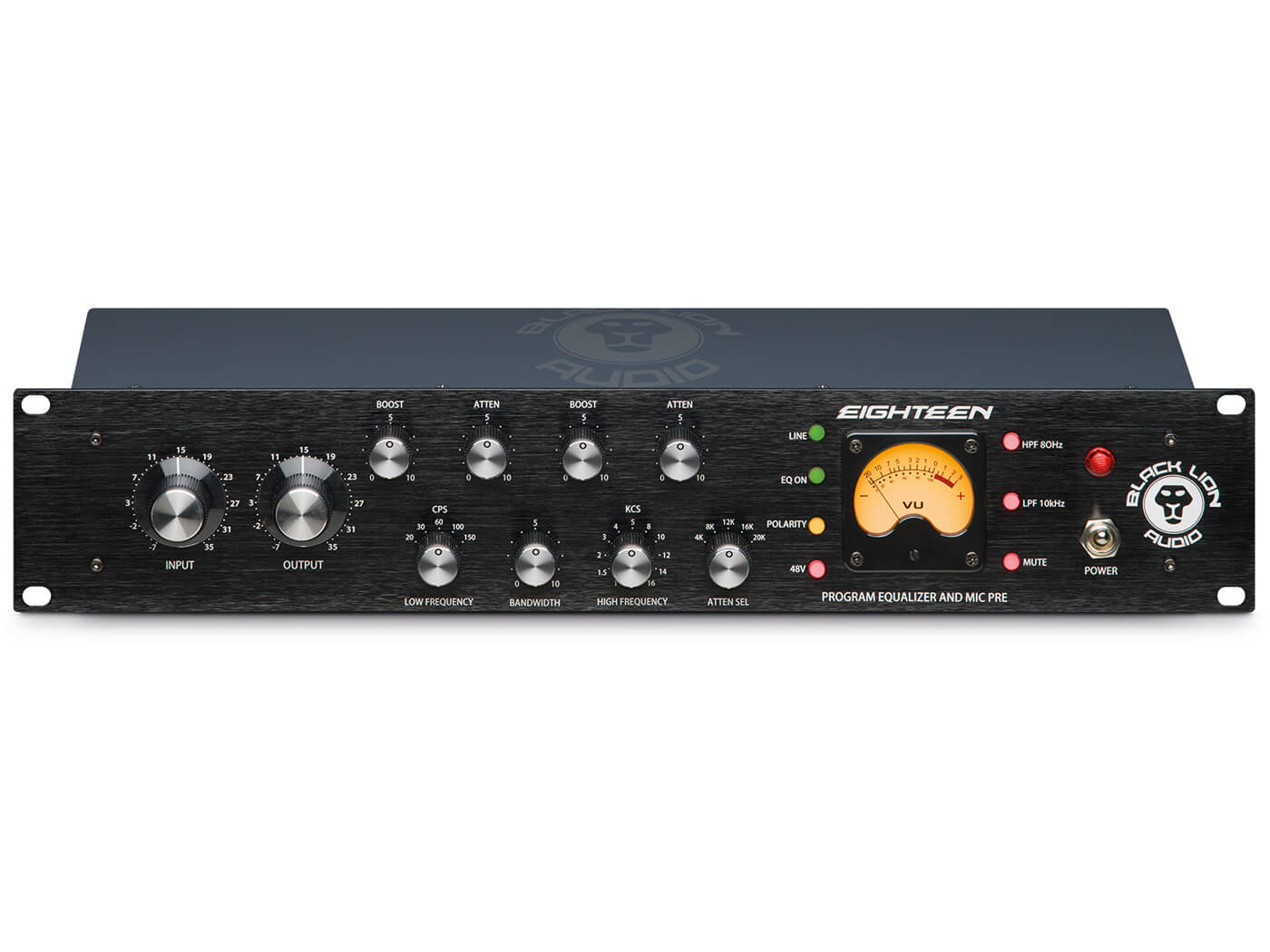 The front panel layout is in the same style as the Seventeen compressor, and features a retro VU meter and chunky rotary switches for input gain and output, which feel solid. There are buttons for 48-volt phantom power, polarity (phase reverse) and a high-pass-filter set at 80Hz. But unusually, there’s a low-pass filter with a push-button too,
for filtering out extreme top end at about 10kHz.

The other front panel buttons allow you to select line input, engage EQ and hit mute, which stops the unit from passing a signal. Disengaging the equaliser bypasses the EQ section, so ideally it should be switched off for the purest clean gain from the mic preamp.

The available gain of up to 65dB is clean in terms of noise,and provides more than enough juice for even the most insensitive mics, such as our Coles 4038 ribbons. Clean and quiet as it is, the sound of the Eighteen is anything but cool and clinical. It’s vintage in character, with a warm and weighty low end that fleshes out the low-mids without becoming overly thick or stodgy.

Lower frequencies are passed with a rock-solid foundation, bringing out the best in bass guitar and low-frequency synth tones. The broad midrange is punchy and emphasises presence rather than presenting a transparent and dispassionate delivery of the source signal; this pre-amp has character and wants you to hear it.

Transition from the midrange to upper treble and the extreme top end is smooth. There’s no hole in the middle between the hefty bottom half of the frequency range and the treble proper. 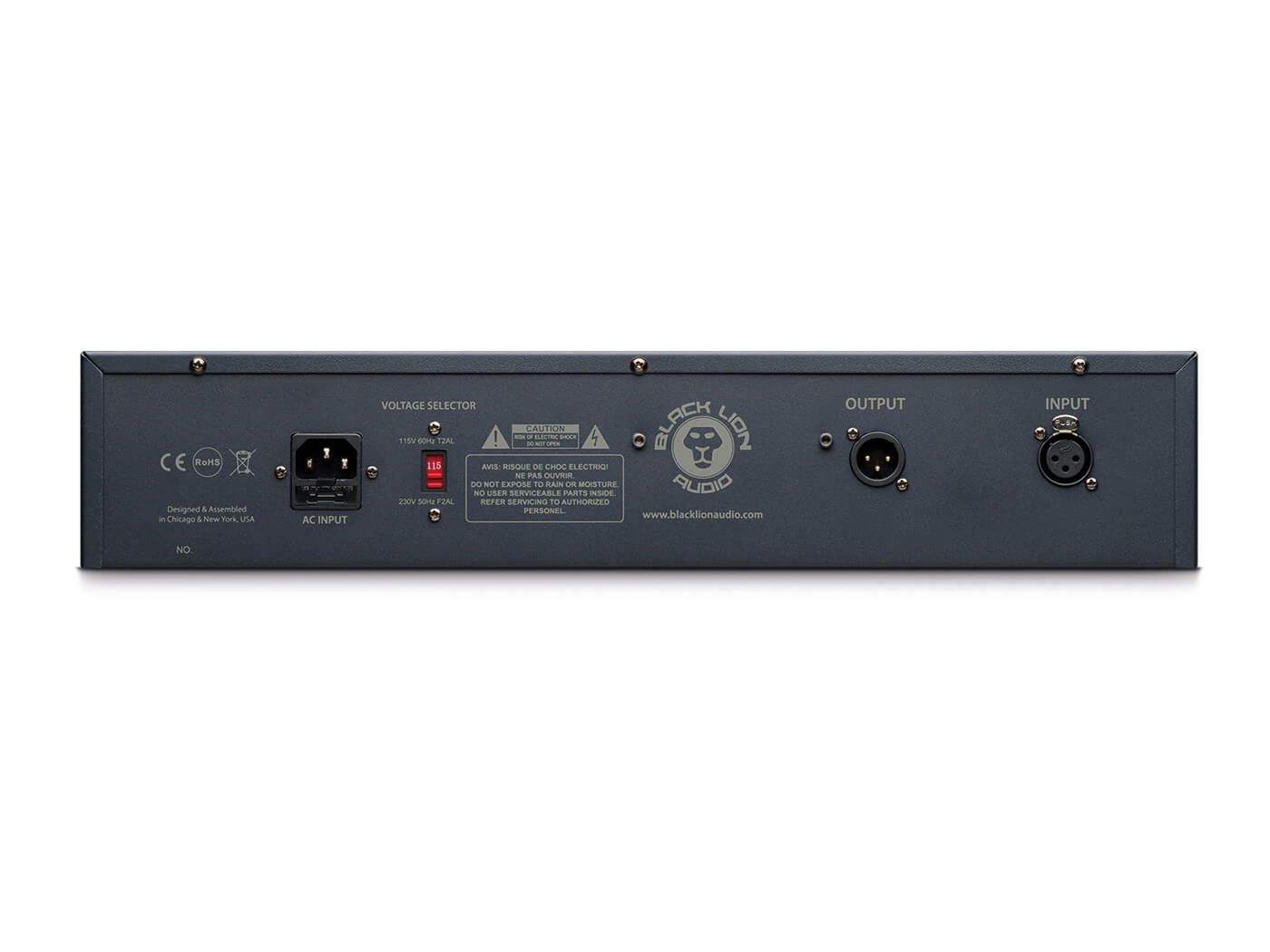 Upper-mid/lower treble frequencies in the 3kHz to 5kHz region are quite explicit, adding bite to electric guitar and lifting the crack of snare drums. Into the extreme high end, the Eighteen becomes a tad sweeter, with the open quality often heard in the best valve designs, like our reference Thermionic Culture Early Bird and Rooster preamps. This scintillating sonic characteristic is even more noticeable when you apply the 16kHz top-boost from the EQ.

Comparing the flat sound (no EQ) of the preamp to some of our 1073-style units, the Eighteen sounds edgier and boasts a shimmering top end, while the Neve clones are smoother overall with a glossy sheen coating the highest frequencies.

Vintage-gear aficionados will notice that the controls for the EQ are similar to those of the Pultec EQP-1A. But while the Eighteen’s functions are similar to the Pultec’s, its knobs more closely resemble those of the Urei 1176 upon which Black Lion’s Seventeen is based. Another departure from the EQP-1A design is the Eighteen’s fully solid-state operation; the original Pultecs were valve-driven. The Eighteen does, however, retain the archaic CPS (cycles per second) and KCS (kilocycles per second) terminology rather than the current standard Hz and kHz. For the sake of modernity though, we’re using Hz and kHz.

Getting with the program

There are two sections of the EQ, for shaping low and high-frequency tones. There are 11 points for lifting high frequencies. The extra points at 1kHz, 1.5kHz and 2kHz are useful for presence – for aiding vocal intelligibility, for example – while the 14kHz option is a great alternative to the 16kHz setting that adds air and space to sources. You have access to high-frequency attenuation (cut) at five EQ points between 4kHz and 20kHz, and the bandwidth of the high-frequency points can be adjusted from sharp to broad.

The low-end frequency control ranges from 20Hz to 150Hz, with the latter being an addition to the four low-frequency points on the original EQP-1A design.
One of the finest functions of this type of ‘program equaliser’ is the ability to simultaneously boost and cut selected frequencies. The way the circuit is configured allows you to create some extremely useful and musical EQ curves, with the celebrated ‘low-end trick’ being a particular favourite.

Selecting your perfect EQ point and the relative amounts of boost and cut is an intuitive and creative process, so don’t be afraid to experiment and make liberal use of the Eighteen’s controls. On kick drums, for example, you can achieve fantastic sounds by selecting 30Hz and setting both cut and boost controls to position seven. This creates a deep, weighty foundation by boosting frequencies at about 80Hz while scooping out some of the low-mids to eliminate muddiness. Beyond this, a medium-sharp boost at about 3kHz can help bring out the click of the kick drum. Add a touch of attenuation at about 12kHz and you’ll round off the sound nicely while creating ample space for true high-frequency content.

It’s worth experimenting with the input and output levels to control the amount of analogue saturation too. Modest amounts of input gain coupled with moderately high output will give you the cleanest tones, and boosting the input and reducing the output will add musically flattering harmonics and, at extreme levels, a touch of grit. This can be used to sensational effect to produce the kind of vintage-style vocal sounds often heard on old Atlantic soul recordings by the likes of Otis Redding and Aretha Franklin, where vocals were recorded hot for maximum impact. 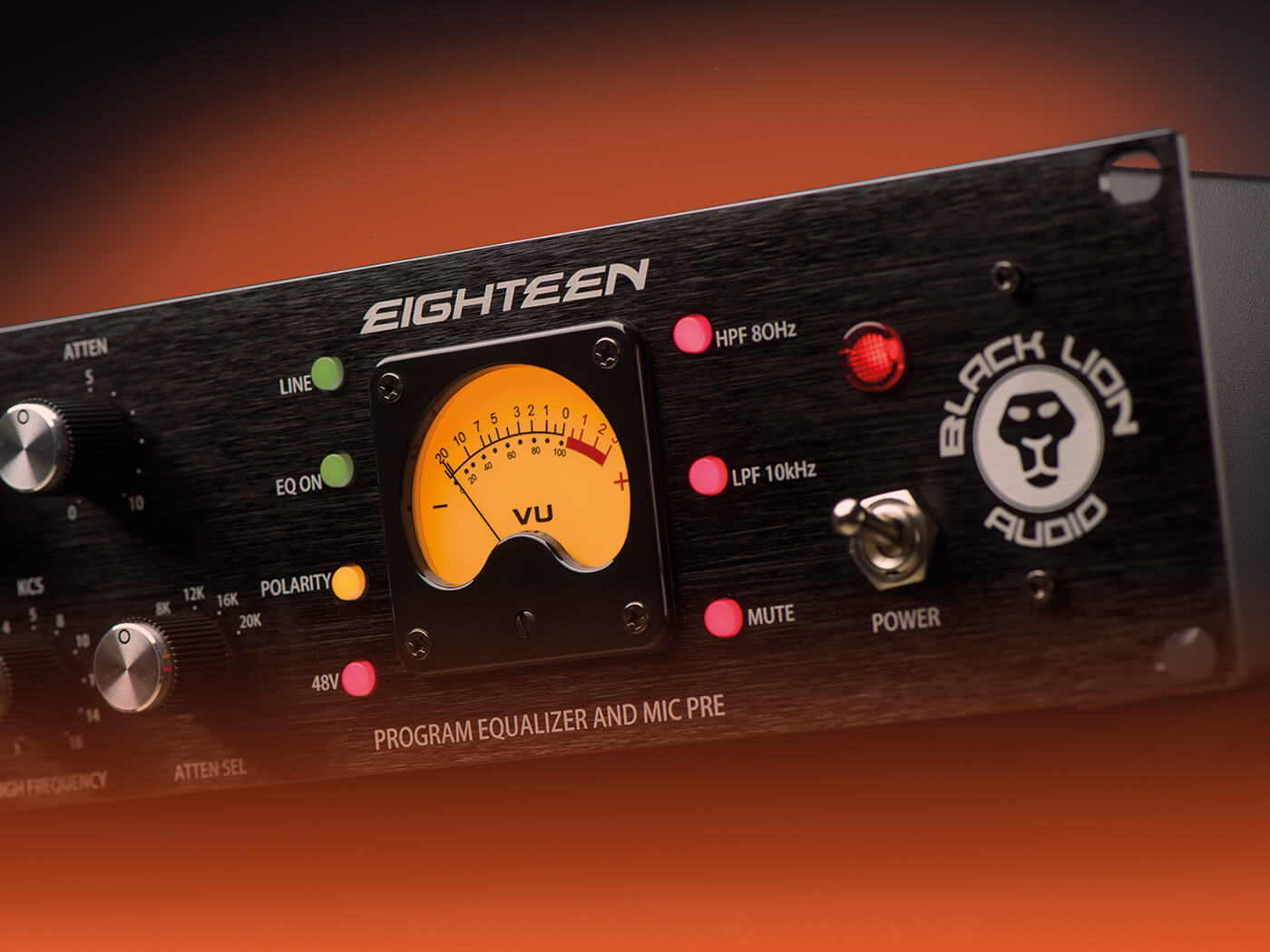 The Eighteen is a brilliant channel strip that provides flexible mic pre-amplification, along with a classic, musical equaliser. The unit doesn’t allow for another outboard unit – a compressor, for instance – to be inserted between the preamp and EQ sections but if you need post-compression tone control, rest assured knowing that the Eighteen can perform as a wonderful standalone EQ too. And, used in conjunction with the brilliant Seventeen – a hot-rodded 1176-style limiter – you’ll have a seriously high-end sounding solid-state signal chain at an incredibly attractive price.

A top-class analogue recording channel input makes all the difference in the digital domain. Plug-ins that emulate vintage kit and effects can go a long way to spicing up audio recorded through clinical-sounding interfaces but little beats creating the vibe at the source. It follows the trash-in, trash-out philosophy of programmers or the front-end-first mantra of audiophiles who realise that upgrading your loudspeakers is pointless if you’re pumping low-grade audio through them.

Aside from the authentic analogue sound of the Eighteen, there’s something satisfyingly tactile about adjusting the relative levels of input and output to inject the right amount of harmonics before sweetening with a touch of EQ on the way in. The Eighteen can also be used as a standalone EQ or to add colouration from the unit’s transformers.

A modern design built on vintage valve tech and featuring Sowter transformer-balanced inputs and outputs, the Rooster has two channels that offer versatile EQ, as well as six levels of tube-driven saturation.