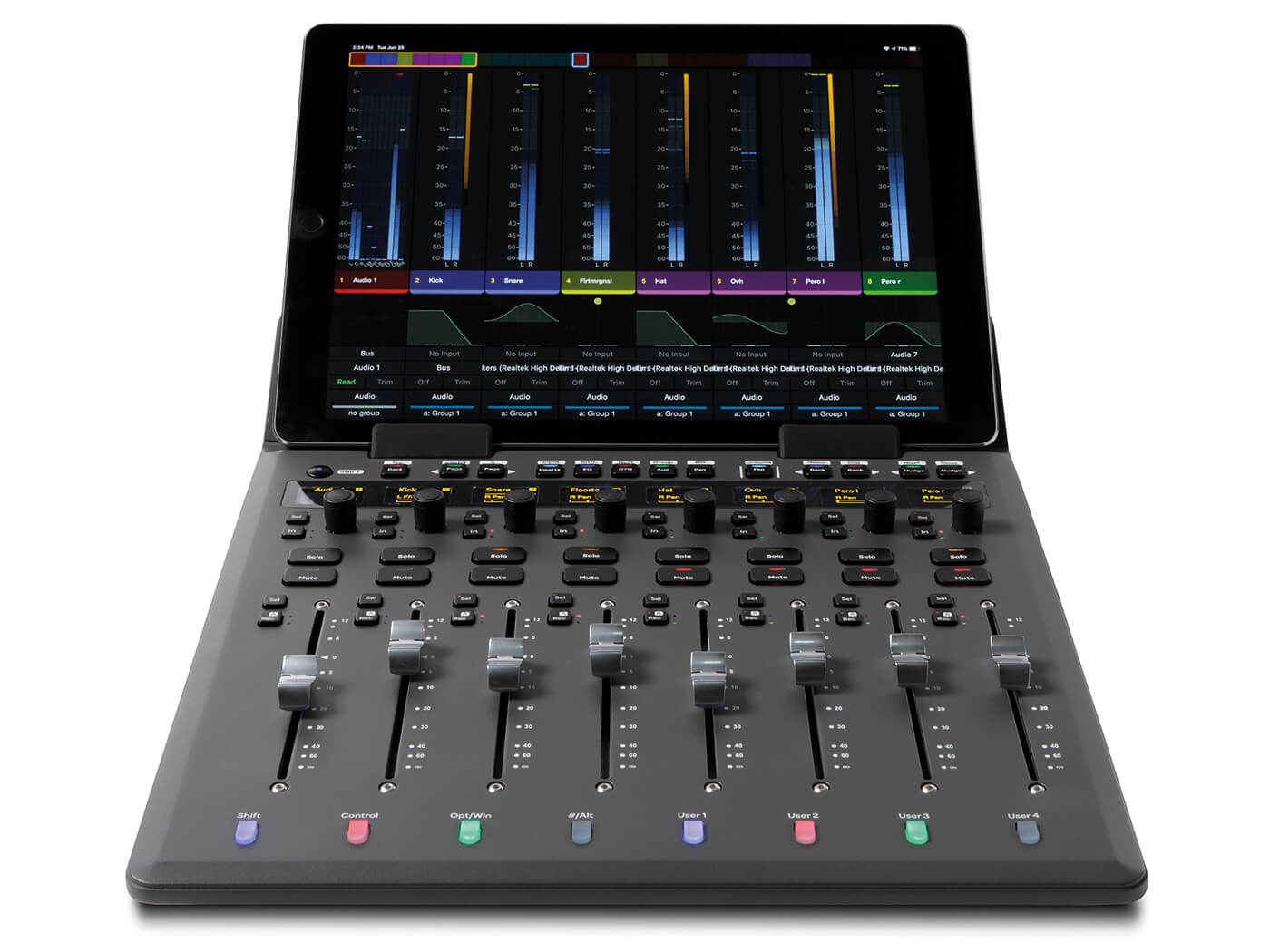 Based on its fully fledged modular S6 mixing desk, released in 2013, Massachusetts-based industry titans Avid launched its slimmed-down S3 mixing system a year later. With its 16 touch-sensitive faders and 32 rotary encoders with accompanying OLED displays, the S3 has seen about six years of reputable service in project studios around the world. Now hoping to ride that goodwill a few steps further is the S1, Avid’s most diminutive hardware mixing system yet.

At about half the width of its big brother the S3, the S1 sports just eight faders and encoders. It packs in more power than it may seem though, as each fader, knob and display channel is a duplicate, meaning that as long as you have an efficient system for navigating to target tracks within your DAW, you’ll be able to accomplish as much with the S1 as you would with its more sizeable competitors. This is a big selling point; with today’s working surfaces strewn with keyboards, monitor controllers, hard drives and more, desk real estate has never been so precious.

That said, even at a slice of the size of the S3, the S1 is bigger than you might expect, clocking in at 312mm wide and 377mm deep. It carries an impressive presence, more so than the eight-fader Avid Artist Mix that it replaces – and, if you feel the need for more faders, you can fasten up to four S1s together, using the in-built magnets or, for a more sturdy solution, the included link plate.

Like the S3, the S1 uses the EuCon protocol for communication, a stable Ethernet-connected system that provides more bandwidth than MIDI-based controllers such as HUI and thus much more control. To give you an idea of how important the EuCon system is to the workings of the S1: you have to get to page 22 of the S1 manual before you get an overview of the product’s physical surface. Prior to this, the manual’s focus is resolutely on setting up the connection between the S1 and the EuControl app, and providing an understanding of how EuCon governs the S1’s functions and interaction with other control surfaces.

The S1 is designed to be used in partnership with an iPad or Android tablet running the free Avid Control app, as well as in conjunction with the separate EuControl app. There is a ledge on the bridge of the S1 in which to slot your tablet, and aesthetically they go together well. The S1 can be operated without a tablet – you can work effectively using a traditional monitor-and-mouse setup – but the two make a phenomenal team.

The touchscreen access of a tablet allows you to rapidly navigate to your target tracks, which the S1’s faders and displays snap to. The two aren’t physically connected – the tablet runs on wifi connected to the top-level app on your computer. You can even use it to create new folders in your Mac’s Finder.

Given that Avid owns the EuCon protocol, you’d be forgiven for thinking that the S1 is a Pro Tools-specific controller. However, Avid have encouraged other DAW-makers to adopt EuCon and, as a result, the S1 works with Logic Pro, Cubase and Nuendo, leaving the notable non-conformists as Ableton Live, REAPER, Studio One and the new kid on the block, UA’s Luna.

Apart from the Ethernet socket, there’s little else in the way of connections on the back of the S1. There’s an external DC input from the supplied mains transformer, a USB socket for charging your tablet and a ¼-inch footswitch socket for a pedal, which can be configured for punch in/out or talkback switching.

Atop the panel, there are eight identical channels, each with a fader, mute and solo buttons, an OLED display and an encoding knob. Each channel also has buttons for select, record and in/out actions. Above the channels is a row of 13 buttons – with an accompanying Shift button that effectively doubles this to 26 – used to access specific functions and for navigation, allowing you to, for example, shuffle through tracks in banks of eight, bring your target track to the surface, and select effects and options with which to adjust using the channel’s encoders.

There’s also a Flip button that swaps the faders’ functions with those of the encoders and vice versa, which can be useful for tasks such as setting up foldback mixes on an aux send. The OLED display on each channel shows its track name and the currently assigned function of its encoder.

Below the channels are eight soft keys: four user-assignable commands for your most used actions and four that duplicate the modifier keys on your computer keyboard. The latter isn’t terribly useful on this surface but you can reassign them as four additional user keys from within EuControl. 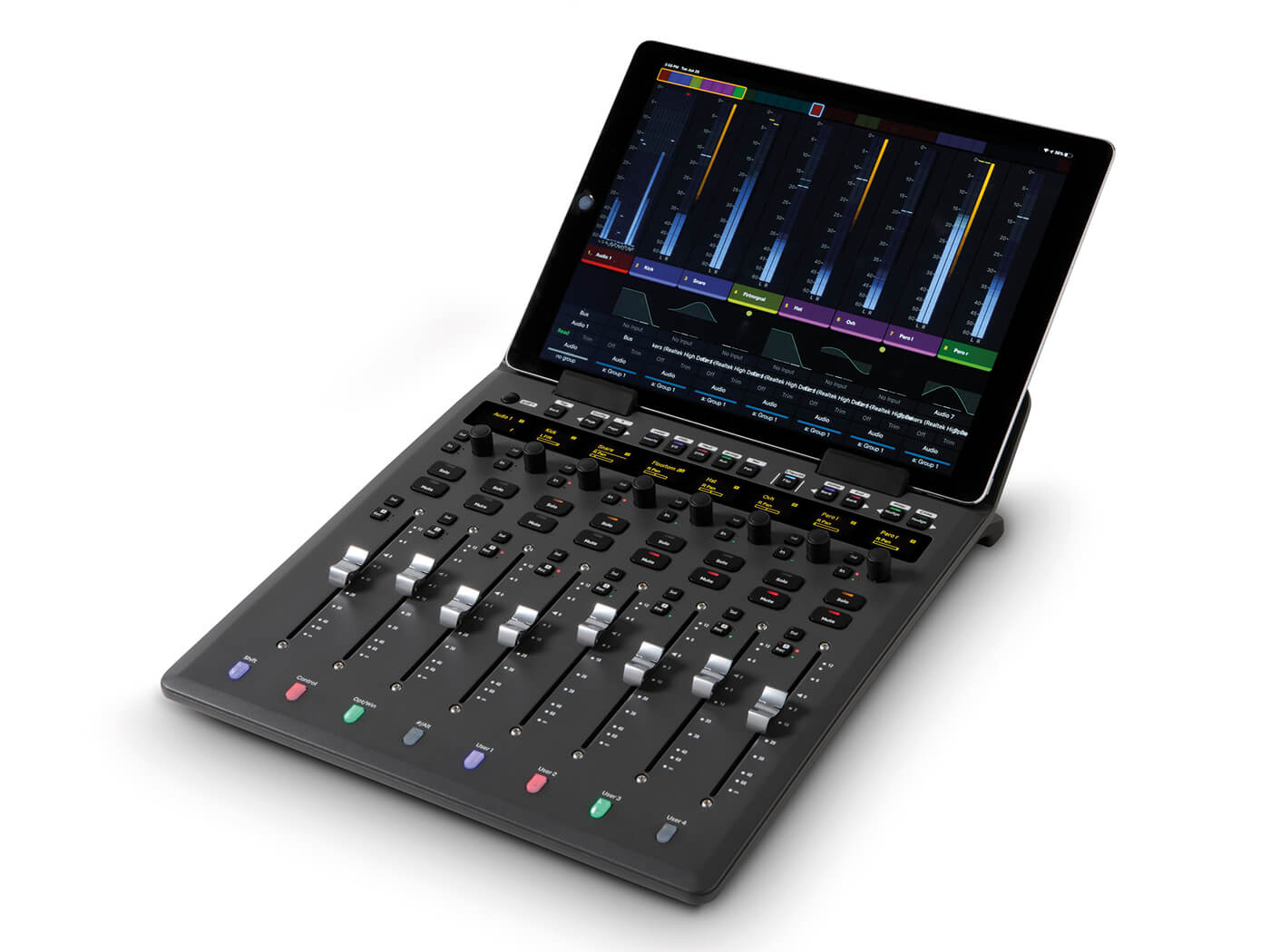 Upon plugging in the S1, it seems that you’ll be able to start using it immediately. You can see the active tracks via the OLED display and you can use the faders, cuts and solos to begin balancing your mix. The S1 makes mixing marvellously intuitive and if this is all the functionality you want away from the more reassuring environment of the monitor and mouse, that’s fine.

With time though, you might start incorporating more of the surface possibilities into your workflow – the Flip function, pans and auxes are easy to get used to. You’re probably less likely to want to edit plug-ins away from the safety of the monitor and mouse but, as you get to grips with customising user keys on the S1, you’ll see just how quickly it can help you navigate your DAW.

The EuControl settings allow for assignable fader groups, called Layouts, that provide instant access to, for example, all your drum tracks or auxes. You can lock master faders or talkback sources to one channel, and set up any other combination you want access to. Another way to rapidly navigate your DAW via the S1 is VCA Spill. After setting up VCA groups of drum tracks, for example, you can bring them all into play instantly by double-clicking the VCA master fader’s Select button. This navigation is made quicker still when combined with a tablet running Avid Control – all you have to do is tap the VCA master track, which can sit more or less in permanent view.

The S1’s improved features and increased keys makes it a vast improvement over the Artist Mix surface. The fact that you can combine up to four S1 units for a total of 32 faders even threatens the existence of its older sibling, the S3. Although it functions fine on its own, not combining the S1 with a tablet running the free Avid Control app would be missing out – it really opens up a new world of operational possibilities.

Despite being an Avid product, the S1’s underlying EuCon communication protocol allows seamless integration with Apple’s Logic Pro and Steinberg’s Cubase and Nuendo. So there’s no need to shy away from it if you’re not a Pro Tools aficionado.

Some of you may think of the S1 as little more than a glorified mouse and, in a sense, you’re right. You don’t /need/ this because you can do everything the S1 does already, using your monitor and mouse. But begin using the S1 and integrating its features into your workflow, and you’ll see just how much quicker you can do tasks that once seemed laborious by comparison.

When you realise how much time the S1 could save you, maybe you will feel like you need it. Ultimately, this mixing platform makes life dramatically easier, even if it at first seems like a departure from your tried-and-tested methods.

There are no EuCon-based eight-fader alternatives – and that’s because Avid doesn’t allow other manufacturers to make them. Their docks have a single-fader channel and incorporate the Avid Control app. The other eight-fader controllers are all HUI/MIDI but, by comparison, they’re much less expensive. We recommend the well-integrated Presonus FaderPort 8 and Softube Console 1 both.