The Viennese brand’s OC-series microphones were remarkable. Can the company’s first foray into the headphone world maintain its reputation? 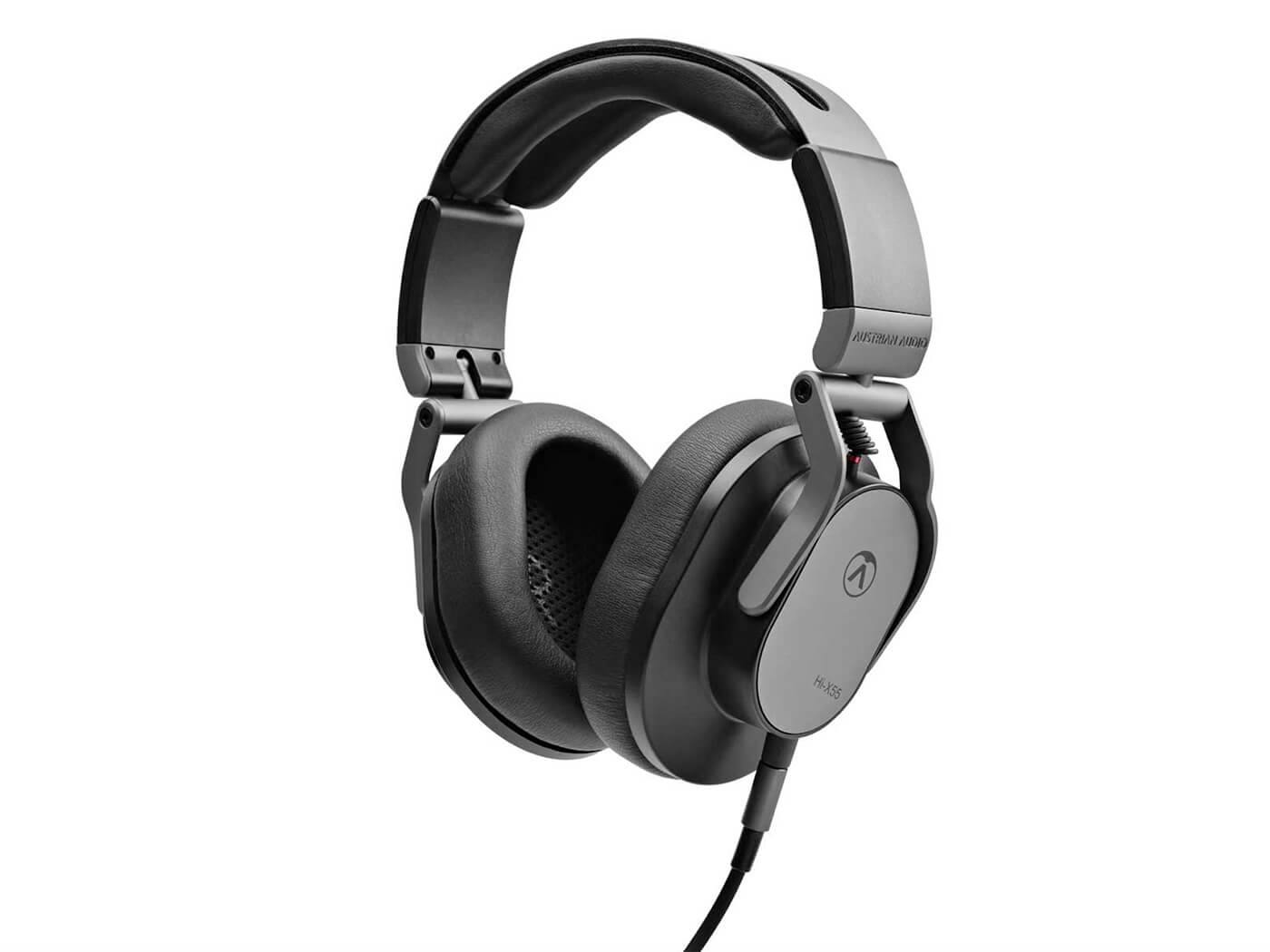 At NAMM 2020 in January, we spied two new headphones from Austrian Audio, both designed for professional studio use. The Hi-X50 is an on-ear design, while the pair we’re examining here is the circumaural (over-ear) Hi-X55s. They come with a good-quality 3m detachable cable featuring a 3.5mm (1/8 inch) plug and 6.3mm (1/4 inch) adapter. This is fantastic, as I’ve lost count of the number of headphones I’ve seen junked due to a faulty captive lead.

Weighing in at 305g (without the cable), the headphones are lightweight yet durable, with many of its components, including the hinges, made from metal. They have a foldable construction for easy storage and transportation, and feature soft slow-retention memory foam earpads, making them exceptionally comfortable during those lengthy monitoring sessions. They’re angled to sit snugly over the ears and, while their design isn’t strictly of the noise-cancelling variety, they do reduce a significant amount of unwanted external sound.

Austrian Audio is a relative newcomer to the world of transducer design and manufacture, with only four products in their range – the other two being the OC18 and OC818 microphones that we reviewed favourably in 2019. While the Vienna-based company has only been active for about three years, it draws on decades of expertise in all manner of transducer technology. That’s because, following the closure of the AKG offices in Wien, many of its former employees joined Austrian Audio, bringing with them highly tuned acoustics, electronics and mechanical-design skills.

Hi-X is shorthand for high-excursion technology, which the company’s engineers employ. It allows the headphones’ drivers to move air without unwanted movement of the diaphragm, and is achieved by utilising an ultra-stiff membrane that minimises unwanted resonances. This membrane, like all the components in the Hi-X55s’ drivers, was designed in-house; Austrian Audio use no off-the-shelf transducers in their products.

Each driver is 44mm – the optimum size according to both the company’s scientific measurements and comprehensive listening tests – and employs a ring-magnet system originally developed by the company’s engineers for AKG’s award-winning headphones. This facilitates improved airflow and, it’s claimed, the strongest magnetic field in its class.

Along with a copper-clad aluminium voice coil, the ring magnet reduces the weight of the membrane, enabling it to quickly change direction, providing lightning-fast impulse reactions. This also translates into trip-hammer transient response times and ensures the drivers can handle sharp dynamic spikes, which can occur in uncompressed work-in-progress recordings.

Frequency response is quoted as 5Hz to 28kHz – well beyond the limits of human hearing – and impedance is measured at 25ohms, making them suitable for connecting to both professional equipment and mobile devices. Be aware, though, that the high resolution of the Hi-X55s will not only tell you the truth about your recordings but also reveal the limitations of any device into which they’re hooked up. 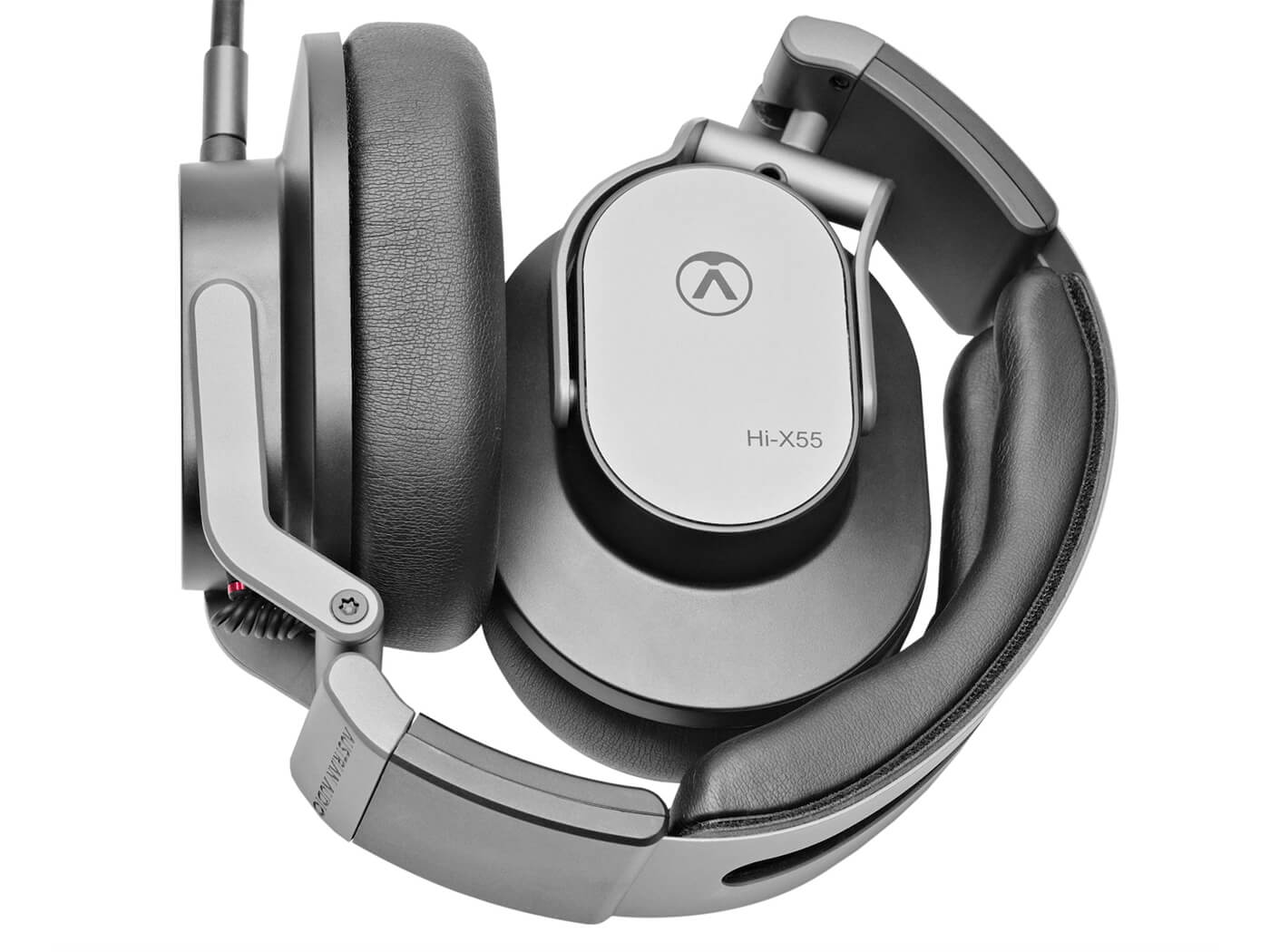 After unboxing the Hi-X55s and attaching the cable, I spend some time looking for the markings that help users differentiate between the left and right sides. After a few minutes, I give up, as there are no such markings anywhere to be found. This isn’t a problem, however, as the headphones are angled in such a way as to make it clear which way they should be worn.

[EDIT: The review unit provided to us did not have the L and R markings on the earpads, although we can confirm that the commercially available product does feature these indications]

I find them snug and comfortable. The raked angle of the earpieces perfectly envelops my ears, and ambient noise in the room is diminished greatly.

After plugging them into the studio’s headphone amplifier, I play some mixes I’ve been working on, as I know exactly what’s going on in these recordings. This is synth-heavy highly processed pop with many production effects scattered throughout the complex arrangements, including short blasts of repeat echo and touches of spot-reverb. The Hi-X55s highlight all of these production effects in great detail, while making individual elements of the busy midrange easily distinguishable. Stereo effects, including ping-pong delay, are more apparent than when listening on monitors, even a highly revealing ATC monitoring system.

Initial impressions suggest that these headphones might be light on low end, however, when replaying tracks with sub-bass, the Hi-X55s dig deep to deliver content far below 40Hz. In this respect, they easily match my go-to Beyerdynamic DT 150 studio headphones. What the Hi-X55s absolutely don’t do is hype the mid-bass area around the 100Hz level to give a false impression of strong bass. 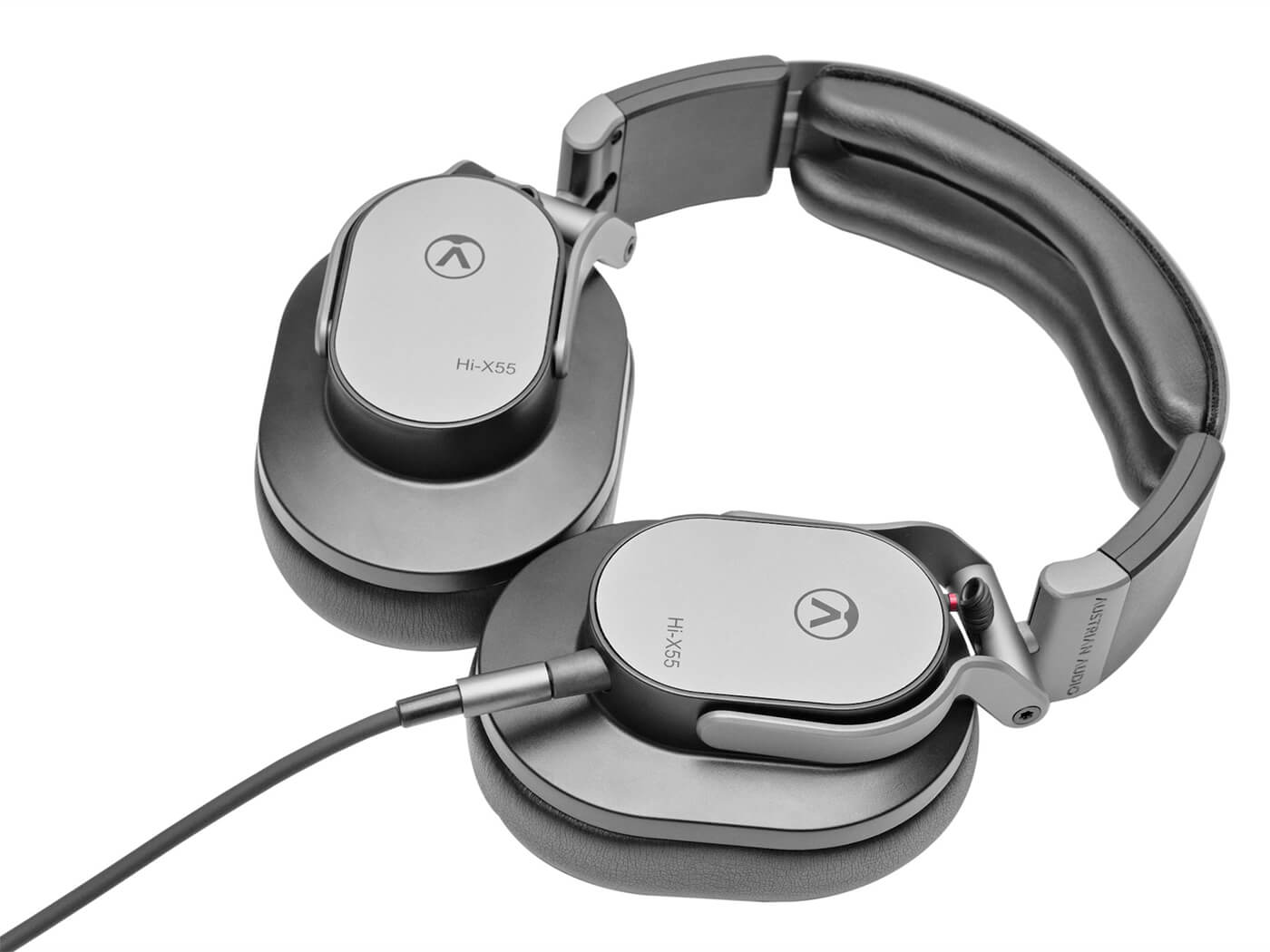 Following my initial monitoring session in the studio, I take the headphones home to further get to grips with them. To be honest, I use headphones sparingly in a studio environment, as I prefer to use monitors for tracking and mixing. However, I like to check mixes – both work-in-progress and finished – on headphones at home, where I can relax with a glass of wine and adopt a different perspective on the day’s work.

At home, I use Master & Dynamic on-ear headphones that retail at about £100 more than the Hi-X55s’ over-ear design, and the sound of the two differing models couldn’t be more different. Whereas the M&D headphones possess an intimate quality that seems to inject the music directly into the ear canal, the Hi-X55s have a far more spacious sound. Headphone monitoring can sometimes be a little claustrophobic, yet the Hi-X55s avoid this with a cavernous soundstage that images well beyond the confines of the headphones themselves.

Leaving aside productions of my own, I listen to some familiar material that I trust to highlight strengths or weaknesses of monitoring equipment.

Playing The Beatles’ Come Together confirms that the Hi-X55s are capable of revealing filigree details that your average earbuds would likely overlook. The second word of John Lennon’s opening refrain, “shoot me,” often gets buried beneath Paul McCartney’s swampy bass line but, here, it is presented so clearly that it’s possible to count the repeats of the vocal’s tape-echo effect.

Kate Bush’s debut album The Kick Inside – another brilliant Abbey Road Studios recording – is an ideal test disc. The Hi-X55s deliver Bush’s icy vocals without making them overly shrill during opening track Moving, while the piano sounds terrifically vibrant, and there’s a real depth and solidity when the bass guitar kicks in.

Austrian Audio has created a superb set of headphones in the Hi-X55s. Their sound-for-pound cannot be faulted and, in many respects, especially with regard to the capacious soundstage, they outperform some more costly designs. If I am to be critical, I detect a slightly cupped-hands quality in the midrange area, where the vocals reside. Apart from that, there’s nothing here to criticise and plenty to commend. If you’re thinking of spending up to £300 on a pair of headphones, these should be at the top of your audition list.

Headphones are an essential purchase for most recording engineers, if only to facilitate overdubbing. Most professional studios have several pairs for this task, however, they’re rarely expensive models and usually of average fidelity at best. Crucial checking of mixes is another matter, for which fidelity is paramount.

As an old-school studio engineer, I prefer to mix through monitors and usually restrict the auditioning of mixes on headphones to when I’m at home. Now that many producers work from home, where the repeated plays of work-in-progress mixes could prove a noisy issue with nosy neighbours, headphone-mixing from scratch is becoming more commonplace. If that’s how you work, you should consider investing in high-quality cans such as the Hi-X55s. 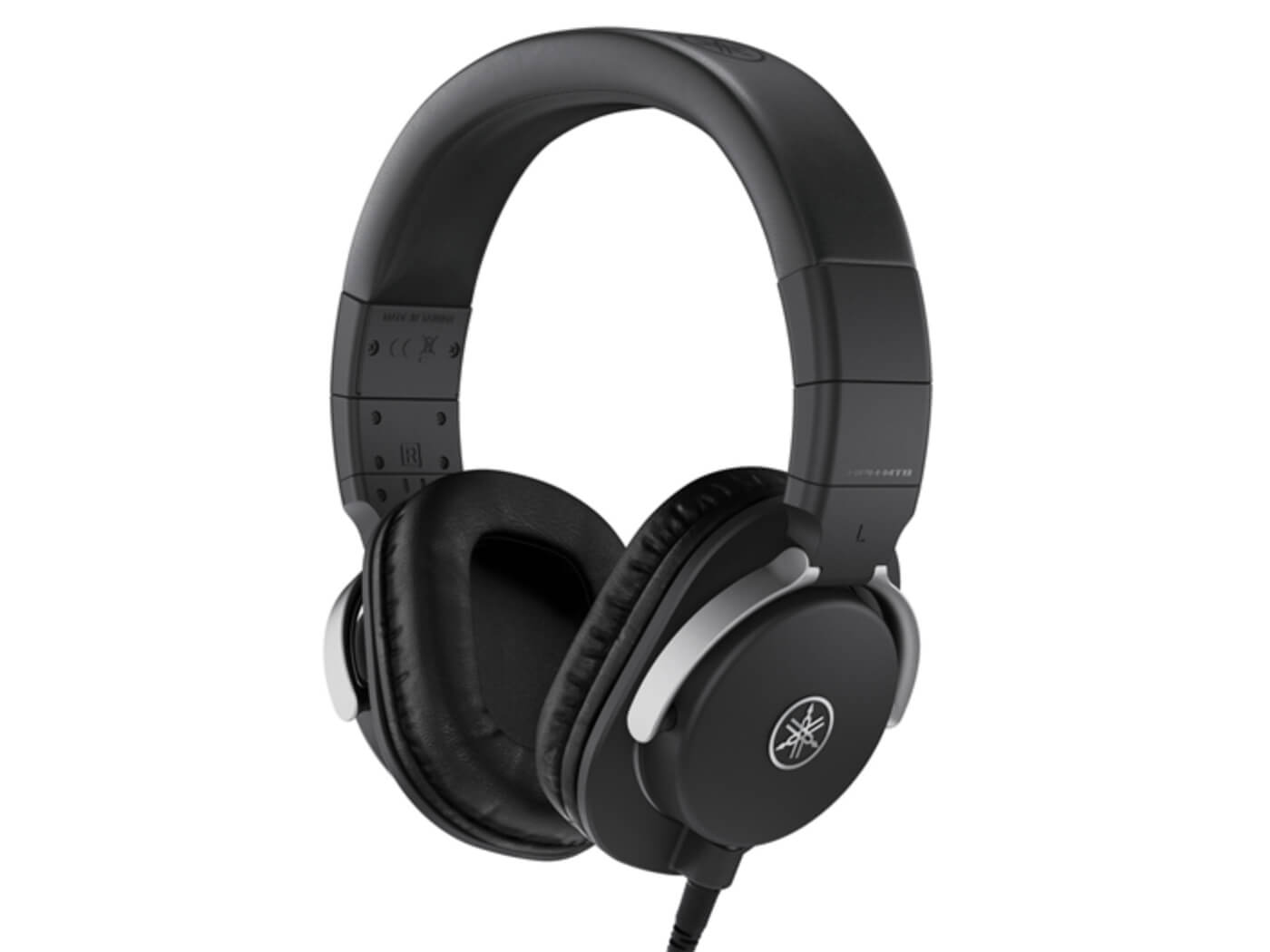 The MT8s are at the affordable edge of Yamaha’s range, yet we felt their level of detail to be as good as some models that cost four times the price. Their excellent separation between midrange and bass registers is rare at this price point. 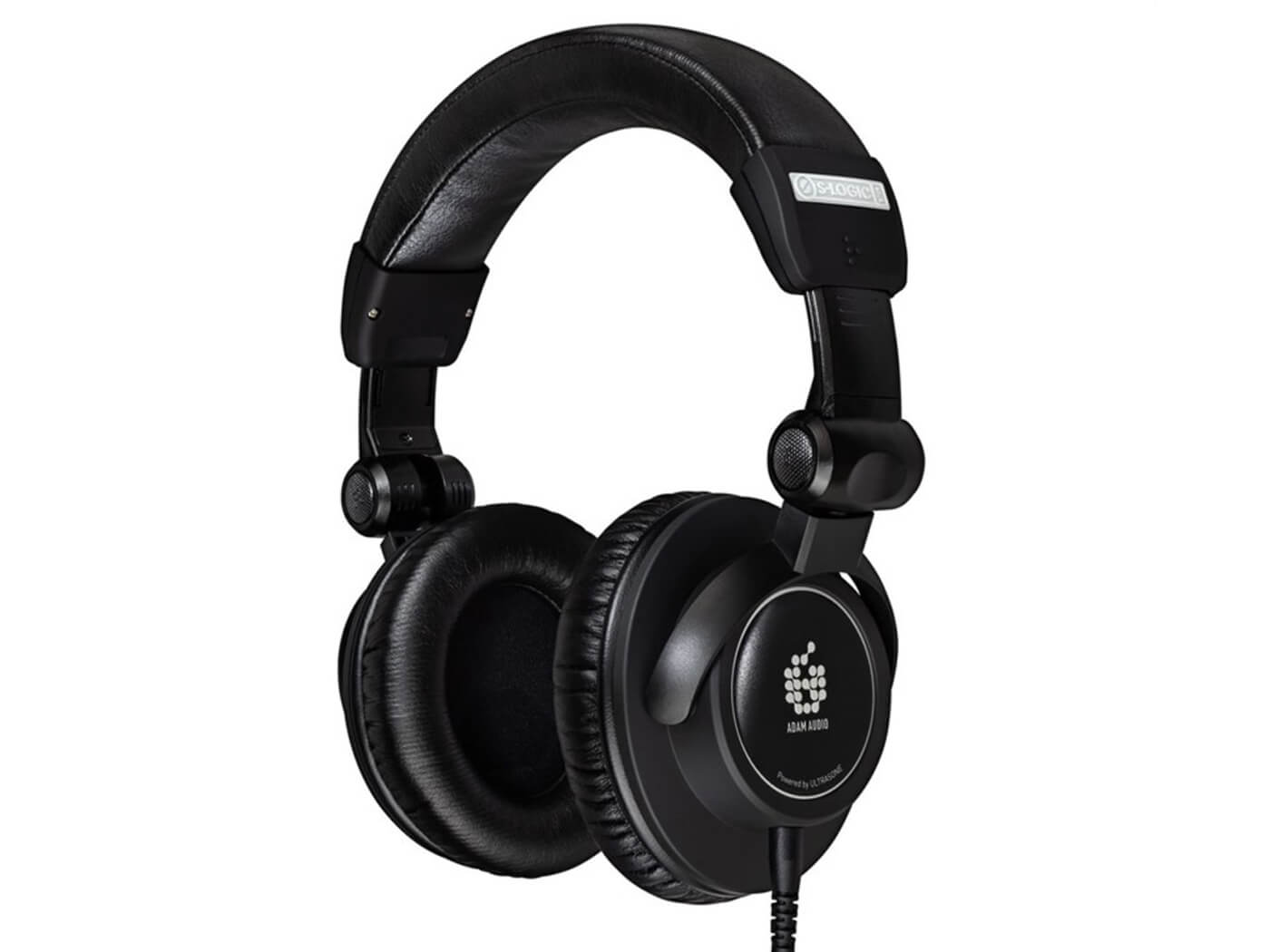 Among our favourite headphones regardless of price, these deliver a rich mix experience with a full-range response and pinpoint-accurate stereo imaging. Equally as good as higher-priced stereo monitors.