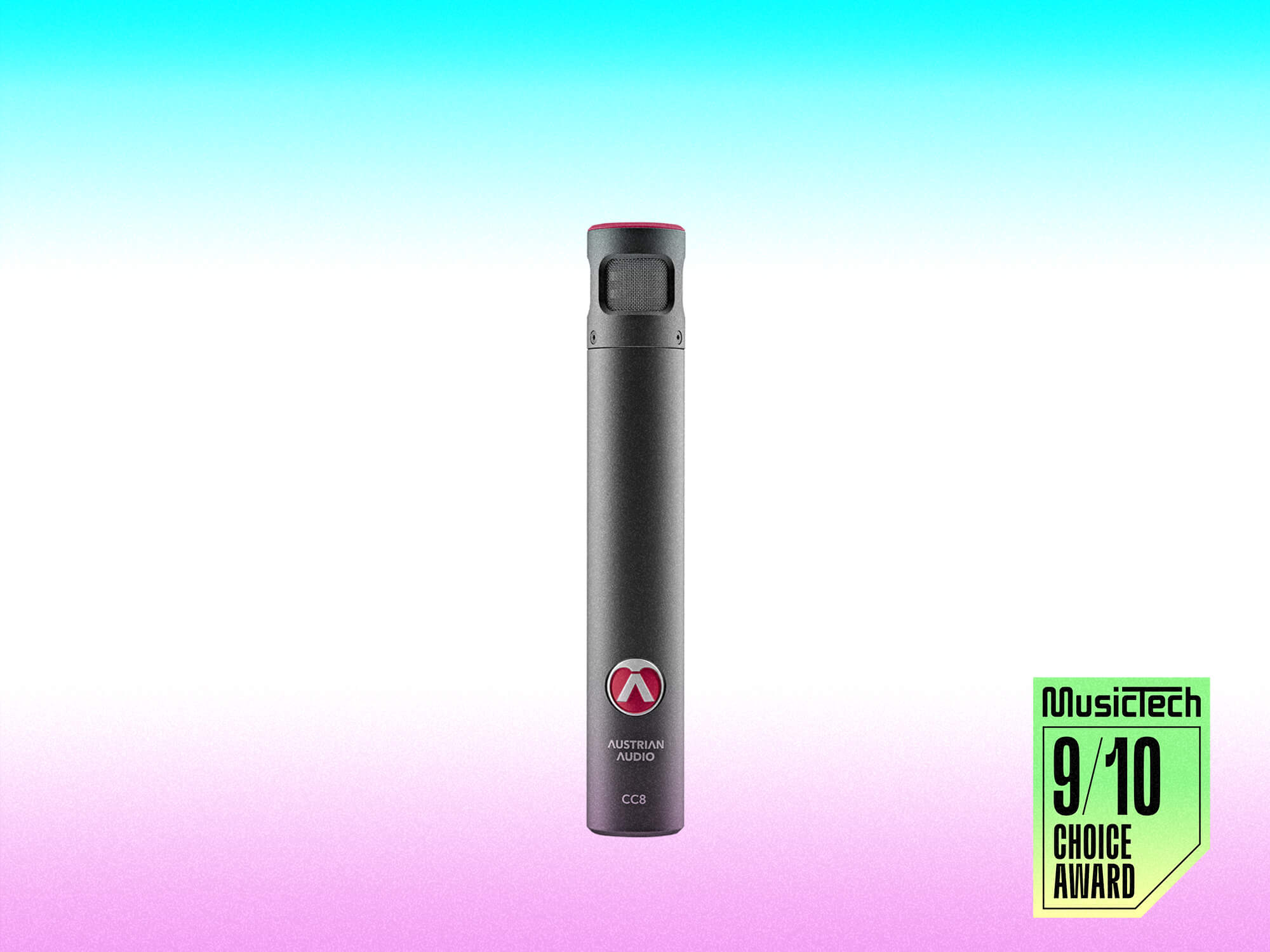 Relative newcomer to the pro-audio world Austrian Audio is rapidly expanding its range of professional transducers. Its latest addition is the CC8, a small diaphragm condenser microphone with a fixed cardioid polar pattern. It’s available as a single unit or a stereo pair, which is what I tested here.

Handling the microphone is a pleasure as the all-metal housing, cap and grill make the mic nice and weighty, which inspires confidence that it will ruggedly withstand many years of (careful) professional use. This is no cheap, plastic pencil mic that only gets pressed into service when all the ‘good’ mics are already in use. 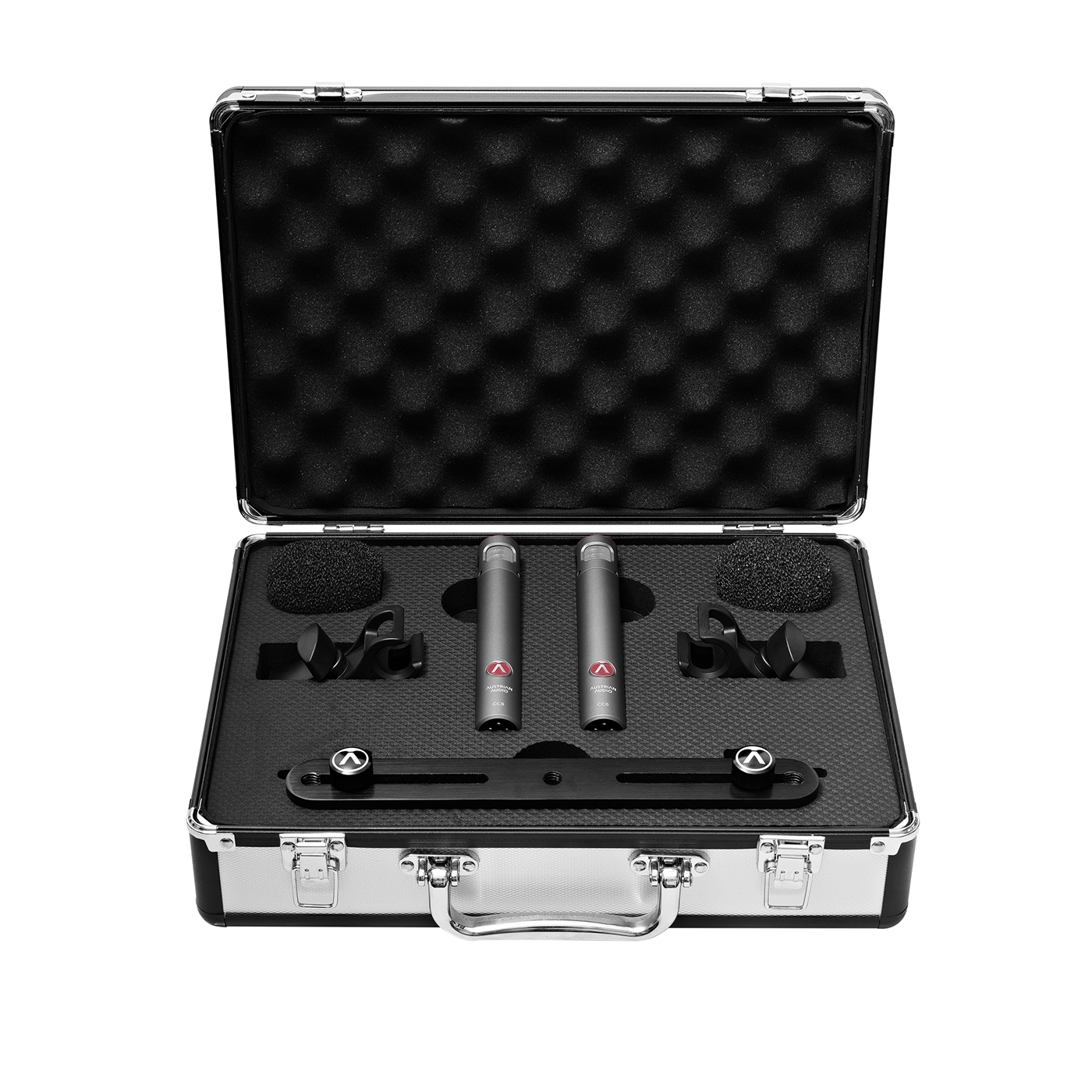 Integral to the mic is the newly-designed OCC7 true condenser capsule, inspired by the legendary CK1 capsule developed by AKG in the 1960s. Followers of Austrian Audio will know that the company was formed by ex-AKG staff, so it seems logical they would build upon their own historical engineering expertise to develop new products.

The new OCC7 capsule features an all-new design, while still retaining the open and natural sonic signature of the classic CK1. Its diaphragm is made of three-micron thick gold-coated polyethylene naphthalate (PEN), which Austrian Audio claims is more robust than the conventional Mylar often used in CK1 style diaphragms.

Each capsule is hand-built in the company’s factory in Vienna, then measured and tuned in their anechoic chamber to a tolerance of +/- 0.5dB (max) sensitivity at 1kHz. This, coupled with the mic’s transformerless electronics, is designed for a linear response and, despite these review samples being a stereo ‘pair’, makes any two (or more) mics a good match.

Classic small diaphragm condenser mics have a reputation for delicacy, both in terms of the filigree sound they capture and their fragile nature. You don’t want to be pointing a vintage CK1-equipped mic down the throat of a Marshall rig cranked to eleven.

The new CC8, however, is a far more robust tool. With a quoted max SPL handling of 156dB without distortion, it can be used to record heavily amplified sounds as well as loud bursts from close-mic’d drums.

It’s useful then that the CC8 features a switchable pad offering -10dB or -20dB of attenuation. Beneath the pad switch sits a switch to engage a high-pass-filter, which operates at 60Hz or 120Hz (both second order). These two switches make the CC8 capable of dealing with anything from full-range audio at high SPLs with the pad engaged, to the quietest finger-cymbals and shakers with low-end crud filtered out.
The stereo set comes in a sturdy, foam-lined metal carrying case, which contains the two microphones, a mic-clip and windshield for each and a stereo bar that fits to any regular mic stand.

Upon opening the case it’s obvious we’re dealing with a quality product as each component is neatly embedded in its own slot in the foam lining. This feeling of luxury is reinforced as soon as one of the mics is in hand, as it feels suitably weighty and looks solidly engineered. Switches for the high-pass-filters and pads are inset so there is less likelihood of either function being accidentally engaged or disengaged than if the switches were protruding. This also maintains the sleek profile and smoothness of the microphone. 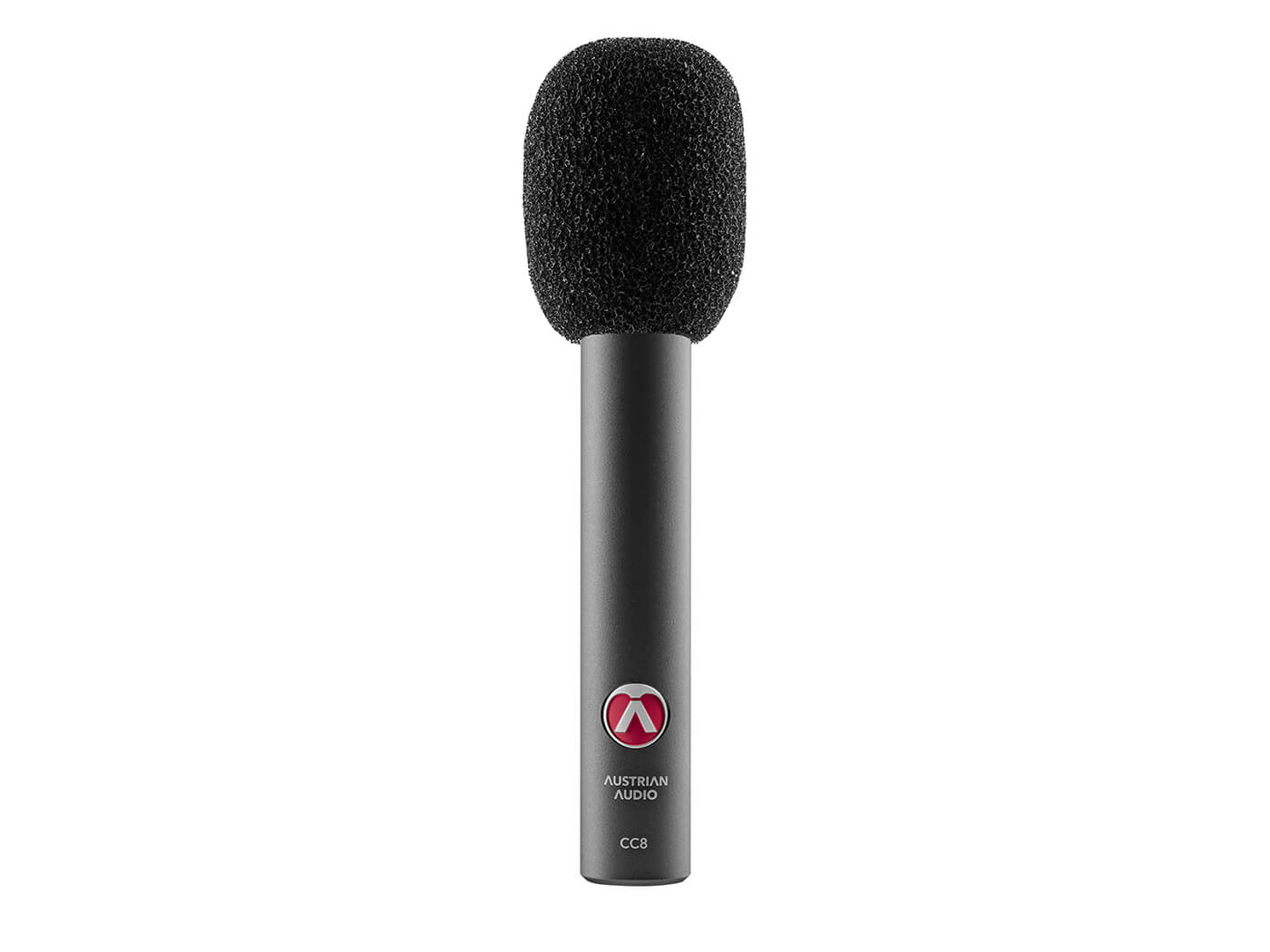 As top-quality small diaphragm condenser mics are particularly good at capturing the natural sound of acoustic instruments, I set up a single mic to record my Seagull acoustic guitar. This instrument has a full, rich timbre which low-budget mics usually fail to capture faithfully.

Since our aim here is to assess the accuracy of the CC8’s tonal balance, I connected it to a Lev Solutions Integrity mic preamplifier, which is the most transparent and least characterful of my mic-pres. It’s also a transformerless design like the CC8 so it felt like a natural move to use it in this context. For comparison, I connected a Neumann KM84i to the second channel of the Lev.

Listening to the playback from the CC8 recording, I heard an extremely accurate portrayal of the guitar. Transients were crisp with no smearing or slurring, yet don’t overwhelm the overall sound. The richness of tone I cherish from my Seagull was reproduced as faithfully as I’ve heard from any microphone. It brought back memories of the Rode TF5 in terms of its transparency — however, the Rode pair retails at around £1,200, a good deal more than the Austrian Audio set.

Compared with the Neumann, the CC8 sounds more balanced throughout the frequency range and offers a more extended and icily clear top-end. The more midrange-prominent KM84i recording cried out for a healthy injection of super-top ‘air’ to help it along. The CC8 also picks up less room sound than the KM84i, sounding more tightly focused and direct.

Although I have no doubt that the two CC8s would be perfectly matched, I did the necessary A/B test and, as expected, they sounded identical. Be aware, though, that although the supplied stereo bar is useful, it isn’t shockproof, so a compatible shock-mount will be useful to avoid bumps and thumps.

Later, I set up the pair (without the stereo bar) as drum overheads to record a nicely tuned kit adopting the three-mic Glyn Johns technique with the stereo pair augmented with an AKG D112 on the kick drum. I often use a pair of AKG C414 ULS mics for this method as they have a lovely woody character. By contrast, the CC8s sounded more focused with less obvious character.

In some respects it’s easier to describe mics with bags of character or even poorer quality ones with obvious faults and compromises. The CC8 set presents such an open window to the sound source that words such as accurate, transparent, faithful, and honest say pretty much everything about the performance.

One aspect where the CC8 excels at is its astonishingly low self-noise. This, I feel, adds to the sense of inky-black silence that occurs between musical passages and individual notes, creating a finely-etched sound with plenty of detail without added brightness or hyped treble.

The CC8 is a brilliant small diaphragm condenser microphone, especially at its price point, as it performs as well as any other sonically transparent mic I’ve heard. Mind you, I’ll still probably prefer a good old SM57 on an overdriven Marshall cab, but for making filigree recordings, Austrian Audio’s new pencil mic has it covered. 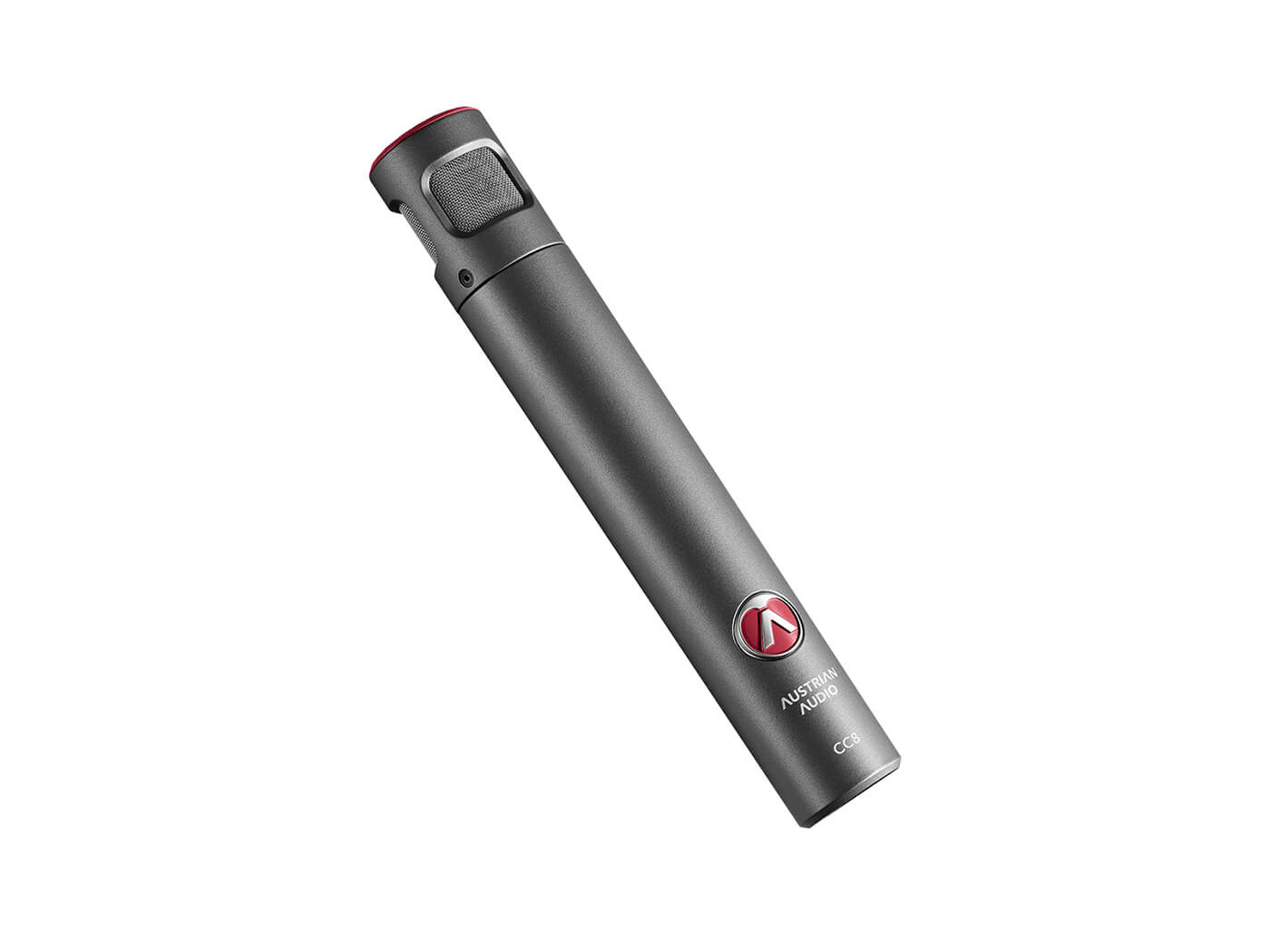