Audio-Technica AT2020USB-X review: A compact USB-C mic that takes away the hassle of vocal recording

Now upgraded with added USB-C connectivity, does Audio Technica’s latest make a compelling case for inclusion in your setup? 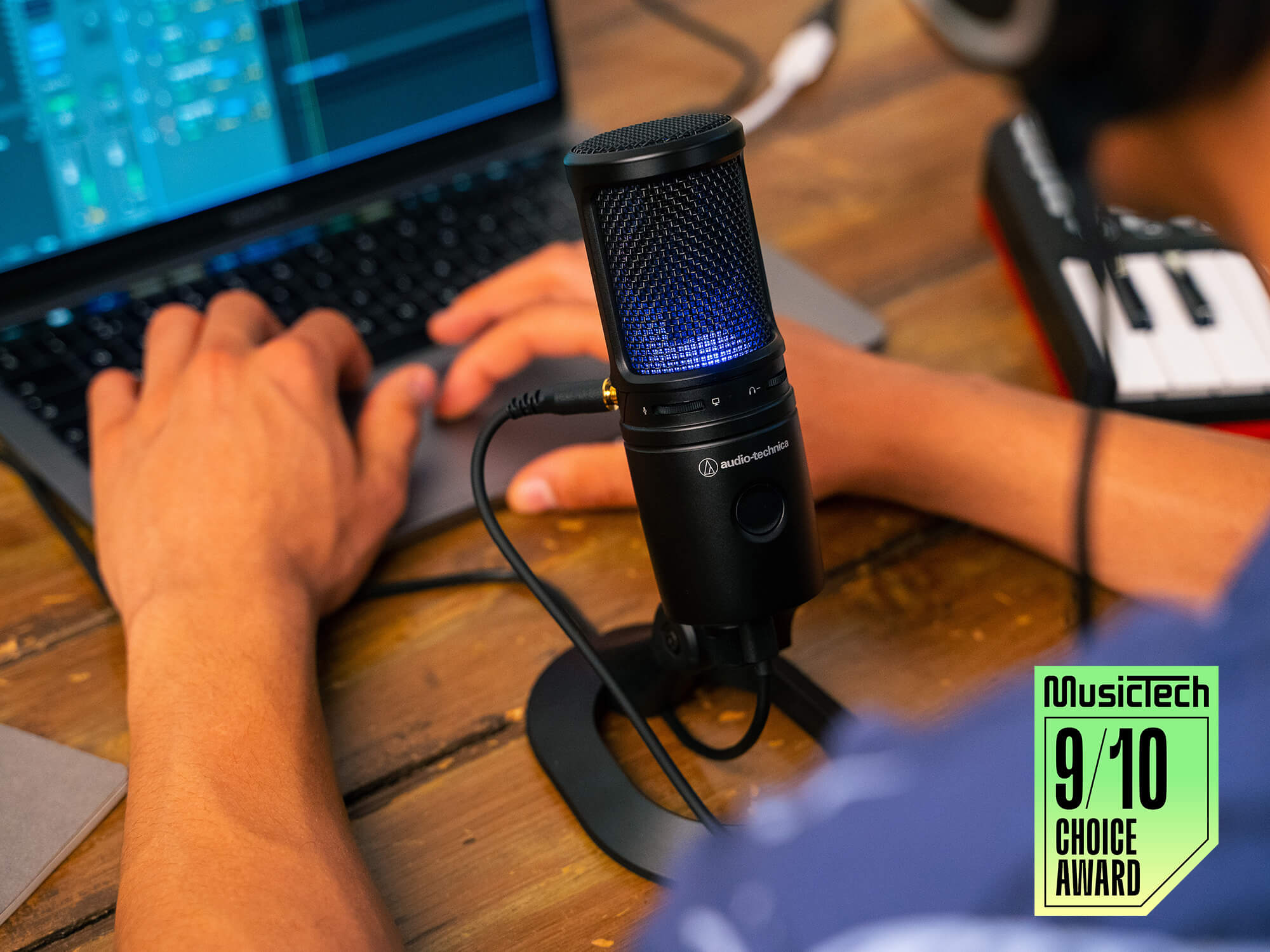 ⊖ No on-body level display
⊖ No built-in popshield, which may bother some users

After 44 years of designing studio-grade mics, Audio-Technica has turned its attention to consumer-focused model aimed at content creators. Its latest is the AT2020USB-X, billed as a “reimagining” of the popular AT2020USB+ that adds some modern features while retaining a near-identical price point. The name might be a mouthful, but at least it’s quicker to plug in than it is to pronounce.

The mic’s form factor is similar to many competing plug-and-play desktop condenser microphones, which are also designed to be user-friendly regardless of recording expertise. The explosion of popularity in the podcasting and streaming worlds in the past few years is surely a contributing factor, too. Thankfully, we are a long way past the idea of a USB mic meaning inferior performance compared to XLR mics.

Audio-Technica’s mic is more compact than you might expect at just 142mm long and 373g in weight but sports a sleek and robust finish. It comes with a desktop stand and a 3/8″-16 to 5/8″-27 threaded adapter for mounting onto other stands – for example, a floating boom stand for radio-style presenting for when you want wax lyrical about your favourite music. Happily, you can angle the desktop stand and, with a screw handle, you can tighten it to make sure it doesn’t slip – even if set at an extreme angle.

Power and data are handled over USB and in the box you get a USB-C to USB-A cable, with the USB-C end connecting to the base of the microphone, keeping it fairly tidy and out of the way. A small USB-A-to-C adapter is also supplied that you can attach to the cable to convert it to full end-to-end USB-C operation. Manufacturers will probably continue to be in limbo for a few years with USB as, frustratingly, older devices still sport USB-A while newer ones don USB-C. Still, Audio-Technica’s inclusion of USB-C to this mic future-proofs it as far as is possible. 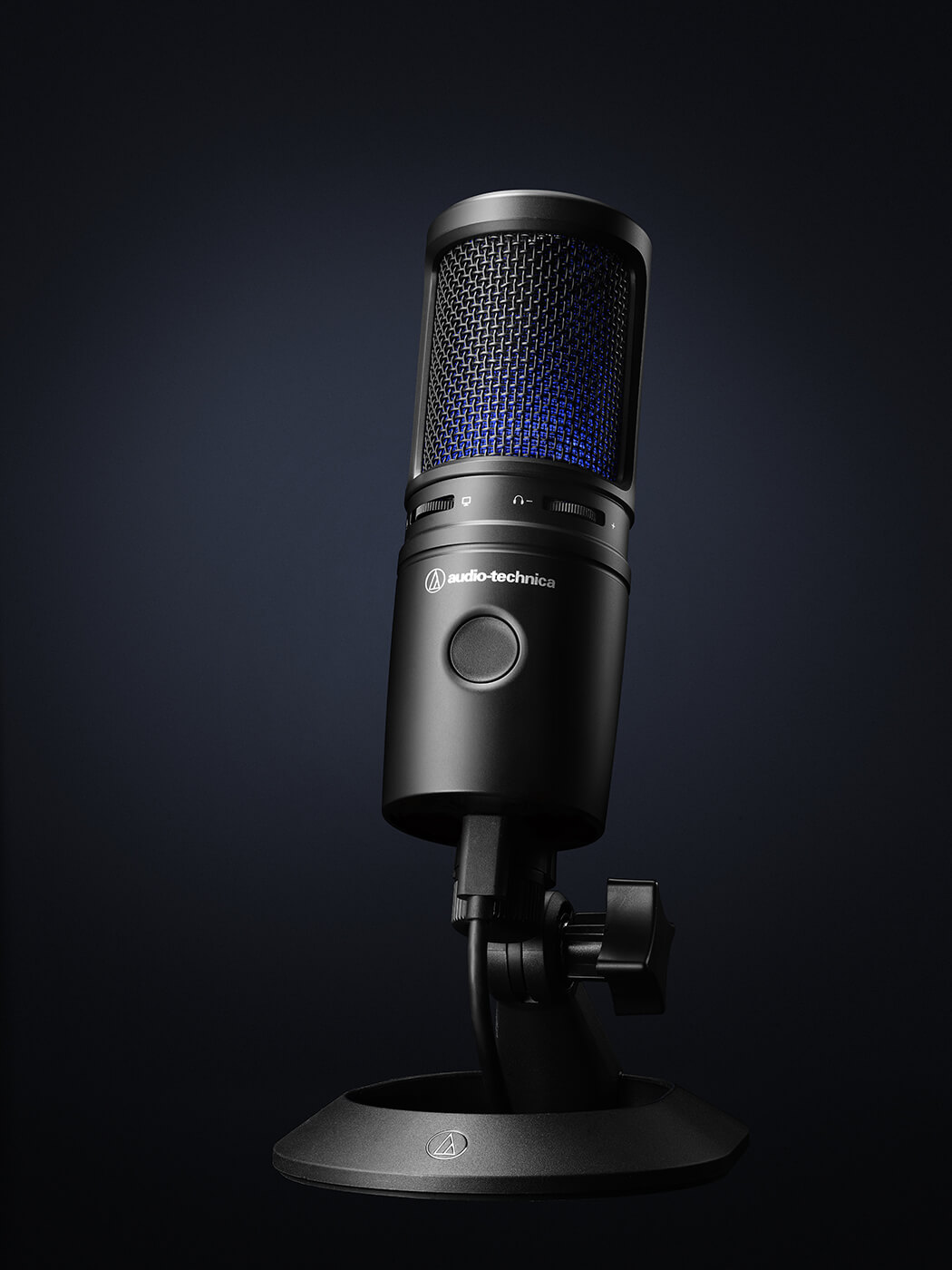 AT2020USB-X is class compliant on macOS Catalina and Windows 8.1 as a minimum and doesn’t require any drivers to run. Though it’s not mentioned in the official specs, the mic is also compatible with iOS if you have an iPad with a USB-C port. Given the number of audio and podcasting recording apps you can get for iPad, it’s reassuring that it will work on that platform, too.

An iPad with USB-C paired with the AT2020USB-X is likely the most compact podcasting studio you can get, and it’s very capable. Yes, you can get smartphone apps to do it too, but you’ll probably have less fun editing a podcast on a smaller screen.

You can monitor the mic’s input using headphones via the 3.5mm jack on the rear of the mic, and it appears as an audio in/out device on your computer. Ideally, the jack would be on the underside to make for a neater design, but it’s not a deal-breaker.

In addition to the headphone level control, there’s zero-latency monitoring and a mix dial that controls the level of computer audio you hear back along with your voice. This works well, and is handy for recording voiceover or livestreaming when you need to hear the computer’s audio but without any of it bleeding back into your microphone. Of course, if you are just recording a single voice, you can mute your computer’s speakers and not use headphones. 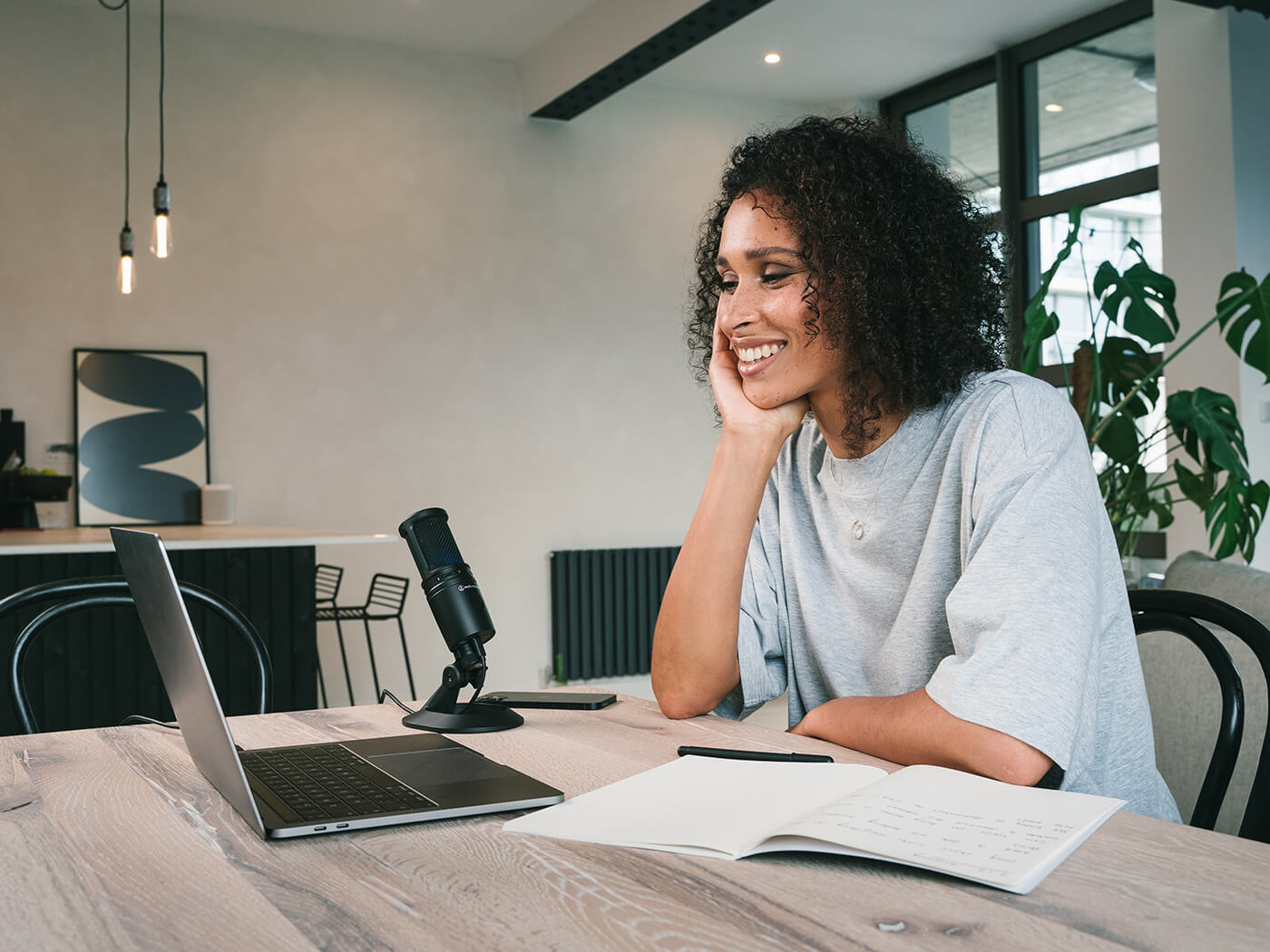 There’s a touch-sensitive, capacitive mute button on the front of the mic that’s particularly useful for streamers who don’t want their mic to be live all of the time but also don’t want to have to dive into system settings to turn it off. Just simply tap the button to mute the mic and the light on the front will turn from blue (live) to red (muted) to show you clearly that it’s off, and hopefully avoid any hot mic slipups that end up on YouTube compilations.

Internally, there’s a fixed-charge backplate permanently polarised condenser element with a cardioid polar pattern and a frequency response of 20Hz – 20kHz. In your computer’s audio settings, you can set the mic to run at a 16- or 24-bit rate and 44.1, 48, 88.2 or 96kHz sample rates. A podcaster or streamer is unlikely to need to go all the way to 96kHz but it’s a treat to have the option – especially if you decide to put the mic to work recording a guitar or a sung vocal in a DAW, for example.

As a rule, these kinds of mics, designed as they are for radio-style recording, tend not to be quite as detailed as a full studio model would be. But they are less delicate and much more convenient for the kinds of tasks for which they have been created. 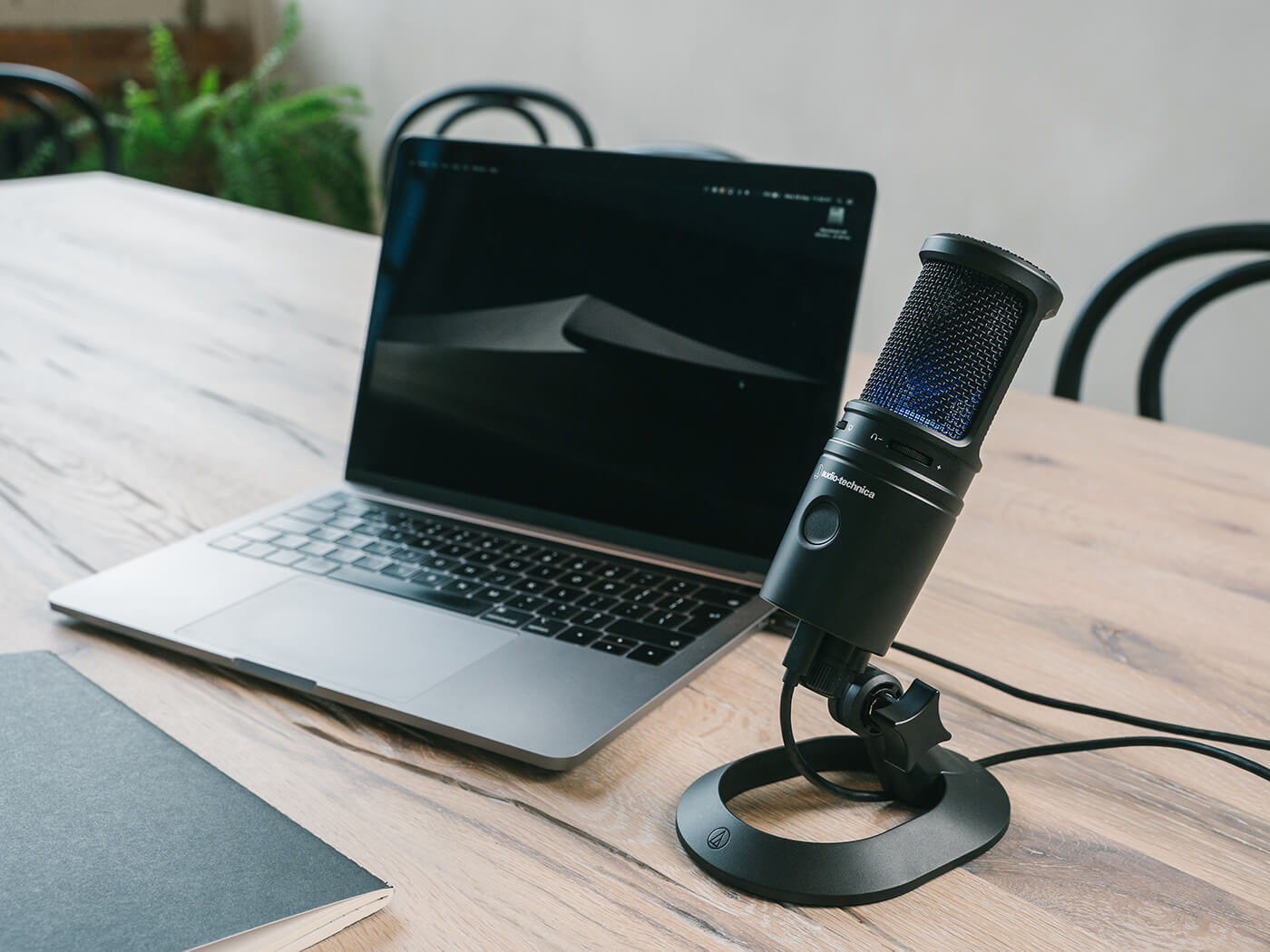 The recording quality is excellent, with the mic offering a crisp and strong signal, particularly when placed relatively close to the person speaking. Monitoring with wired headphones works superbly too, with the zero latency feature letting you hear your voice along and computer audio without any delay from the voice having to be passed through the computer first.

There’s no level indicator on the hardware, which is a shame, but you can check levels in your software. The AT2020USB-X has quite a few competitors, such as the ubiquitous Blue Yeti USB with four switchable polar patterns – but this only has single sample rate of 48KHz. Elsewhere, there’s the slightly more expensive Rode NT-USB and the JBL Quantum Stream, which we recently reviewed and costs a little less.

Ultimately, Audio-Technica’s new mic is reliable and easy-to-use, and it will definitely elevate your podcasts, streams and voice recordings with minimal fuss. In an increasingly busy market, Audio-Technica’s pedigree with mic design may well help it to stand out against the competition. 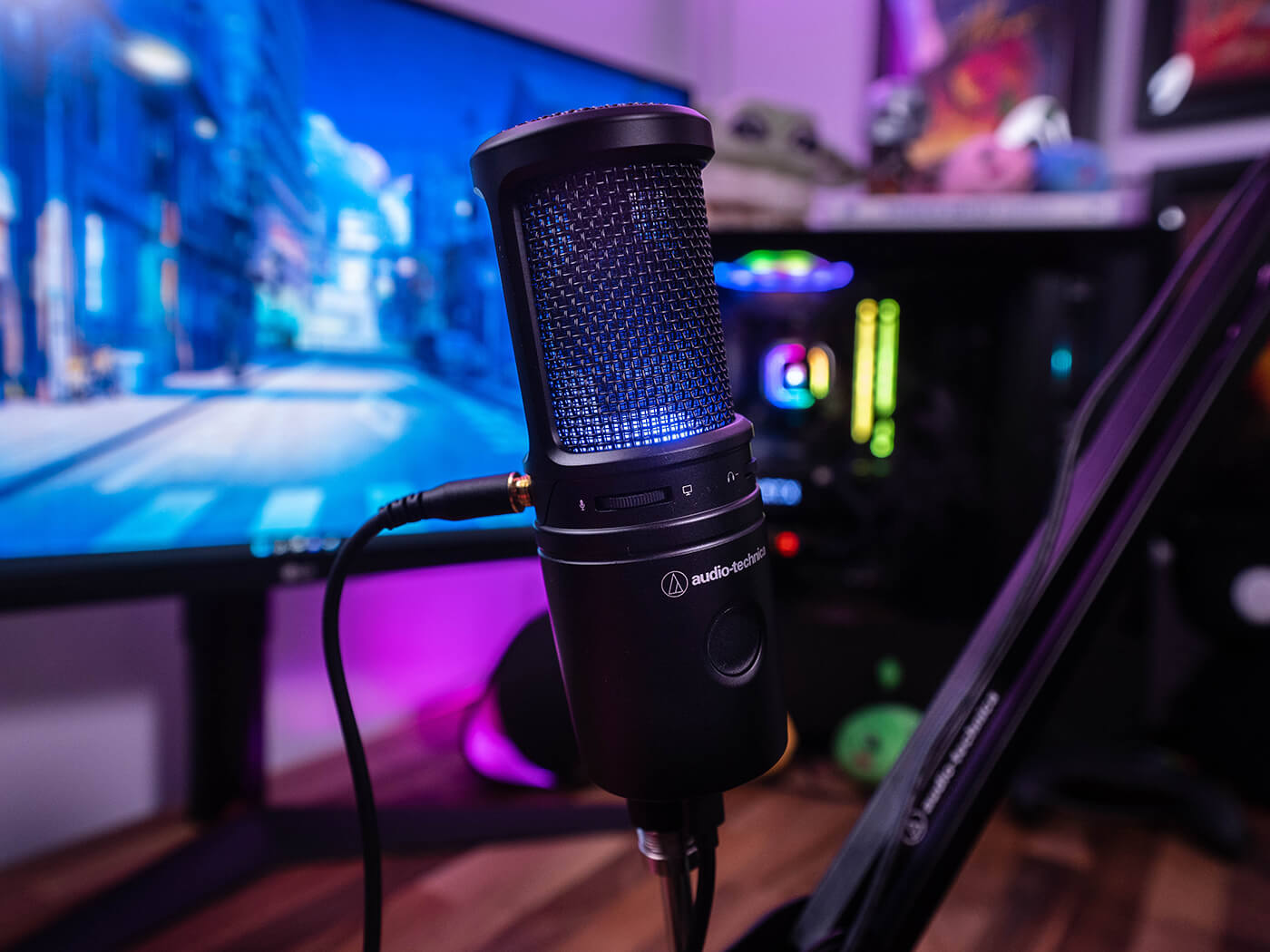