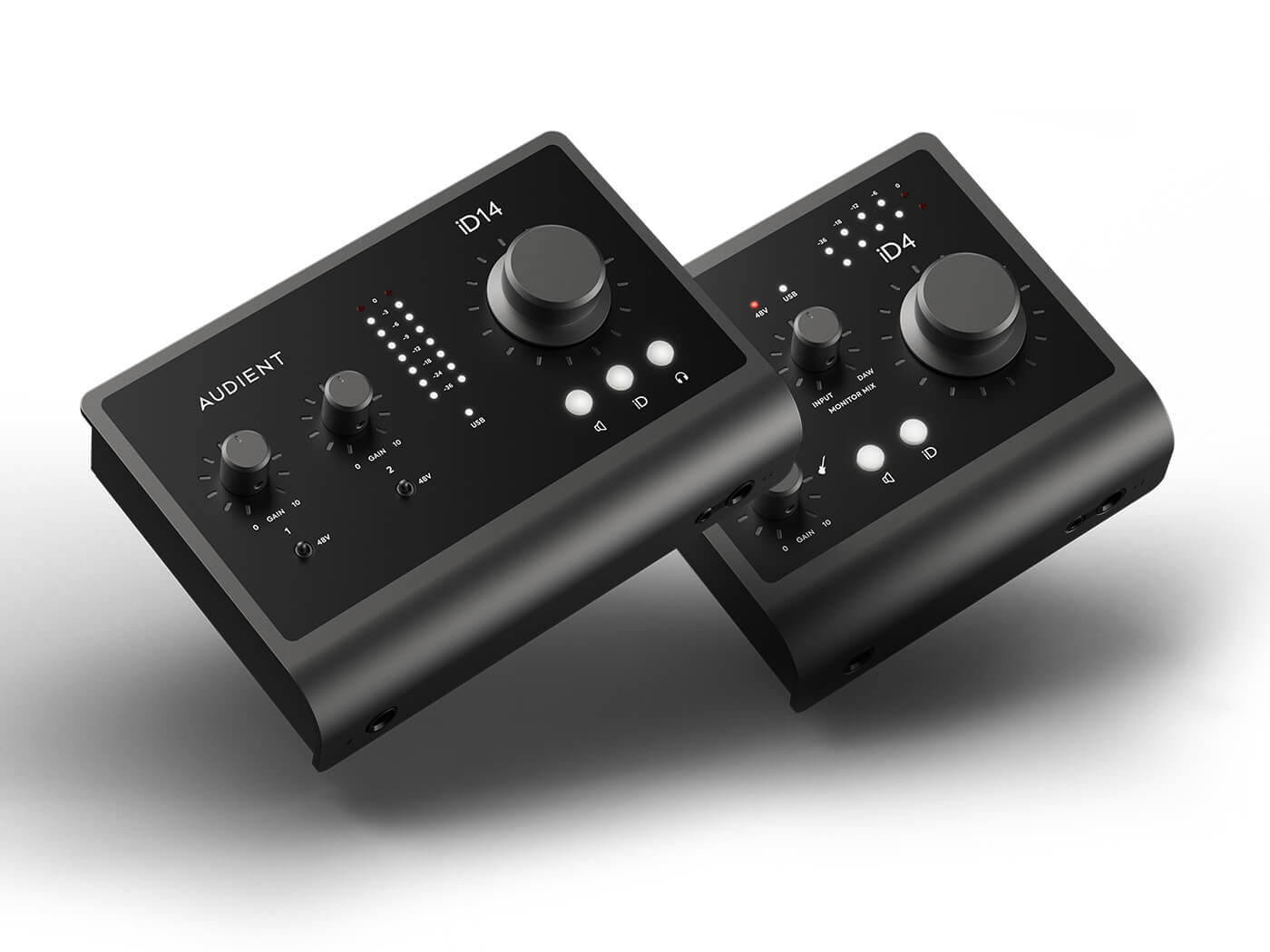 Audient‘s iD range of audio interfaces has proved a popular choice in recent years, thanks in no small part to the company’s highly regarded home-grown mic preamp. This circuit, first seen in 1997’s ASP8024 large format console, has a reputation for delivering a clean, low-distortion sound, with just a touch of musically-sympathetic colouration to add a bit of life and lustre. In recent years, that preamp has found its way into Audient’s iD range of audio interfaces, two of which, the iD4 and iD14, have just been overhauled.

These new interfaces are built into the same all-metal enclosures as their predecessors and have the same selection and layout of knobs, LEDs and buttons. Despite the similarities, this makeover has given the units a much cooler look, with a dark “space grey” metallic finish, white LEDs and button backlights, and tidier labelling.

Less visibly, the updated interfaces now use USB 3, giving a slight improvement in round-trip latency, and are connected to a host Mac, Windows or iOS device via a USB-C socket. A USB-C cable is included, but considering how cheap they are, it would have been nice to see a USB-C to USB-A adapter plug included.

While both units retain their 96kHz/24-bit maximum sample rate/bit-depth specification, Audient has squeezed a bit more dynamic range from the AD and DA converters: +7dB and +11dB respectively for the iD4, and +5dB and +9dB for the iD14. Also, where the original iD14 could only provide phantom power when connected to an external power supply, the new interfaces are fully bus-powered and deliver a true-to-specification phantom power signal (48V ±4V at 10mA per channel). Both interfaces come with Audient’s ARC collection of software, including LE versions of Cubase and Cubasis, instrument plug-ins, and even free production lessons.

The MkII update also features loopback, gives iD4 and 14 MkII users two virtual inputs. These permit you to route audio from other software programmes on your computer into your DAW, making it possible to live stream and remotely record podcasts via Zoom without additional software. 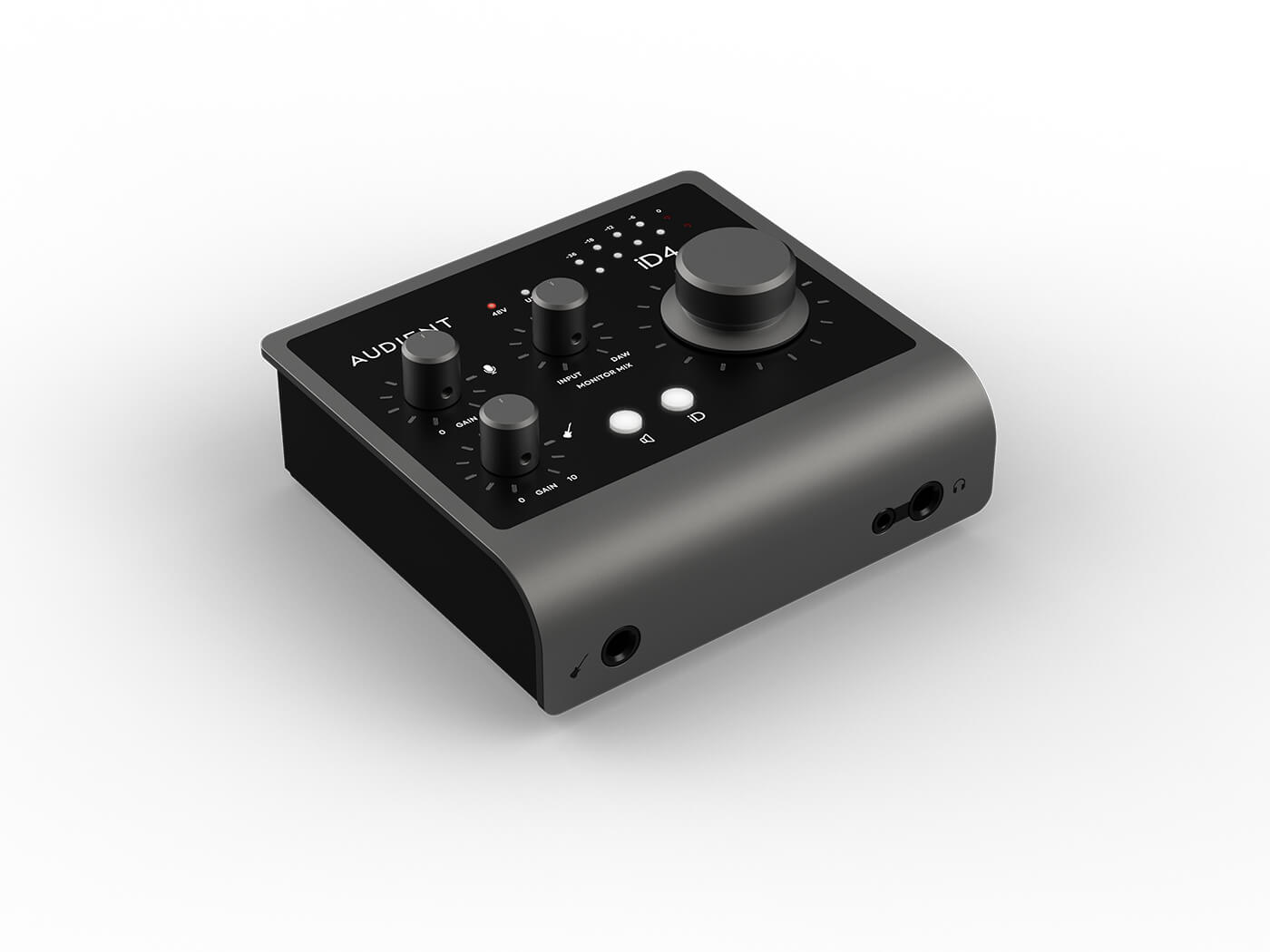 The I/O configuration of the iD4 hasn’t changed, remaining as a two-in, two-out interface. Channel 1 is for mic and line signals, with a preamp taken from Audient’s flagship ASP8024-HE console. The second channel input is on the front panel and is for instrument-level signals. The input features a class-A JFET circuit similar to what you would find inside a guitar or bass amp, which improves results when using software amp and speaker modellers. Each input channel has an independent gain knob, and there’s also a knob for setting the balance between the direct input monitor signal and the main mix signal coming back from your computer.

The iD4’s two output channels are sent to both the rear panel output jacks and the built-in headphone amp that drives the 6.35mm and 3.5mm headphone sockets on the front panel. A pleasingly chunky rotary encoder controls the output level, with the current level indicated on the 5-part LED meters that arc over the top of it (these act as level meters when you aren’t interacting with the knob). Pressing the encoder dims the output by 15dB, and you can disable the main outputs – but not the headphone output – using the dedicated mute button. 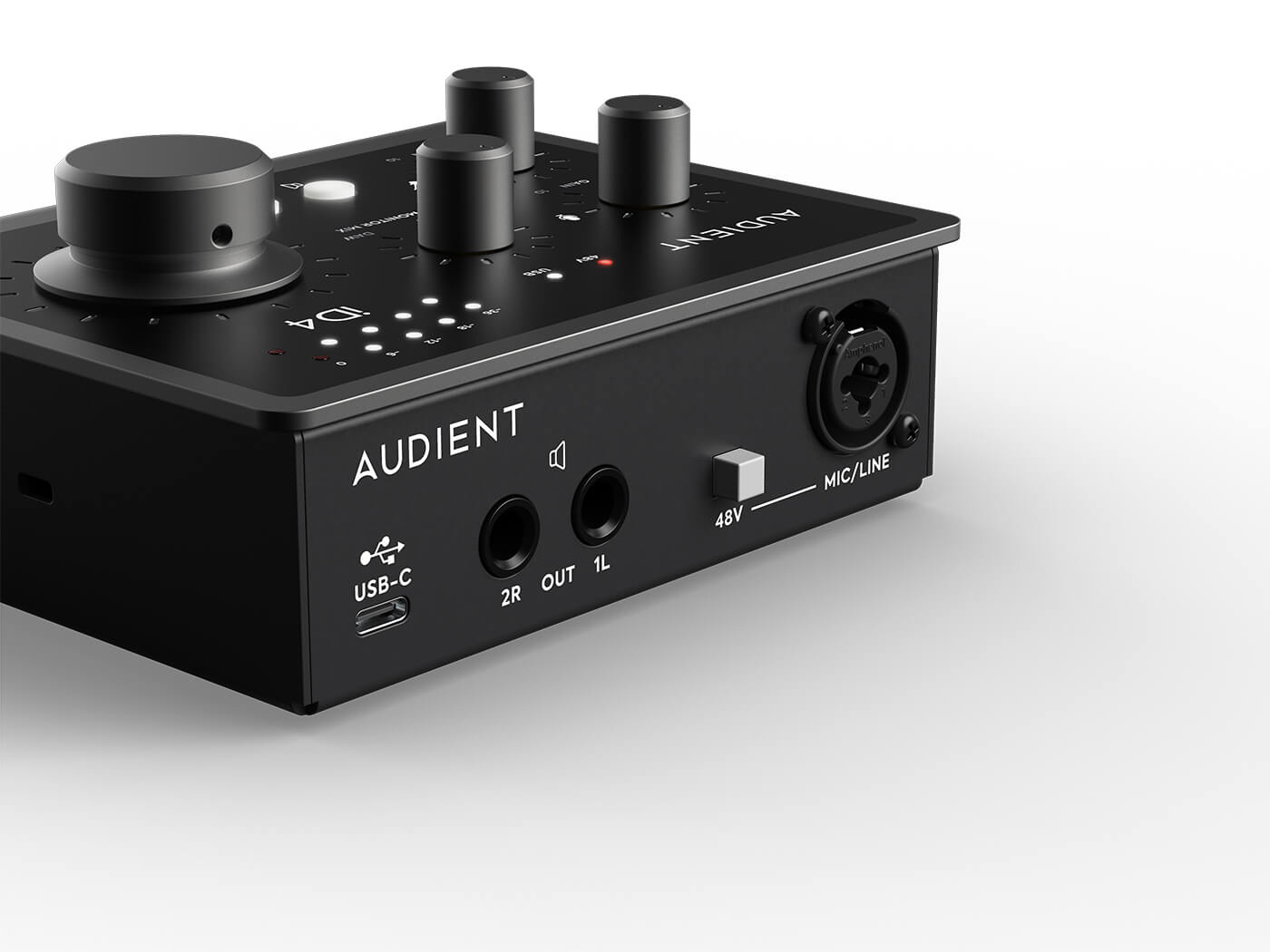 Next to this is a button labelled ‘iD” that enables Audient’s clever “ScrollControl” mode. In this configuration, the rotary encoder sends mouse scroll-wheel messages, so when you hold your mouse pointer over an on-screen control, you can use the rotary encoder to dial in a value. With the interface positioned so that your non-mouse hand can rest on the encoder, this works really well, letting you adjust software parameters in a natural, tactile way. Better still, it just works, with no fiddly setup or MIDI learn shenanigans. 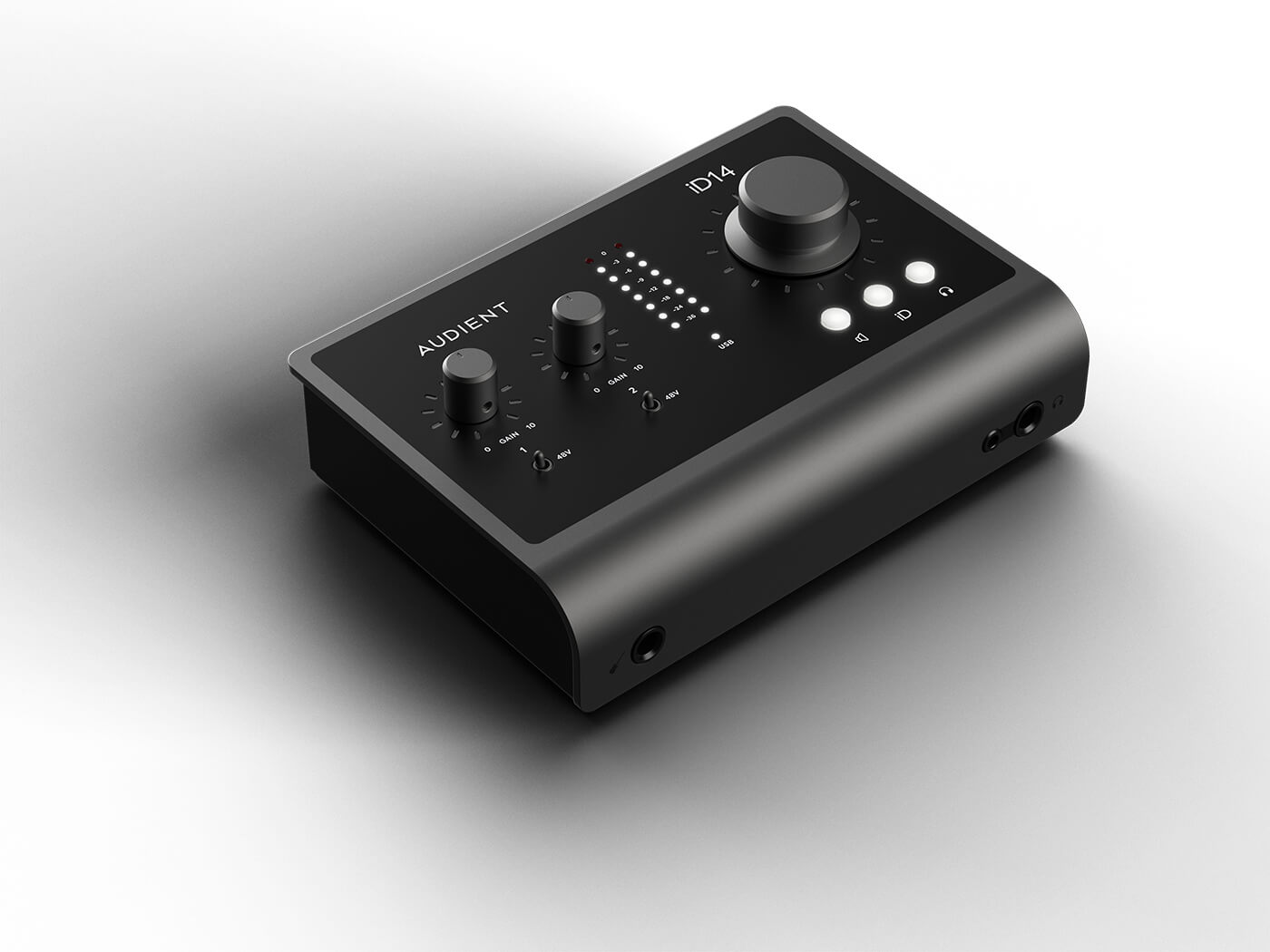 With a maximum of ten input channels, the iD14 provides much more input flexibility than its smaller sibling. The first two inputs are mic/line affairs, again featuring Audient preamps, and with individual toggle switches for switching phantom power on and off. A slight gripe here is that the switch positions are the only visual indication that phantom power is enabled; a red LED, as used on the iD4, would be more conventional and harder to overlook.

iD14’s front-panel instrument input defeats channel 1’s rear panel mic/line input and features the same guitar-friendly class-A JFET input as found on the iD4. You can access the remaining eight input channels via an optical digital input. This can run in stereo S/PDIF or multi-channel ADAT modes, so you will need additional hardware to use them. The digital input can run at up to 96kHz, but of course, the ADAT channel count is halved to four if you run at above 48kHz. 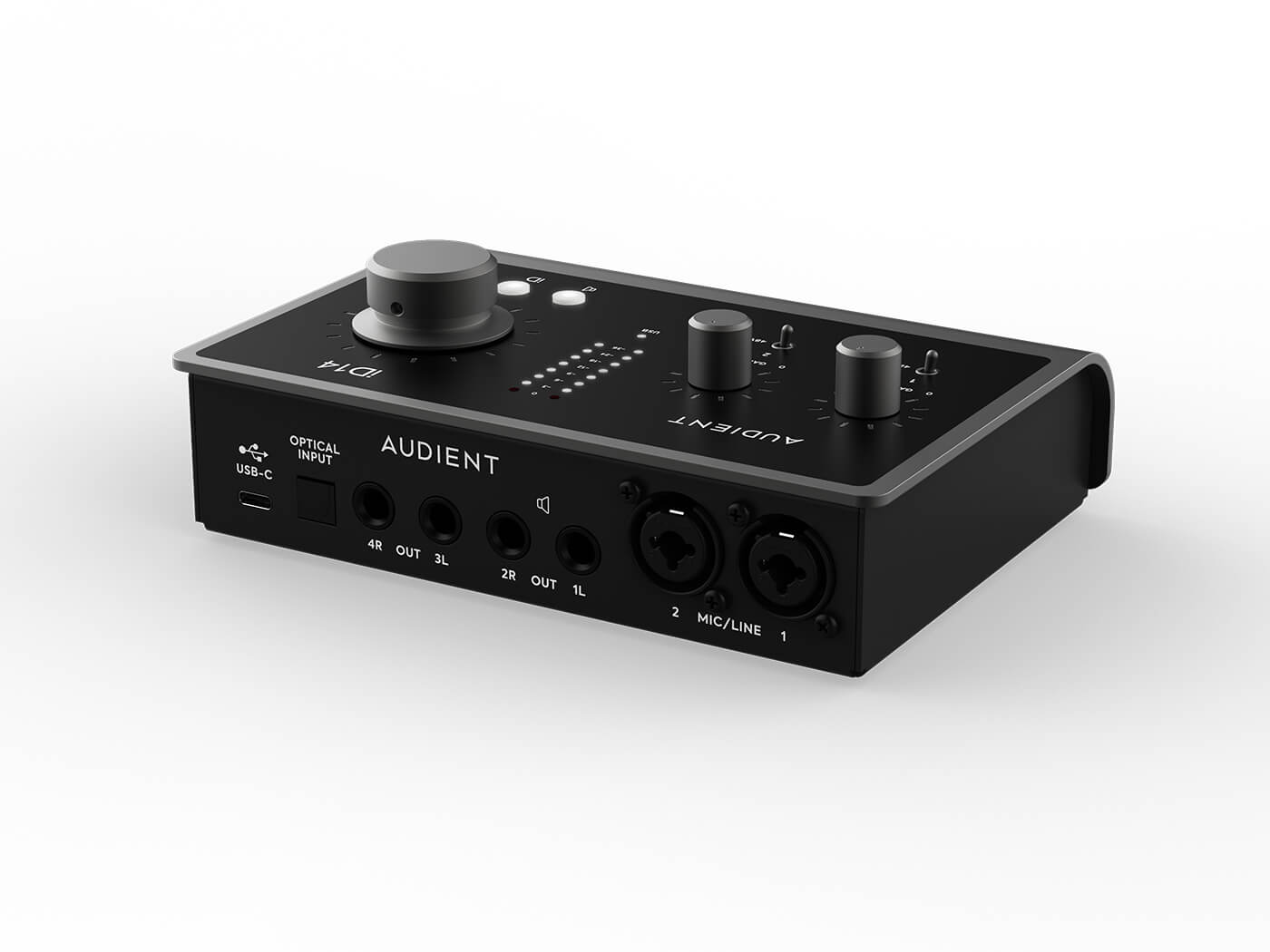 The iD14 has gained an extra pair of output channels, taking it to a total of six. Four of these are delivered via pairs of jack sockets on the rear panel, with the last two driving the built-in headphone amp. What you send to these outputs depends on how you configure the iD Mixer app. The app has three views – Master, Cue A and Cue B, to set up different mixes for various uses and route them to the desired output channels. Here too, you can assign one of iD14’s inputs as a talkback mic source, or you can use any other source available on your computer, including its built-in microphone (if it has one).

Audient’s clever ScrollControl is available on the iD14 too. If you don’t wish to use it, you can assign another function to the iD button, such as toggling talkback or switching to alternative monitors. 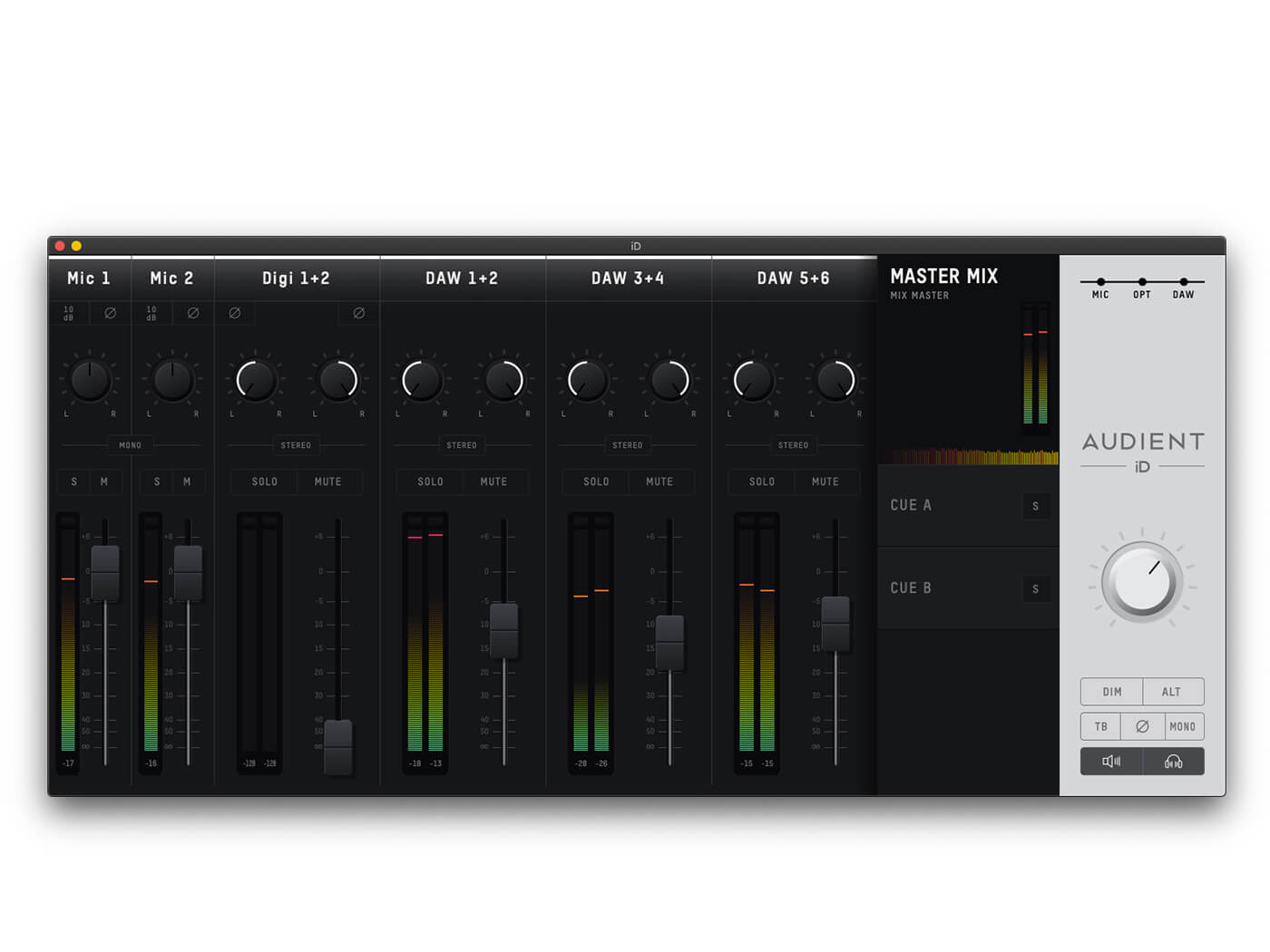 The iD4 is a fantastic solution for guitarists. Its input configuration is well suited to mic’ing a guitar amp or acoustic guitar while simultaneously recording the instrument’s DI feed for later re-amping. But it isn’t such a good fit for those who work with stereo signals because there’s no line-level input to the device’s second channel.

The iD14 resolves this problem, but the need for additional hardware to fully unlock the input capabilities may be off-putting to some. Nevertheless, both units are great little performers, look good, and benefit from console-quality preamps and Audient’s unique ScrollControl feature. Plus, once you register your hardware, you get access to Audient’s ARC collection of software, which will get you started in next to no time. Be sure to check them out.