It’s been branded the ‘ultimate desktop interface’ but is this AudioFuse follow-up a dud or will it set our studio workflow alight? 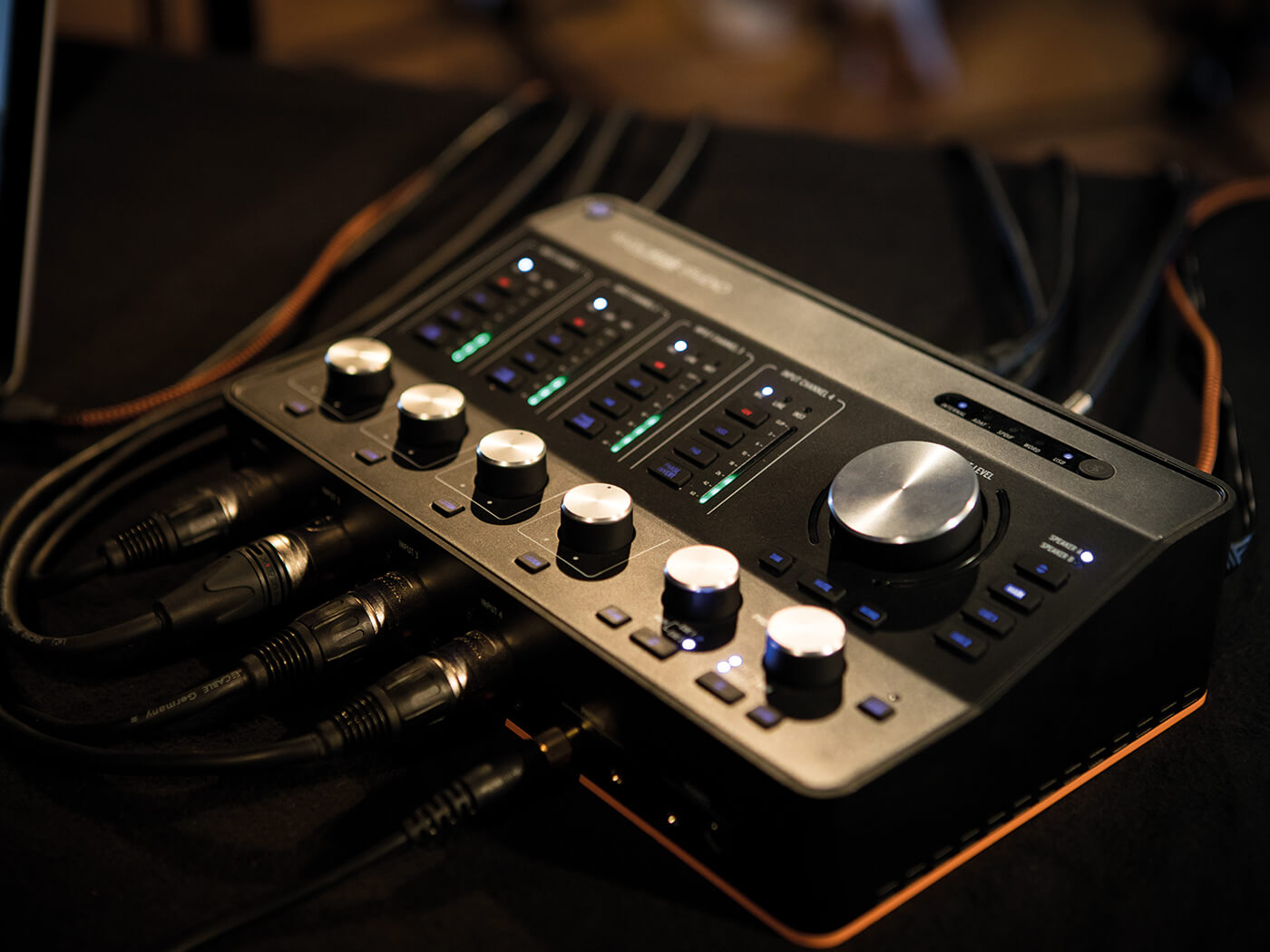 The fingers of French firm Arturia have long been buried in the software-synthesis tarte. In recent years, however, its remit has expanded. The Grenoble-based firm’s move into hardware came in 2012, with the release of the MiniBrute analogue synth. Its Brute range has broadened since – the awesome MatrixBrute is one of the company’s standout products – and Arturia has also produced a series of keyboard and pad controllers. More recently, however, its attention has been fixed on the corner of the market reserved for audio interfaces.

Arturia unveiled the diminutive AudioFuse in 2017. Three years later, it’s been joined by the larger and more feature-packed AudioFuse Studio and AudioFuse 8Pre. We reviewed the latter, a rackmount unit that can act as either an audio interface or an ADAT converter/breakout box, in January, and found it to be a fantastic addition to the Arturia range. It’s the former, however, that we’re concerned with here.

This is a desktop unit with more than a few nifty features, and hands-on input and monitor controls. Many audio products come enveloped in sumptuously designed packaging with the intention of creating a strong first impression, and AudioFuse is no different. After digging past its natty packaging, we find a satisfyingly chunky unit finished in black, with brushed aluminium dials and a striking orange trim running around the bottom edge. It’s a good look. 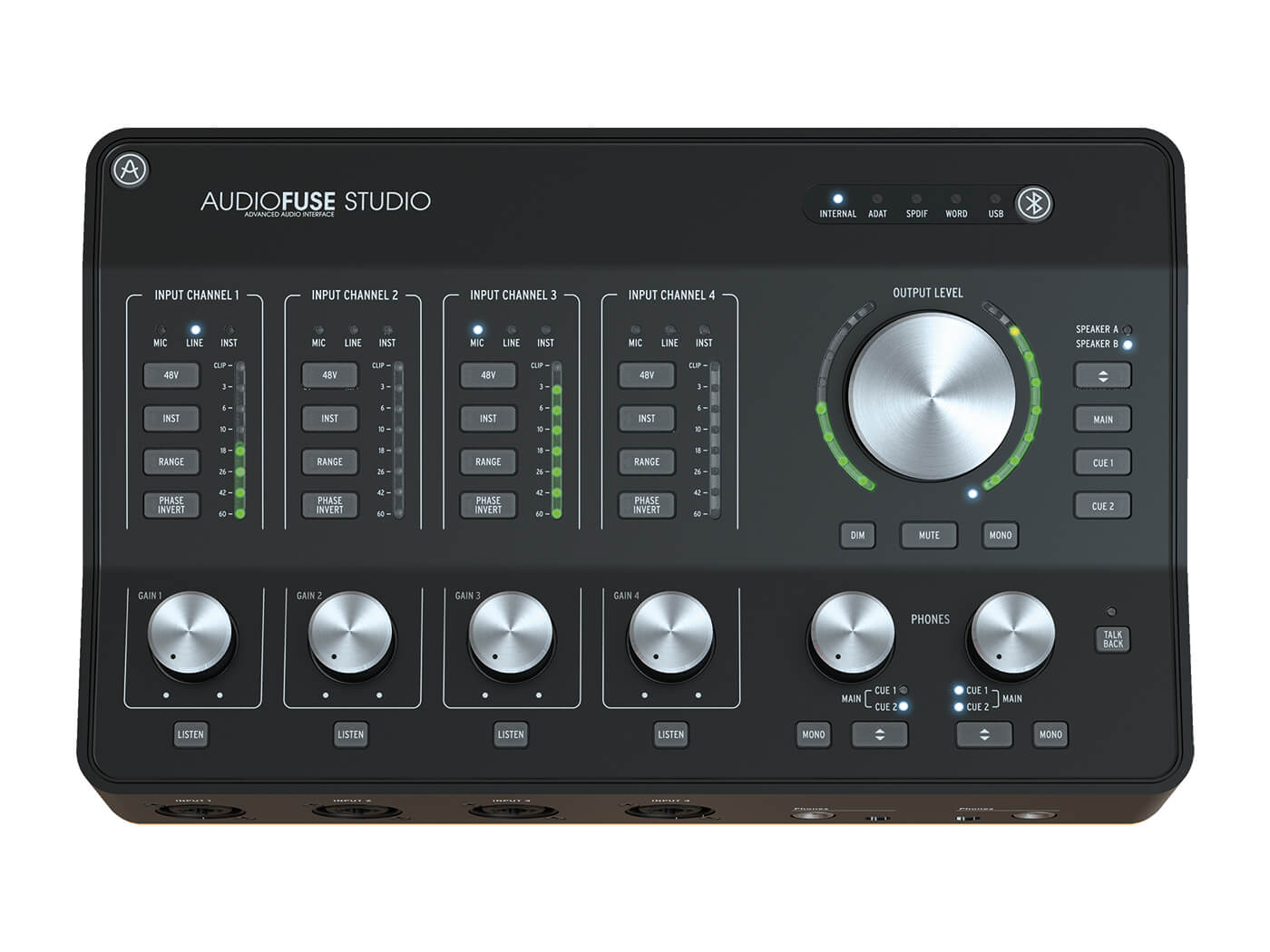 It’s bulky but AudioFuse Studio isn’t exactly large, and offers a surprising amount of connectivity for an interface of this size. There are eight analogue inputs in total: four XLR/jack hybrid sockets on the front and four jack sockets on the rear. The front inputs can take mic, line or instrument-level signals, and feature Arturia’s bespoke DiscretePRO preamps.

Based on the preamps found in classic analogue mixing consoles, and using discrete components rather than ICs, these deliver impressively low noise characteristics that allow for a respectable 119dB of dynamic range, and give a clean, crisp and uncoloured sound. What’s really unusual – and extremely welcome – is that the first four inputs have insert points following the preamp, meaning you can easily patch in some input conditioning before the signal hits the A/D converters.

The remaining four inputs can be driven from the jack connectors on the rear of the unit but also have a few other sources available. Inputs five and six are doubled on a pair of RCA/phono connectors that can be switched to handle either a regular RCA line signal or a phono signal from a record deck, which is ideal for sampling from vinyl. Even more impressive is the fact that inputs seven and eight can be switched to receive their signal from the built-in Bluetooth receiver, which is sensationally helpful if you’re working with any synths on your tablet and want to play them live into a recording.

For analogue outputs, AudioFuse Studio provides two pairs of monitor-outs, switchable from the unit’s top panel, a pair of auxiliary outputs, and two pairs of headphone outputs, each with its own output bus, and each offering both standard and mini-jack connectors. You can use the auxiliary outputs as additional line outputs to feed an external effects processor, for example, but what’s really remarkable here is that they can also be configured to operate as re-amping outputs to connect to guitar or bass amplifiers, or as CV outputs for controlling analogue synths when coupled with a suitable plug-in, such as CV Tools in Ableton Live.

For digital I/O, AudioFuse Studio has two pairs of optical connectors and a pair of coaxials. These can be configured in various ways to give a maximum of 10 additional I/O channels: eight ADAT and two S/PDIF at up to a 96kHz sample rate. The coaxial I/O can also be switched to operate as WordClock I/O, allowing you to sync the interface with an external digital clock.

MIDI I/O is provided via a pair of mini-jack sockets, with mini-jack plug to DIN socket adapter cables included in the package. The interface’s I/O also features a three-port USB hub, so you can easily hook it up to a master keyboard, licence dongles and memory sticks. 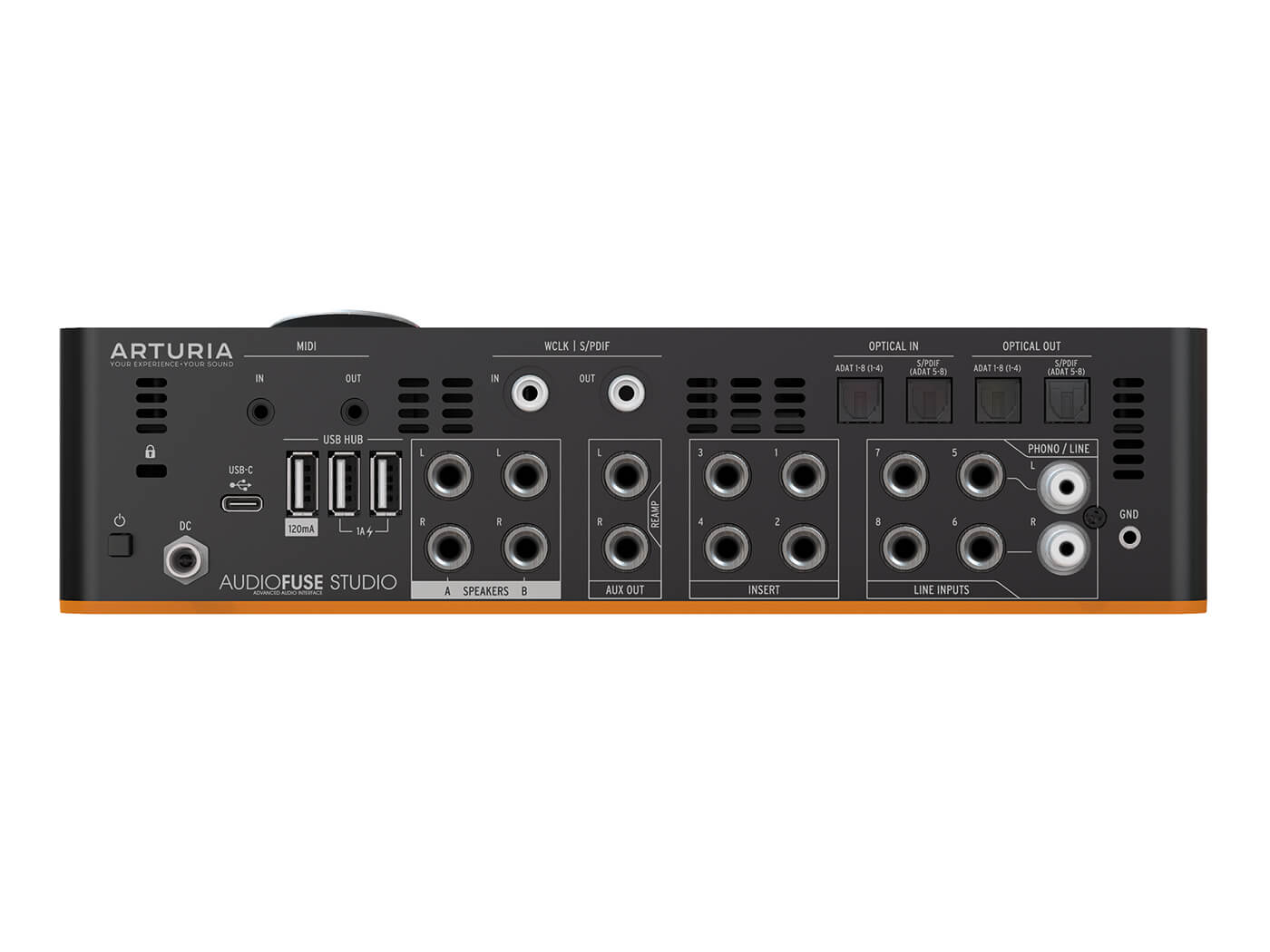 AudioFuse connects to the host device via USB-2, although does so through a USB-C connector (both USB-C to USB-C and USB-C to USB-A cables are included in the box). It’s also class compliant, so it will work with any device and operating system that supports the standard, including iOS, Android and many varieties of Linux.

For the best experience, though, you need to use the interface in conjunction with its AudioFuse Control Centre software (AFCC), available for Windows and macOS. This provides mixing, monitoring and routing controls for the hardware, and is also where you configure things like the re-amping and CV features. The hardware remembers its last used settings when disconnected from the host computer too, so that AudioFuse can be used as a standalone unit if need be.

In addition to the AFCC software, the interface also comes bundled with the AudioFuse Creative Suite, a collection of plug-ins that features a trio of channel strips modelled on classic mixing desks, a Urei 1176-style compressor, a tape delay inspired by the Roland Space Echo, and an EMT 140-style plate reverb. Drawing from Arturia’s synth expertise, there’s also a ladder filter modelled on the iconic Moog design, and Analog Lab Lite, an instrument that contains presets taken from Arturia’s extensive collection of synths. 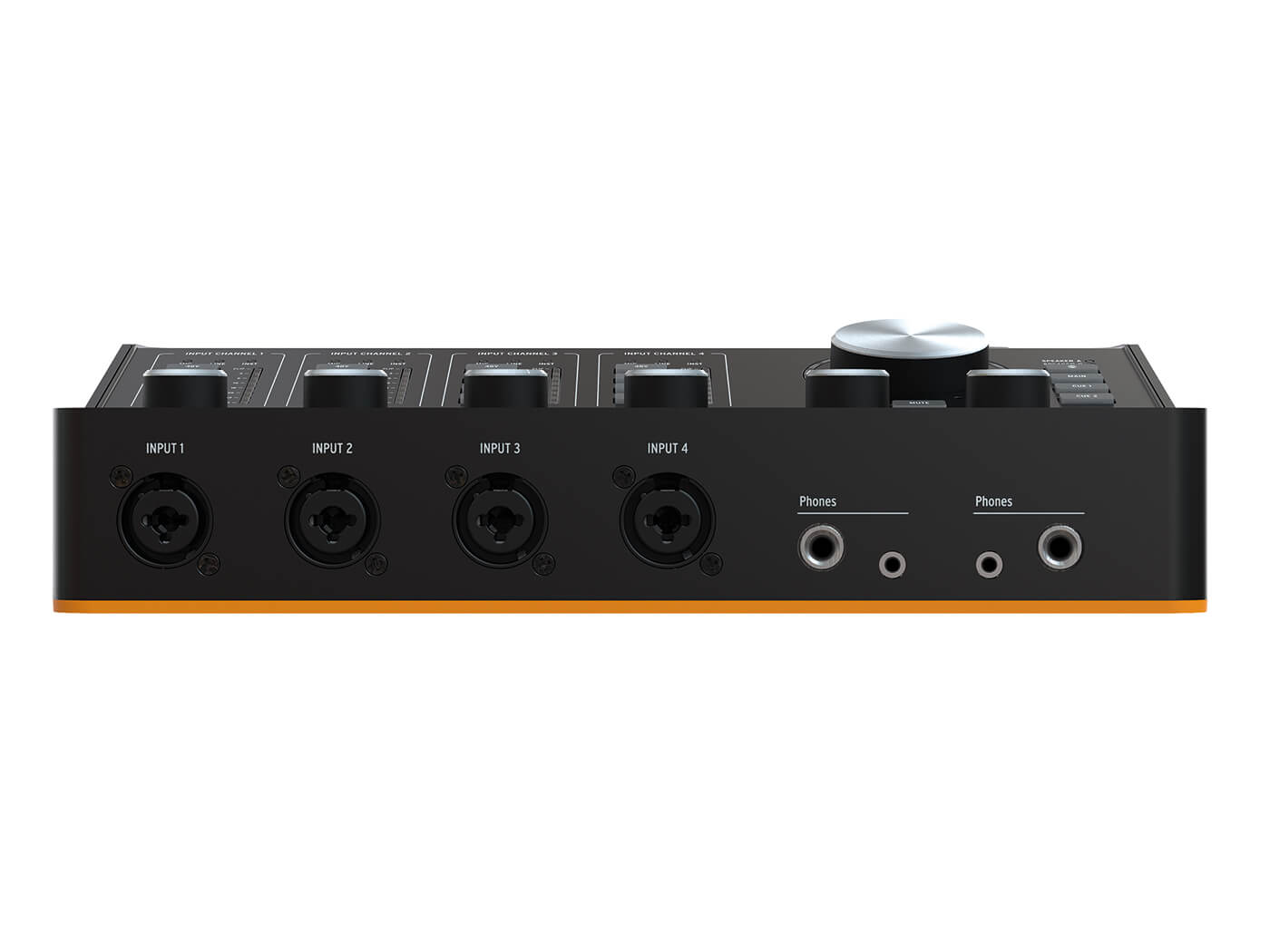 Arturia has put together a compelling package with AudioFuse Studio. It looks superb, feels solid, and its top panel provides just the right amount of hands-on control over input signals and monitor settings, as well as useful feedback on the signal levels they’re handling. In use, the only criticism I can level at the AudioFuse – and it’s a minor criticism – is that in pure playback tests where it was pitted against a similarly-priced UA Apollo X Twin, the AudioFuse’s sound had ever-so slightly less spatial and dynamic definition. It’s a subtle but noticeable difference, but it’s not to say the interface doesn’t sound good – it does!.

We love that there are analogue insert points on the first four input channels though, and the ability to use the auxiliary-outs as re-amping outputs is an inspired feature, sure to spare users the faff and expense that comes with using DI and reverse-DI boxes. Add in the extensive I/O and many other clever features, and it’s clear the AudioFuse Studio is a well-executed and tremendous follow-up to its predecessor. Tres bien! 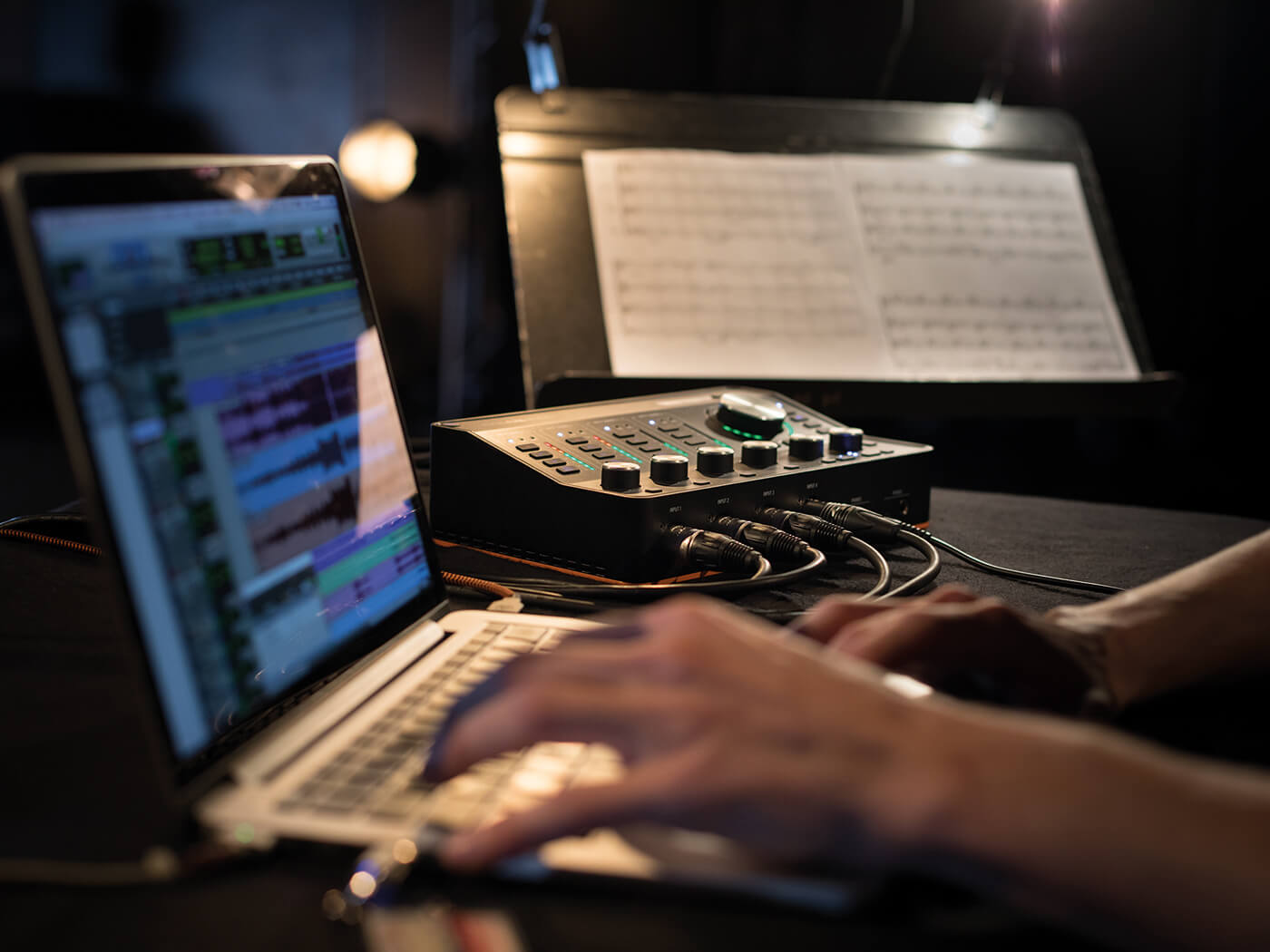 With AudioFuse Studio, Arturia has thought hard about the process of making music with real musicians and collaborators, building in the cue-mix busses, talkback channel, and flexible monitor controls that would normally be found on a full mixing console. The ‘Studio’ part of the name is apt but it’s AudioFuse Studio’s I/O configuration that impresses most, and not just because of the number of channels available – analogue insert points are practically unheard of on audio interfaces despite how much sense they make, and now they’re here.

Throw in the built-in re-amping capabilities and the ability to send CV signals to analogue synths and hook up turntables and Bluetooth devices – all with no need for additional boxes or gadgets – and you’re looking at an extremely versatile interface. 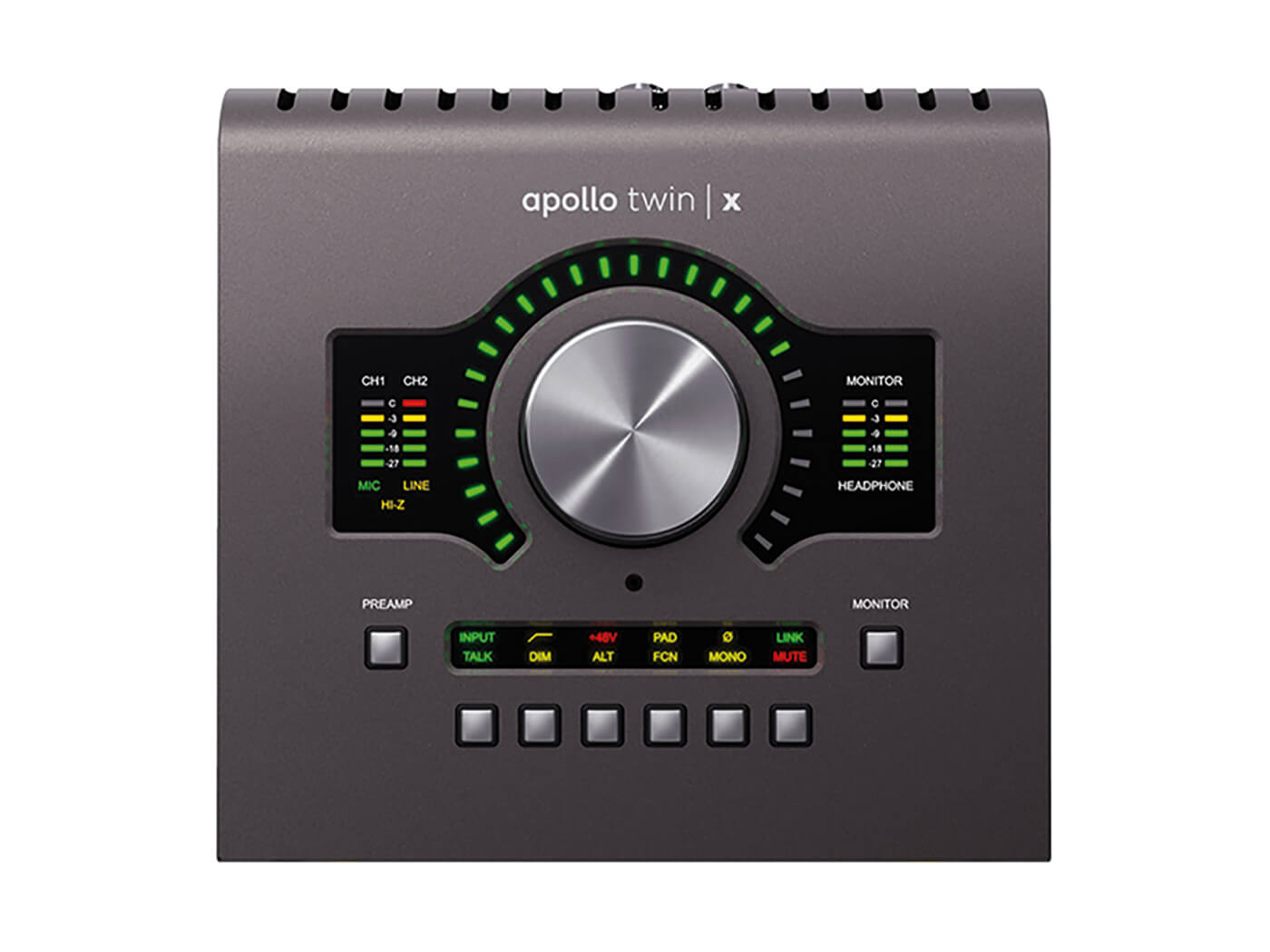 Though it lacks the extensive and versatile audio I/O of AudioFuse Studio, Universal Audio’s entry-level Apollo interface makes up for it with its onboard DSP processing, access to UA’s top-notch UAD-2 plug-in library, Unity preamps, and UA’s exceptional converter technology. 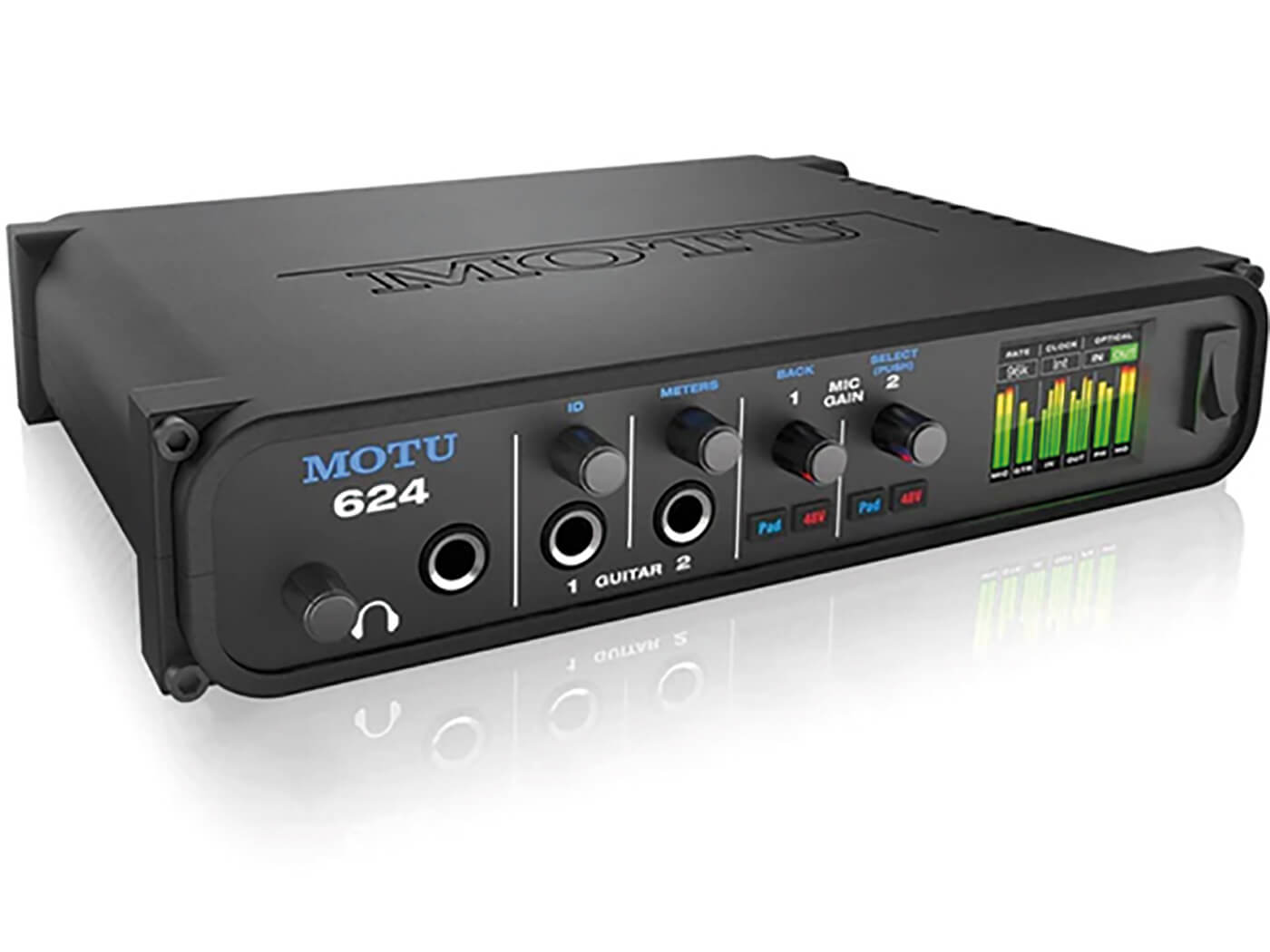 The 624 audio interface connects to the host via Thunderbolt or USB-3, and provides eight channels of analogue I/O, along with an additional eight channels of digital I/O via its ADAT optical port. You can also control the hardware’s mixer remotely from a tablet or phone.