Apogee Boom review: Pristine playback from this audio interface – but it has limitations

This stylish compact interface with DSP has an affordable price tag, but how good is its audio? 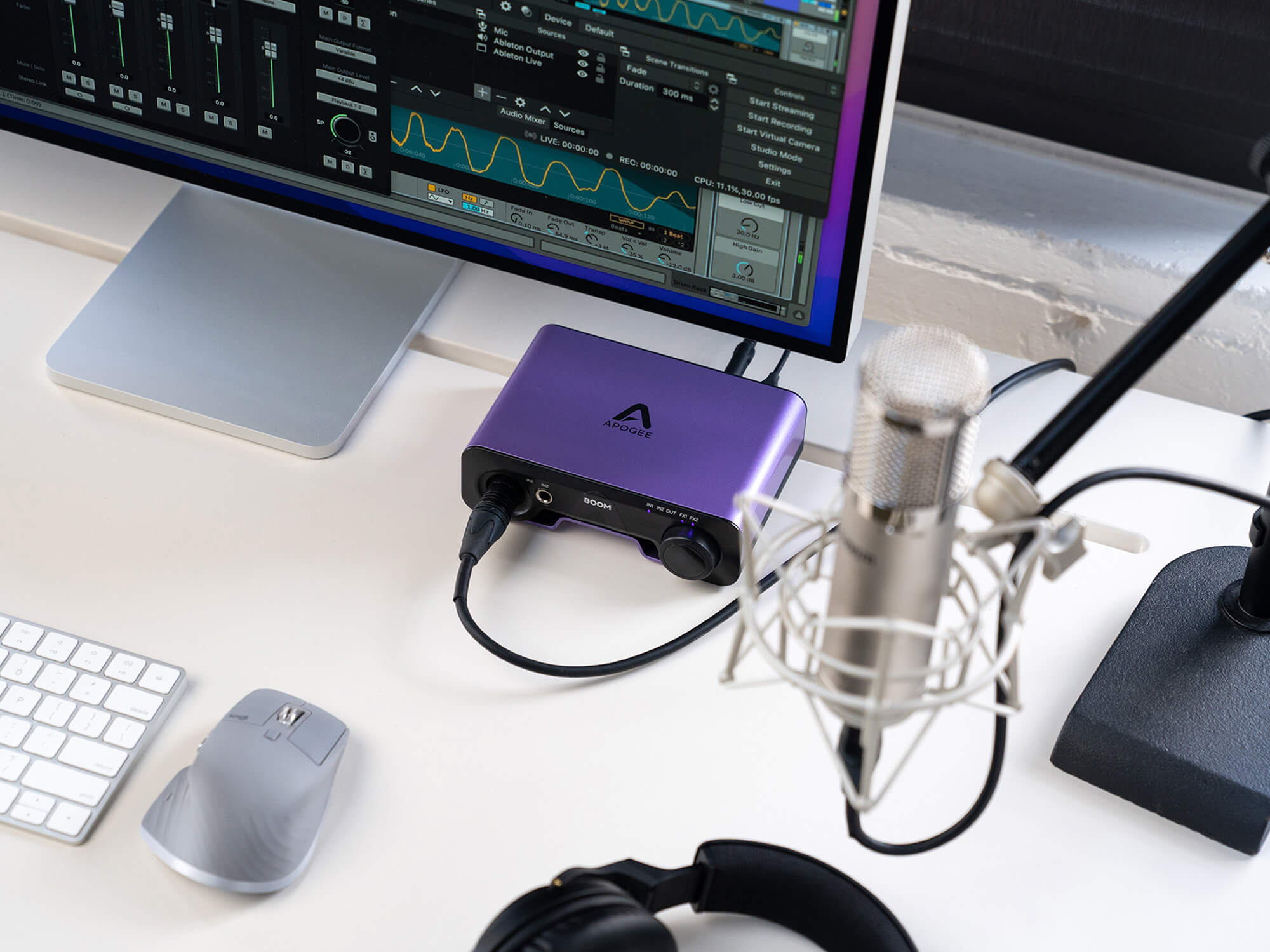 Famed for its high-end conversion offerings, Apogee has launched this cute entry-level unit to sit below its Duet 3 and Symphony Desktop products. It boasts similar headline features to the discontinued One interface, but the Boom offers a more ergonomic form factor than its predecessor, as well as dedicated, balanced monitor outputs.

However, in a bizarre turn of events, plugging in headphones mutes the speaker outs, which is likely to lead to fiddly re-plugging and maybe even a defective headphone socket for those regularly making the switch. 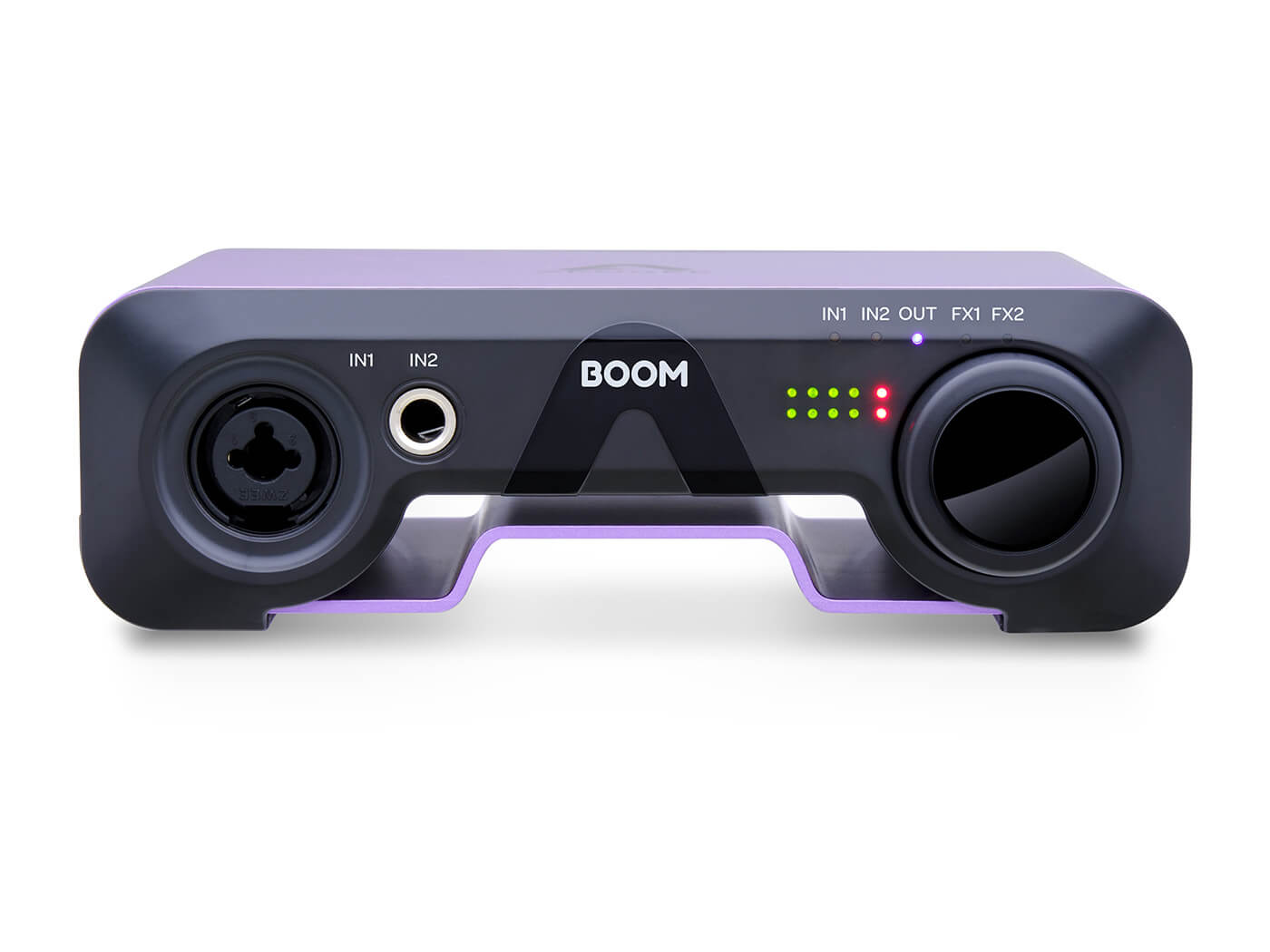 For musicians and podcasters

The Boom is aimed towards musicians armed with a microphone and a single instrument, but can also tackle podcasting and streaming. In addition to its loopback capability, the DSP on inputs (via the Symphony ECS channel strip) shifts input signals closer to the finished sound with a combination of EQ, compression and saturation. But unlike rivals such as the less expensive PreSonus Revelator io24, this processing is always printed to the recording when enabled and can’t function purely as a foldback effect.

Access to the same ECS effects in native plugin form is a paid extra, albeit with a 50 per cent discount. When handy extras usually steer users to other products, Apogee’s meagre approach is unfortunate.

The Boom looks appealing, with its striking purple finish and quirky desktop form. It’s ideally shaped to tuck away beneath the overhang of a computer monitor too. Its physical controls are minimal, with a rotary control taking care of levels and mode switching for the welcome LED metering. Control 2 software grants access to additional settings and routing, including digital preamp gain, a sensitivity pad/polarity, as well as handy monitoring features such as mono sum and dim.

Apogee promises an extremely high dynamic range, plus compatibility with a wide range of headphones via an almost zero-ohm headphone amp. Sonically, both the D/A conversion and headphone amp are indeed superb, with lots of articulation on snare transients, tight basslines and plenty of level to boot. For those mainly wishing for reference-quality playback on the go, the Boom has you covered.

With a microphone plugged in and DSP engaged, the ECS strip yields pleasing analogue-sounding EQ contours, with high-frequency boosts that can be leaned into without becoming harsh. Modelled saturation also peps up the incoming signal with harmonic character, while the compressor works well to further tame peaks, rendering spoken and sung parts more up-front and intimate. 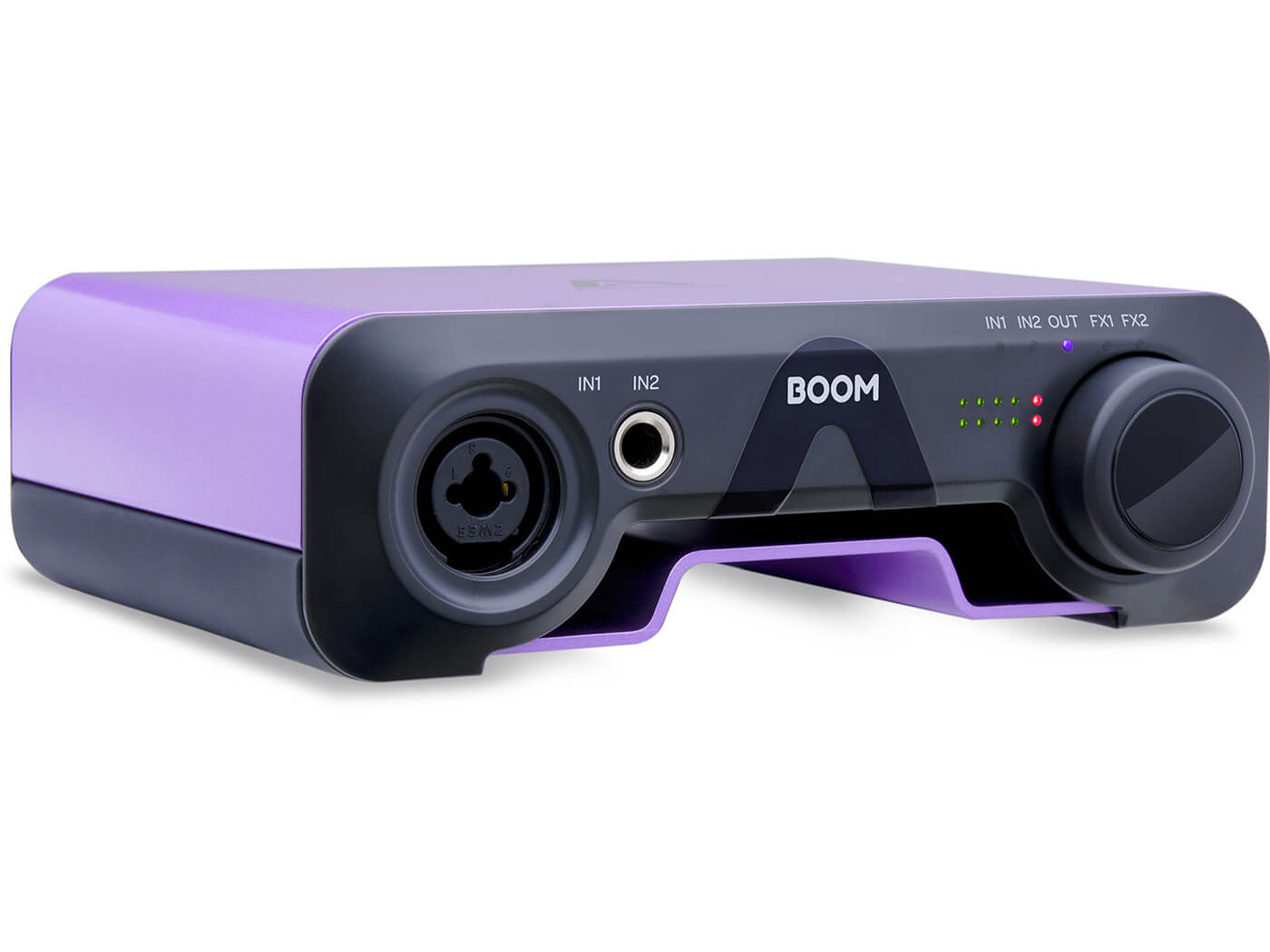 Working with gain-hungry microphones such as our Shure SM7B, things get hissy when boosting input gain past two-thirds, an issue confounded by the use of ECS processors that add further gain and/or high frequencies. A noise gate would be a welcome addition to the channel strip. Those more wary of noise might want to rethink this purchase. 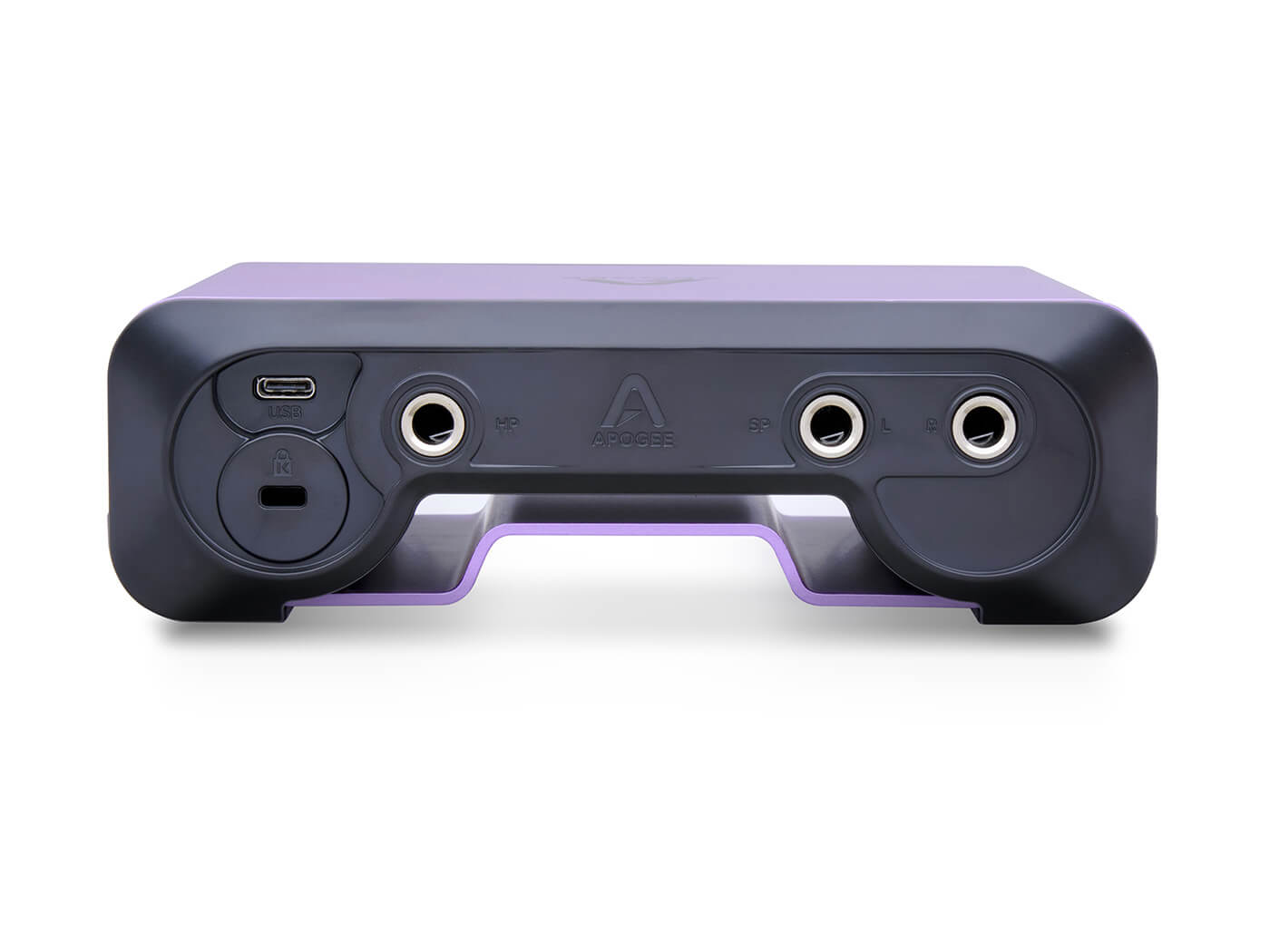 The Apogee Boom is a perplexing mix of first-rate and not-so-great. Those working on headphones with a reasonably sensitive microphone will surely be won over by its playback quality, ease of use, reliable control software and sonically pleasing DSP. On the other hand, those who favour dynamic microphones – or want to freely switch between headphones and studio monitors in a studio session – may find that the Boom falls short. 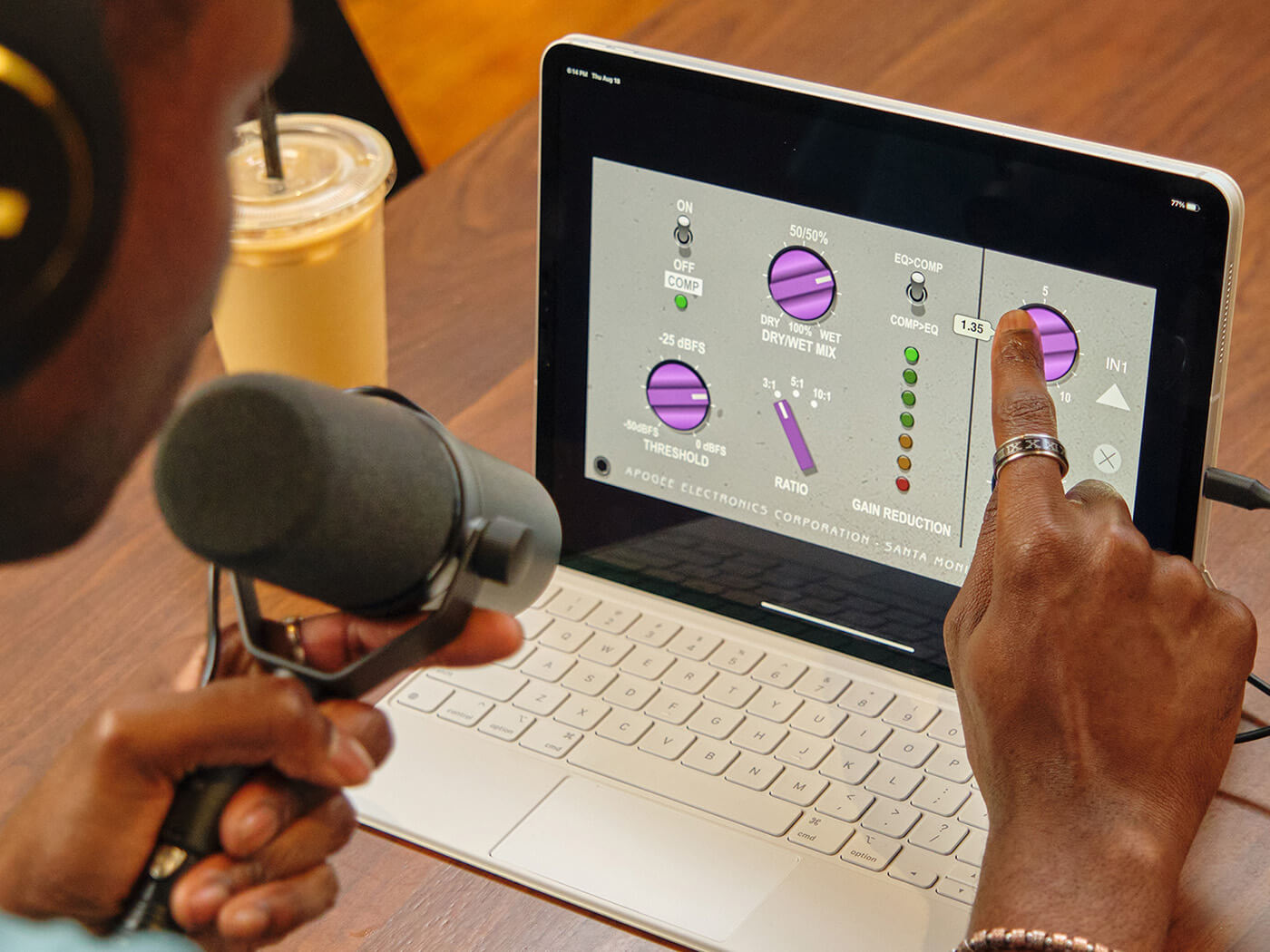