Antelope Audio Zen Go Synergy Core review: All you need in a box and more 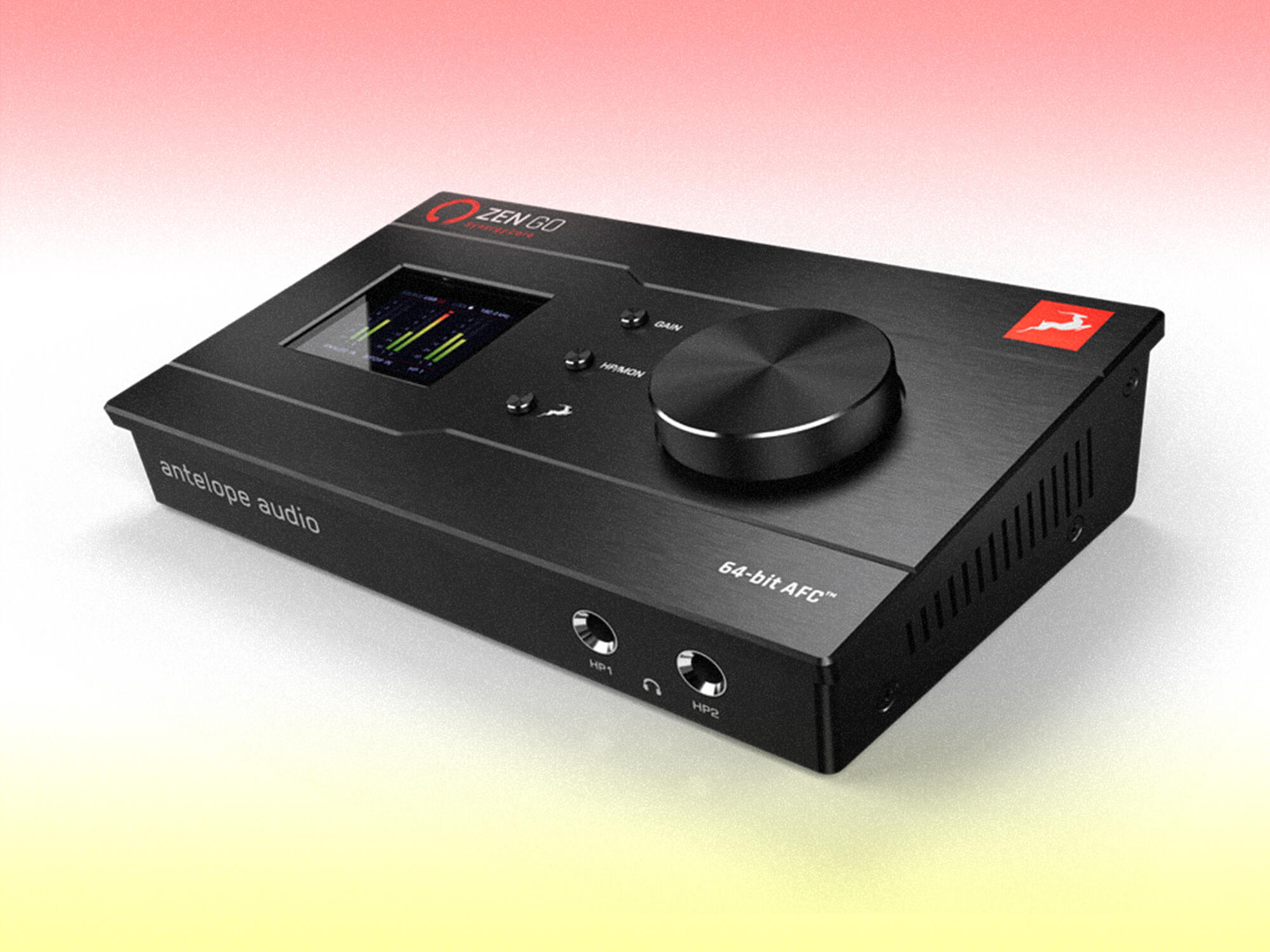 ⊖ Digital I/O is wired not optical, if you require the latter
⊖ No MIDI I/O

The smallest of the Antelopes brings a rich and flexible feature set to the humble USB bus along with Pro level sound quality throughout.


Zen Go Synergy Core is rather a mouthful, but like the unit itself this can be considered as two components. Firstly there’s Zen Go, the USB audio interface with its two analogue inputs (mic/line/Hi-Z), dual analogue stereo monitor outputs (TRS and RCA), two separate headphone outputs and S/PDIF I/O. The Synergy Core part is the DSP/FPGA processing platform featured in a number of Antelope Audio interfaces which hosts their range of plugins, from modelled vintage compressors to guitar amps and Auto-Tune.

The Zen Go comes with 37 of these and can run 32 simultaneously within its internal mixer architecture. More effects can be purchased from the Synergy Core library and the bundled AFX2DAW plugin provides a bridge to host them in your DAW without the CPU load.

Zen Go is a bus-powered interface which houses a second, auxiliary USB-C socket for additional power when the host USB bus cannot provide the necessary current. Once hooked up the relatively lightweight unit’s LCD screen comes to life with input metering, the first headphone level meter and basic clocking source and sample rate info. To the right of the screen are three buttons, two of which access the input gain and headphone/monitor output levels. The large stepped knob next to these can then be spun to set the relevant gains/levels, whilst clicking it cycles related states. For the inputs this means switching between microphone, line and high impedance (instrument) inputs, with a long hold for +48v phantom power. For the monitor output and headphones a short clock will toggle muting and a longer hold will dim the associated output.

The third button, the ‘Antelope’ switch, can be used in conjunction with the other two to load or save five presets, which include all the settings from routing and monitoring to channel effects. Holding either of the two upper buttons will open menus for sample rate, clock source, screen, brightness, power source selection and so on. There is plenty that can be controlled from the Zen Go hardware, but for full detail the user needs to dive into the control panel on their computer. 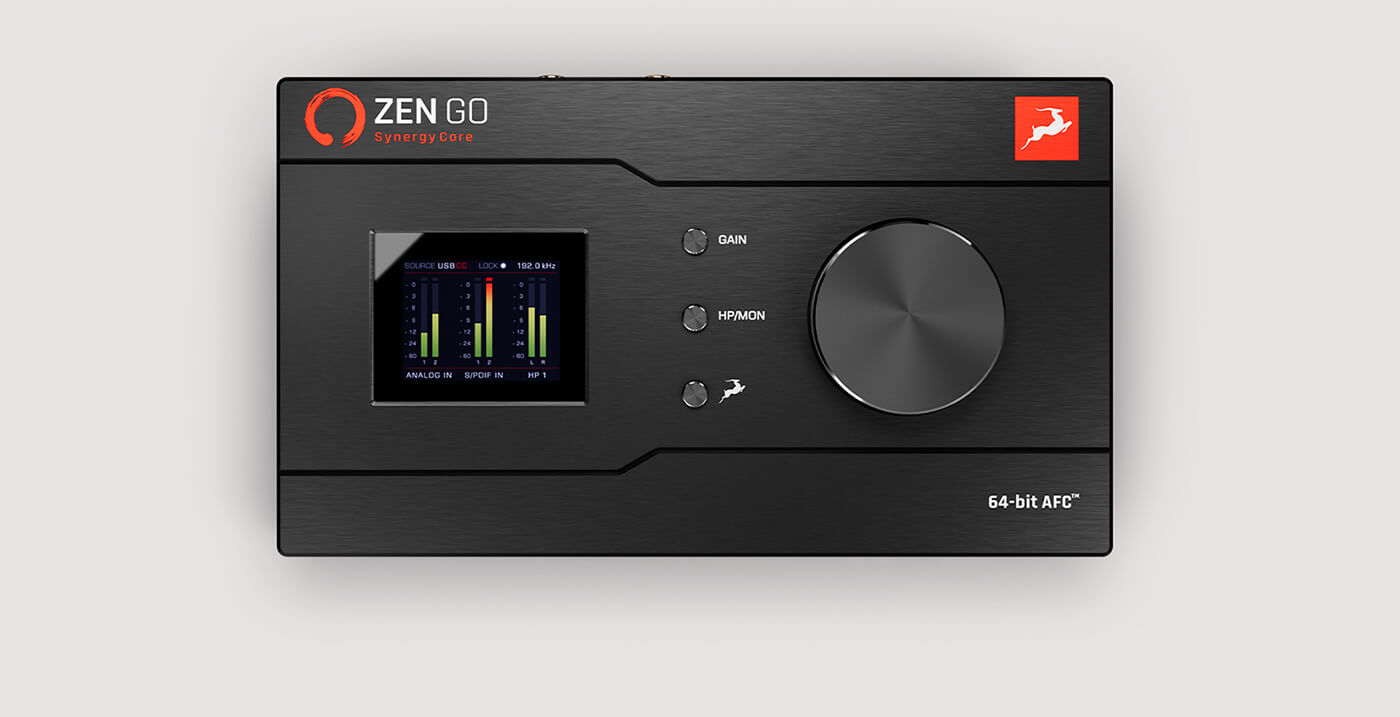 The control panel opens onto the Monitors & Headphones page where an eight or sixteen channel mixer (user definable) complete with faders, pan pots, meters and solo/mute buttons feeds the combined monitor and headphones 1 mix or the headphones 2 mix via a second tab. These channels can be fed by an array of sources: preamps and mic emulations, S/PDIF inputs, any of the eight USB playback channels or the two test oscillators which can be used to check lines and set gains. Aside from the five preset slots in accessible through the hardware unit the control panel offers users a comprehensive system for saving and loading whole or partial snapshots of the setup, e.g. just the routing but not the effects chains. The previously mentioned mic emulations refer to Antelope Audio’s Edge and Verge modelling microphones which can be monitored and recorded alongside their dry/un-modelled outputs.

It is worth noting that only the first four channels of this mixer possess effects slots, each of which can chain up to eight plugins. These chains can be individually stored/recalled, and where two mono channels are linked into stereo the left acts as master. The other source of effects is the AuraVerb page, a separate window accessible from any of the three main routing spaces. A row of sixteen sends and pan pots appear for the playback channels above an eight knob reverb effect which can be sent to the two monitor paths (Mon/HP1 and HP2) independently.This is very much a room reverb with controls that allow a balance between early and late reflections. It is great for giving a little space to dry recordings and setups, or aiding monitoring of a vocal or acoustic instrument, but it’s not going to replace a quality EMT plate or Lexicon 480L emulation.

In and out DAW

The second routing page is just the S/PDIF output, while the third brings up two rows of eight level meters: To DAW and From DAW. The upper row can be sourced from anything available in the monitoring section as well as loopbacks of the two monitoring mixes, which seriously expands the range of the Zen Go as a recording and broadcast device. Overall it is hard to fault the level of flexibility this seemingly modest interface can provide. Obviously it comes to nought if the sound quality doesn’t match.

The monitor outputs are clean and clear with the headphone amps providing plenty of heft for most cans across the impedance range. As a recording device the Zen Go also delivers unfettered clarity, from mics, line level sources and instruments alike. The noise floor is appreciably low and in conjunction with the 65dB gain there’s no disappointment when a ribbon or low output dynamic mic is plugged in. With the ability to convert at high sample rates, coupled with Antelope Audio’s 64-bit AFC clocking, the hardware end of the deal is solidly professional, and for those wanting some mic mojo the emulation option may be of interest with the Edge and Verge mics.

The bundled set of 37 Synergy Core effects provide a healthy range of processing power to finesse recordings, spice up monitoring and develop pro quality portable broadcast setups without troubling your computer, and with the eight USB recording channels on tap there’s ample space to cut wet and dry signals simultaneously.

The Zen Go is well priced for its sound quality, routing flexibility, channel count and DSP operation. It sits between the UA Volt 276 and Apollo Twin X in price, but is closer to the latter in features, though without the MIDI of the former. The hardware is well built yet light, which is good for a life in and out of bags, whilst on the software side it is easy to work with, requiring only the scantest of manual skims. All in all the Zen Go is hard to fault. 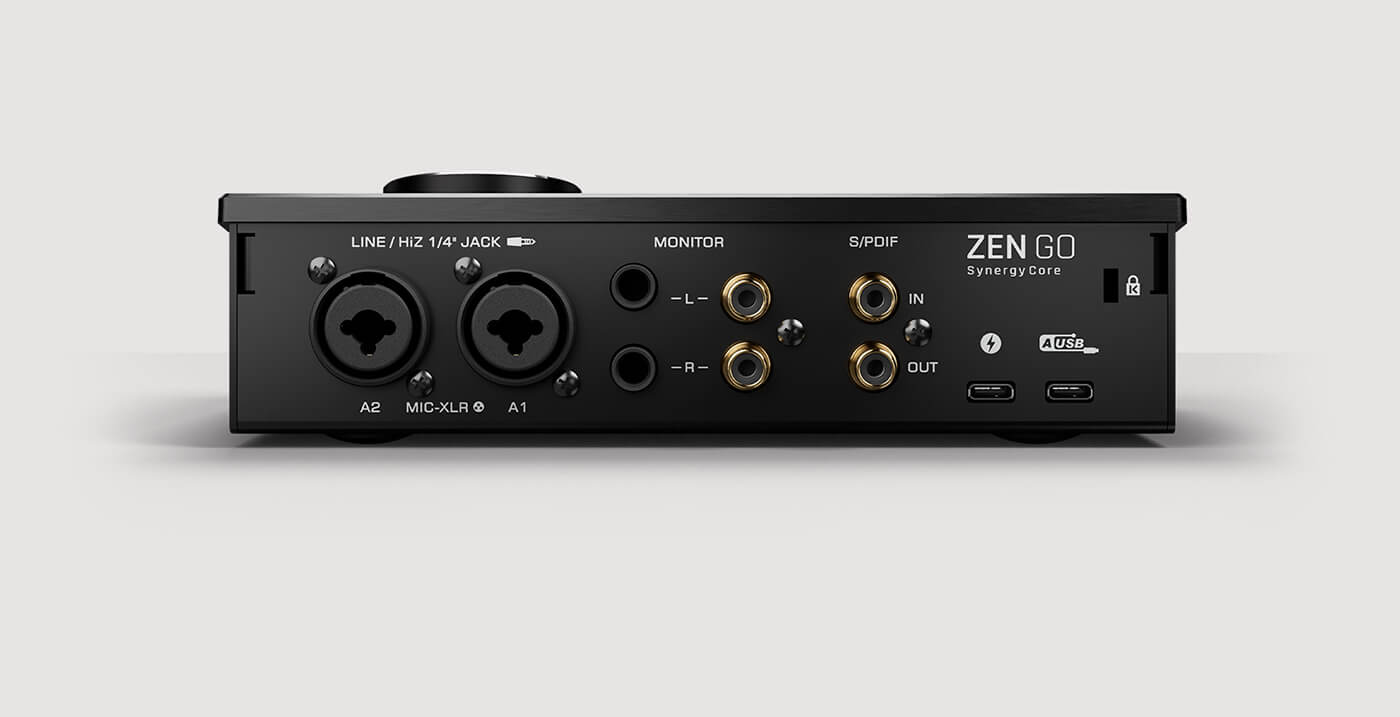