It’s 50 years since the release of the UREI 1176. John Pickford looks back at this classic compressor and how you can get its sound today… Musical innovation within the pop-recording world was at an all-time high in the mid-1960s, both in terms of sound recording technology and the recordings that were produced. 1966 was […] 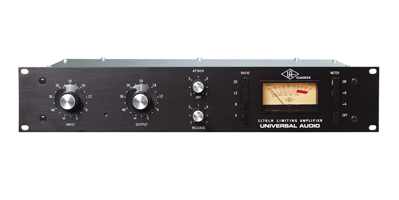 It’s 50 years since the release of the UREI 1176. John Pickford looks back at this classic compressor and how you can get its sound today…

Musical innovation within the pop-recording world was at an all-time high in the mid-1960s, both in terms of sound recording technology and the recordings that were produced.

1966 was a particularly rewarding year, with the release of groundbreaking albums such as the Beach Boys’ Pet Sounds and The Beatles’ Revolver along with the first recordings from The Jimi Hendrix Experience and Cream.

1966 was also the year that work began on the design of what is arguably the greatest solid-state compressor/limiter of all time, the UREI 1176. When United Recording Electronics Industries’ founder Bill Putnam designed the transistorised 1176, solid-state technology was in its infancy.

Putnam had become interested in the sonic properties of FETs – Field Effect Transistors – and set about creating a design based around his 1108 preamplifier design.

At this time, Putnam was both a veteran and a pioneer of sound-recording technology, having built the first mixing consoles that could be used with the multi-track tape recorders invented by his friend and contemporary, Les Paul.

He also founded Universal Audio, makers of the LA-2A tube (valve) compressor that is often thought of as the forefather of the UREI 1176.

First appearing in 1967, the earliest 1176s were finished in brushed aluminium, with blue paint surrounding the large VU meter.

Front-panel controls consisted of an Input Level pot that also acts as a Threshold control, an Output Level pot that provides gain make up, a continuously variable Attack control pot with response times ranging from 20 to 100 microseconds and a similar Release control that allows for an adjustable release time of 50 to 1,100 milliseconds.

Long ago, engineers discovered that an aggressive, yet musically pleasing style of compression could be achieved by selecting all four ratios simultaneously. This effect is known as ‘all button mode’ or ‘British Mode’ and gives a ratio somewhere between 12:1 and 20:1, for a dynamic effect that is particularly good on drum tracks.

Over the years, the UREI 1176 went through many revisions: the most important of which was revision C in 1970, which employed Brad Plunkett’s low-noise circuitry, reducing noise by 6dB. From then on, the unit was known as the UREI 1176LN. 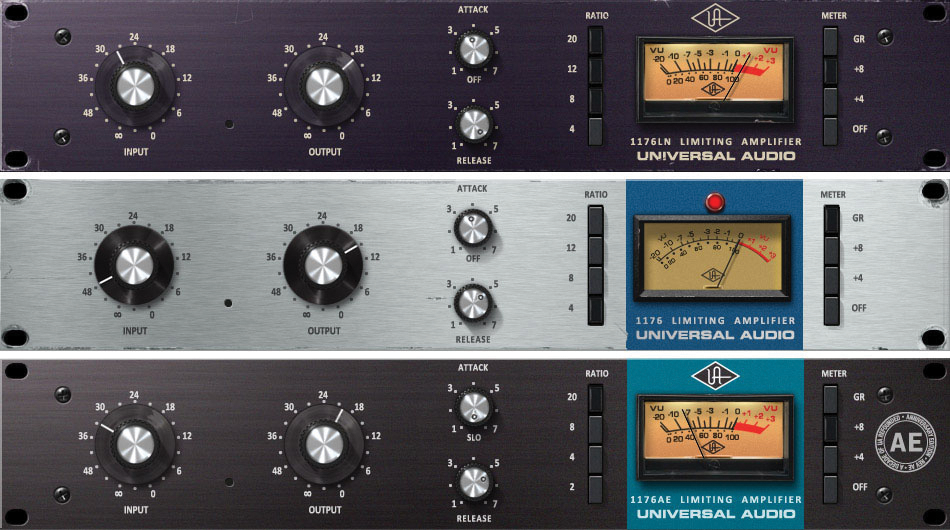 If you’re hankering after a splash of its legendary vintage warmth, there are plenty of flavours of UREI 1176 in the software and hardware realms (See all images sprinkled throughout this feature for different variations)

The two revisions that followed – D and E – are regarded as the best-sounding units of all; many of the replicas that have appeared in more recent times have been based upon these revisions. By this time, the brushed aluminium faceplate had been replaced with the black front panel that is most commonly associated with the unit.

Revision F, from 1973, substituted the original Class A amplifier design to Class AB and while this provided more output drive, many engineers found that it had a negative effect on the unit’s sound quality.

The UREI 1176 is an extremely versatile dynamics processor yet quite intuitive to use. It excels on lead-vocal tracks, imparting a biting presence that gives great definition.

Bruce Swedien often used one of a pair personally selected by Bill Putnam to record many of Michael Jackson’s hits. An effective vocal-processing trick is to use an 1176 as a peak limiter in conjunction with the smooth compression of an LA-2A.

The ‘all button mode’ produces a wonderfully punchy bass guitar sound, while a stereo-linked pair in this mode can help create a huge, powerful sound when strapped across a drum-kit group.

Universal Audio still manufactures the 1176LN, based upon the most revered revision of the original units. Specially trained staff hand-wire and test each unit, ensuring a no-compromise approach to quality.

For a more affordable, yet still great-sounding take on the original, check out Warm Audio’s WA76.

It features a fully discrete signal path and uses superb CineMag transformers. Designed to offer the character of the much-loved Revision D, the WA76 delivers all of the 1176’s legendary performance and sound at a fraction of the price of the hand-wired UA 1176.

The use of an external wall-wart power supply might put off some; however, this means that Warm Audio has spent money on the components that really matter, enabling it to offer the unit at the bargain price of £499 (Nova Distribution 0203 589 2530).

Lindell Audio also produces the 17XS MkII which we described as “a thoroughly modern take on the classic UREI 1176 compressor with several useful features that make it an extremely versatile single-channel dynamics controller.

Universal Audio also offers a trio of 1176s as a plug-in package. It comprises Bill Putnam’s original Revision A ‘bluestripe’ model, complete with its higher distortion and unique FET gain amplifier characteristics, along with a classic ‘blackface’ 1176LN from the early 1970s.

Waves’ plug-in package, named CLA-76, also features simulations of the original Revision A and classic Revision E. Expect to pay around £75 if you shop around.

The UREI 1176 is characterised by a big, clear and open sound, yet it will also happily contribute a degree of bite and grit when pushed hard.

A subtle boost of lower midrange frequencies adds body and warmth that sounds superb on most vocal tracks and all manner of instruments.

Many engineers like to pass audio through an 1176 even when no compression is required, so that the unit’s lovely full-bodied yet bright tone flatters the original signal.

Making judicious use of the Attack and Release controls can inject a real sense of energy that helps drive along pop, rock and dance recordings – while the ‘British Mode’ of selecting all four compression ratios simultaneously will produce an aggressive character with some mild saturation