Few products can claim to have survived over 40 years in the business, but AKG’s enduring C414 is certainly one. John Pickford has the story. When we spoke to Portishead writer and producer Geoff Barrow he told us that the band’s award-winning debut album was recorded almost exclusively with AKG C414 microphones. The C414 story […] 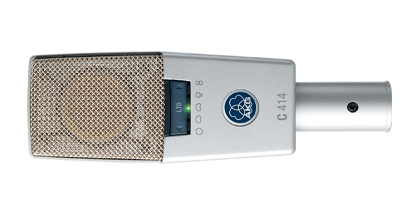 Few products can claim to have survived over 40 years in the business, but AKG’s enduring C414 is certainly one. John Pickford has the story.

When we spoke to Portishead writer and producer Geoff Barrow he told us that the band’s award-winning debut album was recorded almost exclusively with AKG C414 microphones. The C414 story began in 1953, when AKG introduced the CK12 microphone capsule, incorporating it into its C12 condenser mic. This valve model became an industry standard and is now one of the most sought-after and expensive of all vintage valve mics. Towards the end of the 60s, transistors began to replace valves in many audio products, inspiring AKG to design the solid-state C 412, which made use of semiconductor (FET) technology along with the much-loved CK12 capsule.

However, this model was short-lived, as its three available polar patterns – omni, cardioid and figure-8 – was deemed insufficient by the BBC, one of AKG’s biggest customers. The company responded by adding a fourth pattern – hypercardioid – and so, in 1971, the C 414 was born.

Early C 414s retained much of the sound of the valve C12s, largely due to the CK12 capsule, which delivered a clean and transparent midrange as well as a superb high-end response that extended far above Neumann’s warmer-sounding condensers.

The first of several revisions appeared in 1976 with the introduction of the C 414 EB (Extended Bass), which featured a three-position bass roll-off switch – flat, 75Hz and 150Hz – as well as an improved pad facility that offered either 10 or 20dB of attenuation. This new model was very well received as the sparkling high-end response was now supported by a more robust low end.

It wasn’t all good news though, as a few years later AKG ceased production of the original brass-ringed CK12 capsule, replacing it with a nylon design that altered the microphone’s character. Many engineers felt that the new capsule lacked the high-frequency extension that had made the C 414 EB and its predecessors so special, giving the mic a slightly darker sound (the new capsule featured in all subsequent C 414 models until 1993).

AKG expanded the range during the 1980s to include a remote-controlled model (useful for switching polar patterns in fixed-mic situations) and the C 414 EB-P48, designed to work exclusively with 48V phantom power rather than the variable power ratings that could be used with earlier models.

A complete revamp was carried out in the mid-80s, leading to the release of the Ultra Linear Series model in 1986, the C 414 B-ULS. This microphone featured extra gain stages to lower the noise floor and employed 17 transistors as opposed to the four used in earlier designs.

With excellent performance figures, the new model proved to be very popular, remaining in production for 18 years and becoming the most successful C 414 of all. Despite its popularity, some engineers noted that this model sounded even darker than the nylon-capsule version of the C 414 EB, leading to requests for AKG to issue a model voiced to sound more like the original early 70s version.

The C 414 B TL-II (1993) was a transformer-less design that employed a much brighter-sounding capsule, emulating the original design. Ironically, fans of the ULS, who had probably never heard an original model, complained that the new version sounded too bright!

For the first revision of the new millennium, AKG redesigned the body shell, with rounded edges replacing the classic square look. The C414 B-XLS (2004) featured logic circuitry for all switching gear, with chosen settings highlighted with LEDs; these switches were lockable to avoid accidental switching. At this time a soft-cardioid setting was added to the polar pattern options.

Two C 414 models are currently available, both of which boast nine selectable polar patterns. The C 414 XLS is essentially a modern-day equivalent of the popular dark-sounding ULS version, while the new C414 XL-II is more closely related to the original design, complete with a presence boost above 3kHz.

Sounding magnificent on everything from acoustic instruments, drum overheads and vocals, AKG C 414s – in all of their various guises – have been successfully used in numerous studio and live applications for over four decades. Long may they continue to do so…