Steinberg has dipped its toes into the iOS app world previously, but now it has released something far more adventurous, taking the name of a long discontinued product and resurrecting it for a new age of music technology. Cubasis is an iPad-based recording and sequencing application that runs on iPad 2 and newer, including the […] 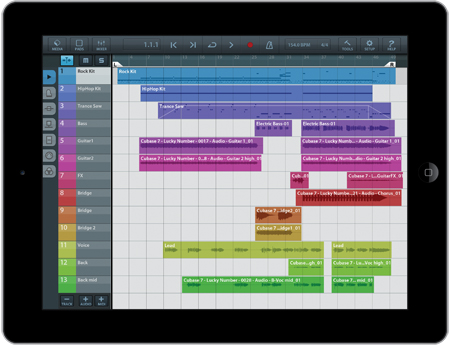 Steinberg has dipped its toes into the iOS app world previously, but now it has released something far more adventurous, taking the name of a long discontinued product and resurrecting it for a new age of music technology. Cubasis is an iPad-based recording and sequencing application that runs on iPad 2 and newer, including the iPad Mini. It’s a bold step by the German developer, but one that makes a lot of sense, as we will see.

Before we go into detail, a word about the price. iOS pricing seems to bear little relation to the real world, with some users expecting everything to be free or cost 69p. In the case of big companies like Apple, they can do this because their profits come largely from the Apple hardware that you need to run these apps on. The vast majority of developers, however, have no such luxury, and coding good apps takes time, skill and a great deal of work. So before you get too hung up on the price (about the same as an iPad case), have a look at what it can do.

Cubasis is a 253MB download from the App Store and it runs on iPad 2 or newer. There’s 48-voice polyphony on iPad 2 and Mini, and 64 voices on iPad 3 and 4. This can be set lower if you prefer (if you are experiencing dropouts, for example). You also get unlimited audio and MIDI tracks, up to the capacity of your device. This sets Cubasis apart from many other iPad DAWs and runs contrary to the perceived wisdom that you can have only eight tracks before having to bounce down. Apparently this is an artificially imposed limit, presumably in place to ensure smooth performance when polyphony controls aren’t provided. There will be a point at which even the most powerful iPad runs out of steam, but with newer models you seem to be able to go way beyond eight tracks in Cubasis before this happens.

The app closely resembles the latest desktop version of Cubase, but has been written from scratch to make it work better with multitouch rather than simply being ported over. The Media button at the top left provides access to your content and is where you create and manage projects. Time signature and tempo can be set and there’s a tap-tempo option. All recording is CD-quality and adding audio and MIDI tracks is as simple as tapping the Add button. The layout will be familiar to any Cubase user, and makes a lot of sense even if you’re new to the platform. Tracks live in the main area and each one has an Inspector panel to the left from where you access its settings. Tracks are easy to name and colour-code, and there’s an excellent pinch-to-zoom system for navigating a project.

Audio tracks can have their input set to read from the built-in mic or any compatible audio-input device, of which there are many. The Insert section lets you add three from a selection of 11 effects, each with an easy-to-use pop-up control window. You get delay, reverb, chorus, compressor, amp simulator and more, and they all sound great. There are three send slots available per track, too, each with access to the same array of effects. The Channel tab for an audio track contains pan, fader, mute, solo and audition controls; finally, the Colour tab enables you to assign a colour.

You can record into audio tracks or add loops from the library via AudioPaste or from iTunes. You can also import files using the iTunes file-sharing tab, as with other apps. There is a good selection of loops that can be previewed from the Media Browser and which are converted from MP3 to WAV format on import. These are tagged with BPM, though it’s not possible to time-stretch loops at present (Steinberg says this feature isn’t high up its list of priorities for implementation). It’s a shame because it means loops are limited to their original tempo, though you can always stretch them on your Mac or PC if you need to.

Audio can be edited by double-tapping on it to open it in the Sample Editor, which is very smooth and contains trim, erase, reverse, normalise and fade commands. There’s also a facility to take snapshots of a project at any point, which is very handy.

MIDI tracks can use any of the more than 70 instruments provided, based on HALion SonicMixer and comprising pianos, drums, synths, organs, guitars, brass and more. Again, these all sound good – if slightly on the safe side – and all kinds of CoreMIDI-compatible input devices are supported in addition to a clever virtual keyboard and pad system. The keyboard is scalable and has sustain and mod wheel controls as well as ten buttons that store programmable chords for quick access. There’s a dedicated pad section too for playing beats more intuitively and this can also be set up to trigger chords.

MIDI editing is beautifully handled, with the Key Editor supporting easy pinch-to-zoom and scroll, moving of notes, transposition and quantization and copy and paste via the toolbar that can be shown at the top of the app. There are also Glue, Erase, Draw and other handy tools, though – rather disappointingly – no automation. Audio clips have volume and fade handles, which helps with changing volume automatically (though more automation would be nice). Projects can be shared in a number of ways including mixing down to compressed or uncompressed audio, sending to Dropbox or SoundCloud (or, indeed, exported as raw project data back to Cubase on your Mac or PC for completion). This is crucial because as with GarageBand for iPad it means you don’t have to finish a project on-the-move, but you can use Cubasis for tracking and working on ideas then switch to your desktop system later. It’s possible to assign MIDI tracks to play other instruments on your iPad via virtual MIDI and hear the results mixed with the tracks running inside Cubasis.

Cubasis is a remarkably slick and polished iOS app and arguably the most complete mobile DAW produced to date. Steinberg has made an excellent job of re-creating the friendly and usable interface of Cubase on the iPad and the result is an app that feels intuitive and is fun to use. The ability to keep adding tracks is great and the onboard editors are good, as are the multitude of export options (and, of course, the ability to move to Cubase on the desktop). We’d hope to see automation and time-stretching added in future, but on the whole this is a very strong start for Steinberg on the iPad platform.

+ Easy and friendly to use

+ Good selection of instruments and effects

+ Export to Cubase on your desktop

Probably the best iPad-based DAW in terms of usability and flexibility, and it links up with Cubase on your desktop, too.