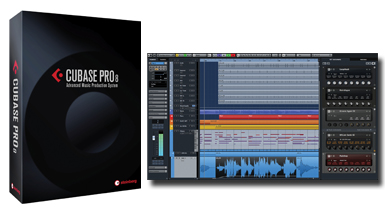 Cubase was always a great DAW but now it’s officially gone Pro. Hollin Jones finds out what all the fuss is about… 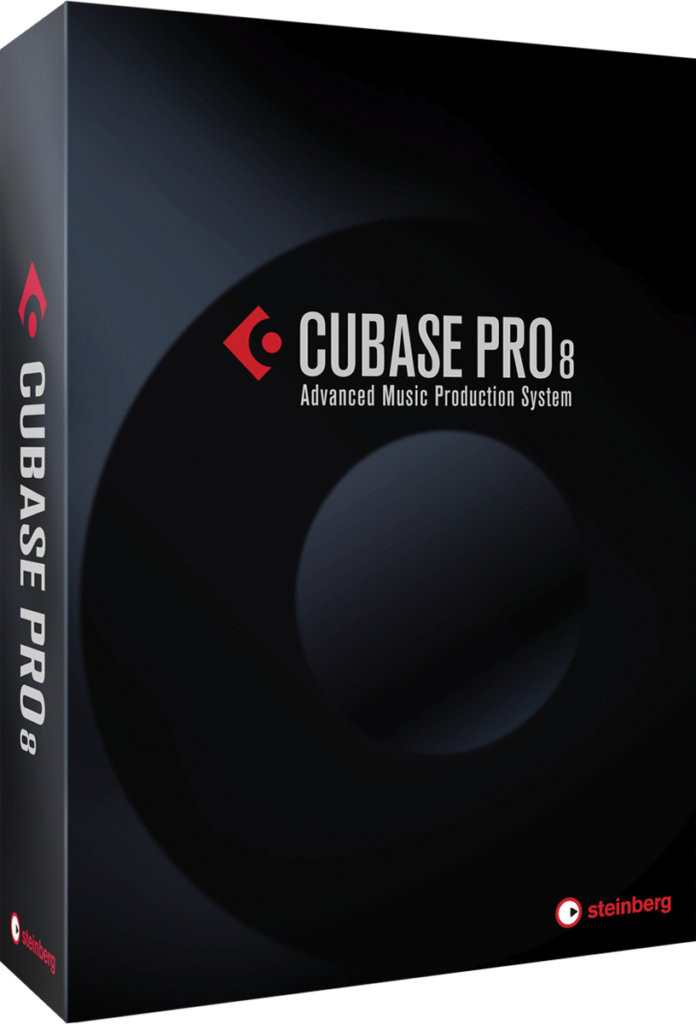 Cubase is one of the oldest names in computer music and in its relatively long life has gone through several major rewrites, sometimes from the ground up; and what started life as a MIDI sequencer has for many years now been an all-singing, all-dancing music production environment.

It’s sometimes a little overlooked in all the shouting about other DAWs but this is rather unjust since it’s an extremely accomplished piece of software, even more so thanks to this latest update. 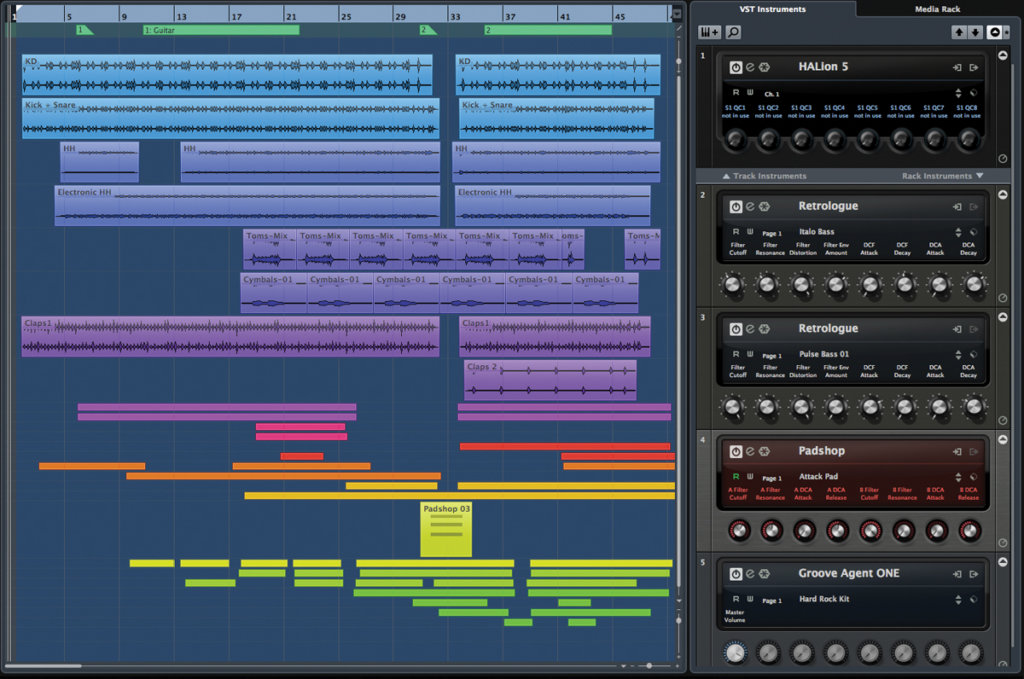 The flagship version now has ‘Pro’ added to its name, perhaps with a nod towards reminding people that it is a top-flight DAW that’s easily the equal of the competition, and arguably, in some ways, superior. Of course everyone has their die-hard allegiances, but it’s possible that version 8 of Cubase could win over even more fans at the serious end of music production.

and progressive than updates from recent years. It’s a 9GB download or install from DVD, and authorisation is via a USB licenser. Most of that content is for the bundled instruments, and you can offload it to a secondary drive during installation.

The first thing that strikes you about Cubase Pro 8 is that it feels quick. Really quick. Steinberg has done a lot of work on the engine at the program’s core and you can definitely tell.

It’s slick and snappy, and ASIO performance, and thus latency, has been greatly improved. This is partly thanks to ASIO Guard 2, a technology that prioritises live input tracks over simple playback ones to get better performance without constantly messing with buffer settings.

Good Housekeeping
The GUI has been cleaned up and refined as well. Cubase 7.5 didn’t feel particularly like it needed much tweaking in this respect, but after using 8 you realise that it wasn’t perfect. Contrast and legibility have been improved, and it feels like some of the icons are clearer in their function as well.

Cubase has taken the first steps towards embracing a more one-window design with a new virtual instrument and MediaBay rack which can live on the right-hand side of the project window. This is nice because it means these windows don’t have to float, although they are still available separately if you prefer.

The virtual instrument section is great, giving you access to all the major parameters related to an instrument from a concise panel, including auto mapping to the Quick Controls in many cases. It’ll definitely make searching, loading and tweaking instruments easier. This section is resizeable, as is the border between the track list and main project area.

The new rack can be hidden with a few clicks, though a ‘close’ button on the tabs themselves would be even better. There’s an expanded Track Controls setup window which gives you a live preview and is split by track type, which is very helpful.

Cubase’s mixer goes from strength to strength with the introduction of new VCA faders. More conventionally found on analogue consoles, these enable gain control for multiple channel faders from a single fader, but without creating any more audio routing – they simply send DC voltage, or the digital equivalent. So you can assign any number of channels to a VCA fader then use it to move them all up or down, while also retaining individual editability for each one. You can even nest VCA faders by assigning several of them to a master. 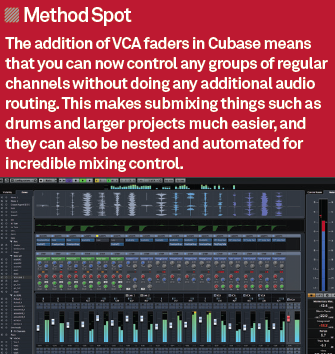 Since there’s no extra audio routing using groups or busses, things stay simple, and automating VCA faders now controls all channels assigned to them as well. This new feature is one of those that makes you wonder how you managed without it, and for people who mix things such as live drums it’s worth the upgrade price alone.

MixConsole also gets a new Wave Meters view that shows you song position on every channel as scrolling audio waveforms so you don’t have to keep looking at the Project window. Direct Routing enables you to set up group routing destinations for multiple channels, busses and stems at the same time and also export multiple versions of a project using the batch export window to save time.

The channel strip EQ has been improved to show precise visual feedback as you drag the mouse, and the new Virgin Territories automation feature means no more writing of default values between automation points, so you’re free to use the space between automation events for other adjustments.

In the Project window, a new Render In-Place option lets you bounce audio and MIDI internally, so no more bouncing out and re-importing. Usefully, not only can you specify what FX and other settings to include but there’s an option to preserve event boundaries so you don’t always end up with one long audio file.

MIDI has seen new developments too with a feature called Chord Pads. Increasingly popular as a concept, these let you use the mouse or any input device to play and record chords onto a MIDI track. They’re fully configurable for scale, note, inversion and so on, and a clever Chord Assistant shows you related chords to help you compose. It’s switchable between musical styles and between piano and guitar chords and it’s a genuinely useful tool, beautifully implemented with Steinberg’s excellent design skills.

A new MIDI tempo detection engine can help analyse a part that hasn’t been played to a click and adjust the project’s grid to it, letting you add drums afterwards without rigidly quantizing your original part. The plug-in manager in Cubase 8 has been improved too and now lets you create your own custom lists, which makes searching and loading even quicker than before.

Plug-in Power
The bundled content has been expanded and version 8 sees the return of Quadrafuzz, a now much more comprehensive four-band distortion unit with delay for dirtying up your tracks. VST Bass Amp delivers a collection of new amps, cabs and stompboxes, and there are new versions of the de-esser, multiband compressor, tuner, multiband expander and envelope shaper plug-ins.

On the instrument side there’s Groove Agent SE 4 Acoustic Agent, Allen Morgan’s Rock Pop construction kits, and all the other existing tools such as Retrologue, Padshop, HALion Sonic SE2 and LoopMash 2. VST Connect SE3, the online collaboration system, is also bundled and much better integrated into Cubase itself, meaning recording audio and MIDI over the internet is quicker and easier than before.

Cubase 8 feels like a really significant update, and covers a lot of ground in what it improves and adds. The software feels slicker, faster and more professional, fully deserving of the new Pro name. Workflow is better, as are compositional tools, plug-in management and operation and mixing. There’s a lot of stuff such as Render In-Place, better automation and direct routing that you didn’t necessarily miss in 7.5 but you definitely would now if you went back. None of this would mean as much if it had impacted on usability or performance, but remarkably

Steinberg has managed to improve both: markedly in the case of performance. Moves towards a more unified interface are encouraging, as there can still be some window juggling even if window management is better, especially on the PC.

This is one of the relatively rare occasions when even those on the last version will gain an awful lot of excellent functionality by upgrading, and that cost is relatively small.