Essentially, mixing console design hasn’t really changed all that much. Go back to the old EMI consoles such as the REDD.51 and you can see the basic design beginning to take shape, with modern consoles all based around banks of channel strips and a master section. Manufacturer: Line 6 Price: £1,900 Contact: Line 6 – […] 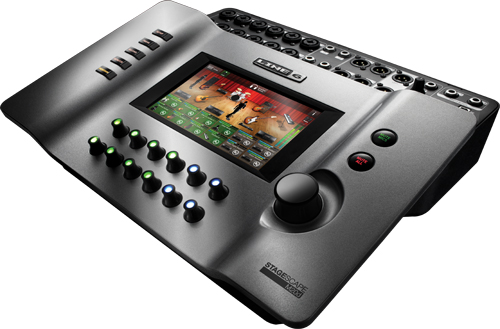 Essentially, mixing console design hasn’t really changed all that much. Go back to the old EMI consoles such as the REDD.51 and you can see the basic design beginning to take shape, with modern consoles all based around banks of channel strips and a master section.

Even digital consoles don’t steer too far from the basic blueprint. However, Line 6 has seized this opportunity to create a digital mixing console that automates as many of the typical tasks as possible, and aims to make the process of mixing faster, more intuitive and more creative.

The M20d does away with faders and channel strips, replacing them with a touchscreen interface. Other physical controls are minimal: a few buttons, 12 rotary encoders under the screen and a larger rotary encoder to one side. Line 6 has also released a free iPad app that can be configured to provide wireless control of the unit, enabling users to mix from other locations in a venue than just the sound booth. 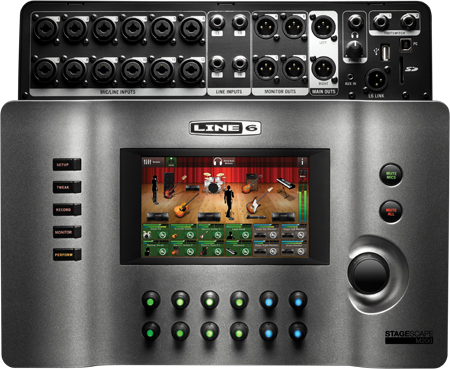 Gone are the banks of faders, knobs and complex routing options, replaced with a touchscreen interface and OS that automatically configures routing

At the top of the front panel are the I/O ports. The StageScape M20d has 18 analogue inputs, comprising 12 mic/line combo ports, four 1/4-inch line inputs and an 1/8-inch stereo aux input. Next to these are four XLR outputs for monitors and a pair of main outs (again on XLRs). Additionally, the I/O panel houses a headphone port with volume knob, two footswitch inputs and digital connectivity options for connecting USB drives, SD cards, DAWs and Line 6’s proprietary L6 Link port for connection to StageSource speakers.

The analogue I/O ports are all auto-sensing, so as soon as we connect our active speakers to the main output ports the software knows that speakers are attached and the XLR image for the main speakers are highlighted in the I/O panel of the screen. Similarly, when you plug an XLR into one of the mic inputs the software acknowledges this and adds a mic channel to the graphical representation of the stage on the touchscreen. Even the monitors and aux input are auto-sensing, with monitor routing all set up automatically as soon as the software senses a monitor as plugged in.

Once you’ve plugged everything in the visualisation of the stage on the screen should contain a number of mics, monitors, line inputs represented by DI boxes, and possibly an aux input represented by a digital music player. You can pick these up and move them around the stage to create a more accurate representation of your preferred setup.

Helpfully, instead of representing each mic with a generic mic or DI box icon you can change each one to better represent the instrument being mic’ed. For instance, you could create a simple female singer/songwriter setup with one mic and one DI’d acoustic, swapping the mic icon for a female vocalist icon and the DI for an acoustic guitar. This visual representation means that when it comes to mixing a show you can quickly find the right channel to edit – especially on busier stage setups.

As well as simply changing the icon, switching the generic icon from a mic to a dedicated instrument icon will change the presets of the accompanying channel strip. So, adding a male vocalist will bring up a preset that routes the signal through a gate, de-esser, dynamic EQ, compressor and six-band EQ. Changing the Male Lead preset for a Female Lead will retain the signal chain but alter some of the parameters to better suit a female voice. Other presets may have a different chain altogether, such as the Acoustic Direct, which comprises only a compressor and three-band EQ.

To complete the setup there is an Auto Trim mode that automatically sets the input level of each channel in response to the incoming signal level, ensuring that the signal doesn’t distort on input and overload the preamps. This also means that you can do a quick line check in a matter of seconds – great for those all-too-frequent gigs when there just isn’t enough time for a full soundcheck. 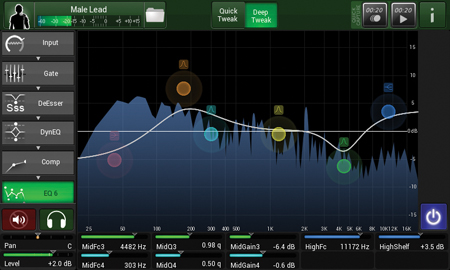 While the interface encourages the use of presets and macro controls such as the X/Y pad, seasoned users can still engage Deep Tweak mode and edit traditional effects parameters.

Tweak mode hides the virtual stage and brings up a new screen providing access to the effects parameters for the active channel. Here Line 6 has again stepped away from convention, replacing the traditional parameters for each effect with X/Y grids labelled with musical characteristics such as ‘smooth’, ‘open’, ‘punch’ and ‘air’. Different instruments have different X/Y pads available to them, controlling different sets of parameters, so you can quickly shape the sounds in your mix without getting bogged down with filter shapes and compressor ratios. In practice this can help you get to some great-sounding mixes very quickly. Shaping the kick drum by dragging a finger around an X/Y pad to get more ‘boom’ or more ‘snap’ is much faster than dialling in a little extra at 80Hz and 4kHz and scooping out around 400Hz. This method also forces you to use your ears more as you can’t rely on learnt rules, instead you are forced to listen and decide: is the kick too boomy, too snappy, or not snappy enough?

However, while this method is certainly fast and did occasionally result in us finding sounds that we might not otherwise have, we did find ourselves struggling sometimes to get instruments to sit exactly as we wanted them. For these occasions it is also possible to enter what Line 6 has called Deep Tweak mode, which presents the effects with their more common parameters available to edit.

Setting up a mix for the first time with the StageScape is easy enough, and once you’ve done it you can save the setup ready for another time if you are touring with the mixer and the same band. This is also useful for saving setups between bands, then starting fresh for each support act. You can also save scenes for each setup, which enables you to adjust the mix for specific songs in a set or for multiple bands with a similar setup.

These kinds of time-saving features have been common on digital desks for a while, and touring FOH engineers will commonly have presets for different console types saved to a USB key. If you can quickly recall 48 channels on a console you can save hours setting up.

However, with only 12 mic preamps and a total of 18 inputs including the aux, the StageScape is only of use for smaller performances, and in these circumstances the design seems like overkill. Small-format 16-channel analogue consoles are available for a fraction of the price of the StageScape, and while they are unlikely to have much, if anything, by way of effects other than a simple three-band EQ and maybe a DSP reverb, they are usually sufficient for a small venue or pub. The added dynamics processors alone make the StageScape a far superior option, but one that comes at a price. For larger venues, where digital consoles are more common, the limited number of inputs is going to become a problem. Once you start mic’ing up a drum kit you are likely to run out of mic inputs very quickly.

Line 6 has done a great job of a difficult task, remoulding the entire approach to live mixing. The paradigm shift won’t be to everyone’s liking, but with more live music being run on a small scale by musicians rather than dedicated engineers the StageScape is a great approach. A great sound can be brought up from presets, edited and saved, without having to learn about the fundamentals of audio engineering. Seasoned engineers may balk at being asked to work on this mixer, but we really enjoyed working with it. That it is largely based in software means new features can be addressed via an update, which could see touchscreen faders added for more hands-on real-time mixing, or perhaps new effects. If Line 6 can find a way of expanding the I/O options as well, this could be the start of something really big for the company.

– No faders for real-time control

The StageScape is a bold entry into the world of live sound. It will be fascinating to see where Line 6 goes next…