We had an exclusive play with Phobos last month. Now Andy Jones loads up the full version, to see if Spitfire’s first standalone instrument and synth delivers… 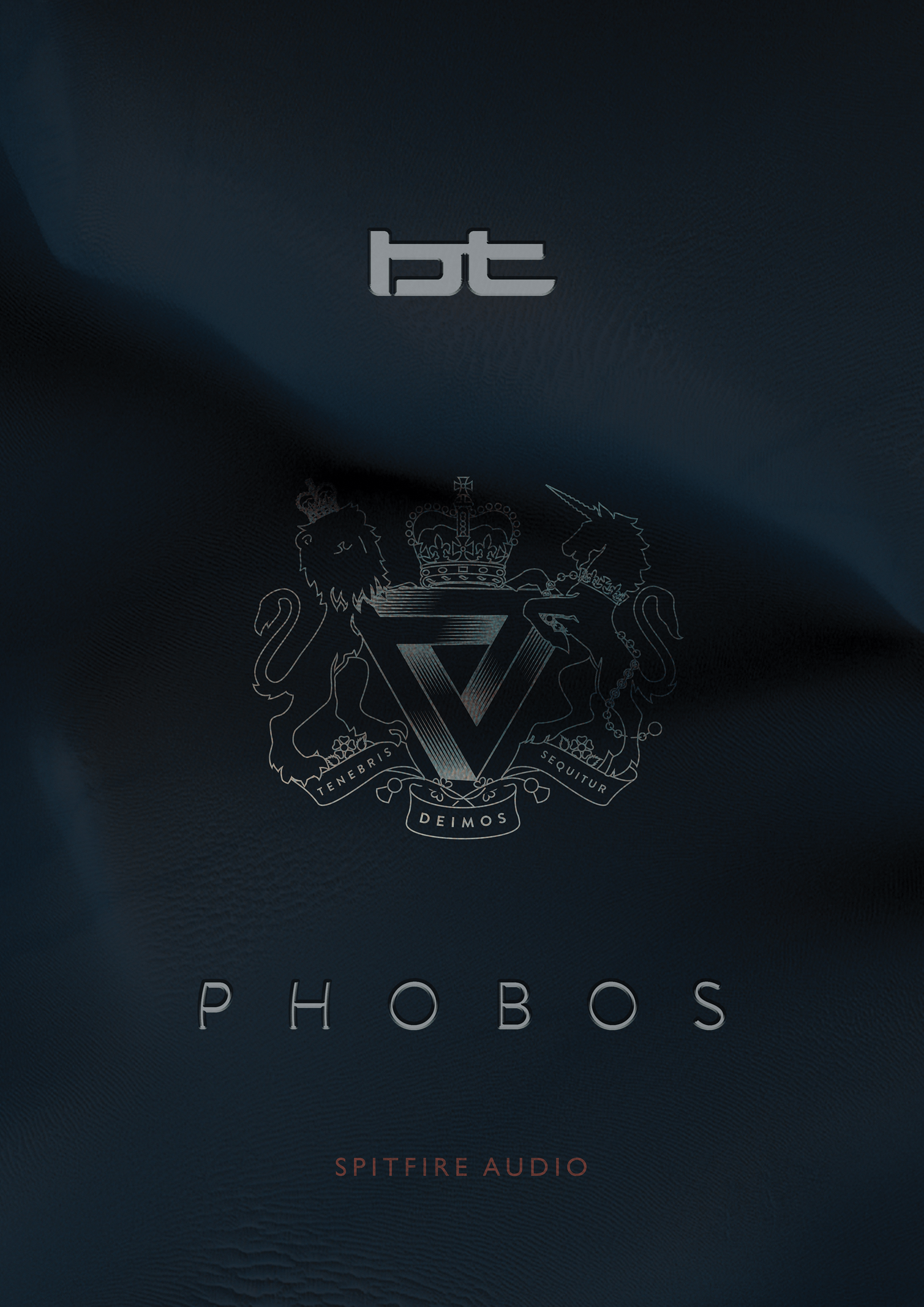 I’ve been lucky enough to have Spitfire’ Audio’s first synth and standalone instrument installed on my hard drive for a good while now and its sounds are quickly starting to creep into song ideas that have also been on my drive – indeed, it’s breathing completely new life into them.

Phobos is a sample-based synth with a 23GB library. It has sources, modifiers and modulation aplenty, but this is no ordinary synth, by any means. At its heart is what Spitfire calls Polyconvolution Synthesis – and like many other Spitfire Audio products, it’s aimed at soundtrack composers. Again, though, these soundtracks will be anything but ordinary. Phobos comes from a concept dreamed up by Brian Transeau (aka the ‘BT’ in BT Phobos) and any resulting tunes made with it will, quite simply, be out of this world.

BT Phobos runs as a standalone or plug-in instrument (AU, AAX, VST and VST3). I’ve been testing it within both Ableton Live and Logic, and it’s been pretty rock-solid throughout. The interface is very cool and might be unfamiliar to those expecting a ‘normal’ synth. Combine that with the fact that its synthesis is endless in nature – you can have sextrillion ways of combining sounds (that’s a 1 followed by 37 noughts) – and you might be afraid that BT Phobos it too complex to handle.

But fear not – a quick overview of the interface will help ease you in. I’ve therefore included an overview look at it on the following page above, plus a more detailed walkthrough on some of the main screen features later on.

You’ll soon realise that BT Phobos is a relatively easy beast to tame. It’s simply a matter of combining four Sources – rhythms, tones, loops, etc, from that 23GB of content – and applying them to three of what Spitfire calls Convolvers. And this is the only complex part to get your head around.

One other thing to note here is that the Convolvers are polyphonic, so each key press develops a response – meaning lots of sonic development, lots of movement and lots of interest. This is the crux of the Polyconvolution engine and one of those types of processes that you’ll learn more about and understand as you apply it in practice, so don’t worry too much about the maths now. BT Phobos invites you in to play on a quite simple level… and play you will. As you do, you’ll hear and learn what parameter does what.

The level of what you can do and what can be combined doesn’t end there, but don’t worry, I won’t list all sextrillion combinations, even though I am being paid by the word.

However, you need to be aware that not very far beneath the bonnet of BT Phobos is an extensive modulation section, where sources and destinations can be accessed and applied within a Mappings tab. By now, it probably won’t surprise you to hear that these are available for both Sources and Convolvers.

Well, why not? It would be churlish not to…

You’ll want to get straight into BT Phobos once you understand the basic side of its principles.

The first thing you’ll undoubtedly do is change your sound sources. Choosing from that 23GB of content could be rather a chore, but Spitfire has included some neat preset filtering options that let you choose by name, sound type, tempo and so on, so you can make decisions quite early on to home in on something specific. Yet the real joy, initially anyway, will be had from just drifting through the many sounds on offer and finding out how each either subtly or dramatically changes the preset you are working within.

And talking of these, I have come to the presets second, as they are rather hidden away in the Global area at the bottom-left of the GUI. I expect the preset location to be in your face and obvious (I’m such a preset surfer), but here, they’re not, perhaps encouraging you to get into the Sound Sources and experiment, which is exactly what I did.

Presets are produced by Paul Thomson (from Spitfire, whose overview video is well worth a watch), Richard Devine and BT. Within BT’s list, the preset categories include Atonal; Harmonic And Melodic; Hybrid Melodic And Rhythmic; or just Rhythmic, so you get a fairly good idea of the broad range of sonics here. I’ll go into more detail on these later.

Next, a quick look at the Modulation section. Click on the Mapping tab within either a Sound Source or Convolver to open this up. There are Source and Target drop-down menus, so you can easily select a CC type, or pitch or velocity as your Source to modulate whatever Target parameter (again another drop-down, featuring Filter, Envelope and Gate parameters).

As if that’s not enough, each of the seven Sources and Convolvers also has a more general parameter area that comes up when you click on each one’s main number (for the Sound Sources) or letter (W, X or Y for the Convolvers).

It’s here that you can access main parameters for pan and level, plus Envelope, Gate and Filter options for how the sound plays in a more general unmodulated way. Finally, just time to mention the Global LFO section, that features the main options for four LFOs that can be used in the Mapping section of each Source and Convolver. Here, you get to configure the main shapes and rates and they can be locked to your host tempo, which is probably a good thing, given the number of other sonic options available in BT Phobos. 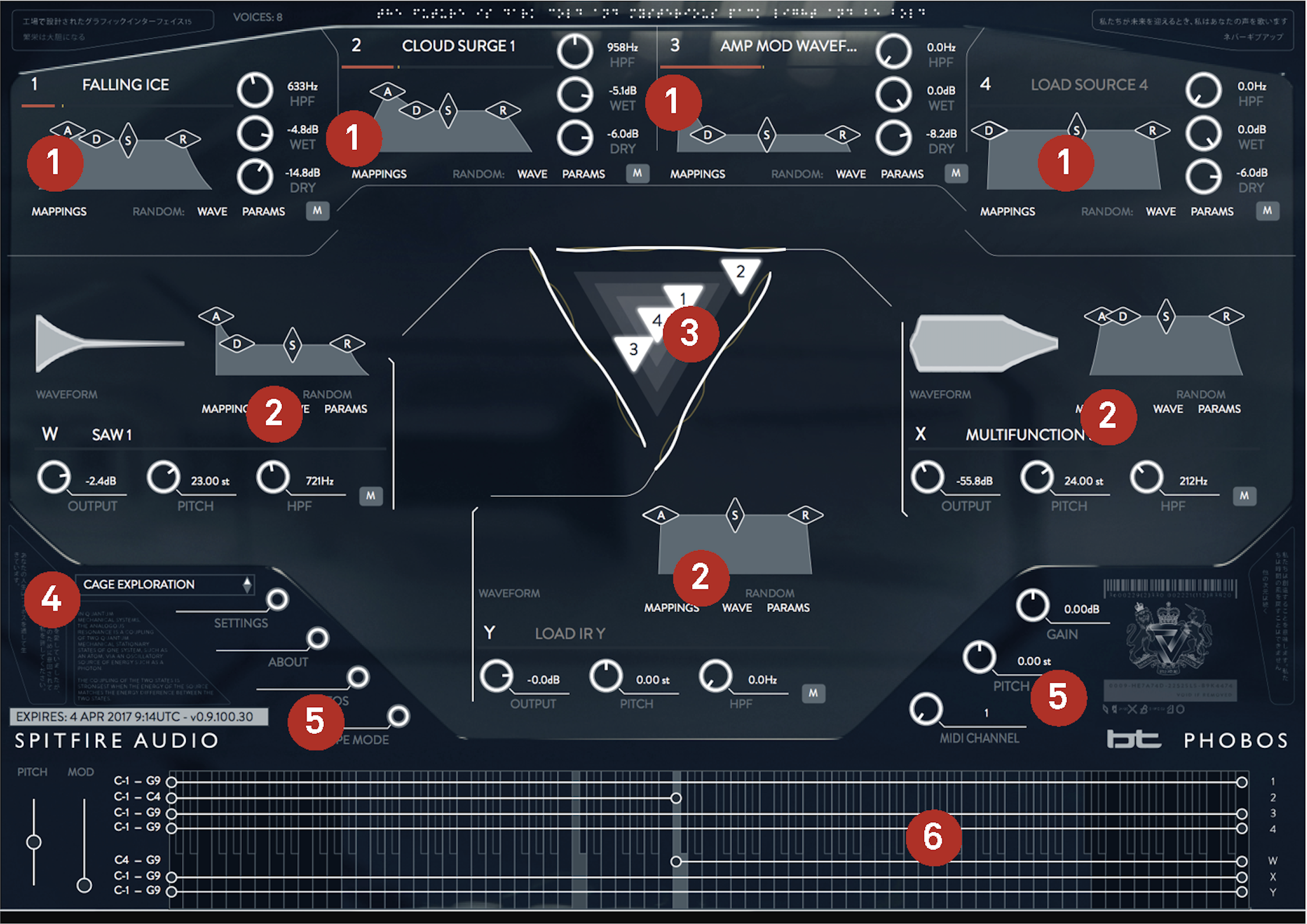 1. Sound sources – Choose from 2,381 Sound Sources to fill these four slots with atonal or rhythmic loops. The loops won’t change key as you press different notes

2. Convolvers – The three Convolvers are where Impulse Responses act upon the Sources in a polyphonic way, hence the ‘Polyconvolution’ engine tag

3. The convolver triangle – Each Source is shown here as a ‘Puck’, numbered by Source Sound. The placement of each Puck in this Triangle changes the level sent to the Convolvers

4. Presets – Somewhat hidden is the preset area – loaded with 716 sounds and combinations created by BT, Richard Devine and Spitfire’s own team

5. Global settings – Lots of settings can be accessed here, including overall volume, pitch, MIDI Channel and LFO parameters, plus an MPE mode for gear including ROLI’s RISE

What do points make?

Given these extensive options, do you know what such varied Sound Sources, Convolution options and the gazillion modulation possibilities equal? Sonic prizes, that’s what!

To try and describe in a simple way what BT Phobos delivers is impossible. There’s a lot of movement and a lot of futuristic sci-fi stuff, but that’s doing the software a huge disservice, because you get the feeling that you can create almost anything otherworldy here. Where Spitfire’s other collections mostly offer traditional or world orchestration, this is most definitely ‘off world’. The Atonal sounds mostly offer sinister and creepy tones straight out of horror soundtracks; or simply eerie whisps to add background sheen.

The straight Rhythms are interesting, as I thought they would be a little too obvious to use, but the beauty of BT Phobos is that you can quickly and dramatically change them, all the time easily retaining some semblance of the original beat to use as either the main – or more often background – breaks within your composition. On that level, it’s also like a huge sound-mangling and sample-hiding plug-in. Maybe the option for importing your own sounds into the BT Phobos environment will come within a future version…

BT’s Harmonic and Melodic section includes more pads, but these are pads times a thousand. There’s anything – from quietly understated and evolving, to rasping and metalic and evolving. You’ll notice I used the ‘e’ word twice there, because I think this is the key to BT Phobos. The Polyconvolution engine brings in the impulse-response factor, which means that you can have brilliant, constantly evolving results simply by pressing a key. It’s a point I made in my Preview last month.

When I reviewed old Korg and Roland synths back in the day, which featured lots of pad sounds that moved around over time, I used to talk about one note making one song. BT Phobos takes those evolving sounds and boots them straight into the 21st century and into completely new solar systems. The Hybrid Rhythmic and Melodic sounds in particular provide everything you need for a true one-note tune experience. 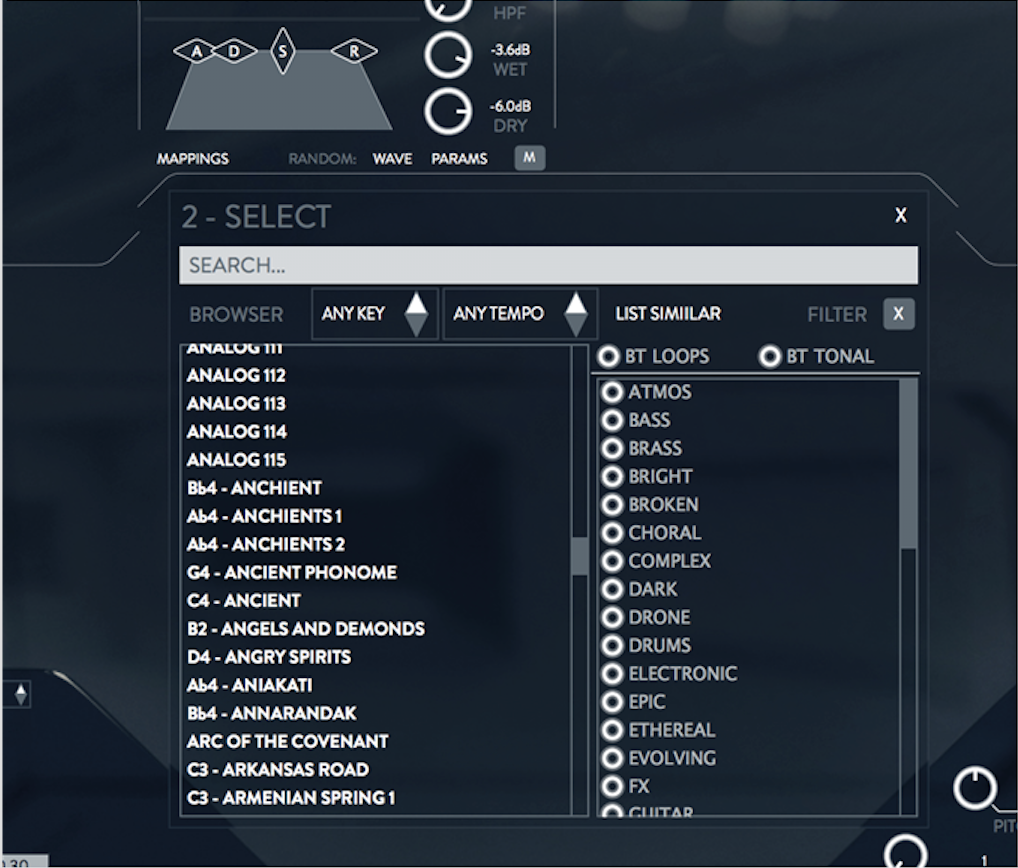 1. Select one of your main Sound Sources using a great filtering system to home in on a type. 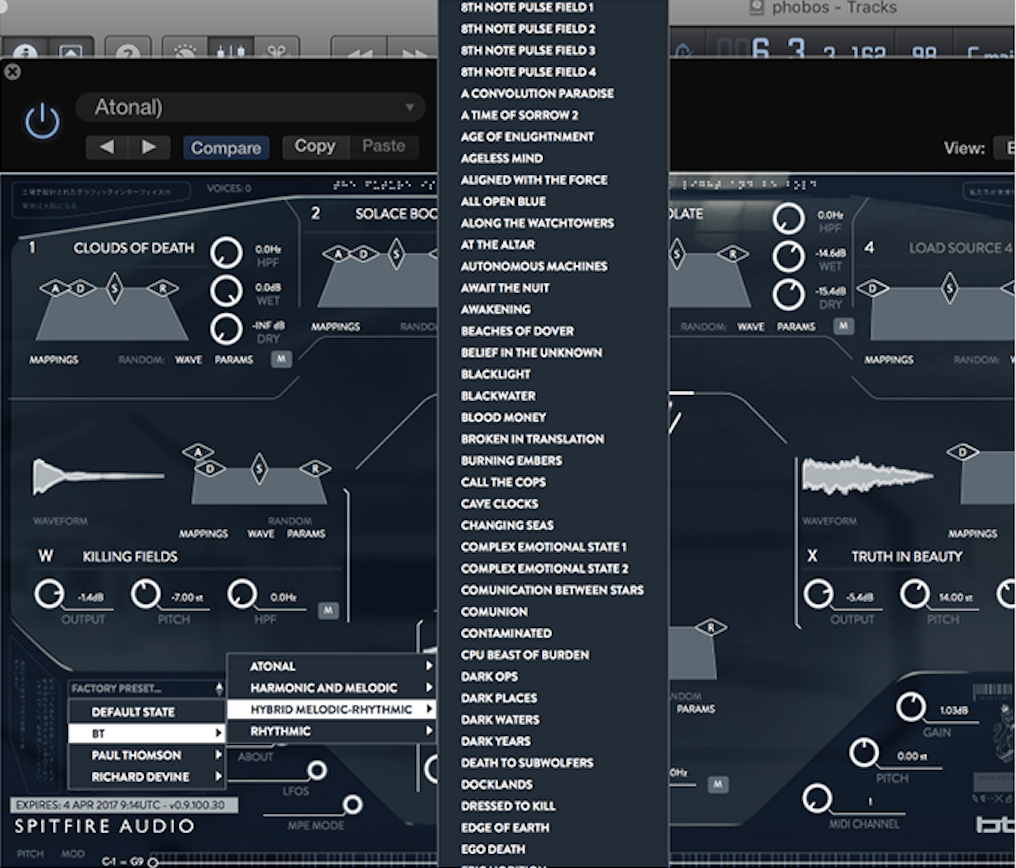 2. Here, BT’s presets are broken down into four types, with a drop-down menu within each. 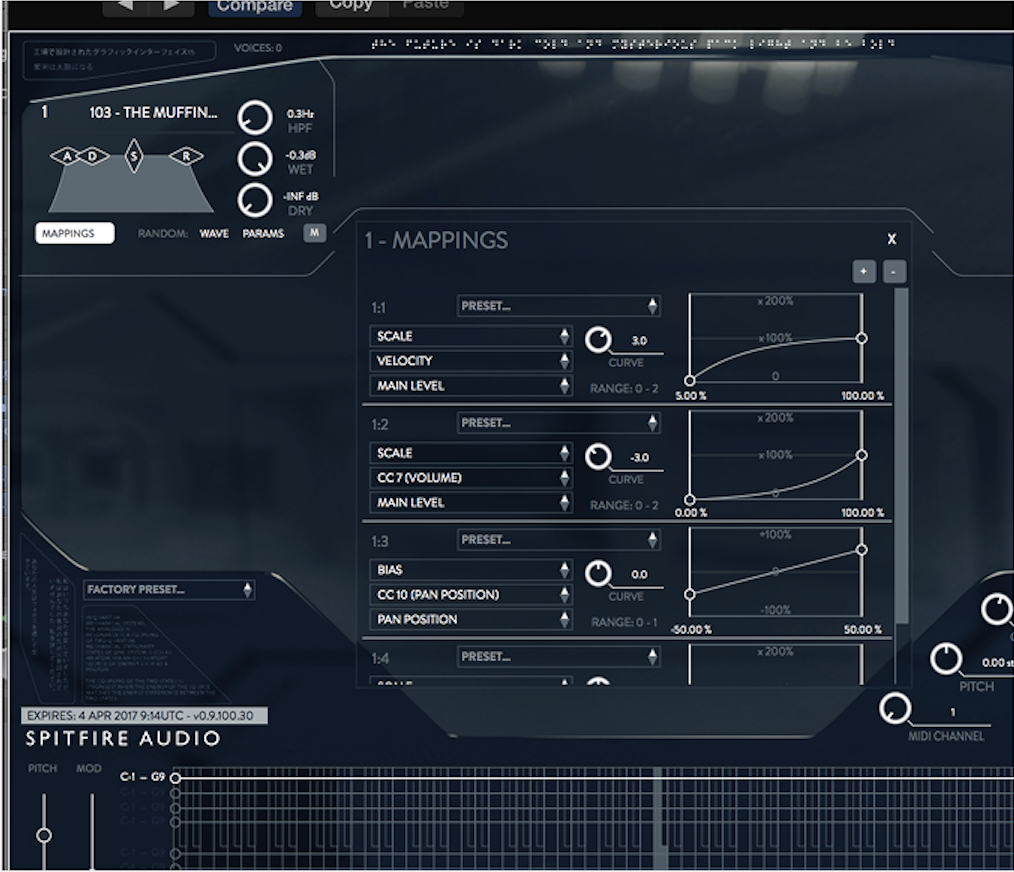 3. Click the Mappings tab for both Sound Sources and Convolvers to open up the Modulation area. 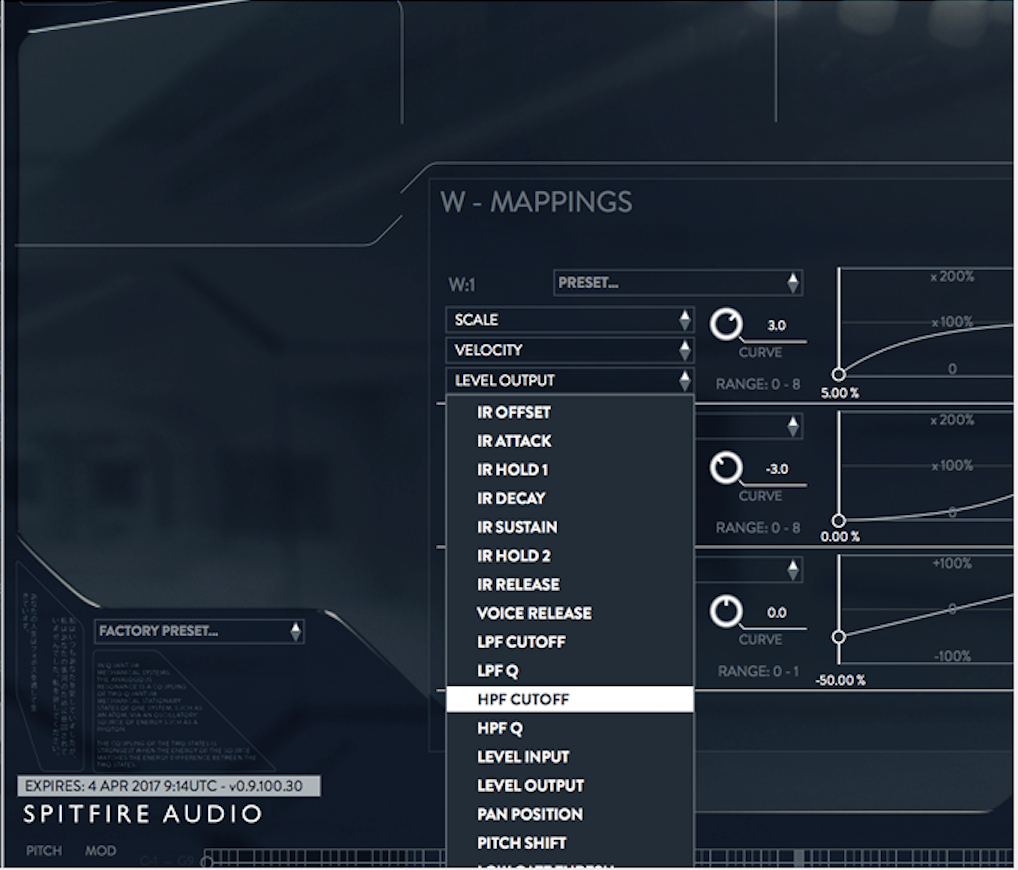 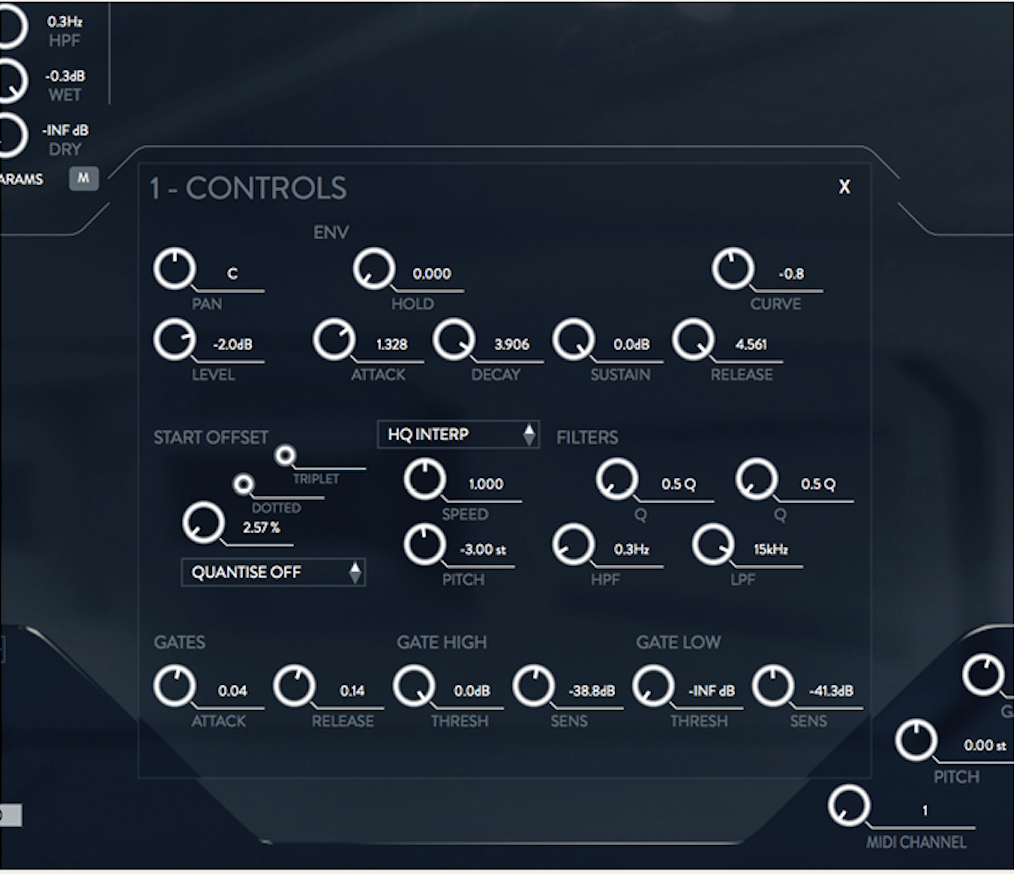 5. Hit the Sound Source number or Convolver letter for a set of more general sound-parameter options. 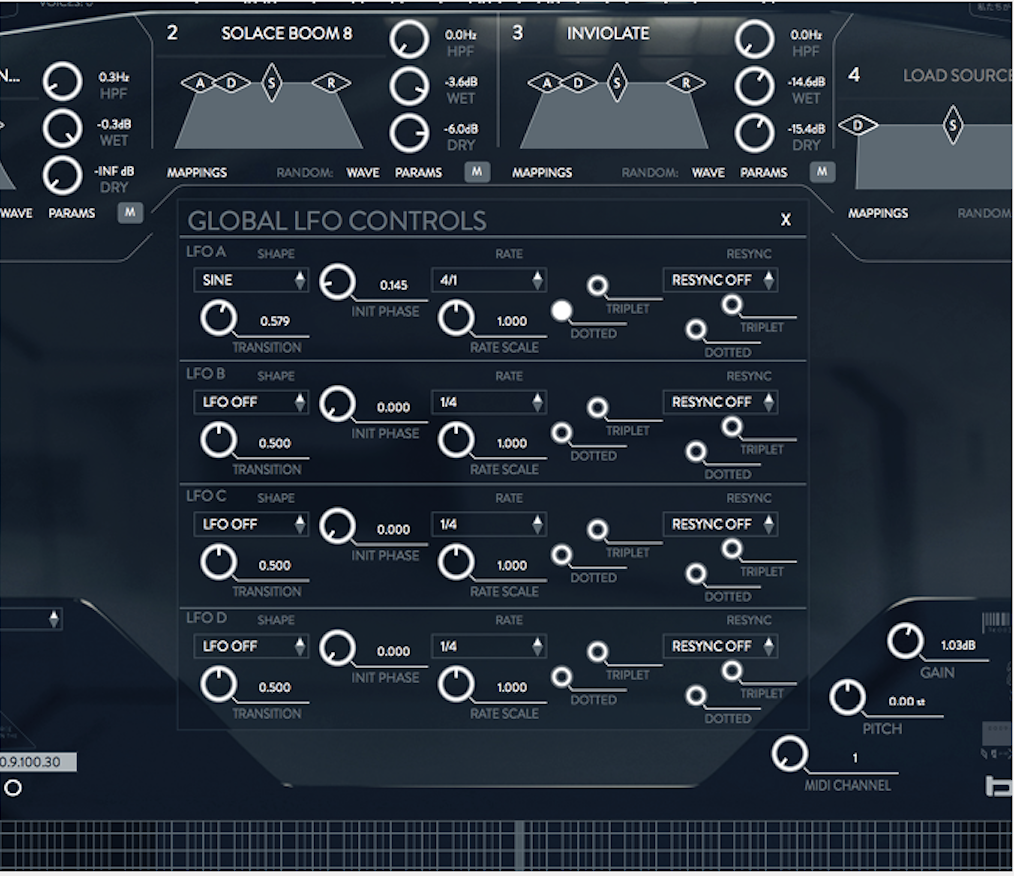 6. The Global LFO section enables you to control main parameters for the four main LFOs.

And I guess that ‘upgrade’ concept just about sums BT Phobos up. It does remind me a little of what those synths were trying to do 20 years ago with their attempts at complex pad sounds, but because of the extra grunt afforded by today’s computers and the clever Polyconvolution engine, these sounds are so much bigger, wider and more progressive in BT Phobos.

Phobos won’t suit everyone, but it will appeal to a lot more than ‘just’ composers of sci-fi-orientated music. As I said right at the start, I’ve included it subtly and not so subtly on a lot of old ideas and it has lifted each and every one of them on to new levels. The big atmspheres definitely have a space in space, but the little nuances and experimental aspects of the software mean it could – and should – be applied everywhere and anywhere. It is, then, truly ‘a golden land of opportunity and adventure’, which is a quote from a film that BT Phobos could have soundtracked. I’ll give you 10 points for the right answer, and a very close 10 for BT Phobos.

BT Phobos might be alone in the Polyconvolution world, but it’s not alone in producing futuristic sounds. There are plenty of big-sounding libraries out there, from the likes of Output, with Movement being a particular favourite at $139. I’ve also looked at Gravity by Heavyocity, which is a great instrument – although rather more expensive at $449. At just £59.95, Dronar (via www.timespace.com) is a great way to get into odd and big drones and sweeps with a more modular approach. Finally, there’s Wide Blue Sound’s Orbit ($150 www.widebluesound.com), which has some great sounds. Hardware-wise, you’ll be hard pushed to come up with anything quite as complex and evolving, although we’re willing to bet our modular expert Dave Gale’s Eurorack collection could come close. 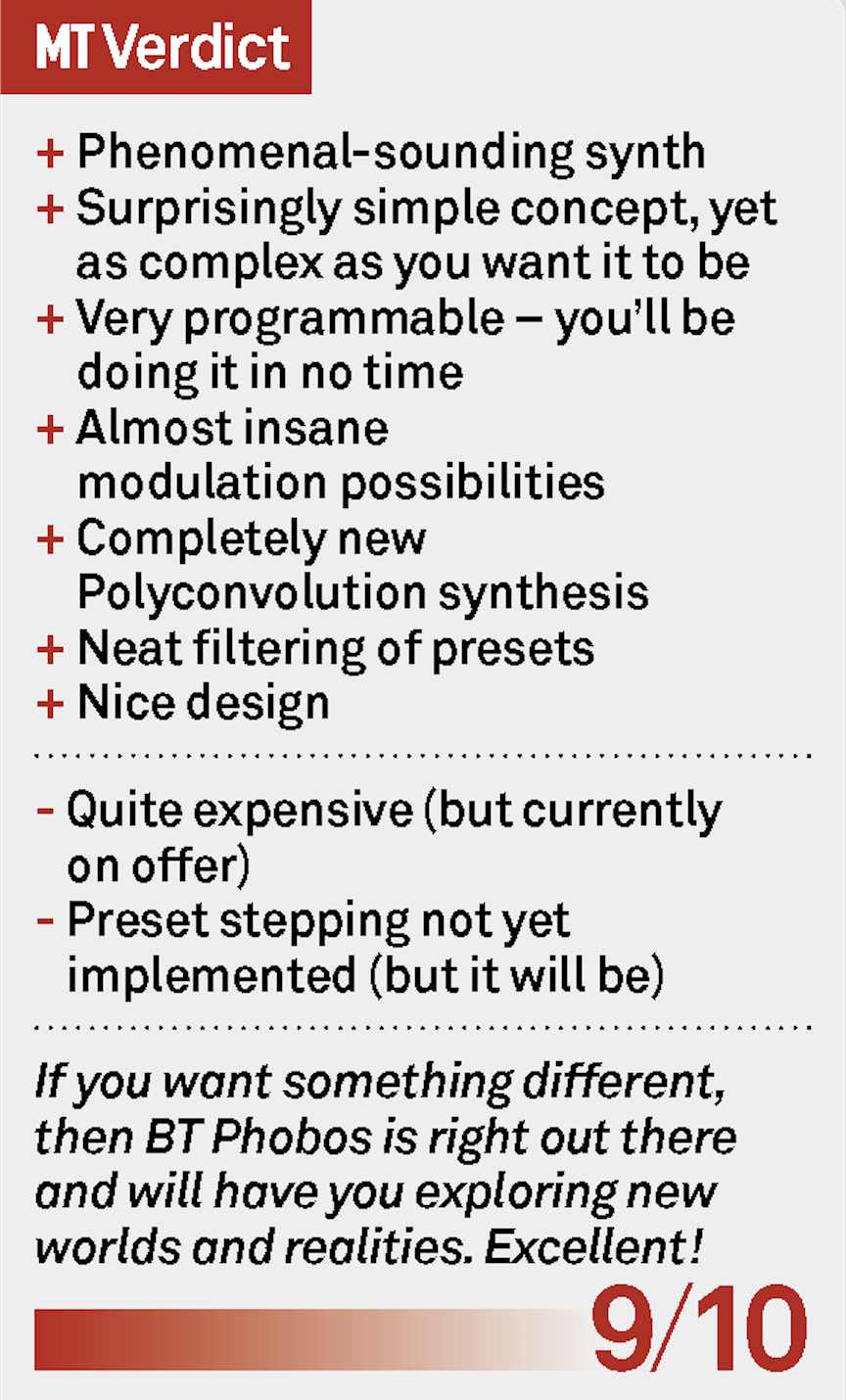