With this latest offering from Spitfire Audio, there’s more than a homage to one of the most influential film composers of all time. Dave Gale is the man who knows too much… Details Kit Bernard Herrmann Composer Toolkit Manufacturer Spitfire Audio Price £429 Web www.spitfireaudio.com Forever looking for new spins on sample libraries for scoring, […]

With this latest offering from Spitfire Audio, there’s more than a homage to one of the most influential film composers of all time. Dave Gale is the man who knows too much… 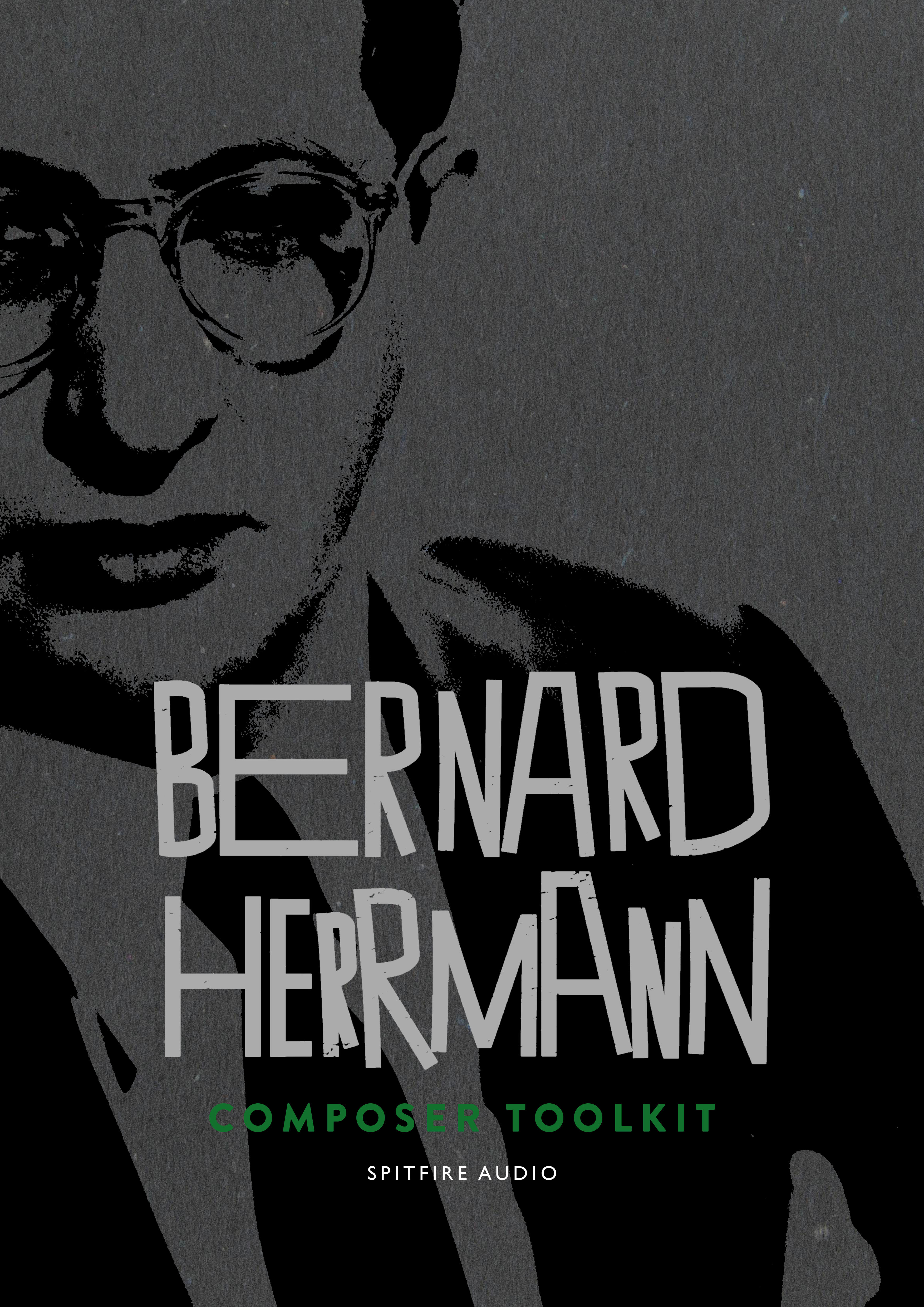 Forever looking for new spins on sample libraries for scoring, Spitfire has worked closely with the estate of US composer Bernard Herrmann to not only deliver something that bears his name, but sounds in the same ballpark as his celebrated work.

Bernard Herrmann has sealed a place in history as one of the all-time great Hollywood film composers. Born in 1911, his most notable work was with British director, Alfred Hitchcock, with Herrmann providing the musical backdrop for many of Hitchcock’s infamous movies – most notably Psycho, Vertigo and North By Northwest. His extraordinary understanding of the orchestral medium was augmented with great use of early music technologies, using the Ondes Martenot, Theremin and early Moog synthesisers.

He acted as sound consultant on Hitchock’s The Birds, where electronic sounds were used in the absence of any traditional score, but his legacy extends beyond the Hitchcock years, as he also worked with legendary animator Ray Harryhausen on fantasy epics; on Taxi Driver and the original version of The Day The Earth Stood Still.

Upon his death in 1975, he left an extraordinarily influential body of work, which is much admired and reflected upon today, and it is this legacy that has given rise to this great library from Spitfire Audio.

In common with other Spitfire libraries, such as the Albion Series, most instruments are grouped. But there is a welcome breakout from these confines, in certain areas. The biggest and boldest patch, Studio Orchestra,throws open a subtle palette which is very worthy of the name. Sounding drier in reverberation when compared to other Spitfire libraries (more akin to a scoring stage), there’s a delicious warmth and personality here which is perfect for more intimate scoring.

As one would expect, with a more global patch such as this, we’re largely restricted to long sustains and accented staccatos unless we veer into the world of full orchestral effects, where a beautiful palette awaits. There are extensive chordal swells, beautifully voiced, with differing chord types scattered up and down the keyboard.

You could get very lazy here! Being a full studio orchestra, crescendoing with an immediate diminuendo, it sounds stunning, and there is a temptation to just lay together a bunch of great chords to create a backdrop for a theme. But there is far more to explore, even just in this patch, with all manner of clattering effects and rising and falling cascades. You can hear Vertigo here immediately.

Moving on to the individual sections, the strings certainly offer the widest range of choices, but are reminiscent of the Albion-style groupings. We have High and Low string ensembles, offering the usual array of great articulations, but we also have High Strings in octaves, and also an option for a more modest ‘half section’ patch.

The former offers beautiful legato patching, alongside other useful fare, such as tremolo and trills, but possibly due to the octave-based nature of the split, the usually good staccatos don’t sound so convincing. However, this is the only weakness in this octave-based pack; chances are, you wouldn’t want the repetition of staccato-based octaves anyway, with more convincing options in other patches.

In the lower strings, we start to see the Herrmann inspiration shining through, as we’re offered classic Herrmann instrument groups, such as lower strings with horns or trombones. This works terrifically well, but will be very dependent upon register. The lower pitches work excellently, with a sense of Michel Legrand; but the higher you go, the basses start to strain a little, which is hardly surprising.

Moving to the winds and there’s a similarly eclectic sense of grouping. Flutes and piccolos are very well represented, with more octave-based and mixed patches. Again, the octave legatos are really excellent, as is the fantastic selection of one-strike effects. These include more beautiful chordal clusters and all manner of rips and falls. Less reassuring are the shorts, which feel very late to speak and less convincing as a result, possibly due to the subtlety of the timbral makeup.

Even more groupings follow, with flutes with clarinets, cor anglais with trumpet, cor anglais with clarinet and trumpet. These musical timbres are really very effective, but you are of course limited by the operation of the grouping, rather than the individual instrument, but I think that missing this point rather negates the whole purpose of the library. Herrmann was the absolute master of cheeky orchestration, and the subtlety you find here, with the timbral combinations, is wonderful, as well as brave.

In the brass department, we’re offered horns, mid brass and trombones. The horns are really excellent, with a sonority I’ve not heard before. Slightly understated, the Clusters patch is reminiscent of Alexander Courage and the superb use of clusters/triads from the original series of Star Trek; but in the Spitfire context, we don’t get any handstopping.

Further groupings entice us, with trombones paired with timpani, and the hilarious trumpet and xylophone collaboration. I was a little disappointed with the latter! In this context, the trumpet sounds rather phoney, which is not something I would have expected from Spitfire, being one of the few sample companies who have really cracked brass in the past. 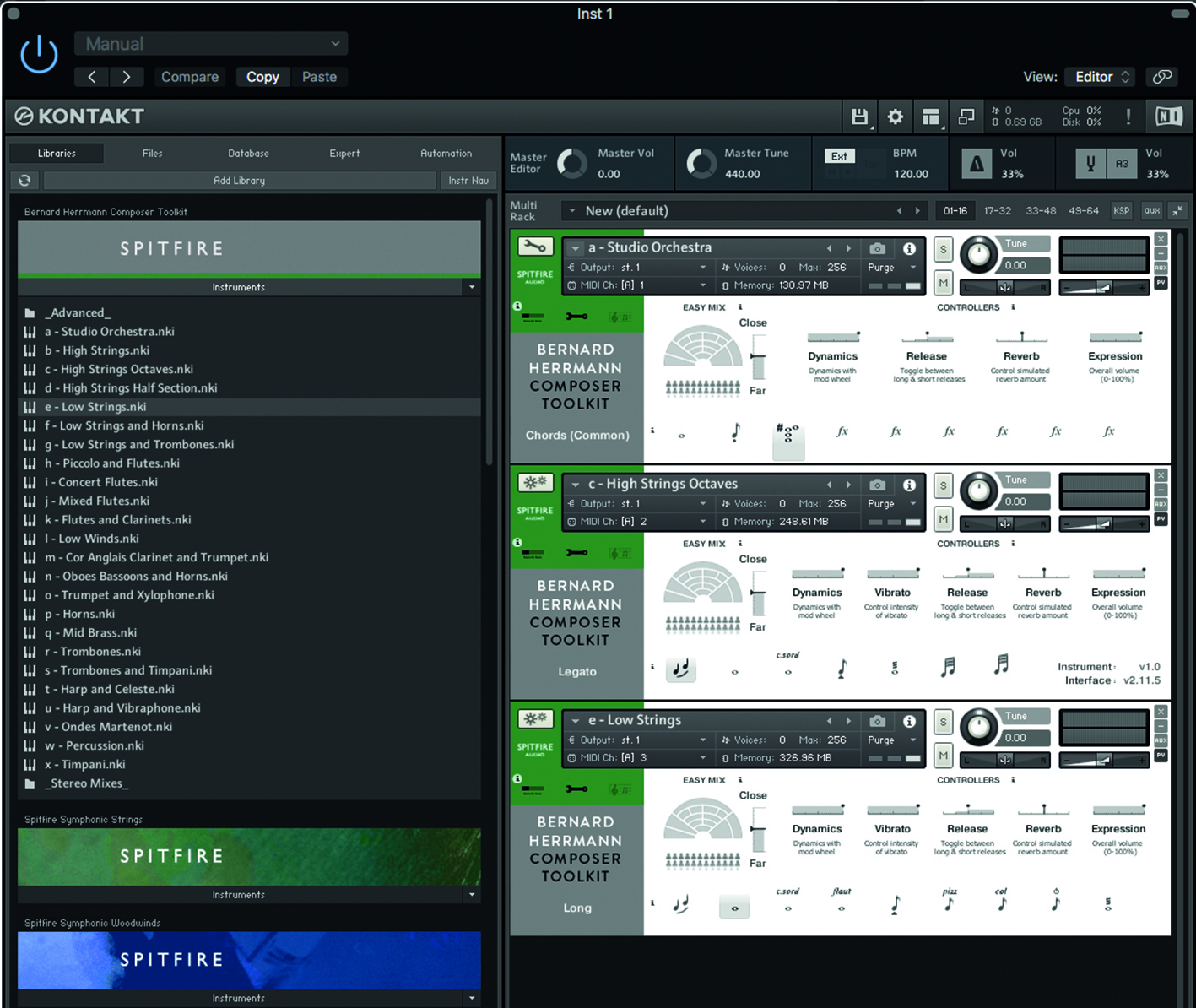 All comp’d up in a package, the varying string sections, each with their own distinctive flavour. 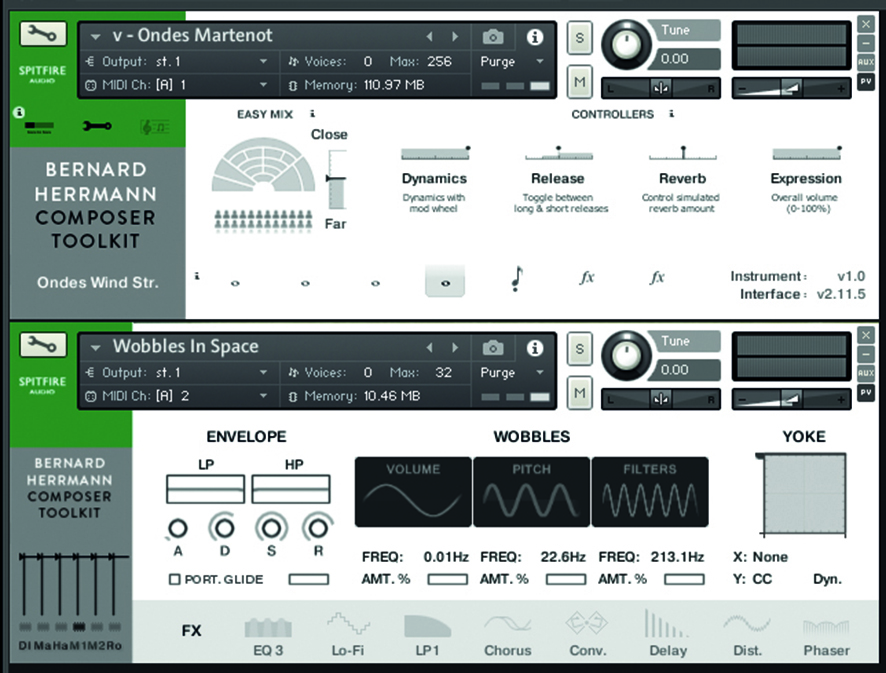 Bernard was not just about the orchestra, as the additions of Ondes Martenot and numerous synth patches clearly demonstrate.

The main percussion patch throws open a real mixed bag of woods and metals being struck, while there are some great treats in the tuned areas – a favourite being the harp and vibraphone patch, typifying that otherworldly mood which Herrmann would often convey.

But this library is not just about orchestral concepts. It’s also Herrmann’s love of electronic voicing, and nowhere is that more obvious than with the extensive sampling of the Ondes Martenot. With a choice of several resonator and timbral types, the Martenot can be both understated and abrasive, with a beautiful ethereal quality, thanks to the use of both metallic and sympathetic string resonators. There are some included effects patches, too, along with a very useful and loud tutti/short stop, which I can envisage punctuating loud melodic lines with great success.

Alongside this electronic odyssey lies a collection of Herrmann-influenced synth patches, which are both colourful and usable, albeit not surprisingly dated-sounding. This might not be your go-to destination for synth sounds in a more generic sense, but it is an important nod to the legacy that Herrmann left us.

With the beautiful credentials of such a Hollywood great, this is a very stylised library, which is going to lend itself really well to more intimate scoring and, thanks to some of the colouring and effects patches, will also work very well in more angsty and horror-based settings. The large number of groupings could make it rather restricting, but I believe that this must be considered an intrinsic part of the tonal palette, so should be wholeheartedly embraced.

There’s a great breadth of tonal colour which I believe will interest all composers, and any soundtrack composer worth their salt will gravitate towards this library. However, it does have a certain sonic datestamp, which might not suit all, as charming as it is.

This is yet another Spitfire library that sits on its own: hardly surprising, when you consider the concept and what it sets out to do. If you want something more mainstream, the other Spitfire Albion libraries will offer plenty of choice, as will the Orchestral Tools libraries, with the new Berlin Orchestra Inspire library being a great first purchase.

There are some elements within this library which are highly usable, with particular mention going to the strings, wind and percussion combinations, along with the eerily beautiful Ondes Martenot. So perhaps consider this less a self-standing affair, and more as something that will be a great fit alongside other sturdy libraries.