The latest Soundcraft mixer and interface is packed with enough features to please both gigging musicians and studio geeks, says Andy Jones… 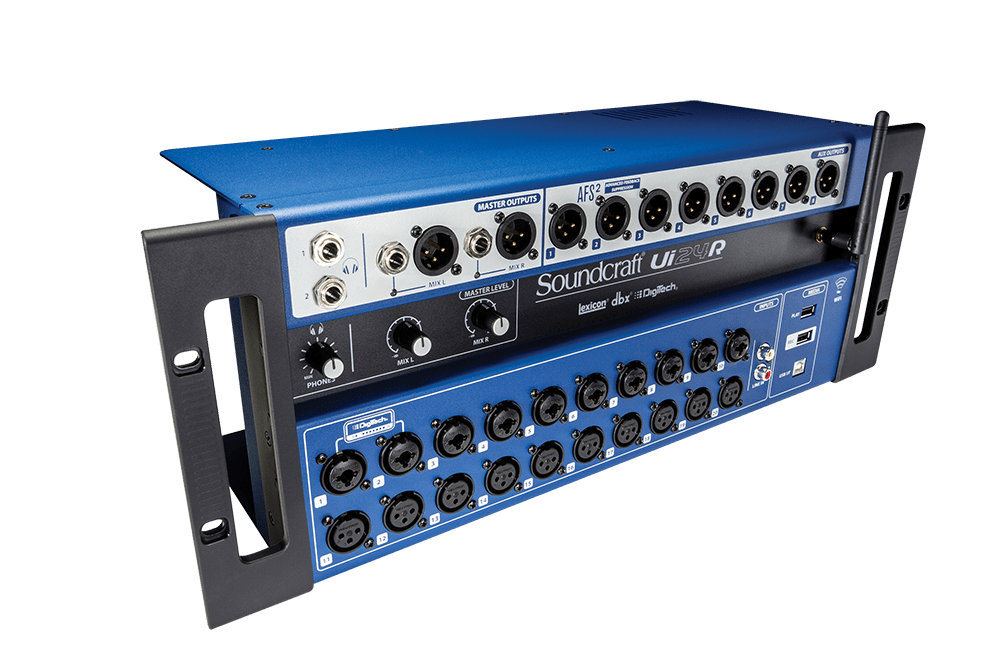 I recently wrote an Essential Guide to interfaces, which I thought would be a doddle to do, but it exploded into one of the most diverse and challenging pieces I’d ever written. That’s because the humble interface has had to diversify to meet every kind of producers’ needs. Now, you can get everything from the Korg plugKEY that lets you plug your iOS device into your studio, right up to something like the A&H Qu-24, an interface with a massive 24-track mixer bolted onto it.

The very definition can be blurred, then. Mixers can be interfaces, interfaces can be mixers. Then along comes Soundcraft with this, the Ui24R, and throws a multi-track recorder into the mix (er and interface).

I first looked at the Ui concept a while ago now with the Ui16, but this is a very grown-up version. Nonetheless, it shares many of the features of its younger brother, and the overall concept, which is the clever bit. A 24-input mixer – which this is (as well as an interface – I’ll stop saying that now) – would normally have a very large footprint.

It would take a lot of your studio space, the connections would be around the back, and it would be a pain to take on the road with you if you’re a gigging musician. The Ui design is all about bringing the connectivity part around the front, moving the mixing control into software and housing it in a compact (4U) and rugged, rackmountable box you can take anywhere.

So far so cool, but it gets even better. The box itself acts like a Wi-Fi router and you can connect up to 10 devices to it – Mac, PC, Linux, iOS and Android – to control it. Think about that: your band, with engineer all connected up to one central mixer/interface, able to control their levels. It could be chaos, but very clever chaos!

To add some extra polish to an already ingenious concept, the box is made by Soundcraft, part of the huge Harman group, and you get other bits from other Harman companies within it: Studer preamps, DigiTech guitar-amp modelling, Lexicon effects and dbx compression are four examples. The final gloss could be that it purports to be simple to set up and use, which I’ll come to, but I’m also happy with that street price – just £869 for all of the above – a kind of ‘best of’ box of Harman chocolates. Time to lift the lid…

The Ui24R is solid, not too heavy and readily rack-mountable. It has 10 combo 14-inch TRS/XLR inputs (the first two of which are Hi-Z guitar inputs which route through that DigiTech modelling) plus a further 10 XLR ins. There are two RCA line ins and a pair of digital ins. On the top of the panel you get two headphone sockets, two sets of master outs and eight aux outs.

Powering up the unit, it’s automatically picked up by Logic as an input/output device, but I didn’t hear anything initially, as you have to follow a simple process to get the control software up and running. This involves selecting the Ui24R as a Wi-Fi server, inputting a one-off password (from the manual) and going to web address ui-mixer.io within whatever browser your device uses. (The download instructions say the address is ui.io, which didn’t seem to work.) We used Safari on an iPad and it worked perfectly. Suddenly, you’re controlling the Ui24R from your iPad within Safari.

The software has several screens, which seem to suit the iPad slightly better than desktop – it’s clearly designed with touch operation in mind and works very well in this regard. There are also loads (and I mean loads) of extra Touch and Gesture controls (double, hold and so on) detailed in the manual to access submenus and shortcuts. All great, but you can do everything easily on the top level as it is.

First up, there’s a very cool Meters screen which shows signal levels on all connections and sends. The Main Mix screen is all of your faders set out as 20 inputs (swipe-able, as you can only see seven at a time on an iPad). You can also show the four effect returns, sub groups, or the eight Aux masters.

Next is the Edit page, and this is where the sonic magic happens. The first two channels have DigiTech amp modelling on as an available tab to access and you can step through several presets for an overall guitar sound, amp or cabinet, all of them excellent – loads to keep guitarists entertained here, but remember that all of the action takes place on the first two channels only. The next tab is the EQ, offering parametric points to drag around with some huge dramatic sonic possibilities literally at your fingertips.

Yet my favourite area – and jumping straight over the Gate and Compressor tabs to get to it – is the FX Sends tab. Here, you get four effects to play with per channel: two Lexicon reverbs, one delay and one room reverb, and easy level controls to manage both the mix level and up to five other parameters (reverb time, bass, feedback and so on) per effect.

It’s so easy to pile on effects here and perfect for the touch iOS environment that I tested it with. You can get lost for hours with the dreamy reverbs. This, combined with those DigiTech amp sims, really does separate this interface and mixer from the rest.

Finally, within the Edit screen set, there are Aux send levels so you can incorporate other outboard into the Ui, making it very much the heart of the studio. There’s also a Patching tab which has all of your routing needs (and why I couldn’t hear anything at first, because it’s here you select your DAW input options via a USB button).

There are two main Aux Send and FX Send buttons on the main screen that allow easier and quicker access to those. The Play icon is the media tab, where you can use the Ui as a media player or recorder. You’ll need a USB card for either, one with music files to playlist or enough space to record to.

For the latter, you can define the number of tracks that are live within your recording. Again, it’s easy to see what’s what here and make gig recordings in 16- or 24-bit quality. The last main icon is a Global tab that gives you access to network functions, overall patching, global settings and allows you to save and load different snapshots of your setup.

This is a difficult question. The chances are that you already own one of the three main ingredients that make up the Ui24R – interface, recorder or mixer. If you’re looking to upgrade your I/O numbers or downsize your studio space, then this is a great option. It’s also a fantastic choice if you’re considering taking your studio creations out on the road, as it’s so robust and self contained.

As with the Ui16 that I looked at, the Ui24R is a wonderful piece of technology that has uses in both the studio and on tour, although it almost certainly has more leanings in the latter direction. The addition of the media player and recorder could be great for not only recording a band’s set, but for playing music between sets – a simple use, but it’s there nonetheless.

In the studio, it’s quite simply a great multi-channel interface and mixer that can act as the front end to your DAW. You might not necessarily make much use of the recorder or iPad control in this scenario, though. You’d likely end up using the desktop version of the control software with your DAW – a shame, as it’s definitely best in the touch environment and has tons of gesture options and shortcuts.

Even if you ‘only’ use it in the studio, you’re still getting great effects, connectivity and lots of routing flexibility, but gigging musicians will be enjoying more benefits and for them, the Ui24R – at that street price – is almost a no-brainer. 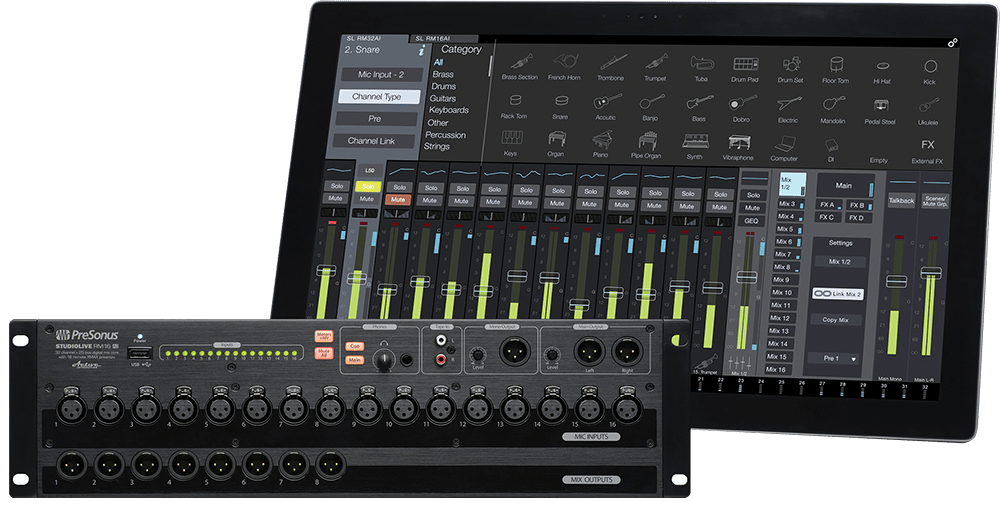 This is similar in concept to the Ui series. There are two main models, one 16 channel and one 32. You can control them by the same mobile and desktop options and they also include PreSonus’ great Fat Channel.

The QU series of mixers from A&H have long been MusicTech favourites and this is the rackmount version. Again, the concept is similar – all the connecting is done in hardware, the mixing in software – and there’s a USB recorder onboard.