Small-format mixers are now big business for podcasters and acoustic singer-songwriters. Go up in channel count, though, and you can start incorporating more of your analogue world into your digital. Andy Jones checks out the new Signature 12, which also doubles as a multi-channel USB interface…   Details Price Signature 12MTK £329 street; £269 street for […] 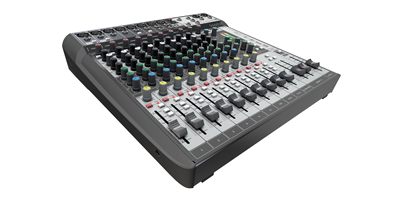 Small-format mixers are now big business for podcasters and acoustic singer-songwriters. Go up in channel count, though, and you can start incorporating more of your analogue world into your digital. Andy Jones checks out the new Signature 12, which also doubles as a multi-channel USB interface… 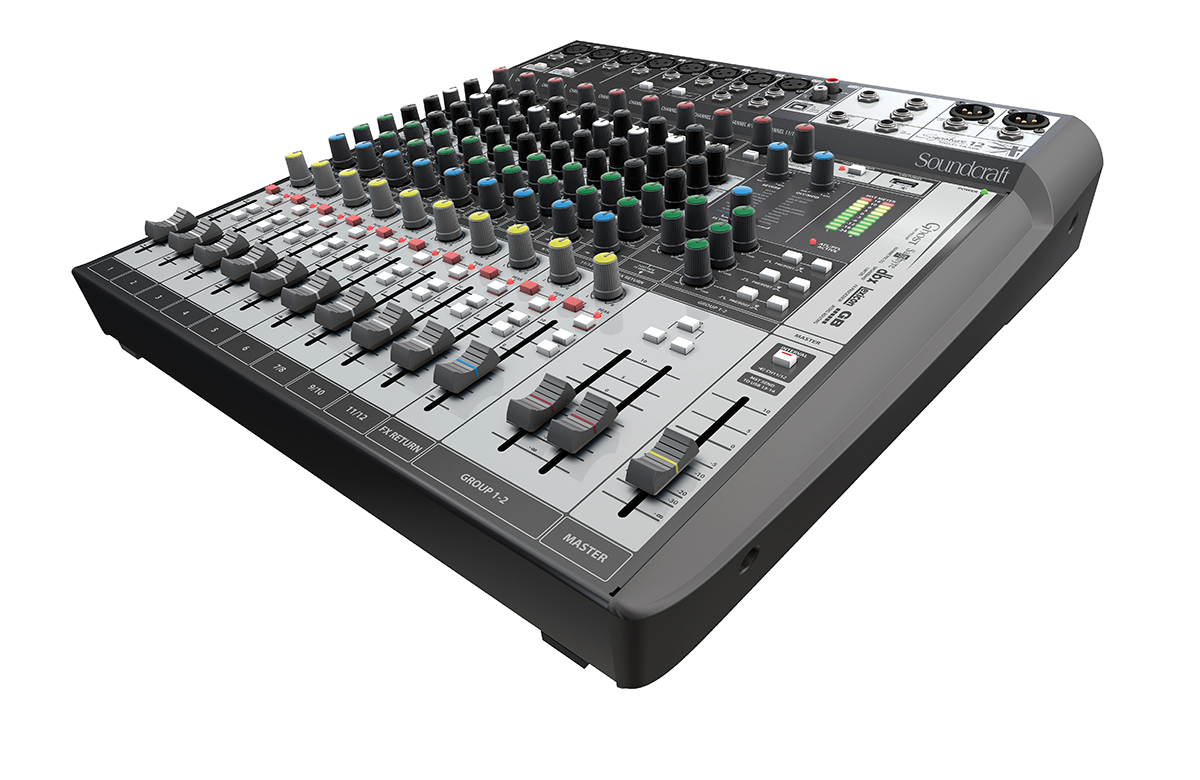 We’ve seen a resurgence in the use of analogue mixers over recent years here at MusicTech. The reasons for this are many and varied, and not all part of the huge retro revival that has also been happening in the world of music production.

The most obvious reason for the need for analogue mixing is the big demand for one or two high- quality pieces of outboard gear in the signal chain. Then there’s the increased popularity of analogue synths; not least the Eurorack/modular synth format. There’s also the ongoing popularity of live playing and the relatively new phenomena of podcasting and video blogging. The latter two have meant that small mixers in particular have become very popular again – indeed, I’ve recently looked at great models by Mackie, Yamaha and Allen & Heath.

Now it’s the turn of a slightly larger format mixer: the Soundcraft Signature 12. It’s analogue, but analogue for the 21st century, meaning that onboard effects are standard, as is USB interfacing. It should be able to handle any or all of the above mixing situations, but as the proud owner of a new Eurorack synth system, I can’t help but think it may be an ideal solution to bring that setup into my DAW world. Let’s see how it stacks up…

The Range
First up, we should familiarise ourselves with what’s in the Signature range. There are essentially six models within it, including a couple of variants. Four ‘standard’ models are categorised by input channels: 10, 12, 16 and 22. Each has ‘iconic’ Soundcraft Ghost preamps, Lexicon effects, British EQ  (essentially, it’s a more characterful and coloured sound), and a two-in/two-out USB interface.

The two variations on these are the 12MTK and 22MTK, which increase USB inputs and outputs to 14-in/12-out and 24-in/ 22-out respectively (MTK = multitrack). We have both the 12 and 12MTK on test and the difference in price between them is around £60 (street).

The Specs
Feature-wise, I’m perhaps not surprisingly reminded of the rather great Soundcraft Ui-16 mixer I tested a few months back, an interface-based live mixer which did much of its cool stuff in software. Like that mixer, the Signature range comes packed with Harman-branded goodies. Those Lexicon effects include reverbs, delays and modulation – very useful, especially for the live mixer – and there’s dbx limiting on channels 1 and 2, a not very subtle but welcome feature. 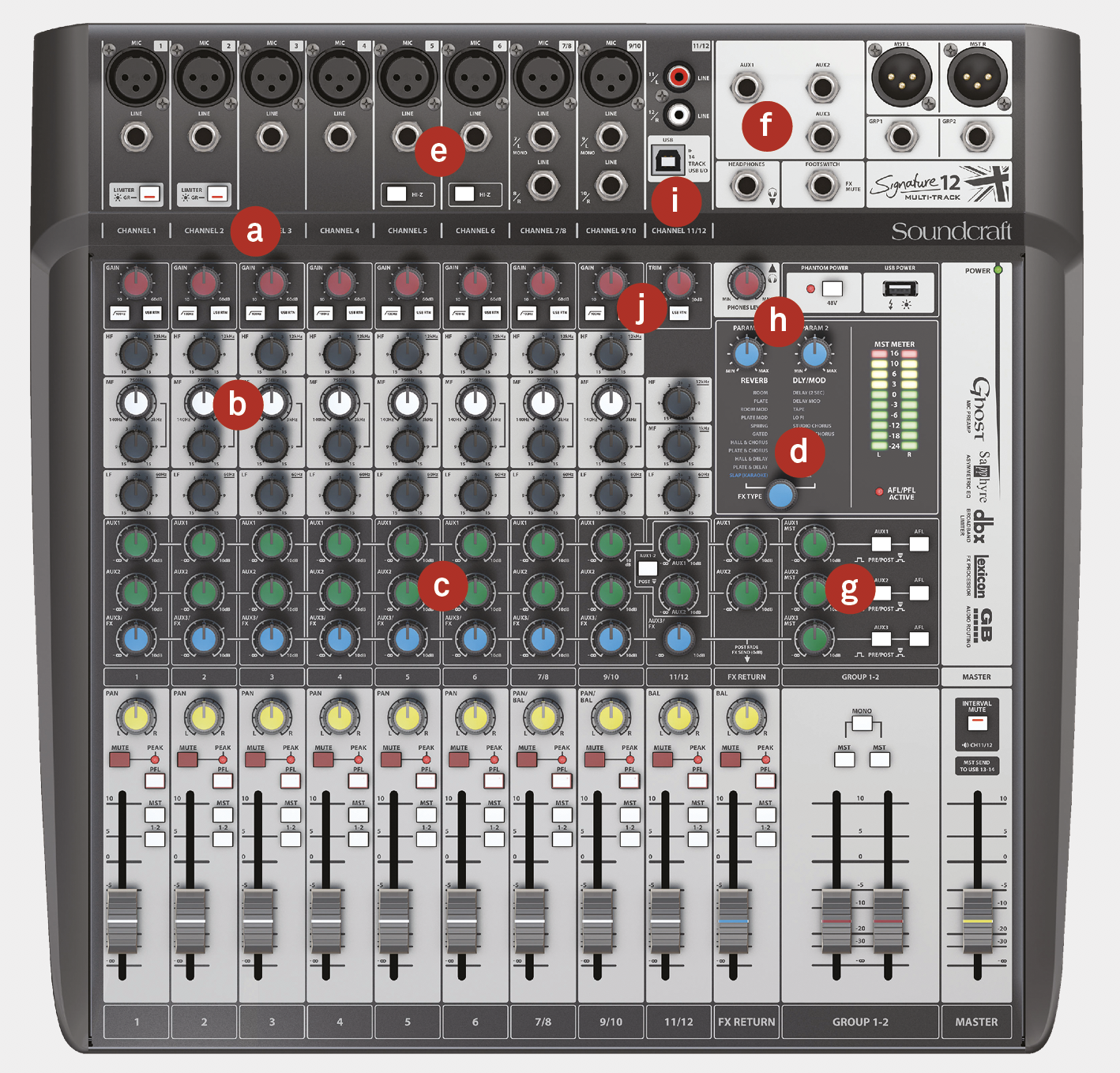 a: Inputs – Analogue and switchable USB with Ghost preamps and hi-pass filters.

b: EQ – 3-Band EQ is included with sweepable mids, and offers the ‘British’ EQ sound.

d: Lexicon Effects – These include 10 reverb and 10 delay/modulation effects, each with two parameter dials.

e: Switchable Hi-Z Inputs – These allow instruments such as guitars and basses to be plugged straight in.

g: Routing – Easy Aux routing, with buttons for pre and post and dials or levels.

h: Effects Part 2 – Each effect allows access to two common parameters that can be adjusted here.

i: USB Socket – On the MTK model (as shown) this acts as a return or insert for all i/p channels.

j: USB return (MTK) – On the MTK model, this breaks the analogue signal path, replacing it with USB audio.

Up and Running
The mixers are built like a tank, so not light in weight, which may be a factor for that live user – at nearly 6kg, you’ll certainly notice each in your backpack – but means they sit on your desktop, unmoving and solid… great in my book. Getting the mixers up and running as an interface couldn’t be easier.

I must admit to finding mixers that work as USB interfaces far more usable and easier to get my head around than interfaces that happen to have extra inputs and other connections for mixing – maybe I’m just a little old school. Sure, a rack interface has its advantages in terms of its physical footprint, but I prefer the hands-on mixing route.

In this instance, the whole experience of marrying the Signature 12 with my DAW was incredibly easy.

I soon had the main outs from my Eurorack plus a couple of other synths married to Ableton Live, with plenty of fun on the horizon for mixing the two worlds together (not to mention taking more mini-jacks out from other parts of my modular into the extra channels on the Signature 12 not currently used). 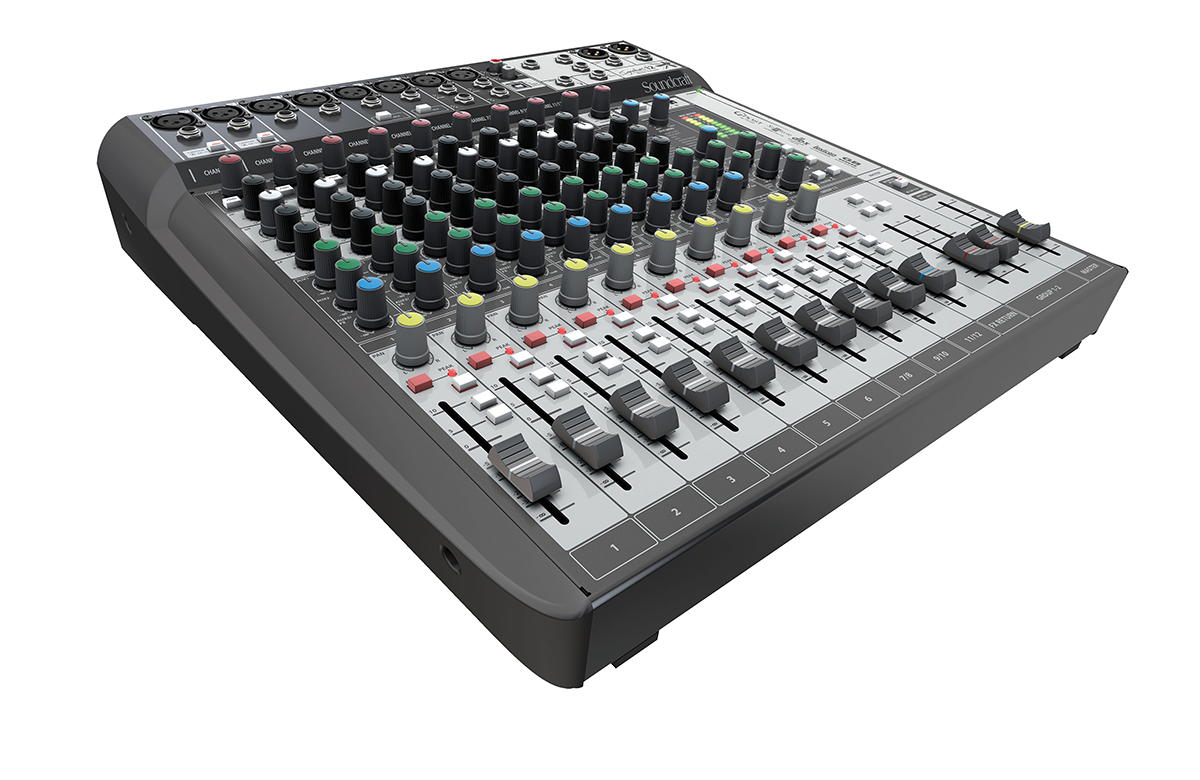 Mention should also be made of the USB v analogue routing – all easily dealt with, particularly on the MTK, with returns per channel for easy switching between summing and interfacing.

The EQ section on the mixer is particularly rounded and smooth. Like the limiter, it’s not that subtle, but can be creative and accurate – you can really hear what you’re doing and the mid sweep is, as ever, a welcome addition. Effects-wise, you get 22 to choose from on Aux 3 (1&2 can be used to, for example, plumb external effects in, or send a monitor mix to stage for live use). You select effects by dialling the FX Type rotary and then pressing it.

Two main parameters are controlled via the Reverb and Dly/Mod rotaries: typically decay and delay times (for reverbs); number of repeats and delay time (for delays); or mod speed and depth (for modulations). The effects themselves are very usable and I was surprised by how clean they sound.

Finally, the Ghost mic pres on eight channels offer what Soundcraft describe as an iconic sound – as they are based on those from the company’s iconic Ghost mixing range. They deliver ultra-low noise: at low levels, I found myself relying on the LEDs to show the mixer was actually on as I could hear so little noise. So using the Signature is one of the tidiest recent experiences I’ve had in analogue-mixer testing. 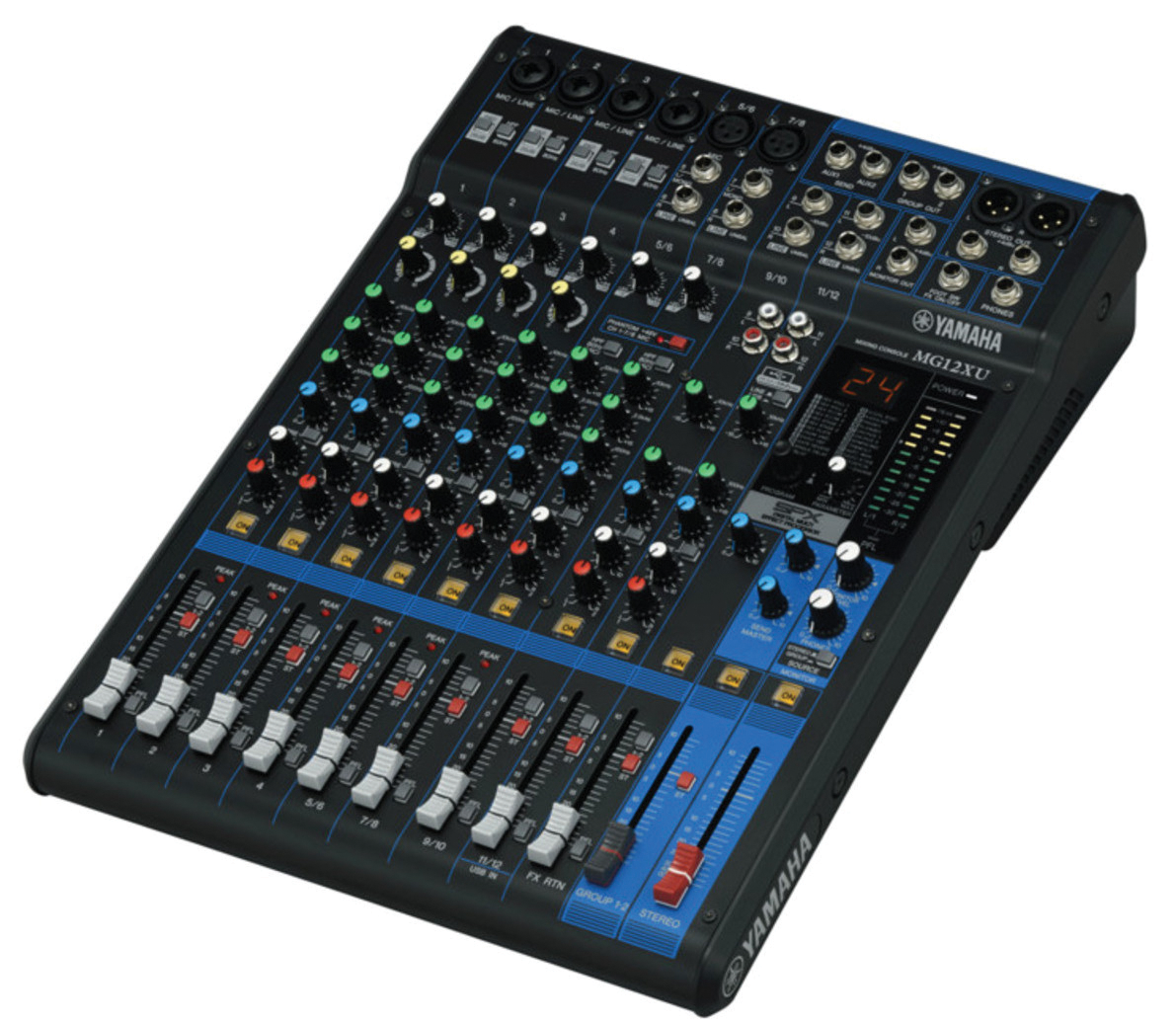 I’ve looked at the AG series from Yamaha which offers USB interfacing but lower channel counts. The MG12XU gets closer to the Signature 12’s spec, though, and streets at just £262. I looked at Allen & Heath’s ZED range last month, again smaller models, but larger ones do exist. The 12FX (£270) ships with effects and USB, but isn’t as fully featured in terms of channels as the 12MTX.

Conclusion
For the money, the Signature 12 and MTK variation are great buys. If you have any kind of analogue setup, they are ideal to get all of that joy linked up to your digital world. In fact, you could easily spend similar on just a mixing Eurorack module and separate USB interface – get one of these for both needs. They are also great live mixers with very clean and usable effects for both stage and studio. Of the two, I’d opt for the MTK, simply for the extra USB multitracking and ability to insert your own plug-ins on input channels. That said, either’s a sound buy. 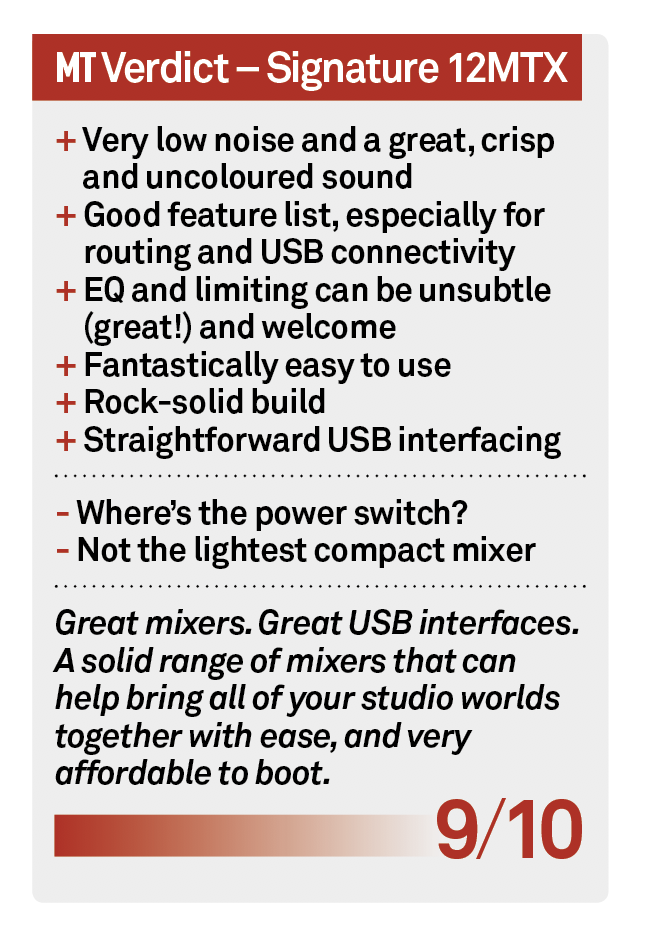