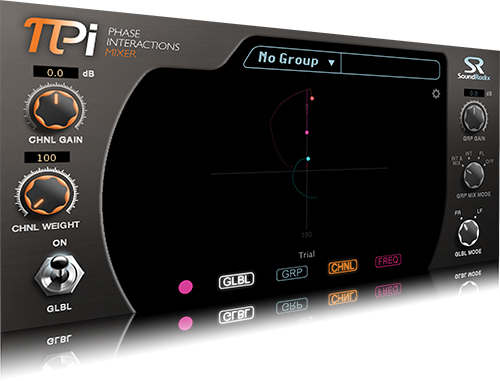 If phase issues are detrimentally affecting your mixes, it might  be time to reach for the Pi. Alex Holmes chews it over in this review of the Sound Radix Pi Phase Interactions Mixer

Sound Radix has made a name for itself with innovative ideas and useful software tools such as the SurferEQ – in which individual EQ bands can be set to follow melodies – and its latest product is no exception. Pi is a multi-channel Phase Interactions Mixer that aims to minimise the frequency-cancellation that can occur between instruments due to phasing issues. If your mix lacks definition in the low end or the drum transients aren’t quite snapping out as they might, it’s possible you may have some phase-cancellation, where the frequencies of layered sounds are battling for attention.

Just a Phase
The system works by placing Pi as the last insert on every channel in your DAW. Each of the instances then speaks to each other and the phase of each track is dynamically rotated as the mix plays out to achieve maximum correlation, the results of which are improved mono-compatibility, greater spatial depth and better-defined transients. You can choose to place channels into one of 64 possible groups, which enables you to match instruments such as a guitar amp and DI or a set of multitracked drums to achieve the best possible relationships within each group. Processing can then be set to either balance phase solely within the group, or within the group and also the rest of the mix. There’s also the option to phase-lock the entire group. Other controls allow you to select whether you optimise relationships across the whole frequency spectrum or just below 800Hz, with additional dials for Channel Gain, Group Gain and Channel Weight (more on these later).

The GUI is well laid-out and easy to use, with the central window giving graphical feedback on the 360-degree phase of each channel, or the different shifts across the frequency spectrum. Although this is handy, we occasionally found it tricky to decipher as things happen quite quickly, and the display seems to change depending on which instances of the plug-in you have open.

Balancing Act
To get the most effective results you ideally want to feed Pi the correctly balanced volumes for each channel in the mix, which is why Sound Radix recommends placing the plug-in post-fader. As this isn’t going to be a viable option in some DAWs, the alternative is to keep your faders at unity gain and use the built-in Channel Gain control to set the levels of your mix. This could prove a pain if you’re planning to use Pi at the start of a mix, but isn’t so much of a problem if you’ve already set most of your levels.

We loaded up several old mixes and instantiated multiple instances of Pi to see what would happen. It’s fair to say it wasn’t exactly the eureka moment we were hoping for, but there was a subtle increase in punch in the tops of the drums and the kick and bass, plus a widening of the 3D image. Usefully, there’s a global on/off switch that affects all copies of the plug-in and enables you to A/B the results.

Users of the first release of Pi reported issues relating to warbling or wobbling pitch on sustained instruments when the software was trying to match one channel to another. The addition of a Channel Weight dial in a subsequent update minimised this by allowing you to assign a channel more importance, thus reducing how much it is affected by the others. In practice we still occasionally found that certain neighbouring instruments simply wouldn’t play nicely with each other, at which point you have to decide whether the increased definition is worth the subtle pitch artefacts.

Piece of the Pi
We achieved the best results when using Pi only on select groups of instruments to aid in separation of layered sounds, especially on both multitrack drum stems and electronic beats. The process of setting up multiple instances combined with the large amount of latency incurred by the plug-in doing its job means that Pi won’t suit everyone’s workflow. The results are often very subtle, but if it can get you that little bit closer to a professional-sounding mix, it’s time well spent. Some purists may argue that phase relationships are a natural part of many recordings and to remove them can result in a sterile mix. However, if you’re after a powerful, modern finish, Pi might get you one step closer.

A unique plug-in that won’t work on all material, but when used carefully can increase the depth and definition of your tracks, giving clearer-sounding results.