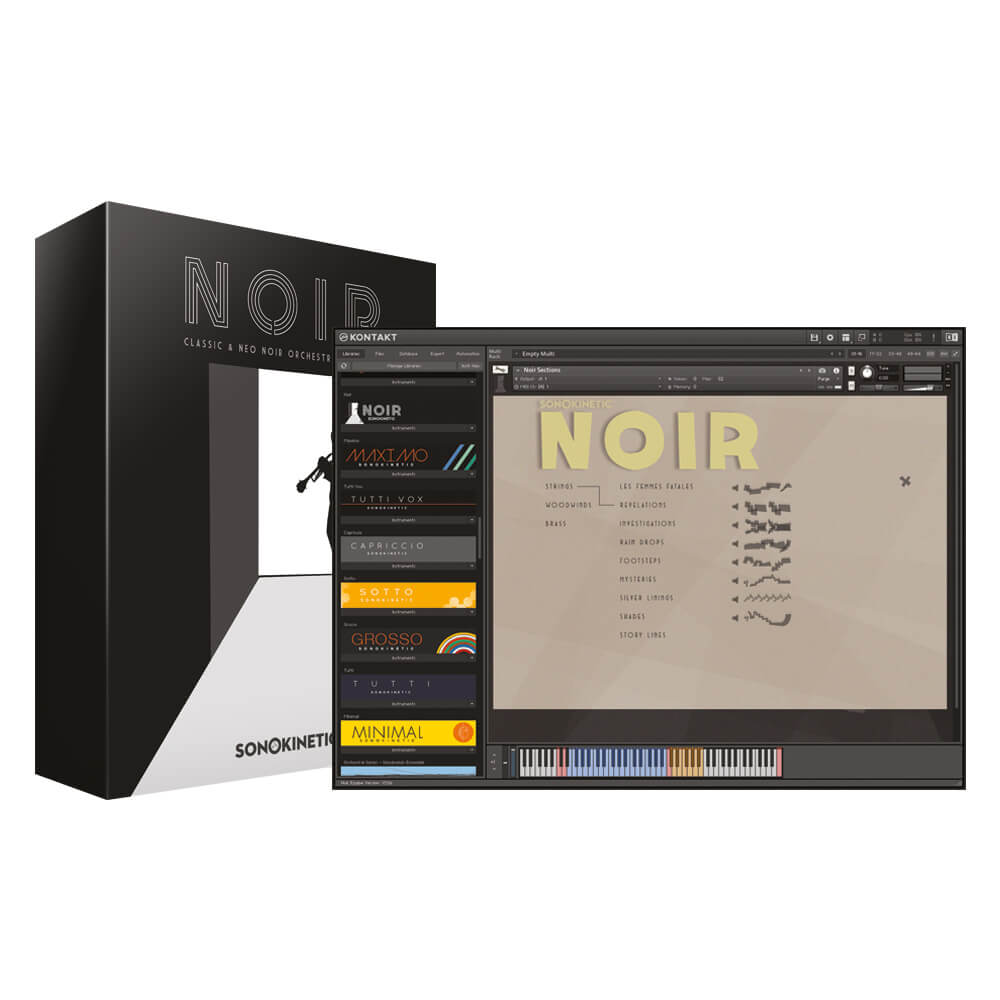 Speaking personally, I’ve always been hugely inspired by the work of the great jazz and cinematic crossover composers of the ’50s and ’60s. Bernard Herrmann and Michel Legrand scored a vast number of films during this period, while another luminary, Gil Evans, became known as one of the great bandleaders and arrangers, working with Miles Davis on a number of seminal classics.

Even now, this tradition is alive and kicking thanks to groups such as the Metropole Orkest, so the arrival of Noir is timely, drawing inspiration from this very field and catering for an area of sample-based scoring which is largely untapped.

Noir is split into two main sections, consisting of Ensemble and Solo phrases, so let’s start by considering the instrumental makeup of this library. Within the ensemble patch, three sections are available, consisting of Strings, Woodwinds and Brass. This resonates with the original scoring concept, where the group could largely be considered a Big Band, consisting of Sax, Trumpet and Trombone sections, with a small chamber orchestra bolted on the side.

The one area which is noticeably absent is drums and percussion, which seems a little odd, given that much of this style of music would have been driven by a jazz drummer, so if this is what you are after, you’ll need to seek drum-based phrases elsewhere. The Solo section offers the user phrases played on a number of associated instruments, notably harmon muted trumpet (à la Miles Davis), saxophone, clarinet and piano.

Exploring the Ensemble section, this is very firmly a Loop-based or phrase library, and as such, complete constructed musical passages are triggered by the press of a key on the keyboard. Noir is designed so that all of the phrases will work together, so you could easily opt for a number of phrases playing simultaneously or build your work by adding phrases as your track develops.

Coming back to the instrumental groupings, each section has the capacity to choose from a bewildering number of loops, all sectioned across nine descriptive menus. ‘Les Femmes Fatales’ and ‘Investigations’ being examples, with names giving a fair flavour of what will follow.

In line with other Sonokinetic libraries, a visual interpretation of the performed phrase gives a basic idea of what will follow, while it is also possible to open up a score or export MIDI, should you want greater detail or the ability to employ other instruments.

The phrases and loops themselves sound very rich sonically, with four mic positions available, including a Decca Tree, which sounds stunningly effective. It’s possible to blend two of these mic positions together, so if you wish to add more closeness, it’s easy to achieve.

One common issue with triggering phrases in libraries such as this, is the crossover that occurs at the end of one sample and beginning of the next. Sonokinetic have looked after this pretty well, with the addition of a X-Fade pot, which will take the heat out of excessively fast release points for a more natural sound.

There are occasions when this works less well, as it can sound unnatural when moving from one chord to another, but with covering fire elsewhere in a track, should not be a huge issue. However, I did find a couple of other small niggles worthy of mention. 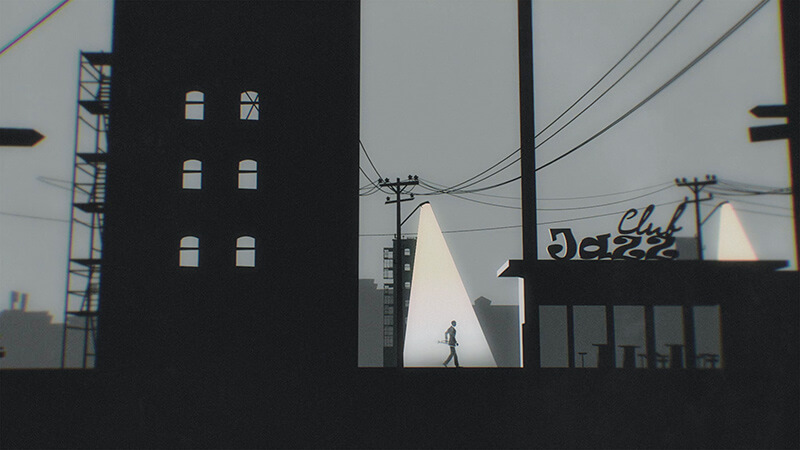 Noir operates by dictating the required chord in the lower left-hand register of your MIDI keyboard, which selects the required chord or harmonic progression, leaving the right-hand to trigger phrases. While this is pretty comprehensive and takes more complex chords into account, sometimes the voicing doesn’t always reflect what you might expect. Minor triads can become the upper four notes of a Major 7th chord, meaning that you will need to employ other instrumentation in order to soak up certain voicings, especially in the bass.

To be fair, you have to expect this sort of thing with a phrase library, as the permutations are just too great, and on the whole, I must point out that Noir reacts pretty well. I was also aware of artefacts creeping into the playback of some loops, presumably caused by the dictation of tempo being too far away from the original recording. Again, this should be considered more a limitation of the technology, rather than of Noir itself.

I also became aware of occasional moments of playing which sounded a little out of tune, at least to my ears, notably in the flutes and trombones. While you should expect a degree of lateral tonal movement, as this is what makes up a human performance, it could become more of a hindrance if the phrase is repeated a number of times, as the same out-of-tune phrase will be reproduced each time, with no round-robin element available.

Despite these minor setbacks, it has to be said that the ensemble part of the library does what it sets out to do very well. There are some lovely moments of phrasing, arrangement and orchestration, some of which are so close to the likes of Gil Evans, you’d think he might have been part of the process.

It’s also possible to offset the start of the sample by 8th notes, while snapping within the bar, which is a useful feature, as is the ability to control volume levels from the modulation wheel, though this is only channel volume and not any form of dynamic, timbral control.

Moving to the solo section, you’ll find a similarly extensive range of soloistic phrases and colours to complement the ensemble section. Some of these feel very obligato in nature, and could be used in a stand-alone setting. The Muted trumpet is a welcome addition, while the pianistic phrases can add a beautiful tail-off to a section, in a single use capacity.

Noir is a very stylised package, harking back to the jazz influenced scoring of past masters, and as such will not be at home if you want something more traditionally classical in construct, but it could be very useful if you are writing cinematically biased music, in which case it could be a source of inspiration for development. 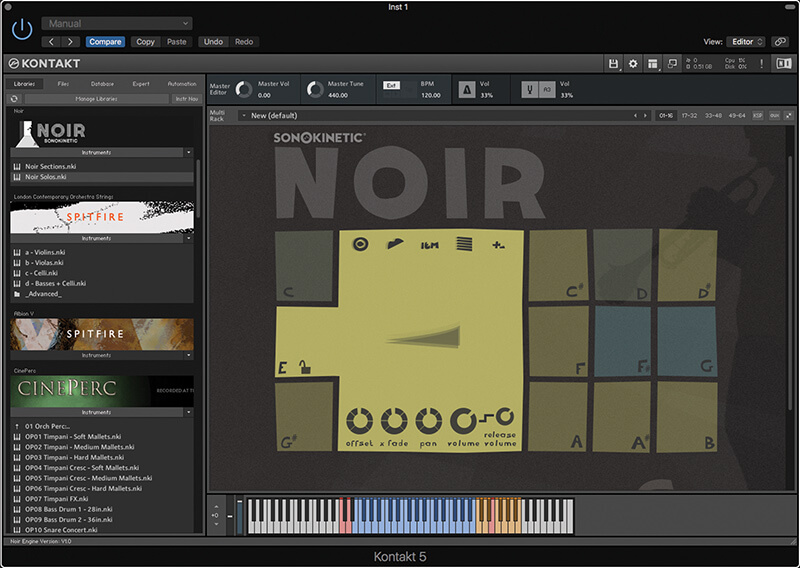 Being loop/phrase based, it’s not as flexible as a library you can score with yourself, and it will arguably come with a limited shelf life, as you exhaust all the phrases in your work, but those phrases sound great and will stand up well on their own, or even better, in context with other instruments.

The overwhelming sense that I get from Noir is that it is very comprehensive. It offers a fantastic palette of colours which are pretty unique and allows the user considerable control thanks to the organisation of sections. I was disappointed not to see the inclusion of a drum element in this library, but while this is lacking, the recording quality of the three included sections is very gratifying indeed.

The strings offer that beautiful lush quality that you would expect, thanks to the complexity of voicing within the genre that you associate with this era, while the brass and winds punctuate incredibly effectively.

Some of the brass swells and stabs could be very useful away from the Noir stylistic construct, while the wind section runs up and down the register with complete ease, adding beautiful cinematically stylised twists and turns. There is something here for all; instantly gratifying results will appeal to the less experienced, while many of the colour based samples could prove indispensable to the established user. The future looks quite Noir… 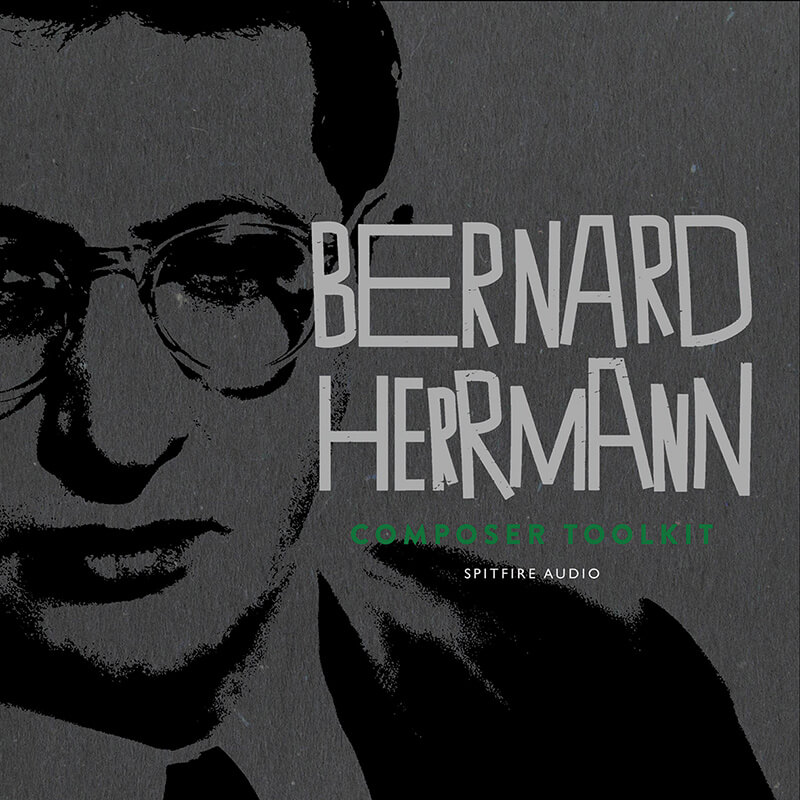 This library of sampled instruments was recorded and produced with an ear to Herrmann’s style and includes orchestral instrumentation and oddities, such as an Ondes Martenot. 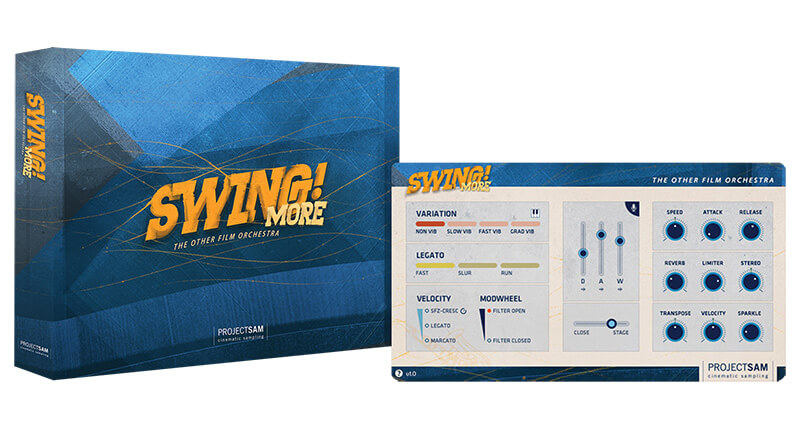 Although lacking in the String and orchestral Woodwind sections, this package offers a Big Band in virtual form, along with extensive rhythm section elements and additional instruments, such as jazz clarinet. Use this in conjunction with other string and wind samples to great effect.