Think ‘bells’ and the prospect could give you a clanging headache, but not with this new suite from Sonokinetic. We chime in with our thoughts. 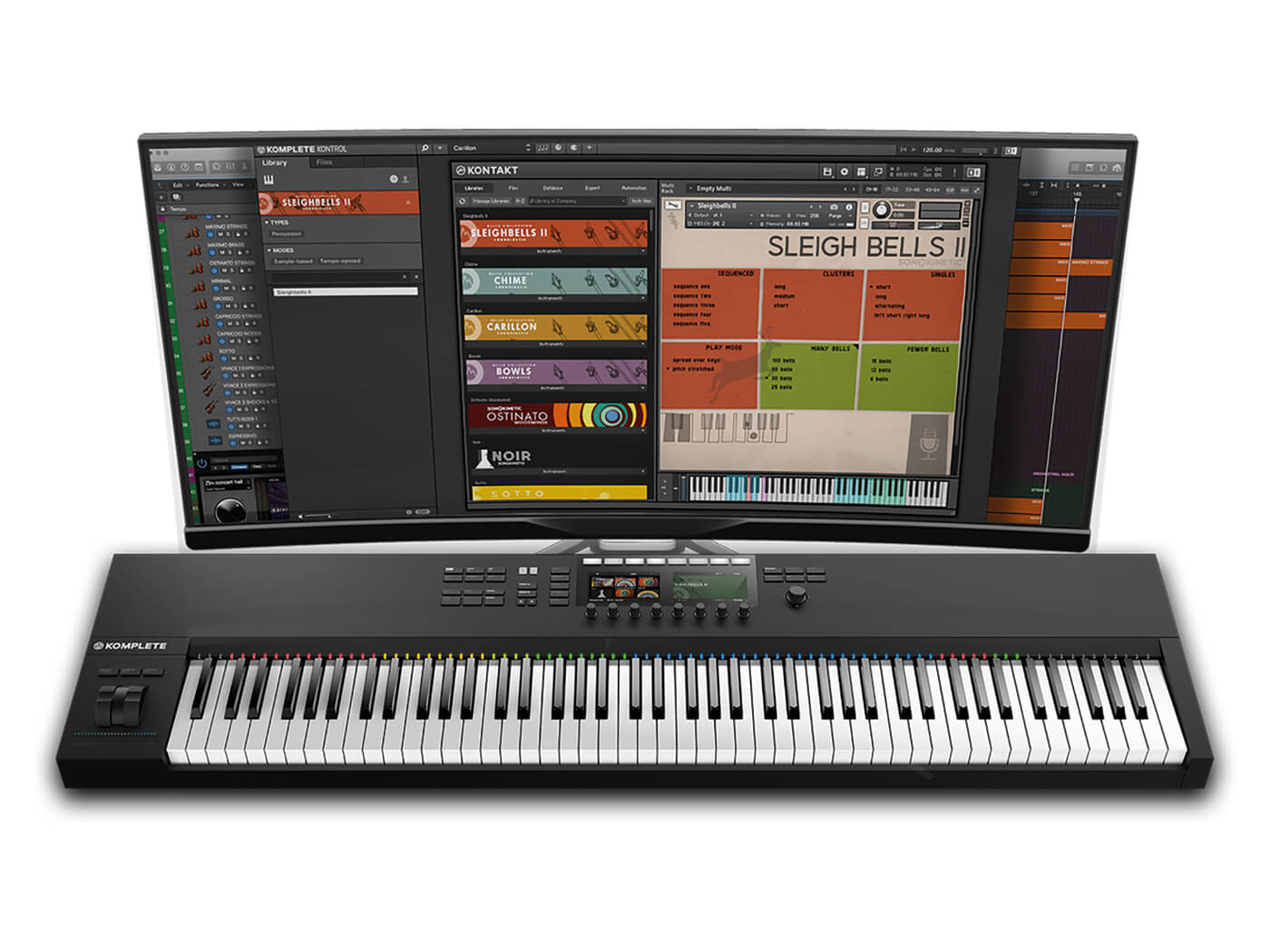 If there’s one class of instrument that comes in all shapes and sizes, bells fits the bill. From the infamous Big Ben (which is actually the name of the colossal bell, and not the clock tower itself), down to the humble sleigh bell, they all have a place – albeit one that might only be used in December.

What Sonokinetic has done is assemble four different bell and chime colours that might be useful in different settings, all available as individual instruments, or as a collection. Like all Sonokinetic libraries, there is a thread running through, meaning that once you understand how one library works, the others will be almost exactly the same except for the odd subtlety or detail.

This collection expands the bell concept in a very musical way, making it appealing on many levels. The keyswitching setup side of the collection is also unified, as is the way all of the instruments have been recorded. Sample capture has been undertaken via Sonokinetic’s new AMS microphone array. The company has standardised the recording of all of the bells using seven mics in an Aligned Microphone Setup, hence the acronym.

A quick visit to the mic setup page, which is found by clicking on the mic icon on each instrument, finds us in mic-recall heaven. It allows for change of level and movement of mics around the stereo field, while the presence of a binaural head adds a further dimension to playback possibilities. This is mightily impressive: so much so, it’s easy to get swayed into this world as much as the actual instrument itself. 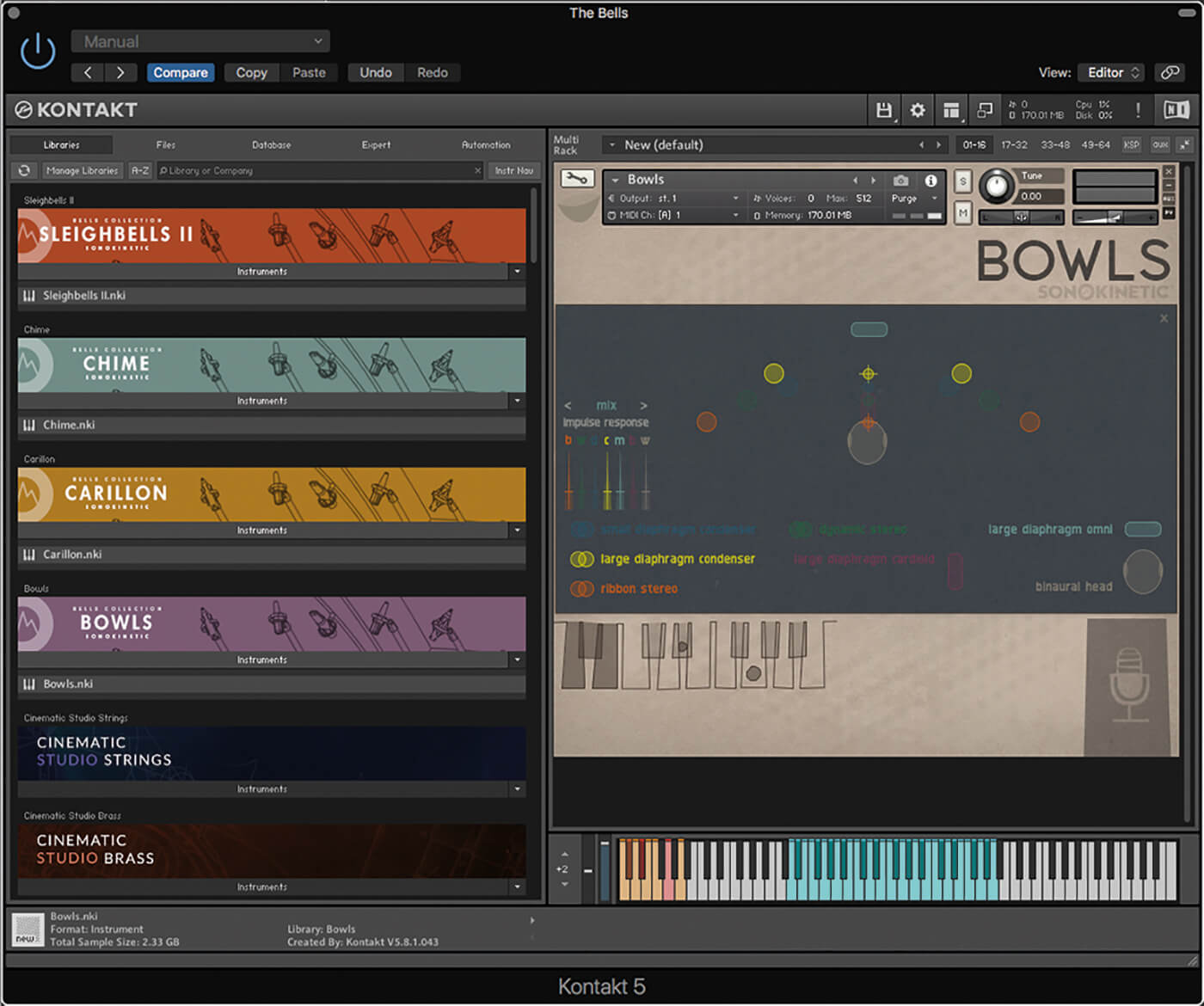 Moving back to the sample content and the first instrument in the package that piques my interest is Bowls. It is represented by four quartz-crystal bowls, which have been sampled and assigned across the chromatic scale. Some believe that the pure resonance of these bowls can be used in healing, largely down to the purity of the sound. This, like many bells, is rich and cutting, thanks to the sinusoidal frequencies within. As a default, the bowls are truly playable within a given range of two-and-a-half octaves, but being bells, too many notes result in something very piercing.

So, just as when using a glockenspiel, it will be better to approach the bowls’ use as icing-on-the-cake, rather than an element that underpins all harmony.

The clarity of the sound is stunning, though I did become quite aware of a little signal noise, which has been captured along with the notes themselves. This worsens, rather unsurprisingly, as you increase the number of open mic channels, but in many respects, it adds character rather than being a distraction. If it’s felt to be too noisy, adjusting various settings on the mic page (eg, bringing the mics closer), eliminated anything too overbearing.

The interface for Bowls is divided into six areas that affect playback, allowing for subtle change of performance, such as adjustment of tail length and mallet type. This really helps tighten things up, as the Full Length setting literally rings on for miles. There are also effective options for additional mallet strikes, including a reverse, which sounds beautifully sublime.

Short phrases can also be played back, via the Clusters section which – apart from random note phrases or varying length – can also be set to run up and down, while sync’d to the DAW. It’s effective, but somewhat random in note determination, with far greater control over note content being offered via the five Sequenced Elements, which are found within said section. Selecting one of these Elements immediately offers options for note and velocity control, albeit from a histogram-styled note-selection page.

Again, this is sync’d to the DAW, with further options for selecting triplet note lengths. While these phrases are relatively short, at a single bar in length, having the five sequencers open to keyswitching does make for plenty of musical options.

The Carillon Bell Idiophone instrument, which has been sampled here, could largely be considered a keyboard instrument with each note corresponding to its own bell. But in this case, it’s the sort of bell that might have come from a clock tower. Offering a full three octaves, the playing experience is largely the same but with added mallet types, including a Rubbed setting, which produces a beautiful sustained sound. 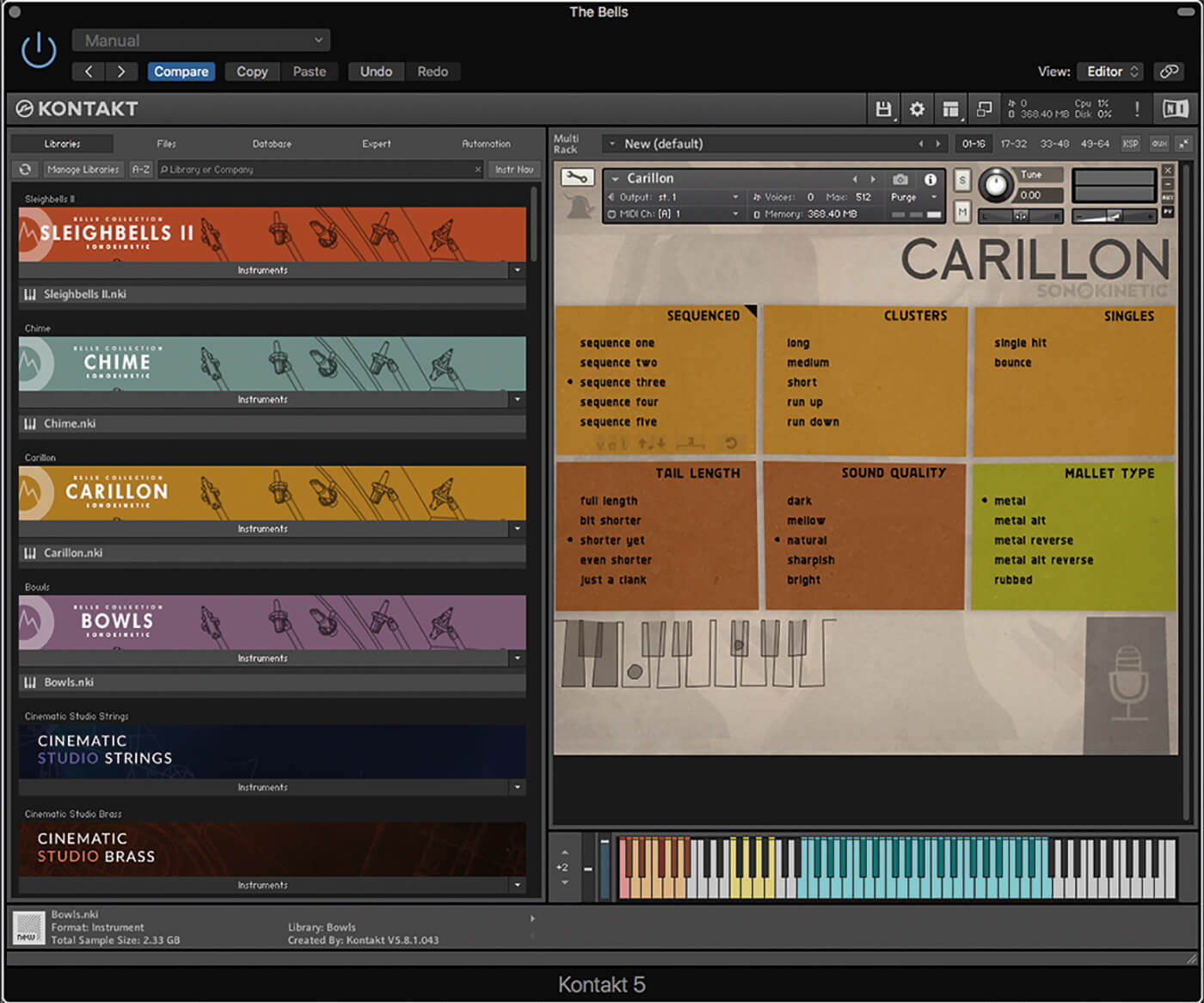 Again, the sound quality is superb and far more sonorous to the previous bowl-based instrument. In fact, you just have to imagine how a real set of bells might sound, and you’ll be firmly in the right ballpark. Sounds obvious, but hear it and you’ll understand!

The Chime instrument is very similar to the Carillon bells, other than the fact that the bells, in this case, are significantly smaller, akin to the sort of small bell that you might hear in a domestic antique clock. If you added a ticking sound effect to this, you would have the exact sound of an 18th-century clock but, again, you’ll need to be aware of its purity which, like a Glock, will cause havoc if uncontrolled.

The final part of the bell package is Sleigh Bells, in various guises. Although a simple instrument, there’s plenty to work with here, in the sense that you can select between six and 100 bells at a time, with control over basic round-robin settings, through alternation of strike. To confirm its seasonal scope, Sonokinetic treats us to a reindeer, which dances across the window as the samples play. Cute. 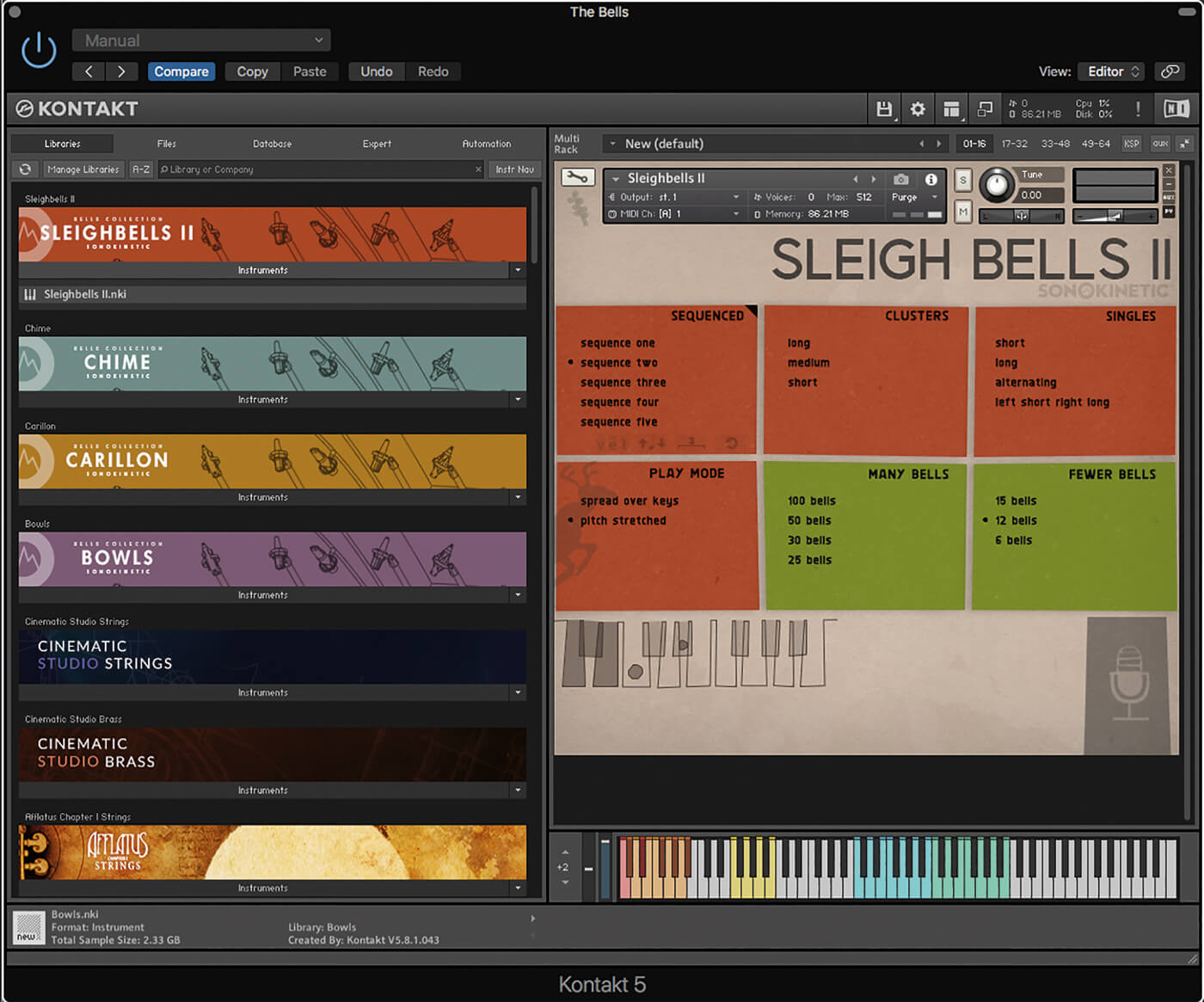 This is an interesting package; there are bells big and small, with additional elements such as the Quartz Bowls, and it’s fair to say that they all have a place and a quality, bearing in mind that all four of the included chime elements are quite different. Even the closest of the two ‘proper’ bell types are sonically miles apart.

I think it’s also the case that this is not a package for all, but it is a package at a sensible price, meaning that it really invites the users to have a look and enjoy the content. If you need Sleigh Bells once a year, you’ll want to take a look, but the further content will be bound to inspire beyond the realms of December.

Bells and chimes, by their nature, can be quite difficult to use in the right place. They can often sound quite obtrusive and it’s unlikely that you will require this content to act as the sole or main focus of your composition – or would you? The strikes can sound very piercing, but some of the rubbed patches can sound beautiful and pad-like, if placed in the right setting.

If you like taking a sound and playing around with it sonically within the DAW, there’s plenty of scope for using the bells as a starting point for something different. If you’re unsure about the whole package, the individual elements can be purchased separately and really won’t break the bank. 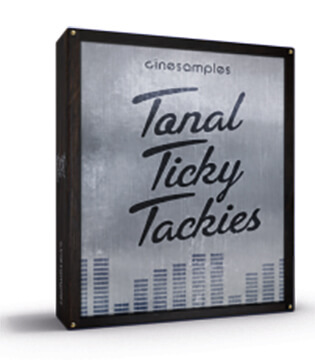 Although not strictly speaking a bell-based instrument, this offers plenty of bell content, alongside other percussive elements, which all go togetherto create beautiful sequences. A hit with media composers.

This small package includes two bell-based instruments, like bowls, which will ring on endlessly. As well as these, there are plenty of effected instruments to work with. The package was originally created as a charitable concept, hence the price, with all proceeds going to a good cause.