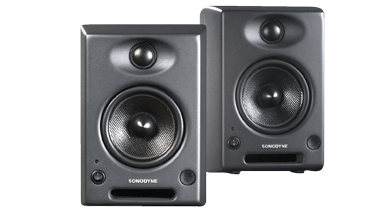 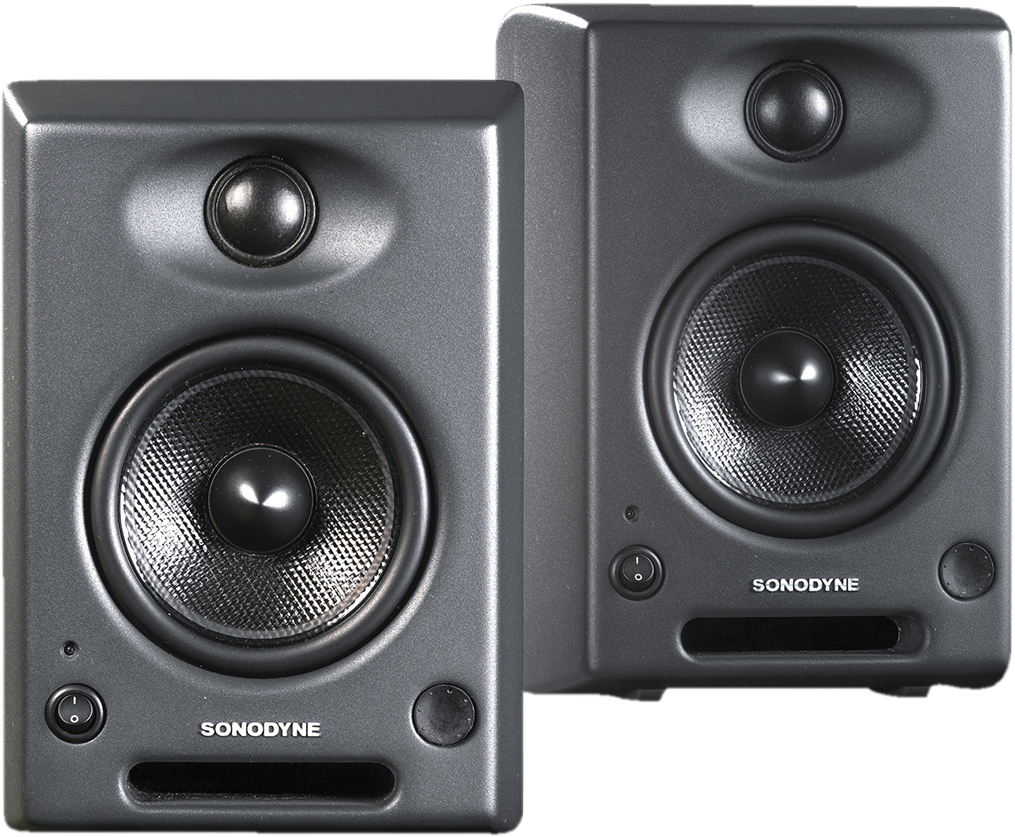 Sonodyne Electronics has been making professional audio products in India since the 1980s, often designing and manufacturing projects for other companies. However, Sonodyne has become a well-established brand in its own right in monitor manufacturing.

The SRP range comprises five two-way active monitors with woofer diameters ranging from 8in to 3.5in. The SRP 400 we’re reviewing in this issue is the second smallest in the series, with a 4.5in CURV cone polypropylene woofer and a 1in silk dome tweeter set within a waveguide. On-board analogue amplifiers operating in Class AB provide 25W of bi-amplified power to each driver and maximum SPL is claimed to be 100dB.

Pressure Mounts
Where Sonodyne’s older SM series featured handmade and hand-finished enclosures, the company has since invested in expensive pressure moulding equipment to form their latest front-ported aluminium enclosures. The result is very sleek and contemporary, with a look that closely resembles many of Sonodyne’s competitors – most noticeably Focal’s CMS 40.

We wouldn’t suggest there’s anything untoward going on, though. Modern production methods and materials are enabling monitor manufacturers to move away from the compromises inherent in traditional rectangular MDF boxes, and moulded aluminium enclosures make it easier to incorporate rounded edges, waveguides and non-parallel surfaces.

What’s more they are extremely rigid and non-resonant. Since the laws of physics define good practice in monitor enclosure design and selection of materials, it’s inevitable that things are becoming more homogenised.

Even so, the powder-coated finish is very well done and it’s available in three colours. Seeing a standby switch on the front panel is always something to cheer about, plus the SRP 400 has M6-size mounting points on its base and back. The SRP 400 also has a front-mounted level control with a centre indent at 0dB, and a 6dB boost at maximum. 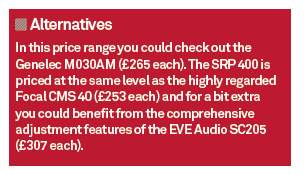 Switched On
The SRP 400 has both XLR and TRS jack balanced inputs. Since they are wired in parallel the second input can be used to daisy-chain the signal. Three frequency adjustment switches are mounted on the rear panel. Bass Roll-Off reduces low frequency content by 6dB per octave below 100Hz, and Treble Tilt induces a 2dB cut at 4kHz to compensate for excessively live rooms or close listening positions.

Although the manual states that the Bass Tilt feature has three settings there are only two switches, providing a -2dB or -4dB cut at 100Hz. The maximum -6dB roll off is achieved with both switches engaged.

The on-board amplification may be all analogue but DSP technology is used for signal processing. According to Sonodyne’s spokesperson it works on the time domain to optimise off-axis response and control directivity. DSP is preferred to analogue because it’s not as “tedious”, and quality control is markedly less challenging.

A/B Testing
The SRP 400 is a solid little performer. Stereo imaging is fairly precise and there is plenty of depth to the sound stage. We were also able to discern plenty of detail from bass instruments, with pick attack and finger noise coming through clearly on electric and double bass.

However, we did sense some colouration in the upper mids that gave the SRP 400 a slightly forced and harsh quality. To be fair this was more noticeable with acoustic than electric music. On the plus side the treble has a pleasingly open and sweet quality and the bass is particularly impressive.

In fact the SRP 400 has way more bass extension than we would expect for a speaker of its size. And far from being an illusion caused by upper bass hype, the SRP 400 remains remarkably even and manages to track the rhythmic energy of dubby basslines with aplomb. Best of all, we were unable to detect any port chuffing.

There’s a lot to like about the SRP 400 and Sonodyne’s UK distributor advises that the aforementioned upper midrange colouration smooths out once the SRP 400 is properly played in. We’re not entirely convinced that the SRP 400 will actually demonstrate how mixes will translate to smaller speakers because it sounds a bit too good, but that’s no bad thing. 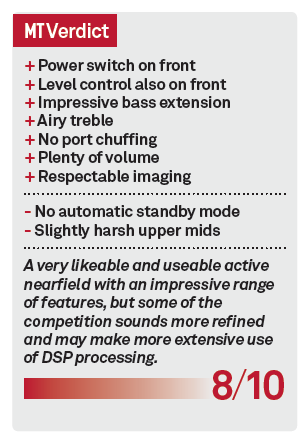