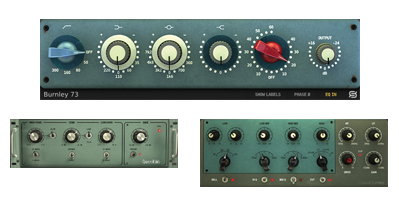 There is no such thing as a Holy Grail of EQs, with each one being able to bring something new. Mike Hillier tries out three very different vintage-EQ emulations

Having a wide selection of EQs to turn to when it comes to mixing is arguably as important as having a selection of microphones, preamps or compressors. While it may seem like a 3dB shelving boost at 12kHz should sound pretty much the same on any given EQ, in reality, there are dozens of small factors which play into the ‘sound’ of an EQ.

From the shape of the curve to the subtle harmonic saturation it may add to the signal, each EQ has its own unique colour. When it comes to mixing, having a selection of different colours available can help you to shape the mix as you see fit.

In this review, we take a look at three new EQs from Sonimus. Each of these EQs has a unique vintage vibe, capable of bringing its own signature colour to your mix.

Made in Burnley
The first of this trio of EQs is the Burnley 73, a not-so-subtly named emulation of probably the most famous British EQ: the Neve 1073. The emulation models not only the sound of the 1073’s famous EQ section, but also the two input stages, adding an output stage with +16/-24dB of gain available to make up for any level changes brought about by the EQ itself.

As has become traditional when modelling classic EQs, the Burnley 73 has attempted to model not only the sonic signature of the Neve, but also its visual aesthetic (although those with a keen eye for vintage accuracy will notice that the Marconi-style knobs have been replace with chicken-head style knobs, which while not quite authentic, are much easier to read at a glance).

The dual-concentric knobs for the mid and low bands have been kept which, while in keeping with the original, are somewhat unwieldy – at least for those of us who like to work fast, without having to spend too long with our hand on the mouse.

Sonically, the Burnley 73 is a great tool. The input stages provide options for instant gratification, adding depth and drive to the sound even before we start shaping the tone with the EQ itself. Like a real Neve, the Burnley 73 is incredibly musical, capable of fairly large boosts while maintaining a natural quality to the signal.

On vocals in particular, this EQ is a real dream to work with. The high-pass filter and low-end shelf enable you to bring warmth and body to a performance without any muddiness. The high shelf adds a shine to proceedings, but it’s the single parametric mid band which can really bring things together, whether that is cutting out a little nasal quality in the upper mids, or bringing out the chest cavity in the lower mids.

This band is so useful, in fact, that we think it’s a shame that the 1073 gets all the attention compared to the more versatile Neve 1084. And in the world of digital, why not have the best of both?

The Passive Tone
The SonEQ Pro is the advanced version of a free plug-in, SonEQ, available from the Sonimus website. It is based on classic passive EQs like the Pultec EQP-1A but, unlike the Burnley 73, doesn’t attempt to exactly clone the Pultec, instead taking inspiration from it and other passive EQs to create an all-new and very powerful tone-shaping tool. SonEQ Pro has four bands, with additional sweepable high- and low-pass filters and a variable drive output stage.

The low band copies the Pultec trick, with independent boost and cut knobs, enabling you to boost and cut the same frequency simultaneously. The exact result using this technique will depend if the band is set to ‘shelf’ or ‘bell’, but the principle is that, as the cut and boost have different Q settings, the end result will see either an emphasis or de-emphasis around the cut-off frequency, but the expected result at either side of the cut off. This technique can work wonders on low-frequency signals such as kick drums, toms or bass guitar, adding weight without any ringing or muddiness.

The low- and high-mid bands offer only a single gain knob with +/-10dB of control, variable frequency and a switch for narrowing or widening the Q. Finally, the high band is fixed as a shelf with +/-10dB gain at six, eight, 12 or 15kHz. This shelf is one of the standout features of the EQ, producing a silky smooth boost in the top end, which can be great on vocals or guitars for bringing out the air around the signal. It could also be just as at home across an entire mix.

The SonEQ Pro is a fantastic EQ, which offers a very different scope of tools to the Burnley 73, and therefore complementing it well.

Alternatively
The Neve 1073 is one of the most sought after, and therefore most frequently emulated EQs in the audio world. UAD owners have the legacy 1073 as well as a new version with Unison technology for Apollo owners. Waves, too, has a couple of EQs based on the Neve, the most obvious being the Scheps 73, based on Andrew Scheps’ own hardware unit.

Similarly passive EQ emulations are quite common, with UAD again having one of the better Pultec emulations available. Softube have an emulation of Tube-Tech EQs, which are hardware EQs themselves based on the Pultec designs. Tilt EQs are not as common. One of our favourites until now has been Softube’s emulation of the Tonelux Tilt, which has similar features to the Sweetone, but without the option of switching the pivot frequency of the tilt, or the resonant high-pass filter.

Leaning this Way or That
The final EQ available from Sonimus is the Sweetone. This is the cheapest of the three and at first glance seems the simplest, too. It has variable high- and low-pass filters, plus an additional mid-band ‘Tone’ knob, with two modes. Behind this veneer of apparent simplicity, however, lies a surprisingly useful tone-shaping tool.

The high-pass filter is sweepable from 10Hz to 2kHz, while the low-pass filter enables filtering from 22kHz down to 2kHz. Both filters have selectable 6dB/octave or 12dB/octave shapes, but the high-pass filter has an optional Blow mode which adds resonance to the filter. This resonance adds a boost in the low end at the cut-off point, which can be perfect for adding weight to low-end sources while simultaneously cutting any mud from below the cut-off point. This is the same trick we see employed by tools such as the Little Labs Voice Of God.

Apart from top-and-tailing the frequency range with the filters, the main focus on the Sweetone is the Tone control. This simple dial has a number of functions, depending on how the two switches around it are set. In Tilux mode, the Tone control acts as a tilt EQ: pushing the high end up and low end down when you dial it clockwise, and the low end up and high end down when you dial it anti-clockwise.

The pivot point of this tilt is controlled by the Normal/Sweet switch which, when in Normal position, is centred around 650Hz, while in Sweet, is centred around 2kHz. The Loud mode switches the tone control from a tilt to a pair of shelves.

This time, dialling the control up will add both high and low end, creating a quick ‘smile curve’, while dialling it down will cut the top and bottom ends, creating a mid-focused sound. Again, the Normal/Sweet switch changes the behaviour, with Sweet moving the two shelf cut-off points further towards the low and high end.

In mixing, this kind of tool can be very useful for quickly altering and placing sounds in the mix. It feels less controlled than a standard parametric, but the ability to quickly get your sounds in the right ballpark cannot be underestimated.

We could easily see this being placed early in the mix chain for various instruments, with any specific frequency issues cleaned up by a standard digital EQ, or one of the two other Sonimus EQs.

Any one of these three EQs could make a great addition to your studio plug-in collection, but they complement each other well, and provide different functionality which can be brought to bear on different instruments within your mix to produce the right result in the right context. Each is very easy to use, and has its own character.