If you’re looking to beef up your sound library in Live, Sonic Faction might have just the thing. Hollin Jones unwraps the Archetype Bundle… Details Price $199 Contact Via website Web www.sonicfaction.com System Requirements Ableton Live 9 Suite Max for Live Amazon.co.uk Widgets Many people will be familiar with the major plug-in formats on the market […] 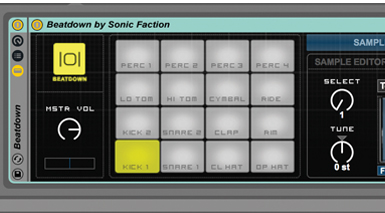 If you’re looking to beef up your sound library in Live, Sonic Faction might have just the thing. Hollin Jones unwraps the Archetype Bundle…

Many people will be familiar with the major plug-in formats on the market today, and also which ones their particular DAW is able to work with. Ableton Live is pretty good when it comes to formats, dealing with VST and AU (Mac) instruments, as well as having its own suite of bundled generators and processors.

One thing that makes Live stand out from other DAWs is its ability to be extended using Max for Live, an application that’s used for designing instruments and effects using software patching and building blocks. Based on Max by Cycling’74, it comes as part of the Live 9 Suite install, and can also be downloaded separately and for free from this website, a link which can be tricky to locate. After you install Max for Live you’ll be able to open any instruments created with it inside Live itself, and it’s required to use this bundle.

The clever thing about Max for Live, a bit like NI’s Reaktor, is that you can use it to build pretty much anything you like as long as you have the skills. Make no mistake, building software instruments isn’t for the faint hearted. The vast majority of people prefer someone else to do the hard work and just pay them for the end results, and that’s what you get with this bundle.

Sonic Faction is a collective of musicians and programmers, and this bundle can be installed in Live 9 Suite on Mac or PC by double-clicking the installer files, after which they’ll be available in any Live set. They behave just like other Live-native instruments and have their own interfaces that exist inside the Device area at the base of Live’s window. They’re even designed to look like they’re part of Live, and don’t have their own pop-out GUIs like VST or AU plug-ins.

There are eight instruments which are also available separately, though as you might expect the bundle price represents a significant saving over buying them all individually.

The first is Beatdown, a drum machine with over 40 kits and the ability to swap out individual drum sounds. It’s logically laid out and the main interface has various sections. There’s a sample editor where you can edit each drum sample and a Global section for making settings across the whole instrument.

A 16-channel mixer lets you submix the kit and there’s a two-part LFO section as well as multiple effects in the FX section. A good selection of available effects enables you to process and dirty up your sound nicely within the instrument, and the kits are suitably hard-edged and in-your-face, which is perfect for EDM.

Sickness is next up, a polyphonic synth with two switchable oscillators plus sub and noise which you can mix together to create massive synth sounds. It has the sound shaping sections you need : Filter, Envelope, Shape and LFO as well as a good FX section and a programmable arpeggiator with configurable groove.

There’s a healthy selection of presets and you’ll find a wealth of cool sounds from huge basses through to eerie pads and spiky leads. Like many of the other instruments in the bundle it features a preset morphing system for blending between versions of a sound as well as a randomiser for instantly dialing in completely new settings, which is always fun and often useful too.

Evilfish 303 is based on the classic TB-303 monophonic bass synth and promises ‘squelchy analogue madness’ with its six levels of overdrive, filter morphing, waveshaping, FM and an effects section that includes saturation, autopanning and frequency shifting among other things. It has a random pattern generator that will come up with an endless selection of acid basslines for you, and this has transpose, complexity, swing and length controls as well as the ability to punch in your own pattern. It sounds nice and fat, and the pattern section is really useful for quickly generating some authentic-sounding acid bass patterns.

Hatchet is described as a ‘retro lead weapon’ and is a monosynth capable of generating both piercing leads and fat basses. Its interface is quite straightforward and you can blend and detune its oscillators to achieve a fat analogue sound. Like some of the other synths it has a number of control sections including filter and LFO and there are effects and an arpeggiator, again with preset morphing and a sequencer. The arpeggiated sounds are particularly cool with a genuinely retro vibe to them.

For those that pine for the 1980s, the Clone synth is billed as a throwback to that era, though it sounds fairly contemporary, perhaps because of the prevalence of retro synth sounds in modern EDM and pop music. Sharing a similar design to many of the other synths, it also features a Delta Triangulator section that you can use to quickly dial in variations to the sounds.

Pulsator is a synthetic sounding synth with lots of waveshaping, FM and distortion effects as well as an X-Mod oscillator with a special interface to help you dial in mutations to the sound, creating anything from screaming basses to detuned leads and pads. 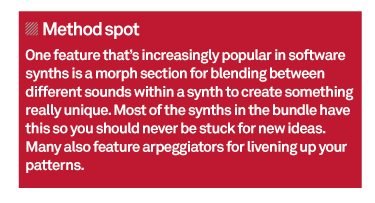 Check out this synth for techno leads and stabs as well as filthy bass patches. Whoosh Machine – the names get a bit literal at this point – is a sound FX design synth designed to generate textures, rises and falls for both sound design and soundtrack work and for punctuating dance tracks. Parameter changes are tempo synced, and the FX blender allows you to mix between three sound sources each with a different type of noise, texture or synth tone.

It’s actually got a really good sound to it, making the kinds of futuristic, mechanical sweeps and soundscapes that can be useful in a range of musical applications, especially for scoring.

Last but not least of the instruments is Rogue One, another mono synth with two harmonically rich vintage oscillators, waveshaping and FM for creating huge analogue basses and fat lead sounds. It features a double arpeggiator for extra flexibility and has the FX and morphing tools of the other synths. The bundle also includes free synth and a drum step sequencers for Push, APC40 and Launchpad hardware units.

The Archetype Bundle certainly contains enough instruments to really add a lot to your Live setup if you’re working with any kind of electronic music. The fact that most of the synths share a similar basic layout and design means the learning curve is relatively gentle and even beginners should find them pretty easy to get to grips with.

They all sound good and there are some excellent patches to be had, though not all the synths sound wildly different from one another. That’s really an argument against buying them separately, which you’re not likely to do anyway: for the price of three or four (individual prices vary) you can get all eight, so you’re still a winner.

With any instruments created using Max for Live you’ll only be able to use them in Live, unlike perhaps a VST instrument which could be used in any host. The trade off is really nice integration with Live itself and good optimisation of the processors. When you only have to focus your efforts on compatibility with a single DAW, you can expend more energy on it. Ultimately this is a solid collection of instruments for electronic music production in Live, with some great performance features that will surely bring an added dimension to your productions. 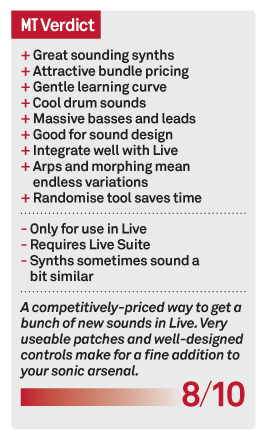