Producers and composers love being the masters of their domain, but if you need to tame your beats, Zero-G might have just the answer. 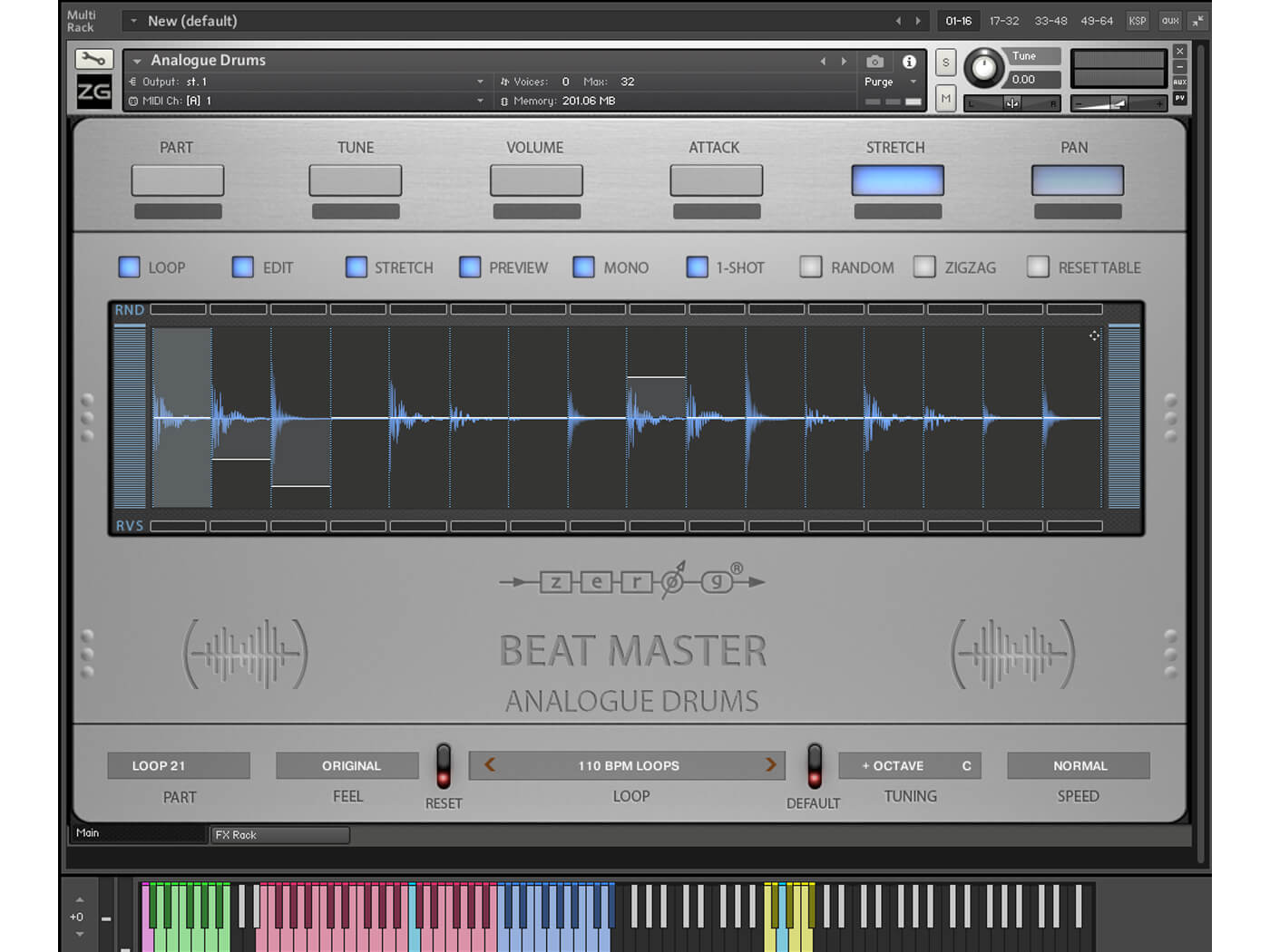 Zero-G has recently had huge success with its ever-expanding Ethera series, alongside its exceptionally clever Herz-OG fully-fledged synthesizer, all working within the Kontakt format. Now the company turns its attentions to beats, with a sample-trigger package that lends itself beautifully to creative drum deployment.

Beat Master is a Kontakt-based instrument which, simply put, allows for the loading and triggering of a vast library of drum samples that ships with the product. The extensive 3GB content is compiled from individual drum samples and loops, which have been spliced, sliced and diced in a way to make access and use particularly easy. This adds up to a sizeable collection of 4,000 drum loops, but all with a large amount of editing options, allowing the user to place their own stamp on the loops, with a minimum of fuss.

Once Beat Master is loaded, it’s then a matter of selecting one of 14 musical styles, organised in patches, where it’s possible to tweak and choose settings to either further endorse the chosen style, or migrate a considerable distance away from the starting point. Each loop is presented in a format which is reminiscent of a sliced loop, as first pioneered by packages such as Steinberg’s ReCycle. Due to this slicing, all loops will snap immediately to the chosen tempo of your DAW, also allowing for simple doubling or halving of the loop’s tempo, thanks to a global drop-down menu. 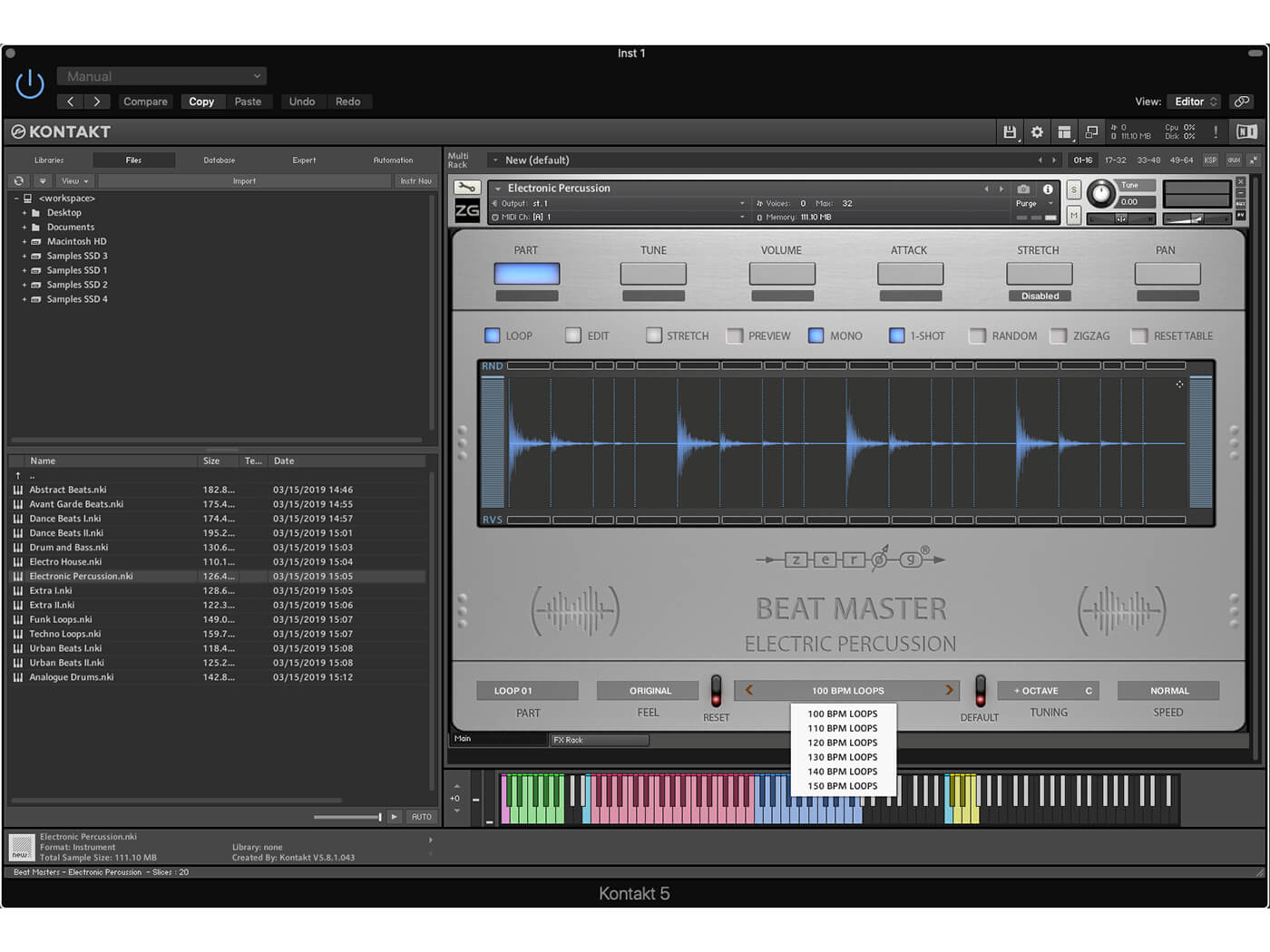 Immediate results are obtainable by triggering loops directly from the keyboard. Within each chosen genre and style, there are a number of drum loops available, all of which may be both triggered and key-switch from the keyboard. There is also an option to trigger the sample or loop via an exportable MIDI file. It takes me a while to work out exactly how to drag and drop the MIDI file; while it is clearly possible, the manual only alludes to this functionality and I’m left to undertake a bit of trial and error to eventually locate a very small icon to the top/right of the wave window which yields the file: but it is unmarked, and certainly not what one might call obvious.

Once exported, the MIDI file triggers the sliced elements perfectly. However, I did immediately think that while this option could be very useful for more precise production results, it’s actually the spontaneous nature of Beat Master that is its real strength, particularly when you consider that within each musical genre, there are a considerable number of useful grooves and you might find yourself simply gaining access to the selection through programmed key-switching anyway.

While the preset content provides a wealth of choice, things get really interesting when you start to edit the templates, creating content which will be a little more unique. The central wave display is where this takes place, in conjunction with the buttons located above; the first element being described as Part. This is possibly a shade misleading, as it’s far more about selecting a different sound, which is undertaken by directly clicking on the wave while in edit mode, with an upward/downward mouse movement being required to change the sliced timbre.

It’s easy and quick to get different sounds, although it’s even quicker to change all sounds through a click of the Random button, which will literally randomise the entire loop, depending on the selected parameter. In the case of the Part parameter, this means that all of the sounds will change immediately, which can yield chaos and interest in equal amounts. This proves to be a point of endless fasciation, often starting a train of thought for an entirely new loop, which could be saved as a new user patch.

Another favourite within the editing domain is the Stretch parameter, which allows for the stretching of a given partial within the groove. Depending on the timbre being stretched, the results can again be interesting and rewarding, while the more obvious Pan parameter allows for the simplicity of offsetting a given slice to a space within the stereo image. Contextually, this adds immense interest to a loop, with the bonus of creating space in the loop as well. 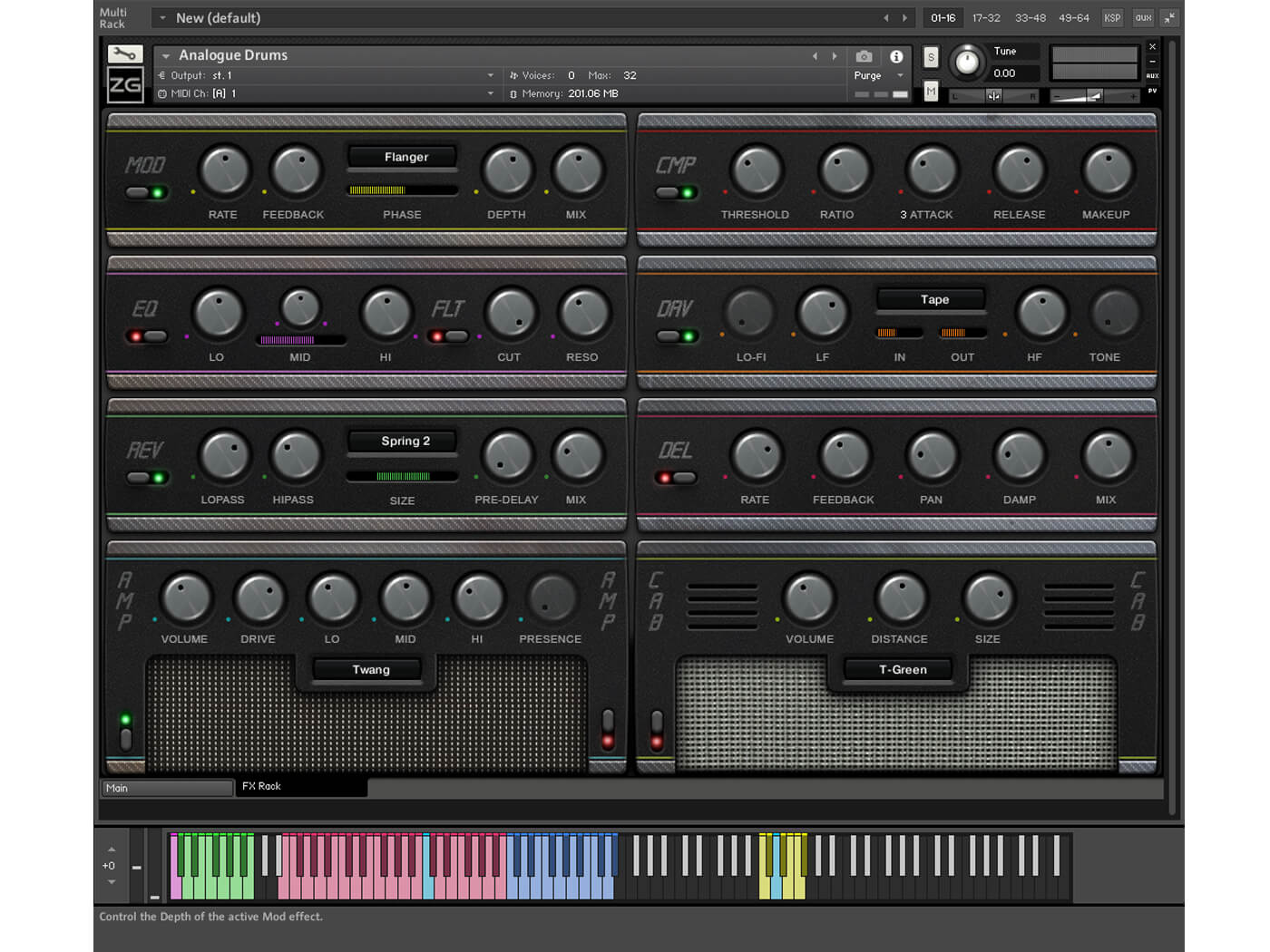 The possibility of randomisation within the stereo imaging makes for a quick and easy route to unique interest, while the Zig-Zag parameter places each pairing of slices in a hard left/right configuration, which in the case of Stereo panning is extreme, but very usable.

Zero-G has included a second layer to Beat Master, which is entirely centred around effects – and what a comprehensive set it is, too. With eight distinct areas, for everything from reverb and modulation effects through to amp and cab simulators, it’s a very useful back-end addition.

The flanger and phaser are highly usable, with the ability to dial in subtle amounts, or ascend to a frenzy of resonating feedback, while the reverb element is packed full of models, which extend from the more mainstream room-style reverberations through to numerous resonant and warped effects. These prove excellent in situ, providing a whole other facet to the Beat Master compendium.

I’m both surprised and delighted with how much can be achieved from within this area – and more importantly, it sounds hugely interesting, in keeping with the rest of the product.

Beat Master is a curious beast at first sight, as you read the description, load up the package and then find yourself wondering where the collated 4,000 loops really are. I found that the best results were obtained by digging a little deeper into the menus and editing. In a sense, Beat Master feels far more about triggering beats on the fly, than about the more programmed quotient that many producers might be used to.

Zero-G has helpfully colour-coded the key-switch areas on the NI keyboard, which drops down from within Kontakt, inline with many libraries. I find this to be hugely useful in working out which elements were where and to predict exactly what is doing what. With such a huge investment in content, you’ll need to equally invest a little time in finding what you like – and that might not necessarily be within the genre you think, when confronted with the initial patch-loading scenario.

Away from the preset, it’s got plenty of non-destructive editing capacity to allow anyone to be creative, either with existing ideas or when deploying the randomisation feature. Worth pointing out that for the very sensible price tag, it offers an awful lot of drums for your buck!

The truth is, we all tend to need drums on a fairly regular basis and while Beat Master offers plenty of preset-based content, it’s both usable and very easy to get quick results which move away from the original preset construct. The editing side of Beat Master is quick, easy and non-destructive, but there is no doubt that it will yield results far quicker if played as an instrument, rather than controlled through a DAW in the more conventional MIDI-file setting. 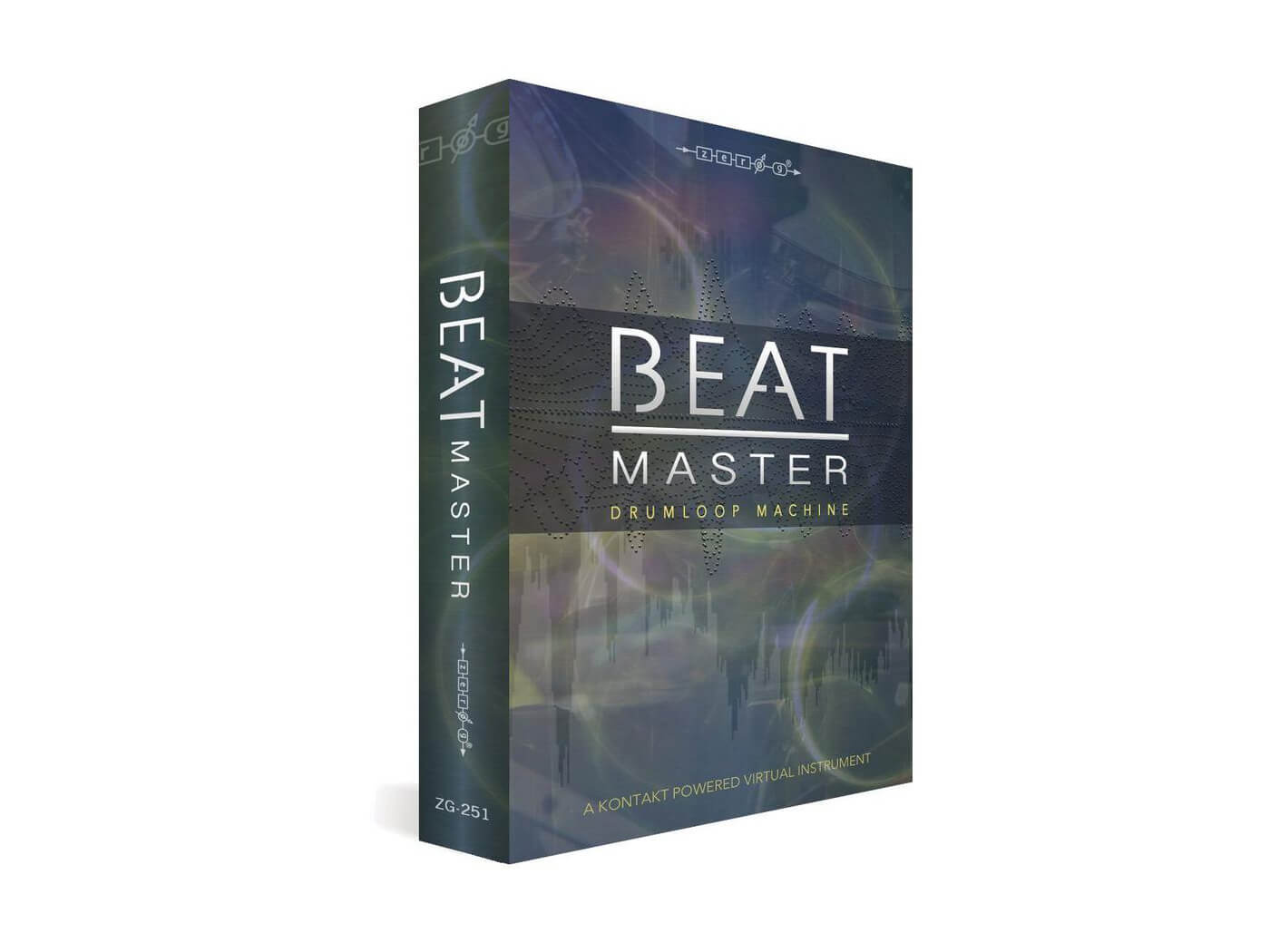 However, many will be pleased this option is there. The addition of a powerful and comprehensive effects section adds a final layer of welcome sheen, representing something of a bargain for anyone who needs a comprehensive set of drums, especially if working on a budget. 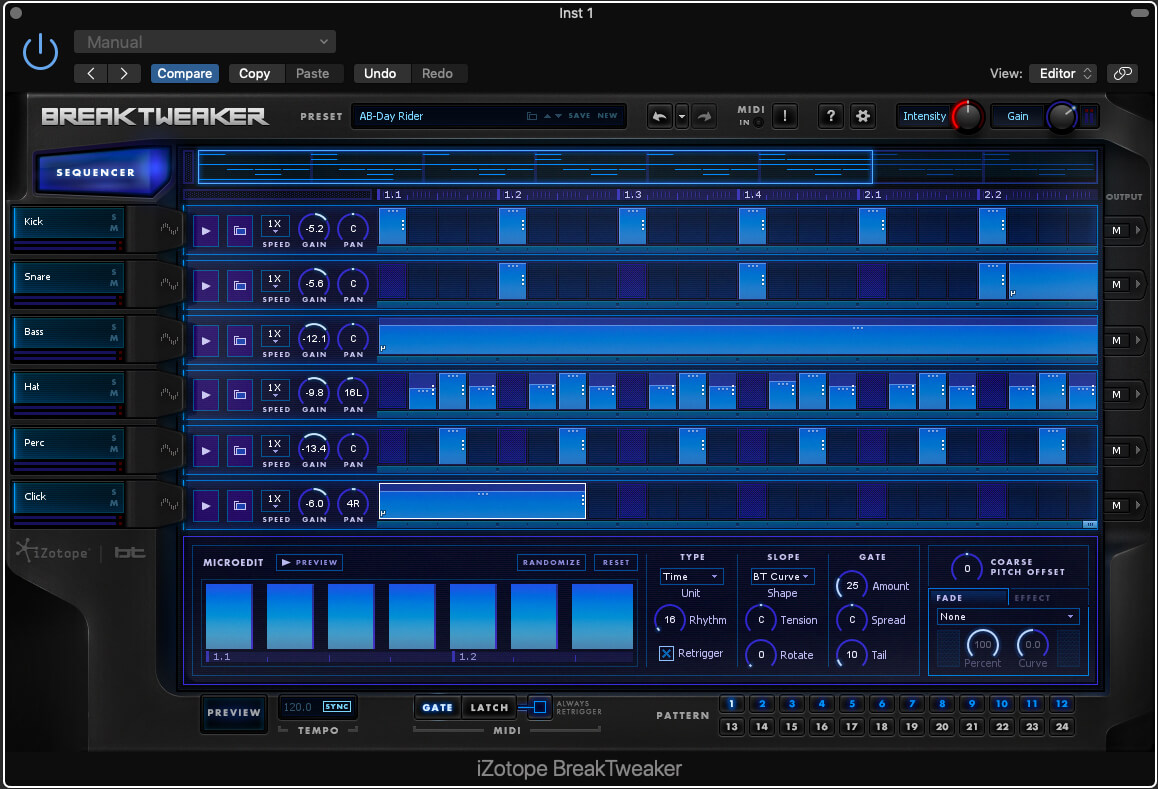 iZotope’s future beat machine was developed in collaboration with BT and offers a considerable variety of content, particularly in its current expanded guise, which contains vintage to modern sound sets. BreakTweaker offers plenty for producers, DJs and soundtrack composers alike. 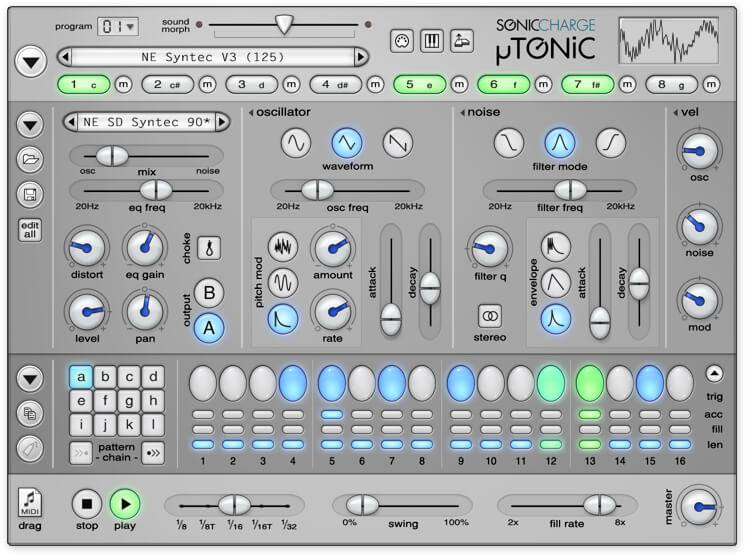 This is a powerful little plug-in which takes the form of a more conventional drum-machine format, while allowing for considerable timbre-based editing for endless sonic possibilities. Patterns can be exported and imported, with an infinite supply via the Sonic Charge Patternarium portal, for an inexhaustible supply of inspirational pattern-based content.