Having broken free from Waveform, Tracktion’s hybrid synth is going it alone as a solo plug-in. But can it stand on its own two feet? 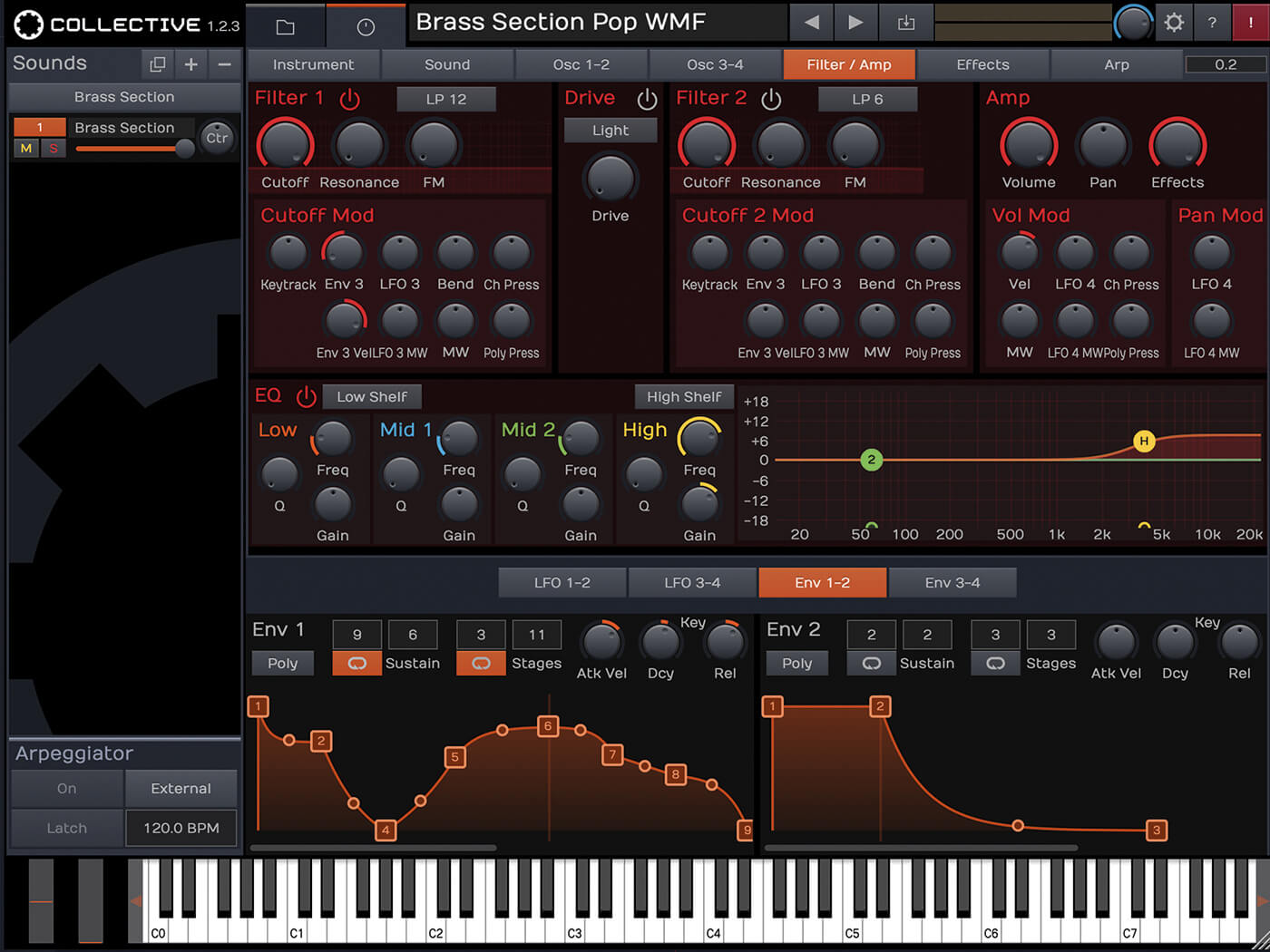 Modern software-based subtractive synths are often inspired by if not directly modelled on classic hardware of the past. But there’s another category of sub-synth that focuses on entirely new variations on the traditional subtractive theme. Tracktion Collective is a good example. Previously available only as part of Tracktion Waveform Pro, it can now be yours as a plug-in instrument.

As well as the usual Windows and macOS options, this hybrid synth is also available on some flavours of Linux. Tracktion’s support of the Linux platform is commendable, bringing professional-grade audio tools to a family of operating systems that holds great promise for those breaking the Apple and Microsoft duopoly but one that is too often overlooked by commercial developers. Specifically, Collective has been tested with the popular Ubuntu Linux, and so should work well on other Ubuntu-based Linux distributions. It has also been released as a package for RaspberryPi.

Collective is subtractive synth at heart, with the usual oscillators, filters, LFOs and envelope generators. Alongside this traditional subtractive formula are features that increase its potential:

Collective’s oscillators can load samples as an alternative to generating standard repeating waveforms or noise patterns; and the oscillators can be configured to function as FM modulators, which opens up a new dimension of possibilities. Throw in multi-timbrality, four effects processing slots and a built-in arpeggiator, and it’s clear that Collective isn’t messing around.

Collective launches with its preset browser view up front. Collective refers to its presets as ‘instruments’ and includes a large library of such, in which you’ll find bread-and-butter acoustic-type instruments such as pianos, strings and bass guitars, along with the full gamut of synth-style instruments. The flexibility of Collective is on full display here, and while there’s some chaff among the wheat, the majority of the preset instruments sound great and are eminently useable.

Instruments are comprised of one or more sounds arranged into sound layers, which are listed on the left of the plug-in’s window. Each layer is essentially an entire instance of Tracktion’s Acktion synth engine, and has four oscillators, two filters, four LFOs and four envelope generators.

In many respects, the sounds hosted in these layers are entire synth patches in
their own right, and you can save sounds as standalone files and reuse these in the layers of other instruments. No library of sounds is included though, nor is there a way to automatically extract sounds from one instrument to load into another.

Each layer can be limited by key range and/or velocity range. There’s also a rather elaborate (and kind of arcane) triggering system that uses logic statements to decide whether or not sounds will trigger in response to incoming note messages. Layers cannot be assigned to individual MIDI channels though, because Collective’s MPE (MIDI polyphonic expression) support requires all 16 channels to be available for carrying the detailed MPE messages.

Macro control knobs sit underneath the browser for quick modification of the most important parameters. Collective will take you a long way with just preset instruments and macro control adjustments but sooner or later you’re going to want to dive in
and switch to its Parameter view.

The Parameter view has multiple pages for setting the parameters of each of Collective’s synth modules. There are pages for defining details of the instrument you are creating/editing, and the sound contained in the currently active sound layer, followed by pages for managing the various synth modules, starting with the Oscillator view.

Here you can specify the source that each of the four oscillators will use, with a choice between standard subtractive waveforms (sine, triangle, pulse and saw), white or pink noise, or a sample.

The plug-in comes with a wide selection of samples, mostly of acoustic instruments, and many of these are actually key and/or velocity switched multi-samples, and can be quite detailed. You can also load your own samples into the oscillators.

The oscillators have a context-sensitive area that changes according to the source being used. When using samples, this area is where you select the source sample and tweak its basic parameters. If using a waveform, Collective provides controls to adjust the wave’s phase and sync, except when using a sine wave, which also reveals dials for morphing and modifying the shape of the sine wave. There’s an illustration of the current waveform behind the controls. 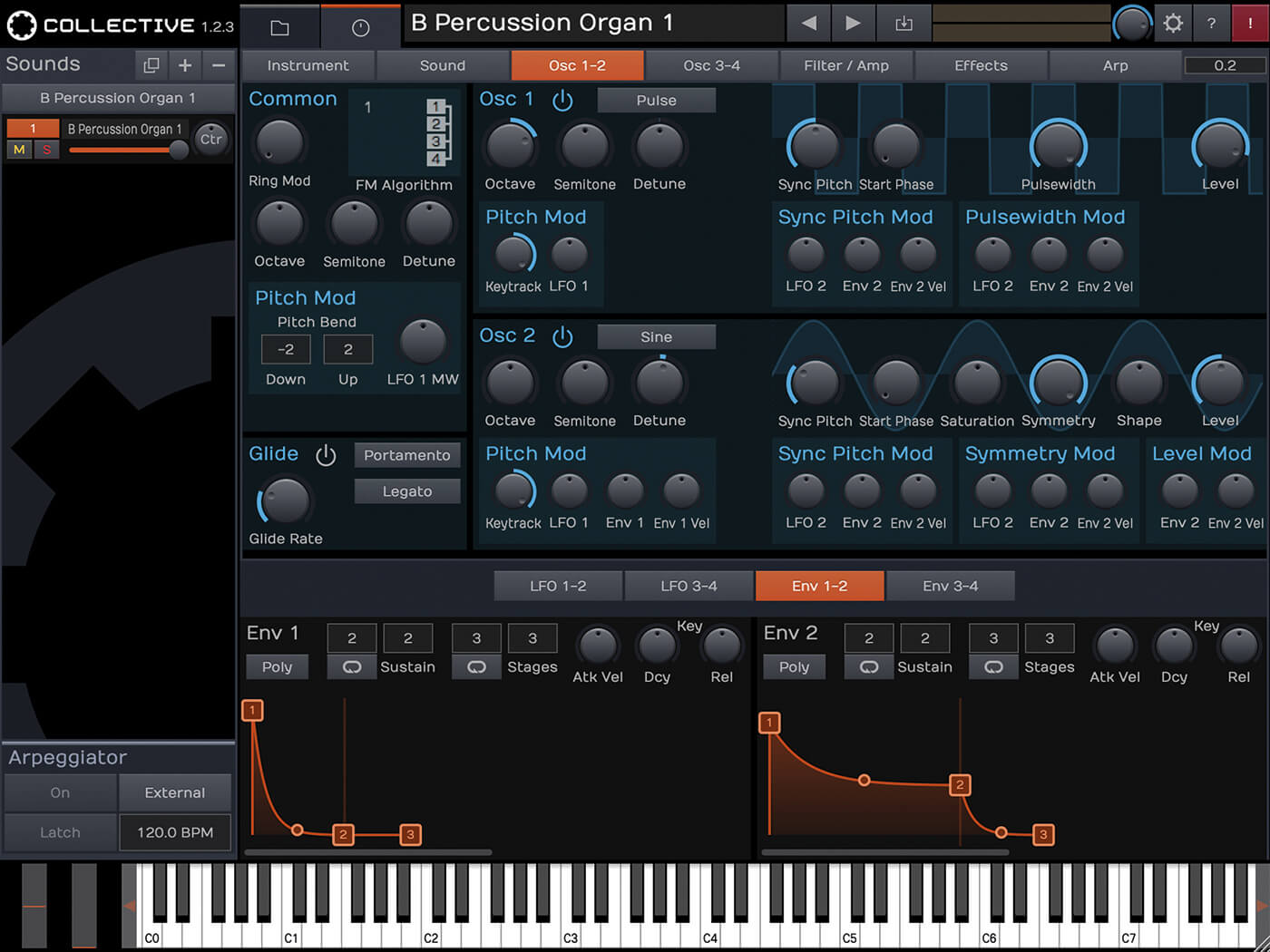 Collective has multiple ways of blending the oscillator signals together, in the form
of a ring modulator and an FM stage. You can choose from 10 FM algorithms, the first being equivalent to simply mixing each oscillator’s signal, effectively bypassing the FM processing altogether. Dial in a different algorithm though and you get a versatile four-operator FM synth.

Collective’s two multi-mode filters offer 12 filter models, including comb and redux, and there’s also a four-band parametric EQ processor. On the effects page, there are four configurable effects processing slots. With only nine effects, things feel a little minimal. But the typical reverbs, delays, choruses and so on remain useful with
synth sounds regardless. On Collective’s arpeggiator page, you can configure the arpeggiator’s pattern or load in a MIDI pattern of your own.

Collective’s LFOs and envelope generators are shown at the bottom of all parameter views. The LFOs are standard fare, with 12 waveforms, while the envelopes are very flexible, containing up to 32 nodes that can be manipulated by dragging within the envelope view. These ensure Collective has plenty of modulation sources but the modulators are hard-wired to particular parameters and cannot be freely routed. A related frustration is that, while Collective exposes all of its parameters to automation, it doesn’t have any MIDI-learn capabilities or set-up pages that would simplify mapping those parameters to hardware controllers.

Collective sounds superb. The instrument features a huge range of nicely designed presets and sounds. Better still, there are two expansion packs currently available, Platforms and Beta Maxed, both of which can widen the scope of professional-quality instruments, sounds and samples available to Collective users. This hybrid synth does have its issues but, nevertheless, the way Tracktion has hybridised subtractive, S&S and FM synthesis makes for a flexible and capable synthesiser. 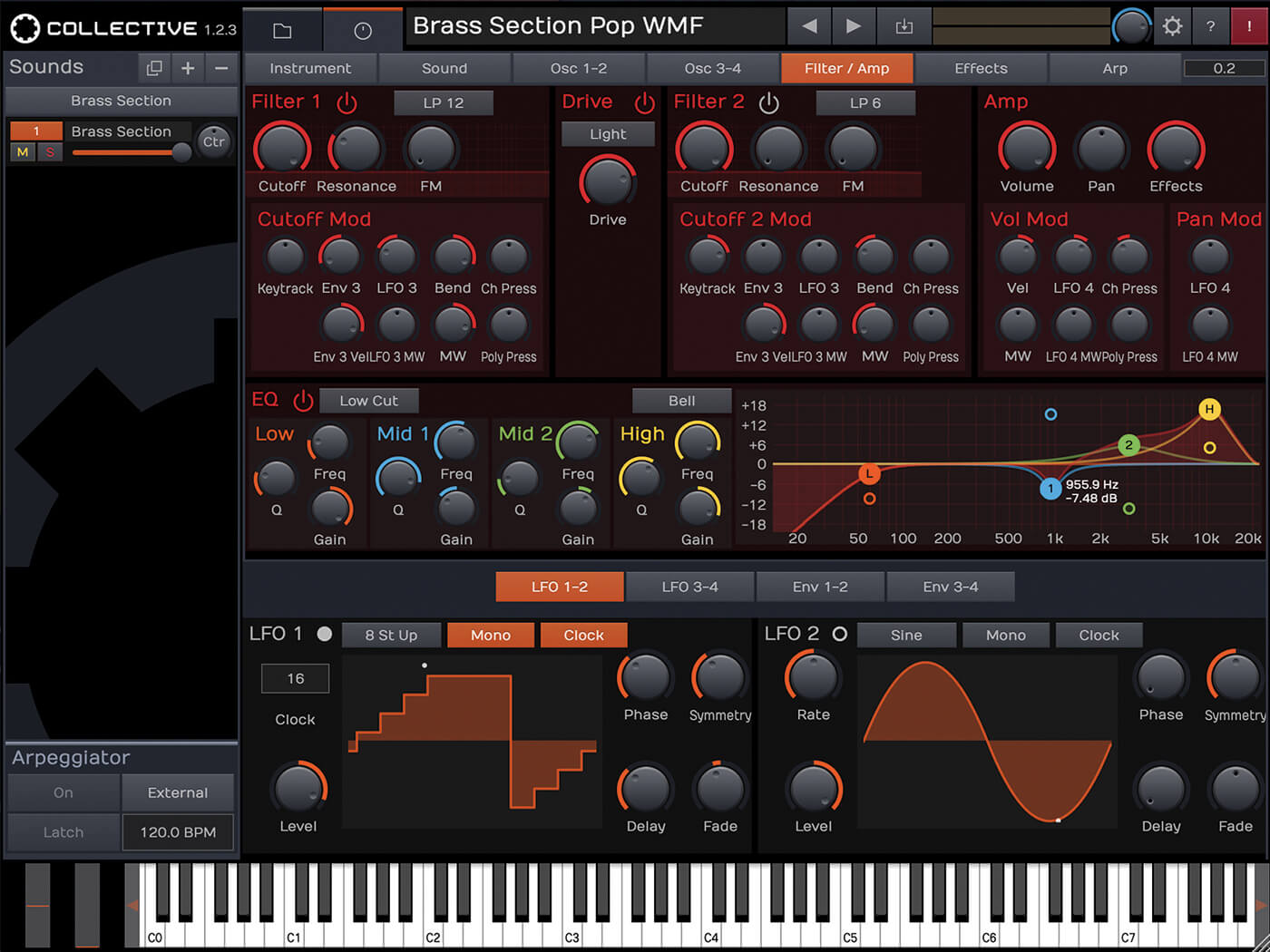 Different synthesis techniques create different results, and so most composers and producers need access to a range of synths to cover the most disparate eventualities. In
some situations, the immediacy and lack of fuss offered by sample-based instruments is most desirable. Other times, sculpting sounds to sit perfectly within a track is a better option, and here it’s subtractive and FM synths that are more regularly called on.

By combining all three of these synthesis methods, Collective could become a go-to soft-synth, especially among those who prefer tweaking strong-sounding presets to diving deep into sound editing. Those who prefer to get their hands dirtier will be enticed by Collective’s hybrid approach but may feel a bit constrained by the plug-in’s shortcomings.

Long a favoured plug-in for many producers and musicians thanks to the immediacy of its sample-based sounds, the latest version of SampleTank has an overhauled sound engine and some 8,000 sounds.

This software synthesiser leverages the Zen-Core engine found in Roland’s flagship hardware to create an instrument with wide capabilities. Roland offers an ever-expanding library of add-on packs too.