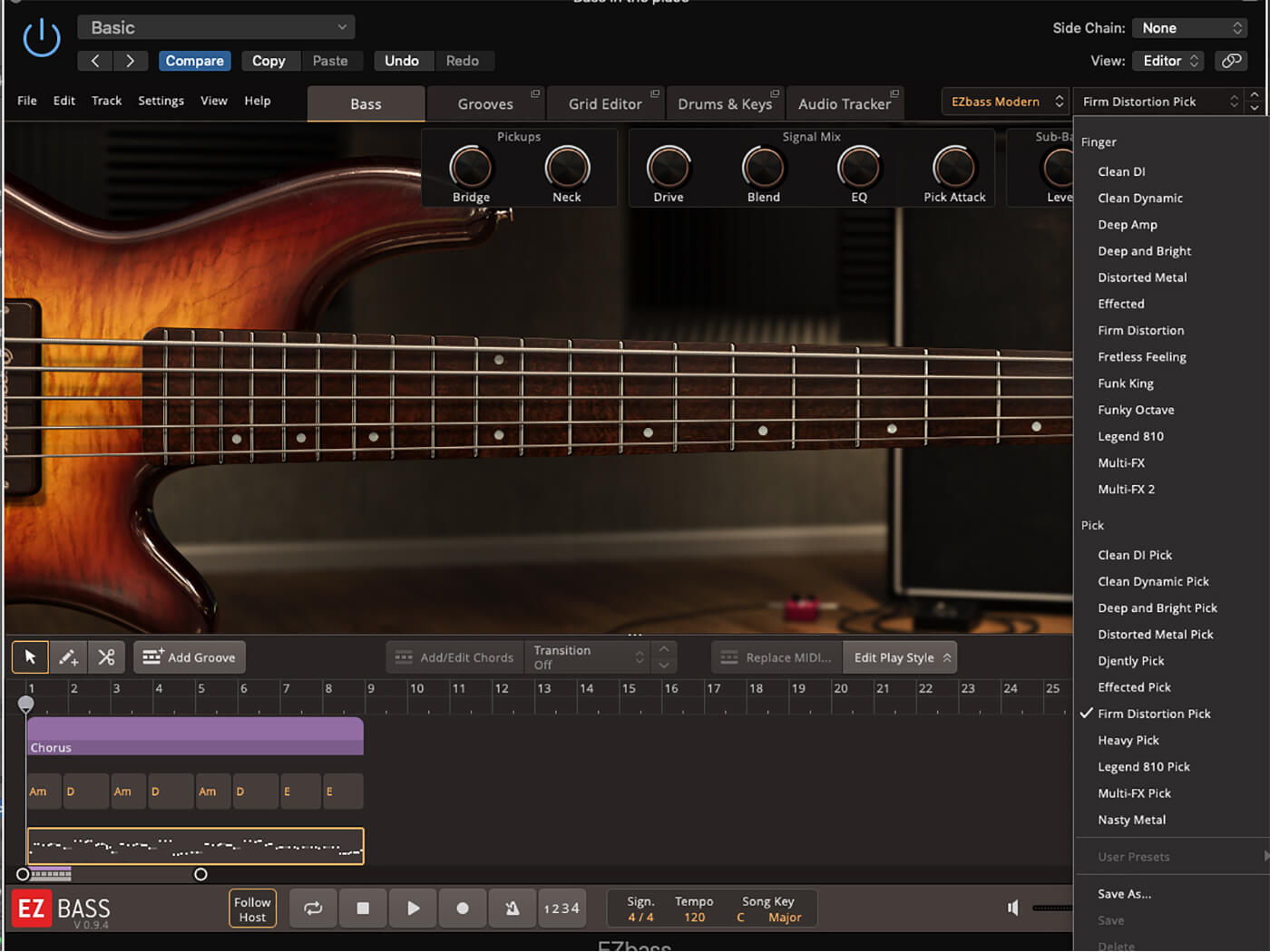 With its ever-expanding series of EZ and Superior drum products, it seems almost as if Toontrack is planning to put together the perfect virtual band. The Umea-based sampling supremo has changed the way many of us work with drums.

Its Superior Drummer library is an extraordinary tool for creating realistic musical content, and offers an astonishing amount of control at every turn. Toontrack’s EZKeys brought the same level of expertise to virtual keyboards and pianos too. Now, those much-anticipated low frequencies are getting the Swedish treatment too.

Given Toontrack’s massive success with its product catalogue for drums and keys, we wonder why it’s taken the company so long to address requests to bring that same sauce to the bass guitar. Toontrack’s EZ line has always been an intuitive and accessible interface with which users, particularly singer-songwriters or those scrambling for backing bands, can turn out tracks quickly and comfortably. EZBass, too, is a significant timesaver for those in need of low end.

Sampling instruments well is difficult. That’s especially true for bass. Aside from the wild variations in timbre between one bass guitar and the next, there are many ways to invoke changes in tone by altering the playing style and sound. Do you play with fingers or a pick? Do you slap or strum? What pickups and amp colouration do you opt for?

Fortunately, EZBass packs in an immense diversity of sounds. Toontrack has included large swaths of content to cater for all tastes and, in the unlikely event that you can’t find what you want straight out of the box, there are plenty of options to create your own musical and timbral content too. 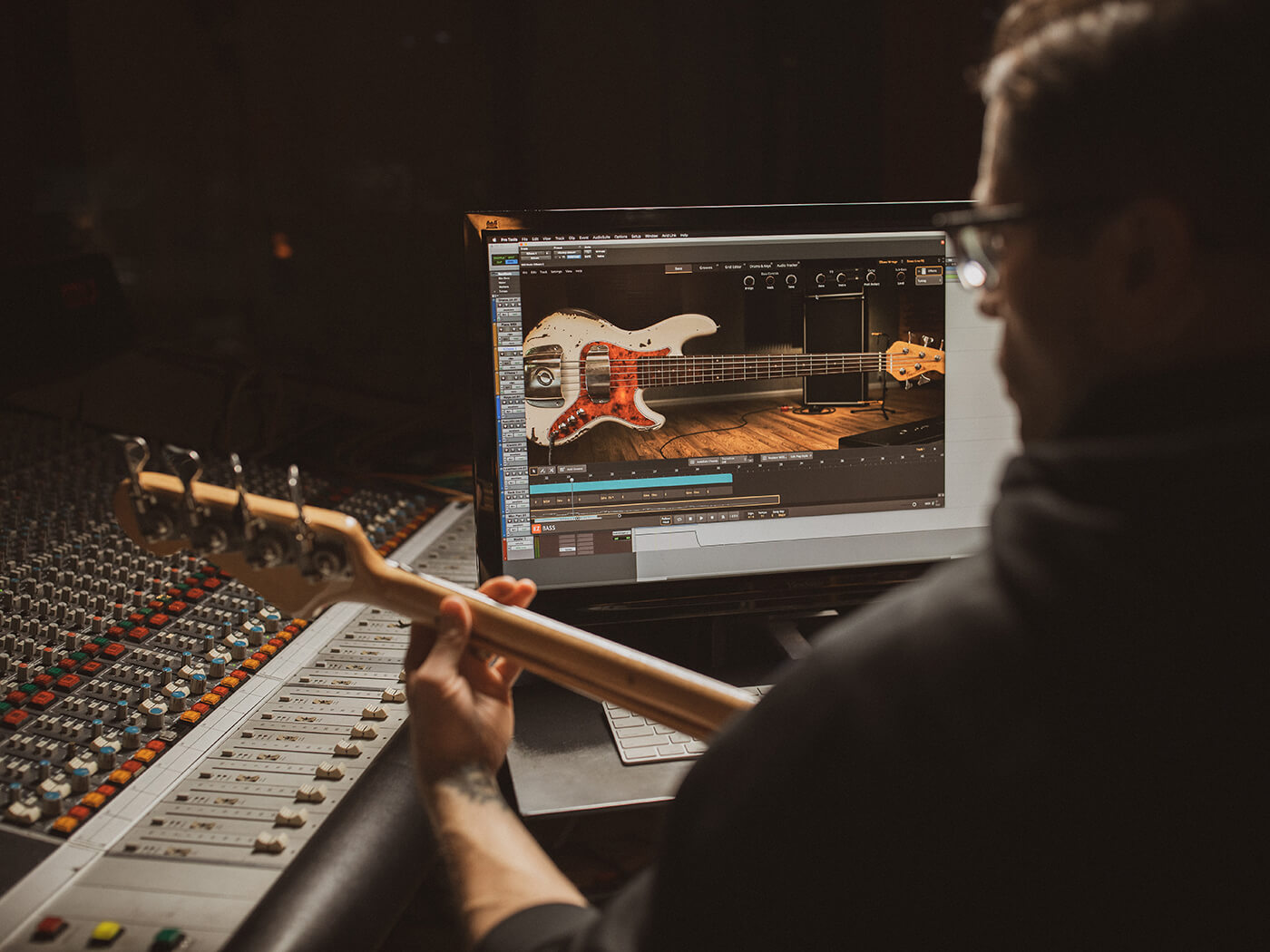 Toontrack has included samples from two bass guitars. The Vintage bass is modelled on the iconic Fender Jazz, suitable for anything from pop, rock and metal to its namesake genre. The Modern bass is represented by a high-end Alembic, a brand also endorsed by many top professional musicians.

According to Toontrack, the Modern bass sports a rounded tone, as well as a considerably different harmonic palette to the Fender-based Vintage bass. In addition, both virtual instruments support an extensive set of tailored articulations. The Vintage bass features fingered and pick playing techniques, while the Modern bass adds some slap to the armoury.

As usual, Toontrack’s attention to detail shines through. There are round-robins that consist of alternate fingerings and multi-directional picking, while the slap samples and articulations, which include tapping, ghost slapping and alternating percussive articulations, reflect the complexities of the playing style.

Both the Vintage and Modern instruments offer considerable tonal control through the Bass Control Strip, where the volume, EQ and compression of independent tonal elements, such as the bridge and neck, can be adjusted. The healthy number of presets includes clean DI and heavily distorted sounds, with distinct settings for picked and fingered playing styles. The sampled note range also extends down to a low A, below the more common E, allowing the EZBass instruments to dive beyond the preserve of regular four-strings.

Used with a simple DAW-based setup, with samples triggered via a MIDI keyboard, EZBass sounds very convincing. Human touches add to the realism, with each change in velocity causing variations in twang and string rattle. Users can get further amp-style controls from their DAW too. But even without these next-level options, EZBass can do a fine job on its own, thanks to the aforementioned Bass Control Strip. 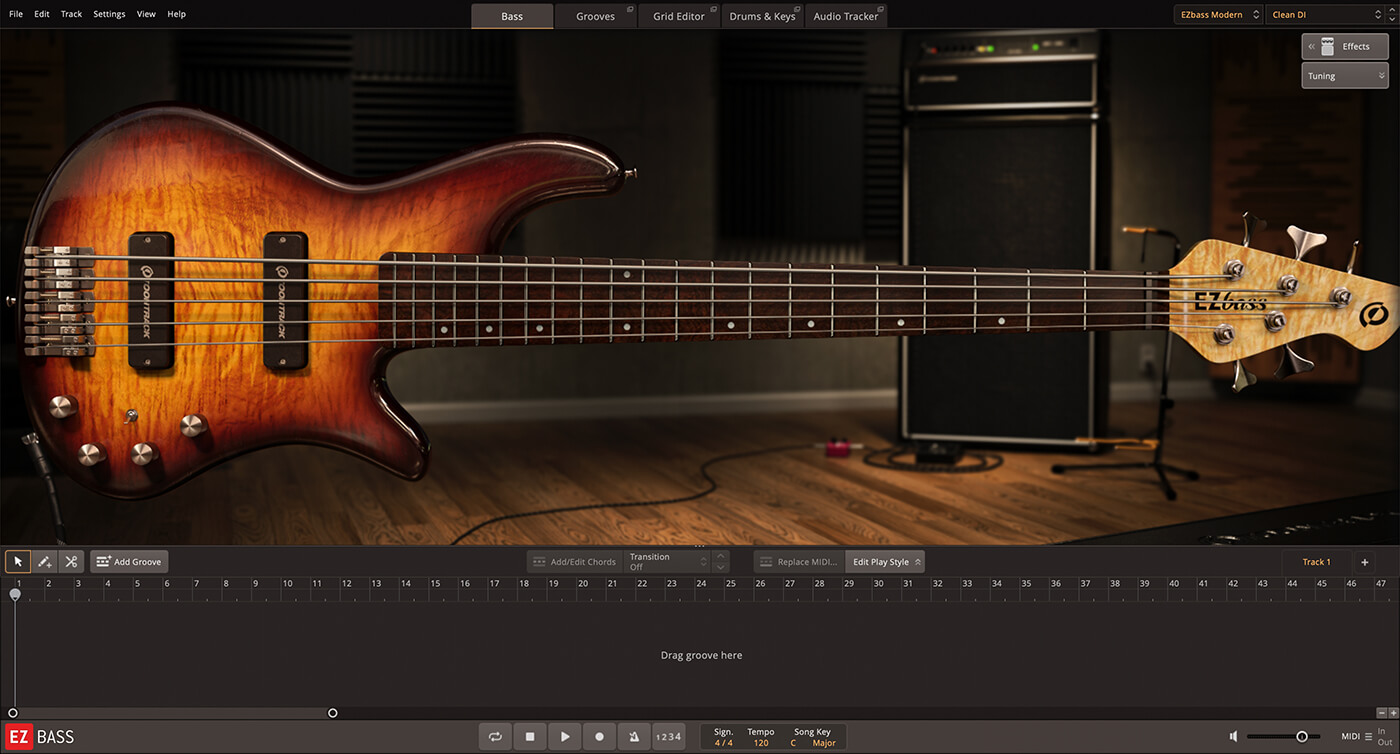 In line with other EZ products, this package ships with a wealth of MIDI-based content. Organised via style and genre, you’ll find everything from simple rock-based single-note repetitions to jumping octaves, as well as walking and funk-based slap basslines. It’s possible to alter this content and exploit the plug-in further too. EZBass allows for easy auditioning, and key and chord selection. You can drag and drop files onto tracks within your DAW too.

Working purely within EZBass is also an option. Using its Song Editor, found at the bottom of the plug-in window, it’s not only possible to build complete songs but also dictate their harmonic roots. Double-clicking any of the root names will open a wheel of notes, which allows you to swiftly alter the harmonic centre.

There’s also a grid editor, should you wish to get further into note editing. Here, you can select a note event and alter its articulation, an essential tool if you want to increase the realism of these elements. At this stage, you can also create realistic slides and swoops that reflect all manner of play styles. The level of detail and potential for editing cannot be overstated. EZBass sounds sensational right out of the box but, spend some time programming your own material, and you’ll be rewarded off-the-charts realism. 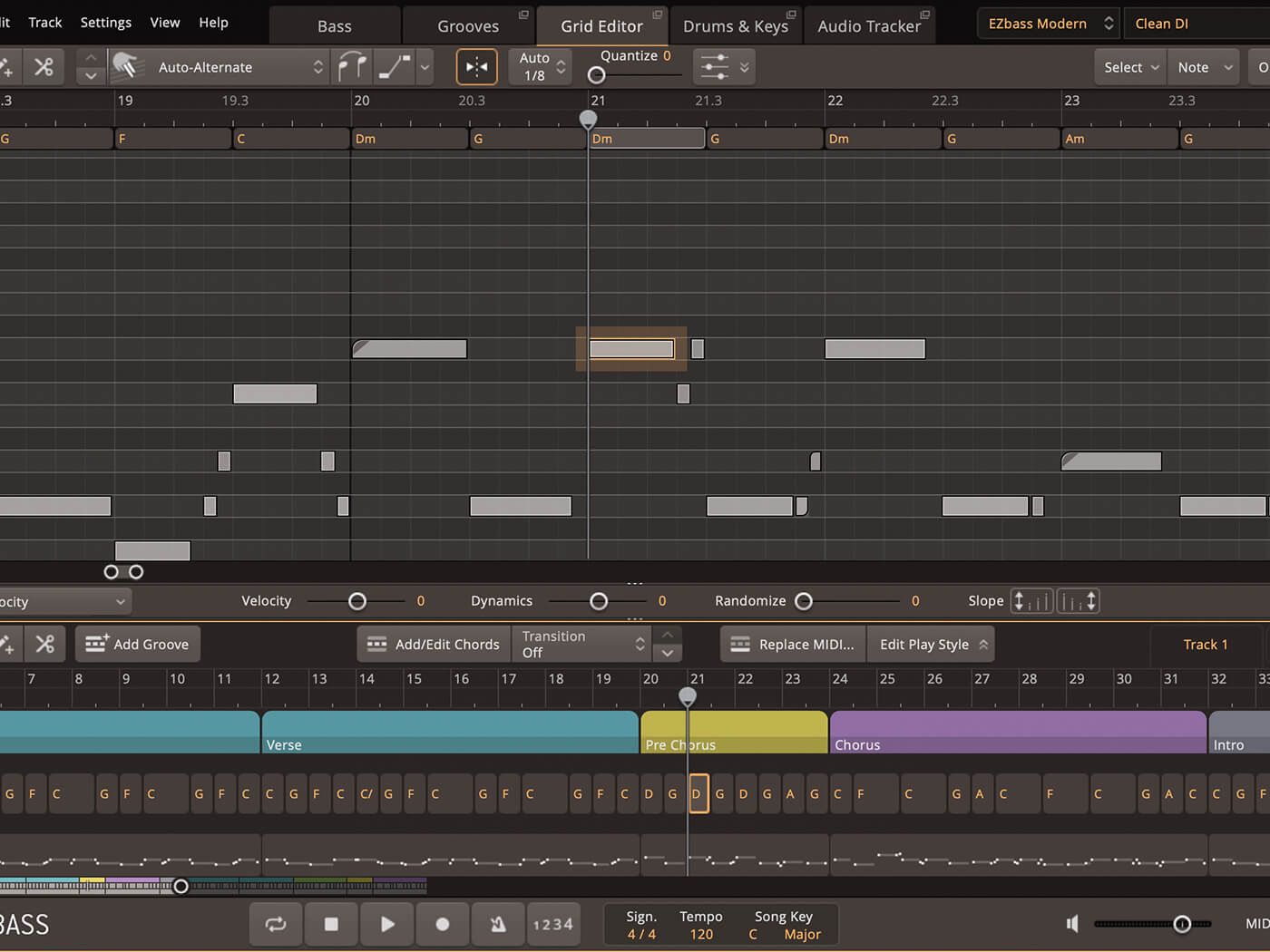 The technology behind Toontrack’s plug-ins remains incredibly clever, which won’t come as a surprise to anyone who has used the Swedish maker’s products before. The company has a convincing track record for accessible and intuitive but complex, in-depth and powerful plug-ins. EZBass falls into all those categories too.

Perhaps best of all, though the level of control available through MIDI is impressive, it’s also possible to play in audio via a live instrument, which can then be converted to MIDI, even compensating for inflection and articulation. 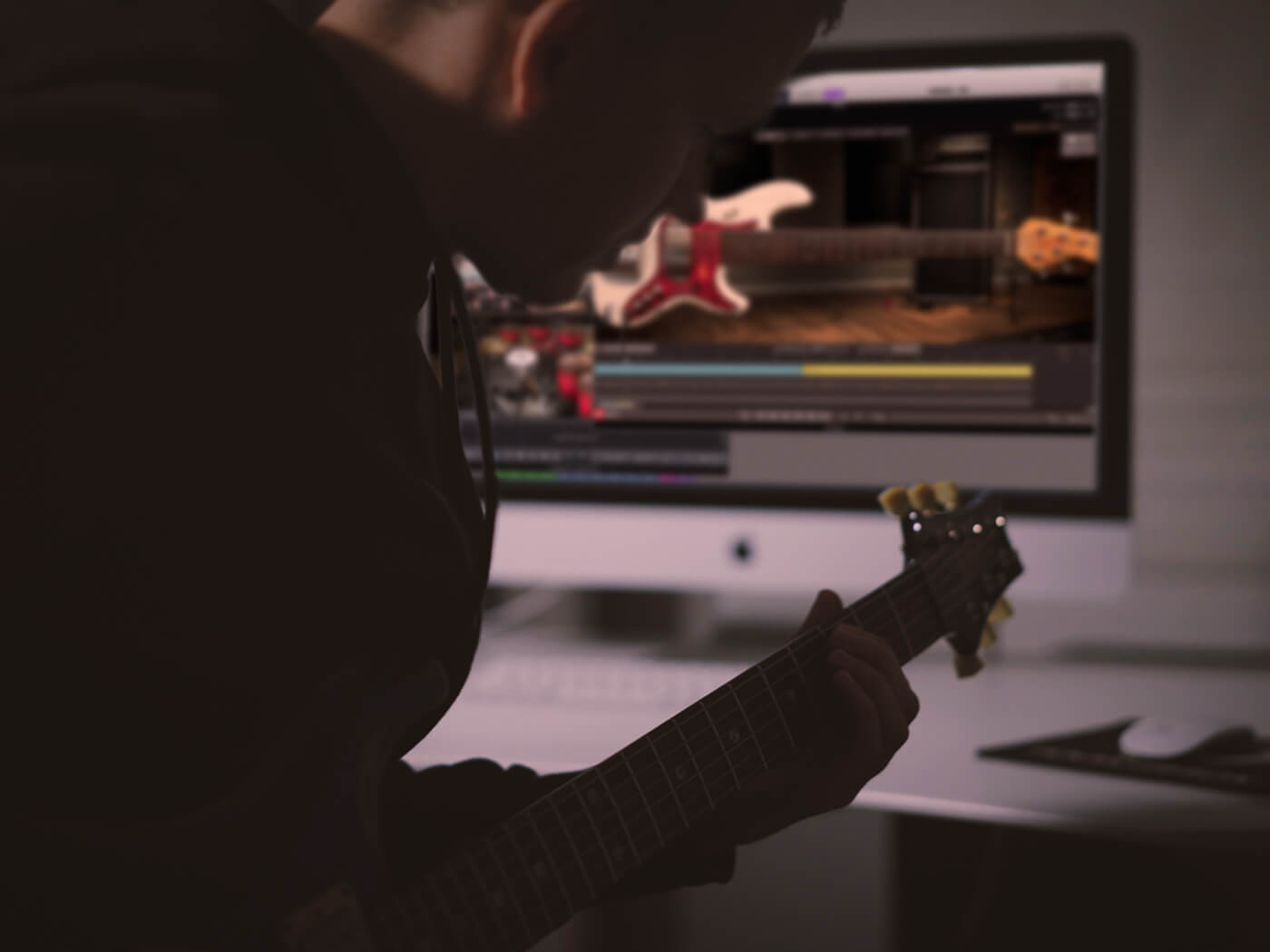 Many solo musicians and otherwise find themselves in need of bass guitar. If you’re one of them, and you like that low end to wind around tasty grooves, EZBass will be a huge boon to your collection. With only two bass guitars, it’s somewhat limited sonically. But maker Toontrack is well known for adding expansion packs to their products, so expect further additions in the future.

Both the sampled and MIDI content are usable on many levels, and if anything doesn’t fit your harmonic progressions, rest assured that editing comes easily and effectively either within your DAW or within the plug-in itself. With time and effort, and once in a mix, these bass guitars are sure to sound convincing. Once fleshed out with further bass guitars and grooves, EZBass may well be indispensable. 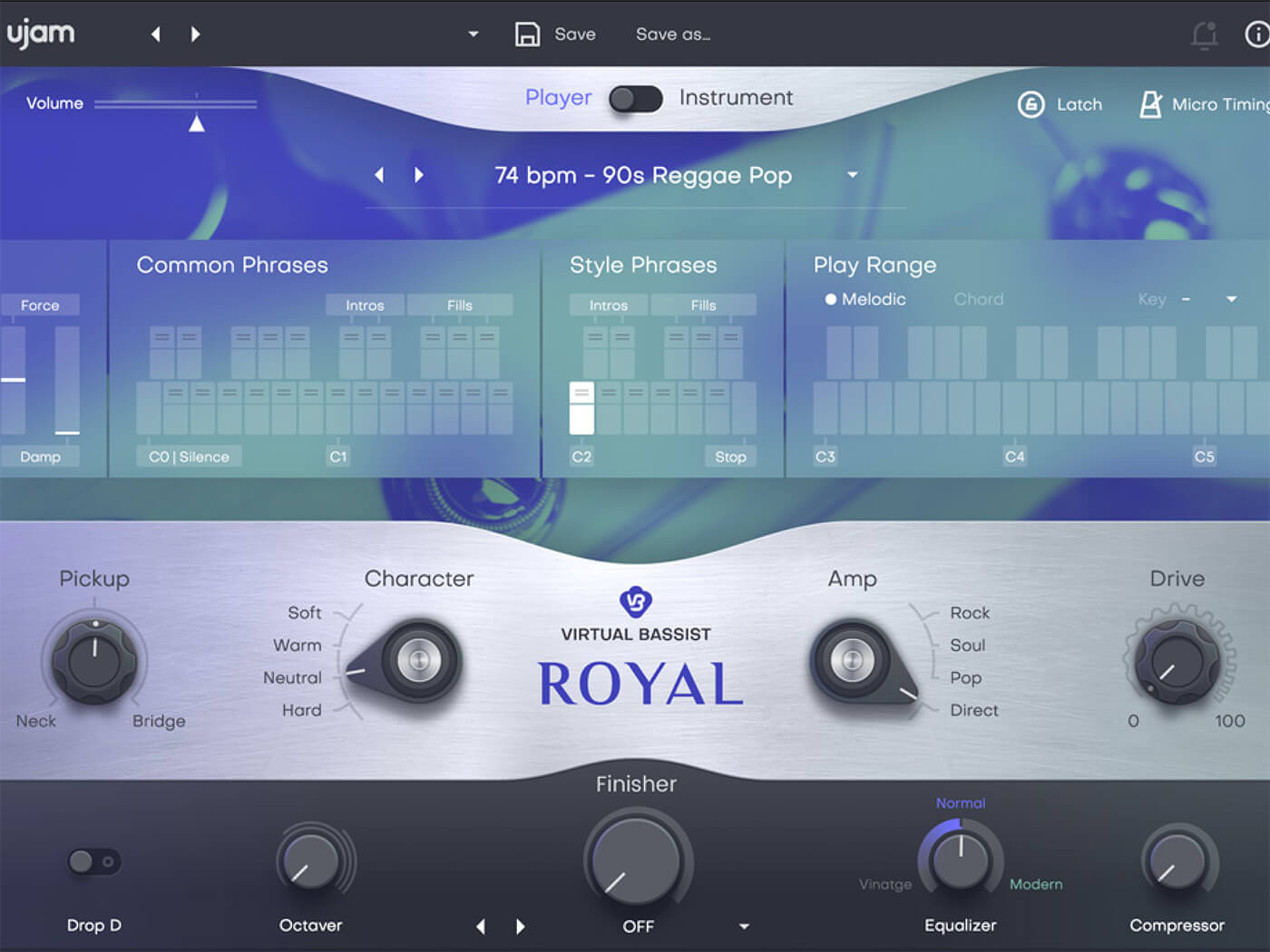 From the company that reinvented the Virtual Guitarist comes the Royal edition of Virtual Bassist. Similarly packed with MIDI content, this package offers the cleanest of the samples, which can be combined with other packs to create a large and comprehensive bass library. 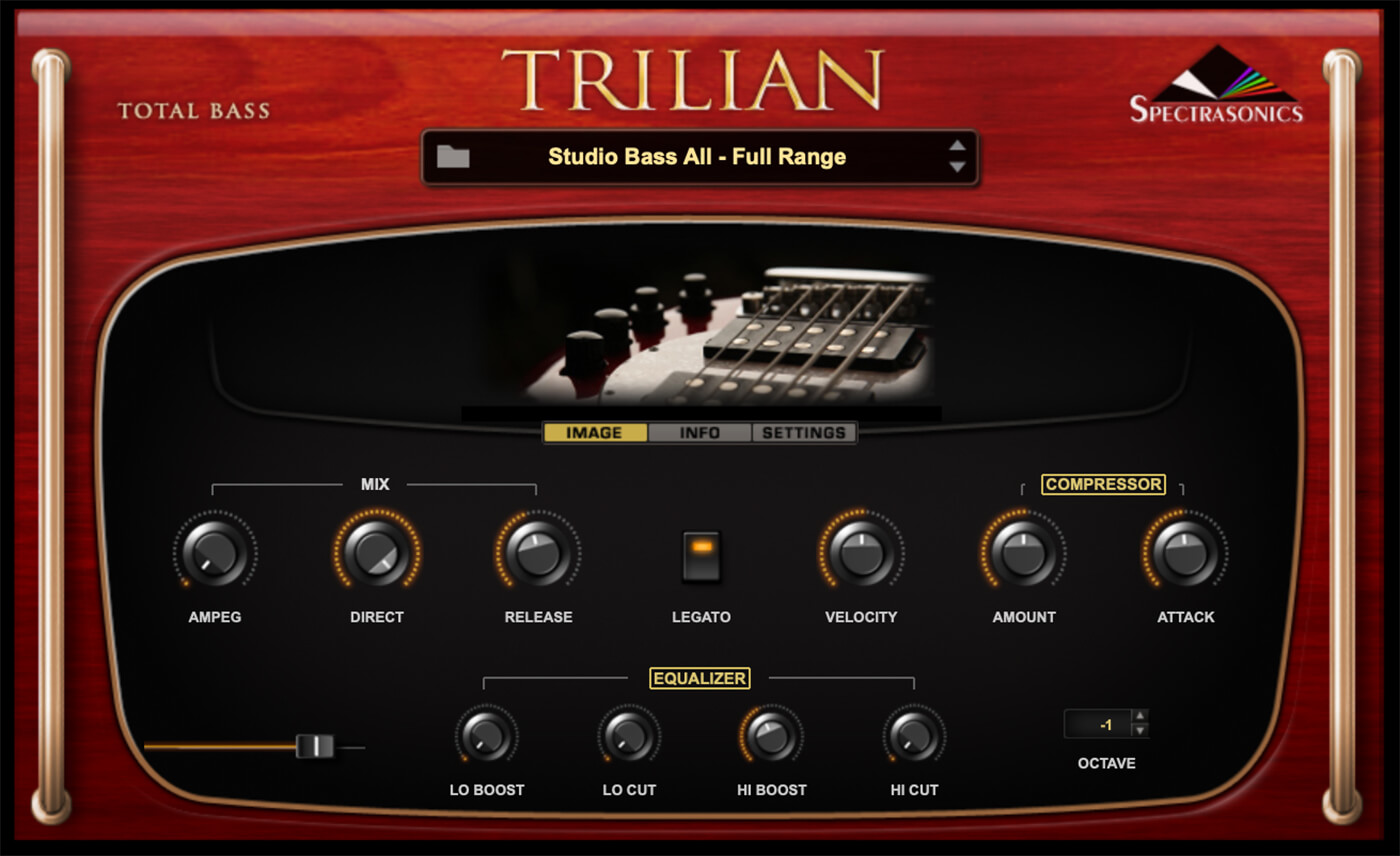