Spread your wings. This high-flying Icarus update has yielded one of the most quirky and enjoyable synths of recent memory. Just don’t get to close to the sun. 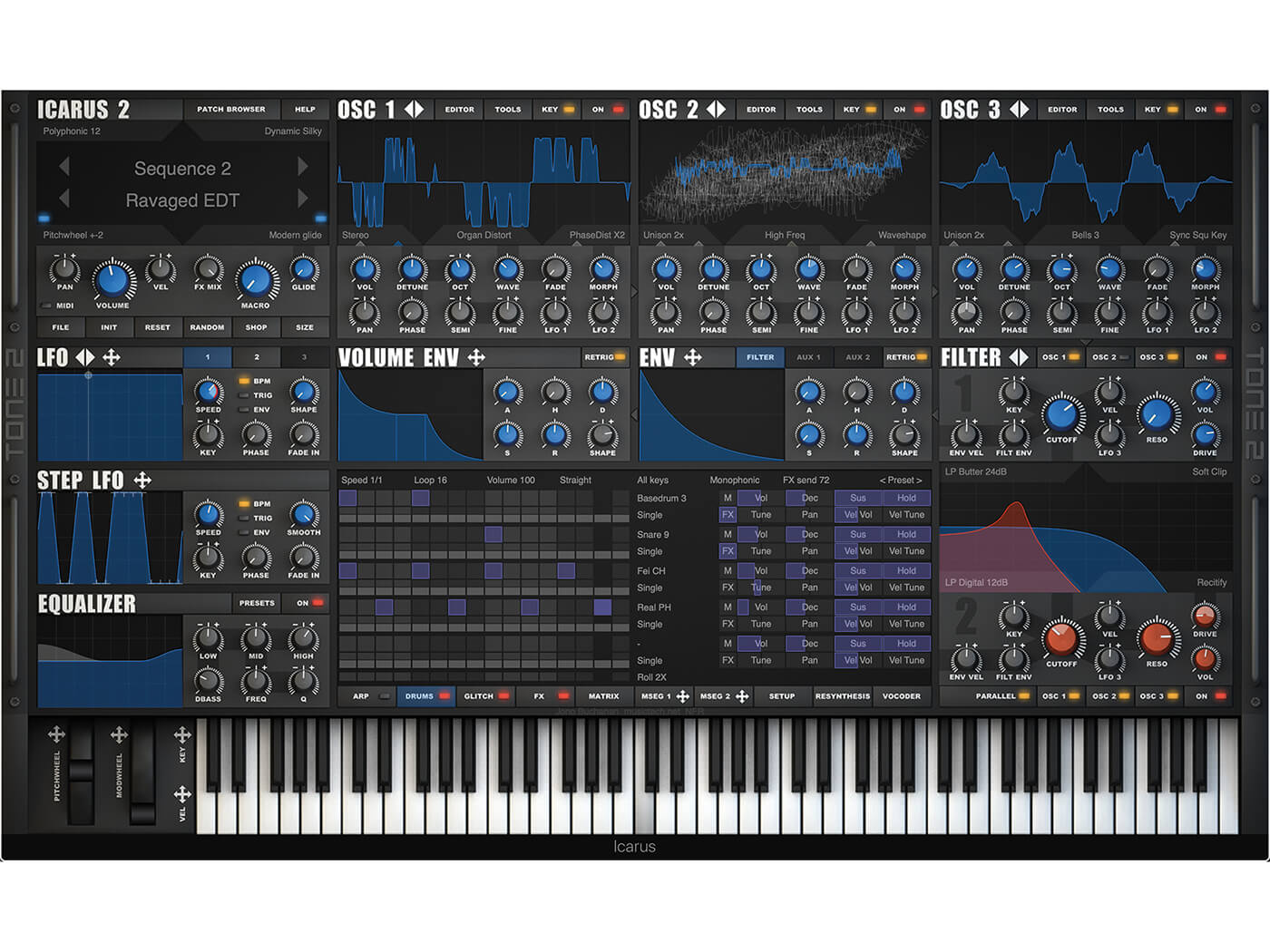 For a while from the late 1980s onwards, the manufacturers of new digital synthesizers were embroiled in a sonic skirmish redolent of mastering’s loudness wars. If one maker produced an instrument with a massive-sounding first preset, its rivals had to go bigger and bolder. Eventually, the workstation era of synths allowed you to hold down one key to trigger layered sequences, basslines, rhythms and textures all at once.

Impressive? Sure. Musically worthwhile? Not so much. To get something musically useful out of these instruments – and to build something you could truly call your own – you had to find out how to turn 90 per cent of their features off.

We had a brief flashback to those days when we fired up Icarus 2 for the first time. Load up its initial patch and you’ll hear a computerised voice that says, ‘Welcome to Tone 2 Icarus’, alongside a resonant pad and swirling white noise. It’s as if you’re being prepped for a massive Las Vegas-style EDM drop or to blast off into space. Impressive? Sure. Musically worthwhile? Let’s find out. 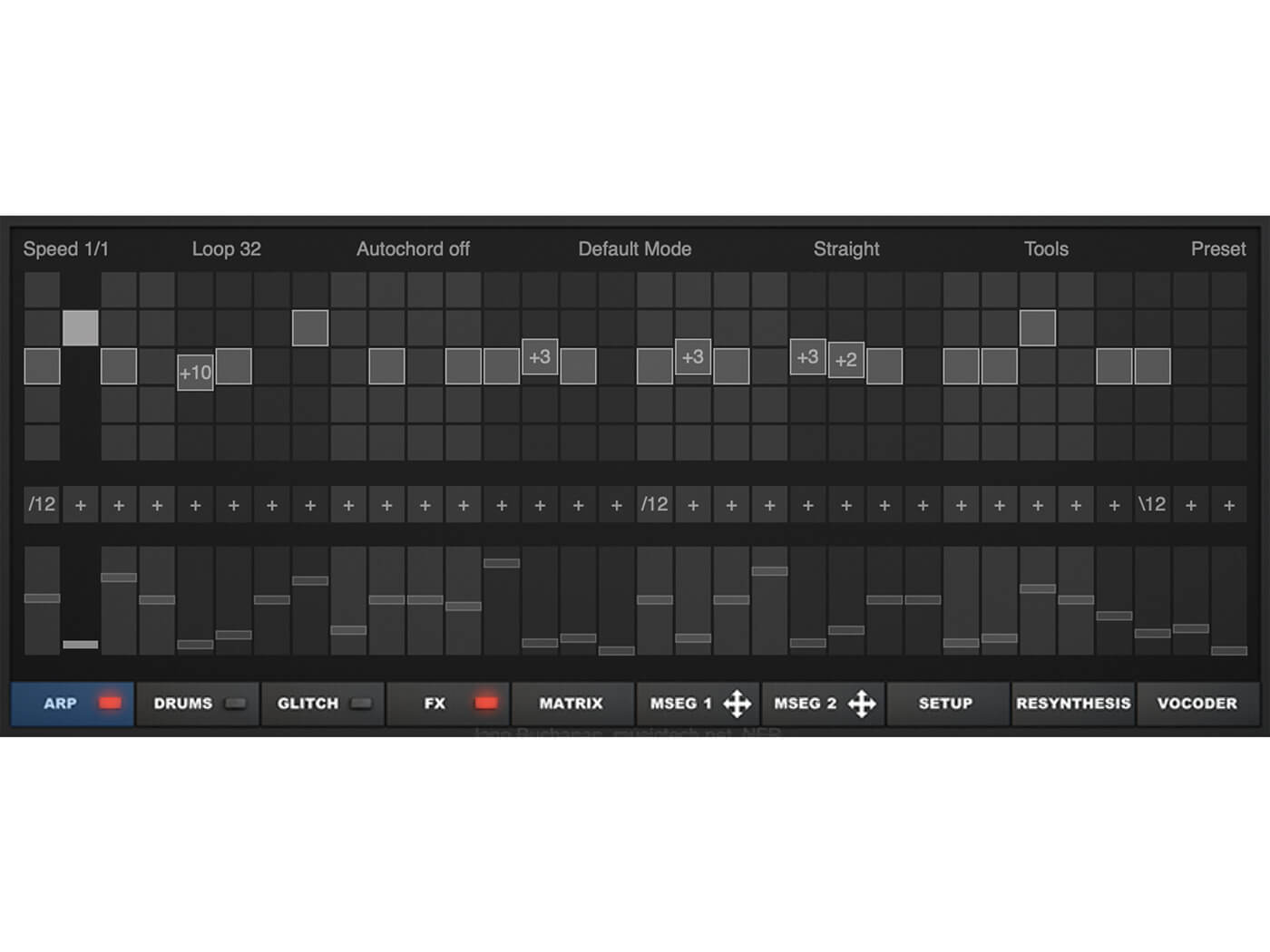 Set a course for the sun

As its name suggests, the Icarus 2 is the second iteration of an already powerful instrument. Tone2 refers to Icarus 2 as a 3D wavetable synthesizer. Its primary synthesis approach allows you to blend waveforms, either from those offered directly within Icarus 2, drawn from scratch or created from imported audio files. But producing new sounds inside Icarus 2 doesn’t end there. Alongside wavetables, the synth offers comprehensive yet user-friendly resynthesis techniques, hypersaw oscillators and even a vocoder (which lets you load an audio file as a modulator) among a number of other synthesis starting points.

To tweak or create sounds from scratch, start by choosing a wave(table) type from the central tab above oscillator 1’s controls. Some of these are straight-laced waveforms, others are wavetables. You can then choose a play mode from the tab to the left of this, and select exactly how that oscillator will be played.

Among the mono and stereo approaches you might expect, this is where you’ll find options such as chords and hypersaw, which offers multiple detune arrows that you can spread or narrow for more or less detune. If you’ve selected a wavetable, the Wave dial lets you cycle through its index of waveforms, while the Morph dial allows for further processing and is new to Icarus 2.

Above the dial itself is a tab to select a Morph mode, which affects how the oscillator addresses your selected wavetable. Think of it almost as a filter through which the waveform is seen. Having picked a Morph mode, you can select the amount of morphing you want to do with the dial or modulate this from any of Icarus 2’s extensive modulation-mapping options. It’s also possible to use an audio file as a processor for creating new wavetables, or map the audio file you’ve loaded as a vocoder signal into one of these slots. Across the three oscillators, the options are extraordinarily deep. Thankfully there’s an on/off button to help you audition oscillators in isolation. 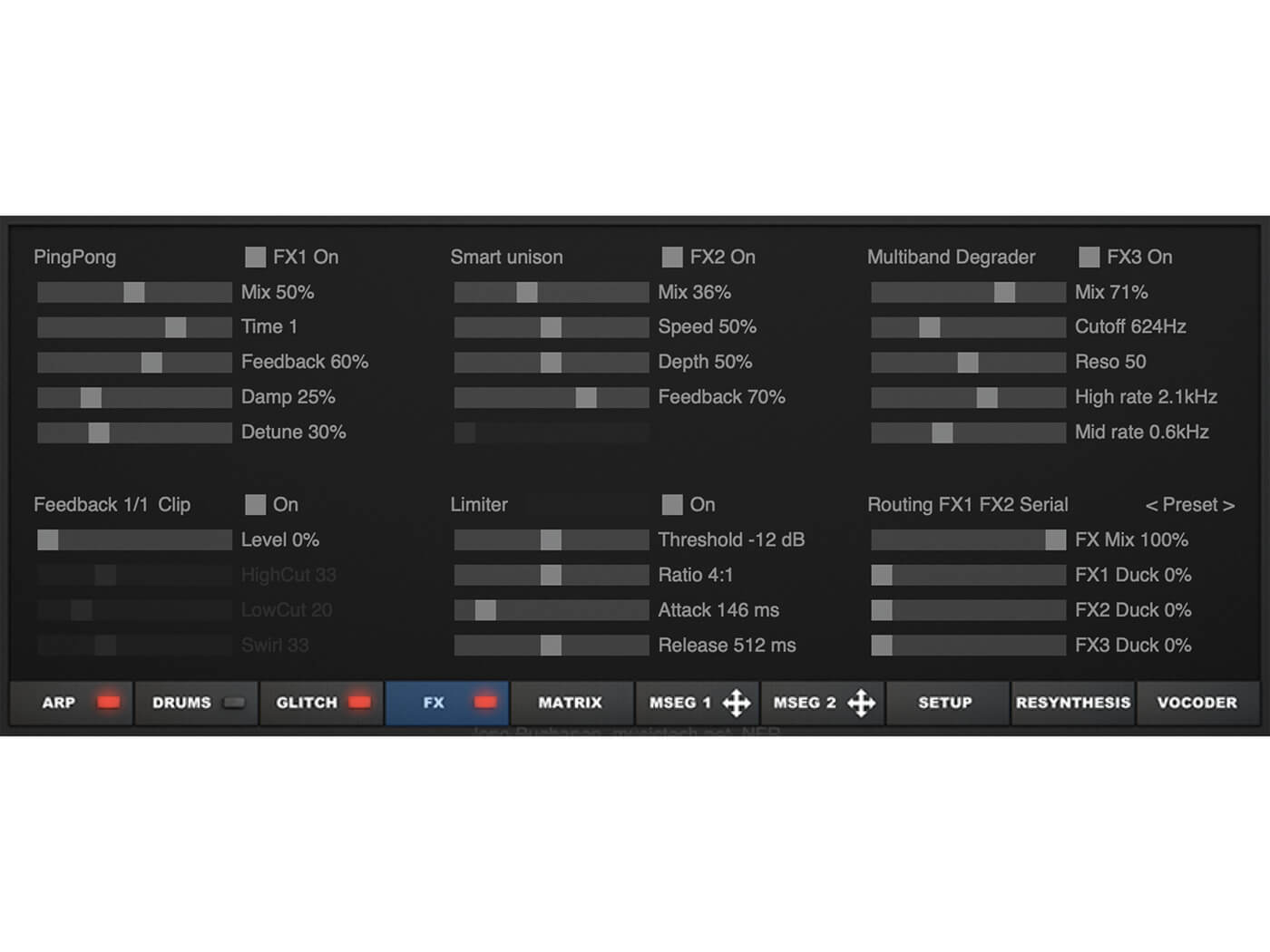 Once you’ve created your sonic building blocks, you can get started with the plentiful sound-shaping tools. Twin filters are found to the right-hand side of the interface, with a staggering 62 filter types organised into folders. Alongside the low-pass, band-pass and high-pass options, there are comb, fractal, ring-modulation filters, physical modelling options and more besides. The filters can be routed in series or parallel, and the shared display for these nevertheless keeps things simple; filter 1 is blue, filter 2 is red.

Buttons at the top of the filter pane let you route each oscillator (or not) individually. Much of the rest of the display is given to modulation sources. There are dedicated volume and filter envelopes, as well as freely assignable auxiliary ones (all AHDSR), three regular LFOs, as well as a step LFO that provides syncable per-step offsets of any parameter you wish to assign. 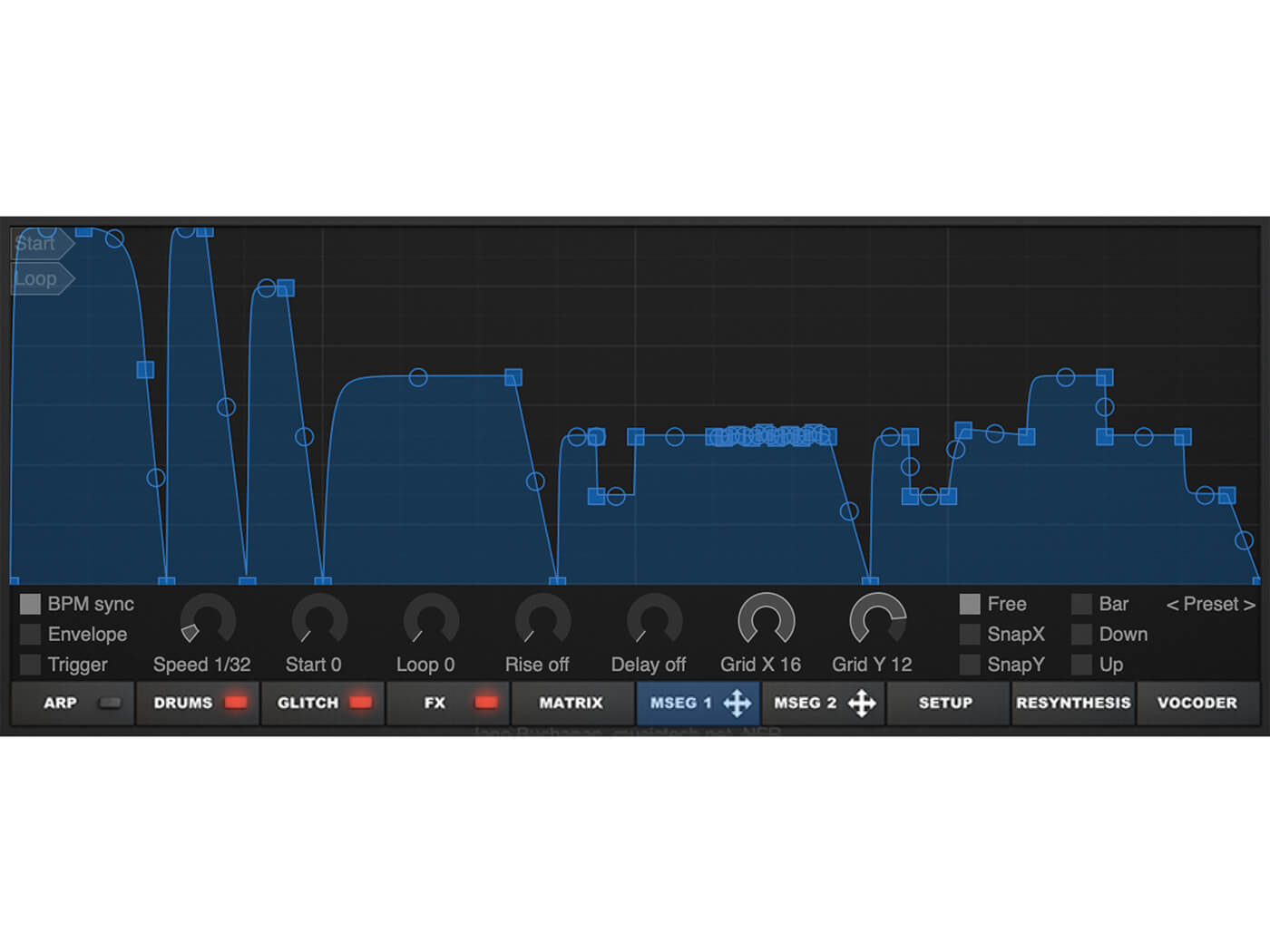 Is this a workstation?

MSEGs can be clocked to tempo (and looped), and they’re a key reason why Tone2 is billing Icarus 2 as a workstation. The capabilities of the MSEG options are best demonstrated by the sound bank entitled 1 Key Hold, and while we have reservations about the nature of patches such as this one (please refer back to our introduction), they certainly have potential.

If you’d rather focus your attentions on a single sound at once, the sound design options afforded by the MSEG sequences can be just as satisfying. Bolstering Icarus 2’s position as a workstation are its comprehensive arpeggiator and brand-new drum sequencer. The arp has a nice design, letting you click in boxes to enable a note then drag each step up or down to create pitched variations.

Below each pitch is a velocity offset, with arp velocity a freely controllable source within the modulation matrix. The drum sequencer lets you load up to five short WAV sound sources, and these stand aside from the other sonic generators within Icarus 2, meaning you’re not sacrificing waveforms in the oscillator stages to incorporate drums.

To the right of each lane of a programmed drum pattern are volume offsets, and decay, sustain and hold panes, while each single hit can also be swapped out for an assortment of other options, all of which buzz and glitch depending on the source material. Speaking of glitches, there’s a dedicated glitch sequencer too for the creation of running sequenced spot effects, such as repeats, gates, pan and filter offsets, distortion tricks and more, all of which can be looped too.

Icarus 2 also has a comprehensive array of effects, including reverbs, delays, choruses, flangers, phasers and distortions, making 54 effect types in total. It’s a fully loaded instrument plug-in. But who is it for? We feel that the workstation approach has less going for it now than it did back in the hardware synth days.

Almost everyone who buys Icarus 2 will run it within a DAW with a more comprehensive drum sequencer, for instance, rendering this part of the interface a fun tool but perhaps extraneous for many. However, for EDM producers and sound designers, there’s an enormous amount to get your teeth into here. We enjoyed what we found once we got past the one-key-triggers-all approach to the first collection of presets.

If you’re looking for a synth that offers incredible levels of synthesis flexibility, a powerful arpeggiator and break-point envelope modulation routing, Icarus 2 certainly has the wings to help you fly. 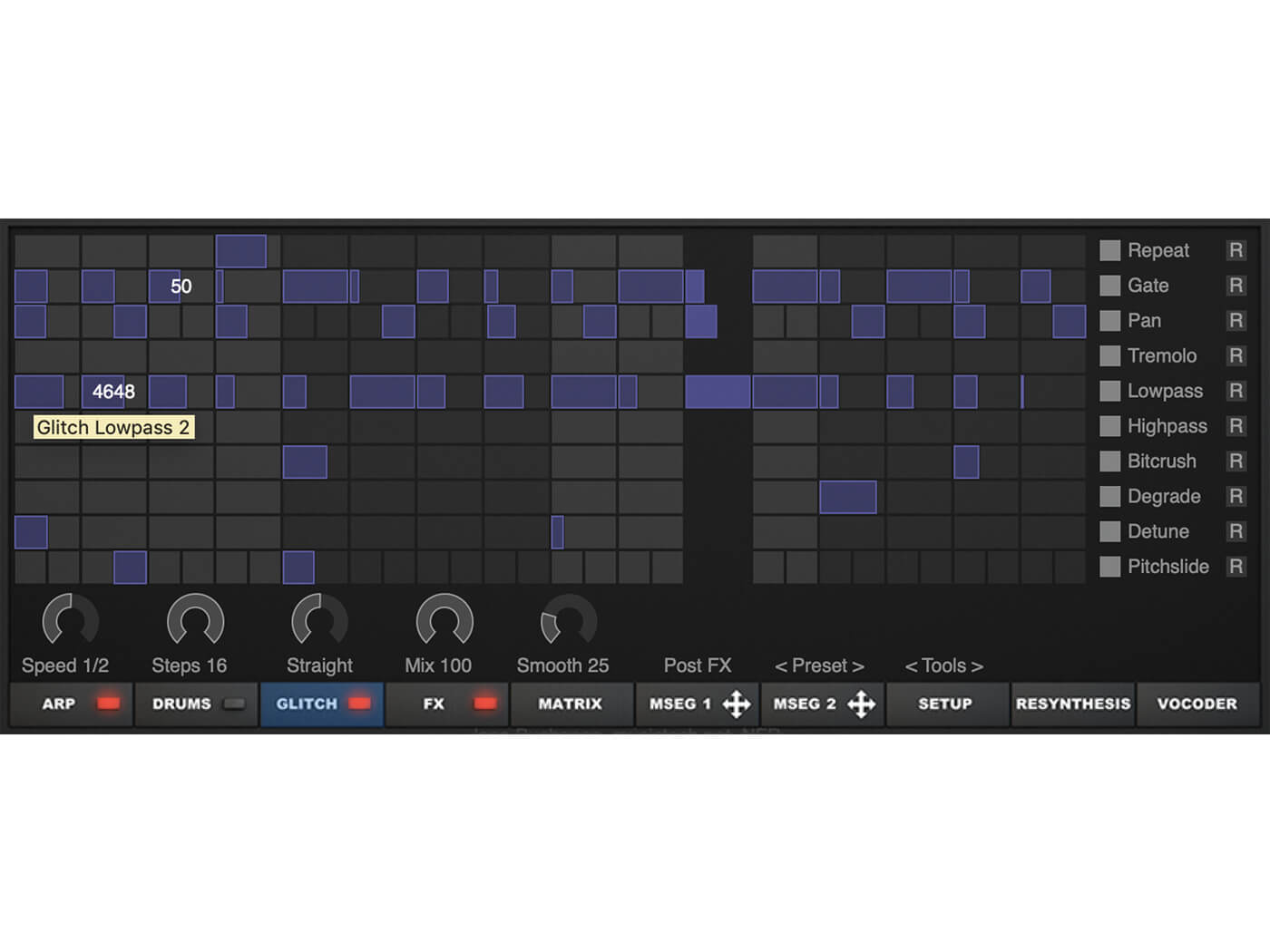 Icarus 2 sounds huge. It has a sonic personality all of its own, with a hyper-real tone that should tear through any mix. But is that a quality you want for your music? We’re loath to make genre-specific generalisations but if you’re making main-room EDM and you want leads, basses and sequences aplenty, you’ll find a lot to like here. But if you prefer to build music from subtler strands, you’ll find yourself dialling Icarus 2’s dominant personality back to find its more nuanced capabilities. 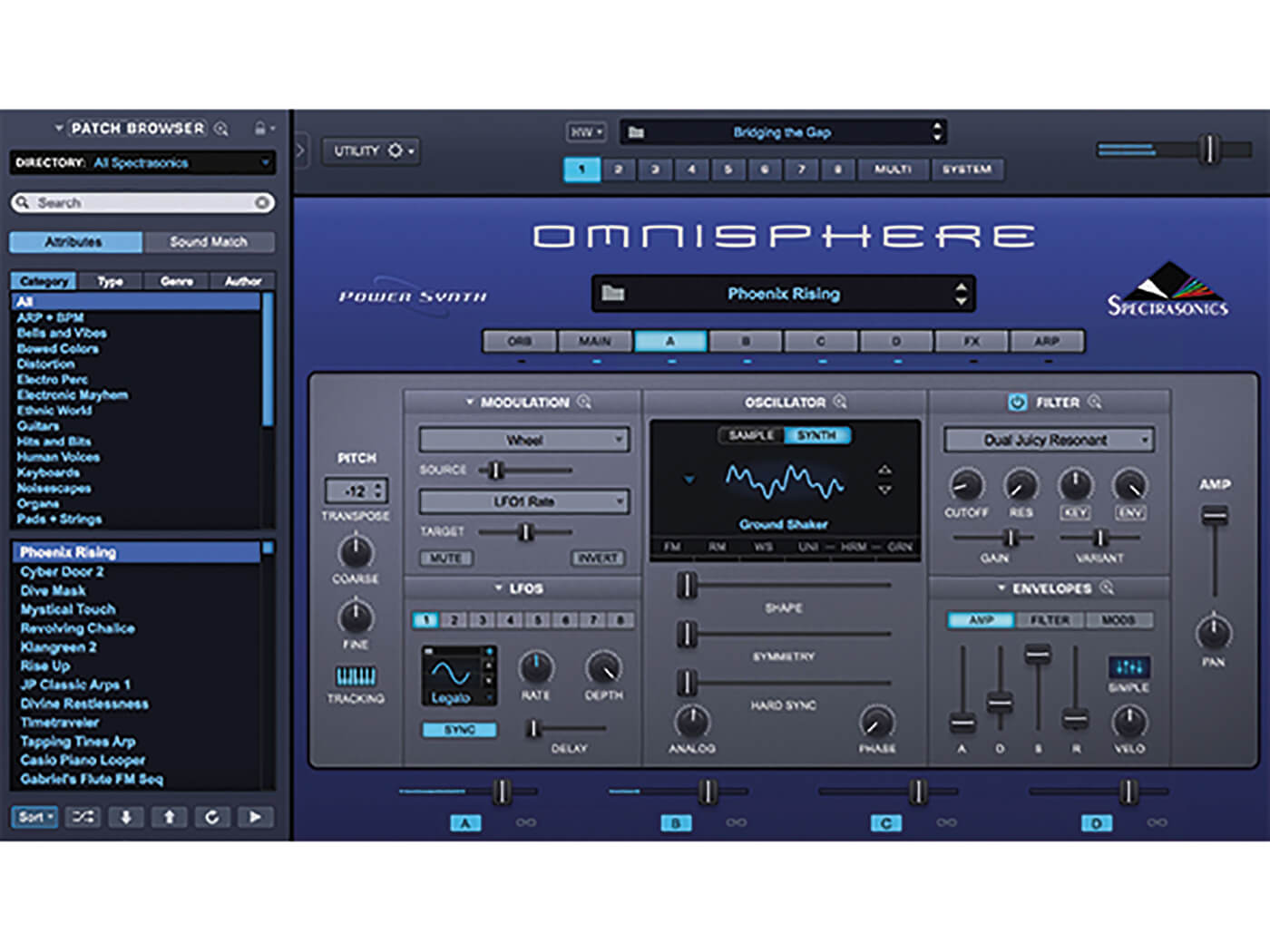 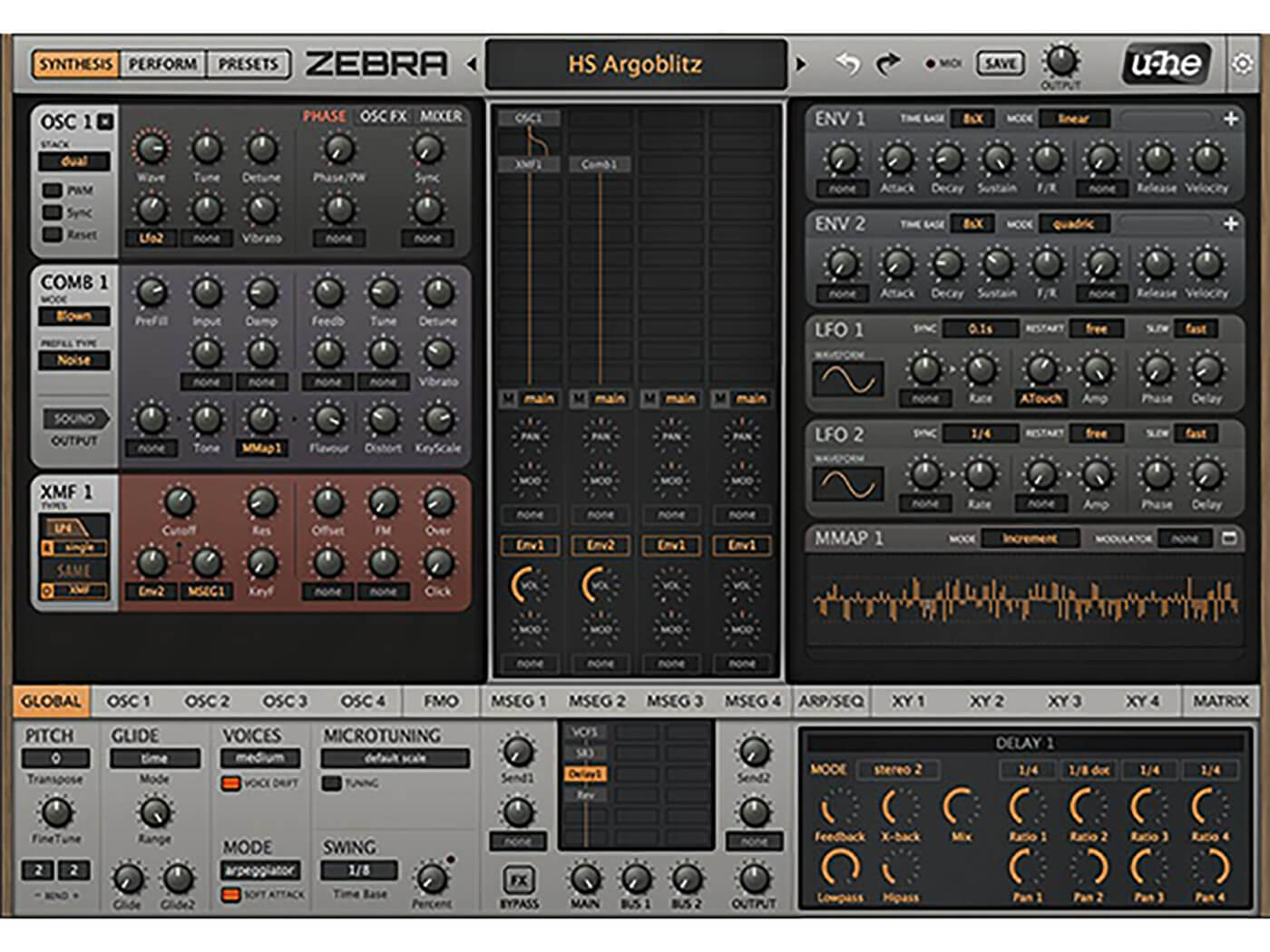 A favourite of soundtrack composers and sound designers alike, Zebra 2’s capabilities have some significant overlaps with Icarus 2’s, including wavetable oscillators and multi-stage envelope generators.