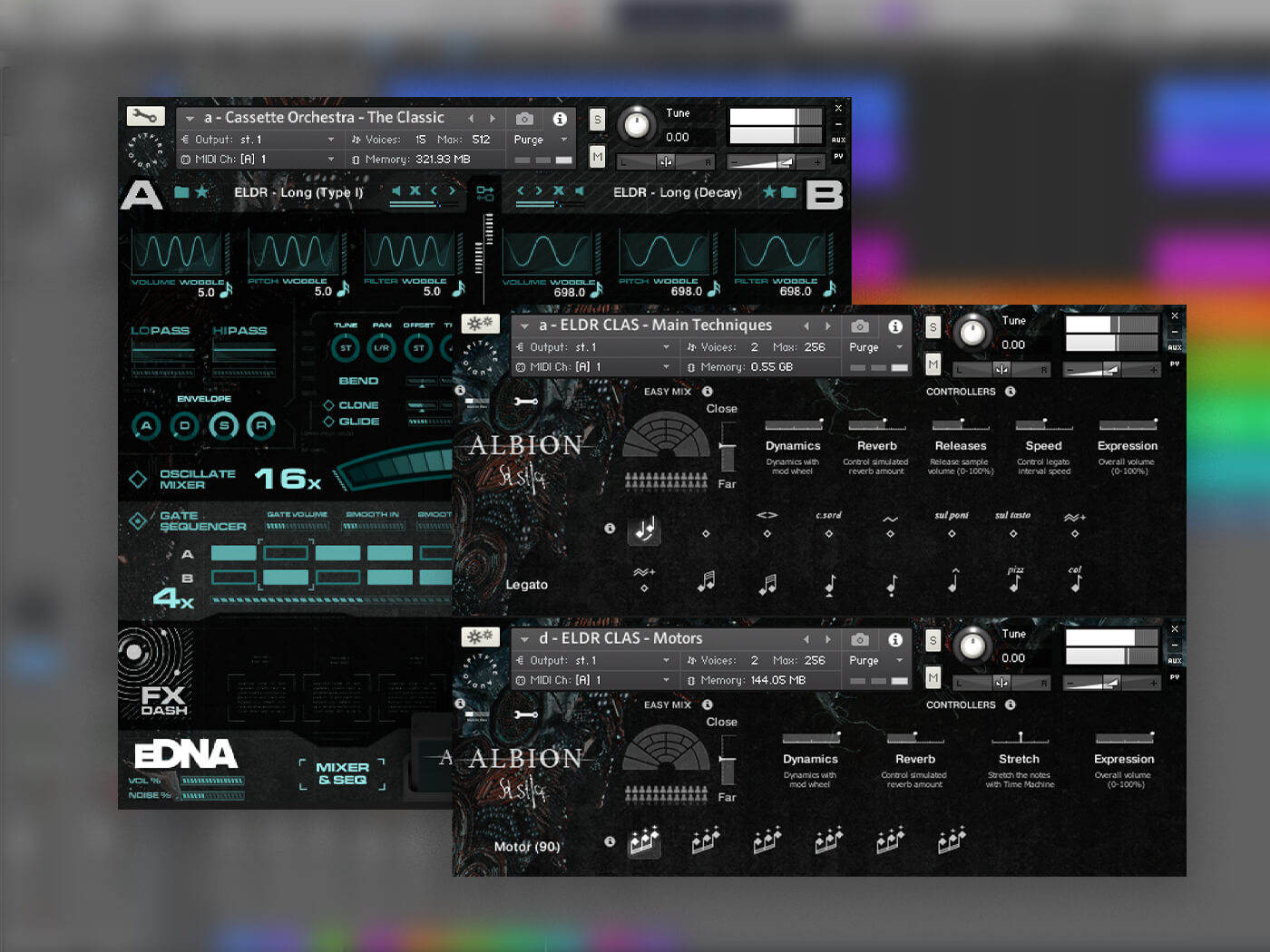 ⊕ Beautifully played and exhaustively sampled
⊕ Goes far beyond the ‘folk library’ sound you might be imagining
⊕ The Solstice Orchestra is awash with unexpected articulations and mic positions
⊕ The Cassette Orchestra’s processed pads, leads and basses are genre-busting
⊕ The Drone Grid can provide underscore and a sonic canvas all by itself

Pure, raw inspiration with a heart of folk. Expertly curated, lovingly recorded and gloriously processed, Solstice has a sonic personality all of its own. An unadulterated joy to compose with and play.

The original Albion was Spitfire Audio’s first commercial library. Both it and subsequent Albion-badged releases offer a complete sonic toolkit in one virtual box, with sounds from strings, winds, brass and percussion. Solstice is the latest Albion to bring a unique sonic theme to this blueprint, and its focus is not the traditional orchestral.

Solstice celebrates folk music traditions that are handed down by ear, rather than by notation. Accordingly, the samples are rawer, smaller, closer and more visceral. Folk players create the samples on instruments borne of ancient, mystical and – in some cases – downright terrifying origins, all recorded at Castlesound Studios, just outside Edinburgh. 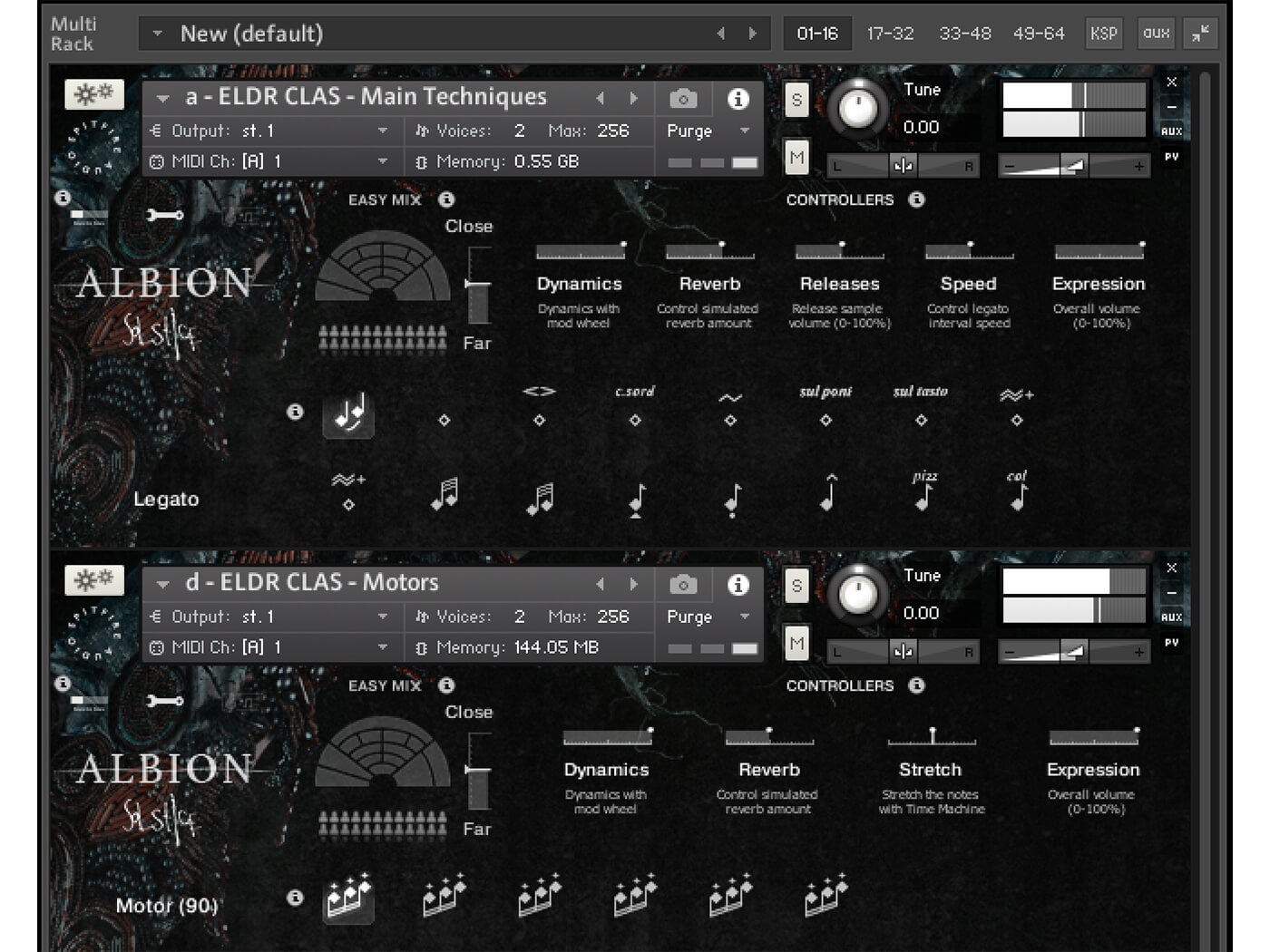 There are three sound category folders at the root layer of the library: the Solstice Orchestra, the Cassette Orchestra and the Drone Grid. Inside the orchestral folder, the names assigned to groups of instruments are evocative, starting with the strings collection, The Elders. There is a more ‘standard’ octet line-up of players and a separate, more intimate ‘folk-traditional’ sextet group, and both are replete with many articulations.

In Spitfire tradition, multiple microphone sources are available per patch. The most notable and suited to the source material is a collection of DPA clip-on mics that provide a super-close signal for new layers of intimacy.

The playing techniques in Solstice set the tone; patches are rawer and gutsier, with playing techniques you’d associate with noir drama, whether medieval or modern. The predominant theme through these sounds is inherent movement. For example, there’s an occasional flickering pitch, or ‘interrupted volume’, as each player reaches the end of a bow stroke and changes direction. That movement makes the samples feel alive with playability and emotional implication; they’re on edge, they’re never plush or settled. As a result, they’re perfect for scoring.

In addition to the legato, long and staccato patches you might expect, there are also more evocative ones. These are labelled Sinister, Tremolo Scattered and Long Artisan, and all surface different kinds of movement, different harmonic overtones and a palette of inspirational ideas. There are separate patches of Evos (long, sustained, evolving sounds), Effects (glissandi and chord clusters) and Motors. The last of these provides repetitive playing styles which lock to tempo in 1/8ths, 1/16ths and triplet patterns. The Ensemble strings are accompanied by the Elder Bass, a solo string bass collection of performances offering complementary playing techniques to the main string libraries. Elder Bass is rich and deep, and it’s extremely helpful to have separated from the main string ensemble.

The Callers is the Brass and Winds section but, as you’d have expected, with a difference. There are saxophones (soprano and baritone), clarinet, tenor trombone and tuba, all of which provide a rootsy, grounded tone. Again, there is a wide range of articulations, with the Effects, Evos and Motors from the Elders folders mirrored here.

The Mystics offers a haunting combination of flutes and whistles, which immediately brings to mind John Powell’s Celtic scores, but could easily provide a folk-horror tinge if you were looking for something terrifying. The short patches and the wonky ‘Flickering’ techniques are of particular note. 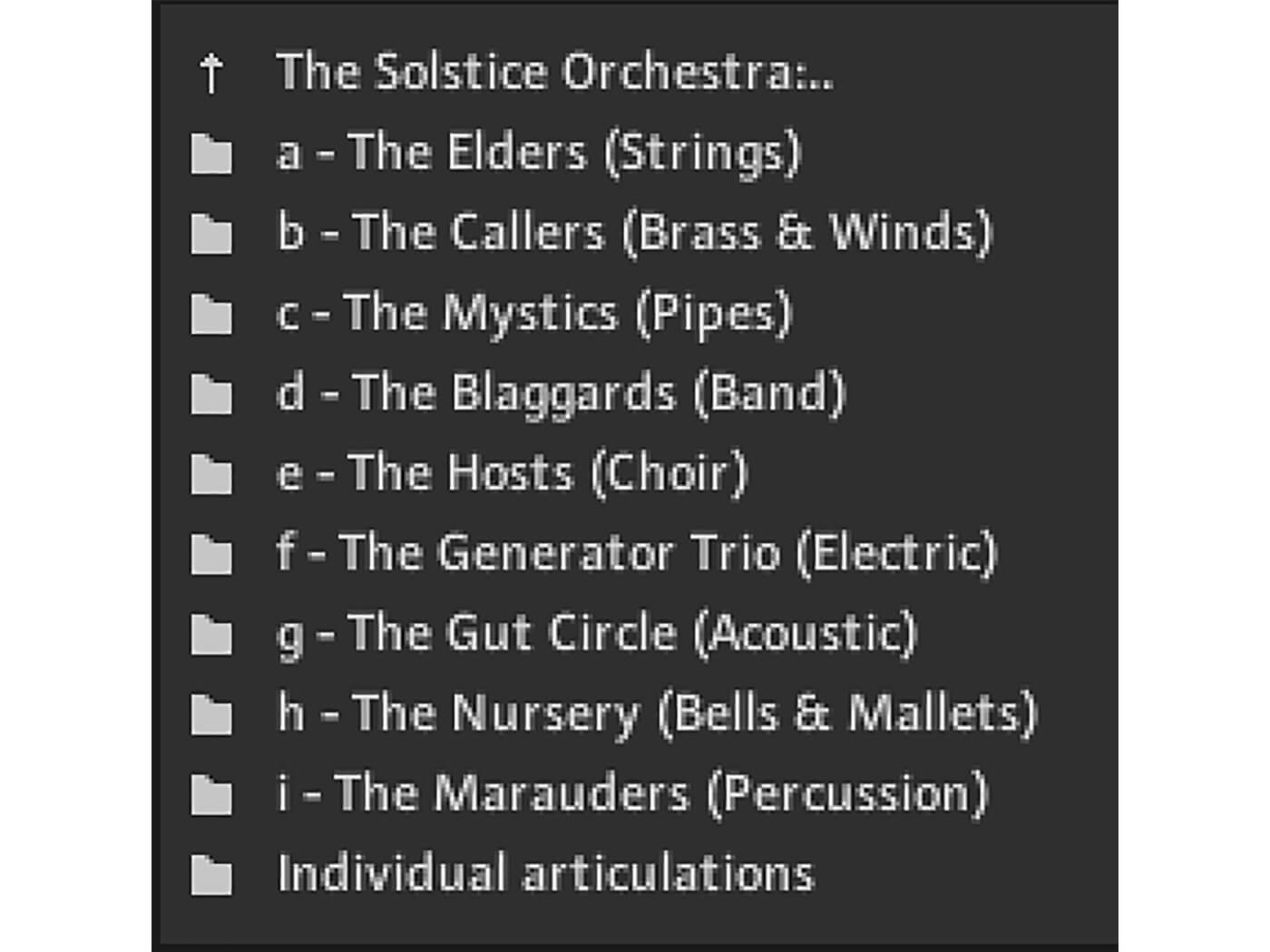 The Blaggards is a series of patches based around a virtual band consisting of Hurdy-Gurdy, Bass Harmonica, Nyckelharpa, Harmonium and more. There are unison patches that provide ‘instant folk’, and separated drone, plucked and string patches to allow you to pare back the full band to just the elements you need.

The Hosts offers a series of 6-voice Celtic choir patches, and these are an extraordinary and welcome addition. Alongside the ‘Ah, ‘Eh’ and ‘Mmm’ patches you might expect, there are some beautifully flickering and cluster-based additions that are seduction embodied. If you need a choir that behaves like a pad, the ‘infinite’ (looped) patches are especially appealing, but there are natural-length patches too.

The Motors and Effects in this section are something else entirely; gentle undulating repeats bring to mind the minimalist masters and some terrifying glissandi and effects tailor-made for darker moments. The Generator Trio blends two electric guitars with one electric bass; the first patch is an almost DI’d, clean instrument just waiting for the amp simulators and effects pedals of your choice. Then come Tremolo patches at two speeds, E-bow sustains and a whole range of evocative performance patches. These, too, are accompanied by Evos (re-amped drones which shift in and out of focus) and propulsive Motor patches, which are more aggressive and lock to your track’s tempo.

The Gut Circle is a blend of lead instruments with a more traditionally acoustic folk heart: ukuleles, mandolins and a blend of steel and nylon string guitars. And the sonic treats keep coming. The Nursery offers a quartet of tuned percussion sources, including vibes, celeste, dulcitone, glockenspiel, bike bells, hand drums and assorted found percussion. The result of the main patch is like a gloriously mechanical music box, but things can turn horror/dark very quickly with some of the more esoteric playing styles.

There’s plenty of percussion via The Marauders, another rootsy collection of drum and percussion sources across two kits. At the same time, The Visitor offers a separate folder of processed hits and grooves made in collaboration with veteran composer/remixer Andy Gray. 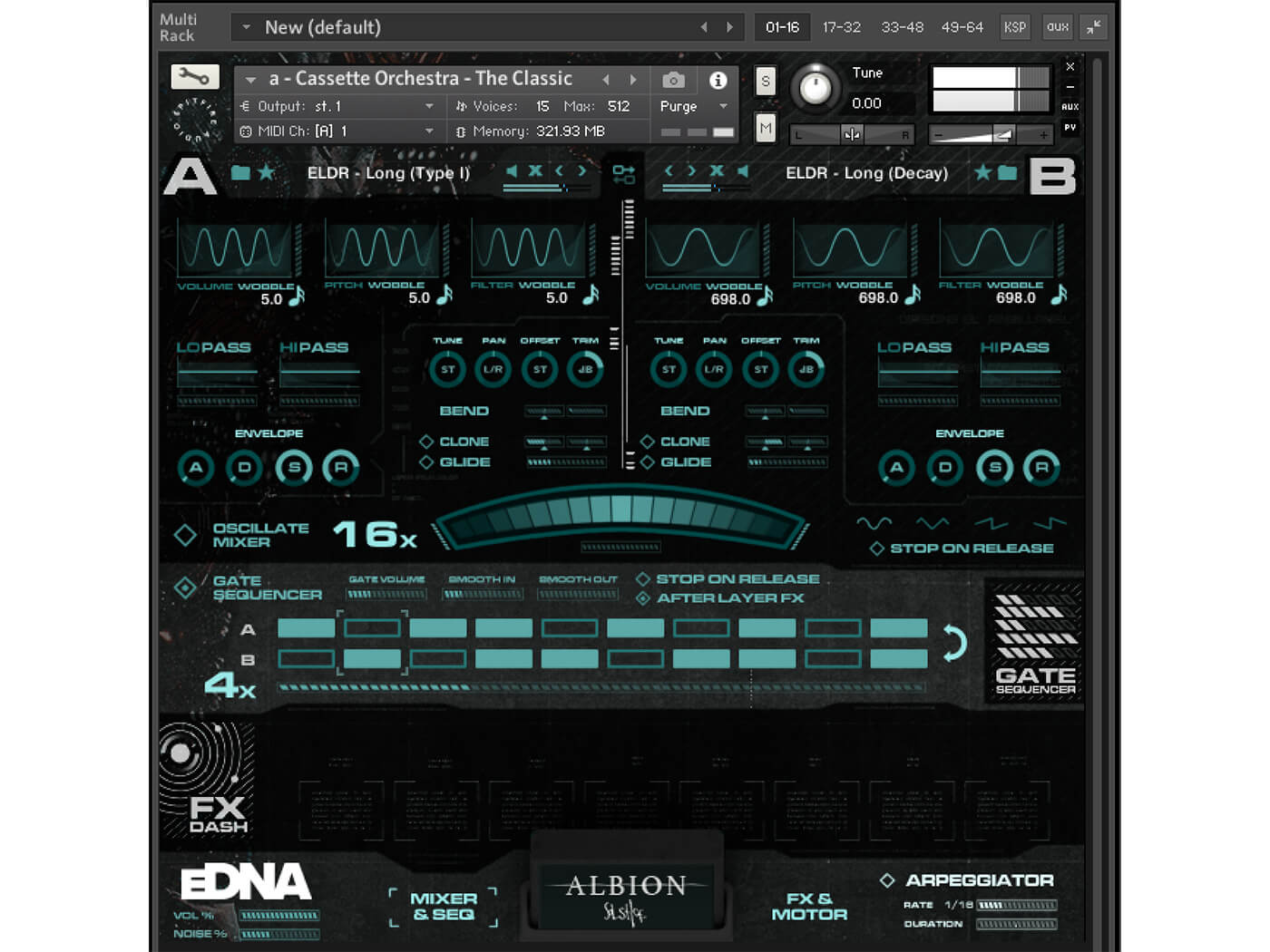 While the Solstice Orchestra represents the beating Albion heart of the library, it’s by no means the only content. The Cassette Orchestra is a collection of sounds based on instruments featured within the Solstice Orchestra, and re-sampled through a series of processors, including tape machines and effects pedals. This external processing comes into its own within the comprehensive Presets folder. The sample sources incorporate classic hardware synths, Eurorack modules and an outrageous chain of boutique signal processors. Detuned pianos, rasping synths, heart-breaking pads, etc. The sounds are diverse and glorious, and each one offers instant inspiration.

Although the flexible eDNA engine powers the Cassette Orchestra, the Drones use another Spitfire stalwart, the Evo Grid. This allows you to build drone textures with a variety of potential sonic flavours. Across a five half-step note range, you can assign an individual drone, so that multiple drones can be triggered across your keyboard. You can limit these to specific Solstice Orchestra sections, or mix and match from one instrument group to another. The drones are pure and sustained, or undulating and fluttery, raspy and scary.

If you’ve kept up with Spitfire founder Christian Henson’s YouTube channel, you’ll recognise that much of what he has been championing for the past few years is rooted deeply and personally in Solstice. In parallel with moving to Scotland and immersing himself in Scottish folk traditions, he’s been developing his Modular Mondays channel, exploring Eurorack and out-of-the-box signal processing, slowly but surely building a rig to die for. Now, all of these separate strands of sonic exploration have come together in 73GB of pure, inspirational wonder. 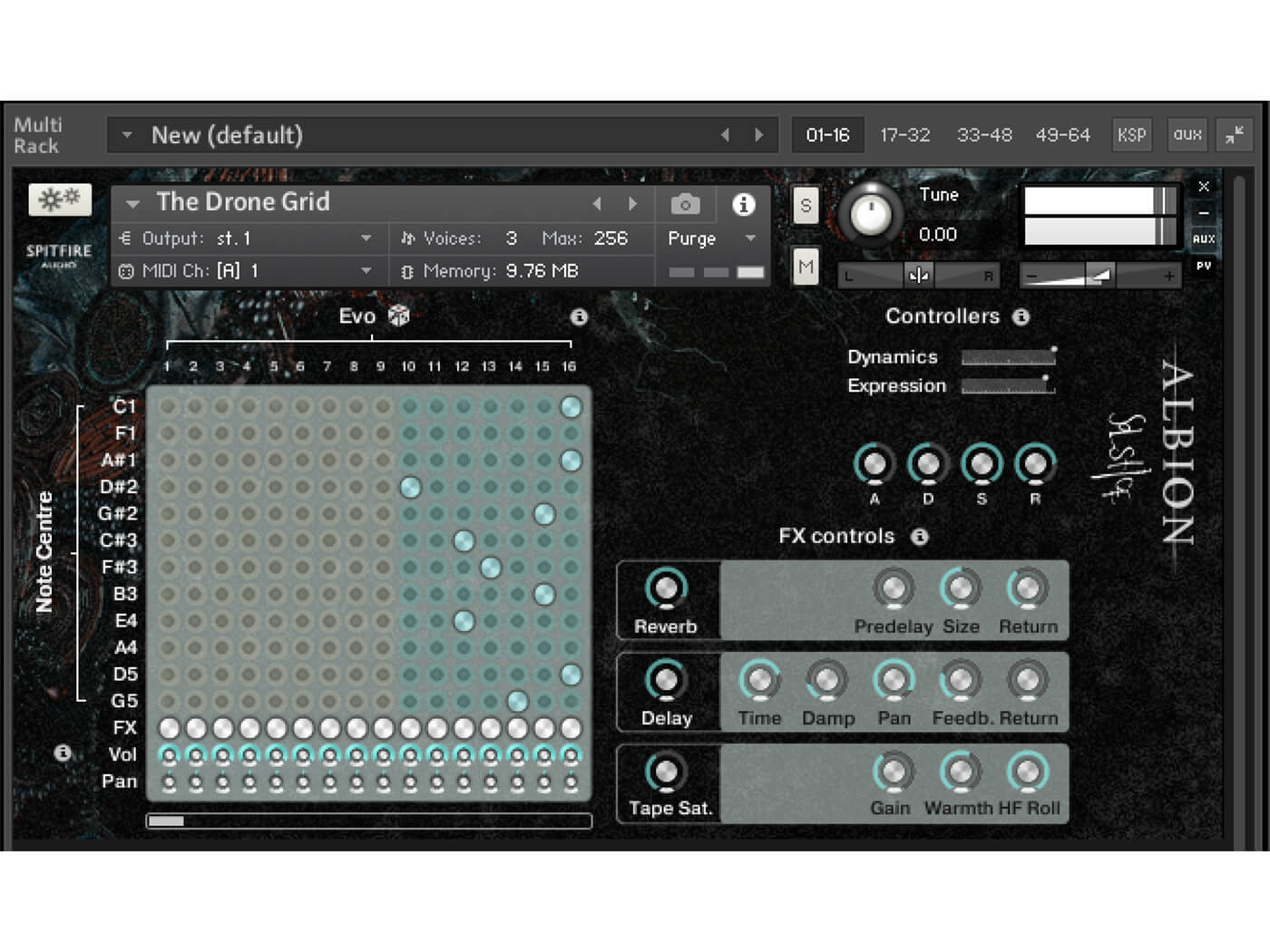 Solstice is one of the most inspiring sample libraries I’ve ever played, surpassing my previous favourite Albion library, Tundra. Don’t be put off if you’re not interested in writing folk music; this library is in no way constrained to one musical genre. It’s a curated collection of sounds performed, exhaustively captured and willfully processed by some outstanding musicians, and offers a sound palette that will generate endless ideas. Prepare to get lost with musical wraiths on the misty moors of a modern classic.