Evoke the spirit of film noir with Sonokinetic’s hard-boiled and retro-tinged sound library, coupled with an intelligent and ever-evolving digital engine. 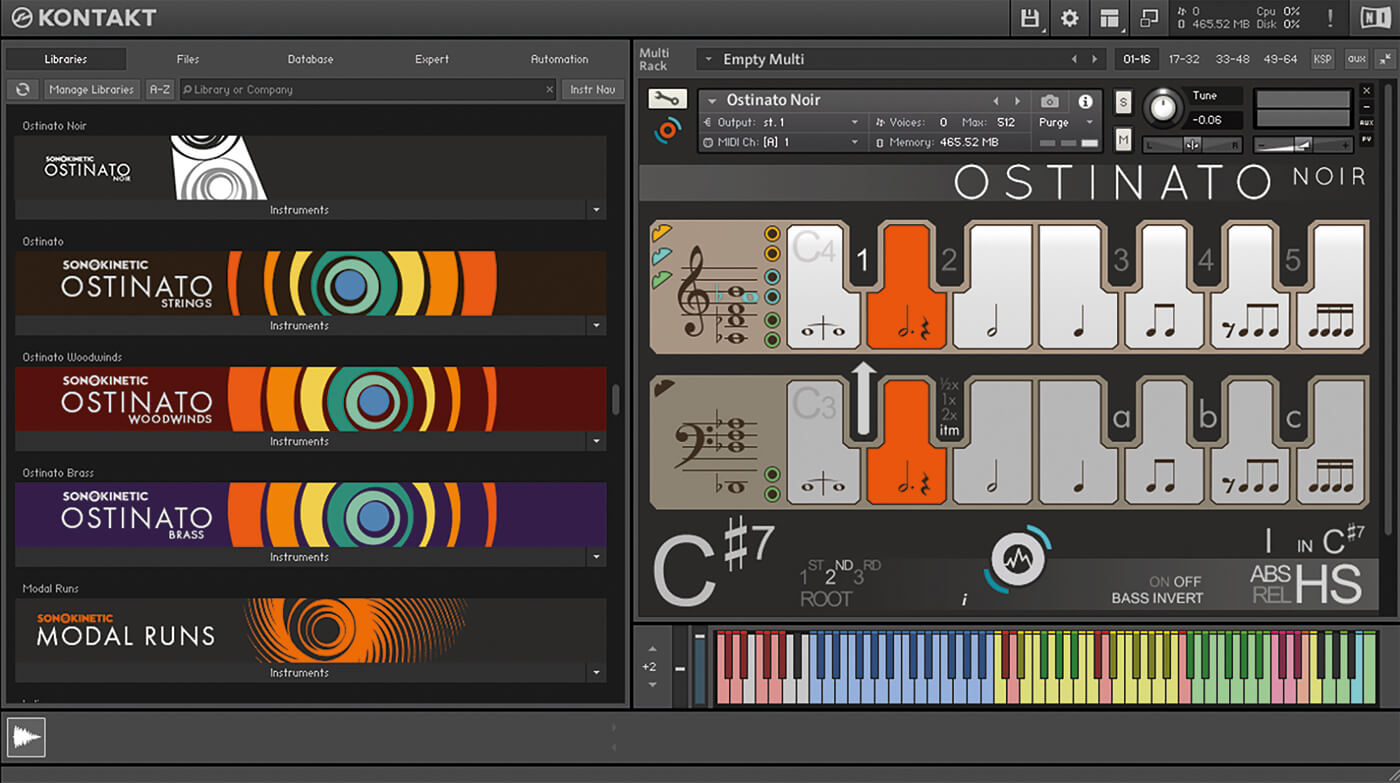 It doesn’t take a private detective to uncover Sonokinetic’s sterling reputation for sample libraries. The Dutch team has built an impressive range for Native Instruments’ Kontakt and Kontakt Player in recent years, covering an asphalt jungle’s worth of acoustic instruments, mainly of the orchestral variety. Among the company’s collection, you’ll find several phrase-based libraries that marry exquisitely recorded samples with expertly prepared patterns and scripts to create instruments that can sculpt authentic orchestral phrases and textures based on just a few notes from a keyboard.

These phrases aren’t simple repetitive loops, however. They’re sequences created on the fly by scripts that analyse the chords and notes you’re playing and apply them to a rhythmic pattern in a musically consistent way. The idea is that by blending and sequencing the phrases from these libraries, and adding parts created using Sonokinetic’s playable (by which we mean non-phrase-based) libraries, you can swiftly build authentic and convincing orchestral scores. 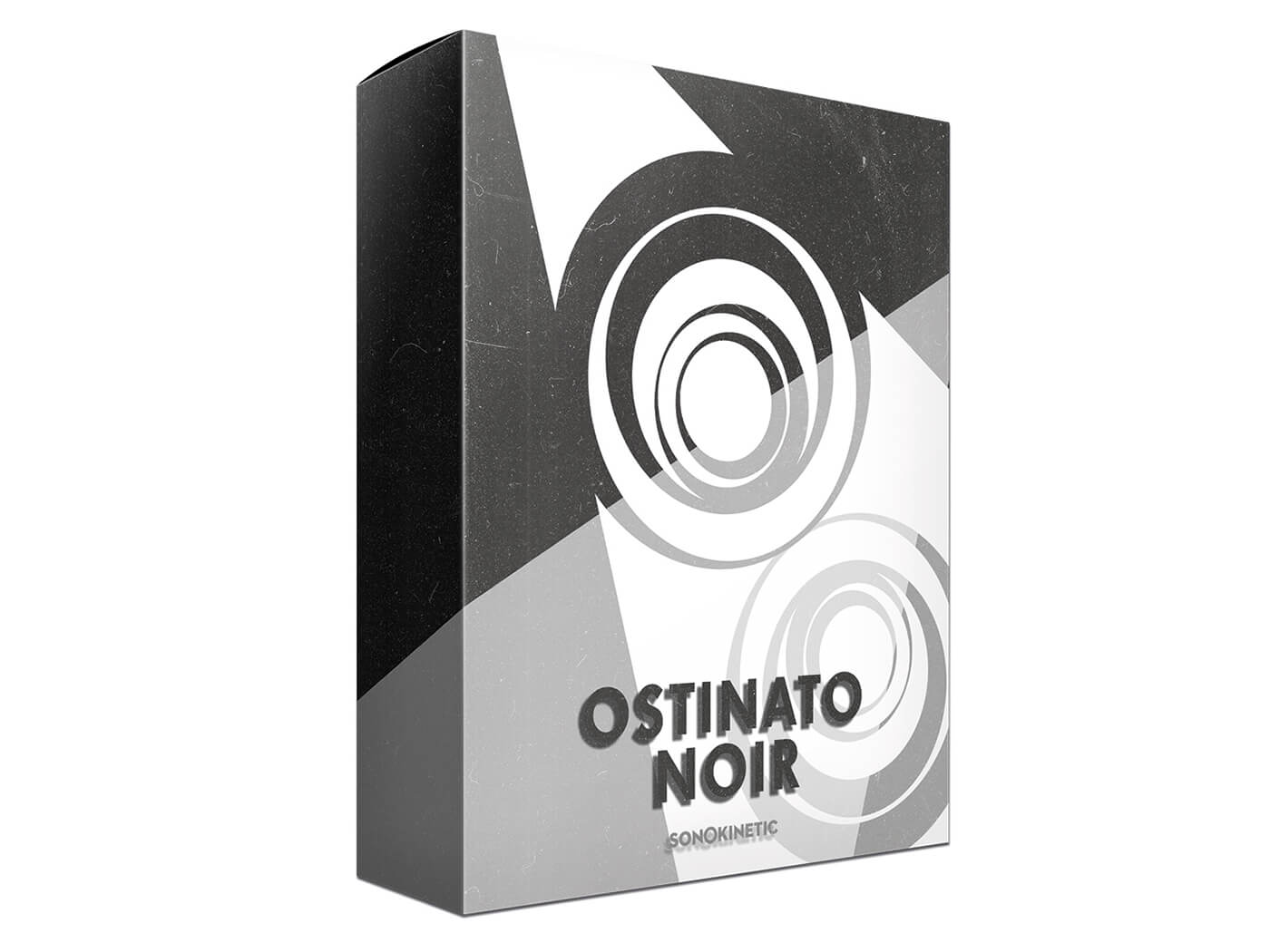 Out of the past

One of the most recent additions to Sonokinetic’s phrase-based offering is Ostinato Noir, which ties in with its Ostinato series, as well as its Noir library. In music theory, ostinati (or ostinatos, if you prefer) are repeated phrases that underpin music, often recurring against a changing harmonic background to create cadence and colour. A well-known example of this in classical music is Ravel’s Boléro, which features an opening phrase that repeats continuously throughout the piece while the harmony and melody weaves beautiful cadences around it.

For non-classical examples, think The Verve’s Bitter Sweet Symphony, whose iconic two-bar string pattern runs the length of the song, and Henry Mancini’s barnstormingly good theme for Peter Gunn, whose unforgettable guitar riff has a legacy greater than the mid-century US detective show itself. In essence, then, an ostinato is simply a posh name for a riff or vamp.

Ostinato Noir features seven rhythmic patterns, ranging from pairs of tied semi-breves (a note held for two bars) to repeated semi-quavers (16th notes). To play a pattern, simply press a white key in the C3-B3 range to select the pattern in the lower bass clef register, and again in the C4-B4 range to choose the pattern in the upper treble clef register. The pattern selection can be linked so that the same pattern will play in the upper and lower registers but you’ll get more engaging results when they remain unlinked. 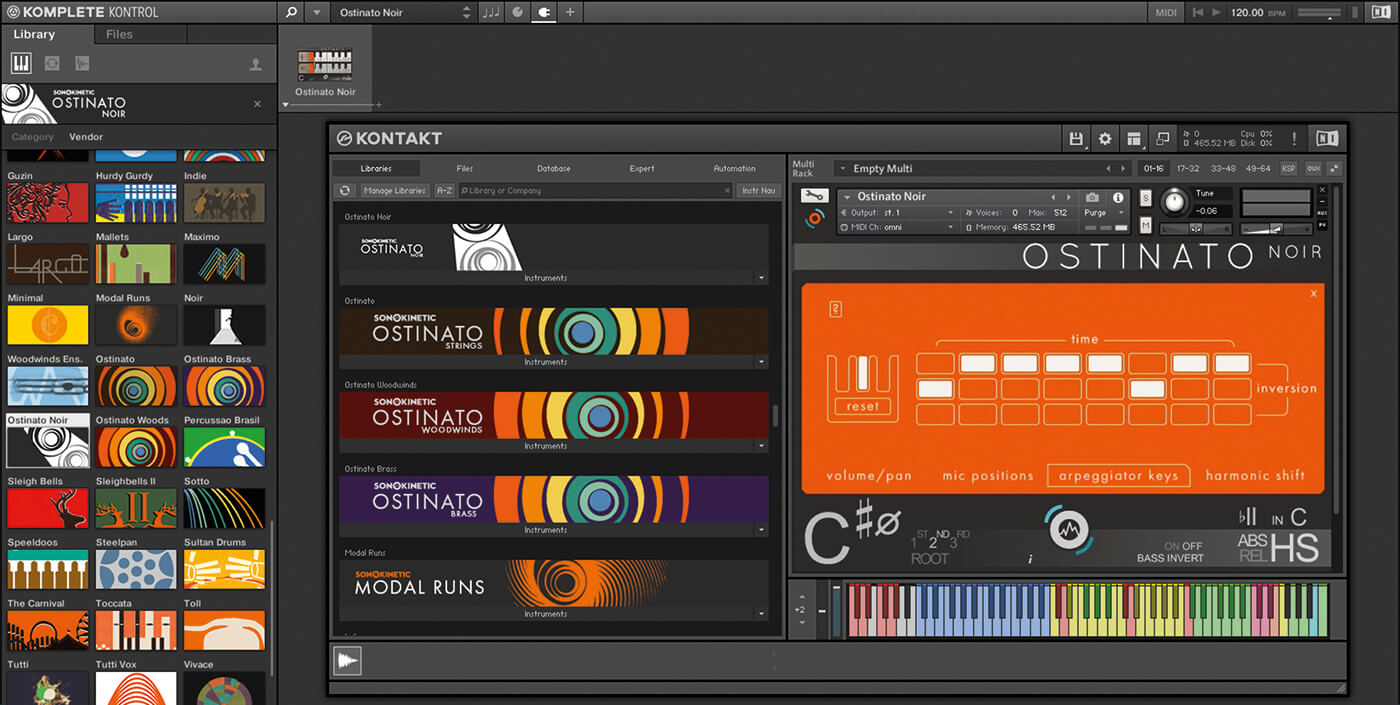 The rhythmic patterns are used to trigger chords, and you specify the chordal base that will be used by playing a triad or four-note chord in the C1-B2 range on your keyboard. Sonokinetic’s scripting can recognise 12 chord types – major, minor, dominant seventh, major seventh, etc – and also takes into account the previous chord and voicing. This works well enough for some four-note chords, such as sevenths but when you start getting into suspended chords and ambiguous voicings, the engine often gets it wrong, and will even come up with different results on subsequent instances of the same ambiguous chord being played.

A further point of confusion and, at times, frustration, is that when keying simple major or minor triads, Ostinato Noir will go ahead and add extended chord notes to the resulting sound. The notes it adds depend on the chord shape selected (there are five available, triggered via the black keys in the range C#4 to A#4) so that, for example, shapes one and two will always add a seventh. This is by design. It’s intended to help foster a jazzy mood in keeping with the library’s noir theme but it might be better left to the user to decide when and if extended chords are created.

The instrumentation in Ostinato Noir includes a string section for the lower register, and string, woodwind and brass sections for the upper register. You can enable and disable each section, either via the user interface or by pressing the required keyboard note, and can modulate and mix their levels using your keyboard’s mod wheel or via the instrument’s mixer page.

Ostinato Noir’s samples were recorded in the same hall as Sonokinetic’s other libraries, using the same mic setups: a far stereo pair, a close stereo pair, a wide stereo pair, and a multi-mic Decca tree setup. It’s this uniformity of recording setup that ensures that Sonokinetic’s libraries blend together so well. You can enable up to two of these mic sources at once and mix between them but because each source requires its own set of samples to be loaded and managed, it’s often more efficient to stick with just the one.

Ace in the hole

This pack has a few features that are relatively new to Sonokinetic’s phrase-based libraries. The harmonic-shift (HS) function allows you to use a single key to trigger new chords that are harmonically related to the currently active chord. You can now trigger new chord patterns with a single key in the HS area of the keyboard, C5-D5, without also having to hold down a root chord too – it remembers and uses the last played chord instead.

Another new feature is the inversion arpeggiator, able to automate inversion changes while a phrase is playing. There are three user-programmable patterns, triggered in the usual Sonokinetic way by pressing the corresponding note on the keyboard (F♯3, G♯3 and A♯3).

The final new feature, now being rolled out in updates to all Sonokinetic’s phrase-based libraries, is the ability to capture the MIDI that results from the chords and patterns being played, which you can then drag to the timeline of your DAW. This allows you to apply completely new sounds to the phrases and patterns produced by the instrument, opening up a slew of fresh creative possibilities.

In summary, Ostinato Noir is another stellar-sounding phrase-based library from the Dutch sample-wranglers. It’d be as dependable as Humphrey Bogart were it not for its few shortcomings. The library doesn’t provide as much control over the chords it produces as it might, but its foibles are at least well-intentioned. Work around them and you should be able to sculpt noir scores to rival those of Miklós Rózsa. 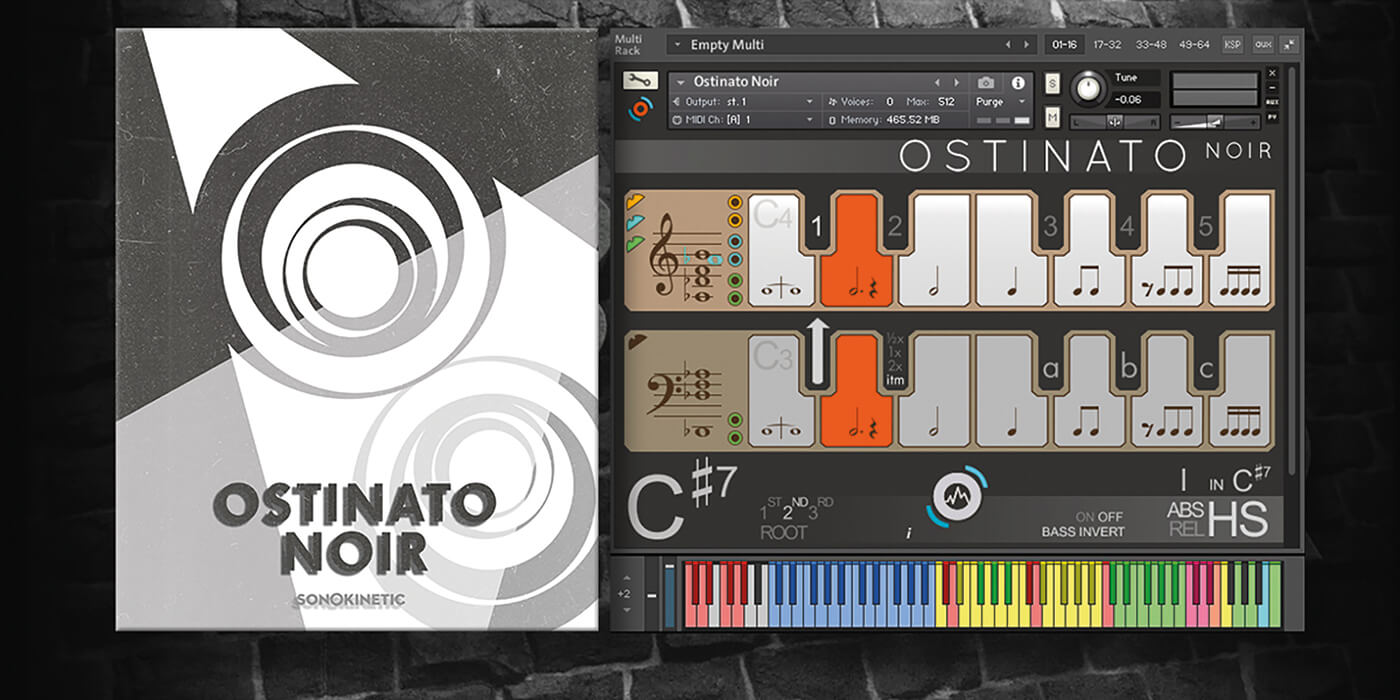 Some of Sonokinetic’s phrase-based libraries are so focused on their specific goals that they need to be partnered with other libraries from the Dutch company’s collection to get the best from them. Ostinato Noir, however, can stand alone thanks to it being anchored on something that is, by definition, repeated regularly throughout a piece of music. That said, it blends beautifully with Sonokinetic’s other libraries, and would likely provide a worthy launchpad for those thinking about dabbling with this kind of library for the first time.

Bear in mind though, that the keyboard-control system employed by Ostinato Noir takes some getting used to – for fully intuitive operation, it may need to be partnered with one of Native Instruments’ light-guide-enabled controller keyboards, which are supported by Sonokinetic products. 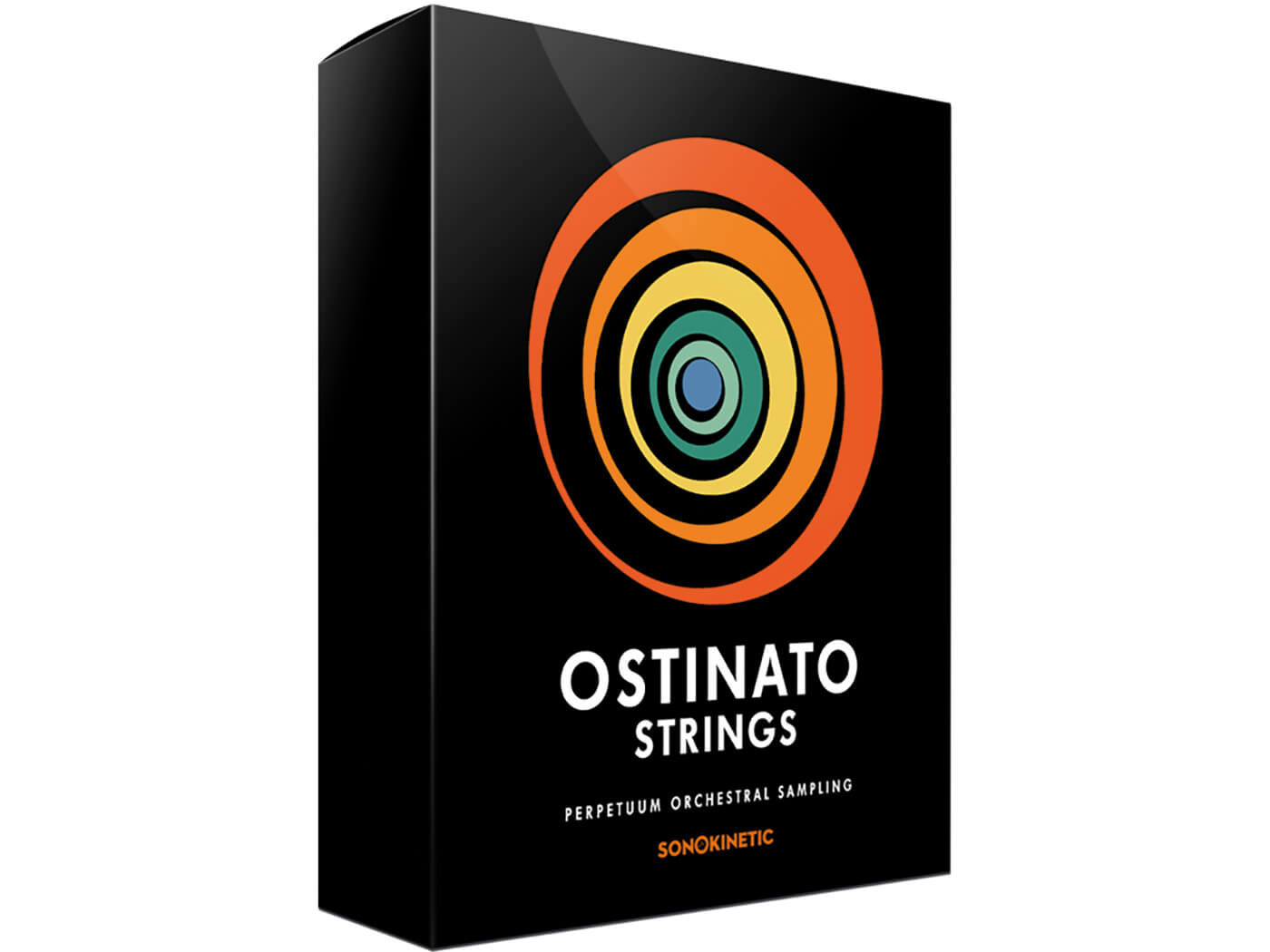 If you’re looking for an instrument that creates repeated orchestral phrases, Sonokinetic’s Ostinato collection (of which Ostinato Noir is a member) is the first place you should look. This package focuses solely on string sections and includes its own set of phrase patterns, distinct from those in Ostinato Noir. 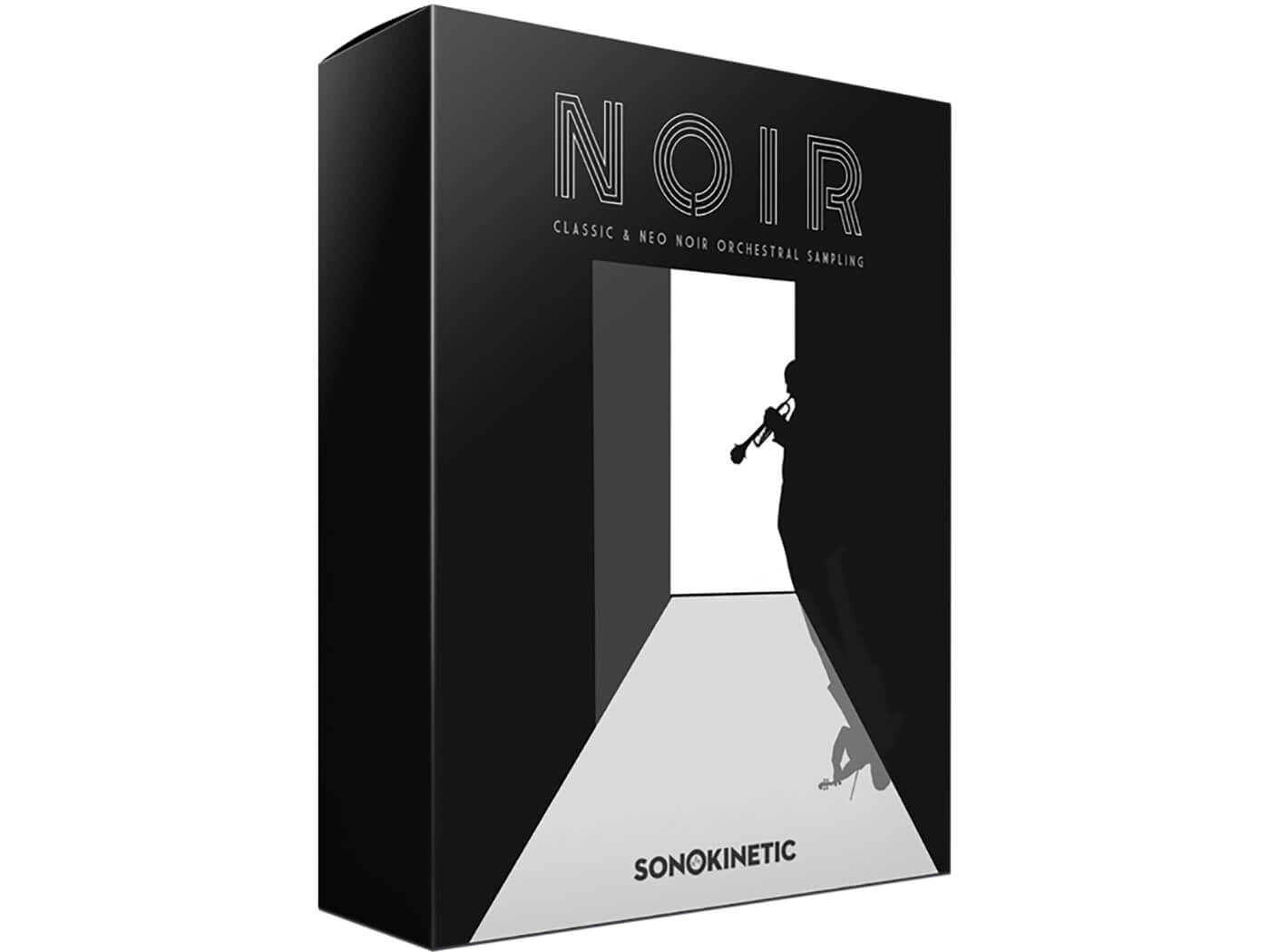 Another of Sonokinetic’s phrase-based libraries, this hard-boiled collection of mutually complementary musical passages can be combined and intertwined into complete performances. Noir has the same jazz-infused sound as Ostinato Noir but allows you to build more thematic variation into your compositions.