The latest pack from Sonokinetic allows for the simple creation of easy orchestral runs throughout your tracks, which blends perfectly with the company’s canon of products. 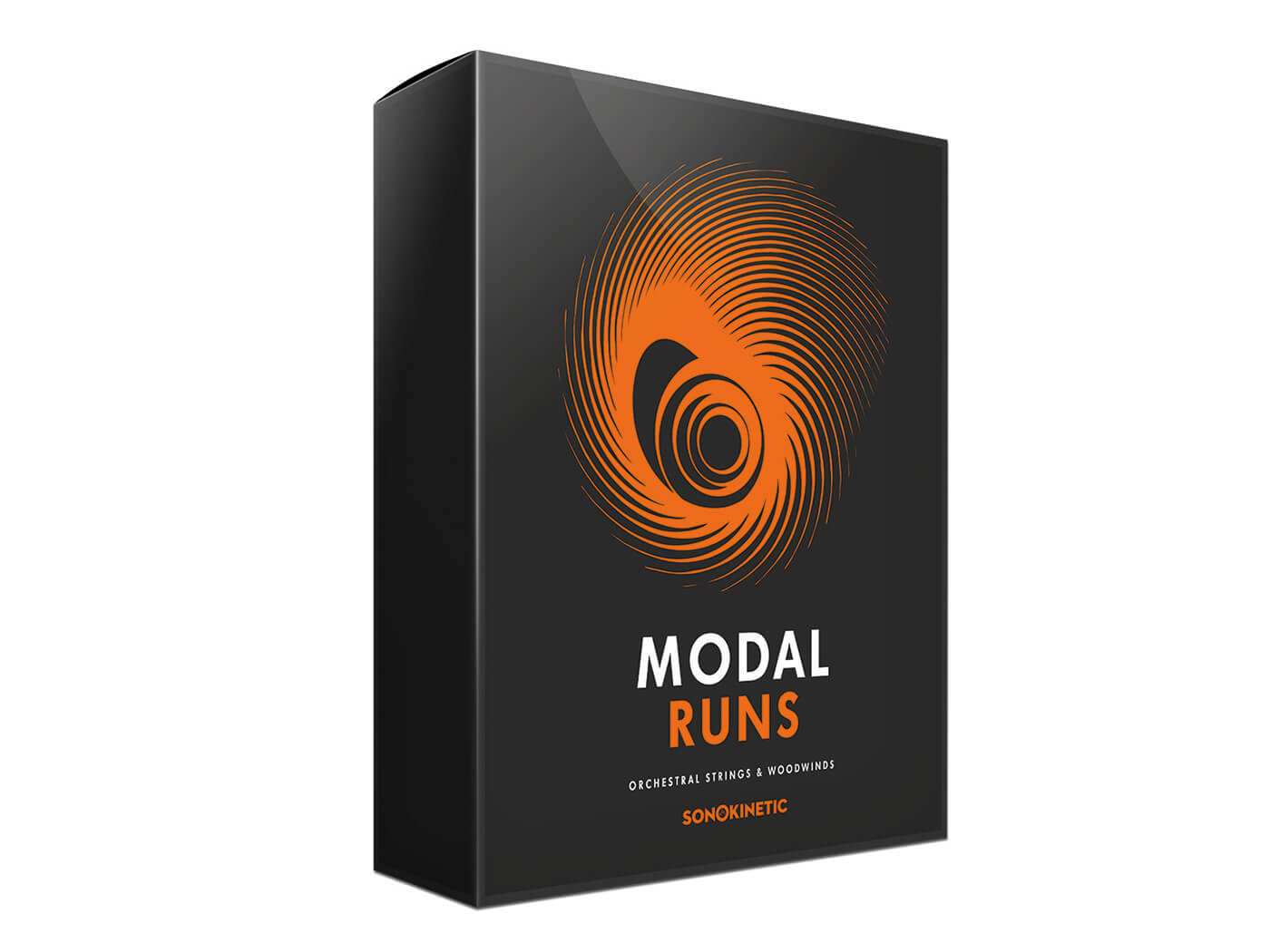 Over recent years, Sonokinetic has built an increasingly impressive reputation for its ever-growing library of sampled orchestral instruments. The range is vast, with directly-playable orchestras, sections and individual instruments, alongside phrase-based collections that employ innovative keyboard triggering that allows you to adapt and modify the phrases in a very intuitive way.

All of Sonokinetic’s libraries are built on the Kontakt platform, so run within Kontakt or Kontakt Player, and one of the secrets to the company’s success has been the clever ways in which it has harnessed the full potential of the platform. Nowhere is this more apparent than with the aforementioned phrase-based collections in which it uses Kontakt’s scripting engine to create phrases on-the-fly based on keyboard note inputs. The results can be impressive, delivering convincing and playable orchestral phrases voiced as they would be by a real orchestra.

The latest phrase-based addition to Sonokinetic’s library, then, is Modal Runs, which is part of the company’s Ostinato series. Unlike some of its phrase-based collections, which are designed to create more complex thematic passages of music, the Ostinato series focuses in on much smaller musical components. Given the name of this latest collection, it will come as no surprise that its focus is on creating fast runs of notes based on modal scales. 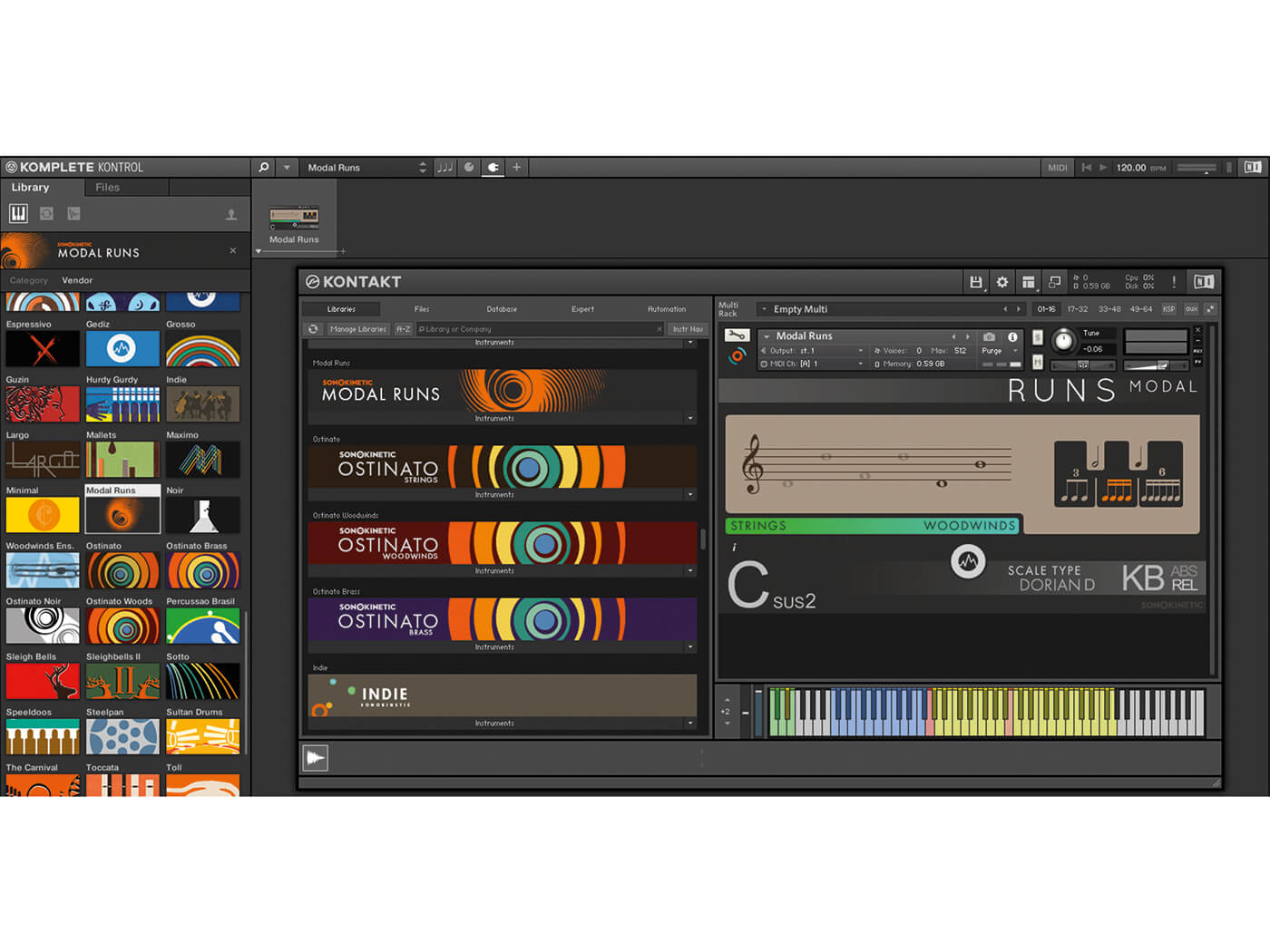 Modes are a fairly advanced area of music theory, but really they just describe the harmonic ‘colour’ of a scale. For example, a C major scale (major is in fact the Ionian mode) has a different colour to C minor (minor is the Aeolian mode), which is in turn different to C Lydian, C Phrygian, and so on.

It isn’t entirely necessary to have a grasp of the underlying music theory in order to use Modal Runs, because it calculates the correct mode to use based on the keys you are playing, but such knowledge undoubtedly opens up the full potential of the instrument. The reason for this lies in how you interact with the instrument via a keyboard; if you understand modes then you will find it quite easy to hit the right combo of keys to create the desired run.

Modal Runs splits the keyboard into several different zones that perform different functions. These are indicated by colouring the keys on Kontakt’s graphical keyboard, and these colours are also utilised by the Light Guides on Native Instruments S-series controller keyboards.

Keys C1 to F#2 are used to define the chord on which runs will be based, and the instrument recognises all basic triads in all three voicings, as well as many four-key extended voicings. Having played a chord in the lower zone, you then play any pair of keys, legato style (i.e. not simultaneously), in the G2 to G5 range, and this triggers a musical run between those two notes. Playing the lower note first will create an upwards run; playing the higher note first creates a downwards run. The run’s notes will all be diatonic to the chord played in the lower zone, with the scale and mode determined by the lowest note you play in the upper zone. 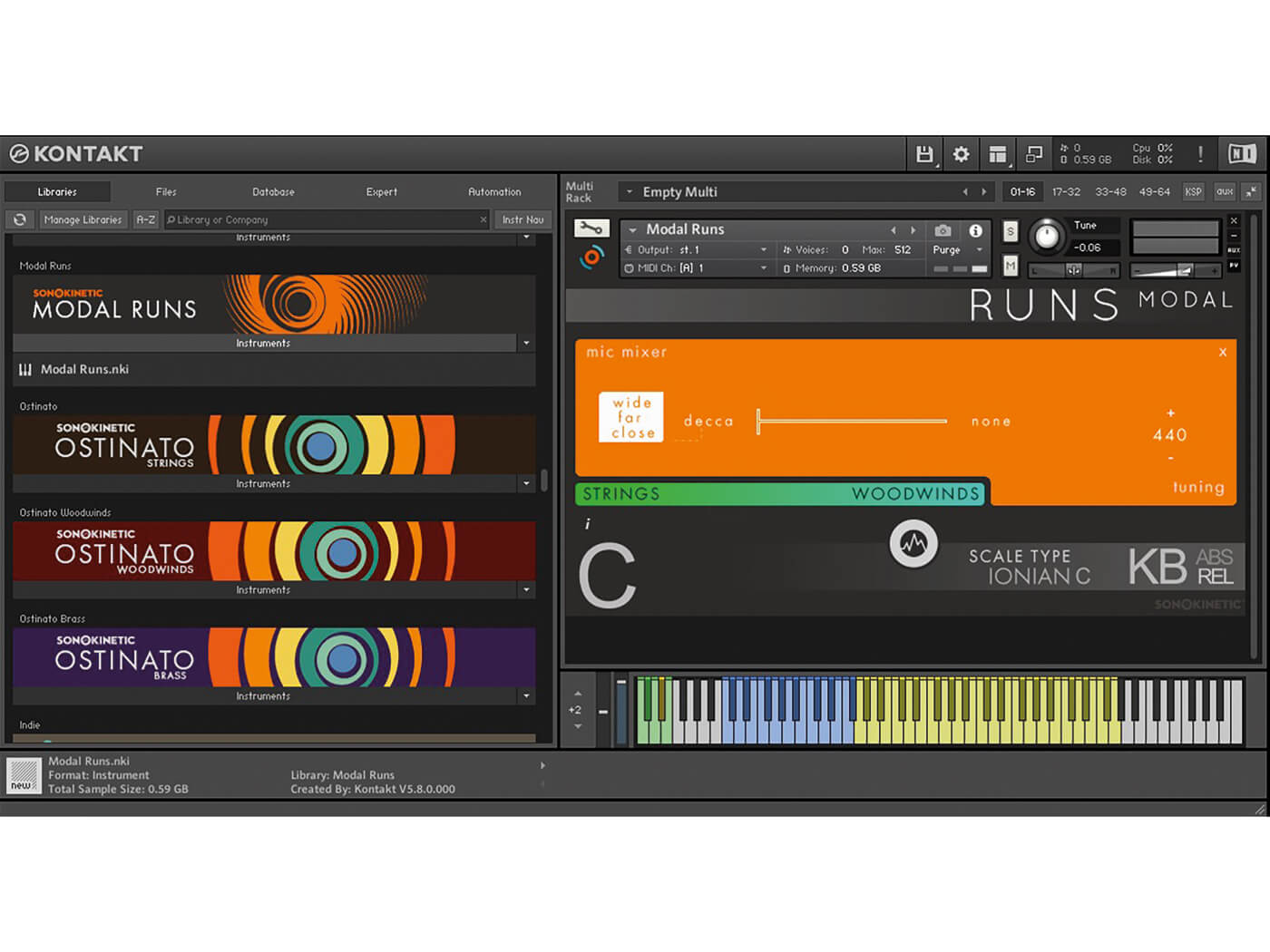 For example, if you play a C triad in the lower zone and then hit keys C3 and C4, Modal Runs will produce a one octave run in C Ionian (i.e. C major). If you then hit keys D3 and D4 (the C triad remains active) you will get a D Dorian run; E3 and E4 will give E Phrygian, and so-on. The upshot of this is that you need to know the parent key of any given modal scale in order to create a run using that scale – if you wanted a C Lydian run, for instance, you’d need to know to play a G triad in the lower zone and a C as the lowest note in the upper zone.

If all of this talk of modes and phrygians and whatnot sounds like gobbledegook, then you may find Modal Runs confusing to use, but its interface always displays the currently active chord, the currently active scale name and the last-played pair of notes, so with a bit of trial and error you can find the scale you’re after (and hey, it may even help you to get to grips with modes).

The timing of Modal Runs’ phrases is based on your DAW’s (or Kontakt’s, if running standalone) tempo, which is then interpreted based on a length setting in Modal Runs. This offers a choice of minim (i.e. 1/2 note), crotchet (I/4 note), triplets (1/8T), semiquavers (1/16) and sextuplets (1/16T), but how all of this actually translates into the phrase length is a bit mysterious.

There is a stipulation that the selected length will only be used “within reason”, that is, if the run can realistically be played at the selected speed. But even so, the setting you choose never seems to match up to either the lengths of individual notes within the run, or to the overall length of the run. And whilst runs always play in time, the triplet, semiquaver and sextuplet options sometimes produce longer notes than the crotchet and minim options, which is confusing.

The actual samples involved in Modal Runs are from a string section and a woodwind section. The balance between the two sections can be controlled by clicking and dragging on a strip in the instrument’s interface, or can be assigned to a CC for real-time control from your keyboard.

The samples were recorded using the same hall, microphone setups and microphone positioning employed in all other Sonokinetic instruments, ensuring Modal Runs blends well with its stablemates. Four different mic setups were used: a wide stereo pair, a distant (far) stereo pair, a close stereo pair and a ‘decca tree’ cluster placed in the hall’s optimal listening position. Up-to two mic types can be activated at the same time, with the balance between the two easily adjustable with a slider.

In the case of the Ostinato series this uniformity of venue and mics is especially important because the collections are tightly focussed on specific compositional components, and can’t really hold their own as standalone instruments. This is by design, as the series is intended to provide the fills, trills and other essential building blocks that the company’s other, more elaborate, phrase-based instruments don’t provide, and that are difficult to emulate realistically using directly-played orchestral instrument samples.

Viewed from this perspective, Modal Runs is a great addition to Sonokinetic’s library, able to create in moments what would otherwise require an exceptionally skilled keyboard player, or hours of meticulous sequence editing. And, as with all of Sonokinetic’s instruments, it sounds fabulous! 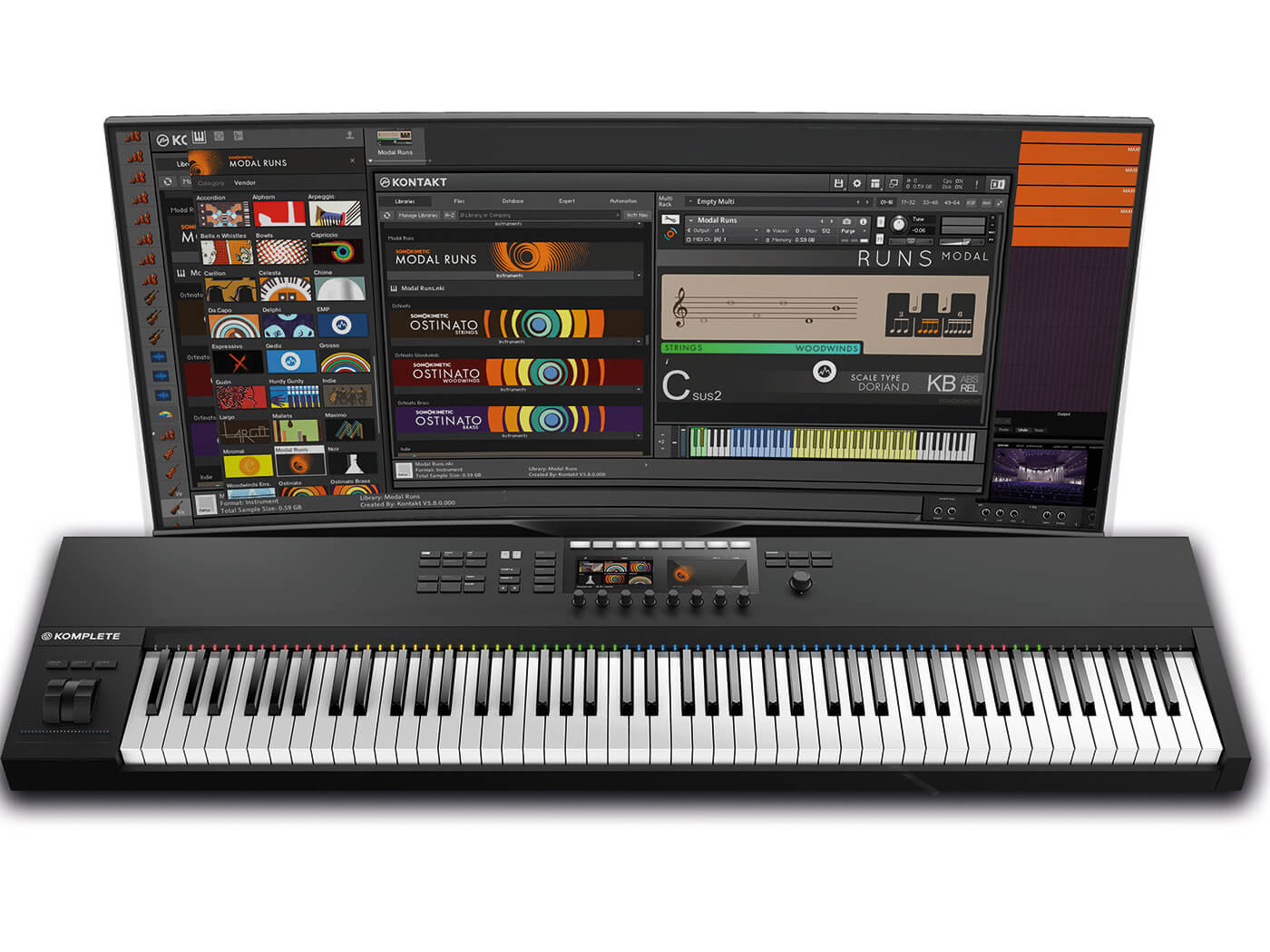 Sonokinetic’s voluminous orchestral sample library is designed to be somewhat modular, with the individual products tending to be quite focussed, whether that be on a specific style or mood or, as is the case with Modal Runs, on a specific element of a larger orchestral toolbox. And whilst some of Sonokinetic’s products can work very well in isolation, Modal Runs really needs to have some of its buddies around it for it to really become useful (unless your aim is to create a piece of music consisting entirely of neverending orchestral runs, of course!). If you make a lot of music for TV and/or film then Modal Runs is sure to be of interest, especially if you have other Sonokinetic instruments in your collection. 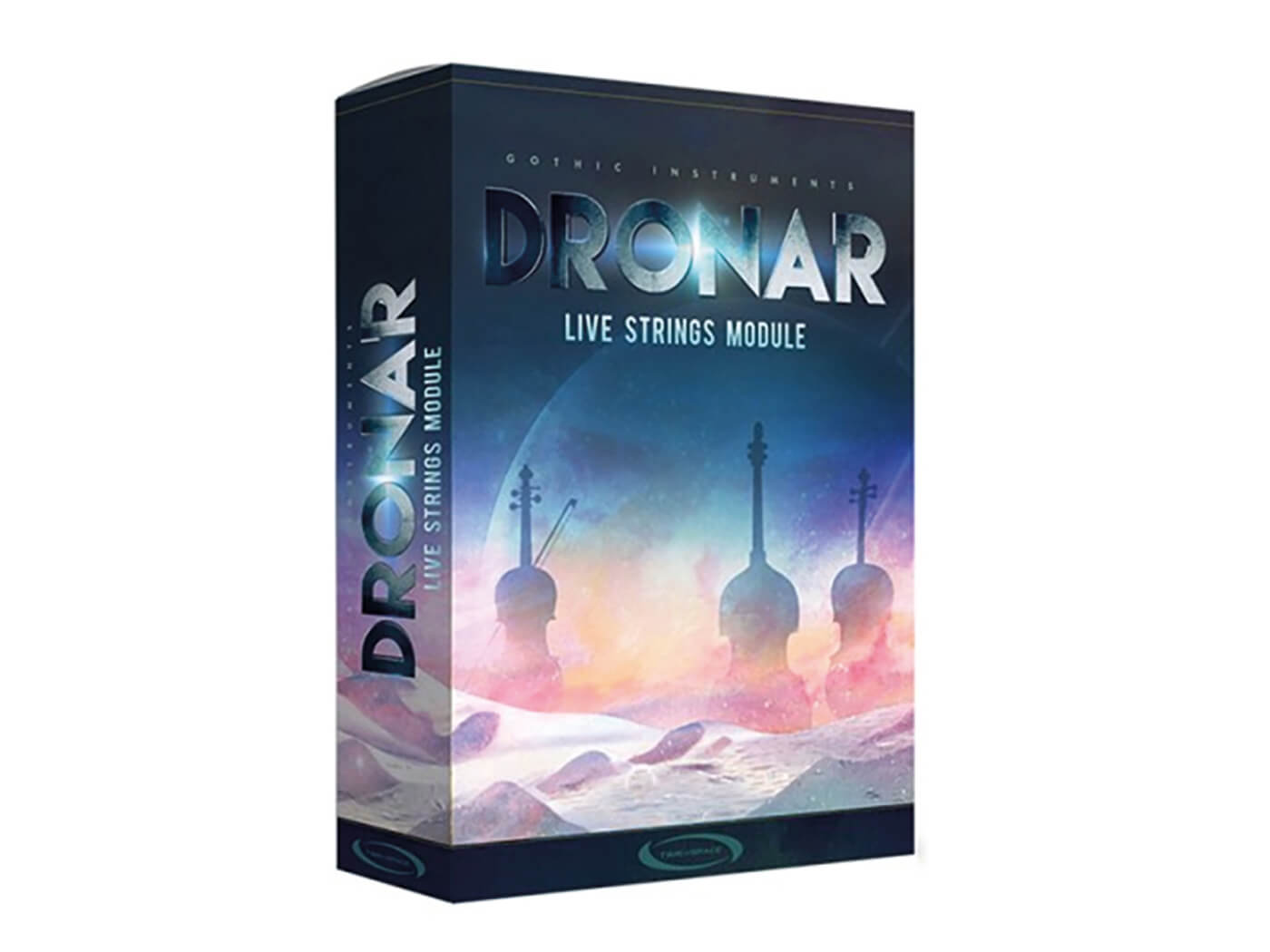 There aren’t really any direct alternatives to Modal Runs, but that’s not to say there are no other excellent orchestral libraries to consider, as Zero-G’s DRONAR Live Strings amply demonstrates. Built for the Kontakt platform, Live Strings generates big, lush orchestral atmospheres based on just a few played keys. 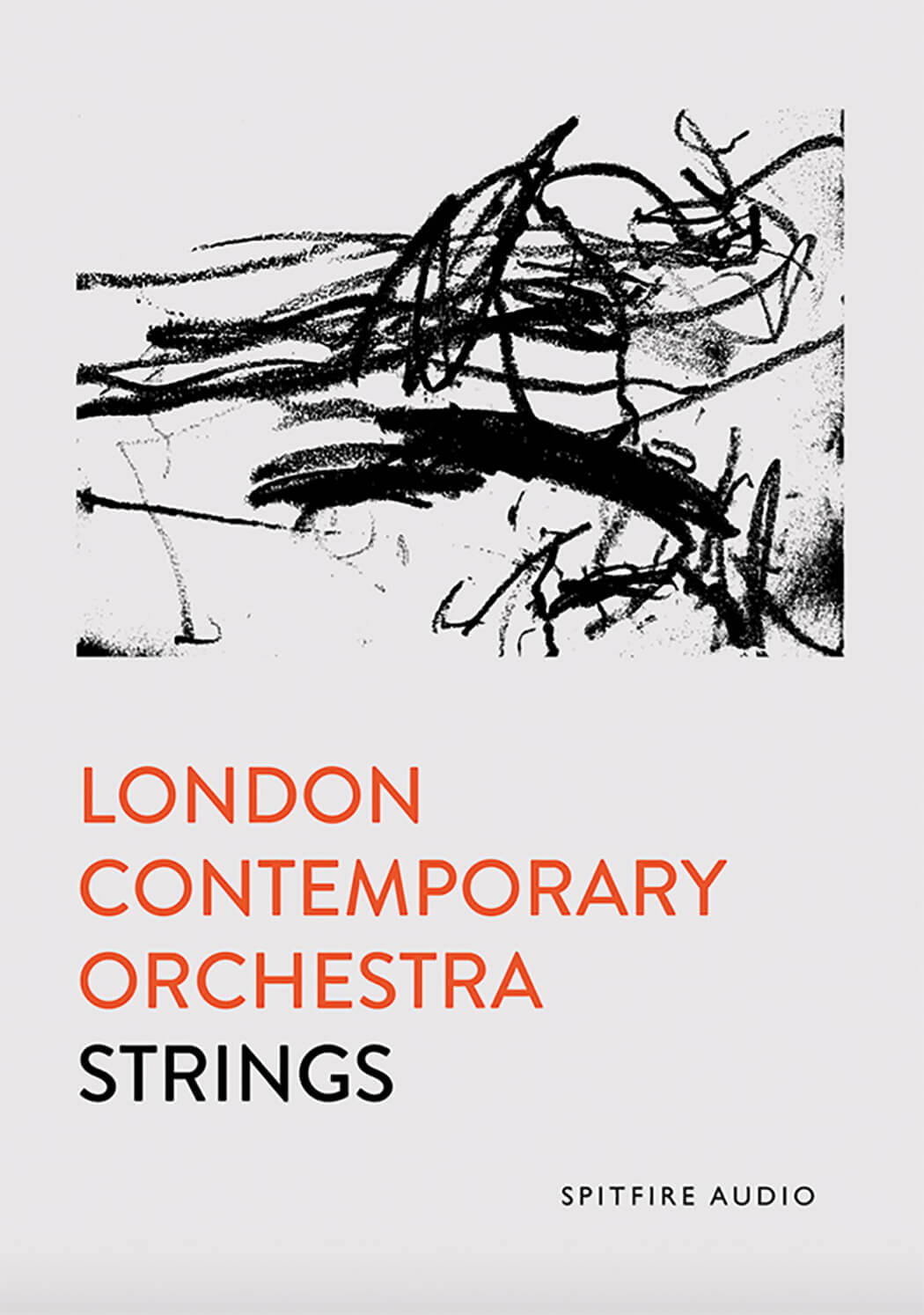 Spitfire has a lot of orchestral sample instruments in its collection, some of which are directly playable, and some that are phrase-based. In the latter category, London Contemporary Orchestra Strings consists of a diverse selection of rich, detailed samples and inspirational musical phrases.