Flying in the face of the epic and cinematic trend of modern sample libraries, Sonokinetic’s latest aims to appeal to those who are aiming for a more DIY sonic aesthetic. 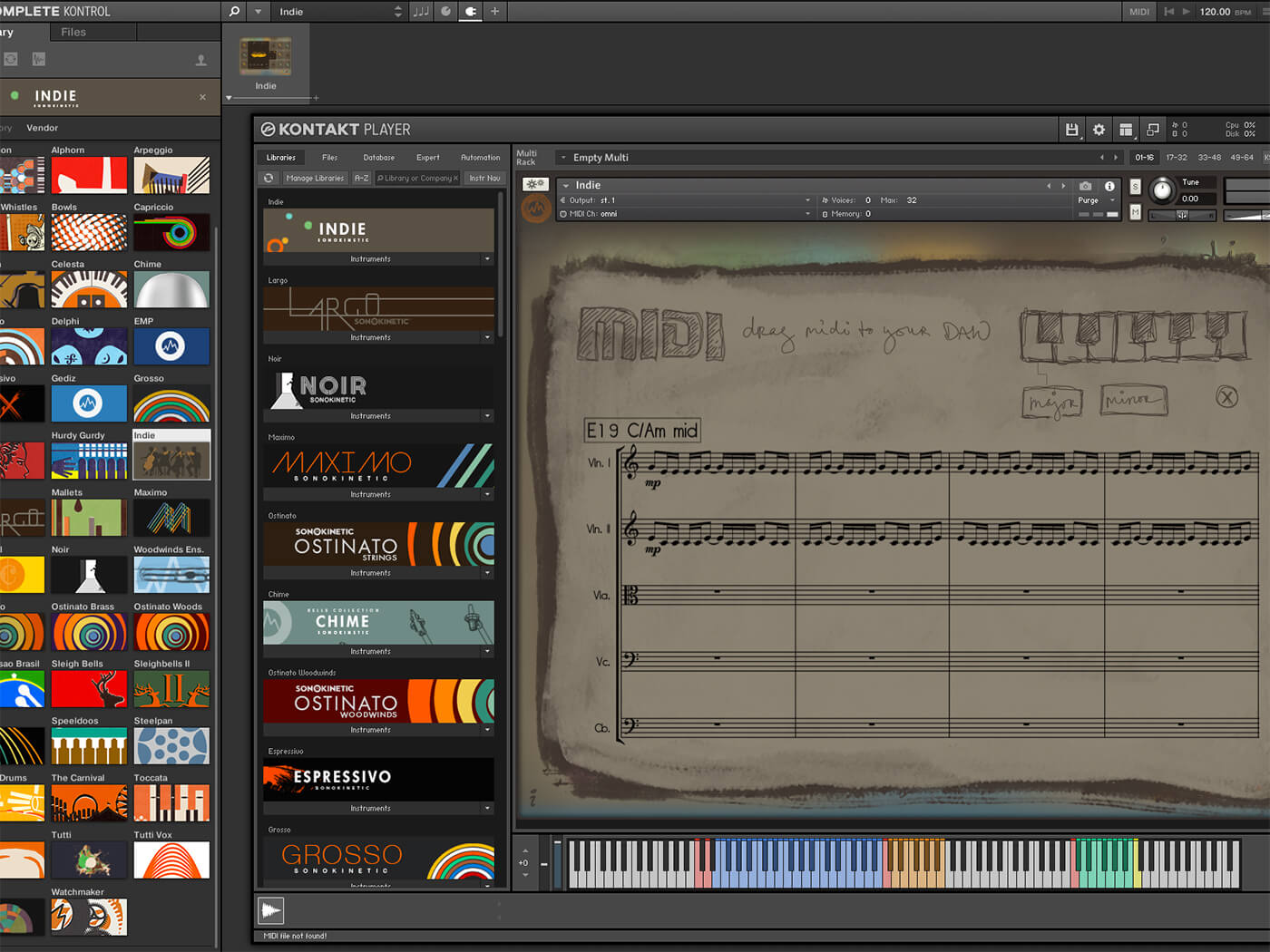 Samplers have always tended to struggle with emulating the subtle (and even not so subtle) sonic nuances created by acoustic instruments – LFOs, envelopes and the like are often too synthetic, especially when used with samples that are otherwise highly accurate. Advanced software samplers deal with this by allowing the creation of instruments comprised of vast banks of samples that capture every conceivable note and nuance of an acoustic source, and by providing scripting engines that can select, switch and control these samples.

Indie, the latest addition to Sonokinetic’s ever-growing collection of orchestral sample libraries, makes full use of these advanced sampler features. But where many of its stablemates are aimed at delivering the grandeur and presence of a full orchestra, Indie is altogether more intimate and personal in nature, focusing on small ensembles and solo instruments.

In keeping with a number of Sonokinetic’s other products, such as Largo and Noir, Indie is a phrase-based library rather than a set of directly-playable note-by-note samples. The impressively large collection of phrases were composed for and performed by a string quartet, a thirteen-part string ensemble, a seven-part woodwind section, a brass quintet, and a variety of melodic percussion instruments (marimba, xylophone, glockenspiel, vibraphone, crotales, upright piano, celesta, concert harp and concert cimbalom).

All of this is packed into a 62GB library containing over 47,000 samples in 44.1kHz/24-bit format, packaged for use in Native Instruments Kontakt version 5.8 and above, or in NI’s free Kontakt Player. Indie also makes full use of NI’s NKS standard, too and so integrates fully with the colour-lit keys and parameter controllers found on Komplete Kontrol keyboards. 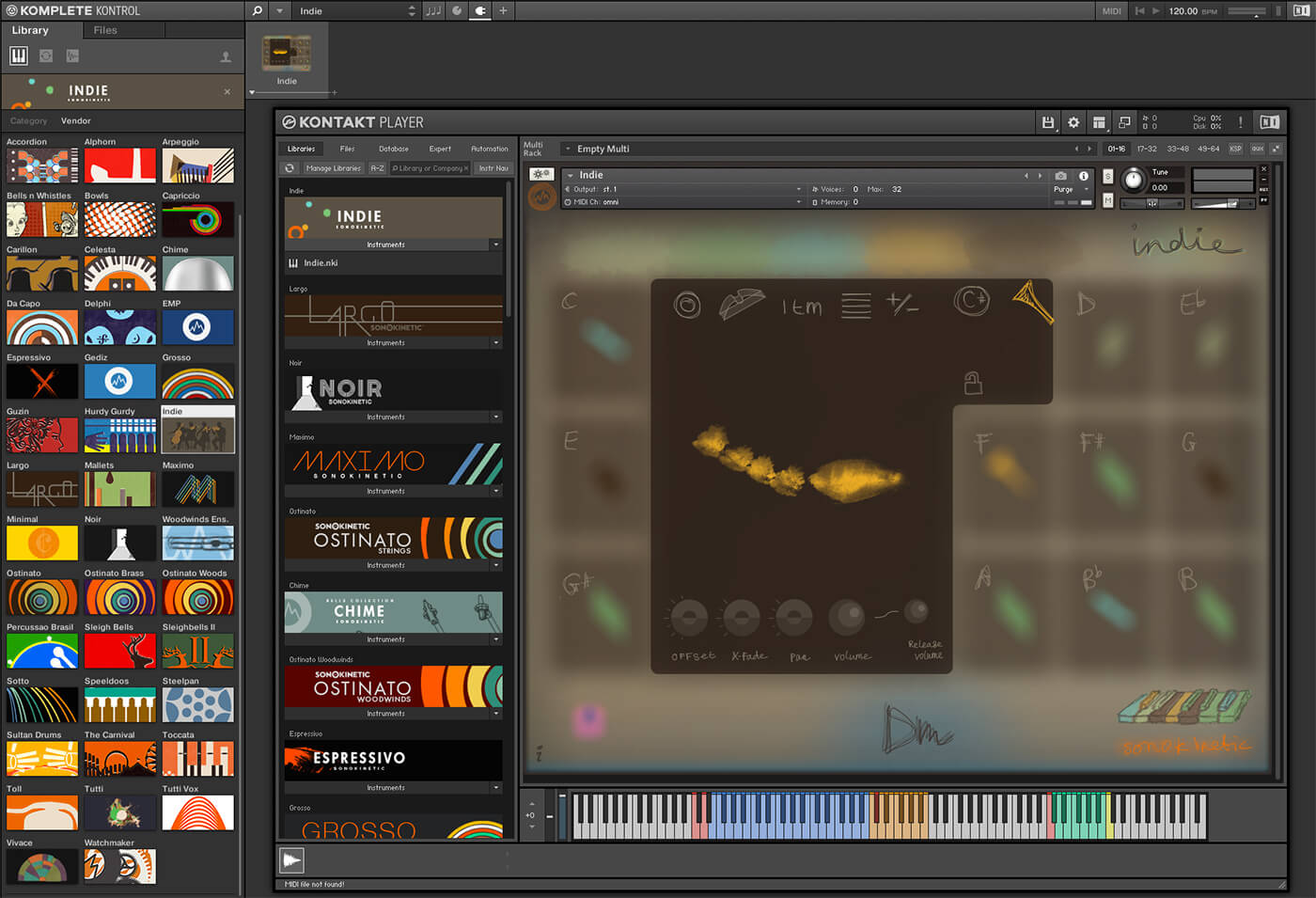 Indie uses the same keyboard mapping and control system that’s used in Sonokinetic’s other phrase-based libraries: It provides 12 playback ‘slots’, each of which holds and controls a phrase, and which are mapped to keys C3 to B3 on the keyboard for triggering. Playing a chord on keys E1 to B2 sets the musical key that the phrases will play in – Indie recognises major and minor triads played in all three inversions.

Timing sync between phrases can also be adjusted from the keyboard. Key C0 switches the Phrase Continue/Retrigger mode – in Retrigger mode, phrases are retriggered when the chord changes, while in Continue mode phrases will change harmony but continue to play from their current position. Continue mode also works in conjunction with the Bar Sync option, toggled with key D0, that, when enabled, locks the phrase playback position to the host DAW’s current bars-and-beats position. Finally, and new to Sonokinetic’s control system, is Phrase Link. This allows the bar-and-beat position of individual phrases to be locked together irrespective of Continue/Retrigger and Bar Sync modes.

Stylistically, Indie’s phrases are inspired by modern TV drama, arthouse cinema and independent video games, and have an intimate, sometimes romantic, sometimes jazzy, sometimes bold colour and feel. The phrases are organised into nine ‘themes’, such as Life, City and Glimpses, and each theme contains numerous phrases for each ensemble. While these themes are a good way to organise things, they don’t in any way limit or dictate which phrases will work well together; indeed, the intention is that the user will mix-and-match phrases from within different themes which, when coupled with different retriggering and phrase syncing modes, makes possible a huge choice of harmonic, rhythmic and stylistic variation. You also have the option to randomise the phrases assigned to each slot, although slots can be locked to prevent their phrases from being changed. 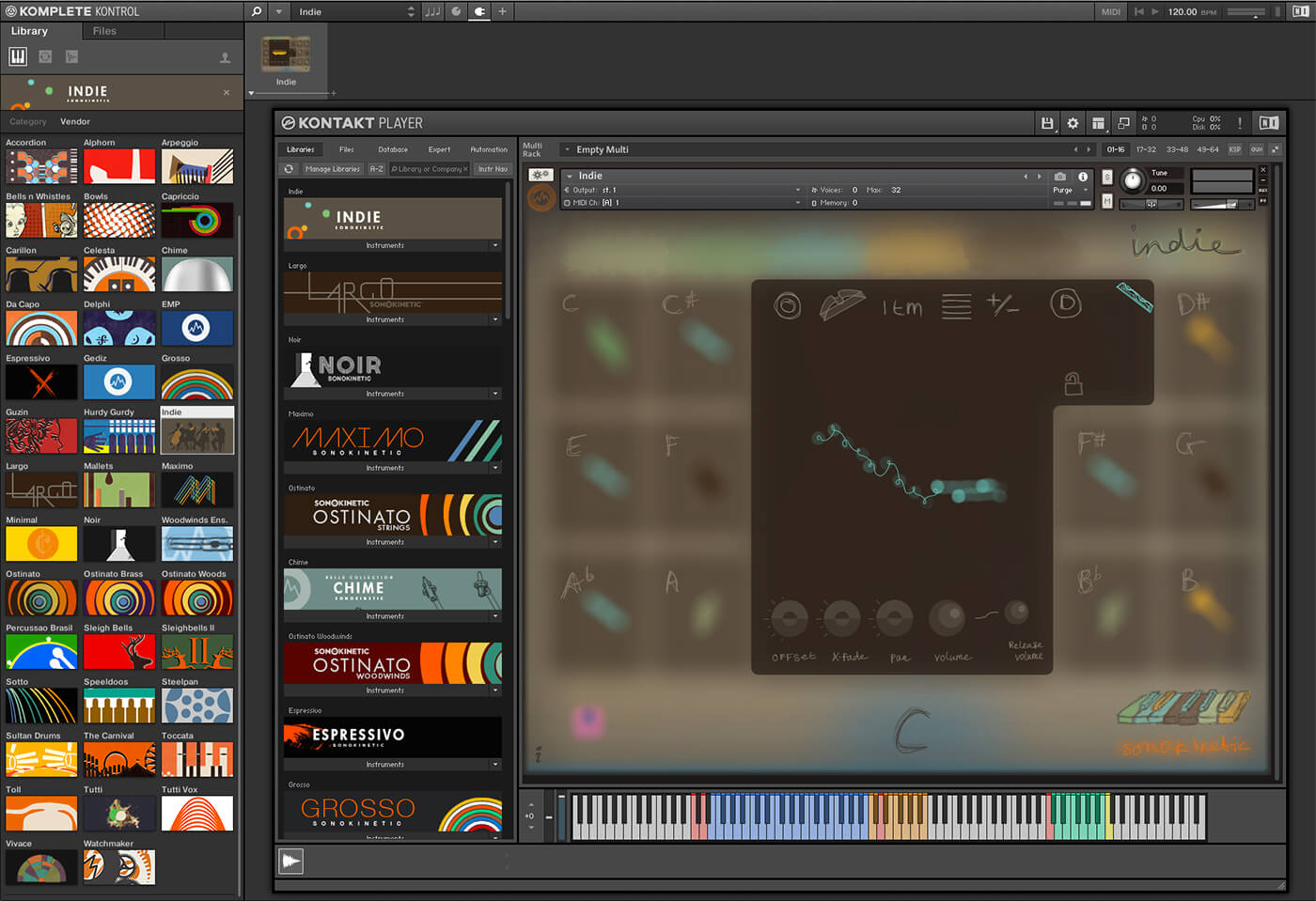 The recordings that comprise Indie are simply sublime and capture fully the sonic detail of the instruments, the nuances of the musicians’ performances and the acoustic richness of the hall they were recorded in. That hall is the same as used in Sonokinetic’s other libraries, as are the four mic configurations/positions, which gives consistency across their entire collection. Of the four mic setups – close mics, far and wide mic pairs positioned at the back of the hall, and a sumptuous-sounding Decca Tree setup positioned at the hall’s optimal listening position – you can choose to work with just one, or select two and crossfade between them (although this adds hugely to Indie’s already significant system demands).

The phrases themselves were all performed at 100bpm, and Indie uses Kontakt’s time-stretch engine to adapt these to the host DAW’s tempo. Each phrase slot can be switched to play its phrase at 1/2x, 1x or 2x the host tempo, or an Intelligent Tempo Mapping (ITM), option can be selected. This ensures that Indie uses the most efficient, least ‘artifacty’ time-stretching settings at any given tempo.

Sonokinetic has gone for a whimsical, pastel-shaded, sketch-book look for Indie’s user interface, although this can be switched to a bolder, more legible version if desired. The main view shows the 12 phrase slots, with the last-clicked or played slot expanded to show its options and settings. From here, you have access to features such as the slot’s harmonic and timing offsets, a score of the loaded phrase, the pan, volume and release volume of the slot’s phrase, and so on.

The active slot also displays a peculiar collection of lines and daubs that act as a visual representation of the loaded phrase, and which are colour-coded according to the phrase’s instrumentation (khaki for string quartet, blue for woodwinds and so on). While at first glance these sketches look, well, sketchy, you soon realise they are in fact coherent and eminently readable visualisations of the phrases they represent and are very helpful once you ‘get your eye in’ on them (we’ve created some examples here so you can see and hear for yourself). 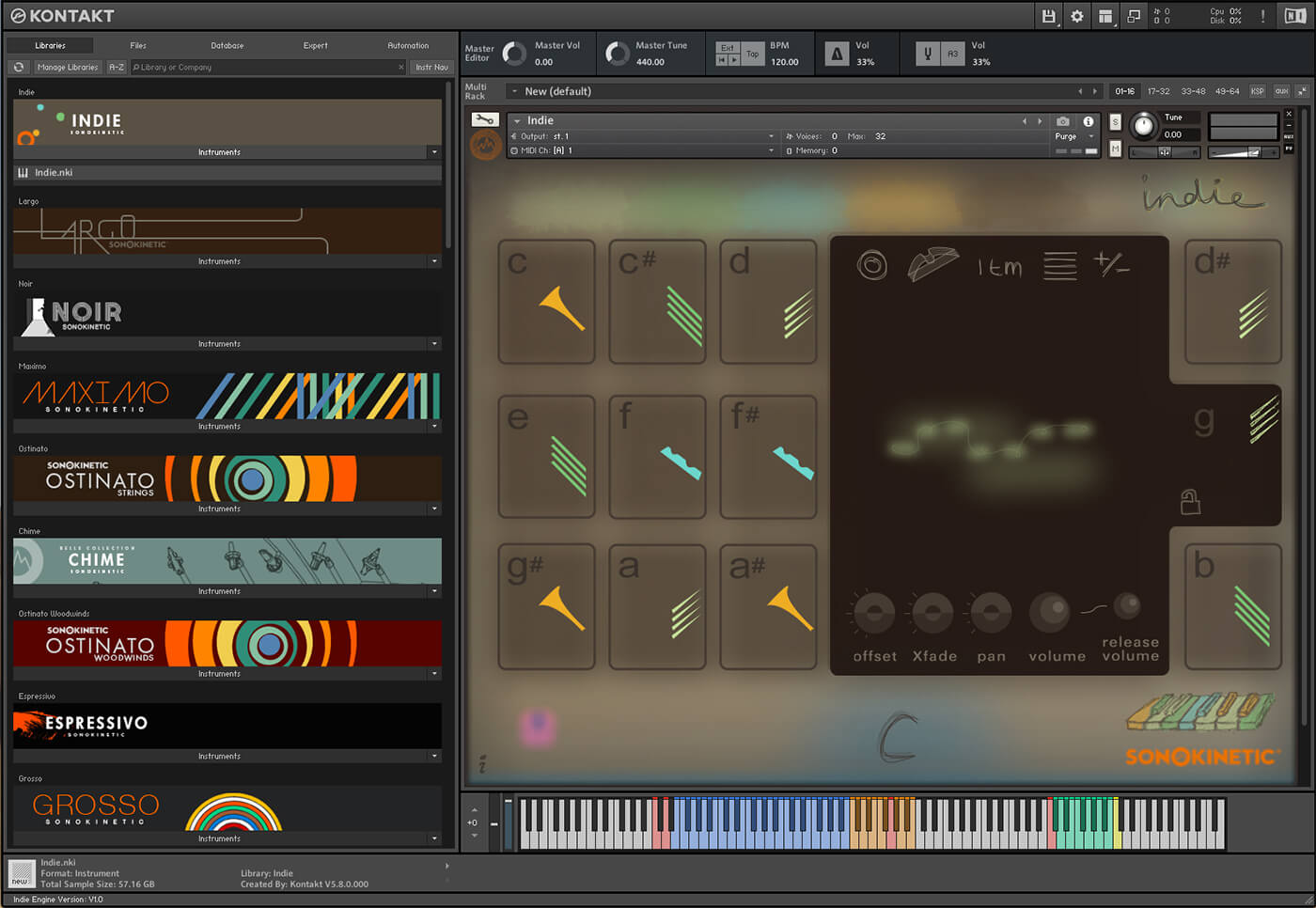 The fact that Indie’s phrases blend so well together, no matter the instrumentation or theme, is no mean feat, and is a testament to the skill of Sonokinetic’s composers. The instrument assembly and scripting is also exceptional and allows this huge collection of samples to be simple and intuitive to play without imposing limits on the harmonic, tonal and rhythmic variations that can be built with its phrases.

The sketch-book styling doesn’t appeal to me very much, but the interface is nonetheless well thought-out and very usable – the phrase visualisations are a lovely touch, too. Overall, then, Indie is a very pleasing sample library that delivers a detailed yet intimate sound which belies its very reasonable price point. 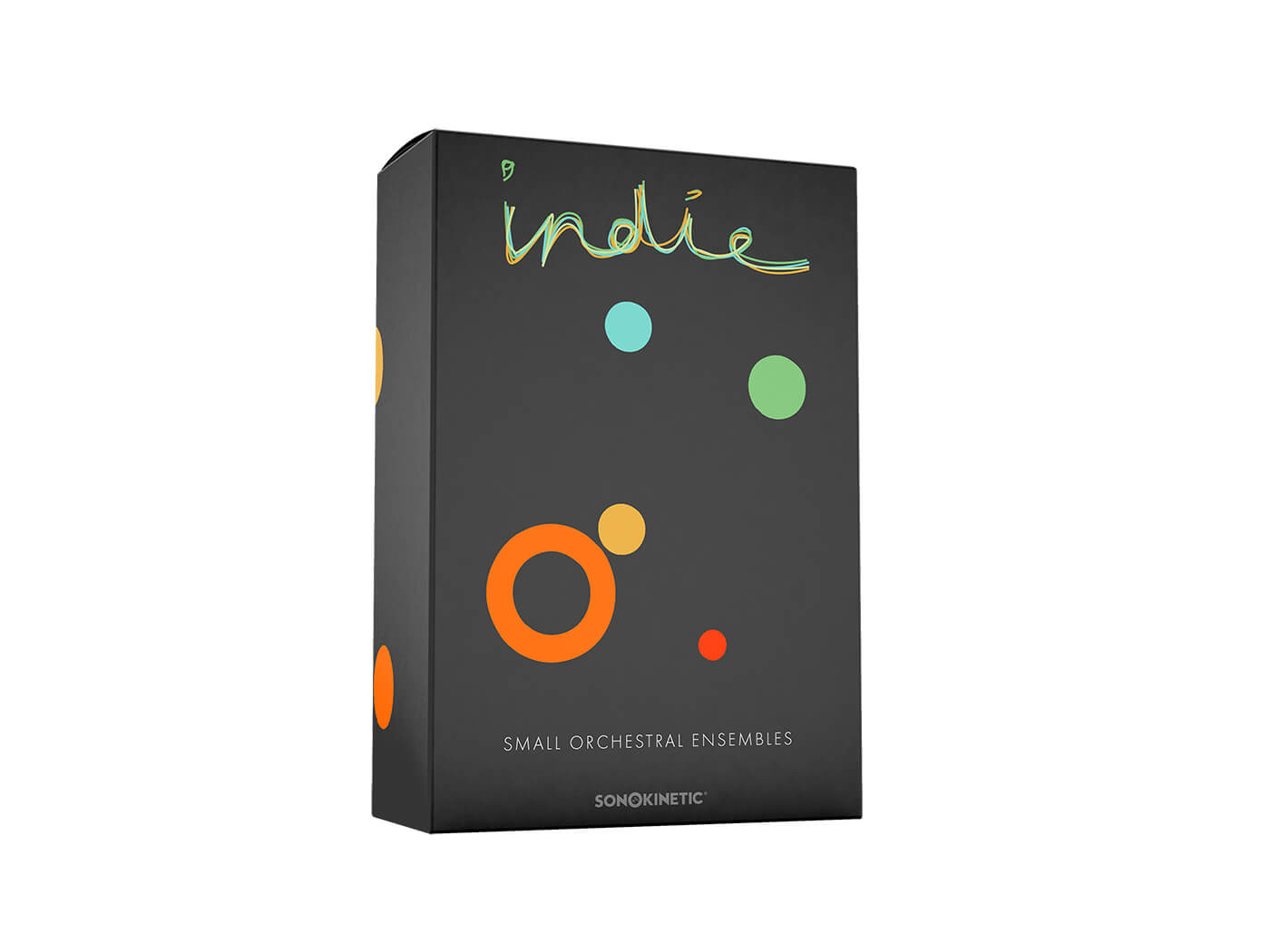 Its rich palette of inter-compatible musical phrases makes the task of creating orchestral incidental music a cinch; add in some other ‘note by note’ libraries, and Indie is perfect for creating a sumptuous bed on which to weave further melodic and harmonic threads. 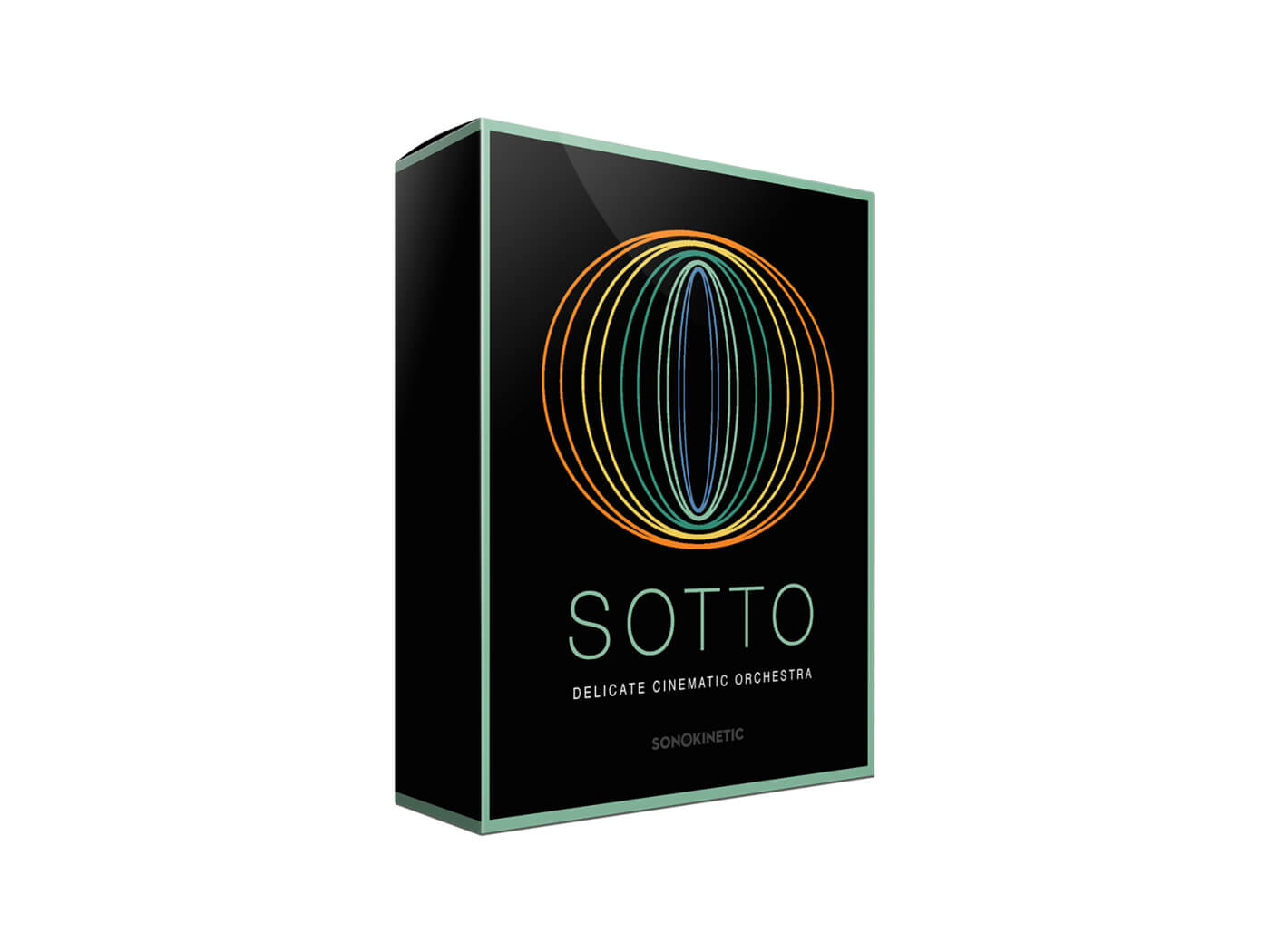 Sotto is one of Indie’s stablemates, and while it samples a much larger orchestra, it also has a close and personal sound. However, in Sotto’s case, this closeness is a function of the soft, gentle playing style it captures rather than the size of the ensembles performing the phrases. 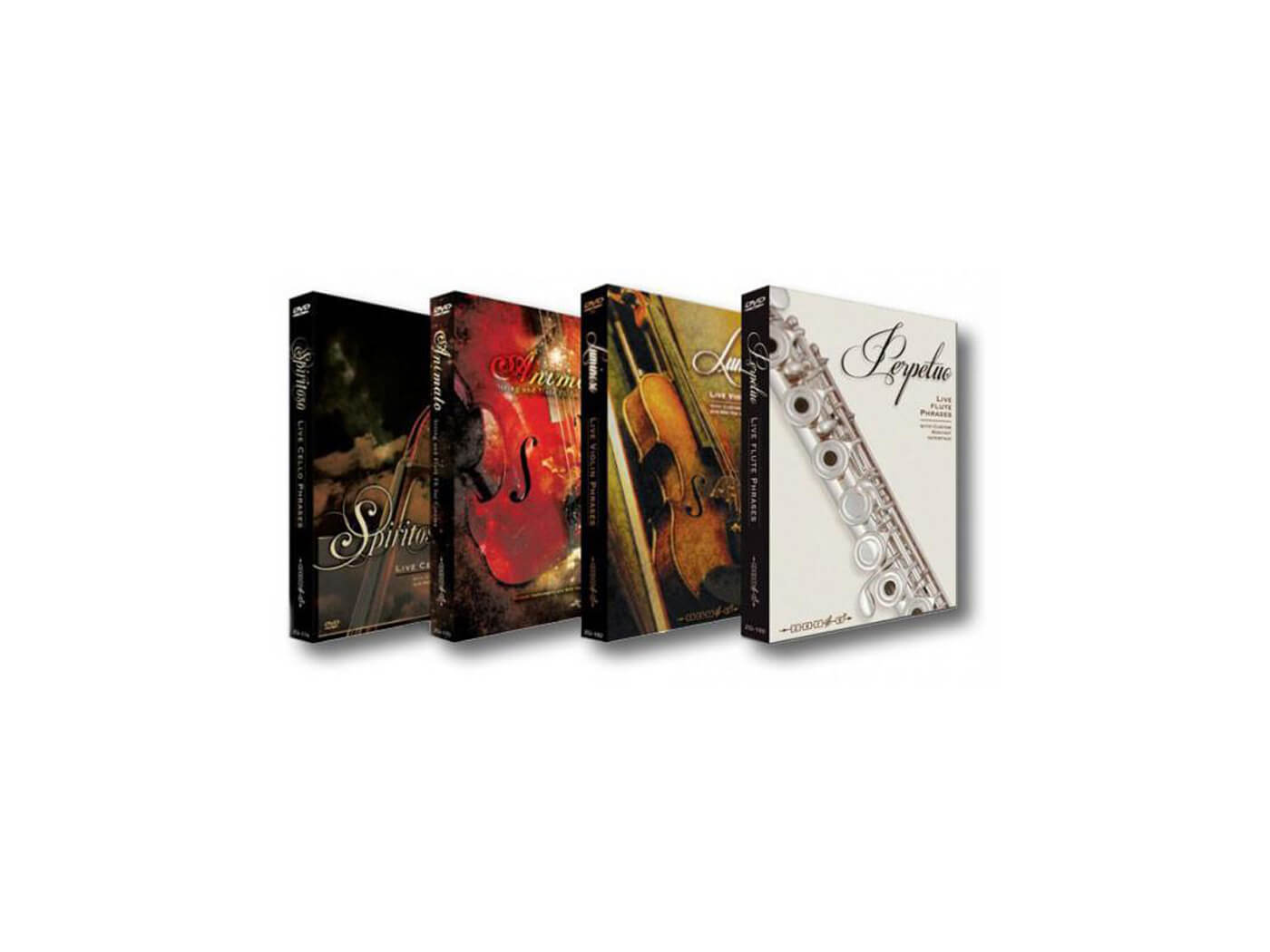