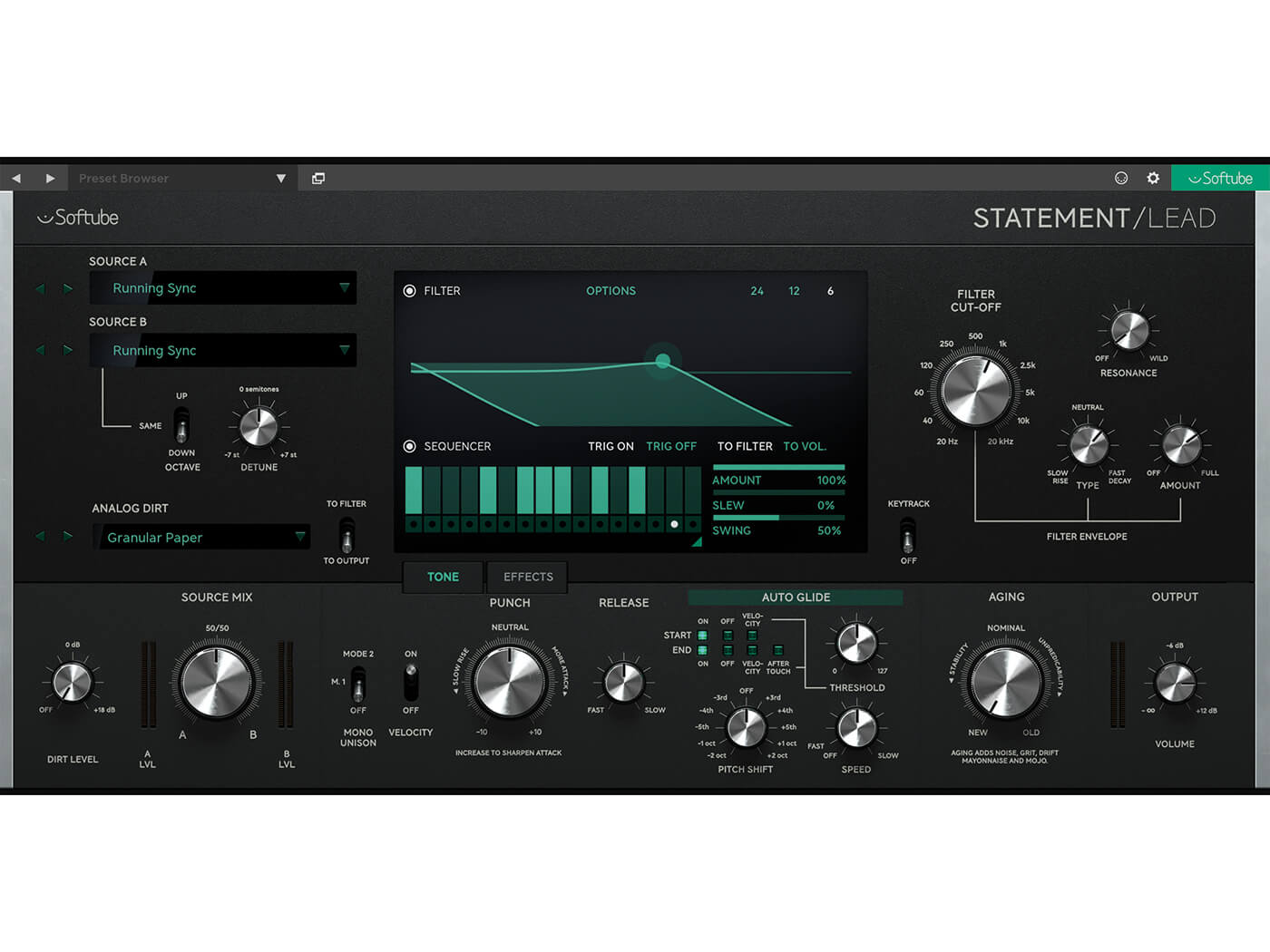 With a long history of modelling professional gear, Swedish company Softube has form in the industry for bringing the vintage stock of companies such as Tube-Tech, Solid State Logic, Weiss Engineering and Trident to the desktops of today’s music-makers in sublime software form. With its latest release, the company  present Statement Lead – a state-of-the-art, user-friendly polyphonic synth that is stated to have ‘the contemporary producer and songwriter in mind’. Our excitement levels have been through the roof waiting for this to arrive, and we’ve been itching to see how it performs

Renowned sound designer Tobias Menguser was once again drafted in to take the same meticulous approach he employed with Softube’s previously released Monument Bass, in fact Statement is the perfect partner to that bass behemoth. His skillful recording of specific rare vintage synths such as the Synclavier, Four Voice, Deckards Dream, the modern Schmidt synth and a variety modular combinations are all selectable textures of Statement Lead.

The sounds are not raw either, Tobias has implemented several processing steps to achieve the complex waveforms heard in the Statement Lead. At your fingertips are 90 waveforms in 11 different categories with each being constructed from a mix of one or two of these waveforms selected via the Source A and B sections. Note though that only the Source B waveforms can be octave shifted or detuned to maximum, minimum amount of fifths.

Additional noise and grit layers of looped material can also be combined with the source waveforms, for example TV noise, recorded storm, robotic noise or transient material such as the aptly named ‘Plastic Attack’ and ‘Metal Attack’ which are all found in the Analog Dirt section, giving leads more grit for a richer, authentic sound. The dirt signal has a choice of going via the filter or bypassed for direct flow to the output. Mix balance controls for the source waveforms and one for the dirt sounds can found elsewhere in the ‘Tone’ section of the synth.

The simple, eye pleasing, intuitive user interface makes it easy to get started, and with quick access to the presets you can achieve polished sounds in no time at all. Softube’s advanced DSP programming is very apparent once we start dabbling with some basic sound design, and it’s quite amazing for its price point.

The layout of Statement makes a lot of navigational sense, waveforms are designed with the source parameters and then pass (or can bypass) the filter section with it’s beautiful analog-sounding low-pass filter with three slope types, 6, 12, and 24 dB/octaves. Users can adjust cutoff frequency, feedback, envelope type and timings which bring a joyous secondary sweep to the filter cutoff frequency (slow or fast) in relation to note on and off timings. The filter cutoff and resonance controls can also be manipulated in the LCD window with a single nodal sweep. Filter slopes, filter and sequencer on/off and options for pitch, velocity and MOD rates are selected in the LCD window. The Modulation sequencer is where most of the fun is to be had in Statement. If kept in Run mode, and with its tempo synchronized to the DAW clock, users can add rhythmic changes on the fly. A simple adjustment in loop length of the sequencer can yield some interesting repetitions, ranging from 1 (no loop) to 16 (all of the available 16 steps), these steps can be set to levels or distinctive on/off triggers which affect filter cutoff or output volume, either stepped or slewed, and with swing to boot! 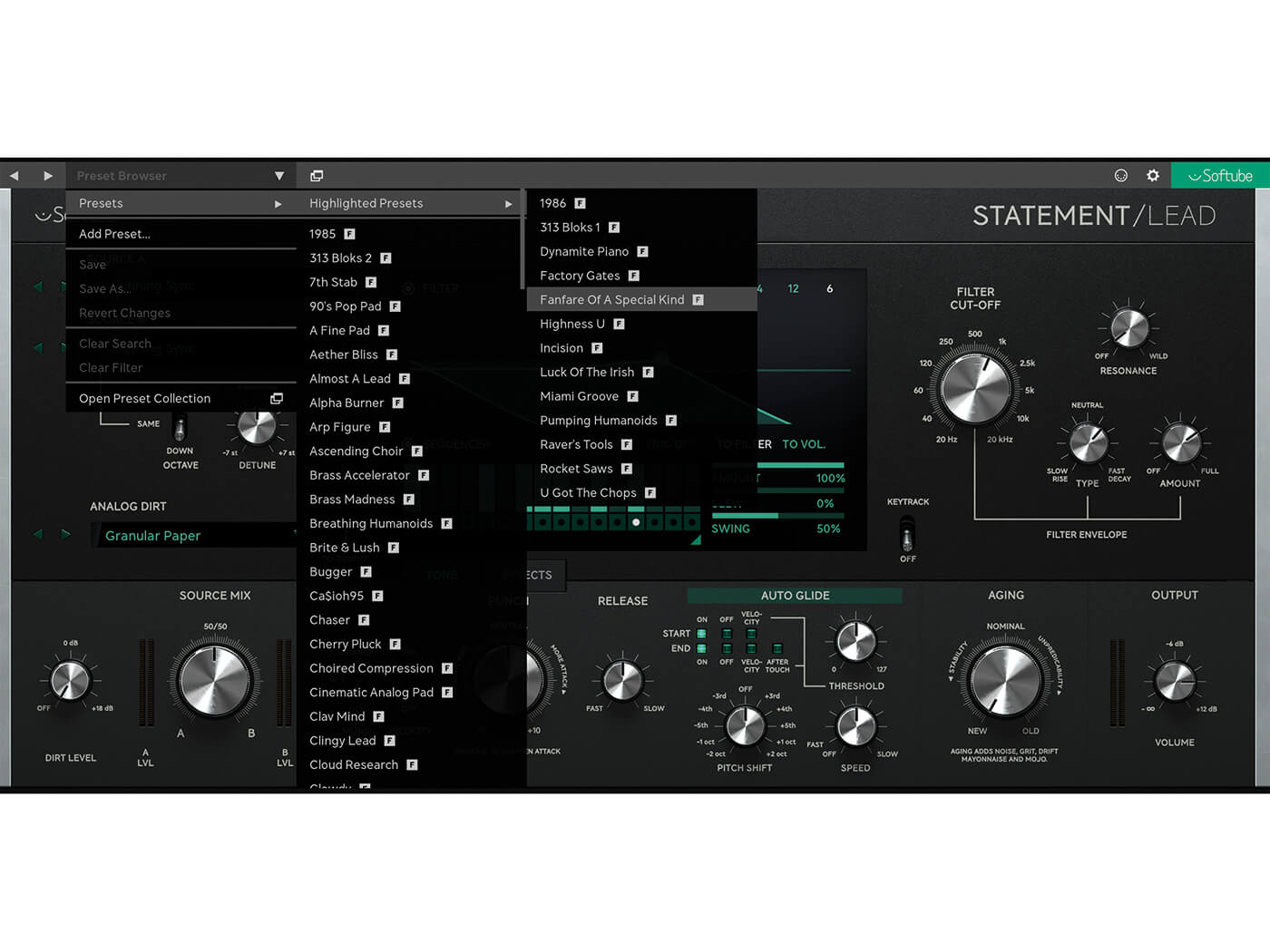 The lower section of Statement’s interface is divided into two menus, Tone & Effects. Source A and B’s mix controls have further Mono and Polyphonic options, with the Unison setting, Statement switches into polyphonic mode, the M1 (Mono 1) setting creates the chunkiest of lead sounds and the Mono 2 mode creates a variations of M1.

Keyboard velocity response (on/off) is located to the right of the Mono/Poly switch. Statement’s impressive sounding amp envelope is disguised as ‘Punch’, this is noticeable when gradually moving the knob – at -10 the volume attack is slow and rising, and at +10 is short and stabby. The release parameter knob has a longer than usual time, great for open attenuated pad sounds. We love the Auto-Glide section, being able to start or end each note with an automatic pitch-bend up or down with additional programmable time and range between minus two octaves to plus two octaves is alluring. The options for triggering Auto-Glide really open it up, for example when velocity is above a certain threshold, or if aftertouch reaches a certain level, or how about if every time a note is played or released, great for inducing more organic analogue richness. The Ageing setting features ‘stability’, ‘normal’ and ‘unpredictability’ choices which allow for control over less stable pitch and more unpredictable attacks, dirt and grit, and again, even more analog goodness, and ripe for some fascinating sound design experimentation.

The built-in Softube effects give users precise control over sound with Drive, Reverb, Delay, Multiband Compression, and Spatialisation. The Delay and Reverb both feature synced pre-delay and ducking, with eight further individual left and right taps. The Multiband Compressor is a smart one-knob solution which adds more weight the further it’s pushed and sounds great. Finally the Spatialisation parameters allow for control of width in both low and high frequency bands. We were impressed with these effects, they have been thoughtfully selected and specifically designed for polyphonic lead sounds and are clearly taken from Softube’s impeccable mixing plug-ins. All of which adds up to a product that is adept at providing some utterly unique sonic qualities to take your leads into a new dimension. 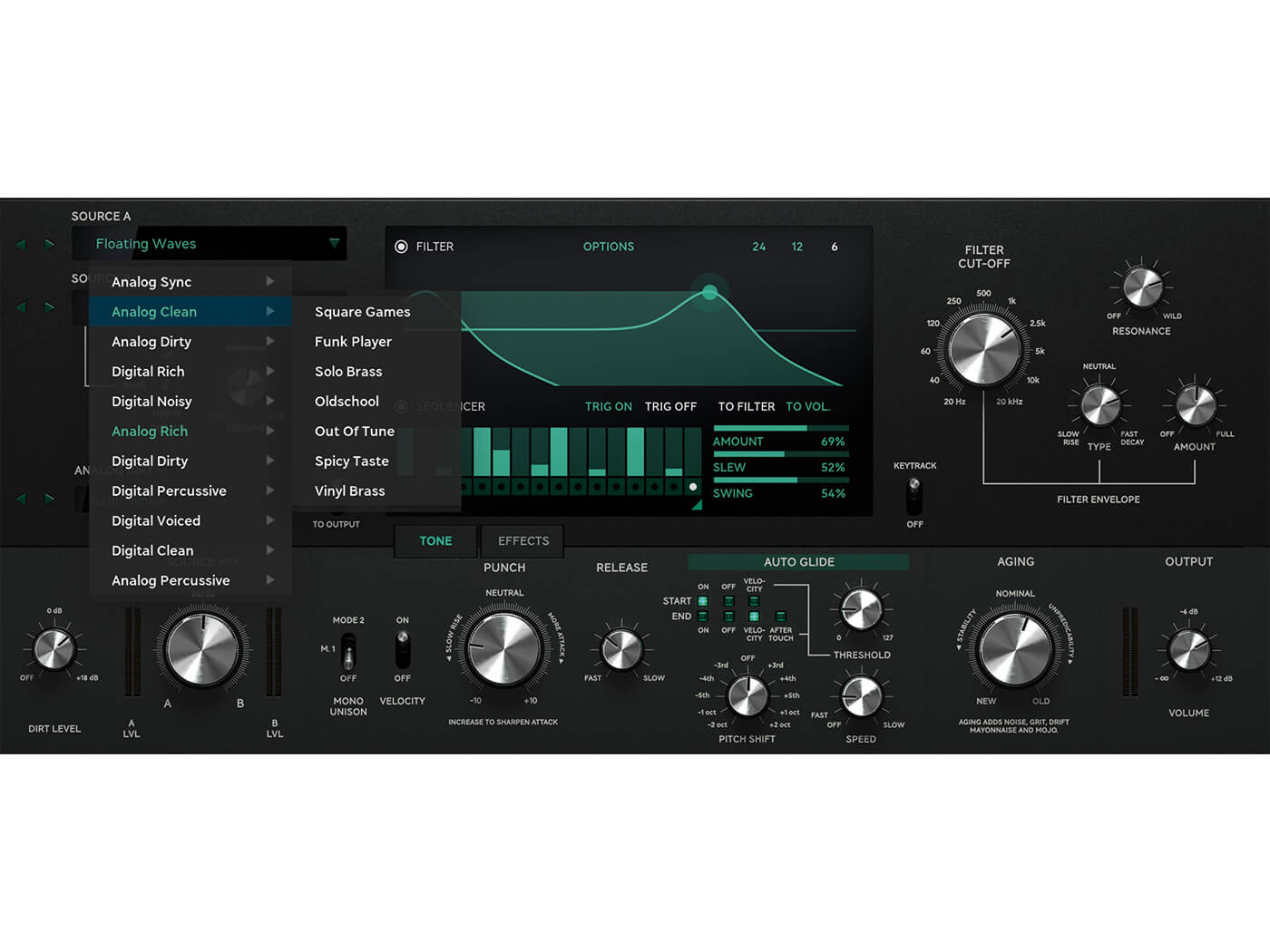 If you are in the game for crafting monstrous sounds for use in the EDM, drum and bass, and house genres then this is a fine addition to your third-party instrument list. But do not be fooled, with some simple crafting, users can also create some beautifully complex, ambient sounding pads and textures that would sit well in any score or soundscape, in truth Statement Lead can meet many songwriting needs. Be aware though, if you are looking for a synthesiser that has multitudes of modulation possibilities, an abundance of filter types and more effects processing than those on offer then it really is not for you, and we’d suggest looking for something not as slight.

Concept is two oscillator soft-synth packed full of features with its main selling point being the highly editable multi-mode modulators in the centre of the UI. Coupled with the effects and the audio input capabilities, users can create complex sound design going above and beyond for a synth in this price range.