Soft synths are getting prettier and sounding better than ever. We test the latest from Softube which attempts to raise the (parallel) bar even higher. 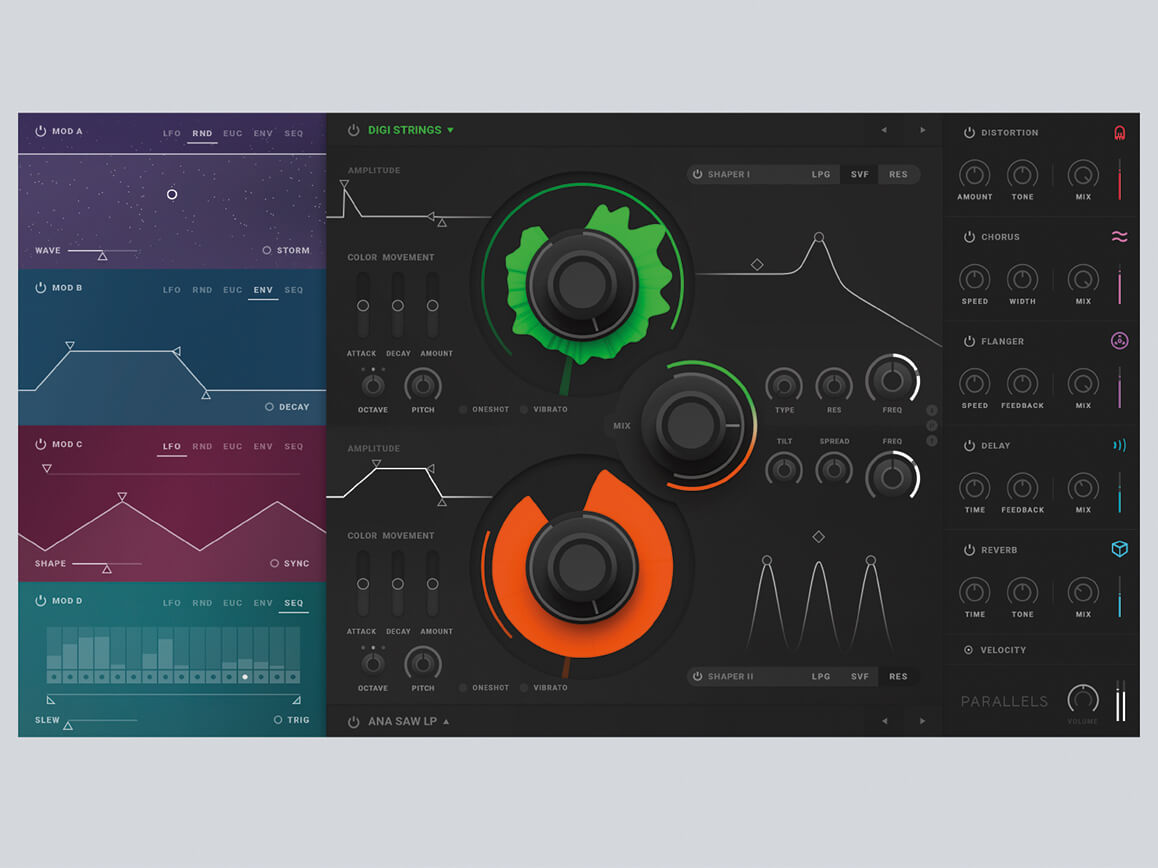 There was a time when soft synths either used to simply be straight emulations of classic hardware synths, or fairly standard variations on the synth theme, albeit with new sonic possibilities under the hood. Of late, though, developers have been further embracing the graphical possibilities afforded by the software environment and making their wares more enticing. Softube’s Parallels is certainly right up there in this regard.

The heart of Parallels is its dual-source engine, with each of the two components made up of one of 100 waveforms. Each of these was meticulously recorded on a range of classic
and rare synthesizers from the famous Stockholm-based Jam Syntotek synth mecca, which is run by Jahan Antoni. As he states: “The basic idea was to create a complex syntheziser for people who don’t usually use complex synthesizers.”

The waveforms are made up from 40 per cent vintage synths and the rest from boutique synths and physical modelling, prototype synths and environmental recordings – casually summarised by Antoni as: “Things I found interesting.” You can then blend the two sources, start each at different points, or loop in different ways. Just on this level, you can quickly get some interesting sonics going, simply by playing with the wavehead position, the three sliders left of each rotary controlling forward play, backward play and looping.

There is a general amp envelope for each waveform above each, used for tightening up the attack time for more percussive or bass-like sounds and so on. The waveforms themselves can be auditioned simply by hitting the one-shot control and reducing each of the three sliders mentioned above. They are an incredibly varied bunch, spread over 11 categories including Analog, Digital, Chord, Como, Stack, Distorted and Chaos. With a main Mix dial plus Pitch, Octave and Vibrato options, we’ve already got a vast 100-by-100 set of options, and all those before we’ve touched upon the rest of the synth. 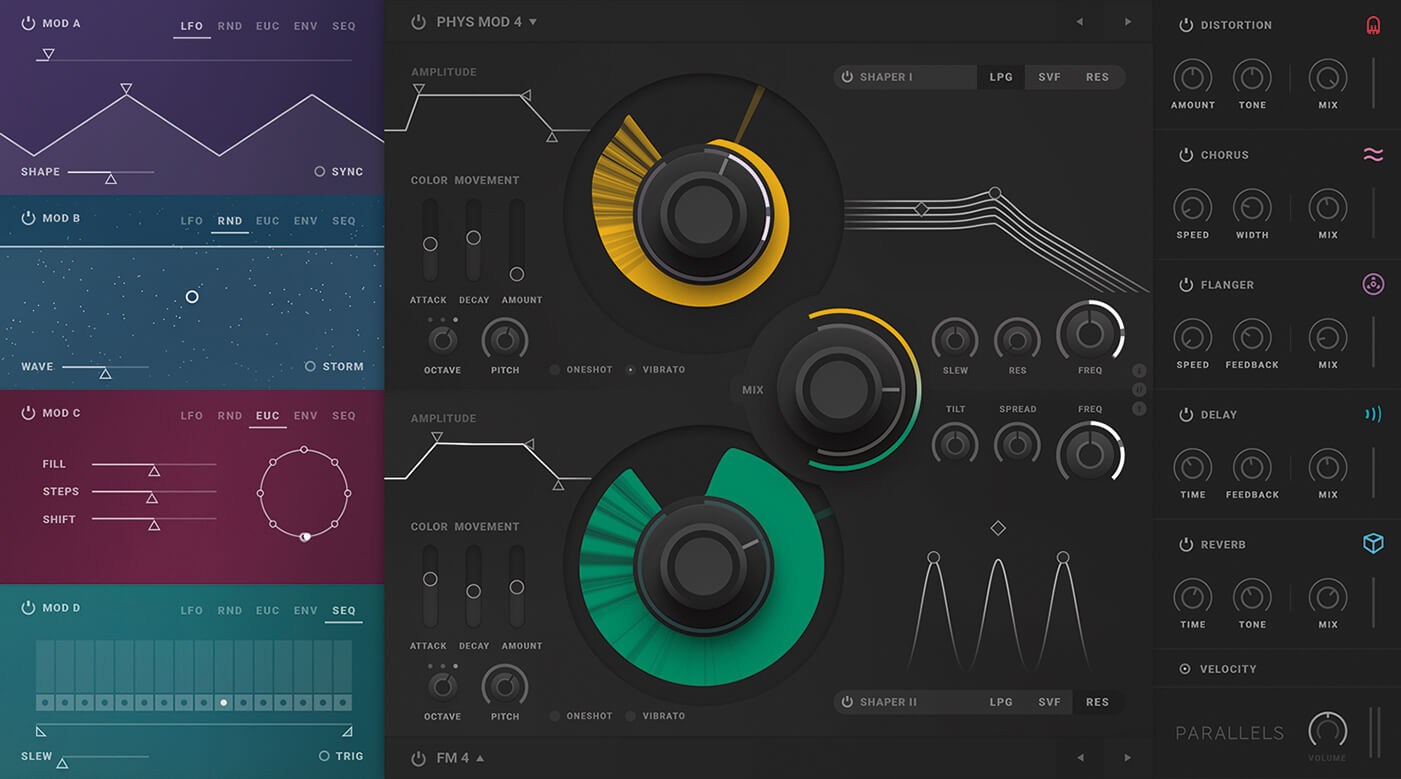 The modulation, or Mod Pod section, is where Parallels hots up even further. You get four modulators of differing colours that you can turn on and off, each with five sources: LFO, Random, Euclidean, Envelope and Sequencer. Select each one and you get a corresponding set of sub features to edit. Then hover around a feature on the main synth to assign one of the four Mod Pod blocks to that control. Easy peasy.

A quick run through each and you get a fairly standard LFO with adjustable rate, shape and sync options – some nice sweeping waveforms to be had here. The Rnd option introduces some graphical rainfall, indicating its randomness, which can be both increased and filtered, and a Storm option offers yet more unpredictability. The Euc (Euclidean) modulator offers a more rhythmic pulsing for beat-type modulation, with which you can control factors like the number of beat points, the swing and the start point – it’s certainly one of the most interesting modulators here.

Next up is the Env (envelope) modulator which applies a standard ADRS to whatever parameter; and finally, a step sequencer which lets you set a modulation level over a defined number of sequencer steps. Again, you get up to four Mod Pods and applying them couldn’t be simpler – you have a set of colour-coded blocks for each destination, which you can easily select and manage.

All in all, this is a surprisingly capable modulation section. I say ‘surprisingly’ at this point because the number of sources is not that great, but that’s something that actually invites you in; some modulation matrices are so fulsome and complex that they can deter you from actually using them. Here, you switch on, select, apply, job done, and it’s very easy to get complex stuff going, very simply. 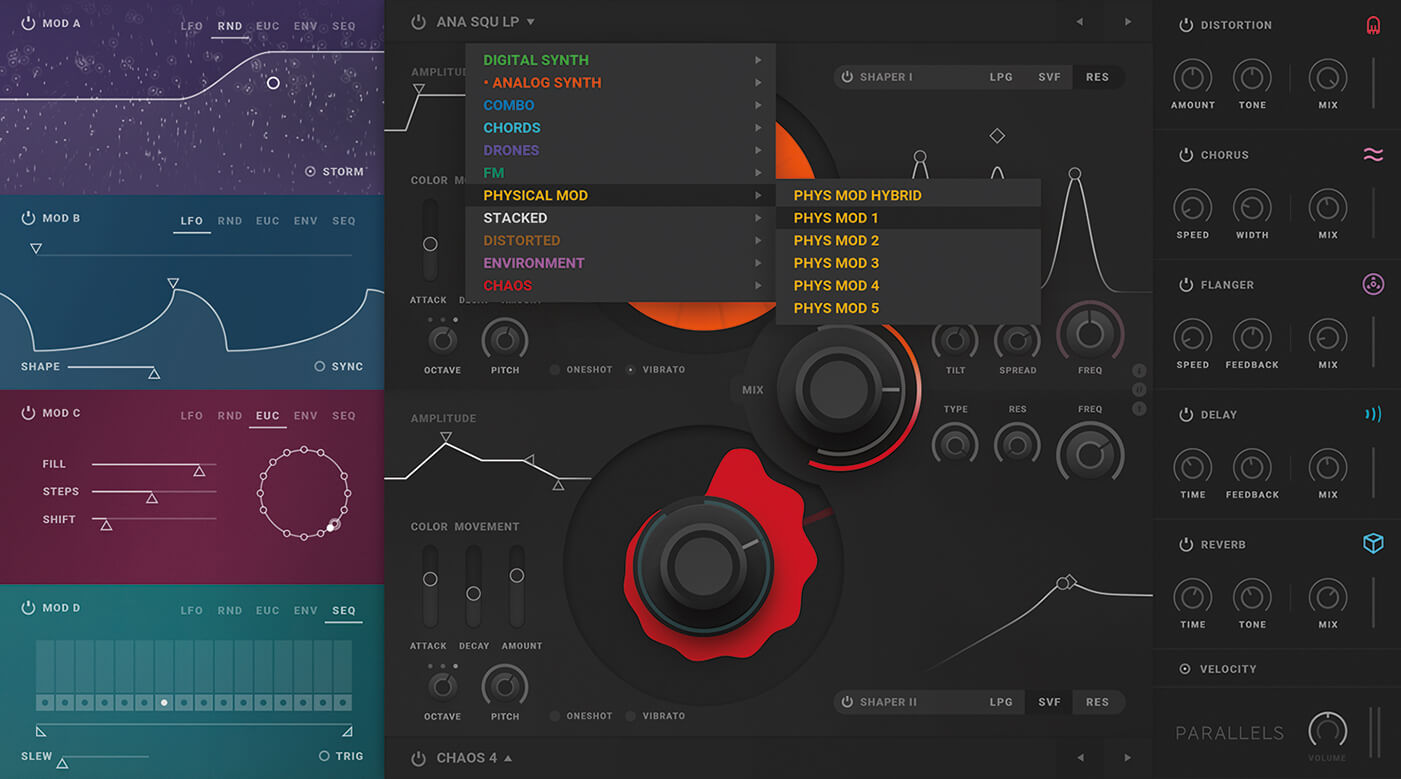 And that is really the message I’m getting from Parallels so far. It’s a sophisticated-looking and sounding beast, but all of that comes with a straightforward architecture that offers these complex sonics in a very inviting way. This philosophy continues into the filter section, with two waveshapers that deliver three types of filter: State Variable (with high-, low- and band-pass options), Low-Pass Gate (for more growl and vowel accented sounds) and Resonant Peak filter (three independent band-pass filters for creating whooshing and more dramatic complex effects).

Again, and I can’t seem to say this enough, it’s reasonably complex in scope, but simple in operation, with click and drag pointers for parameters such as Frequency, Resonance, Spread, Tilt and Slew. The results are as sonically dramatic as the changing visuals and it soon become obvious what is going on. If you’re not familiar with how these different filter types work, never fear – as you’ll soon learn by tweaking, experimenting and listening to what is onscreen.

The final section in Parallels, as we go from left to right, is the effects area. You get five analogue-style effects: distortion, chorus, flanger, reverb and delay. Each has three parameters to tweak (and all of these can act as destinations for the Mod Pods to the left). In the main, these are much as you’d expect, with the distortion block offering suitable bite and snarl, the chorus and flanger throwing up width and swirl, and (my favourite) the reverb offering a huge and lovely space if you want it to – it really has to be heard on its maximum tail setting to be fully appreciated.

Really, though, these effects are the icing on the cake – they may be pretty simple, but they’re a useful addition to an already deep set of controls. They are the ideal end point to the Parallel process, giving the sound of the synth a final sheen. And that sound, overall, is one of surprising girth – you can really get a lot out of the synth for a whole host of genres. 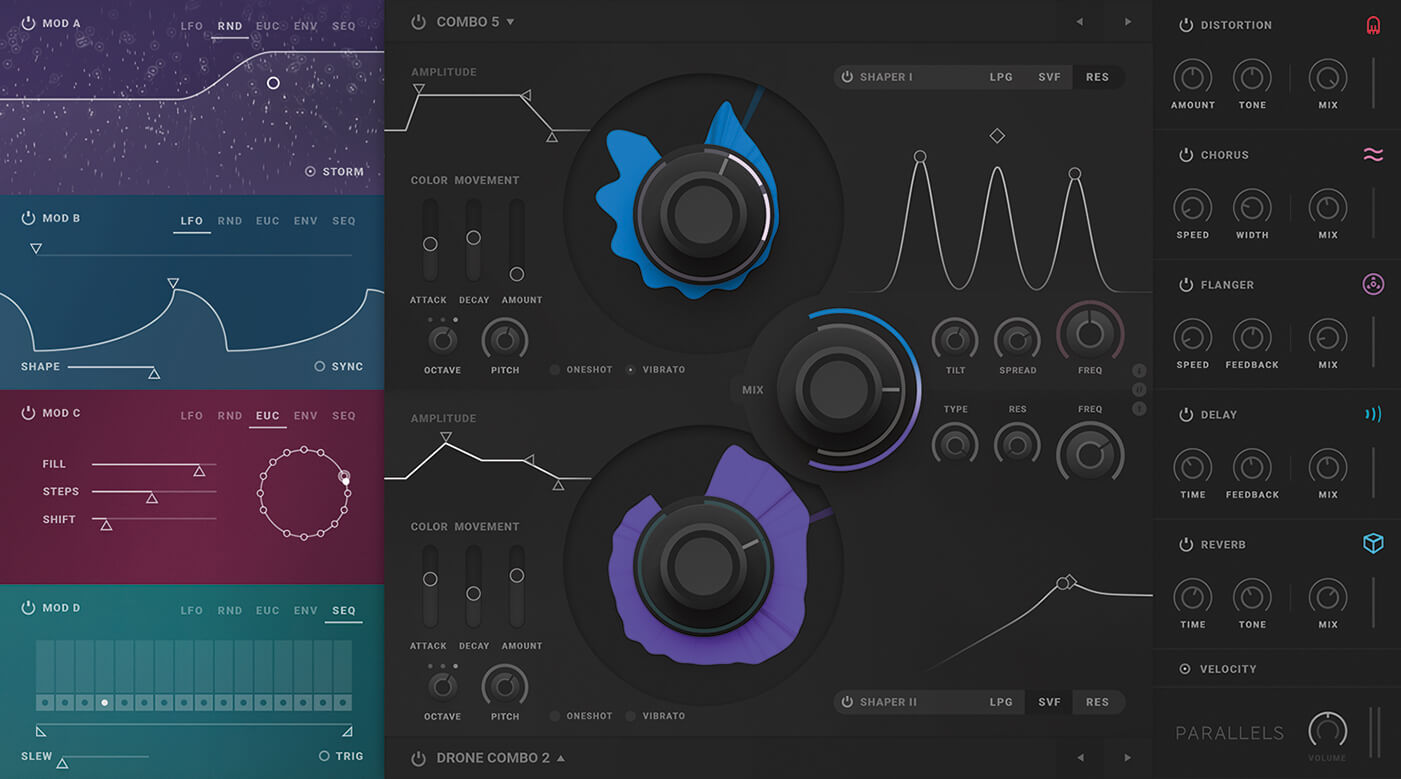 Where it excels, I think, is in the creation of pads and atmospheres, sounds with lots of movement (thanks to the Mod Pod modules) and some very special ambiences (thanks to the reverb and the great source synth and environmental sounds and waveforms. It’s capable of being beautifully lush, but can also be punchy and contemporary, but most of
all, you’ll want to get in and dig around, creating your own sounds with the fantastic hands-on options.

It’s easily as enticing as two of my recent favourite synths – Arturia’s Pigments and Audiaire’s Zone – in this regard and it also shares other fantastic sonic, graphic and programming features with them. I’d even go as far as to say it’s the easiest synth to use out of all of them; and it’s also a great one to learn from if you’re just getting into synthesis.

Overall, Parallels has a bit of modular, spades of cool features, lashings of ease of use and a great sound. That should be enough to recommend it, but it also has that one aspect that separates very good synths from great synths: an open invitation to edit. You’ll simply want to get in and explore the wavetables – easily worth the trip, I assure you. But when you start ladling on the rest of the features (the Mod Pods especially), you’ll realise how far you can go with your sound manipulation, and how easy the journey is to get there. People talk about this being a great time for hardware synths, but software plug-ins are right up there. 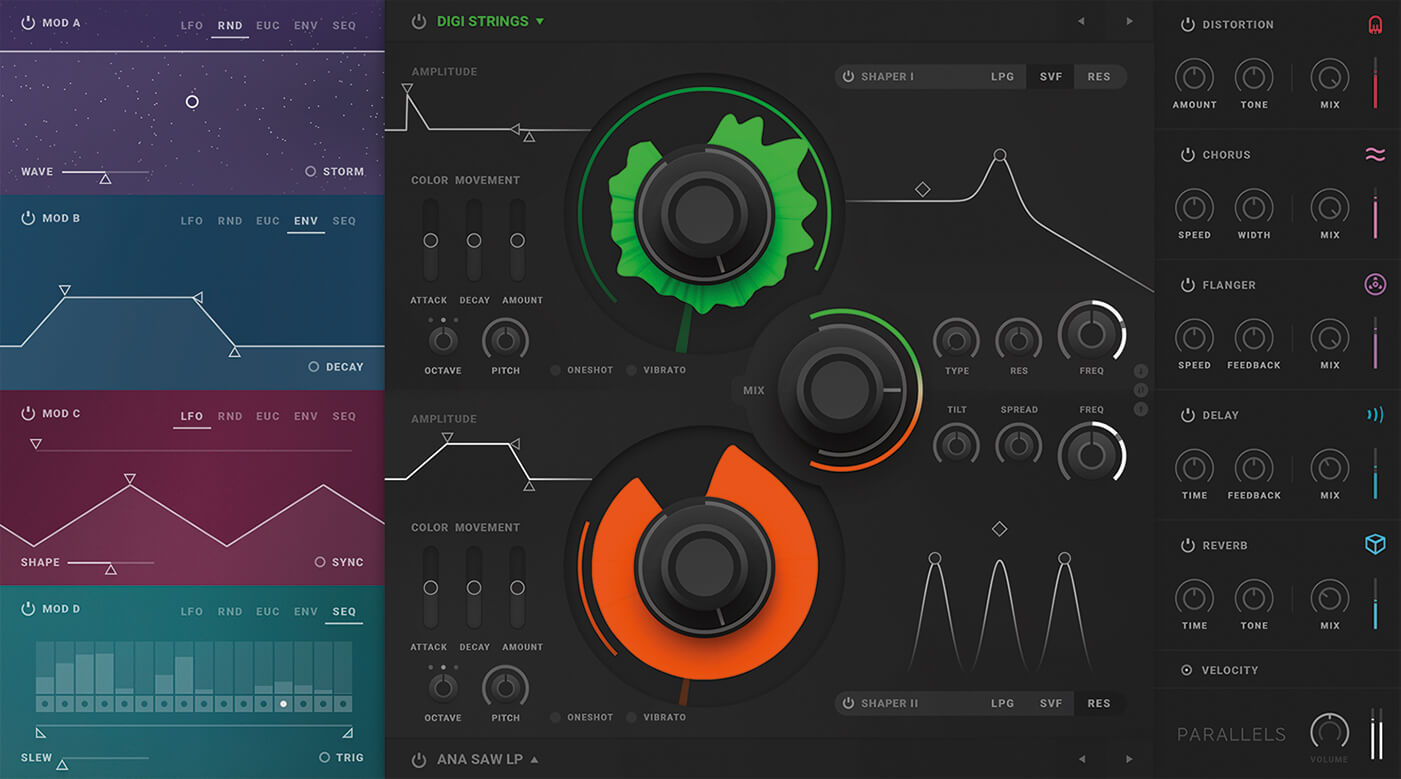 The question of whether you really ‘need’ another soft synth is probably one you already know the answer to, and I’m afraid it’s a no! So perhaps the question should be: ‘Do I need a synth I’ll actually use above all others?’. In that sense, Parallels is both approachable and as complex as you want it to be. It’s also sonically varied, which all adds up to it really standing out from the crowd. 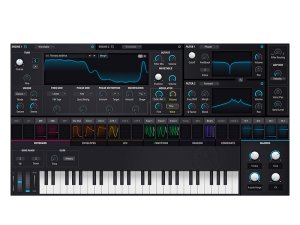 I reviewed this synth recently and while not so much a direct alternative in terms of structure, it does feel similar in terms of its welcoming interface, lots of great colour coordination, easy modulation, sonic flexibility and overall ease of use. 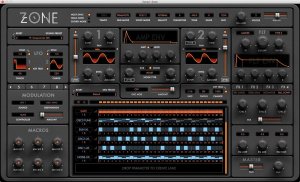 Similarly, Zone is another synth I’ve recently looked at that sounds as good as it looks. It does wavetable and parameter sequencing for dynamic and evolving results and atmosphere by the bucket load. Just one of a new breed of visually enticing soft synths.