Having turned the iconic Minimoog into software gold, Softube has now set its sights on Roland’s iconic Juno-106. We don our luminous socks and fire up the Model 84. 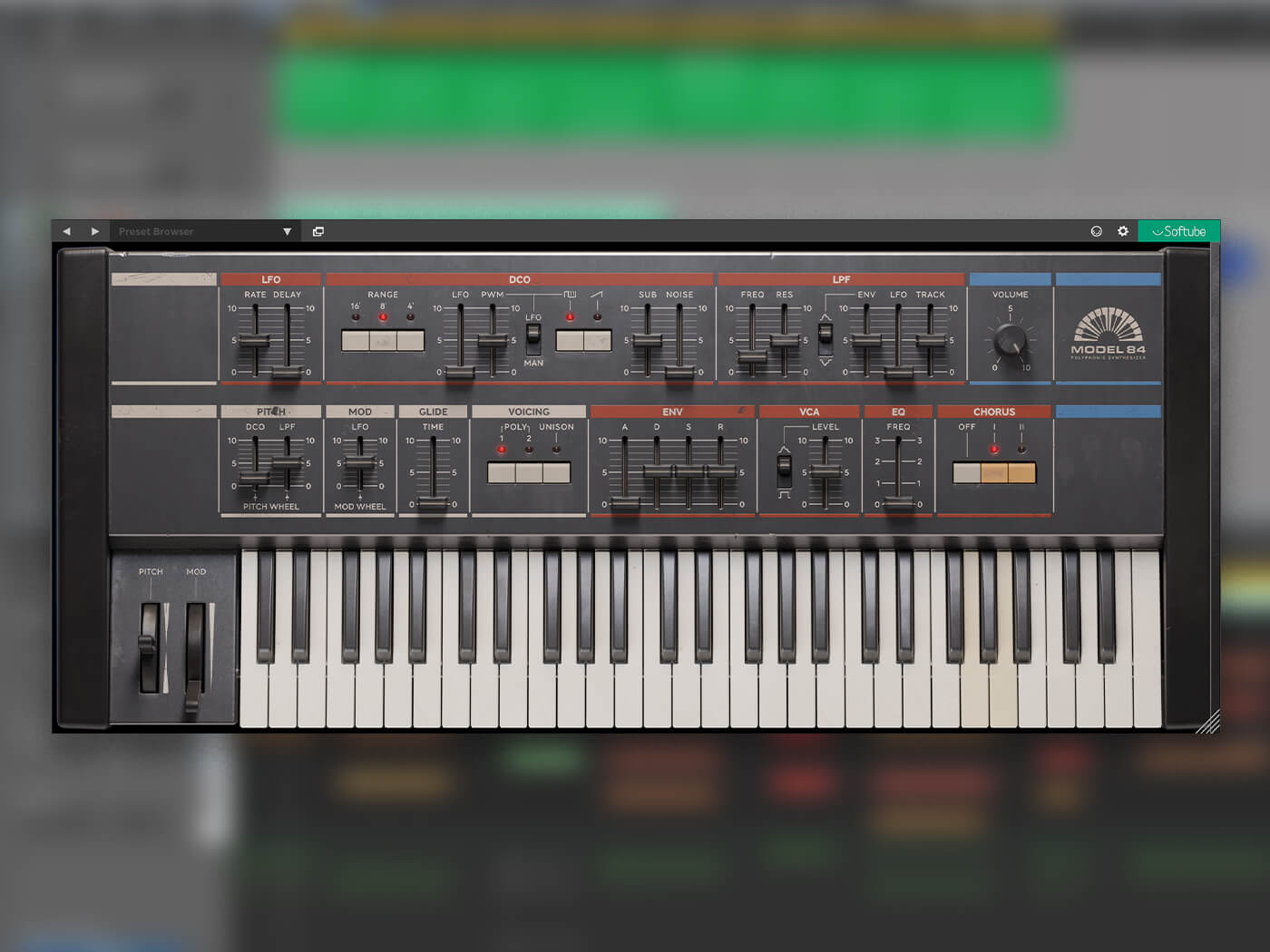 ⊖ None beyond the limitations of the original instrument

An extraordinarily accurate recreation of a synth legend. The nuance and classic nature of the Juno-106 are in full evidence here, albeit with a smattering of 21st-century extended functionality. It’s a love letter to 1984.

In 1984, Roland released the Juno-106 to bring its predecessors, the Juno-6 and Juno-60, into the new digital, connected future. The Juno-106 offered MIDI (still relatively uncommon at the time), extended patch memories and, among other things, a slightly modified approach to filtering and tone control. The Juno range of synthesizers is rightly revered for its sound, and continues to be used extensively in pop and dance music productions. Its quieter, more introspective side is also popular with media composers.

Who better to take on the job of its software emulation than Softube, whose pitch-perfect emulation of the MiniMoog – its Model 72 Synthesizer System – has garnered such a devoted fanbase. Now, the Model 84 Polyphonic Synthesizer is hoping to do for Softube what the ’72 did for Moog’s best-loved.

Model 84 comprises three parts: the polyphonic synth plug-in, a collection of modules for Softube’s Modular plug-in system and a separate chorus module for use in the Amp Room suite.

We can’t ignore that Model 84 looks beautiful. There are tiny scratches in the paintwork, finger-print scuffs below the instrument’s logo and a couple of keys that have yellowed due to age. While none of these touches affect the sound, they significantly enhance the experience of playing this instrument; Softube has clearly gone to a lot of trouble to inspire visually.

The interface is customisable in a few ways, too; you can scale its size, hide its keyboard (great for laptop users), and open a side panel on the right for additional functionality. Otherwise, the layout will feel instantly familiar to anyone who has played a Juno-series synth, albeit with a few subtle tweaks.

Part of the Juno’s appeal is how simple it is to programme, which is mainly due to its sonic structure. The DCO section offers sawtooth and square waves, with the latter offering variable pulse width. Range buttons select the octave for the oscillation section en masse, and you can enable both oscillators simultaneously for fuller sounds. The sub wave slider introduces another sound source an octave below the primary waves, and white noise also gets its own level control. Glide also gets its own slider, and the Juno’s original voice modes (Poly 1 and 2, and Unison) are also ably modelled.

In addition to filter cutoff and resonance, you can introduce the envelope, LFO and keyboard tracking as filter modulators via their own sliders.

While modulation and pitch-bend slider assignments on the Juno-106 were new and exciting back in 1984, the arrows and lines indicating what was possible here weren’t immediately intuitive. Softube seemingly agrees, as dedicated Pitch and Mod sections are now in place to let you decide the pitch bend range and how the pitch wheel will affect the filter, alongside a separate modulation wheel assignment to the LFO amount. Softube has taken the hardware’s spirit of simplicity, clarifying navigation making programming even quicker.

The Juno-106 features a single ADSR envelope, with the VCA slider next to it either allowing these sliders to control volume behaviour or, via a toggle switch, you can choose a squarer, more electric organ style volume shape instead. The same ADSR module is assignable to the filter section. The High Pass Filter section of the original design is rebadged as EQ which is, in fact, a better description of its capabilities. Softube’s model has the characteristic low edge ‘nudge’ offered in the zero position, with low frequencies progressively attenuated as you push upwards through the three other positions. The twin chorus engines round out the front panel parameter set, complete with authentically subtle instability and inherent noise.

Click on the right-hand edge of the display, and a side bar appears to offer further functionality, all of which provides sensibly modern options. You can control the amount that the filter, amp and pulse width are affected by velocity, modulation or aftertouch. You can also sync the oscillators in unison mode to bring enhanced sonic punch and attack. Impressively, this improves on the occasionally phasey behaviour of the hardware.

Two things matter about the Model 84’s sound: how faithful is it to the Juno-106, and how relevant is that sound in modern productions? In short, breathtakingly so and hugely.

The sound is almost a perfect facsimile of the Juno-106. This is true both to the naked ear and when you compare frequency graphs between the original’s hardware and Softube’s software. There really is very, very little to choose between them, and as each original Juno sounds subtly different anyway, the sonic lines between software and hardware blur further.

In terms of its relevance in modern music production, the Juno’s strong points have settled into synth folklore. The synth has justified its place in the music production world, nailing Dua Lipa-style 80s-tinged pop, classic House stabs and Olafur Arnalds-esque super-atmospheric pads. Its basses are iconic, its plucks even more so, and those pads, which delay the onset of the LFO before adding vibrato wildly, are the sound of more records than you could shake your rhythm stick at. Everything you’d reach to a Juno for sounds wonderful here, and the Model 84 deserves to be every bit as much of a success as the Model 72.