Can the Swedish circuit modelling experts capture the magic of the Minimoog Model D, or even make it better? 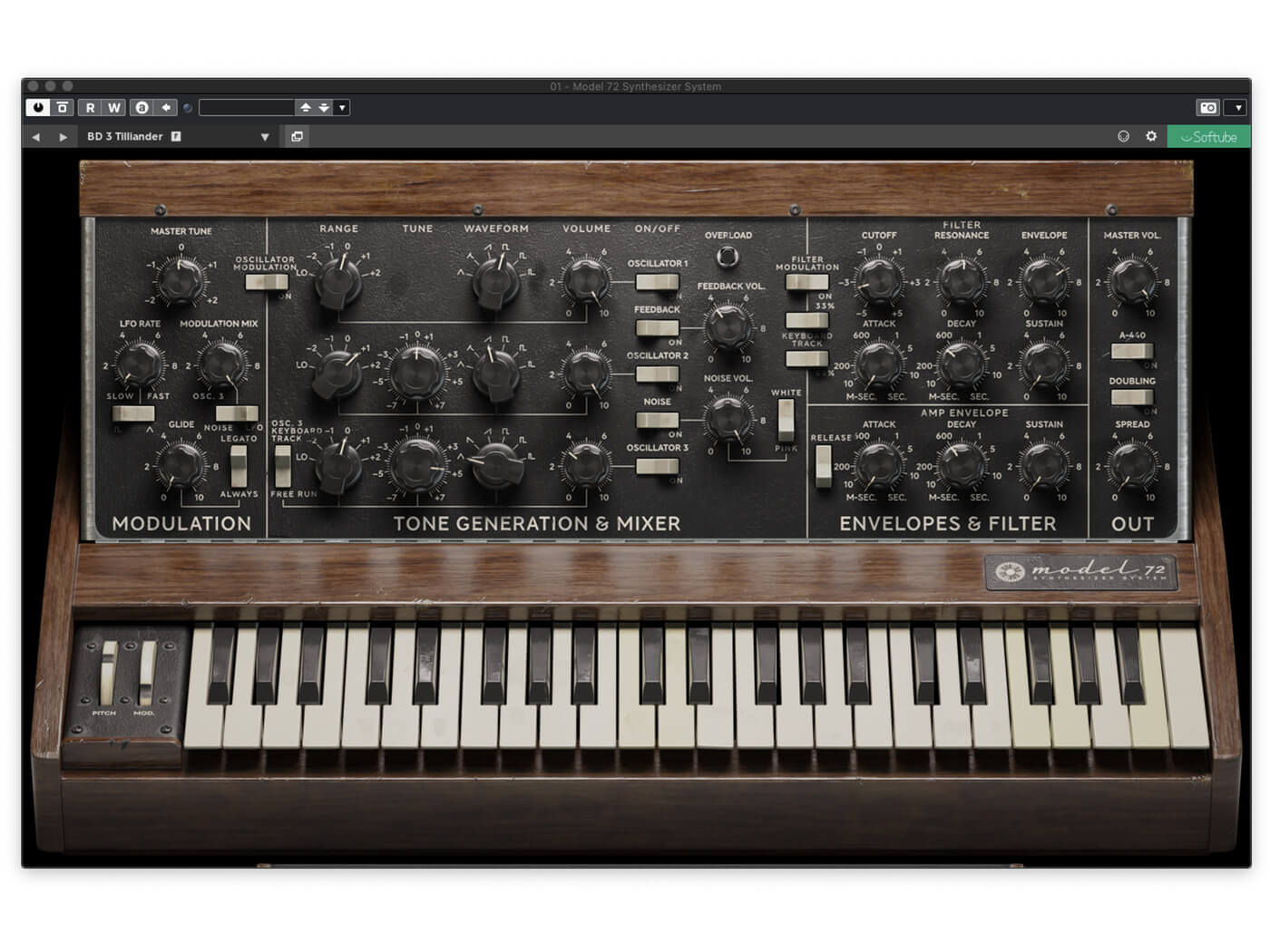 Probably the most famous – and certainly the most respected – name to come out of the world of analogue synthesis is Bob Moog. The instruments Moog designed and built, beginning with his original modular system in 1964, have been the benchmark against which every other subtractive synth since has been measured, and a large portion of this appeal comes from the legendary Minimoog Model D (models A to C having been prototypes).

Originally produced between 1970 and 1982, the Minimoog was much more affordable and far simpler to use than the megalithic room-filling modular systems on which the synth’s innards were based. This made the Minimoog an instant hit among musicians, a popularity that has endured to the extent that, if any instrument can claim to be the most well-known synthesizer of all time, it’s this one.

Which brings us to the subject of this review, Softube’s new Model 72 synthesizer and effects plug-in for VST, AU and AAX-compatible hosts. The Model 72’s marketing literature tells us that the instrument has been modelled from a legendary vintage monophonic synthesizer introduced in 1970. More specifically, we’re told the source synth in question was produced in September 1972, hence the Model 72 name.

The synth that must not be named

Softube goes to great lengths to avoid mentioning the presumably licence-fee-inducing Minimoog name. Still, a cursory glance at Model 72 leaves no doubt that the “vintage monophonic synthesizer” that the literature refers to is the Minimoog.

Closer inspection reveals that the Model 72 is more than a direct copy of the Minimoog. Beside aesthetic difference, there are more controls than expected because Softube has made some changes to the classic Minimoog design, adding functionality that wasn’t present in Moog’s masterpiece.

For those unfamiliar with this vintage icon, the instrument is a three-oscillator monophonic subtractive synthesizer. The first two oscillators share the same set of six waveforms: triangle, sharkfin (similar to a saw wave), saw, square, pulse and narrow pulse. The third oscillator replaces the sharkfin waveform with a reverse saw wave. All three oscillators can have their octave switched from -2 to +2, and have a low-frequency mode. This is especially useful on oscillator three, which can be used as a modulation source and, for this reason, can also be switched to operate at a fixed frequency. The oscillators are complemented by a noise generator that can be switched between white and pink noise.

The Model 72’s filter is a 24dB/octave low-pass affair that can, like the Minimoog’s, achieve self-oscillation. The filter has its own dedicated ADS (attack, decay, sustain) envelope, as does the amp section. Softube has added the option to enable a release stage that affects both envelopes, and this uses the envelope’s decay time as a release time also.

When running as an instrument, the Model 72’s filter can be fed back on itself, creating some pleasingly meaty and angry under- and overtones. But when running as an effects plug-in the feedback stage becomes an external input instead, allowing you to mix your own sources with the synth’s oscillators and feed the results through the vintage synth filter and envelopes. 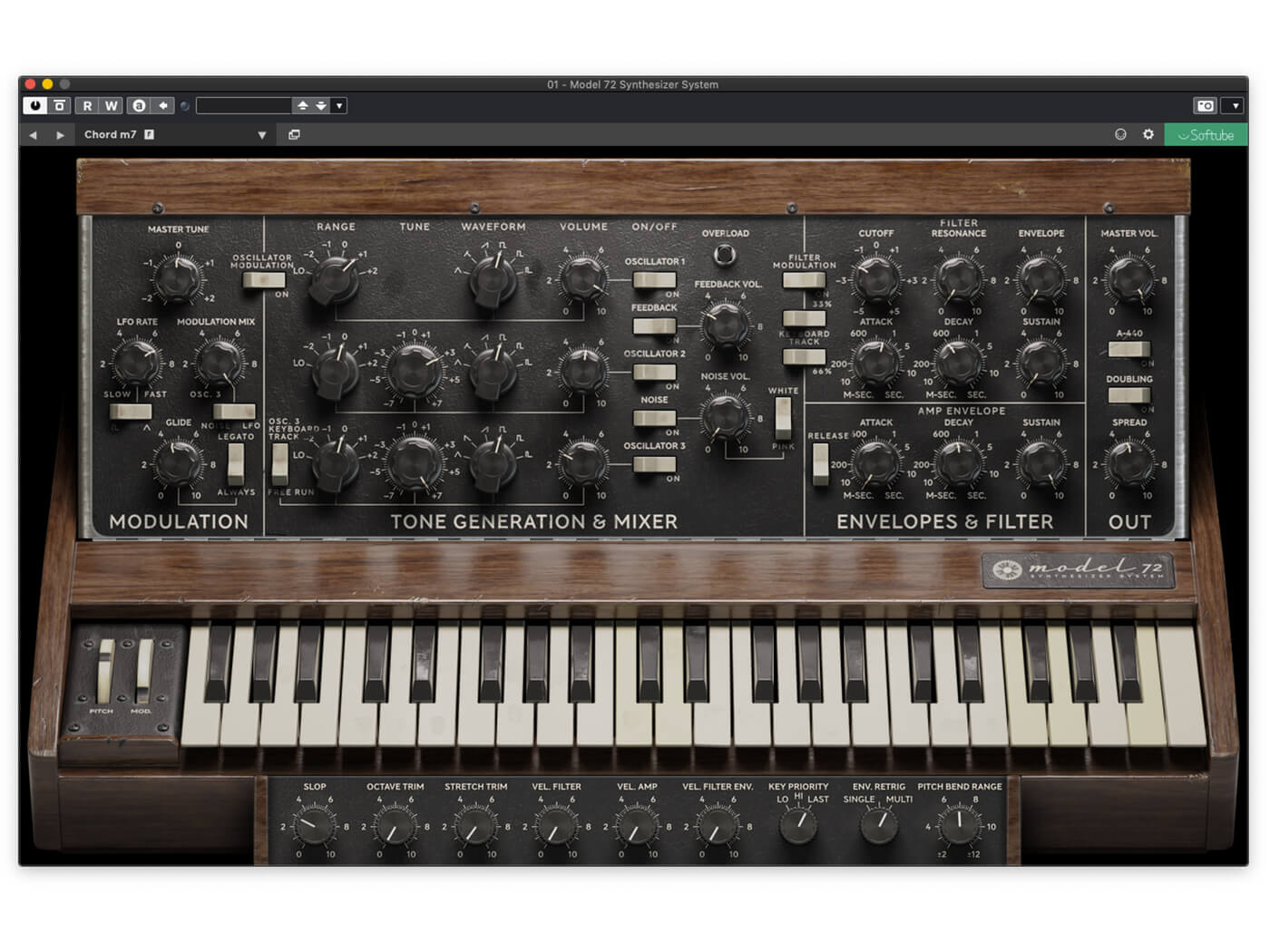 The Model 72’s modulation section equates to the Minimoog’s Controllers section and deals with master tuning, LFO and glide/portamento. Another of Softube’s enhancements resides here in the form of a standalone LFO. The original vintage synth allowed you to dial in a blend between the oscillator-three and noise-generator signals, and use this as a source for pitch and filter modulation. The Model 72 has this arrangement too but allows users to switch to the new standalone LFO generator in place of oscillator three. This frees up oscillator three to add its voice to the sound you’re creating. The Model 72 also includes keyboard tracking modulation of the filter, so that sounds can be brightened as they’re played further up the keyboard.

Softube’s last significant addition to the basic Minimoog recipe is a doubling function, which creates a second, slightly detuned copy of the synth’s sound, resulting in a thickening chorus-like effect, with its stereo width controllable too. But there’s more to Softube’s tinkering. Clicking the area below the keyboard opens the Expanded View. Here you can dial in velocity sensitivity for the filter, filter envelope intensity and amp. You can also change the key priority, envelope retrigger mode (legato), and adjust the pitch-bend range. Softube has even provided control over oscillator pitch drift – a common quirk of vintage voltage-controlled oscillators – and how accurate the oscillator octave switching is (voltage-controlled oscillators are often inaccurate when switching octave). These options all add to the authenticity of the analogue sound.

Some may see Softube’s decision to add new features to the tried, tested and much-loved Minimoog design as sacrilegious. In reality, though, these additions blend well with the classic features. They allow the instrument to respond to performance nuances in new ways, which adds a novel layer of expression on top of an already tremendously expressive synth design. Put simply, Softube’s additions complement the vintage hardware’s beloved capabilities and sound.

And what a sound. Softube has a strong reputation for its circuit-modelling work, but with the Model 72, the company has excelled itself. The synth pumps out the same massive, rich bottom ends, the same creamy, expressive mids, and the same sizzling highs as its unnamed progenitor. The legato and glide responses are perfect, and allow you to make the Model 72 sing and wail in a natural, intuitive way. Being able to use the synth as an effects plug-in as well as an instrument makes it even more useful; you can feed any signal through the superb model of its vintage Moog filter, not to mention mix that sound with the fat and flexible sound of the Model 72’s analogue-style oscillators, and shape it with its vintage envelopes. 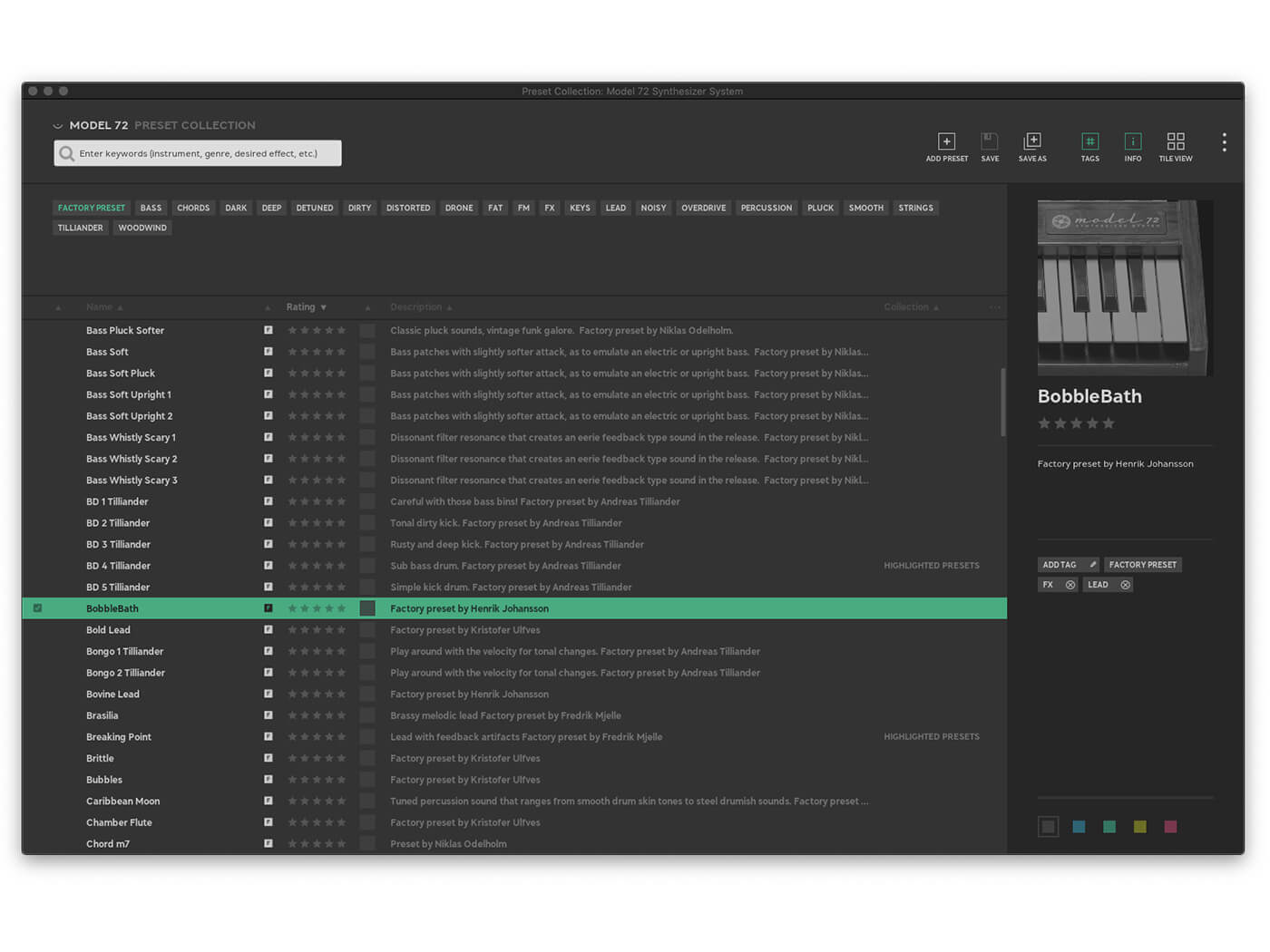 The Minimoog has enduring popularity that stems directly from the ease with which one can coax the most delicious (and sometimes the craziest) sounds from its compact wooden casing. Because of this, the Minimoog is probably the most circuit-analysed and computer-modelled synth there is, so there’s a good range of choice if you’re in the market for such a synth. Model 72 is certainly among the best of these models, and Softube’s enhancements add modern features that only improve on the classic recipe. It’s worth a look even if you’re already well-served for Minimoog emulations. Better still, Model 72’s synth modules can be used in Softube Modular and Amp Room, allowing you to combine its classic Moog-style elements with other synth and effect modules from Softube’s growing collection.

With this app for 64-bit iOS devices, Moog Music has taken the portability of their original Minimoog to the next level, adding an arpeggiator, effects, a loop recorder and, perhaps most surprisingly, up to four-note polyphony.

Developed in partnership with Bob Moog himself, Arturia’s homage to the classic Minimoog offers an accurate rendition of the original’s sound and control-panel layout. Mini V also includes an advanced modulator that can be patched to many of the synth’s parameters via a modulation matrix.