The latest Kontakt instrument from Bristol-based Slate + Ash offers granular synthesis on repeat – but will it have us going round in circles? We get acquainted with Cycles. 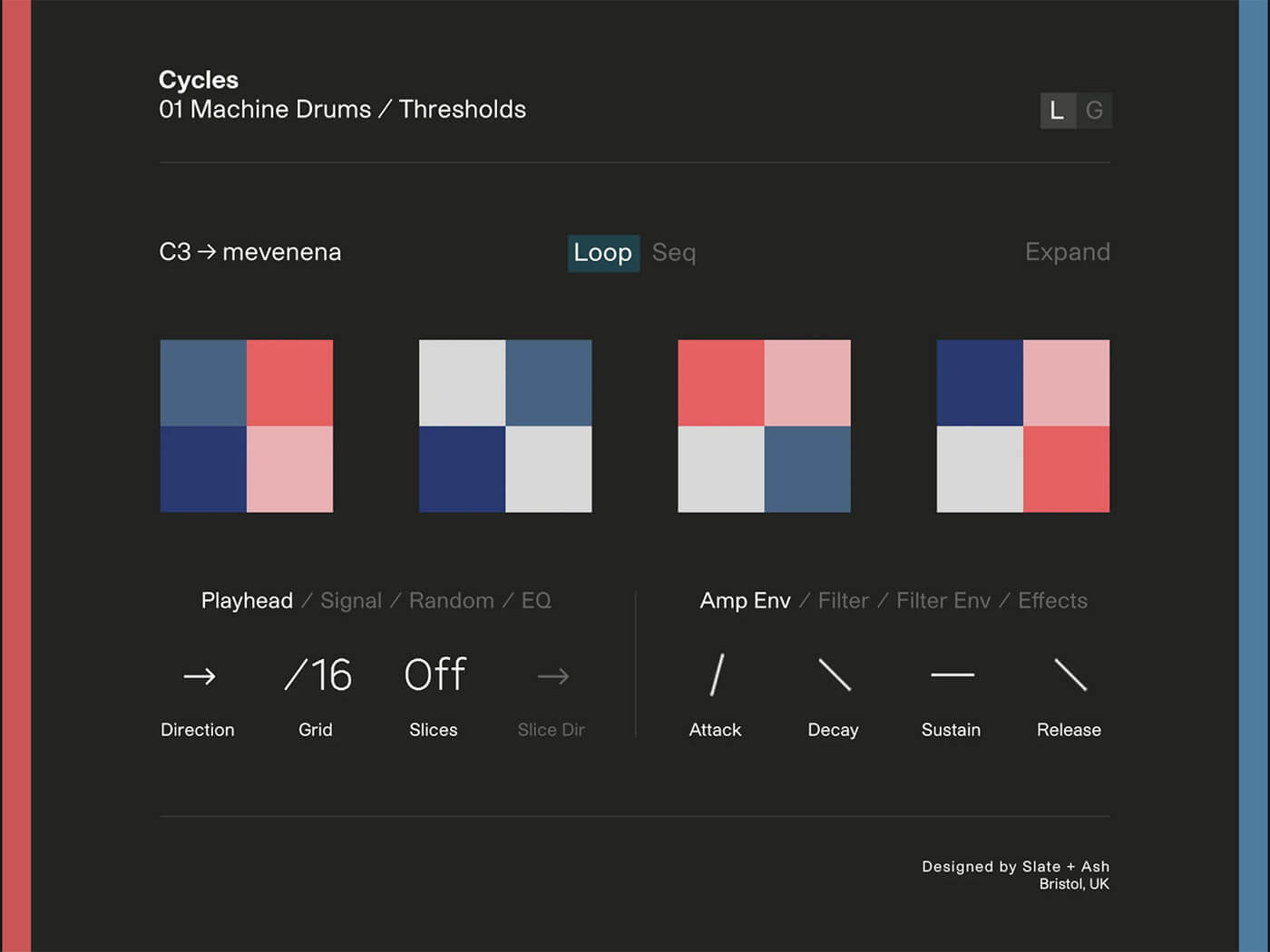 Will Slater and Simon Ashdown may not be familiar names to people in mainstream music production but the sound-design duo, who bill themselves as Slate + Ash, have a lengthy list of professional credits that extend to Hollywood feature films and beyond.

You’ve probably heard their work before – perhaps as part of Jóhann Jóhannsson’s Arrival score, Ben Salisbury and Geoff Barrow’s work for Annihilation, or on National Geographic documentary series One Strange Rock – whether you realise it or not. When a pairing of this pedigree releases a Kontakt instrument that boasts creativity, musicality and live performance at its very core, it has to be worth investigating.

Slate and Ash’s last Kontakt instrument, Auras, was released in 2018 and pushed the envelope through MPE-based control. Their latest, Cycles, shares some sonic characteristics with Auras but operates via a different methodology when it comes to sculpting absorbing sonic landscapes.

Cycles sits a granular synth engine alongside a step-based sequential and looping element. Though there’s some crossover between the two areas, this is far more than a simplistic loop-based instrument. Cycles employs a sequential element for tone-generation but also serves as a loop and trigger-style instrument, with further capacity as a granular synth with sequenced elements. 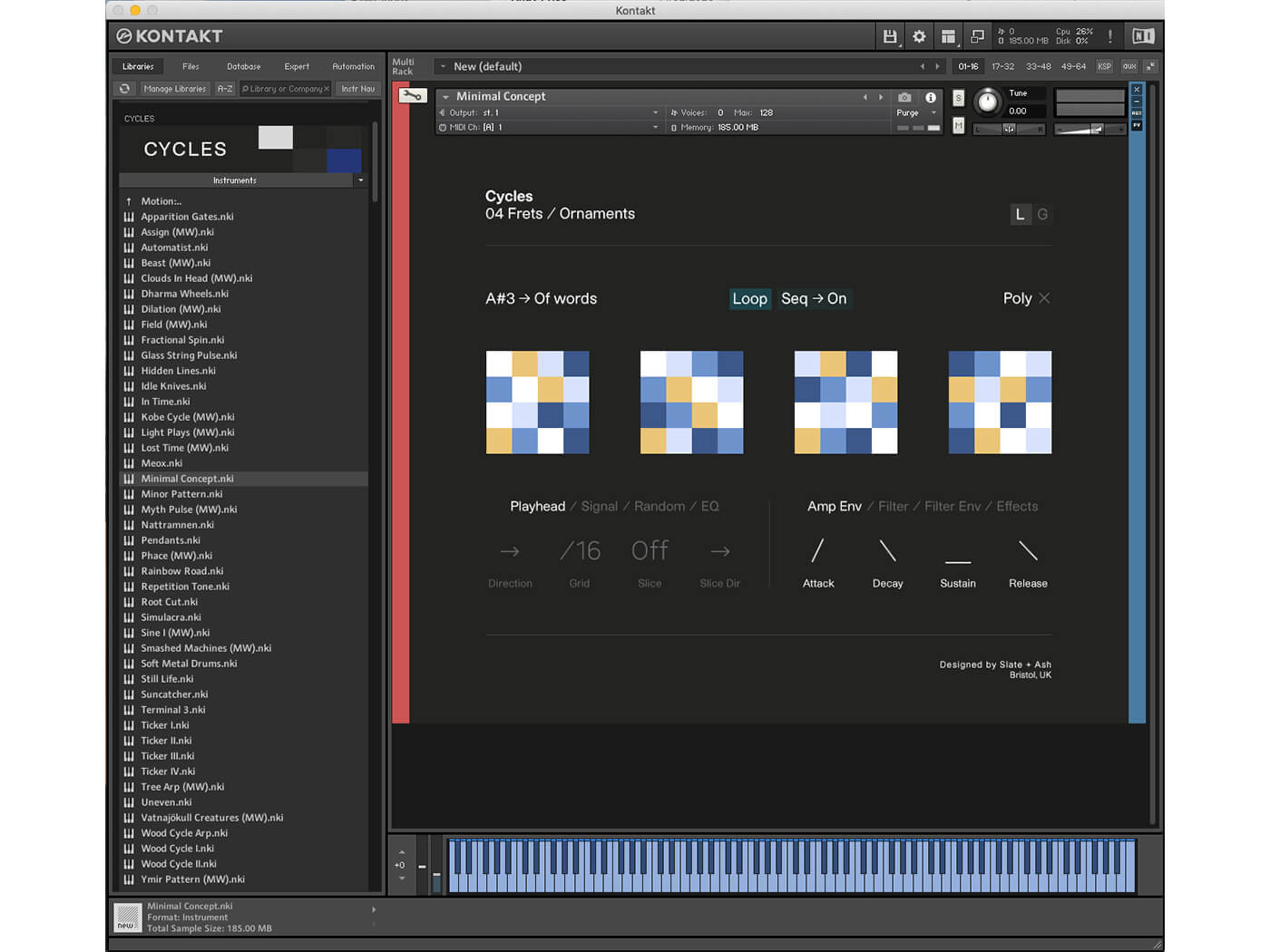 Cycles has many layers, and getting to know its inner workings will likely yield great results. It ships with a healthy dose of presets, categorised into Loop and Grains, accessed via the L and G tab in the upper right of the GUI.

The Loop page is divided into four colour-coded square grids, which can be set as 1×1, 1×2, 2×2, 4×2 and 4×4, with each smaller square representing a step. Each step can be given its own characteristic, allowing you to alter its elements, such as volume and pitch. To change these steps, simply click and drag them to your desired value. Think of this page as a kind of sequencer or arpeggiator.

There’s vast potential for live usage here – it’s possible to load up to 25 loops simultaneously, each triggered via the upper part of your keyboard. The two-octave tonal centre is located in the lower portion of the keyboard. There is an extensive amount of control here, which can be easily assigned to a hardware MIDI controller. This makes for crisp low and high-pass filters, as well as delay and reverb. The loops can be latched, meaning multiple examples can be triggered at once, which leaves your hands free to mangle the playback. 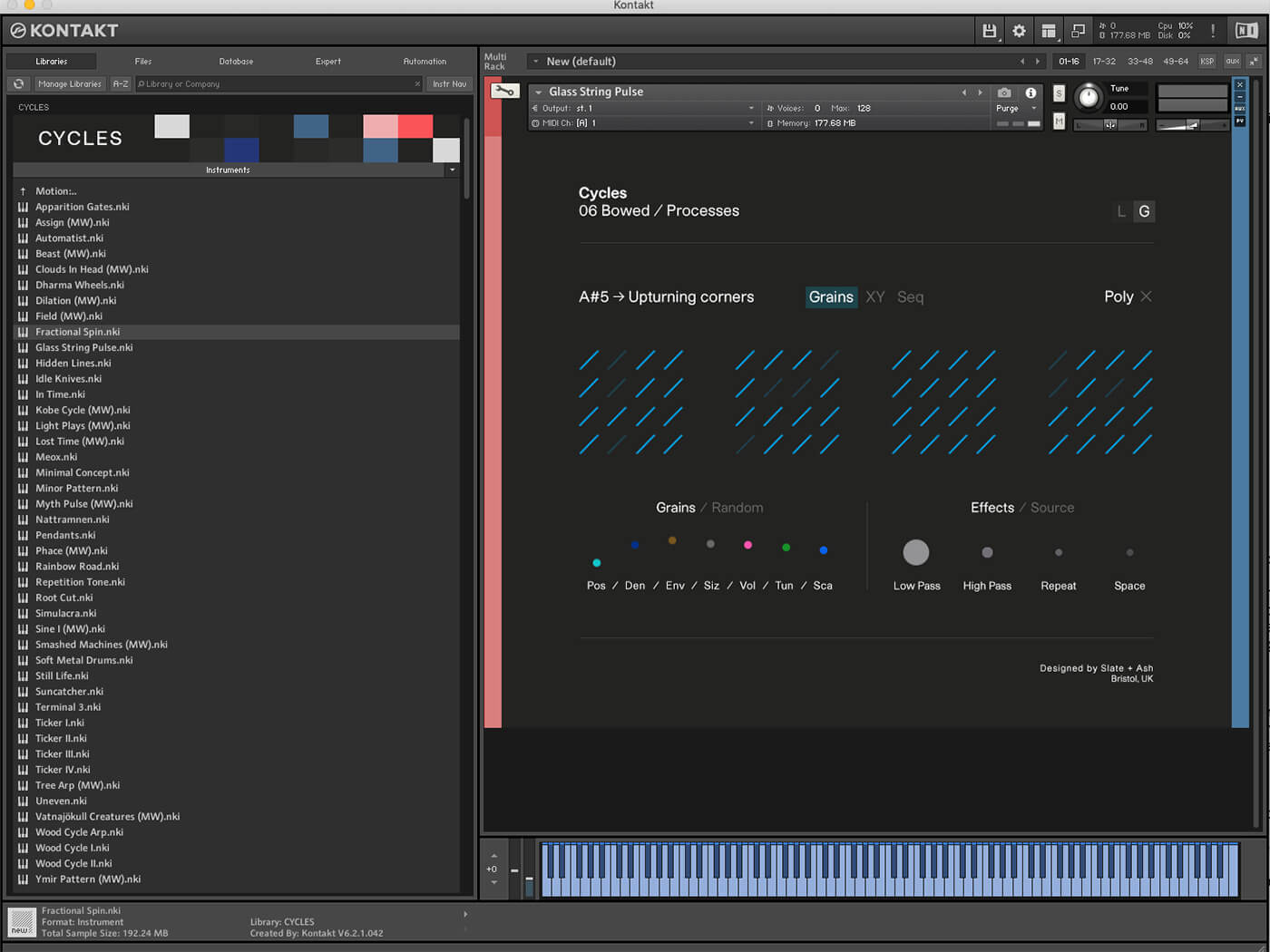 One of the most mesmerising aspects of Cycles is its granular engine, where mono-playback samples can be modified with grains and mutated beyond all recognition to be played polyphonically. There are five grain states – Basic, Ambient, Textural, Rhythmic and Gestural – pre-designed engine settings into which can be triggered any of the loops. There are also five preset categories, whose titles give clues as to their instruments’ form: Motion, Pad, Sequence, Synth and Textures. The first, Motion, for example, has a sterling cross-section of patches, many of which provide a sense of atmospheric undulation, one of the many strengths that come with Cycles’ granular-synth system.

A row of seven faders, located beneath the main visuals, control the grains’ basic elements: position, density, envelope and size, as well as volume, tuning and scale type. These parameters are ordered as such but can be randomised too, leading to some rewarding textures. Cycles’ modulation capabilities are hugely versatile too. Clicking on the granular control legends brings up a modulation screen that relates to your chosen element.

The modulation window also pulls an LFO into the equation, which boasts its own parameters for shape, speed and phase, allows for phase offset, and clock divide or multiplication, and can be synced to your DAW. With many synths, modulation routing is done via a table, but this simplified approach is considerably easier to comprehend.

Thanks in part to a recent Kontakt update, you can also drag and drop your own samples directly onto the instrument interface. Slate and Ash has designed a user patch for this purpose, which helps make light work of sample loading.

Cycles functions well as a conventional tonal source, into which you might load in and control presets in real time. Though it can do much more, if this is as far as you get with it, you’ll still be richly rewarded. However, Cycles is capable of much more. Better still, you can’t really go wrong when digging deeper into the instruments’ complexities and, in fact, the occasional mistake might even reveal a superb sound, which you can then unravel in programming terms.

The fact that we haven’t even touched on Cycles’ XY pads and the way its sequencing affects the granular engine underlines the rabbit-hole nature of the instrument. 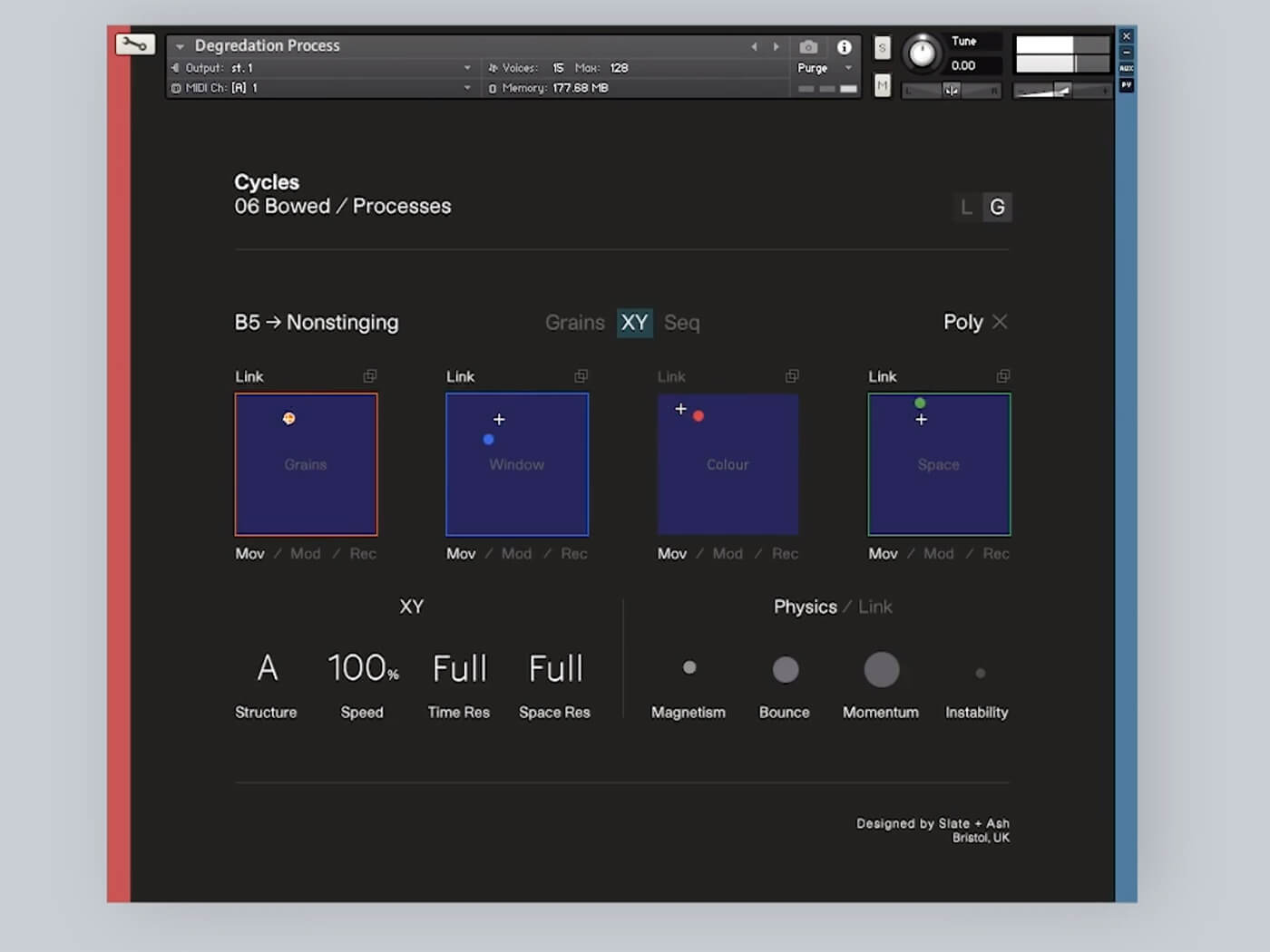 Cycles can be exploited in a variety of ways. As a studio-bound instrument, it has plenty of out-the-box content to get you salivating over its sonic potential. The modulation and real-time control elements mean you can use it extensively without feeling like you’re repeating yourself or being exposed to the same old sounds. The ability to load in user samples means you can take it in any direction you like too.

Be warned, however, that the onboard content is stunning, so you’ll want to ensure that your user-based content is similarly good. There’s a solid argument for using Cycles purely as a live player too, given its clever Loops section and the real-time control on offer. Take this with you to the studio and you may well find yourself straying into unexpected sonic terrain – it’s that inspiring. 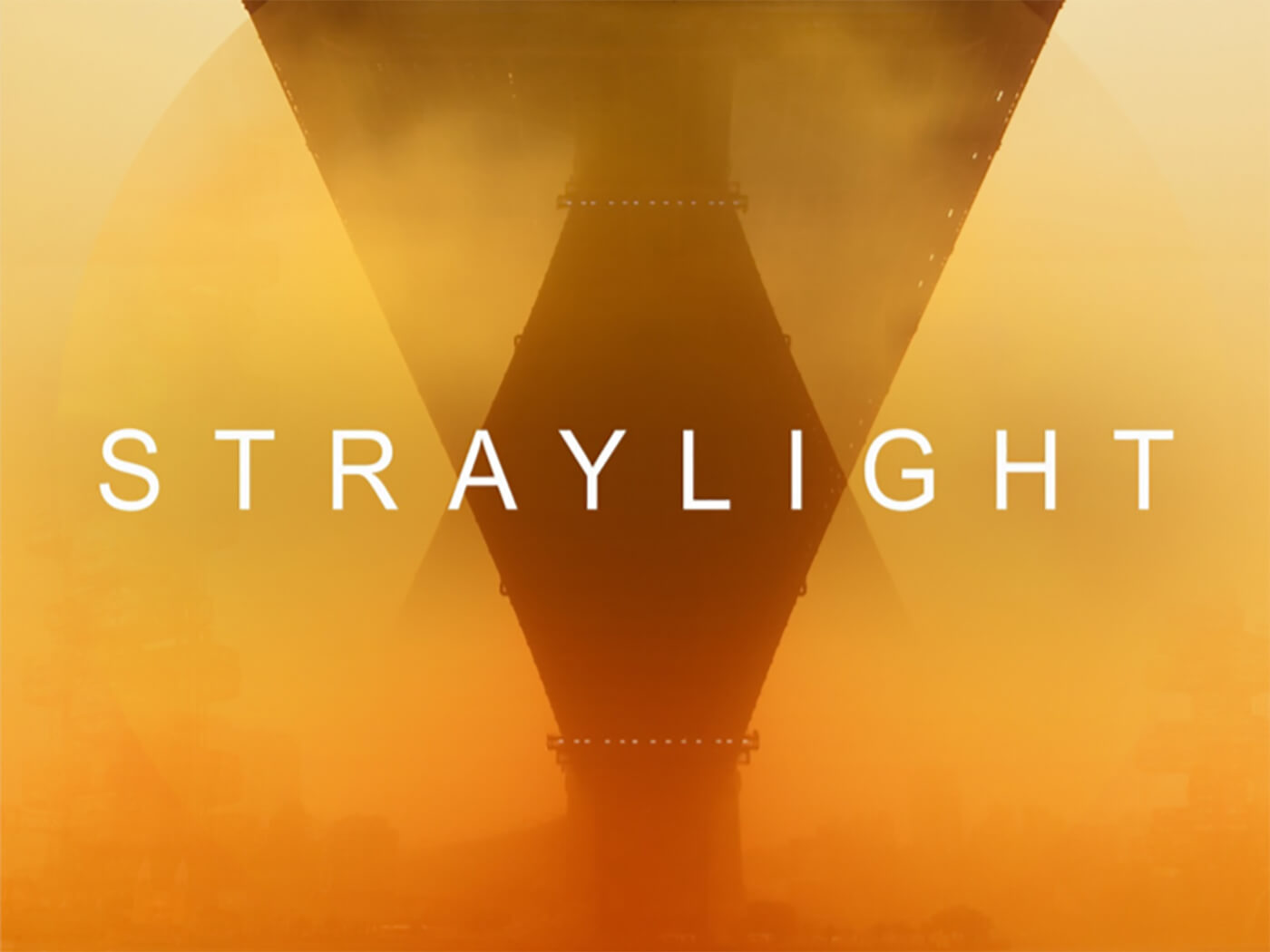 Native Instruments’ granular-style Kontakt instrument sports a lovely and easy-to-use GUI and offers a cinematic sound-design experience that makes it ideal for crafting soundscapes for film. Straylight may have a little less functionality but its sounds are terribly impressive and atmospheric. 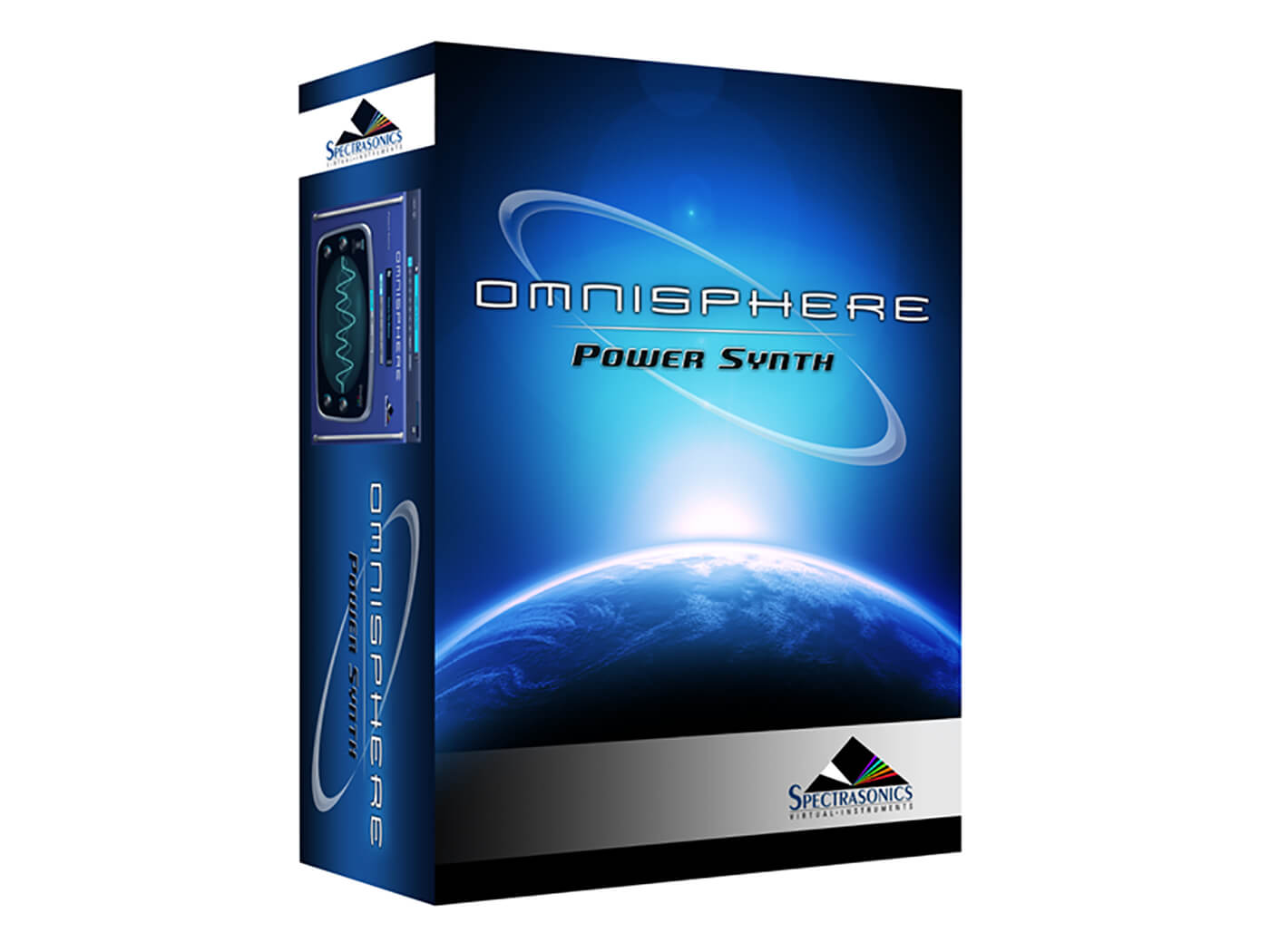 The ever-popular Omnisphere has some excellent granular credentials and a serious amount of sample content. It boasts a comprehensive sequencer section and a host of other synthesis capabilities, and is a go-to virtual synth for many.