Cooked up by the boffins at SampleScience, Vaporwaves 2 is a time-travelling plug-in that winds back the clock and lets users party – or at least compose – like it’s 1989. 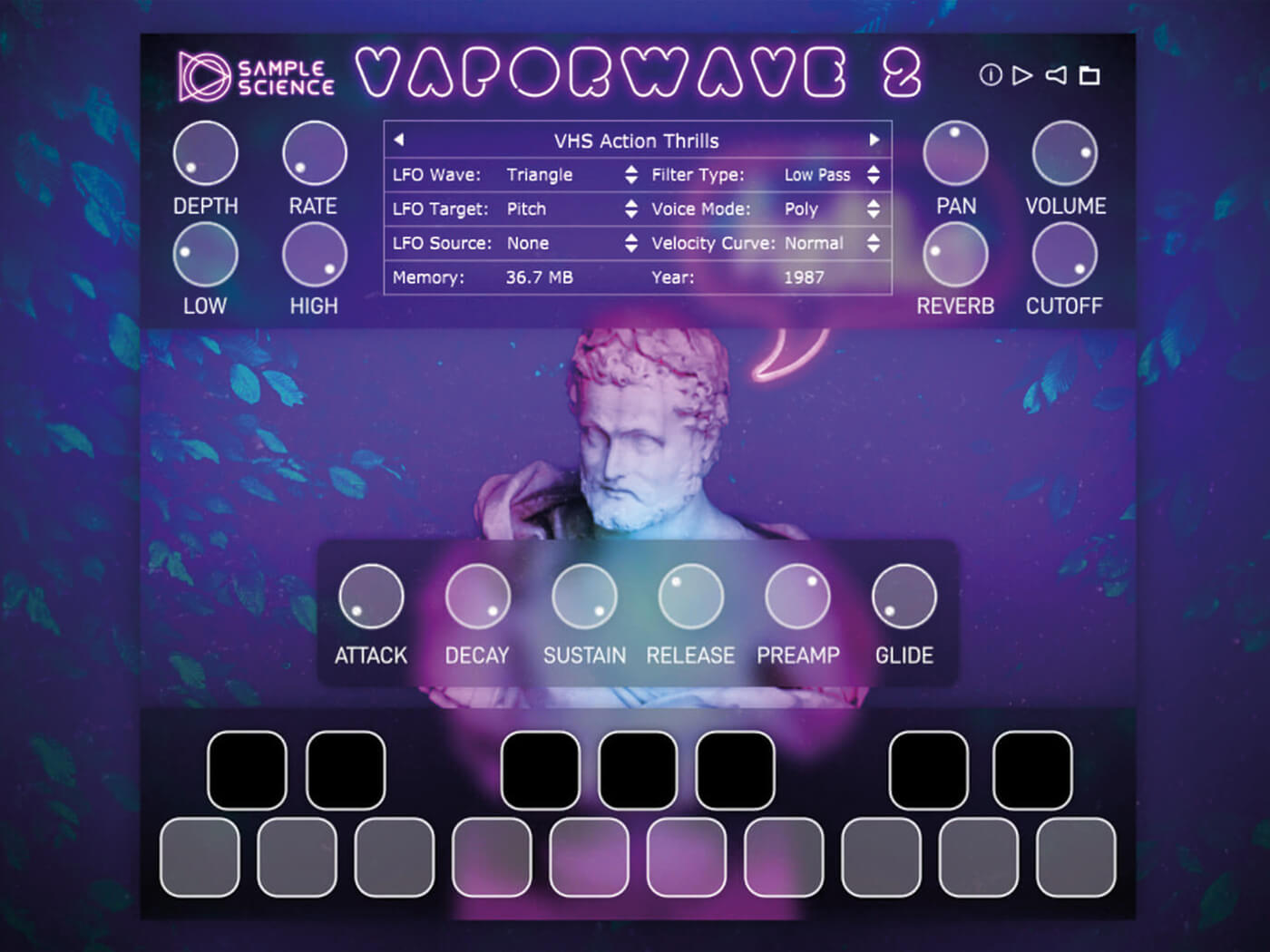 This new retro-flavoured plug-in from Canada’s SampleScience is based on samples taken from an “obscure” 1980s FM synthesizer and recorded on used VHS tapes. Everything that’s old gets another go at being fresh and cool again, as they say – and we’re okay with that idea.

Vaporwaves 2 is what used to be dubbed a ROMpler, which means it contains samples but can’t record new ones. The plug-in features a handful of lo-fi sample-based instruments, including 1980s TV Drums, the free Toy Keyboard, and Vaporwaves 2’s predecessor, the first instalment in the series. It’s available as a VST, VST3 and AU plugin for Windows and macOS, although Catalina users will need to take the extra step of installing the free Maize Sample Player. Hopefully this small inconvenience can be rectified in the near future.

SampleScience is slightly cagey about naming the “obscure” FM synth of desire on which its plug-in is based – but we’re okay with that too. Reviewing Vaporwaves 2 reminds this writer that he recently sold an old heavy duty VHS deck to an archiving company – and now he wants it back. Let’s be honest, though, recording mixes and separate tracks onto tape before bouncing them back to the computer is an awful lot of hassle. If somebody else is willing to do the legwork for us, we’re more than happy to part with our old decks.

We test Vaporwaves 2 on a 2019 iMac 27” with Ableton Live 10, and Logic Pro X 10.5, and don’t encounter any technical issues. We begin by opening it in Live and sending it notes from clips, a keyboard, and Push. The plug-in interface includes an 18-note keyboard that can be used to preview its 46 presets, which are selected by clicking on the name of the currently loaded preset and choosing from the pop-up list or by using the left/right arrows to scroll through them.

Below the preset menu, the LFO shape, target and source can be chosen, alongside filter type (low, high), voice mode (poly, mono, legato), and velocity curve (normal, weak, strong). There’s also a helpful display to inform users just how much memory each preset uses, as well as the year the preset is associated with. There are knob-style controls for LFO depth and rate, pan, volume, low and high filters, reverb level and filter cutoff. Lined up below these are knobs for ADSR, preamp and glide. In conjunction with our abiding memories of the neon-laced 1980s, Vaporwaves 2 features an in-your-face colour scheme and layout that presents all its information up front; there are no hidden menus or other complexities here.

The plug-in’s presets are likely to be polarising. There are some we can’t stand and others we take to immediately. Generally speaking, they’re not quite as degraded as we were led to believe by SampleScience’s VHS bluster. One of our issues, though, is that to our ears – and to the Spectrum device display in Live – many of the presets seem extremely heavy in the midrange.

Perhaps that’s a function of the “obscure” source synth’s character or maybe it’s the VHS-conversion process, but we recommend rolling off all of these at around 300Hz, especially if you’re aiming to use more than one in the same mix. Of course, you might have completely different preferences and think these sound splendid. Either way, after having got our EQ in place – authentic or not – we enjoy using these sounds, and we’re particularly smitten with Horror Bells. 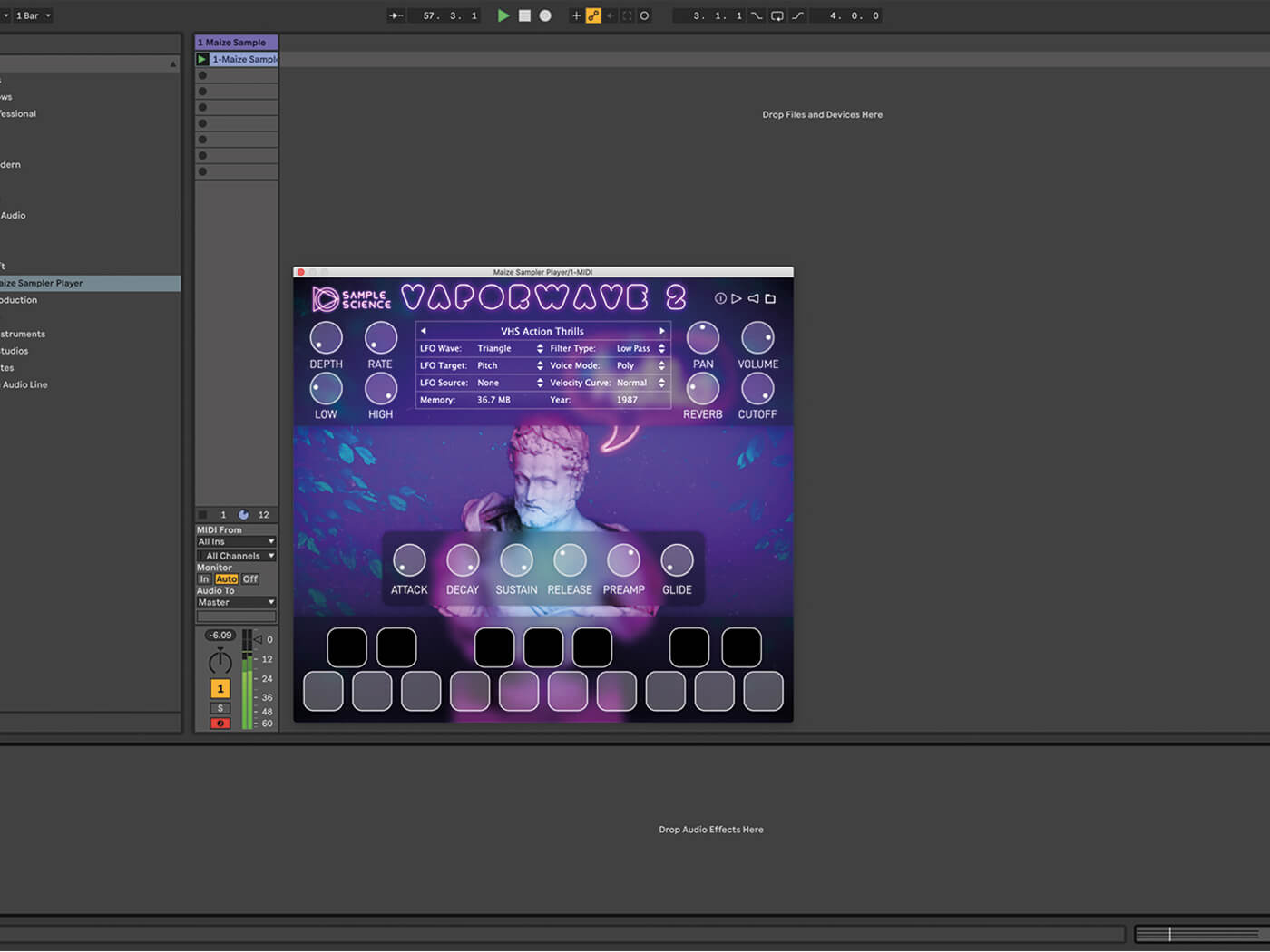 Bells side, Vaporwaves 2 features all the toys you’d expect from a plug-in like this. There’s bass, brass, pads, piano and strings but you won’t find much in the way of synth leads here. This is a focused selection whose sounds are quite distinct from typical lo-fi and chiptune sounds. The filters, LFO, and reverb, are adequate but we prefer to ignore these in favour of Live’s own devices. Relying on your DAW is a departure from SampleScience’s self-contained retro-styled love-in, sure, but it means you’ll get more control than the plug-in is able to provide. The Vaporwaves LFO, for example, can only be applied to pitch, expression, and pan.

Another limitation is that the plug-in has no MIDI-learn, and only ADSR, filter frequency and glide time can be MIDI-mapped through Live’s customisable MIDI-configure mode. It’s the same situation with Ableton Push and Akai Force. We recognise that Vaporwaves 2 is a fun plug-in but more hardware control would have been nice, especially when it comes to performance use. Perhaps, though, these are limitations of the Maize Sampler, which we had to use for this review, as a result of the aforementioned Catalina compatibility issue.

Undercooked controls or not, there’s an enormous amount of joy to be reaped from Vaporwaves 2. We create an instrument rack with two chains and two instances of the plug-in. In one chain, we add Chord and Arpeggiator (set to 1/8). In the other, we add an Arpeggiator (set to 1/4) and set pitch to -24. With this setup, we can play a single note and be greeted with a pure and uncut grungy 1980s bass and melody, just as we would were we using a Linndrum or Simmons kit.

Having used Vaporwaves 2 in Live and followed SampleScience down the instrument-rack rabbit hole, we switch to Apple’s shiny new Logic Pro X update, 10.5. The first thing we try here is MIDI mapping but we can’t get it to work in Logic either – the available parameters show up as smart controls but once again there’s no way to expand or customise that selection; maybe the other versions that don’t require Maize Sampler are better set up in that regard.

More positively, Vaporwaves 2 works wonderfully with Logic’s new step sequencer, which includes some pattern presets that let you get off to a spring-loaded start. Given that Logic’s 10.5 updates now features a grid-style view in the vein of Live Loops, we’re able to create patterns that can be played in the grid extremely efficiently.

Vaporwave isn’t just a dynamic name for this enjoyable plug-in, it’s a distinct media genre that encompasses internet culture, visual art and electronic music, the latter focused on revisiting sounds and styles of the 1980s and 1990s, sounds that range from smooth jazz and film scores to lounge music. Vaporwaves 2, then, is well tailored to vaporwave musicians and the like. But even those less familiar with this all-encompassing mimetic term can get a lot of mileage from SampleScience’s latest plug-in.

Regardless of its genre associations, its sounds are universally cool and applicable to many productions. This isn’t a short-lived plug-in du jour; it’ll pay for itself if you use it on just a handful of tracks. 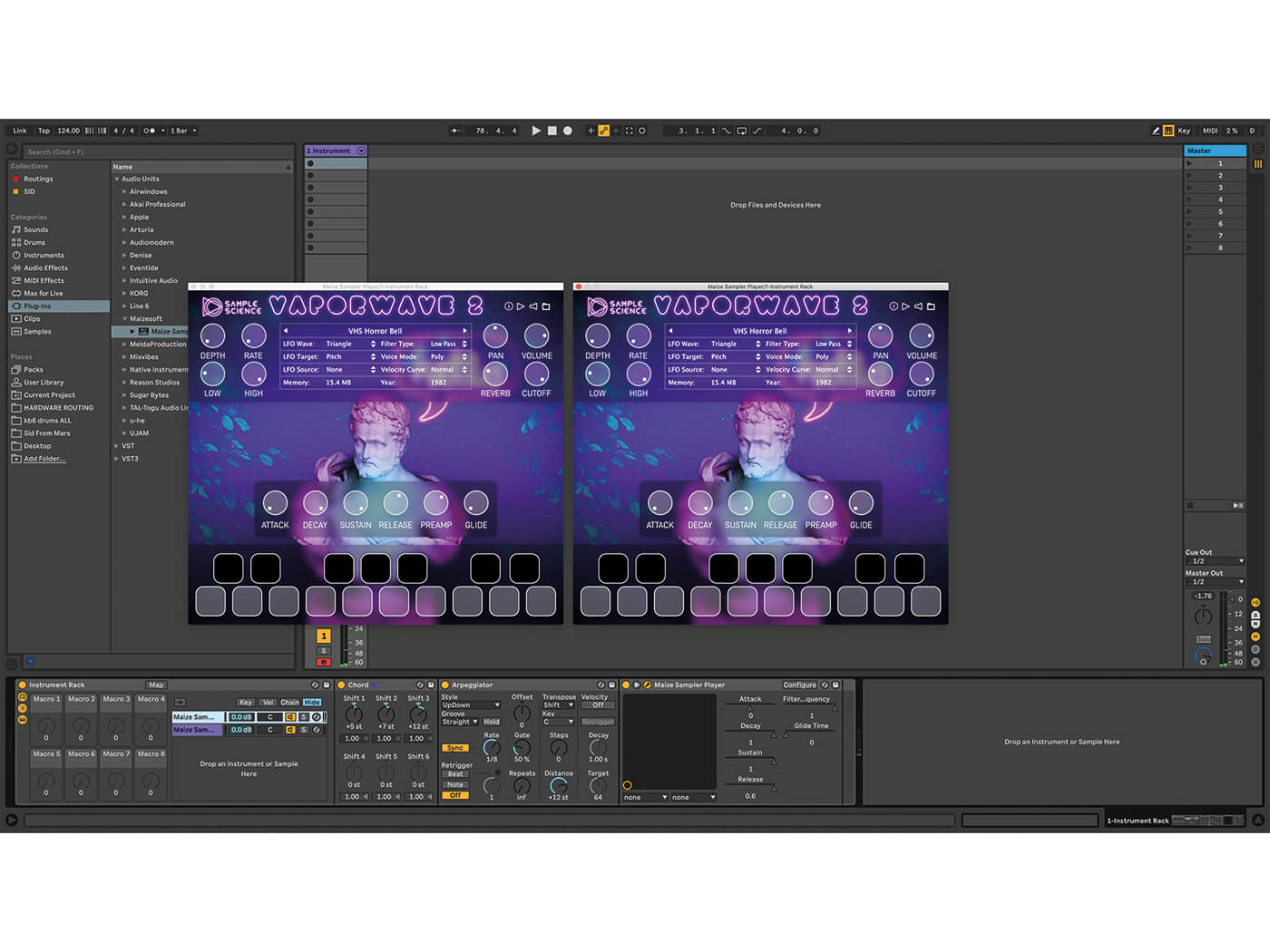 There’s a lot to be said for carefully crafting your own sounds from scratch. But there’s just as much to be said for the speed and convenience of ready-made sample packs. Most of us are comfortable in that middle ground, exploring the creativity and uniqueness of sound design, while appreciating the best of what the plug-in and preset merchants have to offer.

Short of scouring eBay for old, unusual and expensive devices and investing the money and time to learn how to conjure samples from them, third-party plug-ins are the best option. Vaporwaves 2 was created using an old VHS video player, and you may not have one of those knocking around. Thanks to SampleScience, you don’t have to. 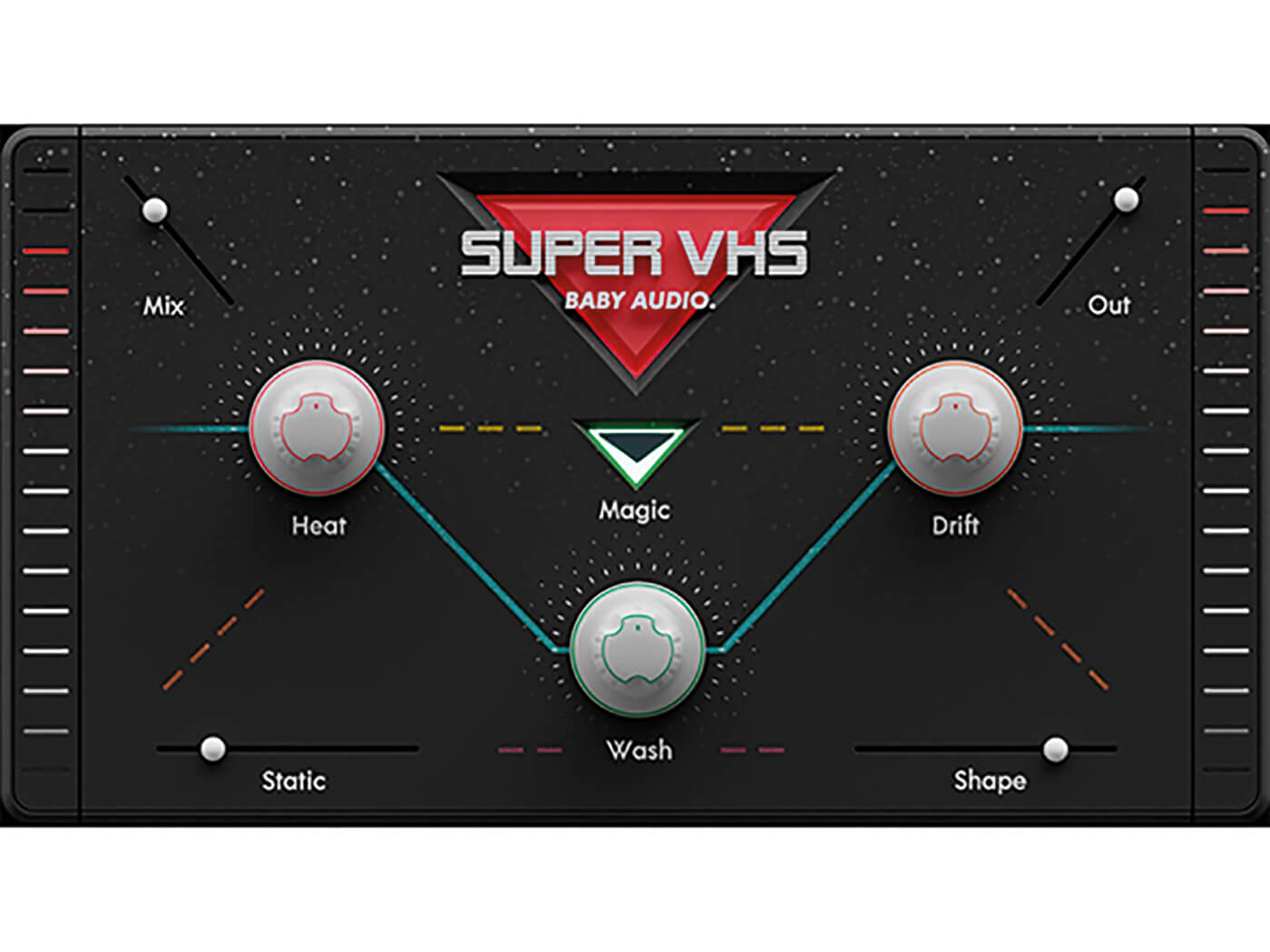 A VHS audio effect that you can use with any instrument or source, Super VHS features controls for static noise (generated by a pink-noise oscillator mixed with a saw wave), tape saturation, sample-rate reduction, and more, and has a hidden limiter working under the hood.

This classic noise-making plug-in is aimed more at vinyl artefacts but it’s customisable and could comfortably be tailored more towards VHS-style sounds. Its adjustable parameters can alter noise, wear, scratches, dust and so on.