An accidental software groovebox hit from the 90s makes its return to an iOS device near you with 2020s features spicing up the original recipe. 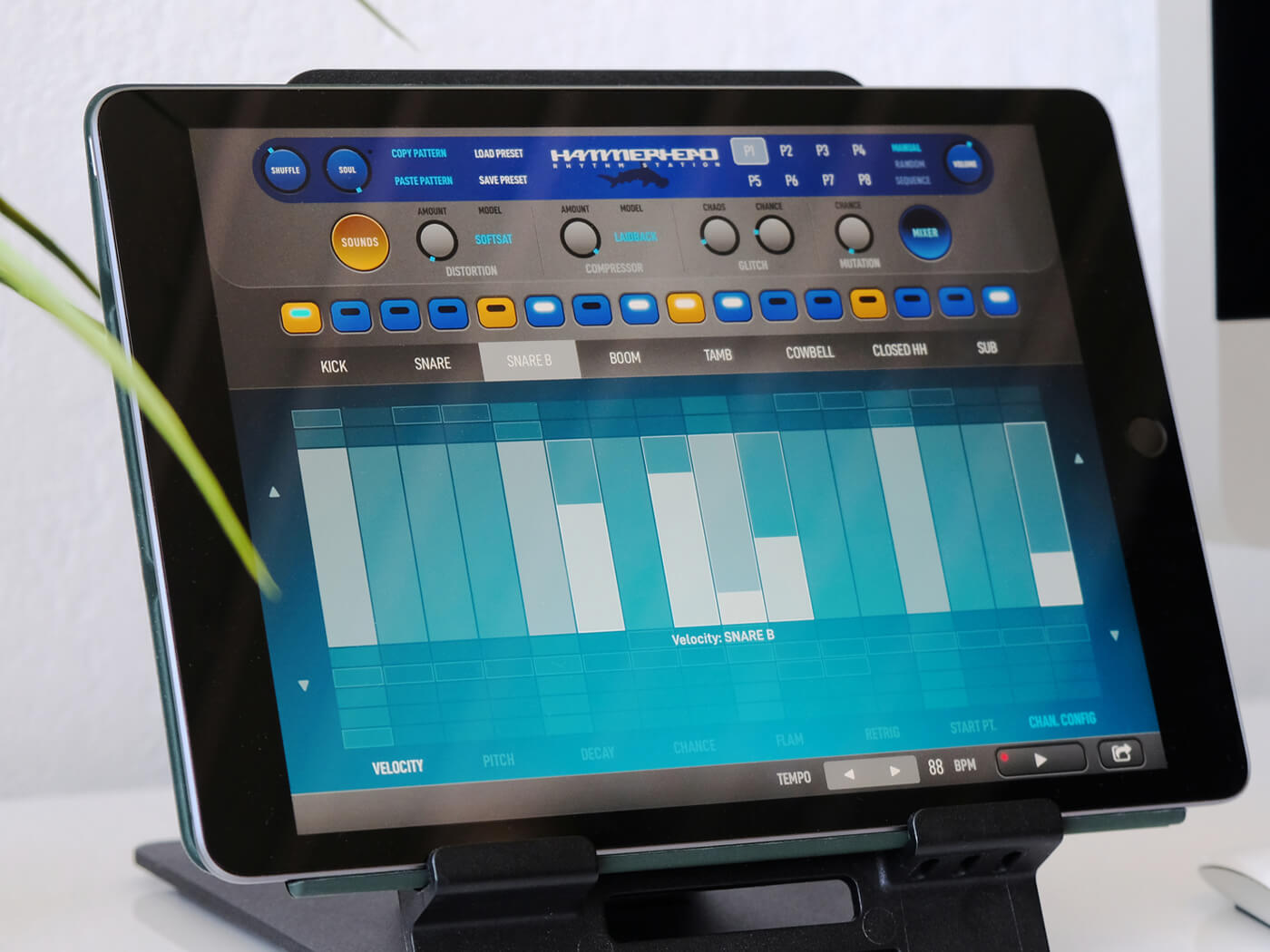 The 90s groovebox was a major step in dance music production, and Hammerhead effortlessly brings this to the iOS platform in a thoughtfully modern way without losing its classic roots.

A mere 25 years after unleashing the original Hammerhead Rhythm Station on the fledgling internet, Bram Bos has released an enhanced iOS incarnation of this groovebox sensation via his Ruismaker plug-in brand.

While it doesn’t yet exist on desktop, Hammerhead can run standalone or within an iOS DAW as an AUv3 plugin, with this latter application adding MIDI I/O.

Like the original, the layout emulates the classic groovebox format with a row of sixteen step buttons taking the centre spot. These buttons program the eight channels, which you can fine-tune via seven parameter lanes: Velocity, Pitch, Decay, Flam, Chance, Start Pt. and Retrig. The last three of these exponentially increase the creative potential and fun that Hammerhead offers. Chance reduces the probability of a step being triggered, Retrig adds quick repeats (up to 8) of a step, and Start Pt. shifts the sample playback start point. These parameters can produce a glitchy, semi-randomised feel to beats and loops. Adding chance (probability) controls genuinely helps your patterns from becoming too static, especially with fills.

For further randomisation, there are global controls. Glitch (Chaos and Chance) introduces randomised retriggers while Mutation triggers random steps. For more subtle rhythmic shifts, there is the Shuffle control for adding swing, and Soul, which gently nudges hits off the grid for a more human feel.

You can select each channel’s root sound from the original compact library of hits and loops, from Amen and Apache breaks to 808/909 one-shots. You can also import WAVs with bar length definition for basic loop slicing.

A third option is Drumsynth, a 10-knob affair that blends three synthesis blocks: Oscillator, Noise and Resonator. The Drumsynth is a capable engine for percussive hits and tonal elements, enabling Hammerhead to function as a step sequenced synth.

Between this, the sample library and the step parameters, there is a generous range of quality sounds to satisfy anything from an idle beat fiddle to a mix, or performance-ready rhythm production. The UI is well-conceived and promotes quick beat creation but also invites you to tweak and finesse.

You can balance channels via the mixer page’s X/Y volume/pan pads. This is a neat interface element that surpasses the traditional fader and pan pot, especially on iPad. These pads are joined by mute buttons and bypasses for the global Distort and Compress effects. Both effects keep to the less-is-more philosophy with eight models and a single Amount knob each. Sonically they all do their job and match their descriptors (grit, fracture, snappy, sloppy, etc.) enough to not get in the way of the essential step tweaking that gets those dancing feet going.

Eight patterns are available per preset (i.e. kit), and these can be played back randomly or in a serial sequence, effectively turning Hammerhead into a 128 step sequencer. An interesting aspect of Hammerhead’s pattern editing is that you can also set the number of steps and tempo divisions below 16, either globally or per channel. This opens up a world of funky polyrhythmic beats, such as having 10-step percussion running over 16-step 4/4 kick/snare/hats. Not only is this a fun addition, creative function, but it’s also remarkably quick to use.

Hammerhead has a delicious old school/new school feel and sound wrapped in a complementary UI that keeps things fresh and immediate without leaving you short on options. For iOS users, this is an easy buy, whether for production, performance or just for casual beatmaking.