With the latest product from sound designer and synth guru Rob Papen, we’re left wondering whether four is truly the magic number. 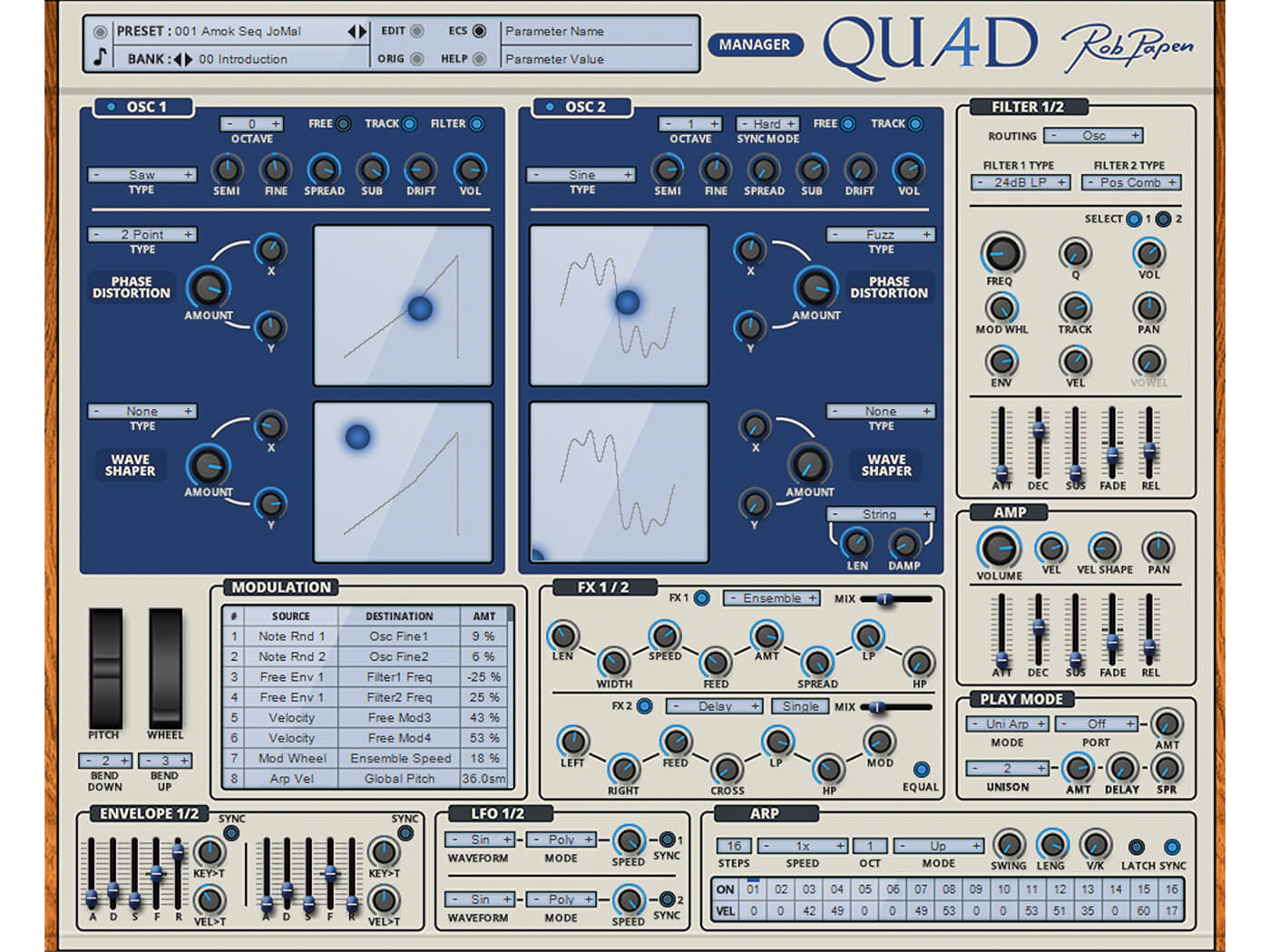 We’ve all bought into a brand at some point in our lives, pledging loyalty to our favourite car makers, electronics manufacturers or games consoles. The same occurs in the world of music technology; many brands keeps customers coming back again and again thanks to their consistent quality and aesthetics.

Dutch synth designer Rob Papen is one of them, a brand unto himself. With his assured soft-synths and virtual effects, buyers know they’re going to get plenty for their money, including sonic attributes that usually extend from ethereal to ground-shaking. Papen’s products are consistent from one to the next but each comes with its own unique twist. What’s Quad’s? We’re about to find out. 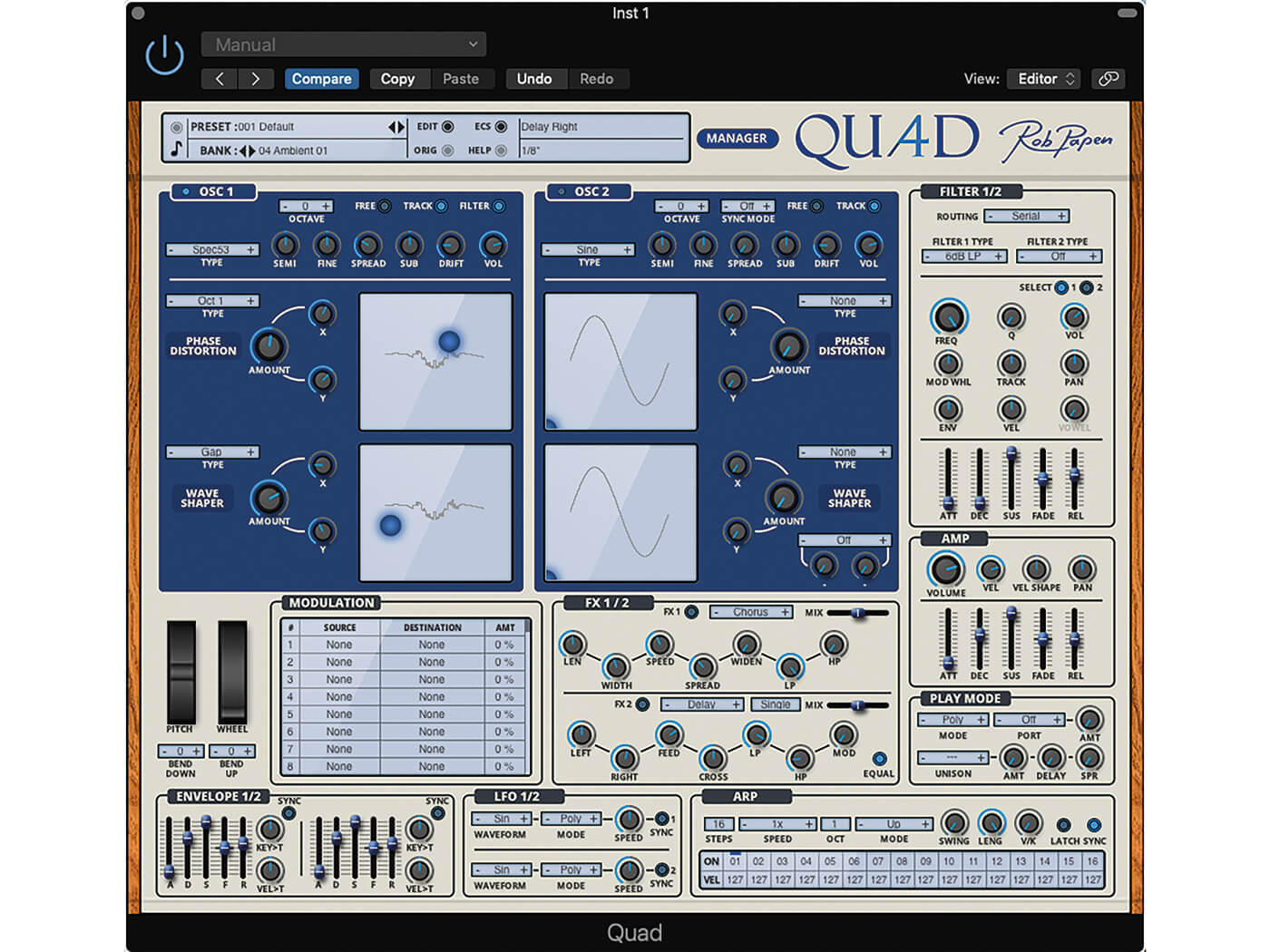 The latest addition to the Papen line-up, Quad is a virtual instrument that previously existed in the form of a rack-extension synth styled specifically for Reason. In fact, it was the first such synth to be developed from the ground up and, having garnered a strong reputation, the calls to rework it for a more universal market have finally been answered.

Now available in all the usual plug-in formats, Quad’s calling card remains its tonal sources, which include extensive options for wave-folding and phase modulation.

Its GUI is crisp and clear. There are no leaden, dark backgrounds here. Its colour scheme is actually reminiscent of that of a classic Oberheim.

Its more than 750 preset patches all sport that classic Papen sound: clean and sharp but with a real depth and weight to its sonic colourations. If you’ve used to Papen products before, you’ll feel right at home with Quad. Its initial patches are available in instrument-based categorised form from the Preset Manager. You can thus audition these quickly, which will be a huge boon to your workflow, and get to grips with what Quad has to offer within your first few sessions with it. The patches can also be categorised via musical style but don’t let this direct your movements. We prefer to roam free than to have our patch placement dictated to us.

But Quad isn’t all about presets. The synth panel’s architecture is familiar, both as an example of classic synth design and as a Papen product. Two upfront oscillators feed the filter section, which features two assignable and routable filters. A five-stage amplitude envelope shapes the patches’ volume contour, and there are a further four envelopes, two assigned within the filter section and another two assignable for modulation.

Each oscillator is equipped with two X/Y pads, making four in total. Its waveforms include classic sawtooths and squares, alongside an enormous collection of digitised and harmonically rich alternatives. You can use these as your starting point for classic synth patches or go sound-diving with the associated X/Y pads.

The upper pad is set to induce phase distortion, while the lower pad is assigned to wave-shaping, with both X/Y areas presenting a drop-down menu for associated algorithmic settings. Operationally, both of these elements allow you to modulate the initial waveform by varying user-set degrees. This makes for a palette of colours that can vary from subtle undulating tones to full-on rip-roaring timbral effects that will cleave through any mix.

Moreover, the ability to assign modulation amounts via the virtual pot next to the X/Y pad or the mouse, underlines the strength of Quad. The instrument offers a versatile and fulfilling approach to sonic experimentation, especially when it comes to phase distortion and wave-shaping. The resulting sonic colours are incredibly diverse. 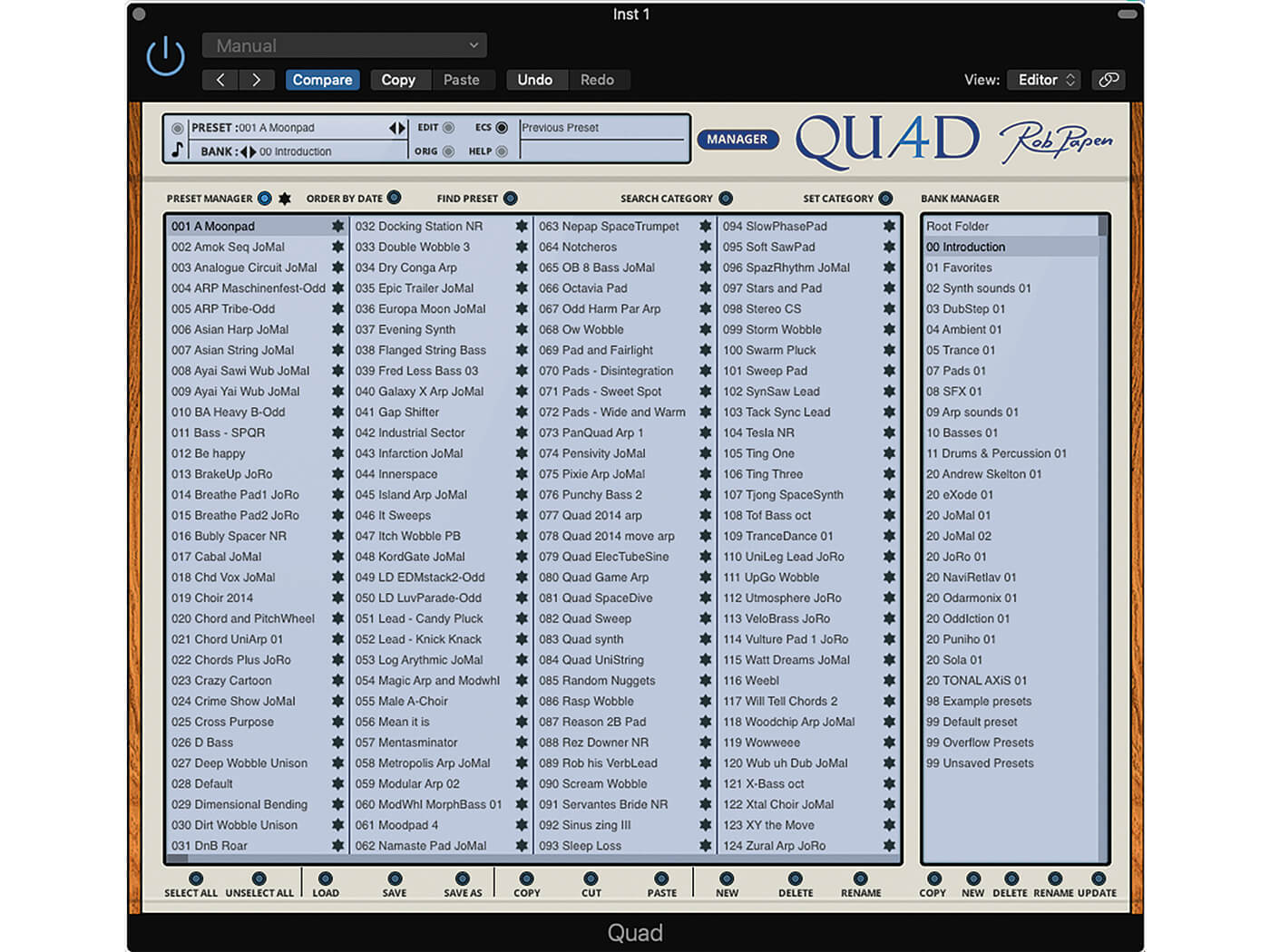 Four on the floor

The next logical progression, then, is to assign the modulation matrix to drive the modulation movement on your behalf. Modulation may be assigned from a number of sources within the synth, including the two filter-based envelopes and the two free-envelopes. Two independent LFOs offer six waveforms, from the usual sine and ramps to sample and hold.

The resulting modulated signals provide a sonic playground rich in movement and colour, and capable of everything from subtle and simple wave-folding to highly distorted options. Within the modulation matrix, it’s also possible to select from a host of MIDI-related sources for controlling modulation in real time. Some are labelled with simple MIDI CC numbers, others give a clear indication of their purpose, such as velocity, aftertouch or other CC-related essentials, such as sustain pedal or mod-wheel.

Quad lacks one asset that we’ve seen in other Papen products: the ability to automate and indicate movement via the X/Y pad, as an automated recording. We always found this an engaging feature. Understandably, however, Quad now directs you to use automation within your chosen DAW to achieve the same effect. In any case, the assured accuracy of the onboard modulation sources is such that you can achieve plenty via this method. While we have largely been centred on the X/Y Pad and oscillator functionality this far, you can modulate pretty much anything on the synth interface, via the matrix.

The filter section is another feature typical of Papen, and here it’s bedecked with 36 filter types. The two filters are assigned independently in series, parallel or tuned to each oscillator. Moreover, aside from the usual low-, high-, band- and notch-style filters, which extend from 6dB to 36dB, you’ll also find vocal, formant and comb filtering, which allows for some stunningly throaty colours and reimaginings of your initial wave choices. 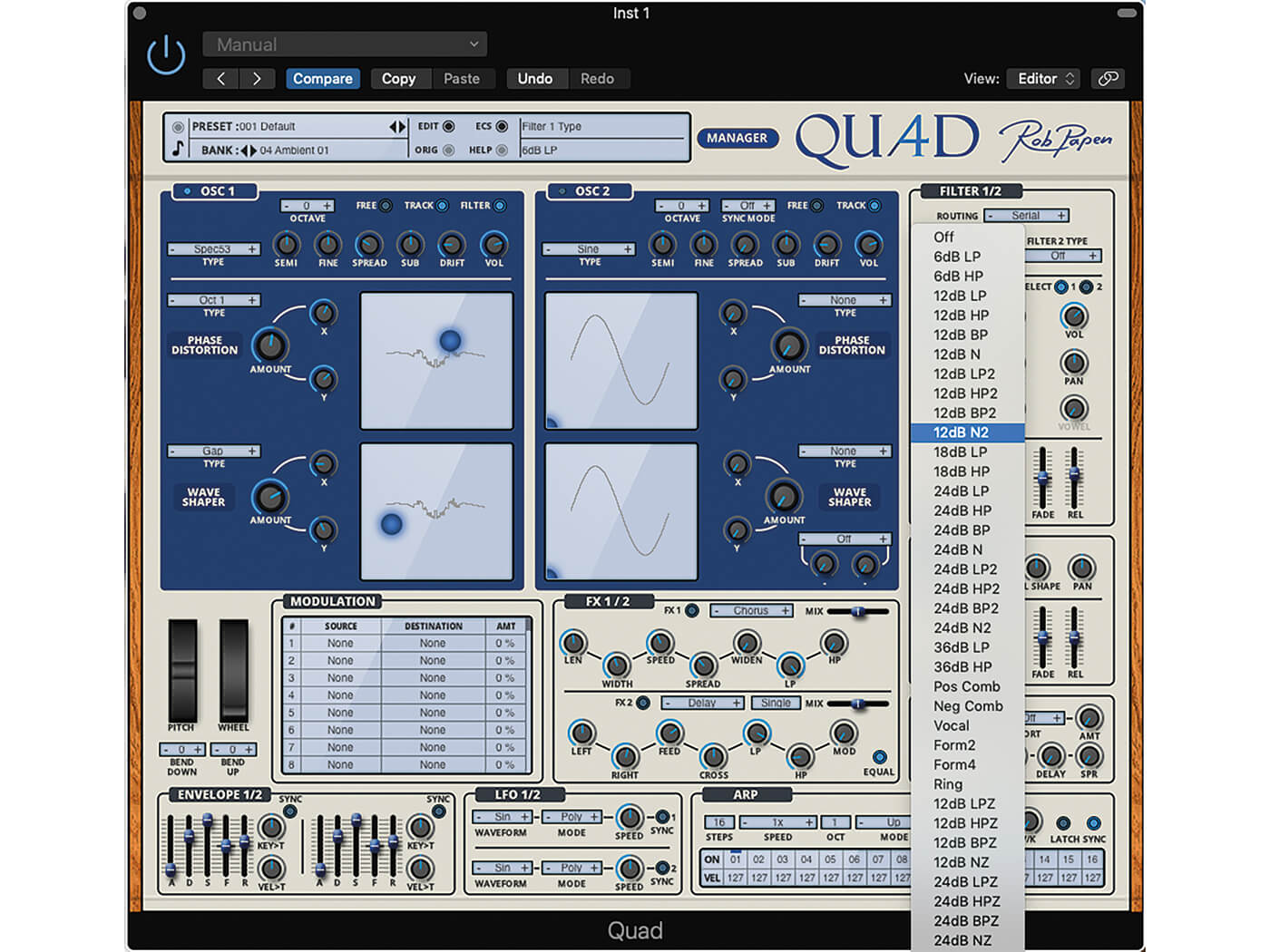 Quad offers a large degree of functionality and tonal resources packaged in an easy-to-use plug-in. The uncluttered and clear user interface is a hit, while the addition of elements such as the 16-step programmable arpeggiator and two backend effects channels make for a recognisably Papen experience.

Papen fans will flock to this – and for good reason. But, though Quad represents exceptional value for money, it feels almost too familiar at times, like Papen is perhaps treading water. If you already own Vecto, for example, you’ll find similarities between its tonal colour and that of Quad. As a single purchase for first-time Papen users, though, Quad is far from square.

Quad has much to offer prospective user. For pad-like colours, it’s especially strong, capable of sounding ethereal and menacing while adding glorious movement to your sounds. Adding effects into the equation merely thickens the potion, while the programmable elements within the oscillator section can give your tones sweet and gnarly flavours within seconds.

As with all Rob Papen products, the filter section is substantial too, with an abundance of timbral choice and a never-ending supply of interest from a few lesser-thought-of filter styles. It’s no slouch in other departments either, with depths for basses, heights for searing leads and plenty of modulation options for the weird and esoteric. When compared to other Papen products, especially in a DAW environment, the sonic similarities are perhaps too apparent. For first-timers, though, Quad represents superb value for money. This package is a joy to use. 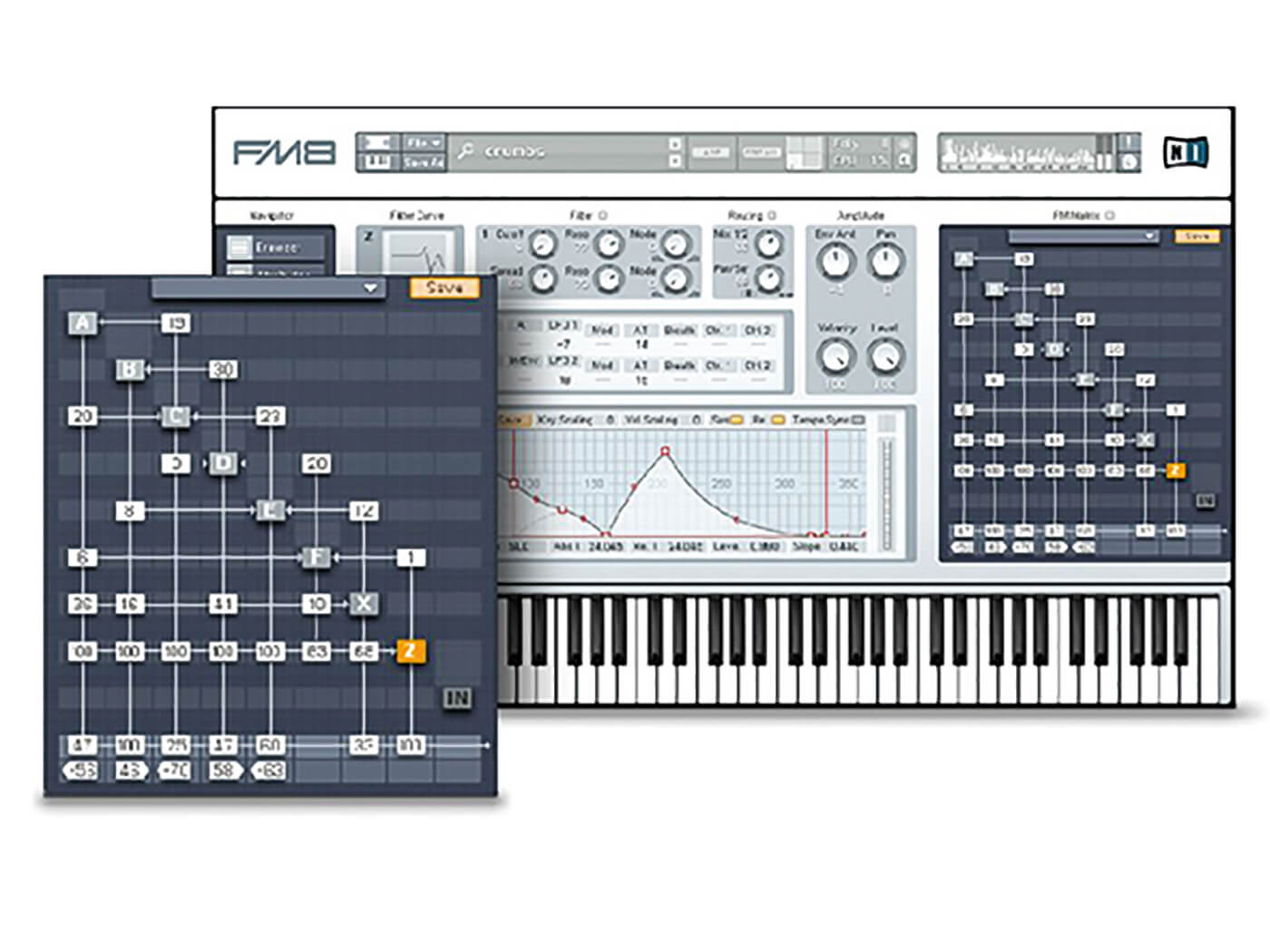 This takes the well-trodden concept of FM synthesis and repackages it to provide easy programming and a wealth of presets. It sounds like a DX-7 for the next generation, with a mix of traditional FM sounds and modern timbral options. 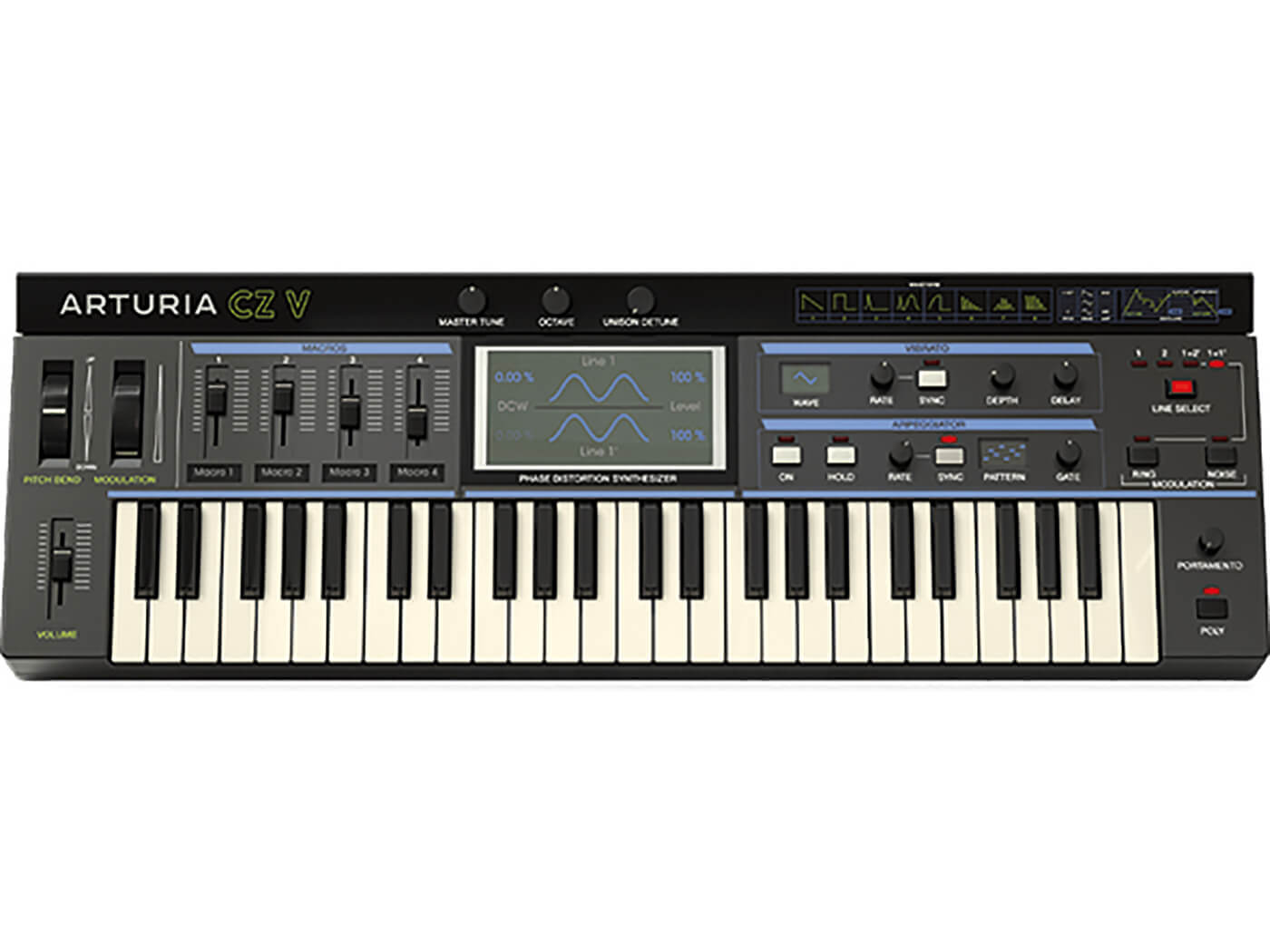 Arturia’s plug-in clone is tailored after the Casio machine that arguably kickstarted the whole phase-distortion and FM revolution. There are plenty of onboard additions that bring things firmly up to date, while also harking back to the original.