With an addictive appetite for partials, saws and plenty more, Rob Papen’s newly updated soft-synth cuts straight to the heart of your mix. 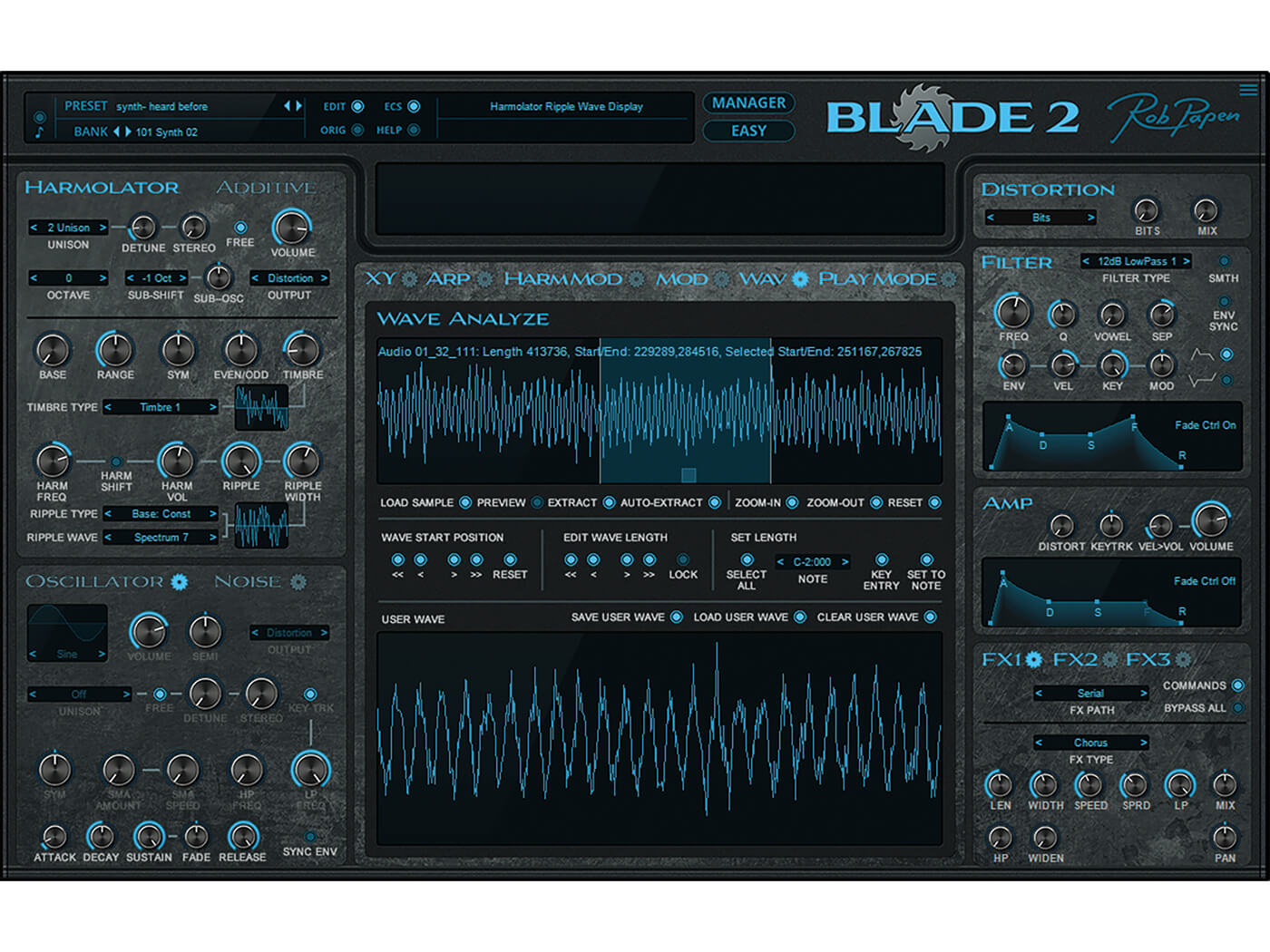 While we all like familiarity, there are some forms of synthesis that feel under-represented. This might be due to the guiding principle that many are wary of drastic change. Finding ways to exploit these lesser-exploited synth engines, in a package that will still feel familiar, is a formidable challenge, so it comes as no surprise that Rob Papen has snatched the baton with a firm grip, and started running faster than Forrest Gump with a box of chocolates. 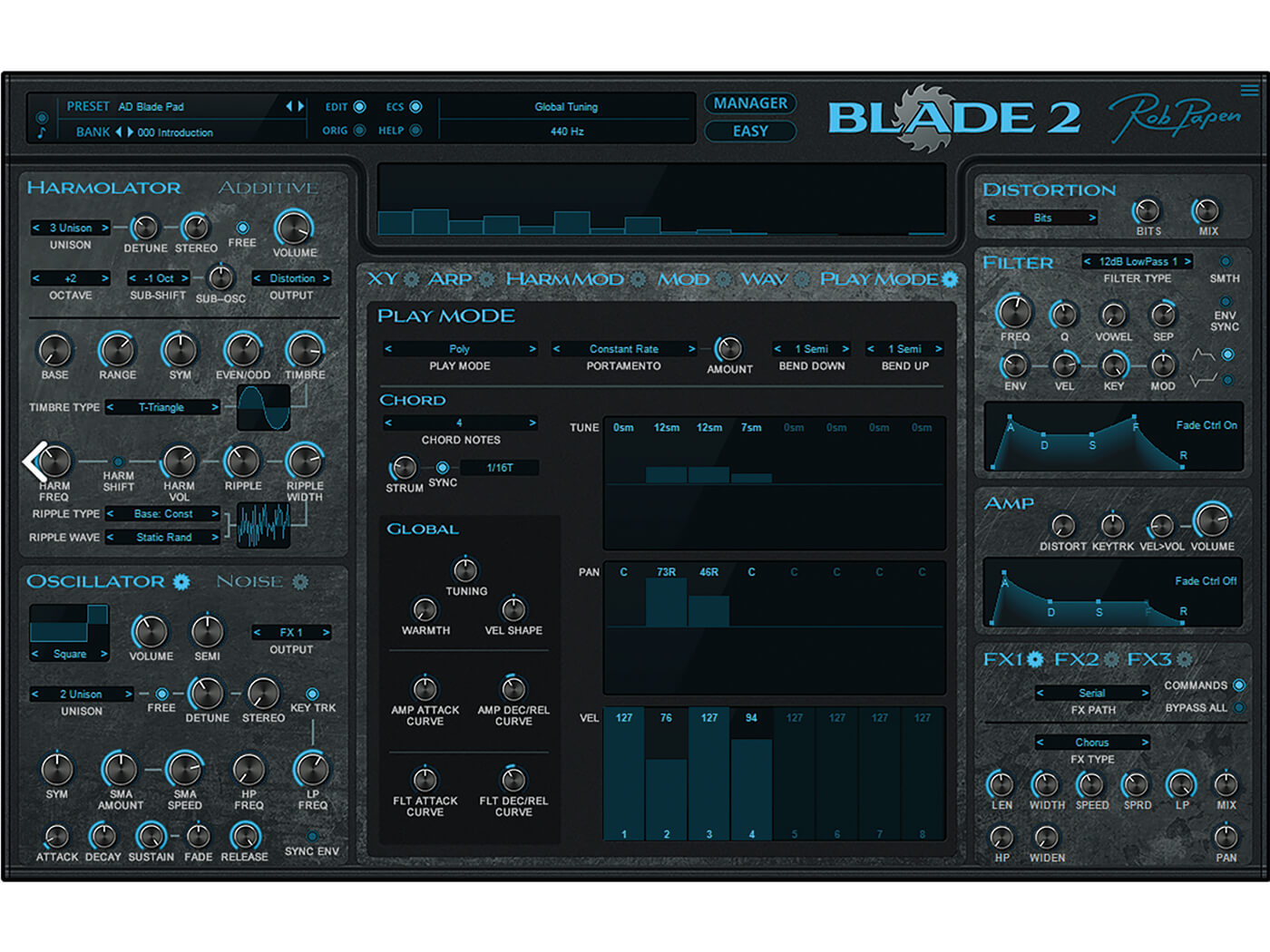 It was 2012 when the first version of Blade was introduced, and while it made a sonic impression, it’s fair to say that the technology, and Rob Papen, has moved on a considerable way since then. The initial release of Blade offered a GUI which felt a little dark and drab, although it did pack a punch sonically, albeit feeling a little brittle in some quarters. Blade 2 however looks and feels sharp; the textured backgrounds offer a visual depth which is easy on the eye.

Although a minor detail, we were never huge fans of the Samurai-esque blade adoring the top of the plug-in’s main GUI. This has now been replaced with a circular-saw blade, placed behind the turquoise Blade 2 logo. This circular cutting tool also appears within various synth sections, requiring a click to produce the related settings. Within the same arena, elements such as oscillators or effects require a toggling-click on the sections legend, to switch them on and off, while the circular saw might require a further click to bring the parameters to the foreground. It can feel counter-intuitive at first, becoming easier the more you play. 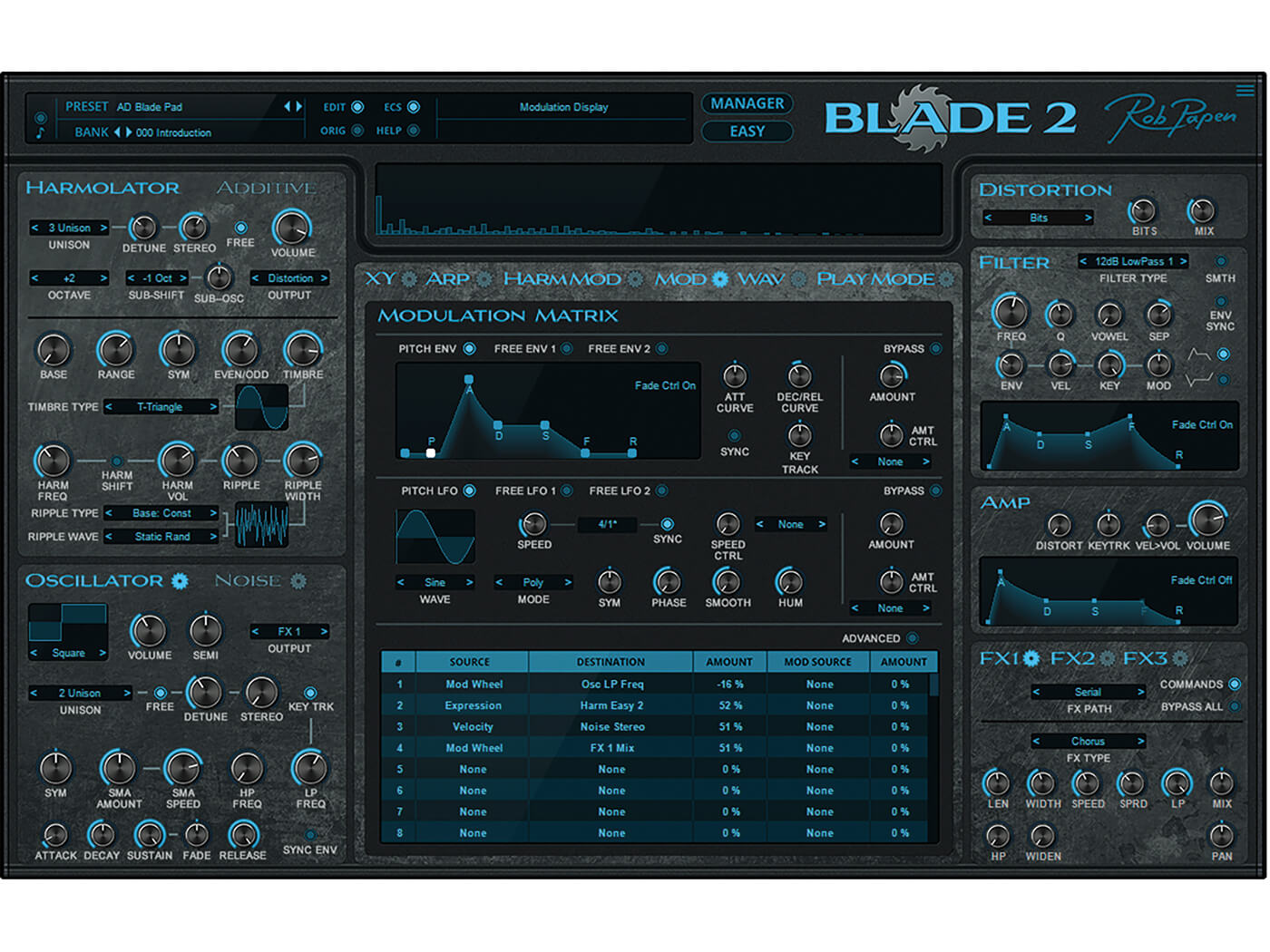 Previous users of Papen synths will feel right at home. There is plenty of familiarity within Blade 2, with the oscillator section to the left of the plug-in window, while the filter, envelopes and effects occupy the space to the right. The large central space is switchable between five different control elements, which include the arpeggiator/sequencer, modulation matrix and the infamous Papen XY panel. Directly above this, some new eye-candy has been built in, by way of a display which toggles between dynamics, harmonics and waveform. This animated feature doffs its cap to other technologies, with an almost Fairlight-like representation of waveform, rippling into the distance. It’s rather cool and gratifying, but it’s just a simple reflection of the parameters which are set elsewhere.

Talking of which, it all begins with the oscillators on the left of the instrument interface. The primary oscillator is switchable between two modes; Harmolator and Additive. Both offer sonic similarities, but are intrinsically different operationally. The Harmolator mode offers a whopping ninety-six partials, which all all employed within the single oscillator mode.

The guiding principal of additive synthesis is that each partial is a sine wave, assigned to different harmonic. Combining these partials together creates a harmonically rich sound, which in the case of the Harmolator, may be altered and tweaked in real time, to affect change in timbre. The sculpting fun begins as you alter the five primary controls within the Harmolator, which move the symmetry and alignment of the harmonic structure. The Base control, acts rather like a high-pass filter, moving the centre of lower exaggeration. This is mirrored beautifully on the letter-box waveform display, while in Harmonic mode it provides a Hawaiian-wave-like sweep as a visualisation.

The Even/Odd control will duck or exaggerate the appropriate harmonics by number, while the Timbre control radically alters the harmonic structure of the sound, by applying a secondary timbre. This is not simple layering, but a case of mixing the content of the two waves at the harmonic level. Blade 2 is equipped with well over one-hundred prescribed Timbral waves, all of which add a certain sharp quality.

To begin with, we certainly find that it’s easier to explore the effect that each parameter placed on the initial wave, without the involvement of the over-layered Timbral Wave element. The resultant harmonic onslaught, induced by the involvement of the this, is very sonically exciting however. The Vocal-style timbres are particularly interesting, with plenty of scope for ingenious sound creation. 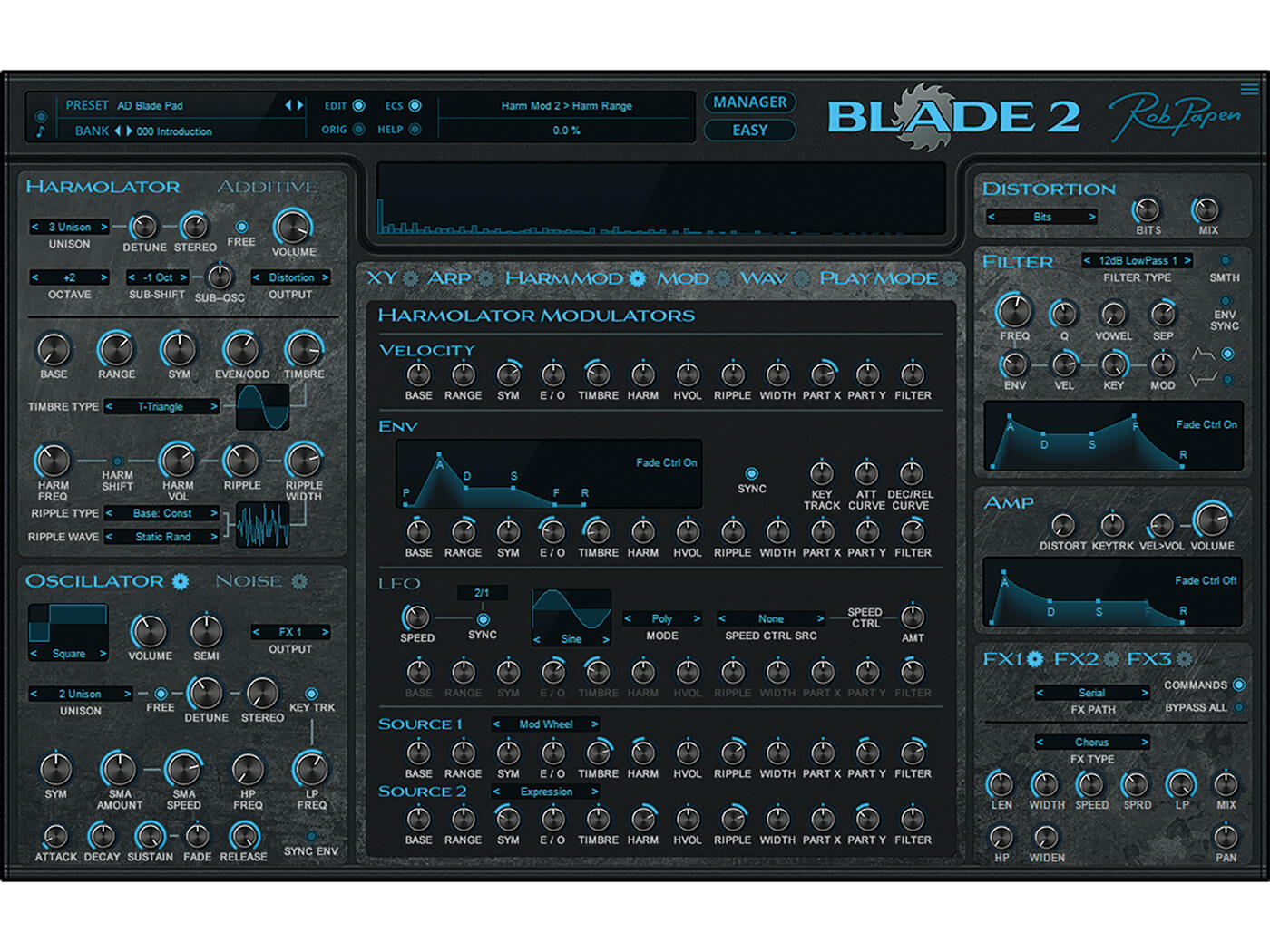 Switching to Additive mode, Blade 2 offers the ability to draw complex waveforms, in the style of a bar graph or histogram. In Additive mode, sixteen partials are available at the point of wave creation, but with the complex ability to sum up to four of these together. Each wave set is labelled A,B,C or D, with a drop-down menu to apply which combination of waves are being heard.

The Timbre set from the Harmolater is also available here, as a quick method of recalling predefined waveforms, but within this Additive setting. There is also a sub-oscillator, which may be tuned to octaves, fourths and fifths, both above and below the fundamental. The Sub-Oscillator produces either a Sine or Square wave, which is applied by turning the pot to the left or right, while also dictating volume.

As if all of this isn’t enough, the primary oscillator allows for super-saw style thickening, with the addition of up to four Unison voices, which may then be detuned. The overall effect is floor-shaking, without any alteration to the overall voice count of sixteen notes.

The primary oscillator is clearly a huge attraction within Blade 2, yet the secondary oscillator perfectly shores up those sharpened waves in a supportive role, by offering more traditional subtractive waveforms, with an extensive white noise generator. The tremendous scope for creating significant whooshes is impressive, thanks to a myriad of options for added depth and colour to the noise. 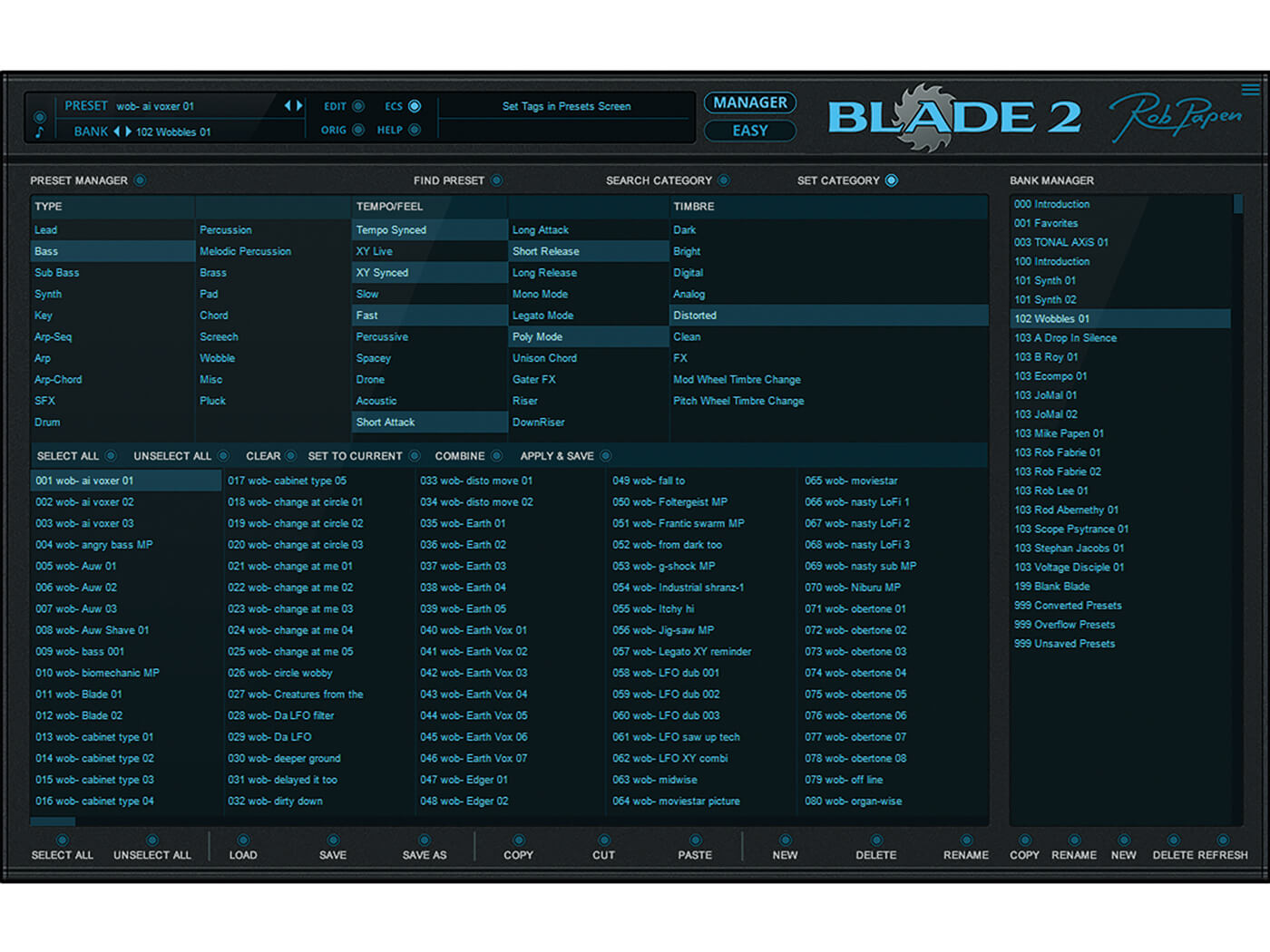 Anyone familiar with Rob Papen products will not be surprised to learn of the excellent sounding and extensive filter section, sloped from 6db to 36db, in various configurations, which include comb filtering and ring modulation. Add this to the extensive modulation matrix, the ability to draw and record realtime control and a plethora of backend effects, which includes a beautiful filter-linked distortion, and it’s another Papen success story.

In another nice addition, there is now an Easy mode, which presents all the main control elements in the most gratifyingly simplistic display, while the host of curated patches will demonstrate all that Blade 2 has to offer. It sounds very rich and distinctly huge, but unlike other Papen synths, offers significant interest and detailing at the front of the signal path, for a real rabbit-hole experience in sound creation. 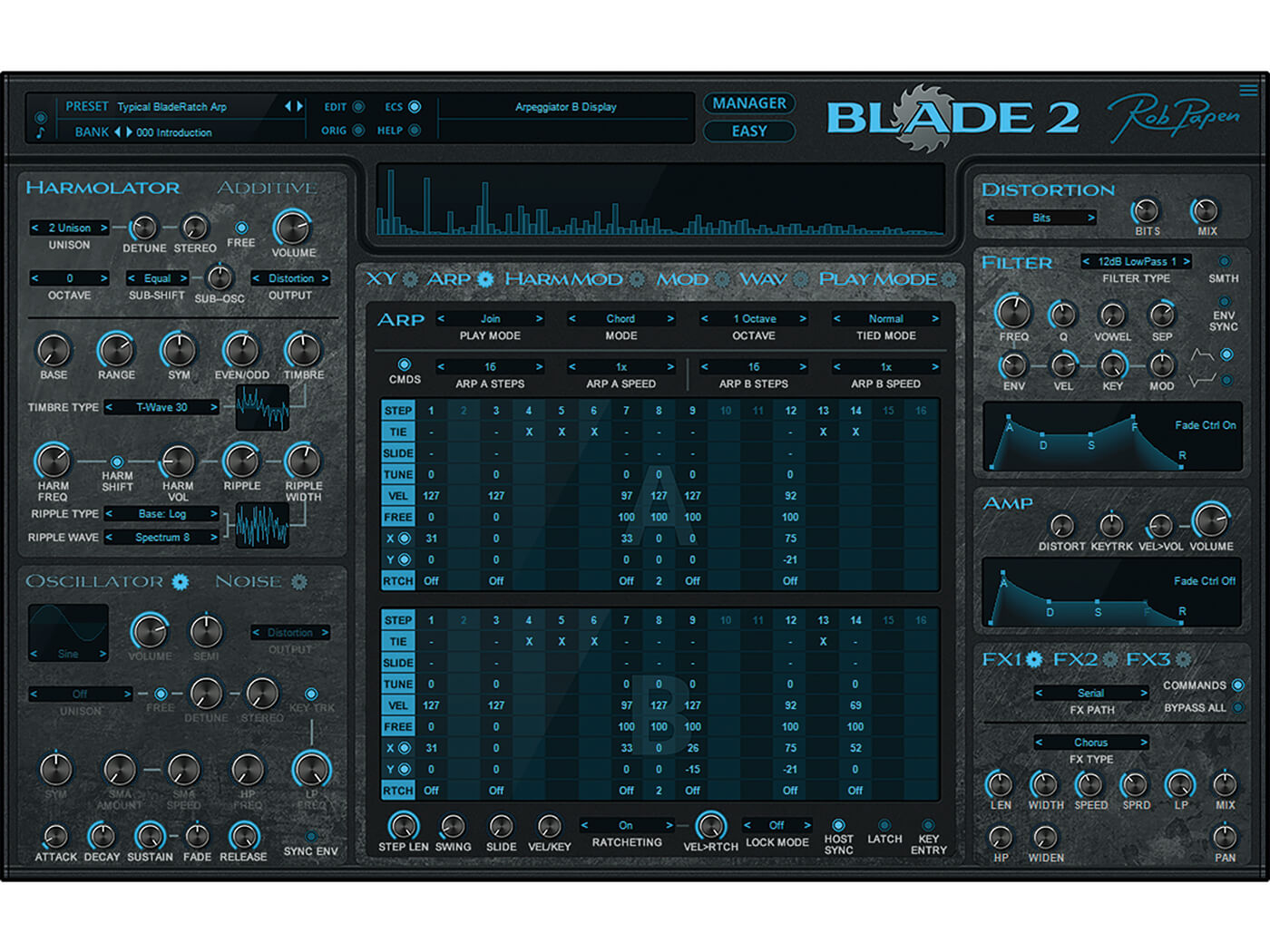 Anyone who is a Papen devotee will not be surprised by many of the offerings within Blade 2. The modulation, sequencer and XY sections all feel reliably familiar. It’s the front end that makes Blade 2 unique, with a palette which sounds sharp and clean, but can be turned to true grit with the addition of de-tuning and distortion. Without wishing to overplay something that might be considered a slightly perfunctory element, the white noise is stunning! Despite the physics, all white noise is not the same. It would be easy to overlook this humble element, yet it could become the very heart of a track, heightening interest at every build point, with a stereo spread which sounds amazing. It’s another highly impressive synth from the Papen stable, at a price which is enormously competitive.

Living up to its name, Razor provides exceptional cutting edge sounds, from a sum of up to 320 partials. It lacks the more traditional concept of filtering, largely due to the control placed at the front end. It’s an impressive and stylish instrument.

While not strictly an additive synthesis, Bolt offers a slightly different take on synthesis, by starting with a sine wave and adding harmonic overtones. It’s a unique design which allows for the addition of up to twenty harmonic overtones, resulting in some original and interesting sounding textures.