The maker of award-winning instruments MiniMonsta and M-Tron Pro has taken on one of the most monstrous analogue synths ever made: the Oberheim 8-Voice. Can OB-E be as hefty as its hardware sibling? 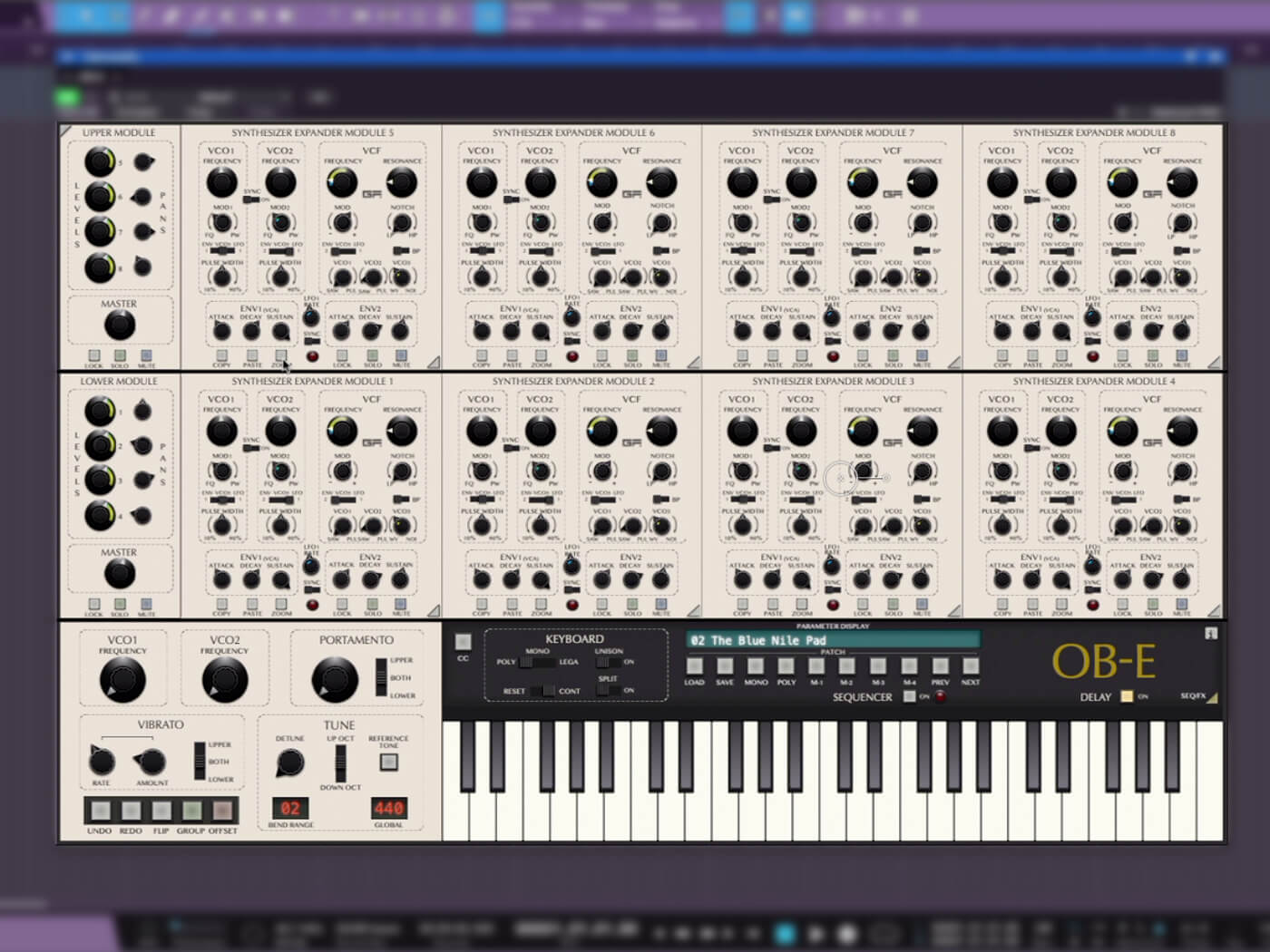 A beautiful-sounding instrument with considered performance controls and a great depth for sound design. If you're looking for the classic Oberheim sound in a modern package, this is it.

Those familiar with GForce will be excited by their latest foray into the virtual instrument world: their version of the classic SEM-loaded Oberheim 8-Voice, dubbed OB-E.

For the uninitiated, SEM stands for Synthesizer Expansion Module, which is the root of the classic, fat Oberheim sound. And, in the case of OB-E, there are eight of them. We’ll start by analysing one module, then see how they can all be tied together for some unique sound design ideas.

Each SEM contains two syncable VCOs that can deliver sawtooth or pulse waveshapes. Every module has controls for modulating the frequency or pulse width of the VCOs, and two Mod Sources (Env1 or LFO1). A simple sync switch sits between the VCOs. A multimode filter joins these controls, too.

Along with the oscillators and filter, there are two simple ADS envelopes. Selecting your desired SEM and zooming in on it or on the back panel of that SEM is very straightforward and makes programming easy.

A back panel view shows some extra features that were not available on the original SEMs, including a third oscillator (VCO3), which can be audible, or serve as an LFO which operates into the audio rate for simple FM tones. Nice!

The LFO has three adjustable waveshapes: saw, sine and square. It also sports a useful Retrigger switch that allows the LFO to restart from the same point in its cycle each time you play a key, ideal for consistent note attacks. There’s also an Intro knob that delays the onset of the LFO. Velocity and aftertouch routing options live on this panel, too, and you can assign aftertouch to five different destinations. Pretty handy!

GForce has added another killer feature: modulation indicator rings. When assigning velocity sensitivity, a yellow ring appears around the destination parameter knob and indicates the amount of velocity assigned. The same occurs when you assign aftertouch, but in a blue ring. This interface feature makes it quick and easy to route parameter modulation and decipher routings on existing patches.

You can also copy the parameters from one SEM and paste them to another, load a previously saved SEM, mute or solo, and lock the SEM’s parameters entirely.

Two mixers allow you to blend different amounts of the different SEMS in groups of four. This is particularly convenient when creating splits or when layering SEM modules for wide and moving sounds.

Where OB-E comes into its element is with its quick performance controls. These include coarse adjustments for both VCO1 and VCO2. So, for example, you could raise the pitch of one VCO to create a fifth of the other while you’re playing. This is cool in a live performance context. You can also achieve this using automation if you’re less of a live performer. There’s also portamento, which can be assigned either above or below a keyboard split (or both) for sliding between notes at any speed you choose, for classic lead and bass sounds – another fantastic performance tool.

The tuning section gives you a reference tone (A440). You can also set the whole lot an octave higher or lower with the OCT switch. Detune is a fun feature that lets you detune each SEM a little – or a lot. Used judiciously, this can add an authentic, slightly wobbly vintage tone to your sound. Overdone, it can make things sound pretty ugly, which can be practical for creating dissonant tension.

The undo and redo buttons are a godsend. Although this function is pretty commonplace now (Arturia’s SEM V2 has it), it still bears a mention. Notably, it’s a functional improvement over the hardware that encourages experimentation and means you’re never more than a few clicks away from safety if your sound designing goes sideways.

The ability to group SEMs is an obvious advantage over its hardware counterpart, too. When paired with the parameter offset controls for making minor variations from one module to the next, and the lock module feature, the benefit for quick sound design is massive.

One minor frustration is that you have to remember to unlock these SEMs before loading new patches, or they will remain locked and can ruin your patchwork. I’d love to see some kind of indicator or popup that says that you have SEMs locked (so you are at least aware of it).

Keys to the kingdom

The keyboard section of OB-E has controls for playing in Polyphonic, Mono or Legato modes, as well as in Unison. And GForce has made splits super easy. Just hit the Split button, grab the Split Arrow (at Middle C) and drag it where you want it. Now you can have, for example, a bass sound in the lowest octave using two of the modules and a pad or arpeggio across the higher octaves using the remaining six modules. Or a pad sound in the lowest 3 octaves and a lead in the upper. There’s no doubt, splits on OB-E supercharge the synth’s playability.

There are over 600 excellent patches from basses to pads to polysynths – from chords to plucks to split patches and arpeggios – that are provided to get you started making many kinds of music. The sound of OB-E is not limited to vintage synth-rock, either. You can easily incorporate these sounds into multiple forms of modern electronic music.

Helpfully, along with a simple delay for adding a bit more life to your patches, there’s also a simple, yet functional sequencer. It’s very easy to use and can help quickly put ideas together or add interest to a performance.

OB-E is, quite simply, brilliant. The emulated analogue filters are rich and smooth, and the oscillators are fat and punchy. Critically, the performance controls and ease of programming make it enormous fun to use. It also makes getting excellent sounds swift and efficient.

It seems as though the team at GForce really have made an 8-voice monster with that classic Oberheim sound. In the hands of virtually any synth enthusiast, OB-E is capable of earth-shaking basses, massive and impossibly wide pads, and lead sounds big enough to reach the halls of Valhalla. We can’t recommend it highly enough.