The Symphobia series from Project SAM receives a much anticipated fourth volume. We open up the box and create some impact. 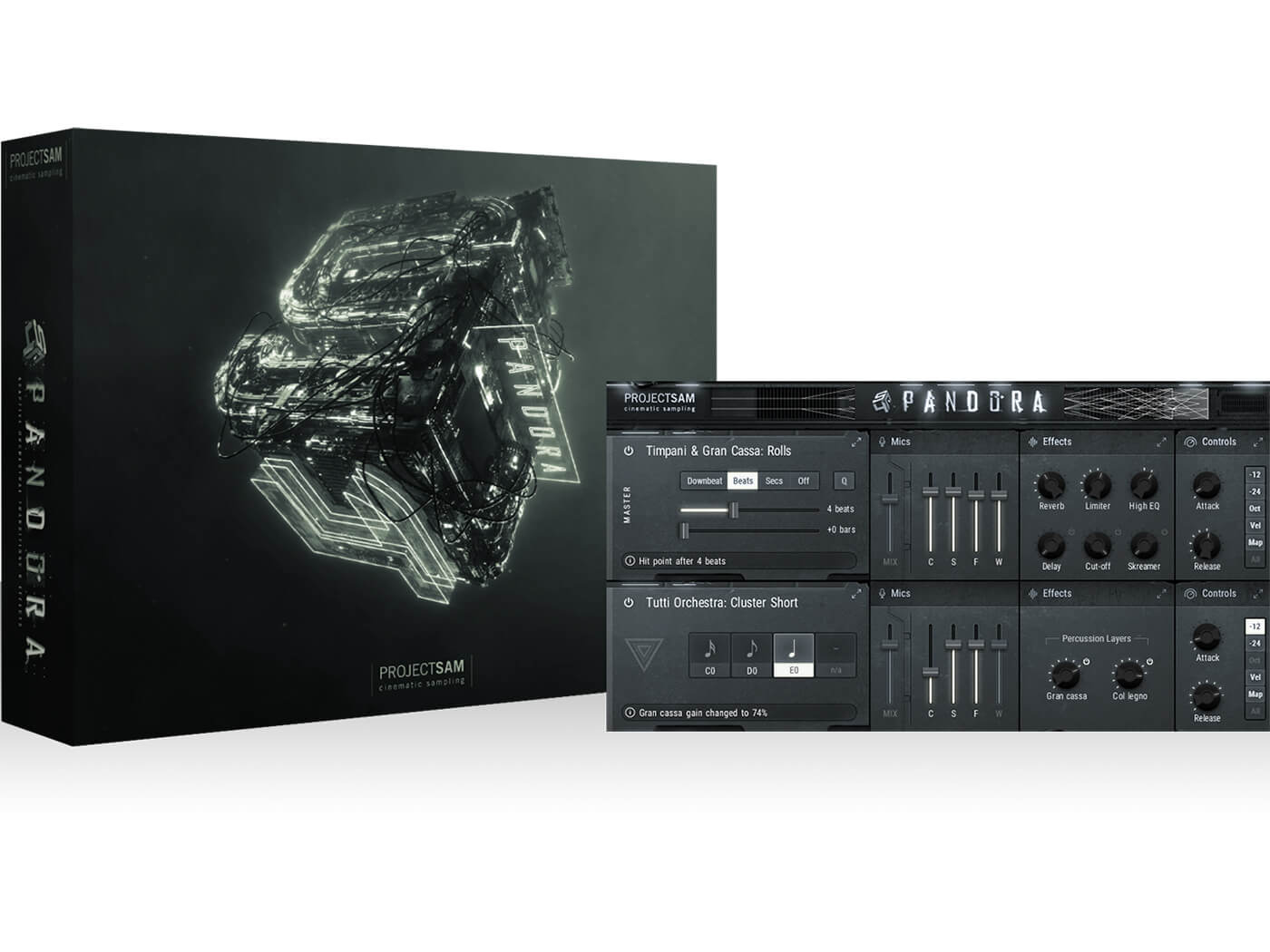 A few years back, there was something of a revolution in orchestral sampling, with Project SAM quickly becoming one of the first companies to infiltrate the soundtrack market, with a stunning collection of libraries from a newly formed catalogue. The True Strike packages were a case in point; large forces of percussion were assembled and recorded to their fullest extent. Barely an action cue went by without there being a gong scrape or other from their instantly identifiable and iconic library, but meanwhile, the Symphobia series was also getting underway, inspiring composers and producers with a wealth of out-of-the-box content, all designed to make life easier and sound better.

The first question we have for Project SAM is, why has it taken so long to follow up the first three packages in the series, with a fourth? The answer, it would seem, is probably to do with the wealth of timing technology which forms part of the mainstay with this library, although the substantial 140GB of content must have also taken considerable time to organise.

Project SAM has also nicknamed this volume Pandora, presumably harking back to Greek mythology, and the opening of the mythical box, but while this might be the case, the musical ramblings that emanate are supported by a pretty heavy duty set of samples that are perfect for action cues, trailer music, even extending to horror cues.

Patches are organised across seven distinct areas, with the first being a collection of Multi’s, named as Combos. If you’re looking for instant gratification, and for the most part a considerable amount of impact and volume, this could be a suitable starting point. No surprise then that one of the first patches is labelled ‘Braaaaam’, which describes a sound that has well and truly dominated soundtracks over the last decade. 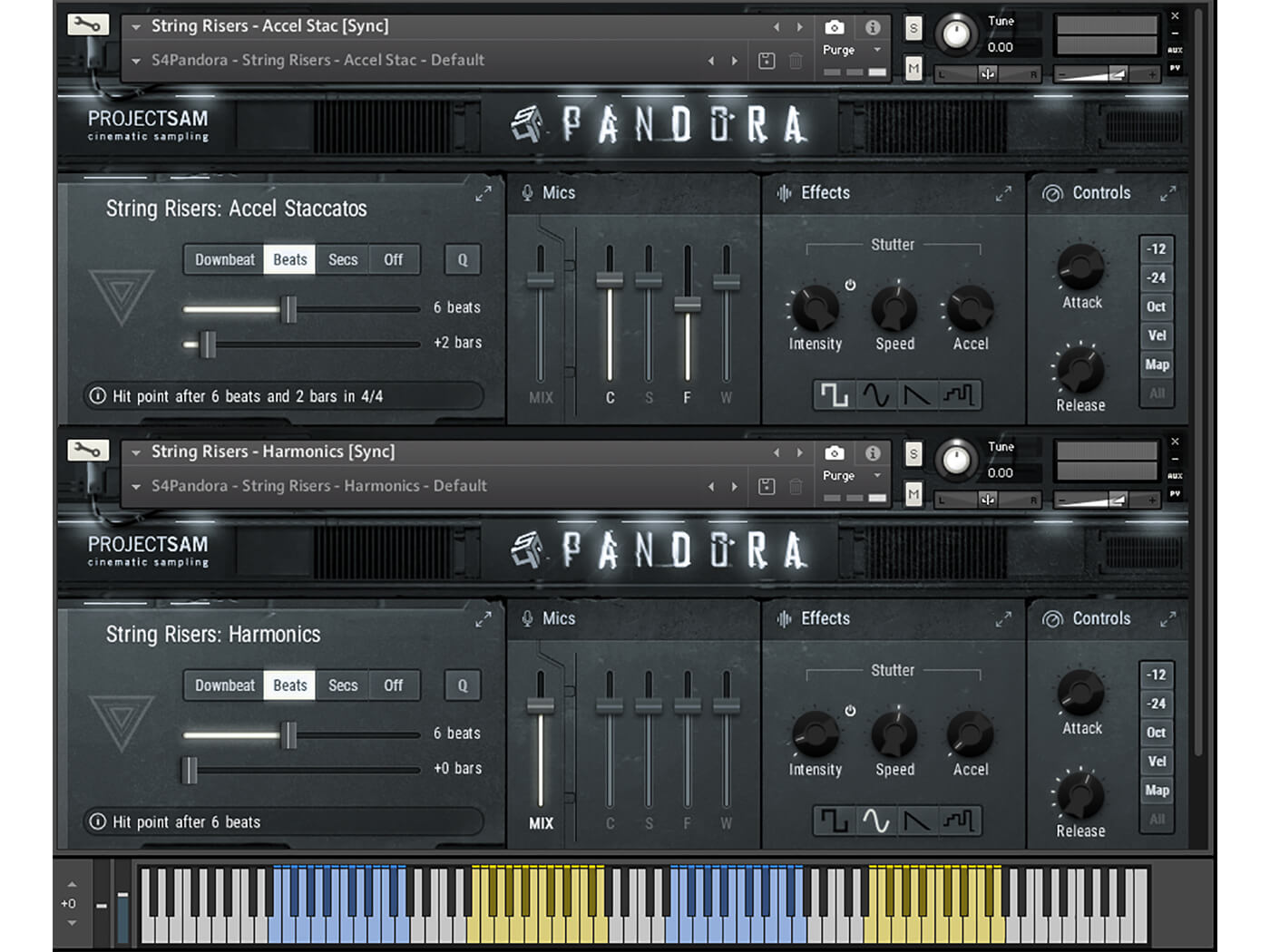 This is a large collection of lower brass instruments and players, who are literally blowing seven-shades out of their instruments, producing that brightness of tone, which can only be maintained for a few seconds, as any player will run out of air quite quickly. It is unbelievably effective, and thanks to the three part combo configuration, offers a sizeable accent up front, with large sustain to follow. The tail end of the samples can be a little ragged, but then the front is going to matter far more, and it’ll also add a degree of realism, in terms of humanistic performance.

By way of similarity, the P for Pandora patch offers similar credentials, but with a great big slamming Gran Cassa (type of orchestral bass drum) up front, while the associated brass diminuendo away perfectly from the attack point. Very effective indeed.

Proving that it’s not all about the volume, another patch example, which is named Ghouls & Ghosts, offers considerable sectional meanderings, from strings, horns and low winds. It moves around the pitch centre in a slightly woozy way. What’s helpful and actually quite creative, is the ability to isolate individual elements in each combo, while also allowing for the ability to hone in on sections with the four different available mic’s, although the main Mix does sound pretty fine, straight out of the box. It’s through this sort of solo functionality that you’ll find some real gems, such as the Horn: Bending Note Swell sample, which has a wonderful sense of eerie horror, reminiscent of those wonderful original Star Trek scores, by Alexander Courage. 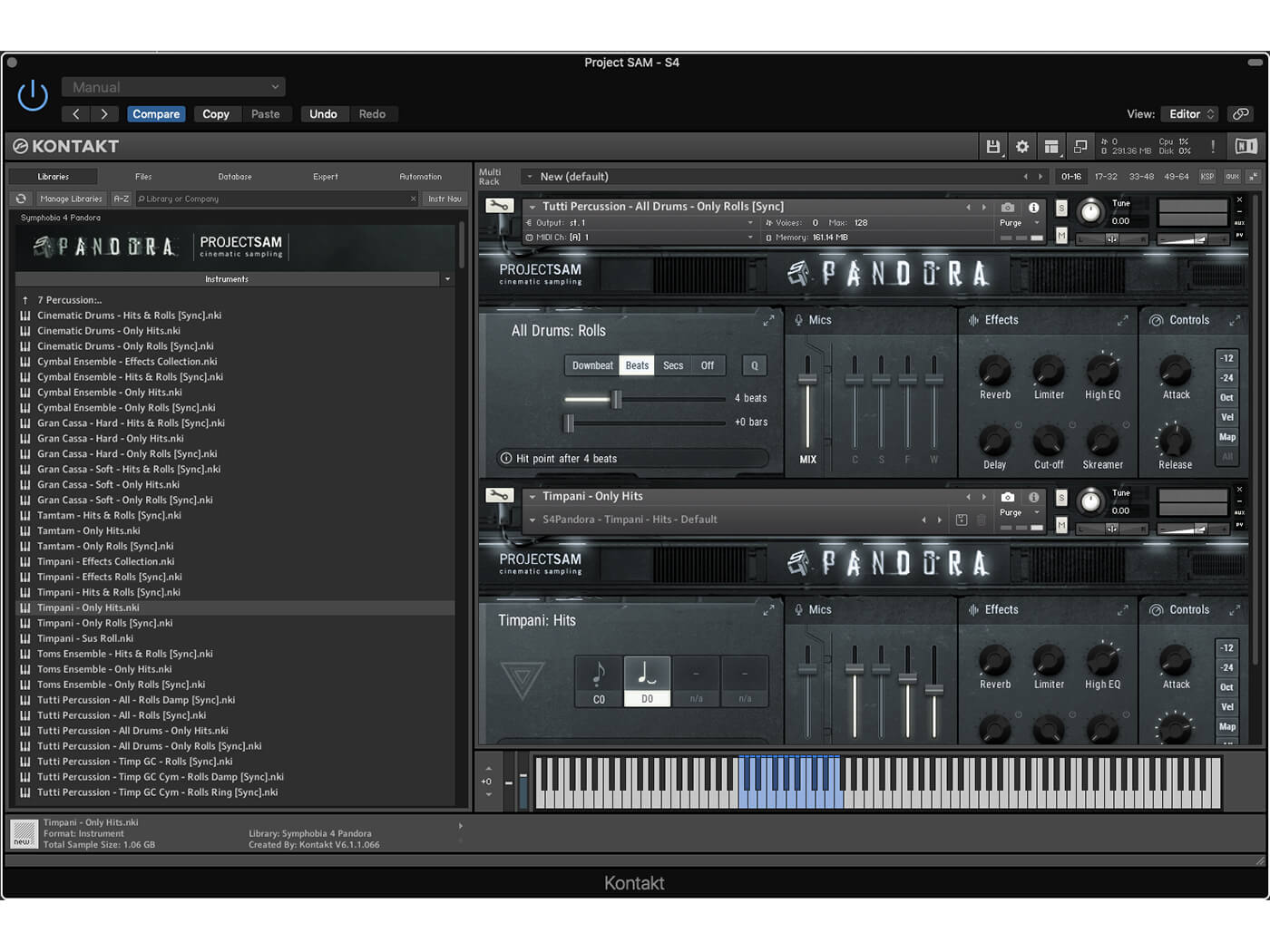 One area of offered patching that could become indispensable, is the category of Risers. As the name suggests, many of these sampled elements exist to quickly provide crescendo-like support, to create tension, although the name in itself may mislead, as seen with the patch name String Downers, where notes clearly fall rather than rise. In any case, the effect quotient is off the scale, even more so when you consider the technology which is placed at the heart of Symphobia 4, which allows the user to dictate the length of rise and fall, as a number of beats or bars. Setting any of these risers to eight beats, the delivered performance will not disappoint, with each crescendo to a downbeat falling just behind the time, making it suitably musical and particularly useable.

Part of this technology allows for the setting of a number of bars, and in doing so, slightly outlandish builds can occur, which still sound highly convincing, despite the slowed tempo construct. Alongside this more outlandish element, the Effects section offers much more than the usual delay and reverb styled effects, although these elements are also included. The Stutter effect allows for an extremity of volume modulation to be applied, turning a string riser into a pure sci-fi experience, even more so if used alongside the Accelerando control, where the stutter rate will increase with the rise.

It’s got that ‘Hollywood soundtrack’ feel all over it, while being very easy to control and use, which in itself may extend to overuse. In fact, that is one danger of a library such as this; there are so many really good elements, you have to be careful not to overuse them musically. Nothing sounds as bad as an overused and exploited effect, and as many of these effect-based samples might be considered as one-shot wonders, you have to be a little careful with your deployment, stunningly good as they sound. 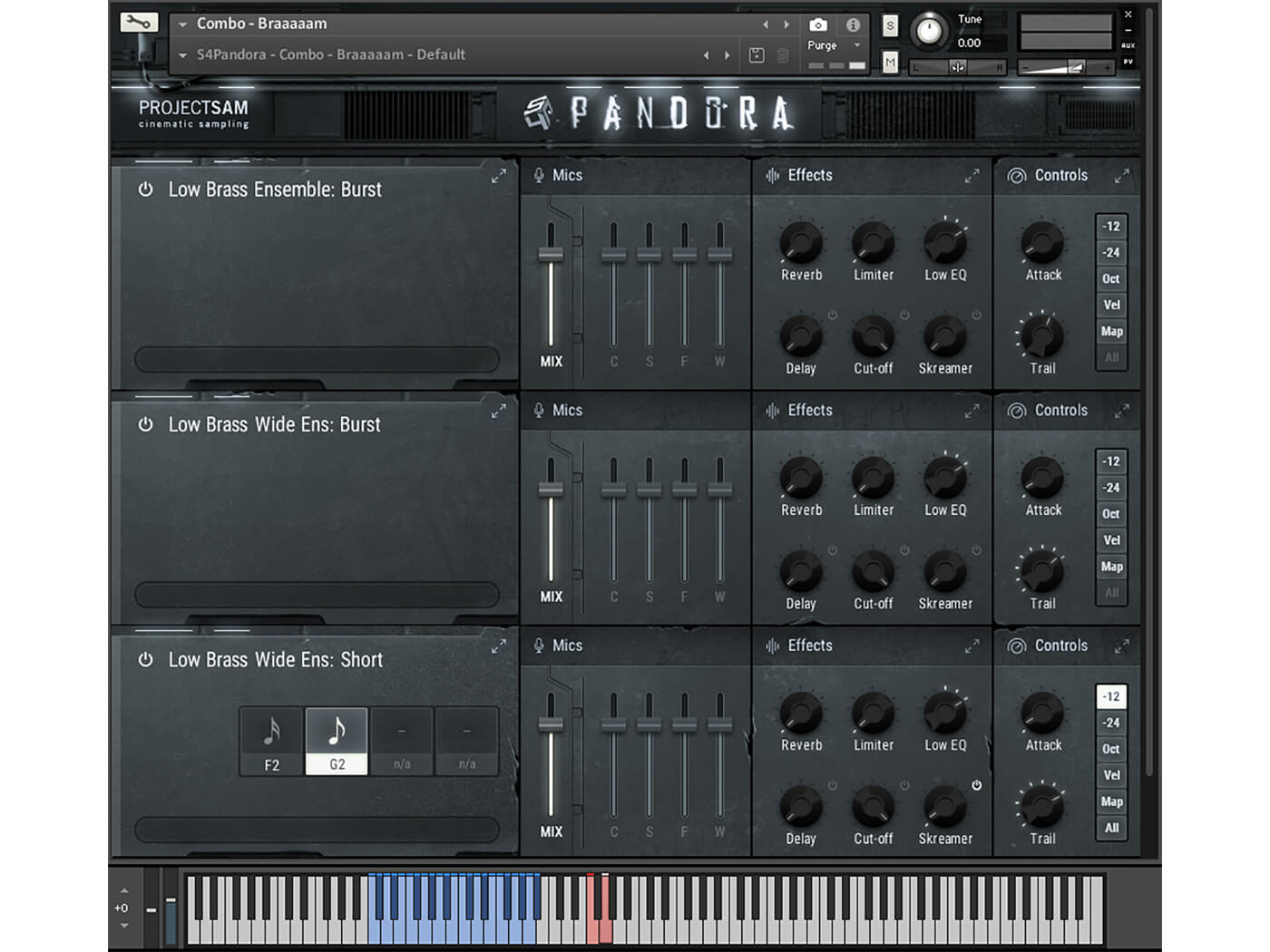 With further exploitation of Project SAM’s timing technology, the Pulses patches will heavily pulse to a prescribed note value, in forms of clusters and straight tones, spread across the wind brass and strings departments. Many of these offer pre-prescribed triadic or chordal forms, which can make them feel a little restricting musically, but the performance aspect is solid, with occasional moments when articulation might humanistically wander. Strangely, and slightly disappointingly, only the strings are open to Tonal Pulsing, where you can play out a chosen harmony, which I do feel is a bit of a limitation. It would have been nice to have had this element of control in the brass and winds, meaning that you have to make do with the prescribed content.

Elsewhere, there are high levels of very useable content, such as the vast amount of percussive content, where you can hear the echo of True Strike, and sonically, this library has plenty of excellent calling cards. For quick, stylised and really helpful tools that might be required by composers and producers working with action, horror and sci-fi, it really is very useful, but it does lack the ability for harmonic control, across all sections of the library. Despite this set back, the timing functions are incredibly easy to use and very effective, offering a significant strength, being a huge boon to workflow.

It’s important to take on board that Symphobia 4 is an add-on volume, to an already fine series of orchestral libraries. If you are looking for patches to play sweeping melodic material, or gentle rolling muted-strings, you’re firmly in the wrong place. Pandora’s content is very much about orchestral effects, which extend from long/loud and over-blown ‘Braaaam’ style samples, to outlandish string, brass and wind effects, that make up a really useful palette, but not for everyday use, unless you happen to score an awful lot of action trailers or horror flicks.

The timing elements are really good, and highly effective, but you won’t want to overuse these, otherwise you’ll find that it’ll become obvious that you’re using the same sample trick over and over again. Sonically, Symphobia 4 sounds excellent, with some of the effects elements adding a further contemporary edge to its musical musings. 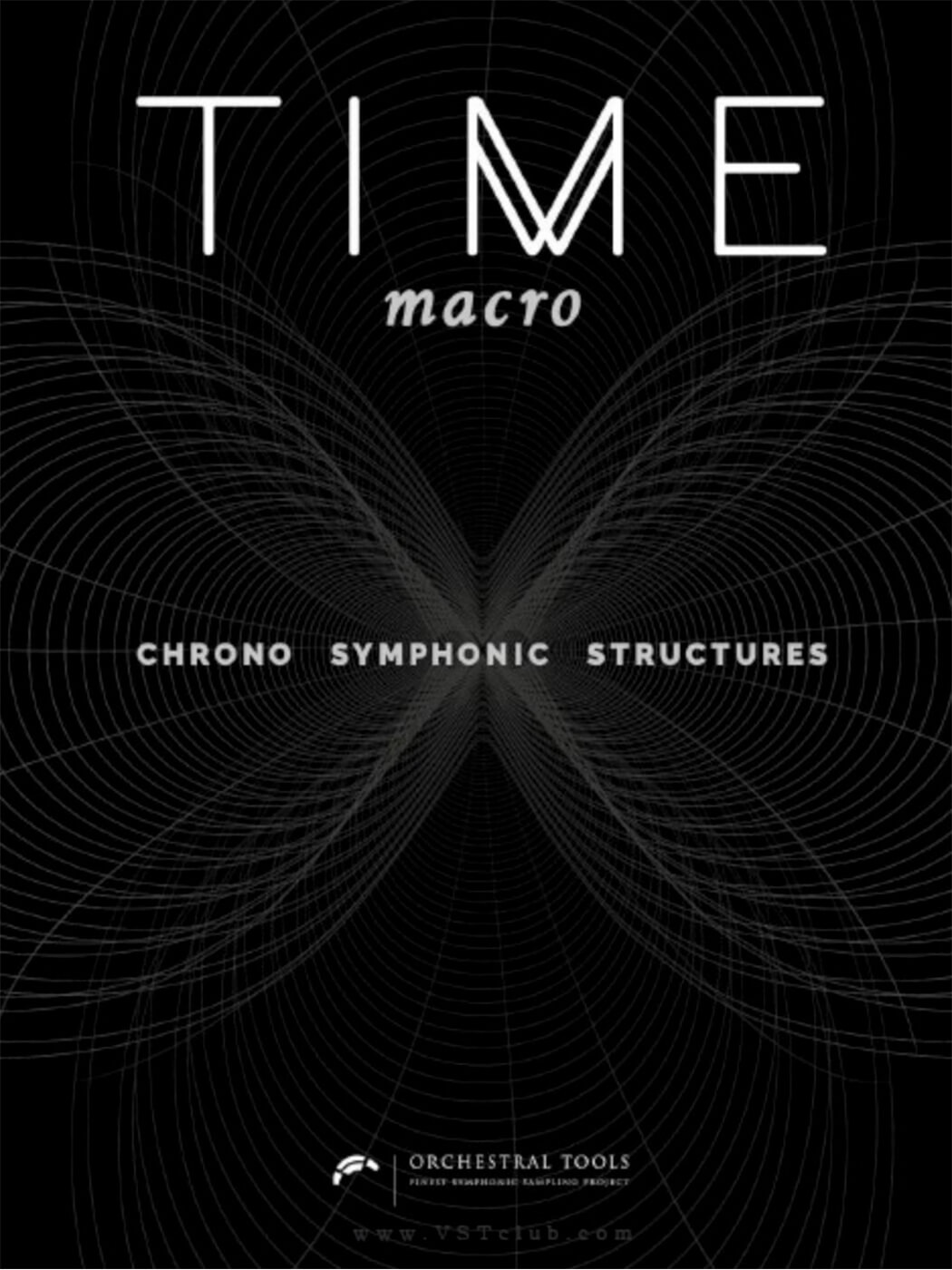 A large scale orchestral library that offers various options for creating pulses and builds, designed to clock directly with your DAW. This package from Orchestral Tools also offers choral elements, alongside strings, wind and brass. 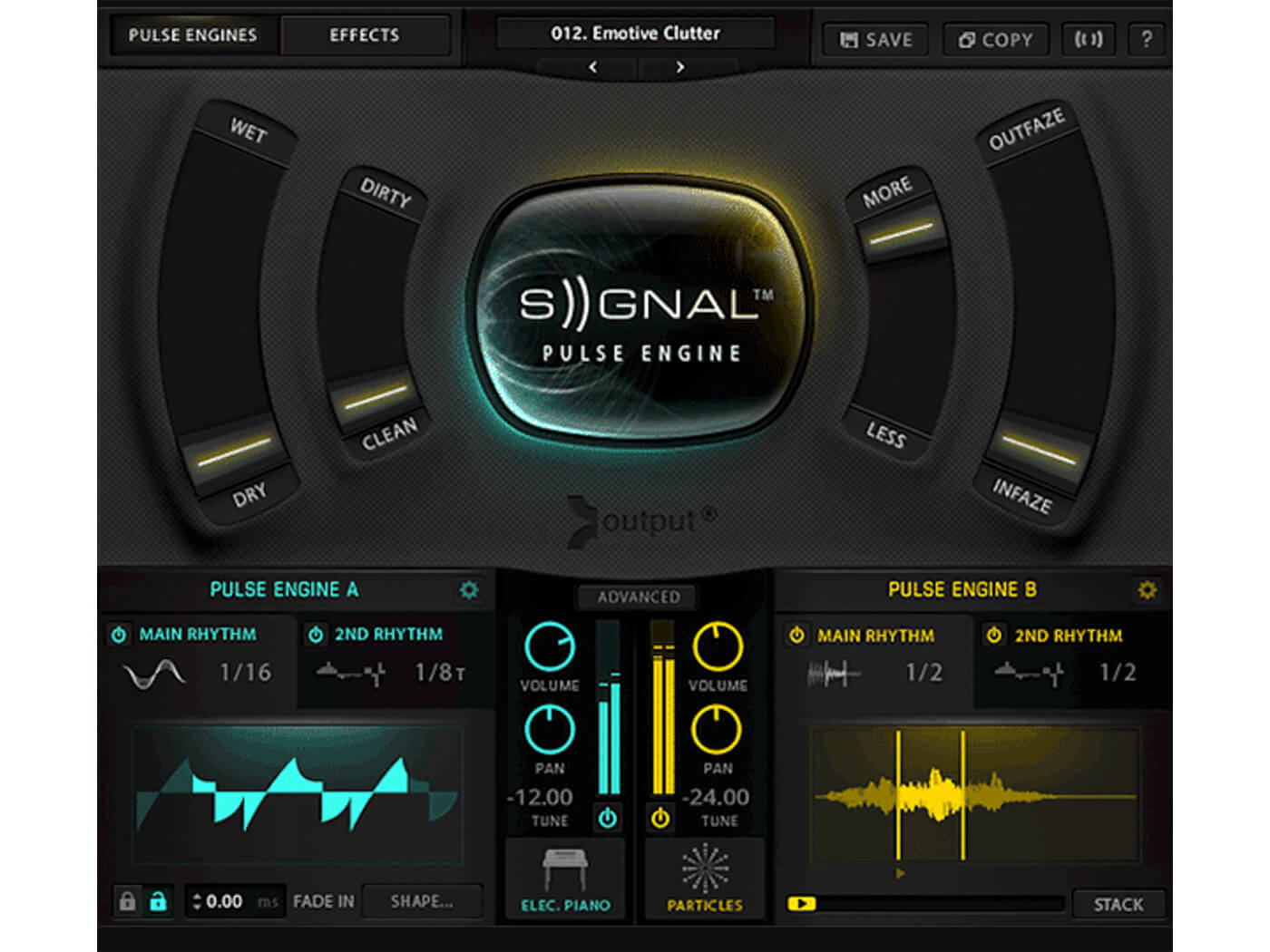 Something of a stalwart for creating pulses and beds, Output’s synth ships with numerous patches and a great ability to create all manner of interesting polyrhythmic beds, with plenty of control elements available, for real-time builds.