With a host of editable features and an intriguing Particles Engine, Native Instruments’ Noire is an inventive look at the Concert Grand piano. Time to tickle the ivories… 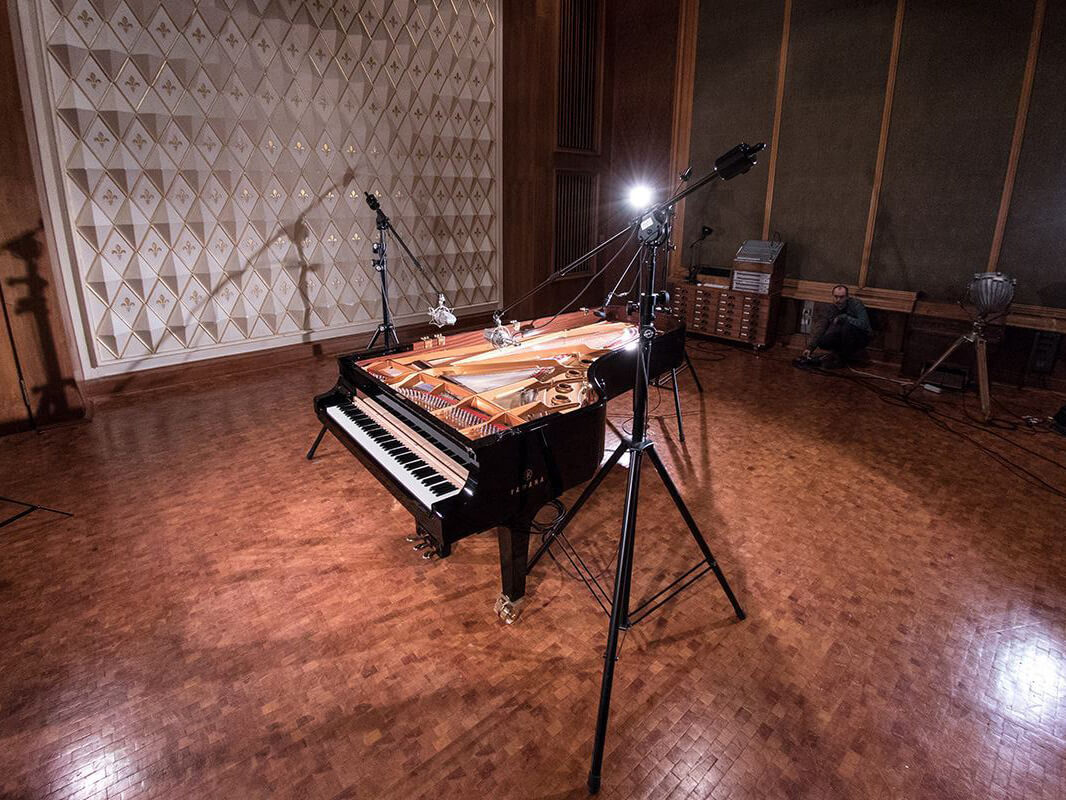 In a search for the ‘perfect’ sampled piano, it would be fair to say MusicTech has worked its way through a plethora of virtual instruments over the years. Certainly, there are plenty of virtual pianos to choose from, but few manage to deliver that perfect combination of an instrument that deserves to be sampled, alongside the technical know-how that takes full advantage of modern software samplers. All too often, it’s either the quality of the instrument itself, or the proficiency of recording and sampling, that leaves us feeling somewhat underwhelmed by many of the options available.

Rather than being ‘just another’ piano library, therefore, Native Instruments’ Noire piques our interest for several reasons. Firstly, the instrument itself is Nils Frahm’s own Yamaha CFX grand piano, recorded in Saal 3 studios as part of the Funkhaus recording complex in Berlin. Nils, of course, has built an enviable career as both a composer and performer, with the piano often featuring as a cornerstone of his music. Secondly, the library itself was developed by Galaxy Instruments, whose previous products have included Una Corda (also created in conjunction with Nils Frahm), Rise & Hit and Thrill – all highly respected and technically impressive Kontakt libraries. 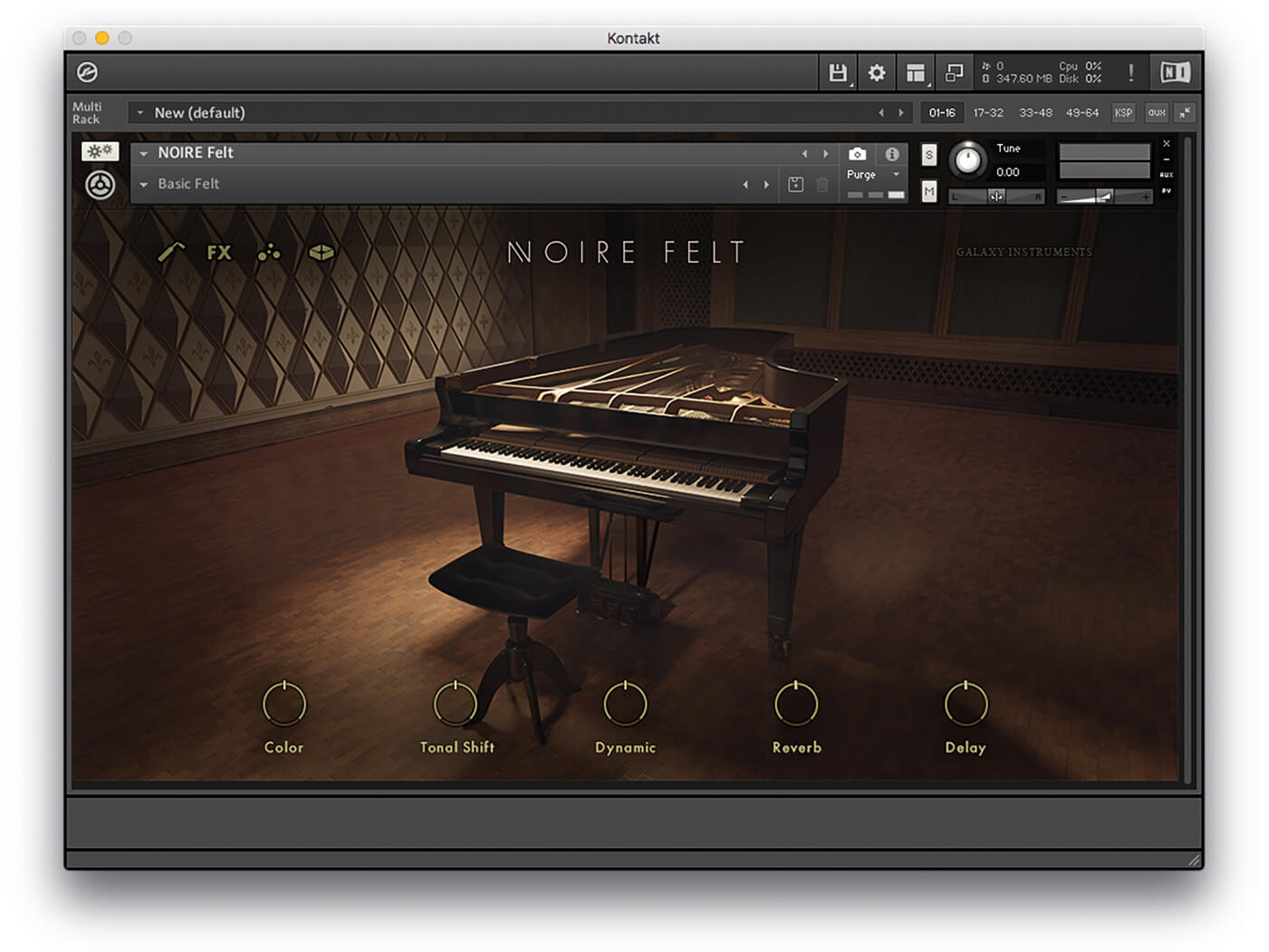 The Noire instrument is presented in two principal forms – a Pure version that offers the piano in an unadulterated form, and a Felted version that modifies the action of the piano using a layer of felt. If you’ve used Una Corda, Native Instruments’ previous collaboration with Nils Frahm, you’ll already be familiar with the felted piano sound. In effect, the felt creates a form of muted piano sound that’s perfect for quieter, intimate piano parts. Within each instrument, you’ll also find a wealth of presets that then further process the basic piano samples, demonstrating the full musical dexterity of the instrument.

In their basic form, both pianos (Pure and Felt) sound balanced and musical throughout their entire range – rich and powerful in the low-end, open and transparent in the upper octaves – as well as being a dynamic and responsive instrument to play. One possible criticism could be the lack of microphone-mixing options, something that can really aid setting the ‘perspective’ on other libraries, although this often comes at the expensive of the footprint of the library.

Though Noire exhibits a sense of ‘room’ courtesy of Saal 3’s acoustics, it isn’t a concert-hall sound that often features on orchestrally orientated libraries. Of course, the inbuilt reverbs can remedy this, but nothing truly replaces the sound of a Concert Grand in a full-sized hall. 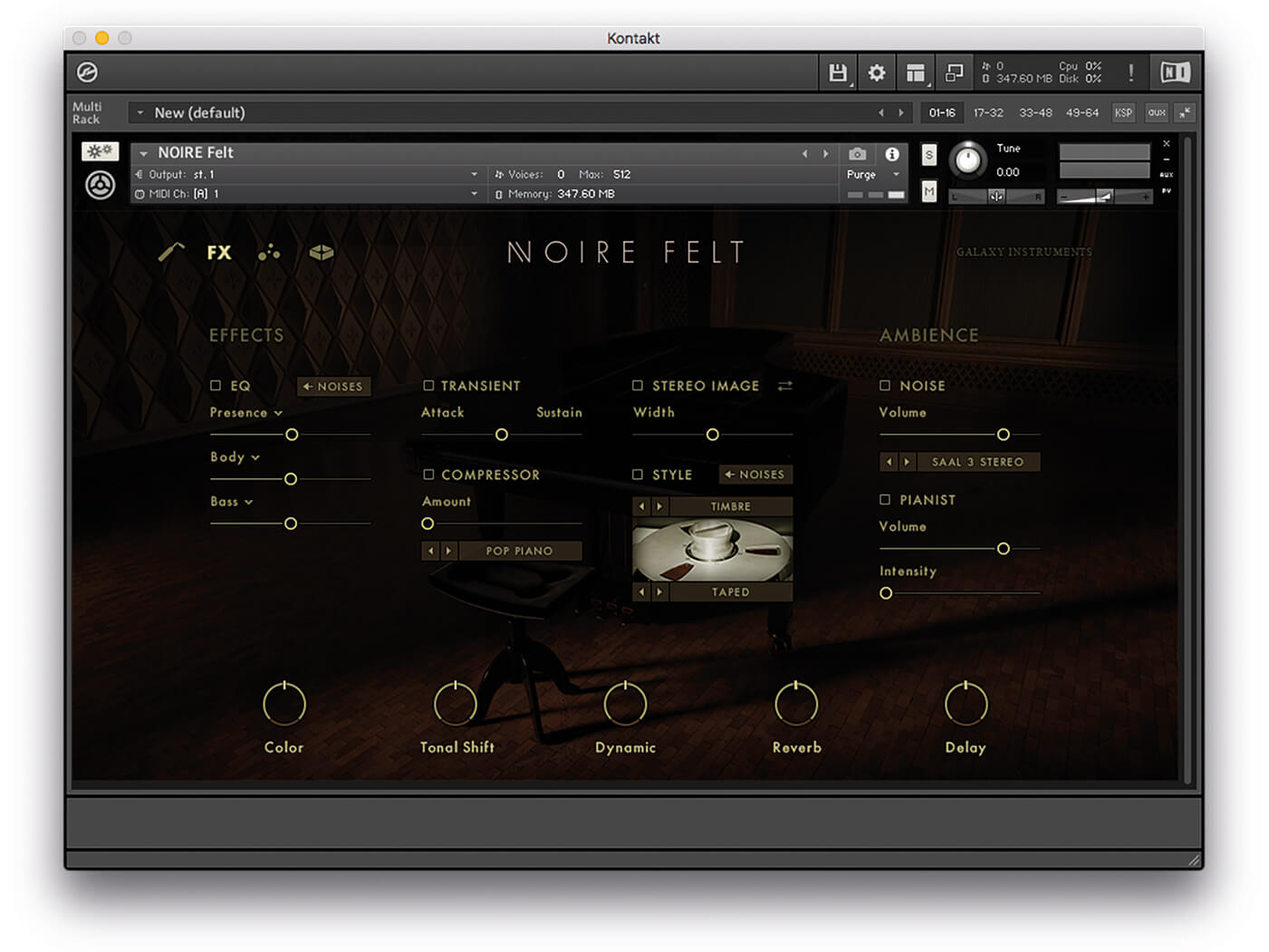 On the top level of Noire, you’ll find a collection of handy macro controls, some of them more immediate than others. Delay, Reverb and Dynamic are straightforward enough – either controlling the send levels through to the internal effects, or the responsiveness of the instrument. Color and Tonal Shift seem innocuous enough, although they have a big effect on Noire’s musical dexterity. Push Colour harder, for example, and the instrument becomes noticeably brighter and poppier, while Tonal Shift changes the piano’s formant properties. Both controls relate to some clever modifications of the sample mapping, and really help in situations where you want the piano to sound more upfront.

Undoubtedly, Noire sounds good in its pure form, but delve a little deeper into the Piano Edit Page, and you start to realise just how versatile the instrument sounds. The Piano Edit page is where you get to manipulate the ‘other’ sounds – Resonances, Overtones, Felt noise and so on – that add to the organic realism of the instrument. Add these to the Pianist Noise found in the FX page, and you really start to hear how the instrument works in a neo-classical or post-minimalistic setting as epitomised by Nil Frahm, Max Richter and Ólafur Arnalds. What’s great it how controllable these elements are: moving from an intimate, ‘creaking’ piano sound to something that still sounds characterful, but in a more musically transparent way.

One of the more intriguing additions to the Piano Edit Page includes the Sub control, which activates a set of samples recorded with a reverse-wired NS10 speaker. The result sounds similar to a sine wave layered under the root notes, although given that it’s sourced from the piano itself, the Sub layer seems to sit in a more natural way. As with all of these extra sound layers, their effectiveness is in their ability to complement and characterfully enhance the core sound of the piano, rather than just being a gimmicky addition.

The game-changing feature, which will undoubtedly garner the most interest, is Noire’s Particles Engine. The Particles Engine is a sophisticated algorithmic performance tool that triggers additional samples in relation to the notes that you play. A single C3, for example, could trigger a rhythmical collection of piano notes played on brushes, or an almost pad-like wash that sits behind the piano sound. The Particles Engine Edit Page lets you define the Algorithm, setting note density, octave spacing and so on, as well as different sound sources such as Plucked, Brush or Mallet. 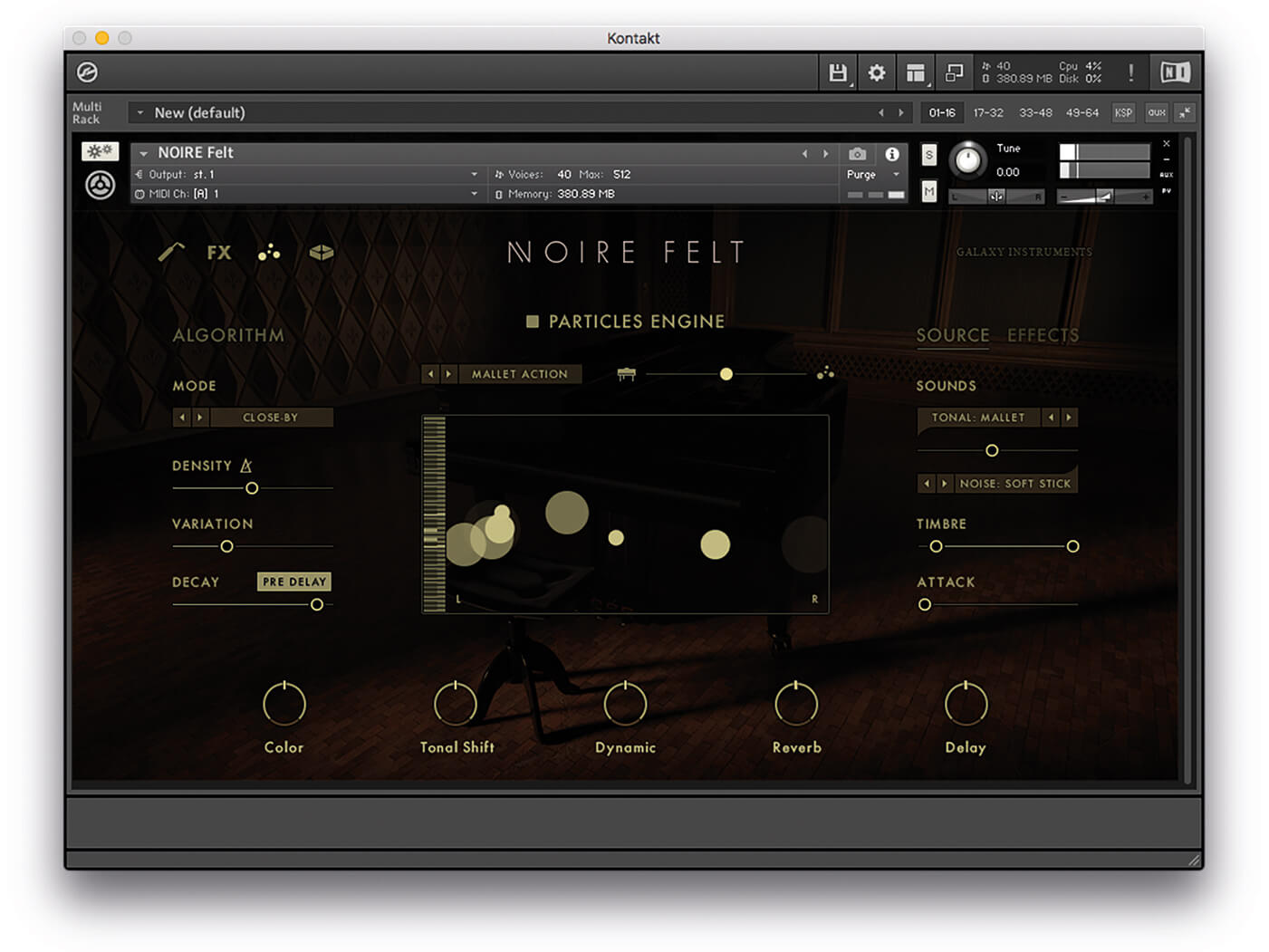 The Particles Engine is a great example of how sample-based instruments are exploring creative ideas that go above and beyond what a real instrument can offer. Just a few years ago, a piano library could have sold itself simply based on its specs – 127 discrete velocity layers, nine round robins per note, and so on – whereas nowadays, you can see that a greater amount of effort is being expended in the creativity of the sampling process. The Particles Engine is an instantly inspiring tool, providing harmonic and rhythmic interest to even the most basic of piano parts.

So, the inevitable question here is whether Noire represents that elusive ‘perfect’ piano sound we’ve been searching for? Well, Noire is certainly one of the most inspiring sampled pianos we’ve ever played, both in respect to the musicality of the core instrument, but equally, in additional features like the Particles Engine that go above and beyond what you’d typically expect from a sampled piano.

In many ways, Noire is the culmination of Galaxy Instruments’ years of experience sampling pianos (including the aforementioned Una Corda, The Giant and the Definitive Piano Collection), delivering a virtual piano that sounds great and plays beautifully.

Of course, the closer you get to perfection, the more you release that it doesn’t just reside in one instrument. Having a range of different pianos, each bringing its own unique character and charm, is much better than a ‘jack of all trades’ solution. In that respect, Noire’s unique and defined sound make it a really enticing proposition, not least because of its slant towards modernity. That said, Noire is still ably versatile to span genres – nimble enough to move between pop, jazz and classical – making it an ideal choice for anyone wanting to invest in a high-class virtual piano.

Most of us now have access to a sample-based piano, either as part of Native Instruments’ Komplete 12 (which includes Una Corda, The Giant and The Definitive Piano Collection) or as part of your DAW’s included sound content. For the occasional piano part, these instruments can often perform well, although you may find them less suitable if your piano becomes more exposed. One clear advantage is the quality of the original instrument, something that really shines with the dynamic and timbral range of the instrument.

What makes Noire really distinctive, though, are the controllable additional noises (which are definitely on-trend with many contemporary classic works) and the Particles Engine. The combination of both these features set the instrument apart from other piano libraries, and, most importantly, make it a pleasure to play. 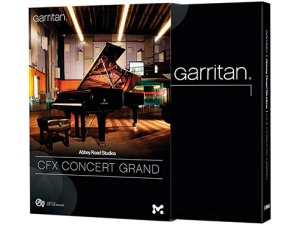 Totalling over 150GB, the CFX Concert Grand is the audiophile choice for those that like lots of control over the choice and position of microphones. It’s a great choice for classically styled piano, largely thanks to the expansive sound of Abbey Road Studio One, where it was recorded. 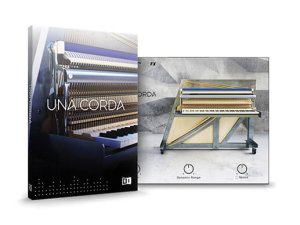 If you’re mainly after the felted piano sound, it’s also worth looking at Una Corda. The Una Corda is a unique piano-based instrument, based on a single string per note. The sound is purer than a conventional piano, giving the instrument a distinctive, modern sound.